All Aboard Harvest | A Working Vacation
13485
post-template-default,single,single-post,postid-13485,single-format-standard,qode-quick-links-1.0,ajax_fade,page_not_loaded,,qode-title-hidden,qode-theme-ver-11.2,qode-theme-bridge,wpb-js-composer js-comp-ver-5.4.7,vc_responsive

Matheson, Colorado –
We finally made a decision and there’s no turning back now.

Weather began playing against the “plan” we had. The plan was immediately after we finished the wheat in Colorado, we were going to make our way to the San Luis Valley for the barley harvest. Then the monsoons moved in. The plan started taking a different course of action. The swathing dates for the barley kept getting pushed later, which meant picking it up got later. The question going through Jim’s mind has been “Do we gamble with the weather and head over the pass and count on a short run? Or, do we play it safe and stay where we’re at?” The reason he was starting to second guess what we should do is we’re planning on helping with the proso millet again this year. Right now (and we all know plans can change), a date has been set to “possibly” begin picking up proso September 1. That doesn’t leave much time for us to make the trip to the valley (three times) and back (three times).

When I was finally given the chance to give him my opinion, I told him I thought we should just gamble and head over the pass. We’re here…we have a combine…we’re supposed to be using that combine…and we’re usually in one place for ten days to two weeks before moving. So, we made our first trip yesterday afternoon with Frank and Pete (our trucks). I had no idea what to expect. 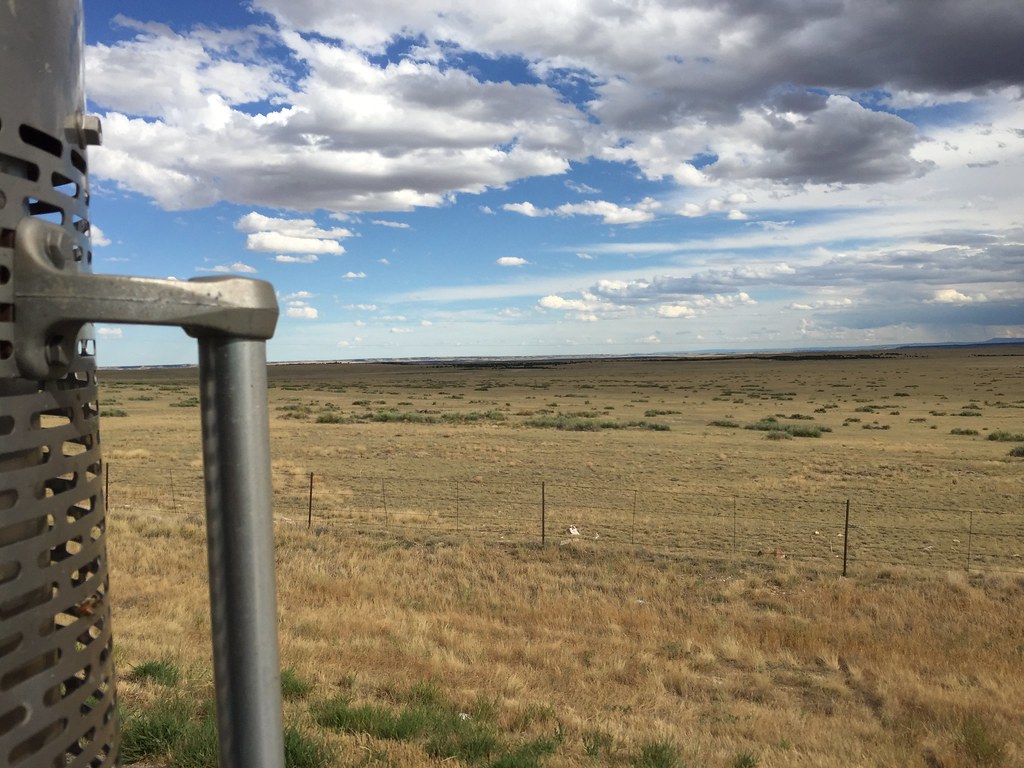 The countryside from the farm to LaVeta is desert. It was HOT and the air was dry. My eyes and nose literally had every bit of moisture sucked right out. 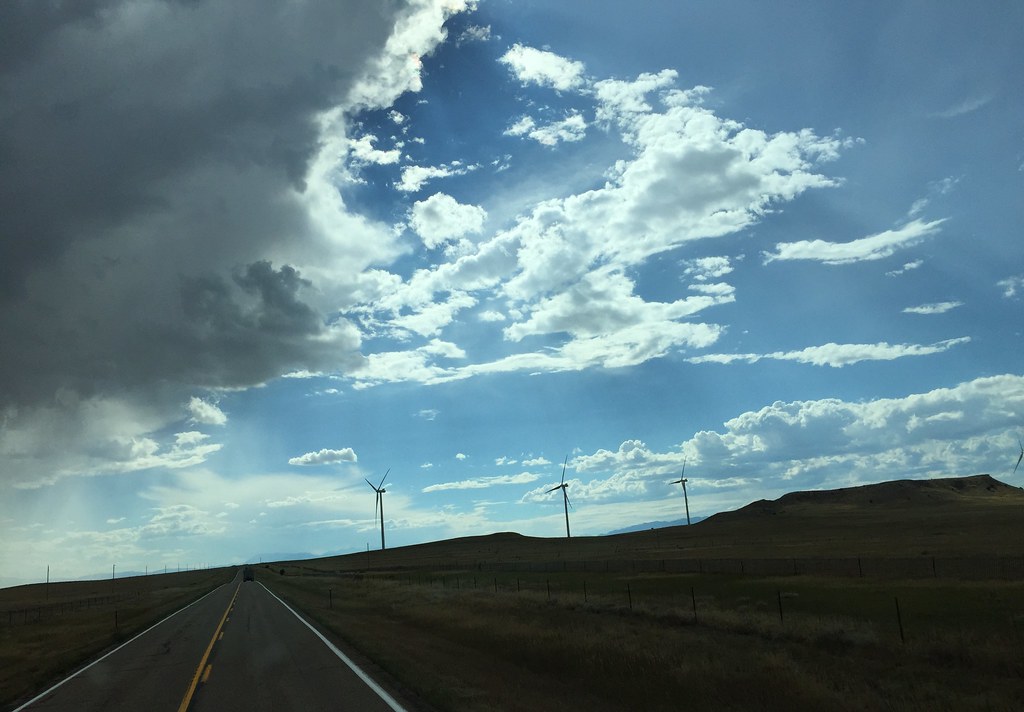 And then I started seeing them on the horizon…the mountains. I get as much pleasure seeing mountains as I do a field of wheat! And tend to take about as many pictures to verify this! 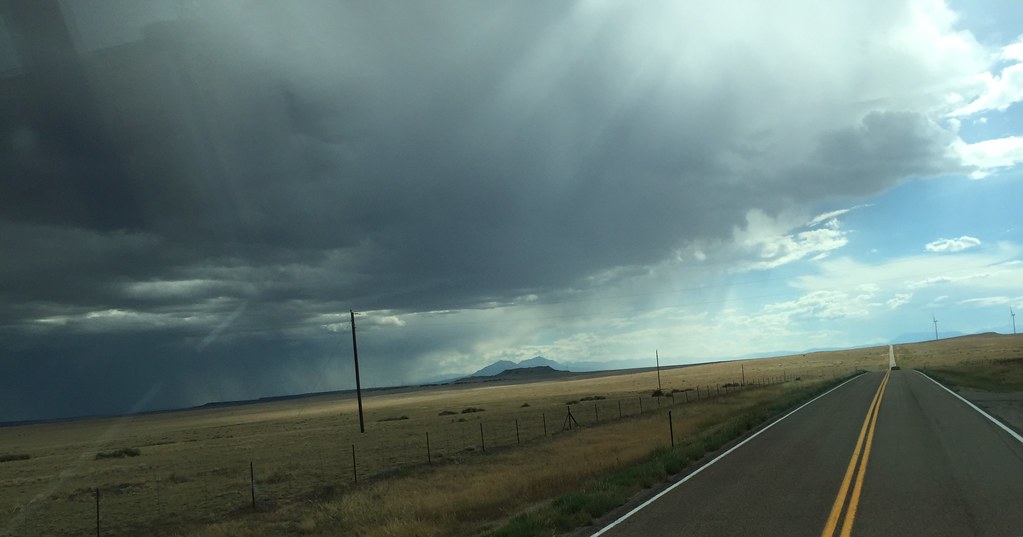 Yes, we did get rained on but with the heat, it didn’t stay wet very long. 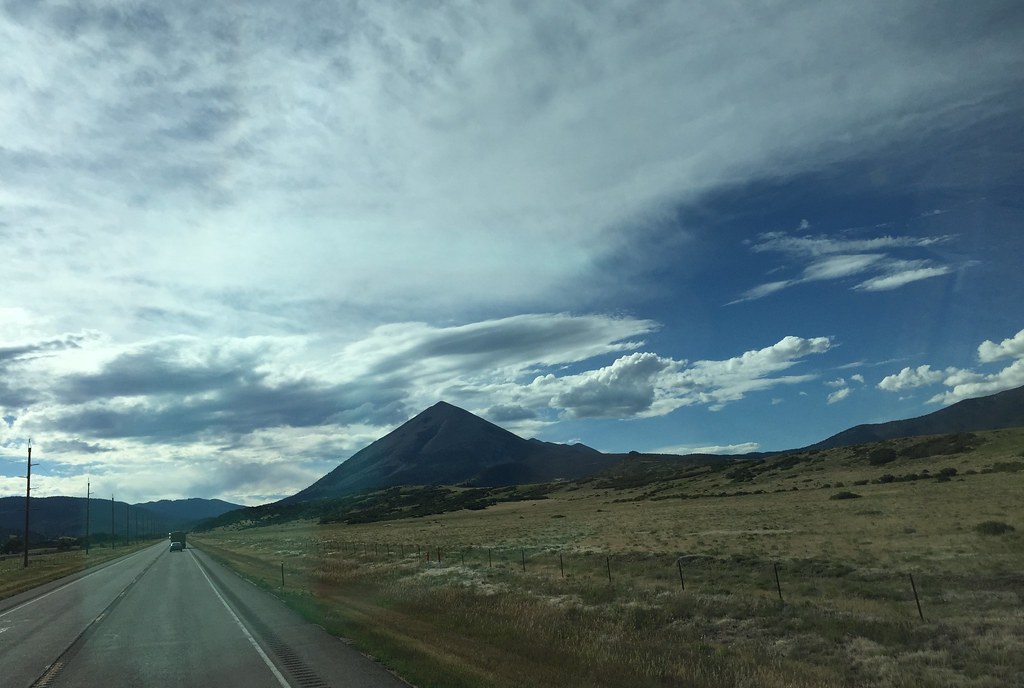 The perfectly shaped mountain. I couldn’t help but think about the many pictures that have been drawn by my kids which included mountains that looked exactly like this one. I now know the mountain they used to draw does exist. 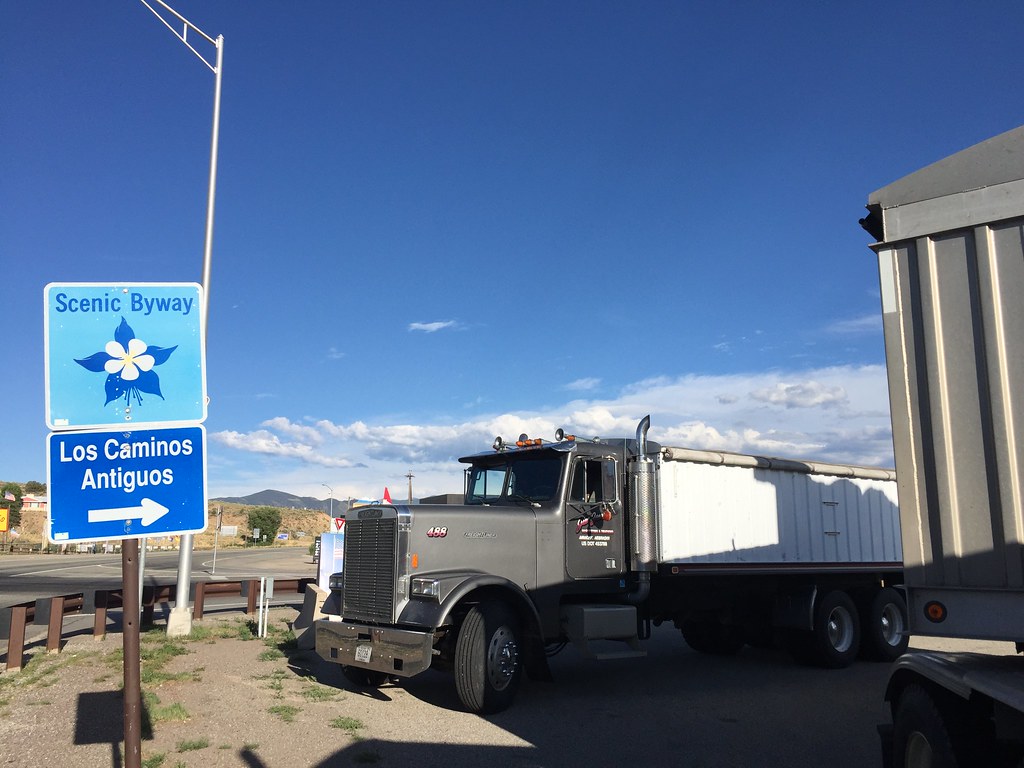 The LaVeta pass is an eight-mile climb. When you finally get up and over the pass, the next town to stop in is Ft. Garland. And…yes…the route we took to our destination is marked on the map as a “Scenic Route”. 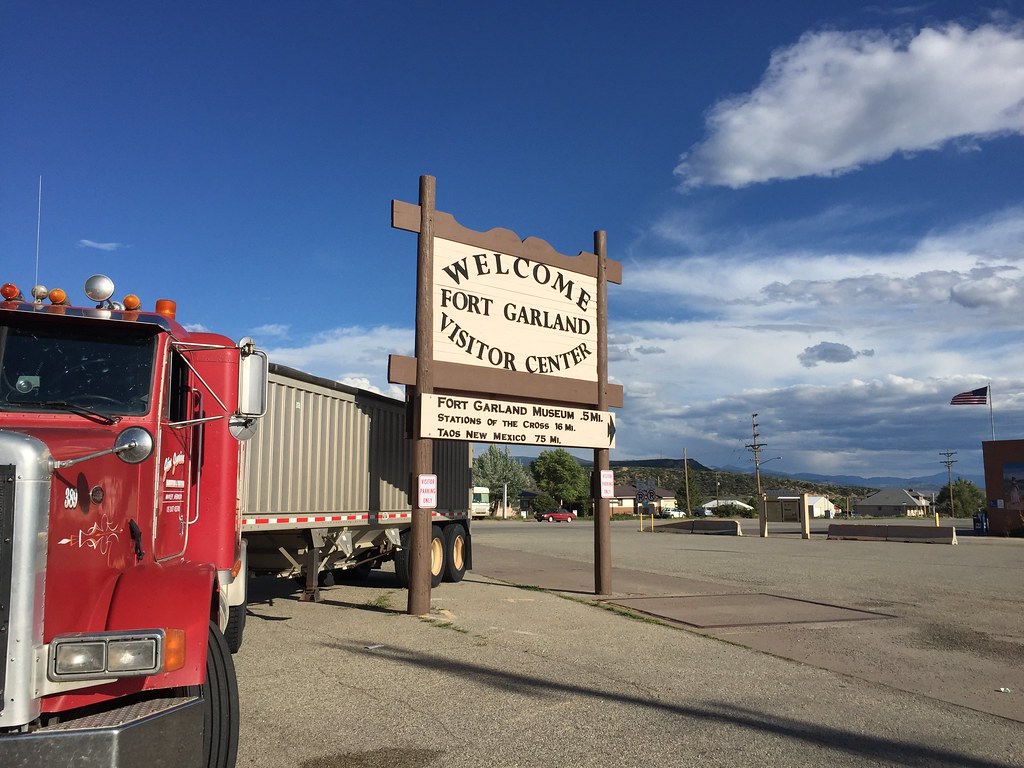 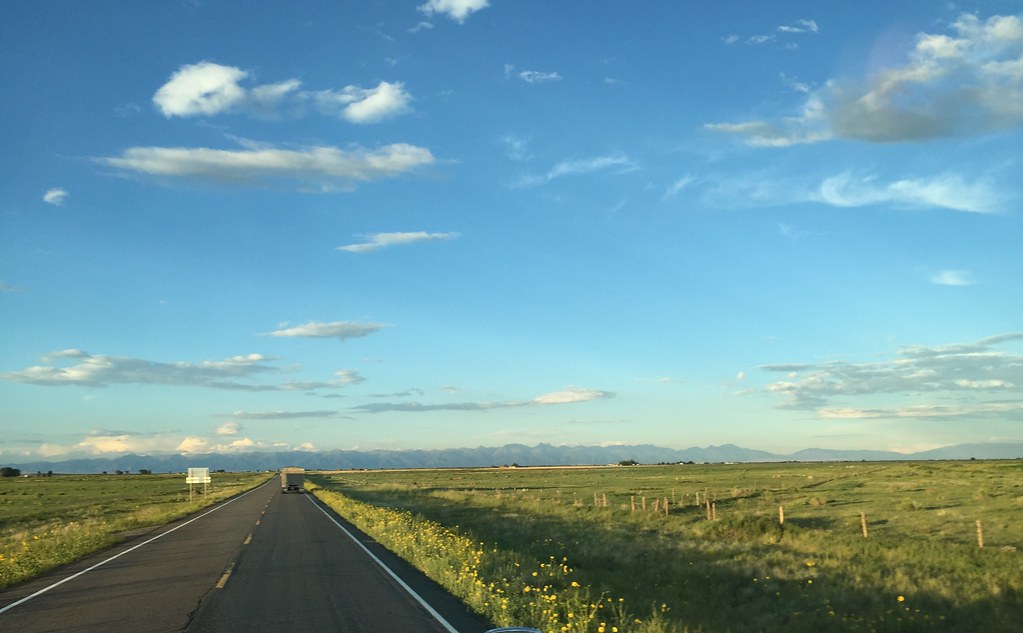 This mountain range is one of several that can be seen from the place we parked Frank and dropped the grain trailer. We will be helping Ryan and Casey while in the valley and this is what they get to look at every. single. day. (jealous) Yes, this is going to be like a working vacation!

As I mentioned, we dropped the grain trailer and parked Frank and left again in the Pete. By now, it was 8:30 pm and we needed something to eat. We walked into a restaurant at 8:50 – they close at 9:00. “Can we still get something to eat?” “Absolutely” was their reply. Once we had a quick bite, we made our way a bit further down the road. We pulled into an empty lot, parked and slept in the “Hotel Pete.” This is what we woke up to in Blanca, Colorado: 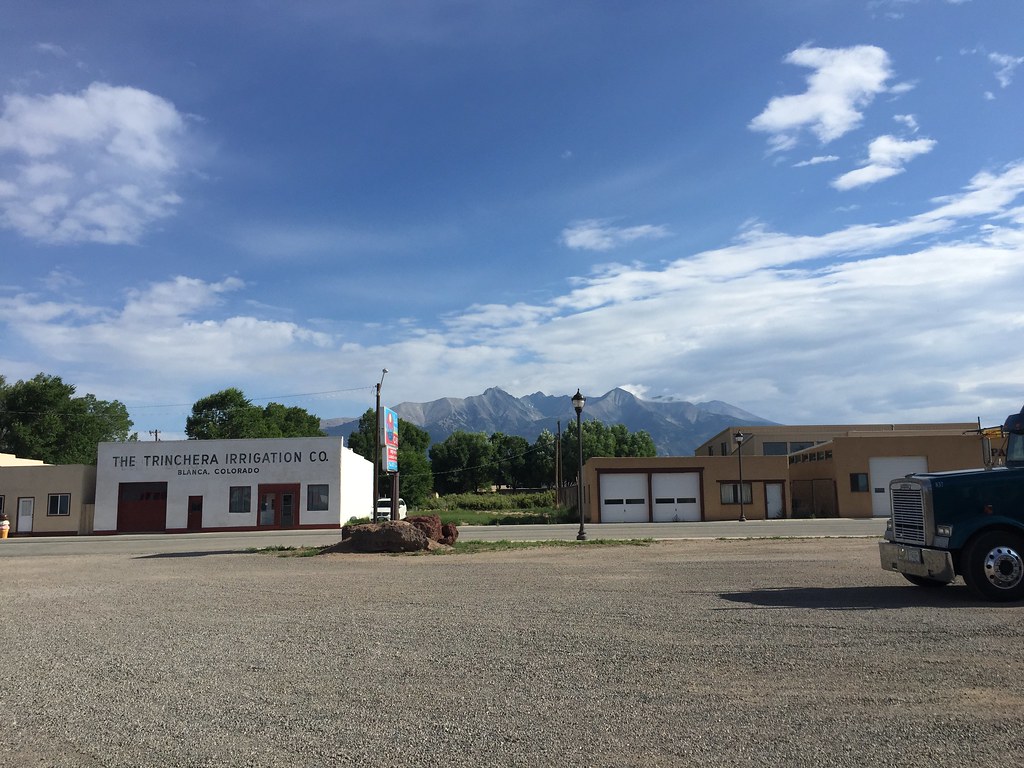 And the next several pictures are of the view on the way down the other side of the pass (forgive the dirty windows). 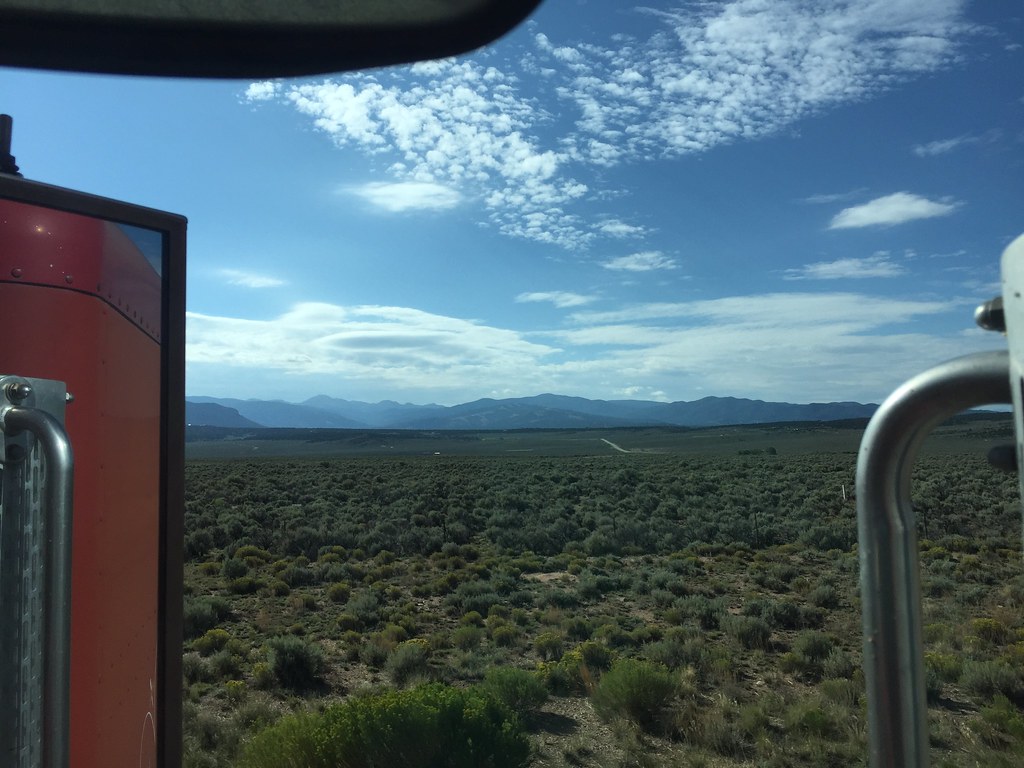 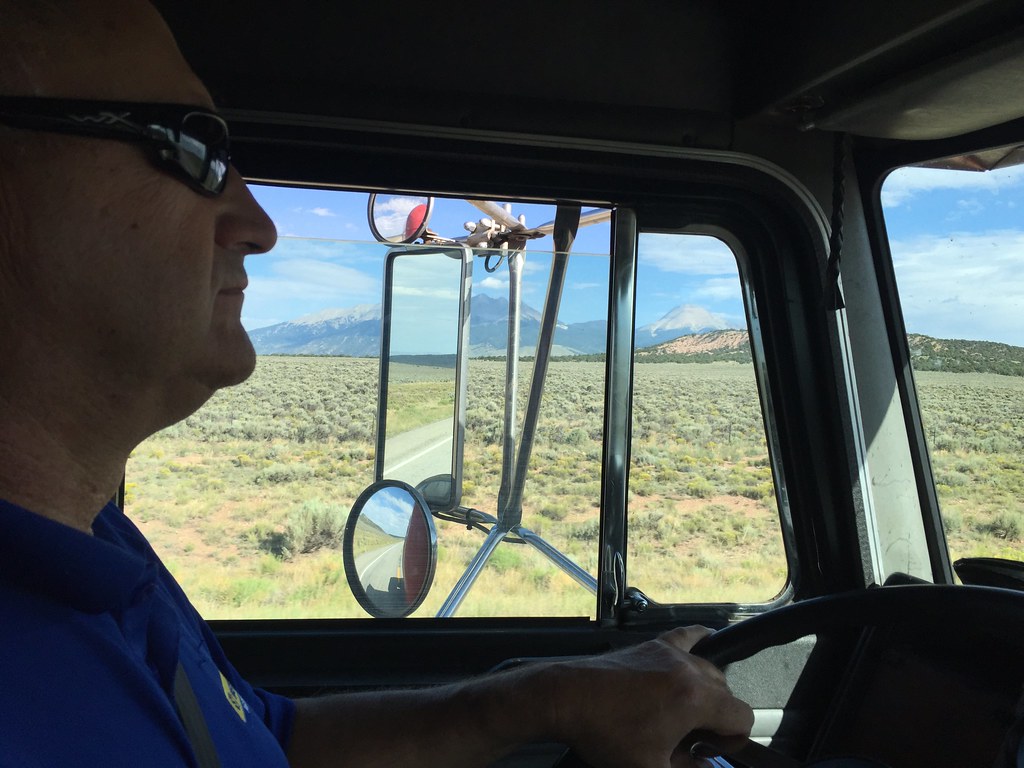 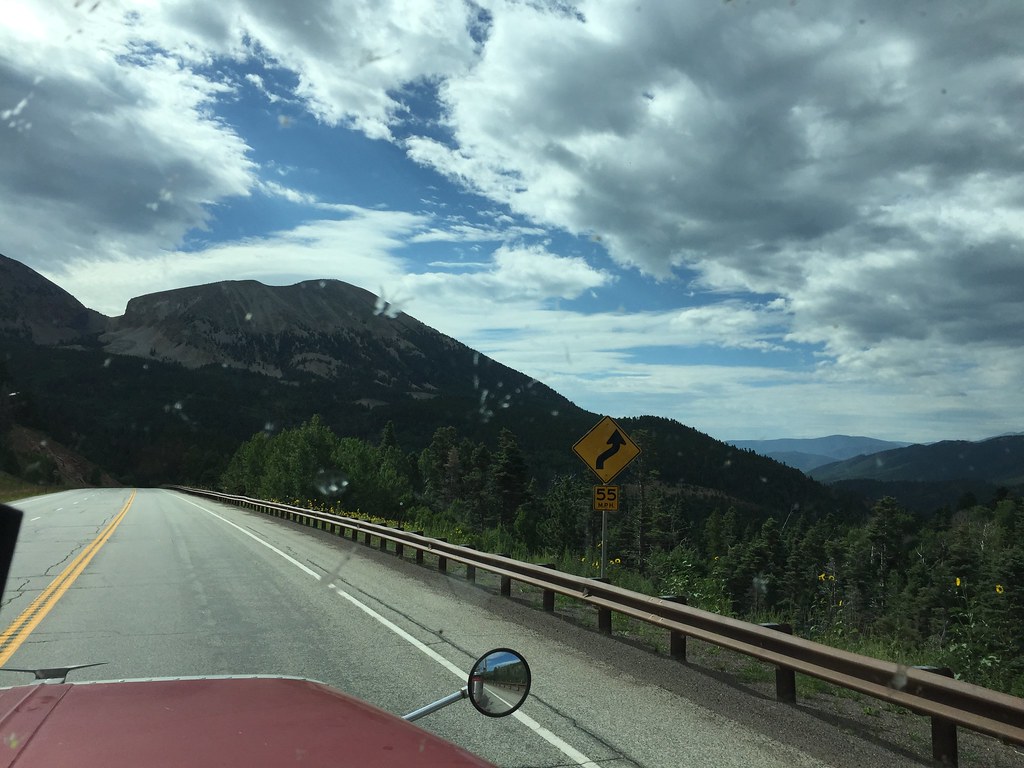 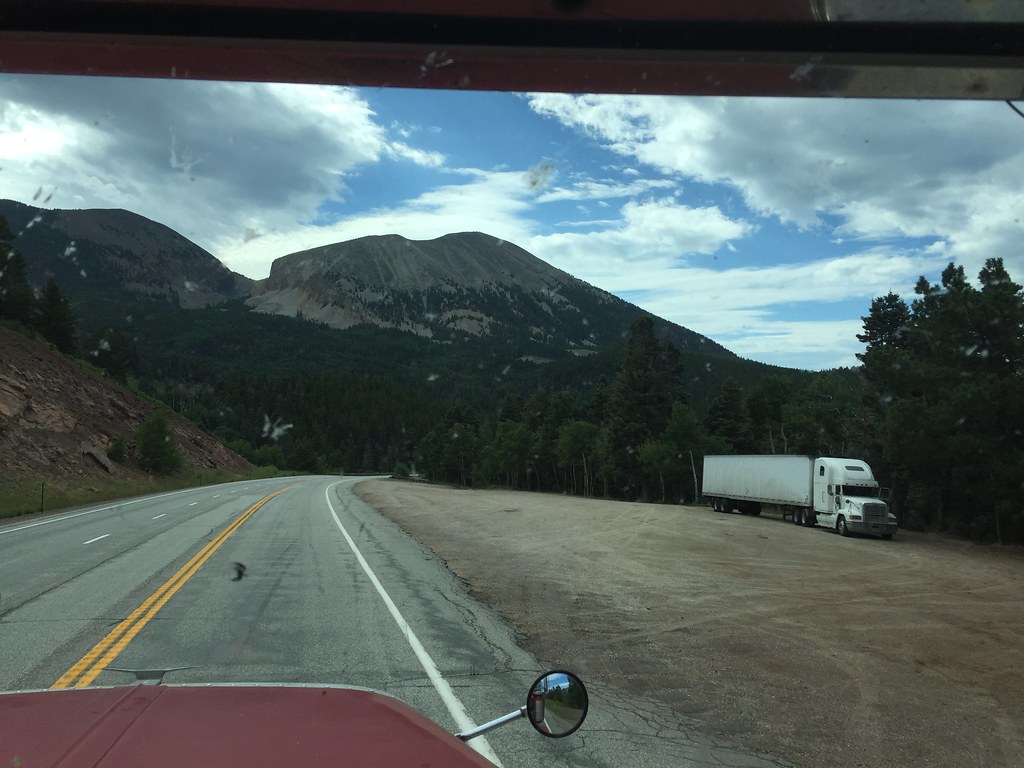 We returned to the Cottage about 2:00 p.m. Wednesday. We waited for the heat of the day to disappear and then washed the Beast for the first time this summer. It was so dirty. She’s loaded and ready to make the trip over the pass Thursday morning. Plans are to leave shortly after sunrise…THAT’S 6:00 AM! I’ll be the first one to tell you I am NOT a morning person! They’re predicting another hot day for eastern Colorado and Jim wants to make it up and over the pass before that heat kicks in.

Once we get this trip made, we’ll have to make another trip to Goodland, Kansas to get our MacDon pick-up head. So, that means all that will remain to make the trip will be the header and the trailer house.  I look forward to this new adventure. I just can’t imagine waking up every day and getting to work in such beautiful surroundings! What a job we have!