All Aboard Harvest | Back and Forth, Back and Forth
13723
post-template-default,single,single-post,postid-13723,single-format-standard,qode-quick-links-1.0,ajax_fade,page_not_loaded,,qode-title-hidden,qode-theme-ver-11.2,qode-theme-bridge,wpb-js-composer js-comp-ver-5.4.7,vc_responsive

Matheson, Colorado –
It’s been over two weeks, already, that we left the San Luis Valley and back to the farm on the Eastern Plains of Colorado. The proso millet needed picked up and we went back to work the very next day.

Proso millet is a small-seeded grass crop, much like wheat. Proso is most commonly used for bird seed but is also used for human consumption and livestock feed.

“Proso millet has also been called common millet, hog millet, broom corn, yellow hog, hershey and white millet (Baltensperger, 1996). Proso millet is a warm-season grass capable of producing seed from 60 to 100 days after planting. Because of its relatively short growing season, it has a low moisture requirement and is capable of producing food or feed where other grain crops would fail.

In 2014, U.S. farmers produced 3.6 million bushels of proso millet. This was a large decrease from the 17.3 million bushels produced in 2007. The greatest production in 2014 was in Colorado, followed by Nebraska, South Dakota, Texas and North Dakota (2012 USDA NASS Census of Agriculture). There is no USDA grain standard for test weight for proso millet, but a bushel weighs from 52 to 56 lbs.” Ag Marketing Resource Center

The days were short. We started later in the day than we did with wheat and because the sun is disappearing earlier, we quit earlier. The evenings are cool (almost cold) and it takes much longer for the mornings to warm up. We had several days, though, that felt like summer time all over again. I would so much rather have the heat of summer than the coolness that fall provides. 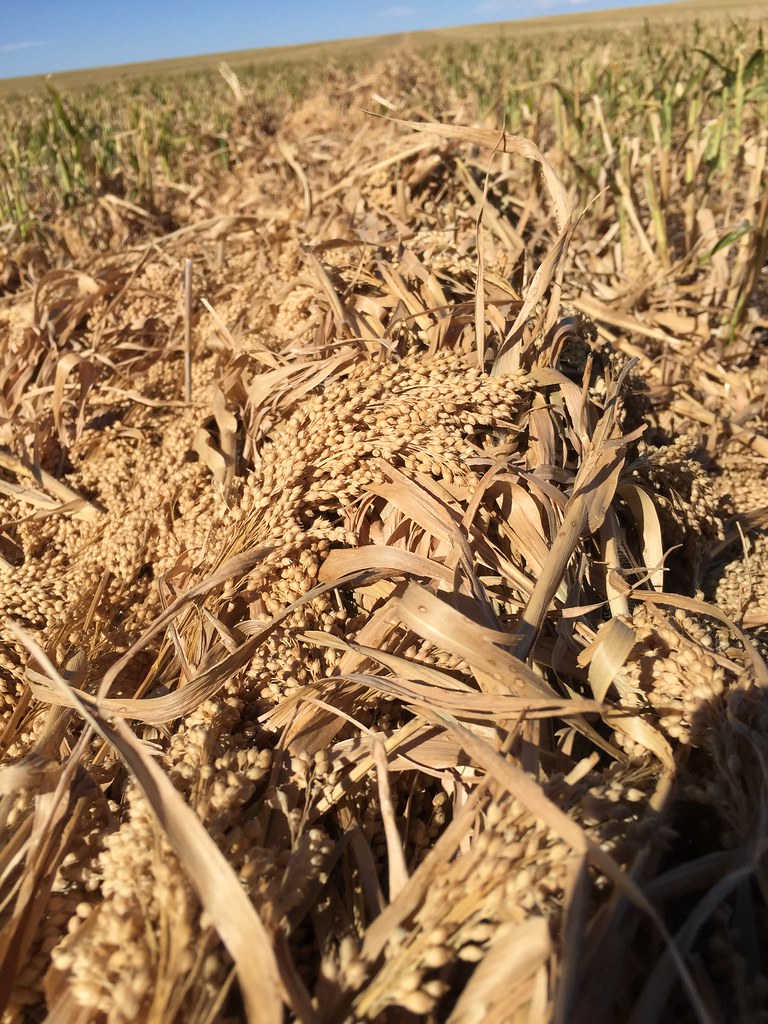 Proso millet laying in a swath. When the plant matures to a certain point, it is swathed (with a swather) and laid in rows to finish ripening. This is done to protect the tiny little grain from weather and the elements until it can be harvested. 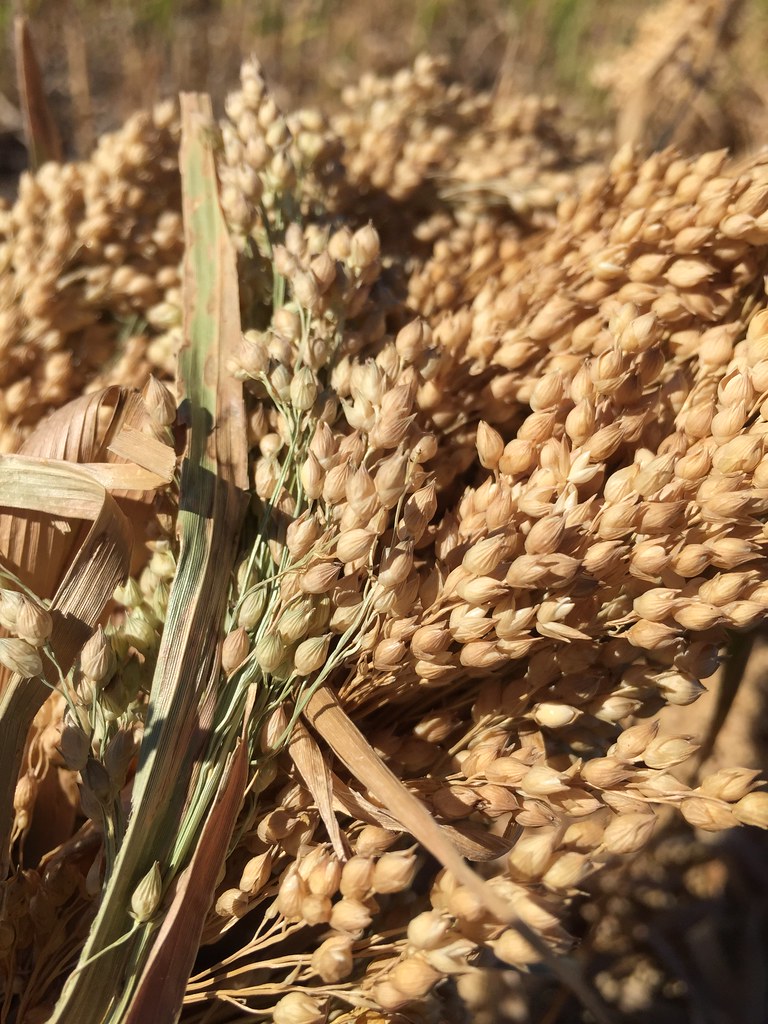 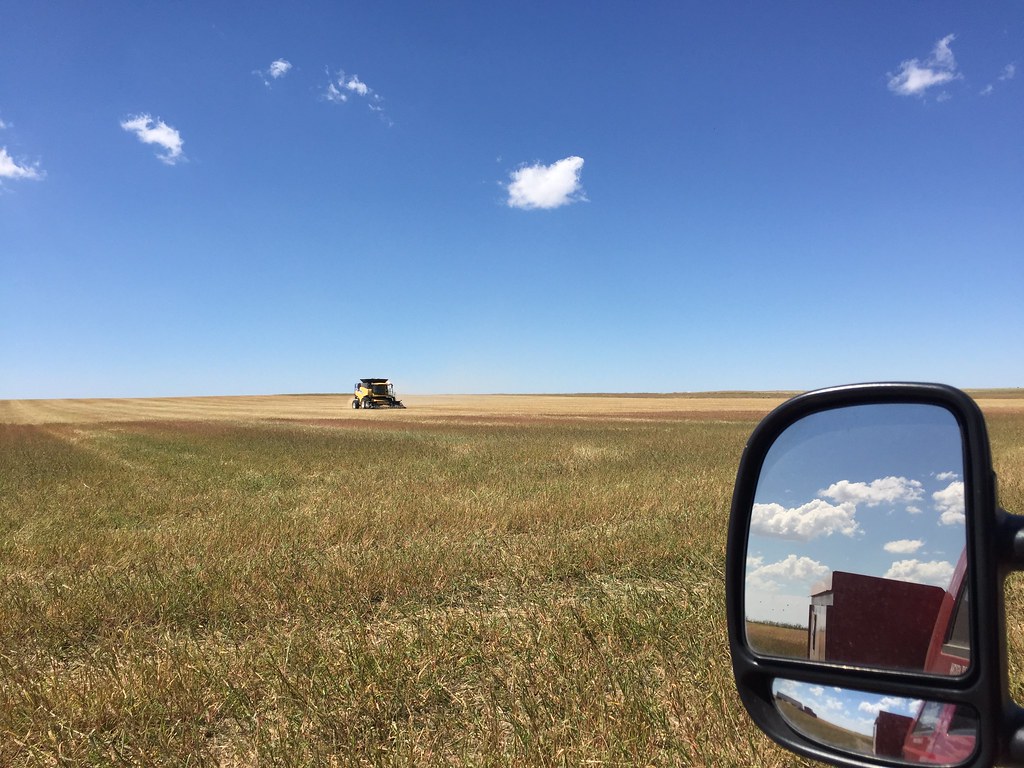 The proso didn’t yield as much this year as it did last year. Last year we saw an average of 40 bpa…this year, 30 bushels to the acre. Most of the millet went into grain bins on the farm due to lack of space in the elevators. The last few days, we got to work with the farmer so it wasn’t nearly as boring as it was when it was just me and Jim. Back and forth, back and forth on those mile long strips tend to get pretty darn boring. My position on the seat was a much more relaxed one during proso millet than with the wheat or barley. With the pick up head, I have quite a bit of leeway and most of what I have to watch is directly in front of me. 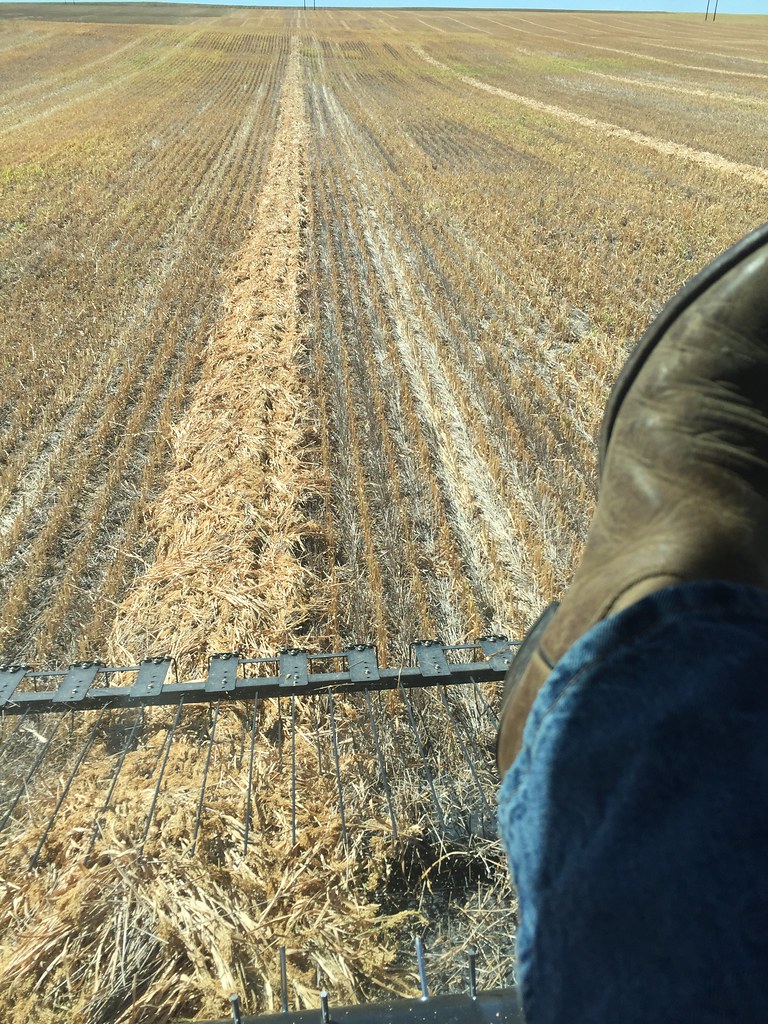 We picked up our last swath for 2016 on Thursday afternoon (9/22). And…that’s that! We started the process of cleaning up equipment and getting things ready to head home, home. I always hate to see the end of harvest so it shouldn’t come as a surprise to anyone who knows me. I dislike the fact that once we get home, I have to watch the clock rather than the sun. The transition between the two worlds is much harder than you would ever believe. 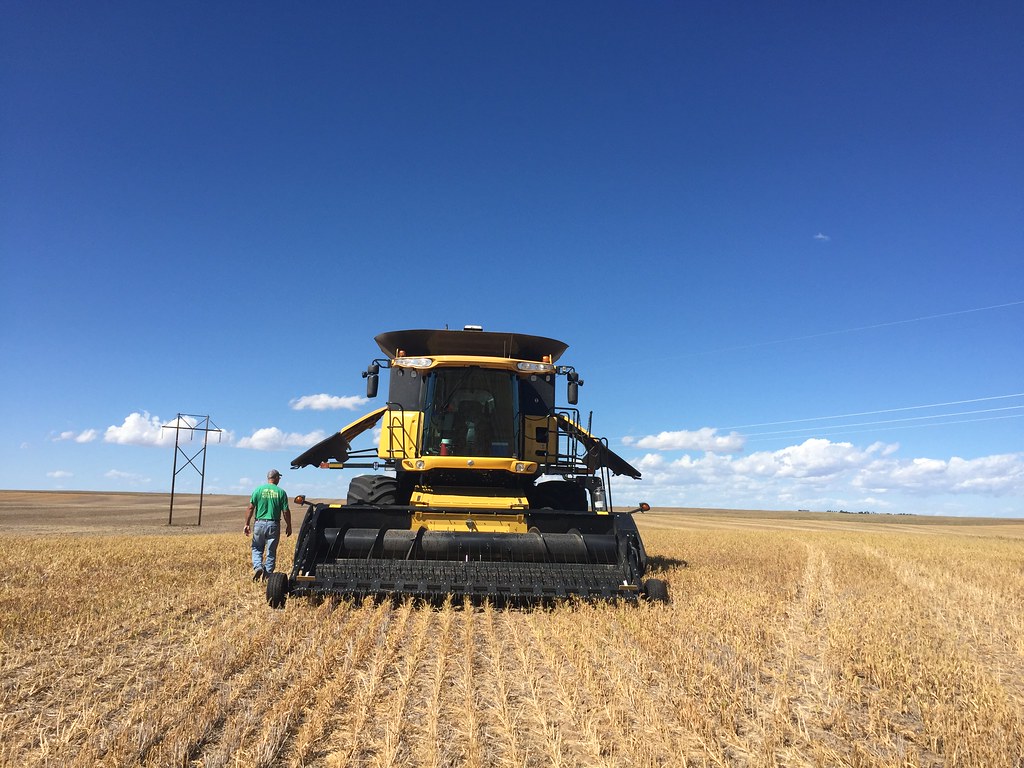 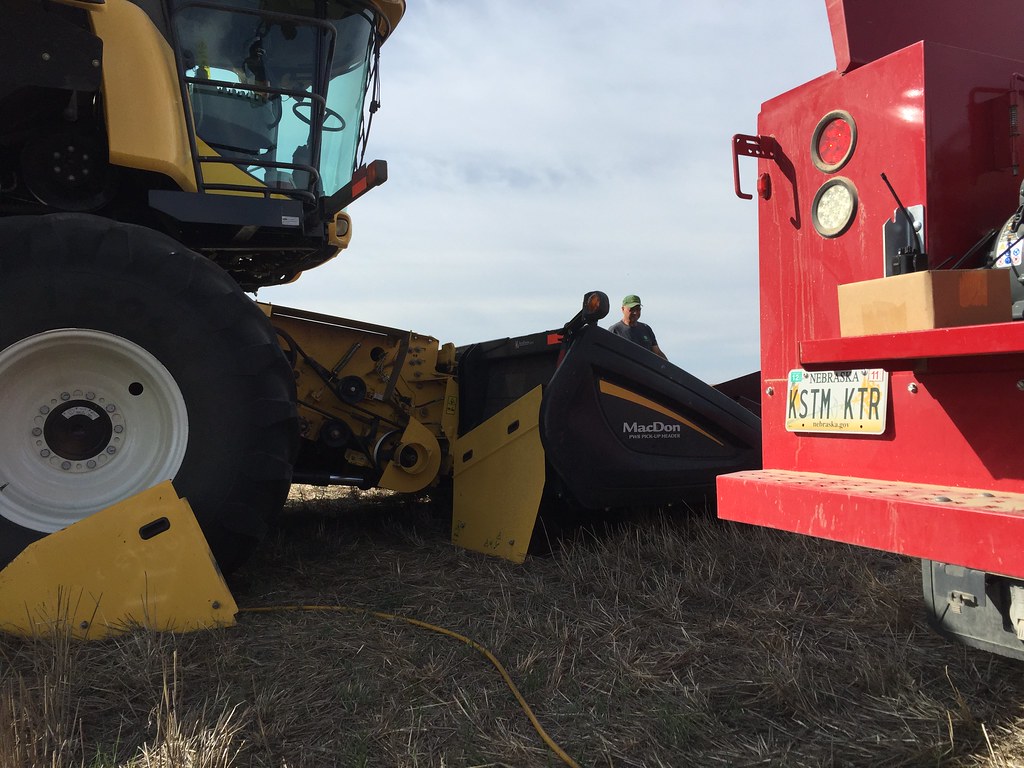 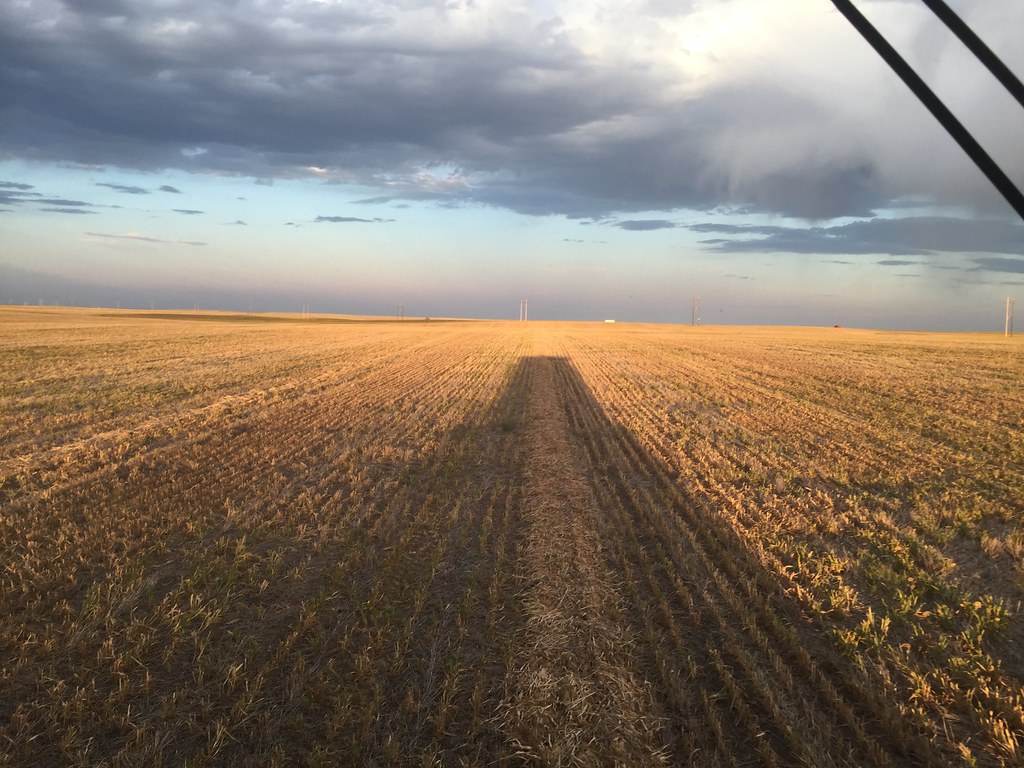 My favorite time of the day – when the shadows are long and the countryside takes on different hues of colors – the golden hour. 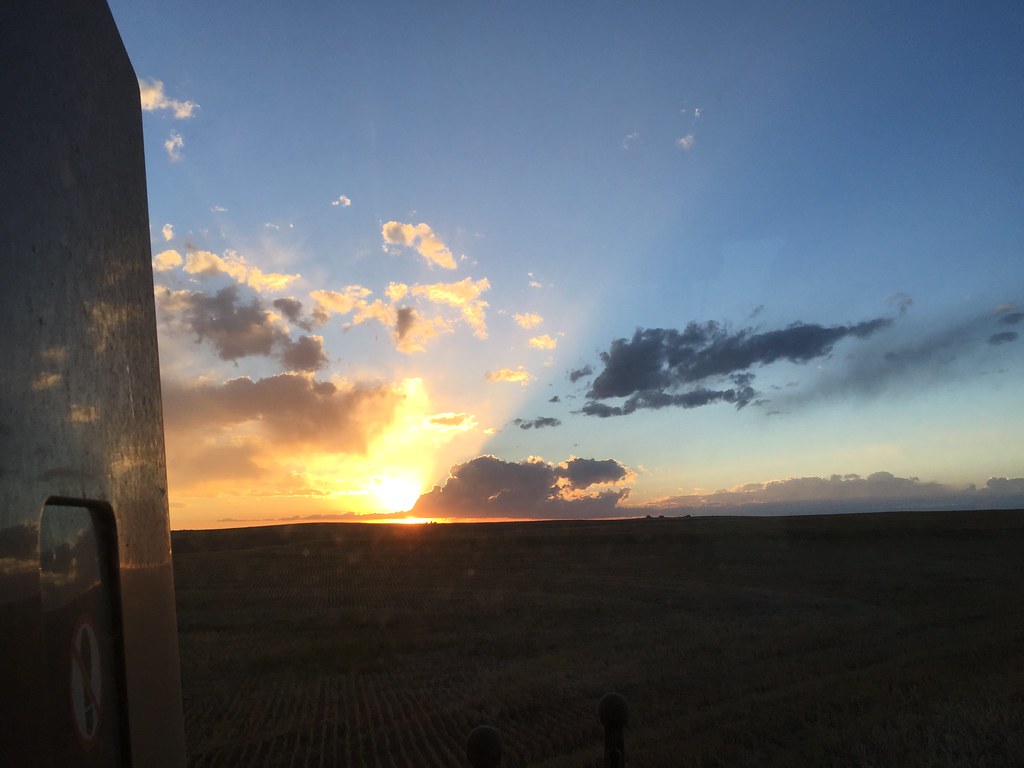 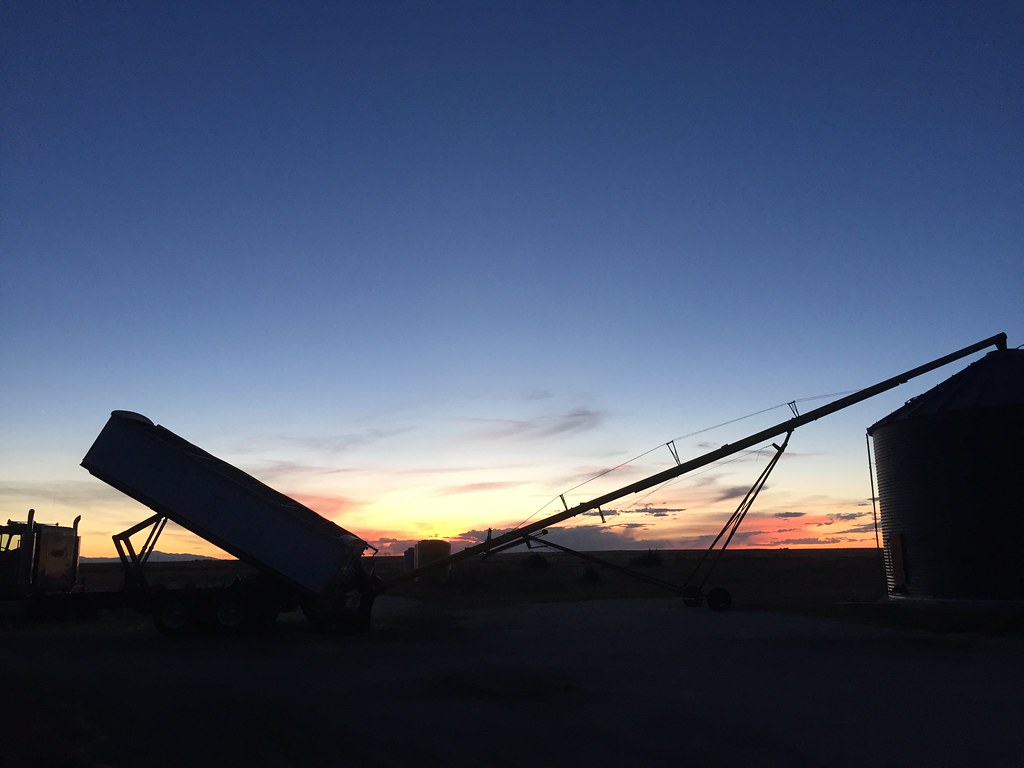 There…between the box and the frame of Frank…it’s Pike’s Peak on the horizon. 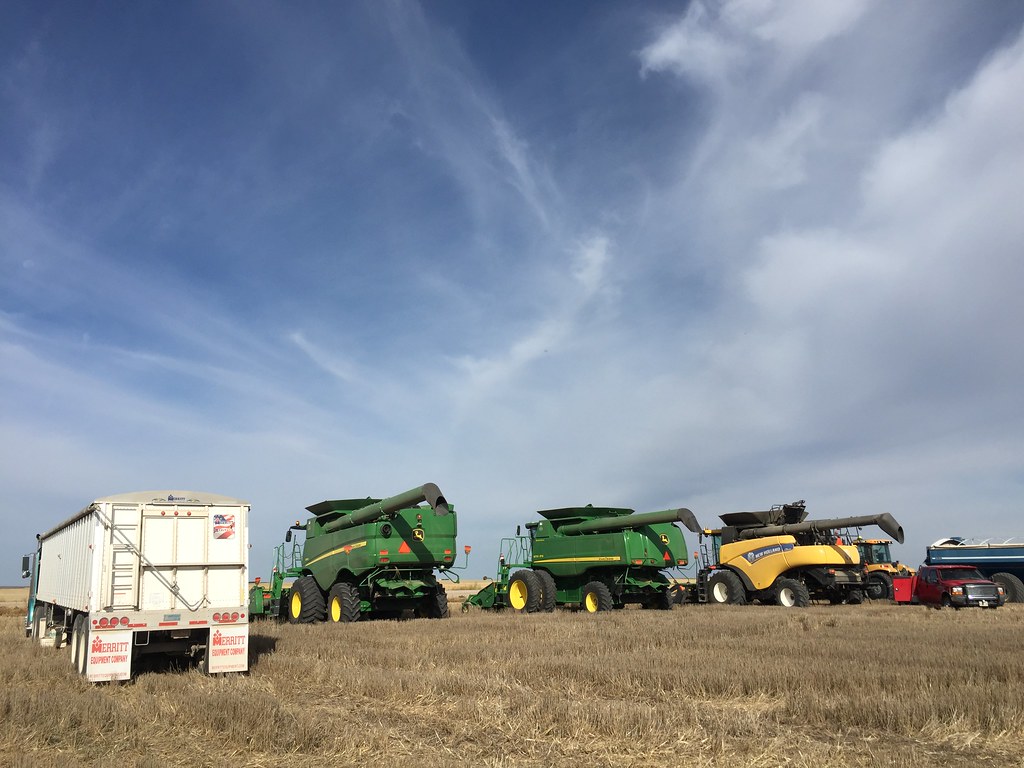 The first morning with the rest of the crew. 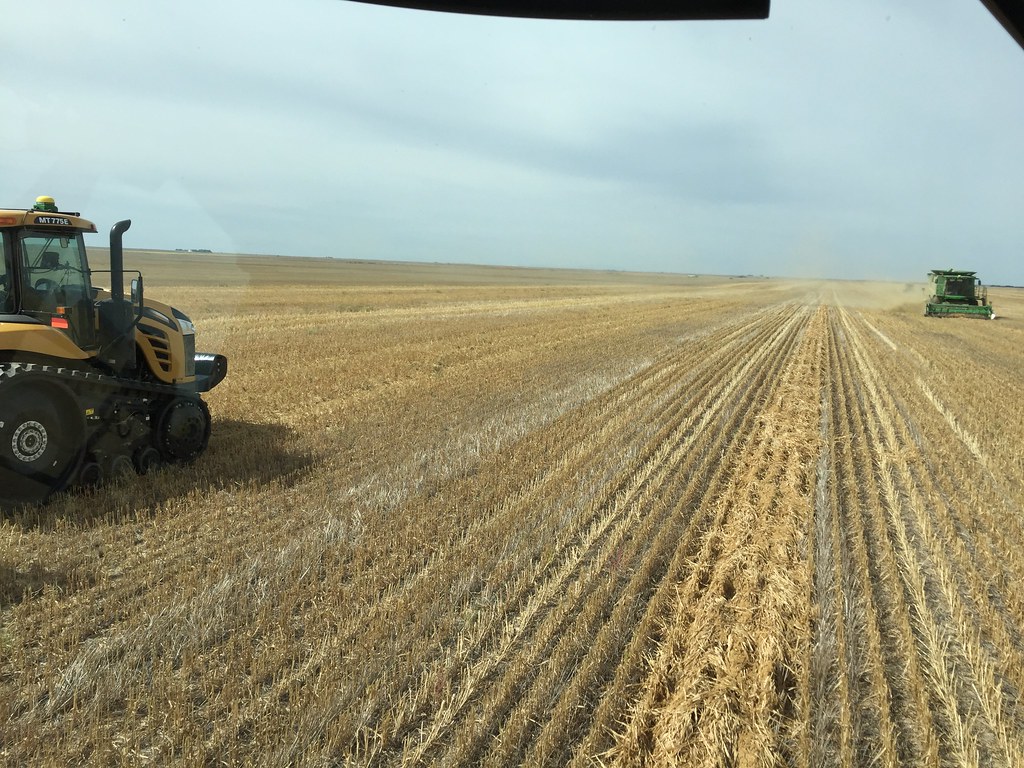 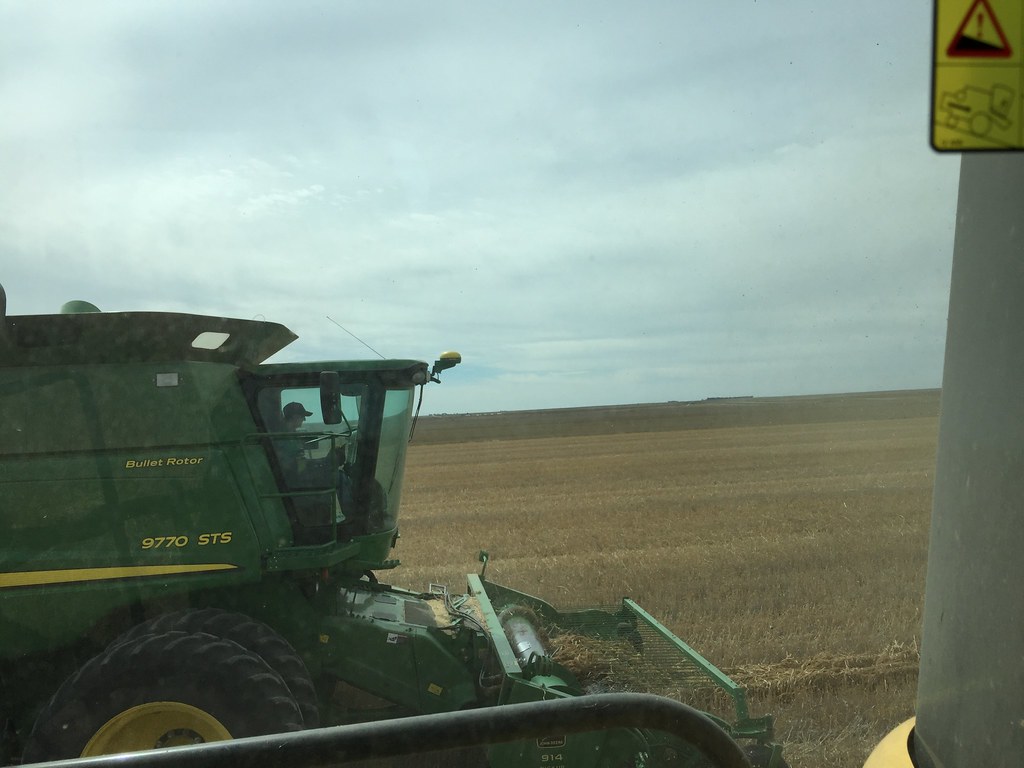 Wes would have been so proud of his mom! Except, if he was still part of the crew, I doubt she would have been given much of a chance in the driver’s seat. This was Sarah’s first time in the combine and she did an aWESome job!! 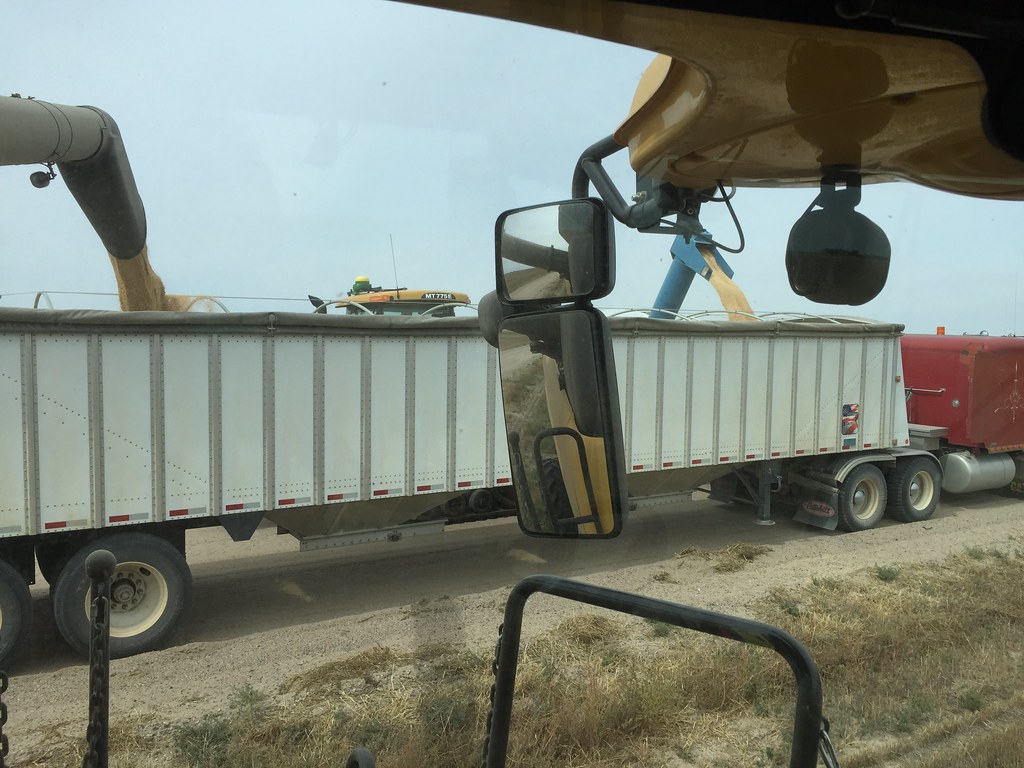 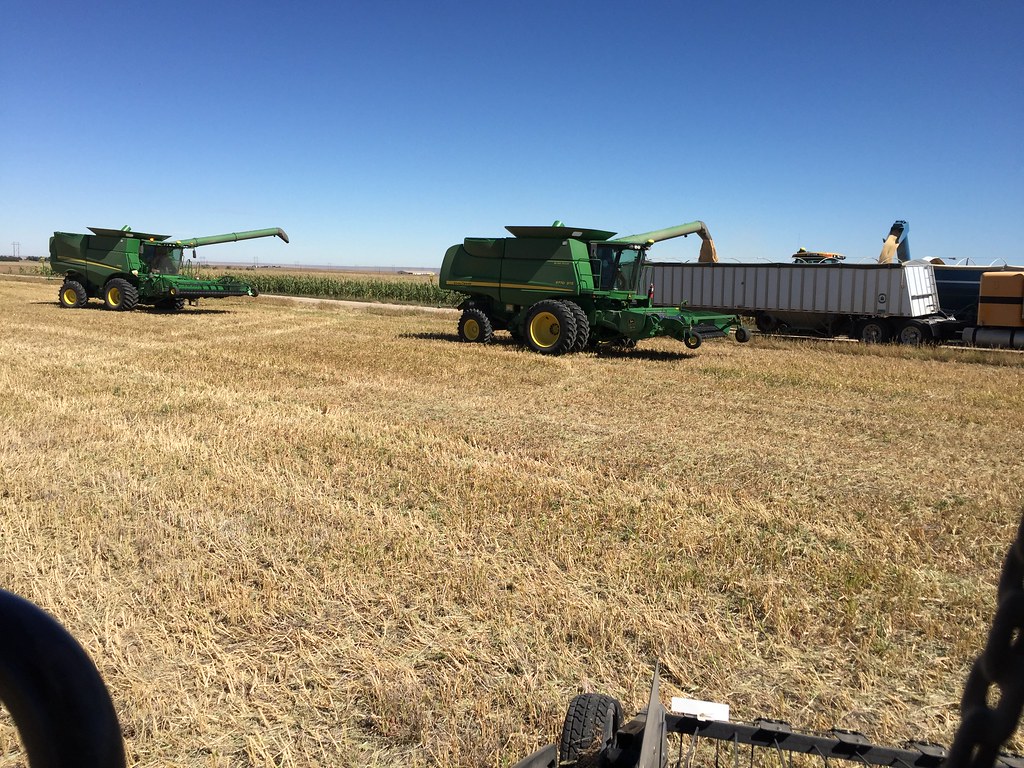 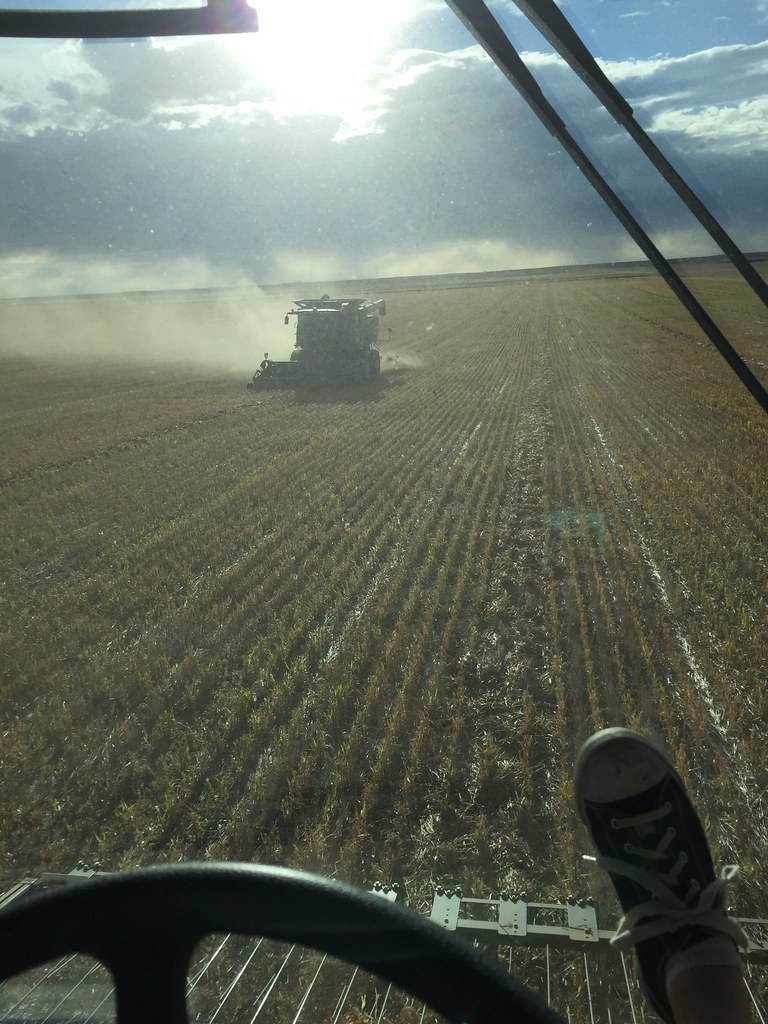 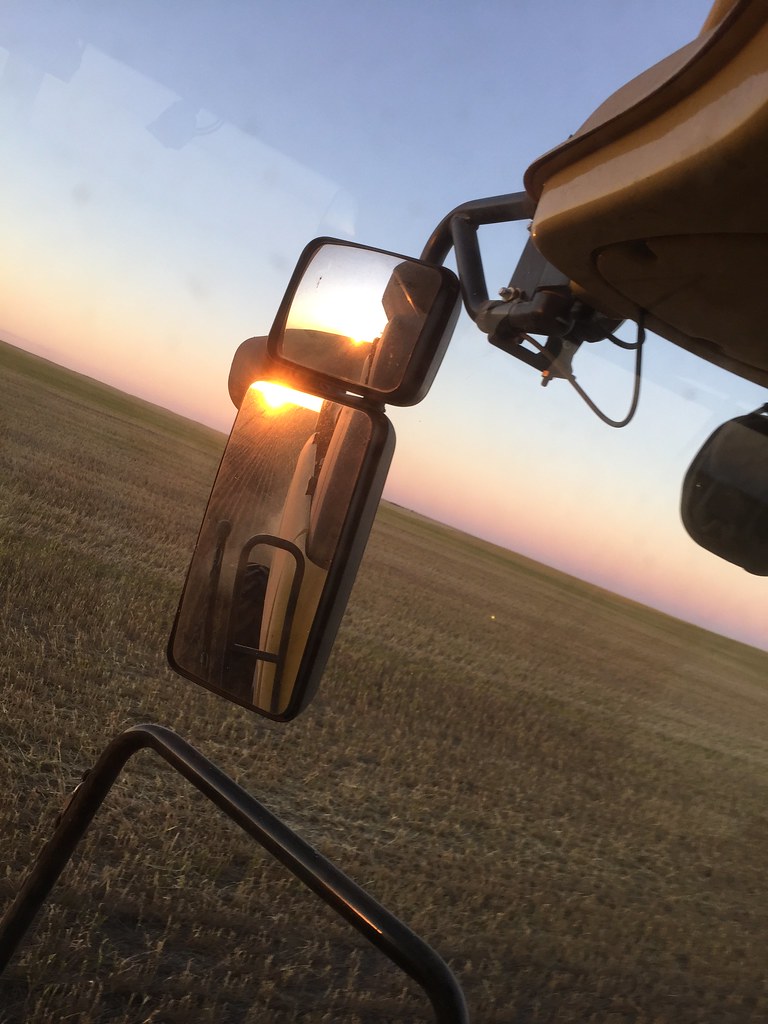 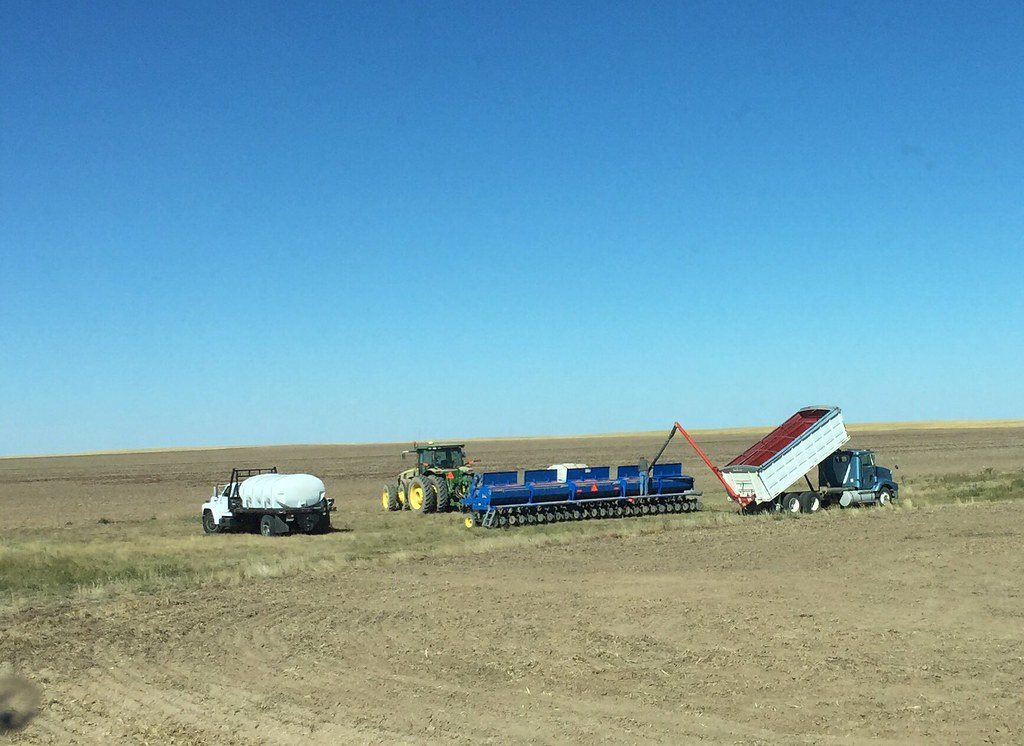 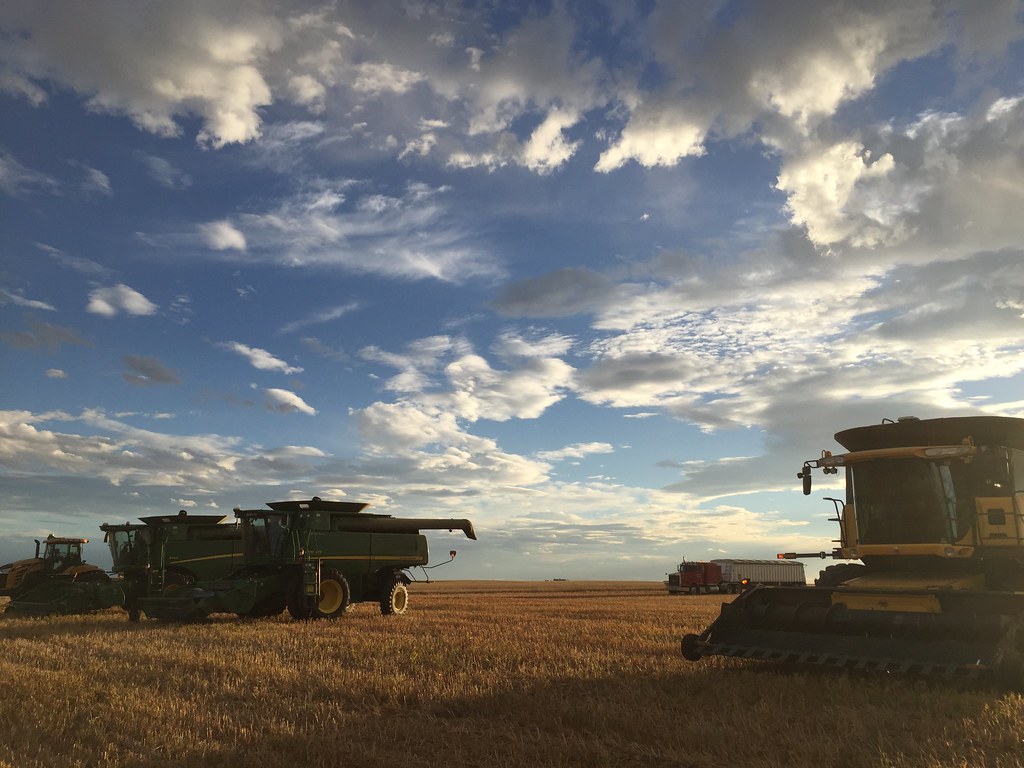 The final night of leaving the Beast in the field to return in the morning for more harvest. 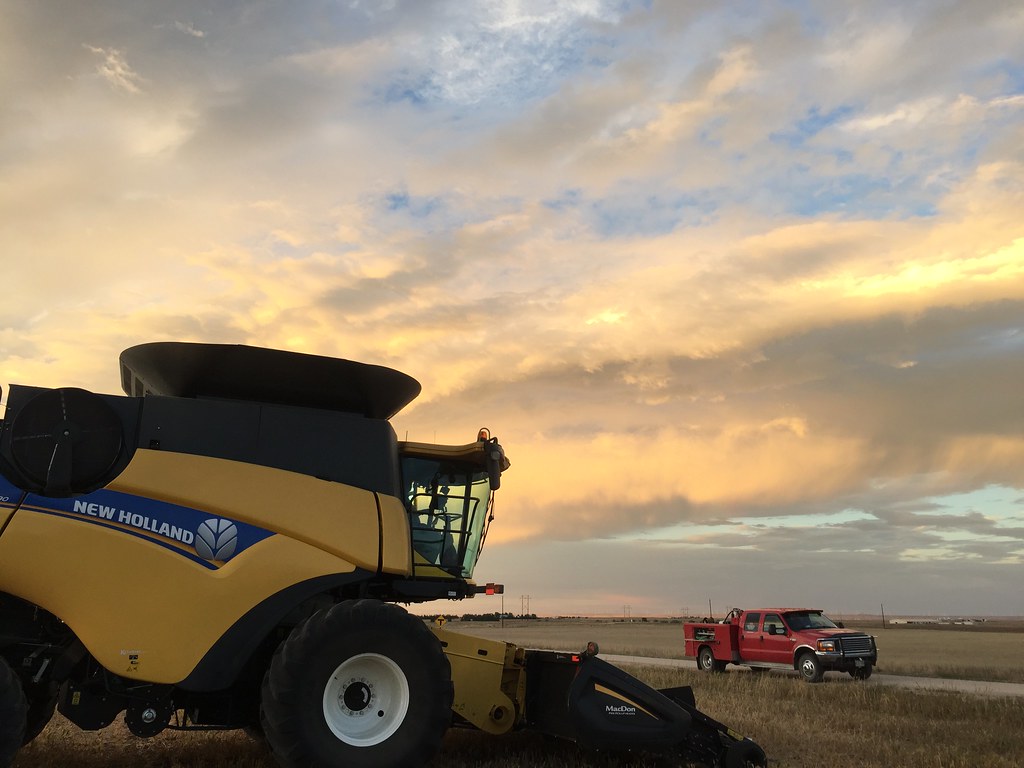