All Aboard Harvest | Tracy: The impending disaster
14646
post-template-default,single,single-post,postid-14646,single-format-standard,qode-quick-links-1.0,ajax_fade,page_not_loaded,,qode-title-hidden,qode-theme-ver-11.2,qode-theme-bridge,wpb-js-composer js-comp-ver-5.4.7,vc_responsive

Claude, Texas – Thoughts of how I was going to write this blog post have been swirling in my head for several days.

Harvest 2017 is still very young. Most of the custom harvesters were on the road and in the fields by the end of May – just barely a month ago. However, before we even left home, we began to see a glimpse of what we might be up against. The three major variables that I am thinking about are low wheat acres (smallest on record since 1919), low commodity prices and the weather. 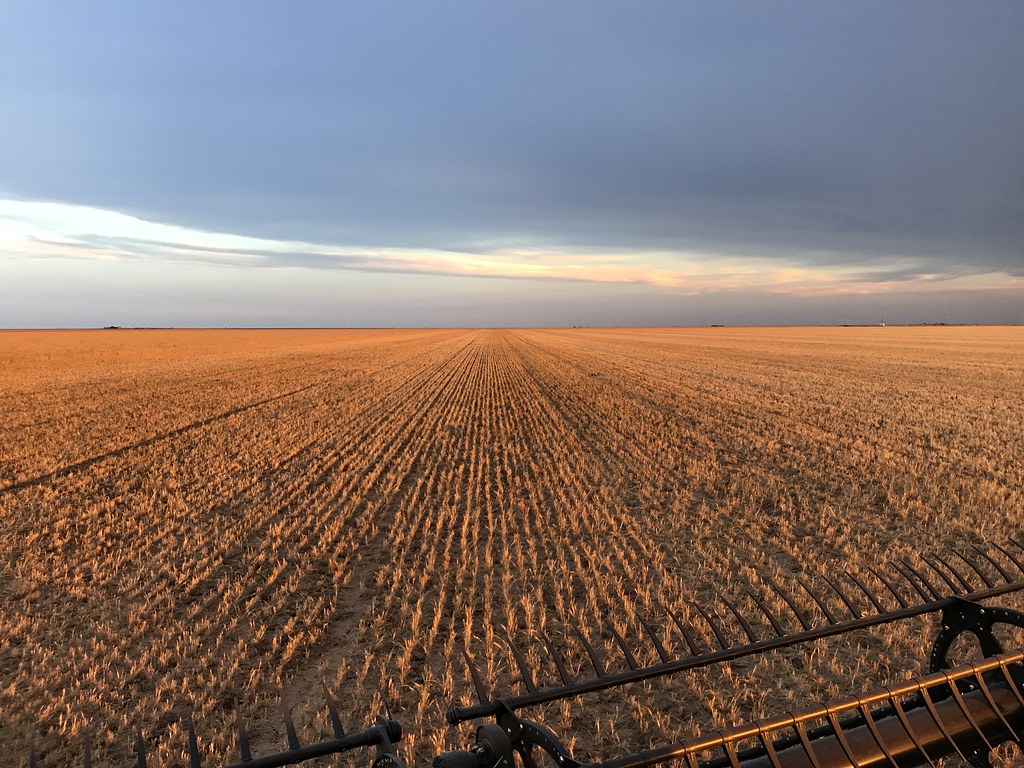 To me, there’s nothing prettier than a cut wheat field.

We all know farmers have to do what is best for their business, and with the price of wheat being what it has been, they’ve made the decision to eliminate a crop that so many of us have come to rely on for income. Wheat acres were replaced with different crops with the hope that the change might help them make a profit again. They aren’t thinking about the custom harvester – and I get that. So, we deal with what’s available and try to do the best we can. Anyway, that’s the outlook Jim and I had. You can always hope maybe you’ll be able to pick up a few more acres along the way to help cover those you’ve lost.

Now, let’s add one more variable to this picture. Due to the higher commodity prices the farmers had been getting, quite a few of them purchased combines so they could do their own harvest. The need for the custom harvester was eliminated and the producer became more self-sufficient at harvest time.

And then there’s the variable none of us have any control over – the weather. 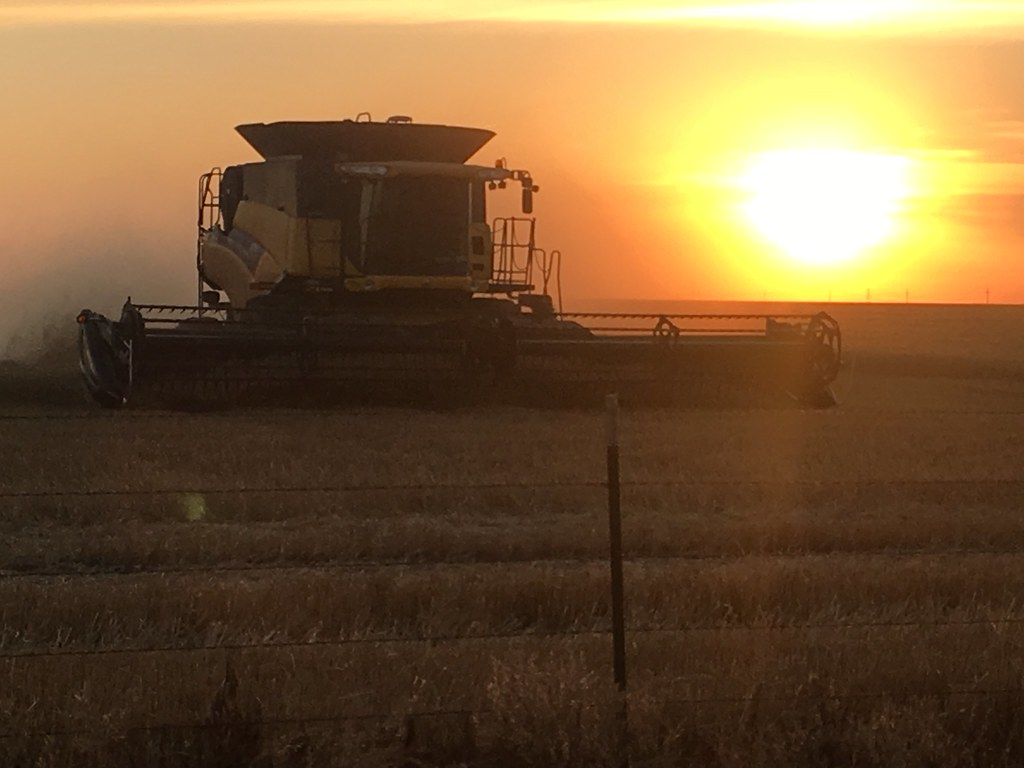 Photo by our farmer, Bryan.

A month into this northward journey, the custom harvesters are beginning to see the effects of all three of these variables and are looking straight into the face of a disaster. The word disaster puts a pretty awful picture in your head, and agriculture has seen its fair share of those recently. Nearly every harvester that I’ve been in contact with lately is struggling.

When we prepare for our journey, it begins immediately after we’ve finished the previous harvest. There may be a break in the action for a month or so (if we’re lucky) for the harvester, but the expenses and preparations for the next year’s harvest never take a break. During the six months of winter, equipment will be replaced or repaired, insurance premiums and equipment payments continue to be made, and crews are hired. Who in their right mind would spend up to $400,000 to trade or upgrade a combine with no certainty of income? It is a year-round preparation for the services we provide, and we don’t prepare for a disaster. We prepare to do our job with no guarantees of income… much like the farmer, except there is one major difference. When the farmer suffers from a disaster, there is generally some sort of assistance to help him get back on his feet. The custom harvester has no safety net whatsoever. There is no insurance. There is no government assistance. When we’re knocked down, we can only hope the money has been managed well enough to get us through the next stop or even the next year. The custom harvester is the final step in the producer’s harvest, the one piece of the puzzle that is still negotiable, and the contract is still signed with a handshake. 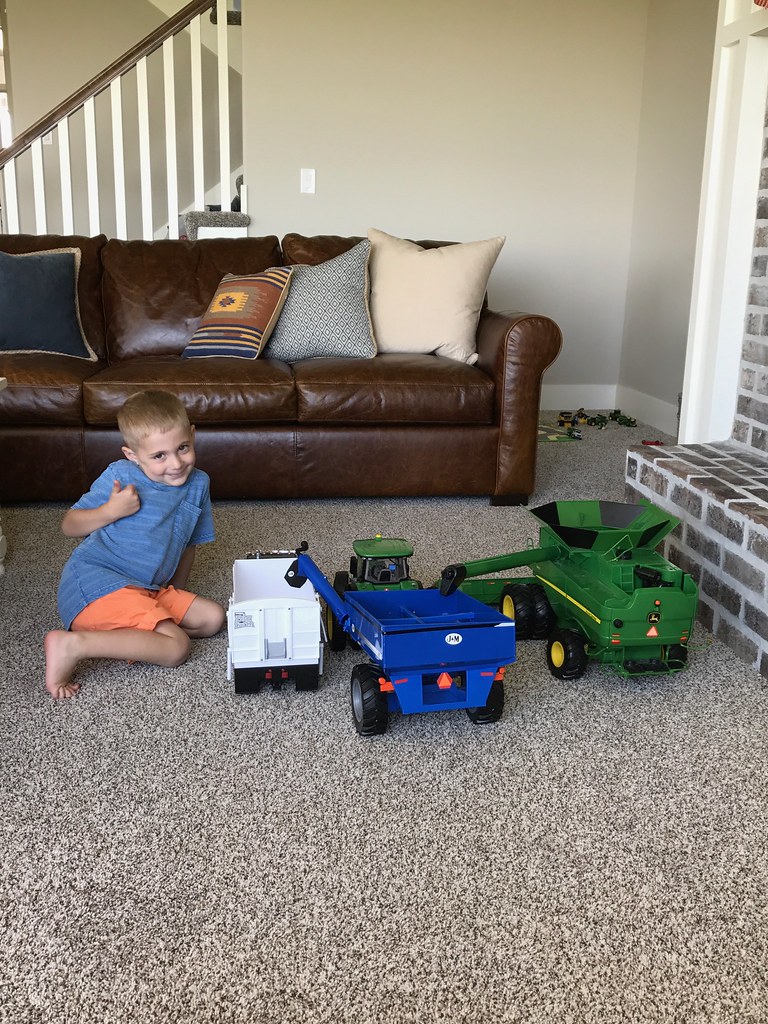 Jamie sent me this picture of Eli doing a little carpet combining. Wrong color of machine for this crew but a good one, none the less.

Now, let me paint the picture of the trickle-down effect when the harvester has experienced loss. It doesn’t just affect us. A loss for us is also a loss felt by the community. When the “Wheaties” pull into a small community, I’m certain they feel the impact we make on their business. For the next two weeks to ten days, the cafes, the grocery stores, the CO-OPs, the post office, the implement dealers, the trailer parks, etc. all see an increase in their final numbers. When we don’t show up, the economic impact is felt. In some places, the small communities will double in size due to the return of the harvesters.

It’s very easy to listen to other harvesters tell me their stories of not having the acres (some not even leaving home until much later than usual) when you’re sitting on a job. It’s another thing to be able to fully understand what they’re up against because now you, too, are feeling the very real struggle they are. A week ago today (6/23), we received the phone call from our farmer in Colorado (job #3) we didn’t want to receive. We knew in the back of our mind it might be coming because of the reports of drought in their area. Of the 5,000 acres they had planted to winter wheat, only 2,000 was going to be spared from being sprayed and killed. They have two combines of their own, so they would be able to harvest what was left. So, we hung our heads for a little while but knew we had the next job to get through before we really had to figure out what to do next.

Then we got the text late Tuesday afternoon from job #2. The ugly monster of a cloud that we were watching on radar hanging over Garden City did, in fact, drop hail that completely destroyed all of the acres we would cut. It is sort of ironic, the acres we had been holding our breath for in April (due to the late season blizzard) were now gone due to another act of nature. And from what I understand, those acres received 22 inches of wet, heavy snow, stood back up, filled and the farmer was looking at another bumper crop. 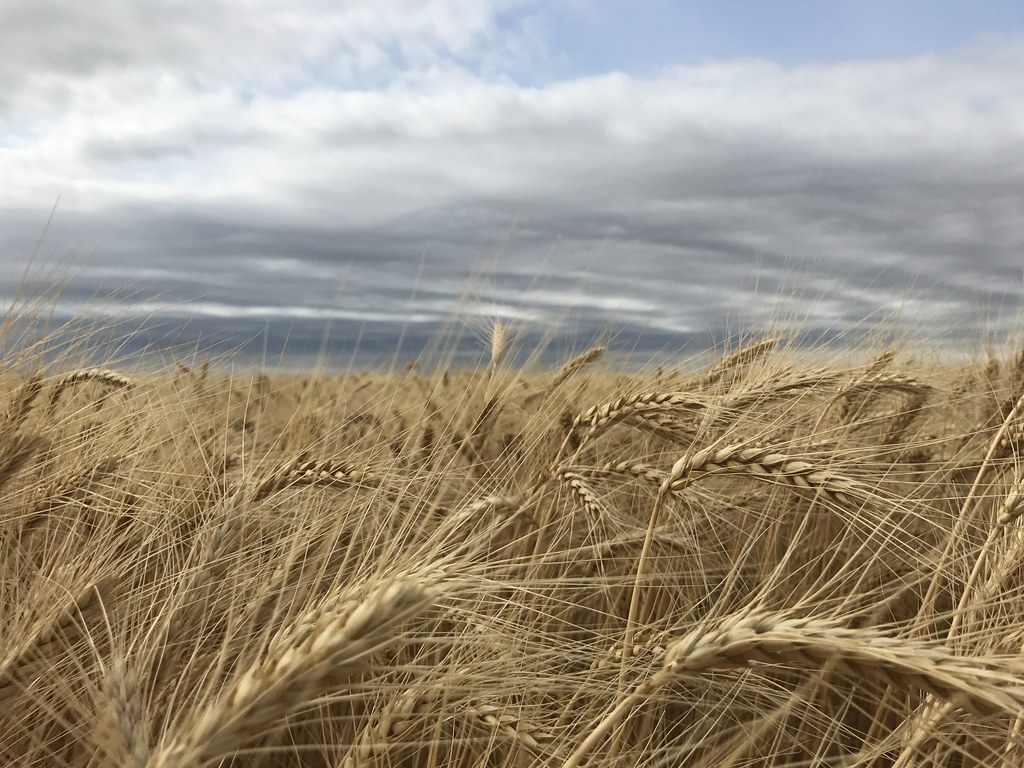 Storm clouds on the horizon.

Within days, we lost everything we left home for, everything we prepared for and everything we hoped for. NOW, I know how they feel. Now, I can fully understand what the other harvesters are feeling. It’s the sinking feeling in your gut of not knowing what to do next. How do we make up lost acres? Where do we go? Should we just lick our wounds, gather everything and head home? Do we close our eyes and point our finger on a map? As of today, we have nothing certain lined up until September, and let’s hope the proso millet crop holds on over the next couple of months. In all of our 35 years of being on the road, we’ve never experienced anything like this. The one comfort is knowing we’re not in it alone.

We are a low-budget operation… two people with one combine. We are such a little piece of what the larger harvester operations experience – the number one difference being the expense of labor. We have chosen to be a smaller-scale operation for that reason. BUT… it doesn’t mean it doesn’t affect us any less in a situation as this. Some have told me, “Yes, it’s bad for you but just look at so and so.” I understand all of that; but in our world, this is just as much of a disaster to our low-budget operation as it is to the larger crews. And, yes, it could always be worse. 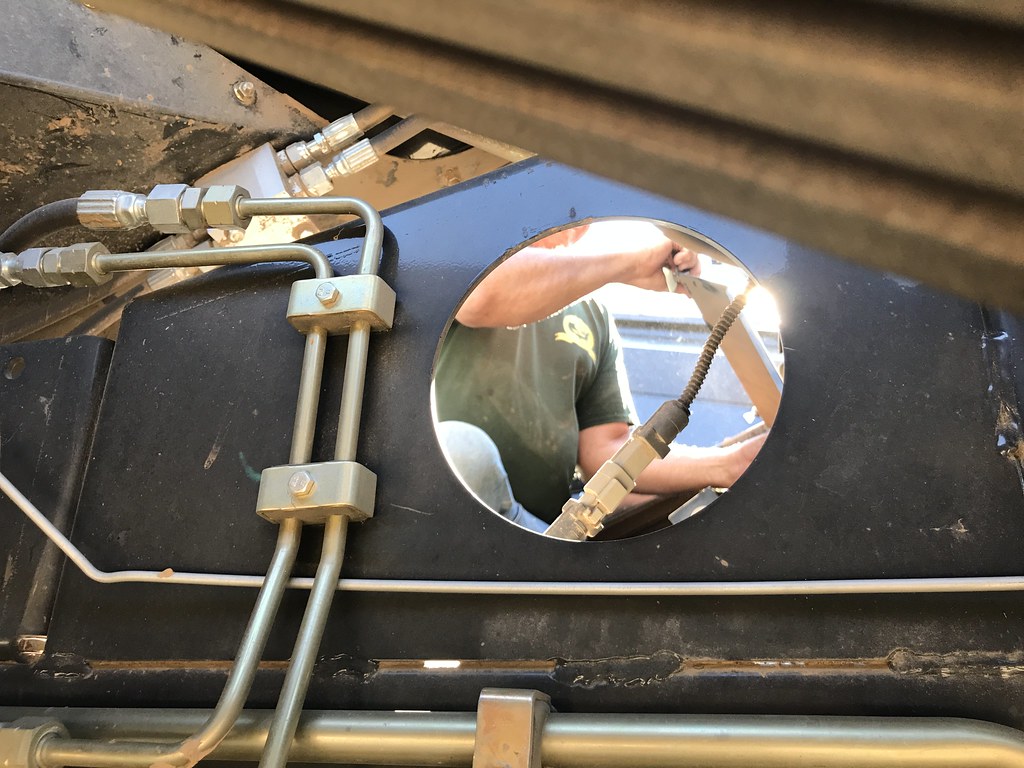 The morning servicing called for adding oil to a gear box.

Jim made some phone calls the next day to a few people asking them to keep their ears open for us. We now have the possibility of a job in the Garden City area. It’s a start – one foot in front of the other. We have to persevere. We have to have faith. If we didn’t believe in a God who is looking out for our well-being, it would certainly make this job much more difficult! God is good ALL the time – it’s just hard to remember we have to let go.

A follower on the Zeorian Harvesting & Trucking Facebook page presented me with a question that I felt was worthy of sharing. “I know it’s hard telling, but do you personally think this is just a low point in the custom harvesting industry that will eventually rebound, or heaven forbid, is the custom harvester demand on a steady decline to where eventually acres will be few and far between every year? You guys seen times this tough before? Hate to even imagine the ‘Great American wheat harvest’ becoming a thing of the past.” My reply was, “I’m hoping it’s just a slump.”

We’ve finished our acres here in Claude (last night – 06/22) and will spend the next several days cleaning equipment, loading and heading north. It was a good run… probably one of the hardest 13 days of non-stop cutting we’ve ever done (thanks to dry conditions)! I’m going to guess the final outcome for yield will be around 30 bushels per acre, and that could be more or less depending on how heavily grazed the field was. The weights were good at 60-62 pounds. And again, no rain delays. 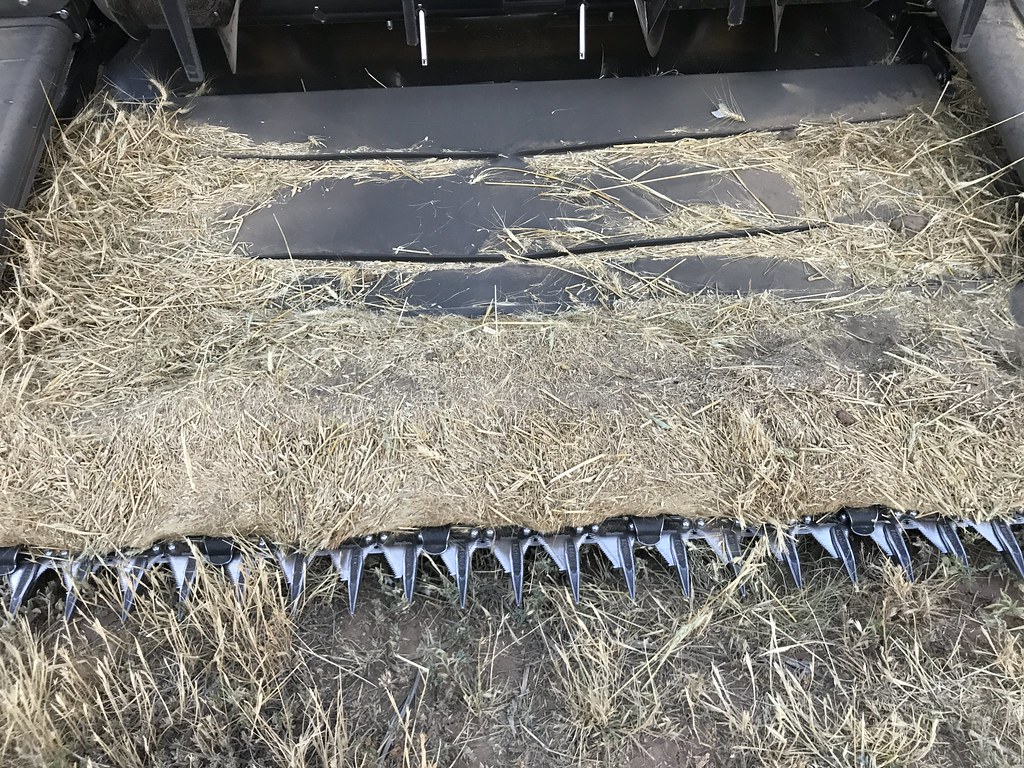 We started the process of cleaning the header last evening after it cooled down from the afternoon high of 106 degrees to 90 degrees. We went from this… 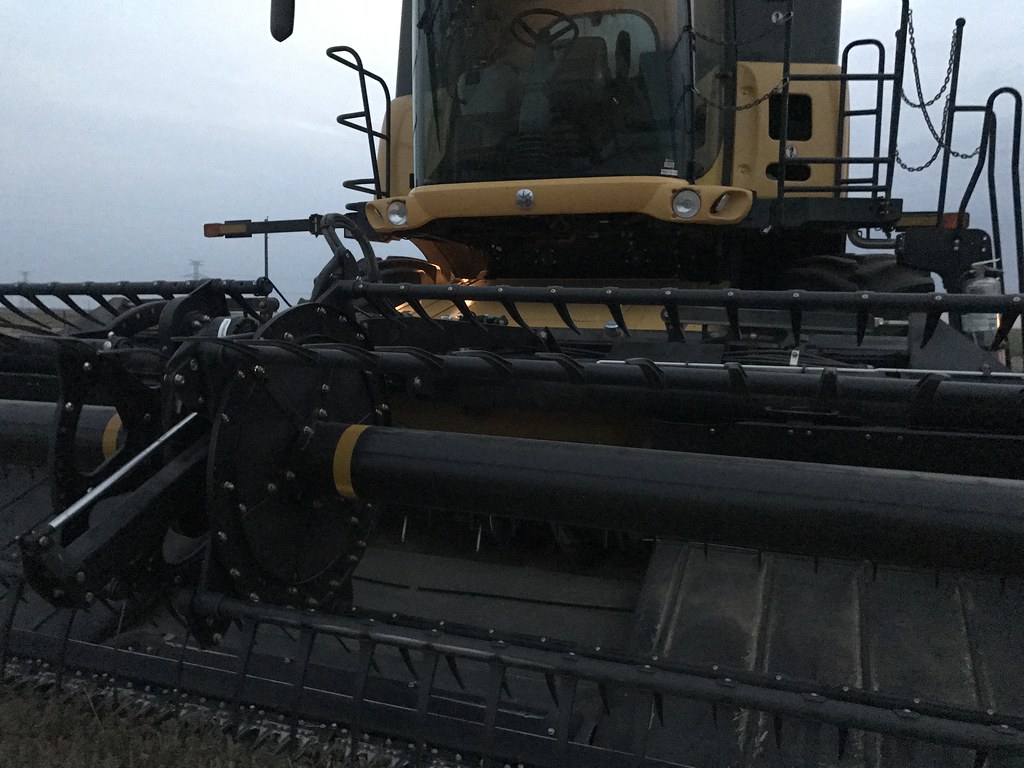