All Aboard Harvest | Tracy: My Harvest Top 10 List
14910
post-template-default,single,single-post,postid-14910,single-format-standard,qode-quick-links-1.0,ajax_fade,page_not_loaded,,qode-title-hidden,qode-theme-ver-11.2,qode-theme-bridge,wpb-js-composer js-comp-ver-5.4.7,vc_responsive

Chadron, Nebraska – This came to me today as I was following Jim and The Beast to the field. YES! I said… field. It’s been quite the week. And when it began on Monday, I would have never guessed we would be making a move northward. It’s been an emotional roller coaster for me; and from what I hear, other harvesters are experiencing the same, crazy feeling.

We finished south of Wallace, Kansas late Monday afternoon. Once the last standing straw of wheat was cut, we decided that regardless of what happened next, the combine and header would have to be cleaned. Jim and I had talked a little about what we thought we would/should do next. We had no acres to move to so we had decided that we’d just clean the equipment up and see if we could park it at the New Holland dealership in Goodland until moving it to Colorado for the millet harvest in September. That’s what we thought when we laid our heads on our pillows Monday night.

Early Tuesday morning, we woke to the sound of a text on Jim’s phone. We both figured it was either news of a dear friend’s death or Jamie letting us know baby #3 was happening soon. It was neither. It was the same friend who had just allowed us to finish the acres they had to leave south of Wallace. “Why don’t you and Tracy just move up here to Chadron, and you can cut some acres we have west of town.” I know why Jim didn’t jump on that right away and say, “Yes! Sure! We’ll be right there.” Instead, he told Bruce he would talk it over with me and get back to him.

Have you ever had a plan made only to have that plan changed? It really does mess with your brain – or at least it does with mine. We were convinced we were supposed to go home. Plans in our head to make that happen had begun… and now they changed to “go time” once again. Jim didn’t jump on that proposition right away because of two reasons. 1) We had come to grips with the idea of going home. 2) They didn’t have to give those acres away. It wasn’t like the acres we had just finished for them. They had plenty of time to do the job. It almost felt like we were taking something that wasn’t ours. We both knew they needed those acres as bad as we did, and yet they were willing to sacrifice to share with us. What do you say? How can you repay their kindness? God is good ALL the time – it wasn’t a coincidence.

“Instead of being motivated by selfish ambition or vanity, each of you should, in humility, be moved to treat one another as more important than yourself. Each of you should be concerned not only about your own interests, but about the interests of others as well.” Philippians 2:3-4

Jim called Bruce back and told him we’d take him up on his offer and would do our very best to get everything to Chadron by the end of the week.

So, now, back to what I was thinking about while following The Beast… my top 10 list.

Things you can count on happening while on harvest:

10. When it breaks, it can surely be fixed with duct tape and baling wire (most of the time).
9. While on a parts run, you realize you forgot your wallet in the trailer house… after arriving at the auto parts store. The guy behind the counter trusts you will return with payment as he hands you what you came in for.
8. The day you clean the combine and header will also be the hottest day of the week… with no wind.
7.  You wake up wondering where you are on a daily basis.
6.  You’ll ask someone else, “What day is this?”
5.  Unfamiliar roads will cause anxiety. Thank goodness someone taught you your directions!
4.  The boss will ask you a question over the two-way at the most inopportune time.
3.  You will experience the best sunsets… ever!
2.  The sweet smell of the night air mixed with wheat straw will remind you why you love this job.

And the No. 1 thing you can count on happening while on harvest:
The best friends you’ll ever have will be the ones who share the same love and passion for this lifestyle as you do!

Throughout the years, I have had numerous people ask me what it is I like most about this nomadic lifestyle we lead. Two things always stick out above the rest (and there are many). The forced time with the family was the best and then the next is the people you meet and the friends we have. Jim always told me, “Friends don’t pay the bills.” This afternoon, he told me he needed to apologize to me. I had no idea where he was going with this. He said, “I always disagreed with your thoughts on this lifestyle regarding the people we meet and the friends we have. I take it back…friends can pay the bills.” You see, to me the best part of this job is the people whom we call friends. If you don’t have true friends in this business to share your ups and downs with, it just wouldn’t be worth the craziness.

Friends show their love in times of trouble, not in happiness.
-Euripides

The week in pictures: 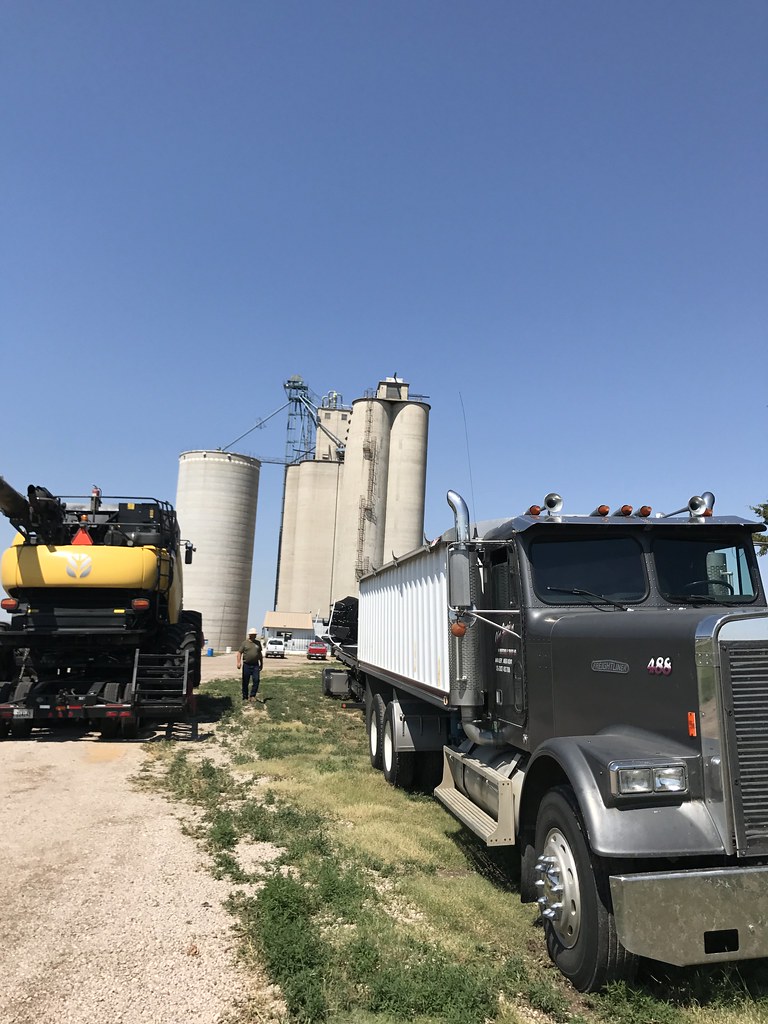 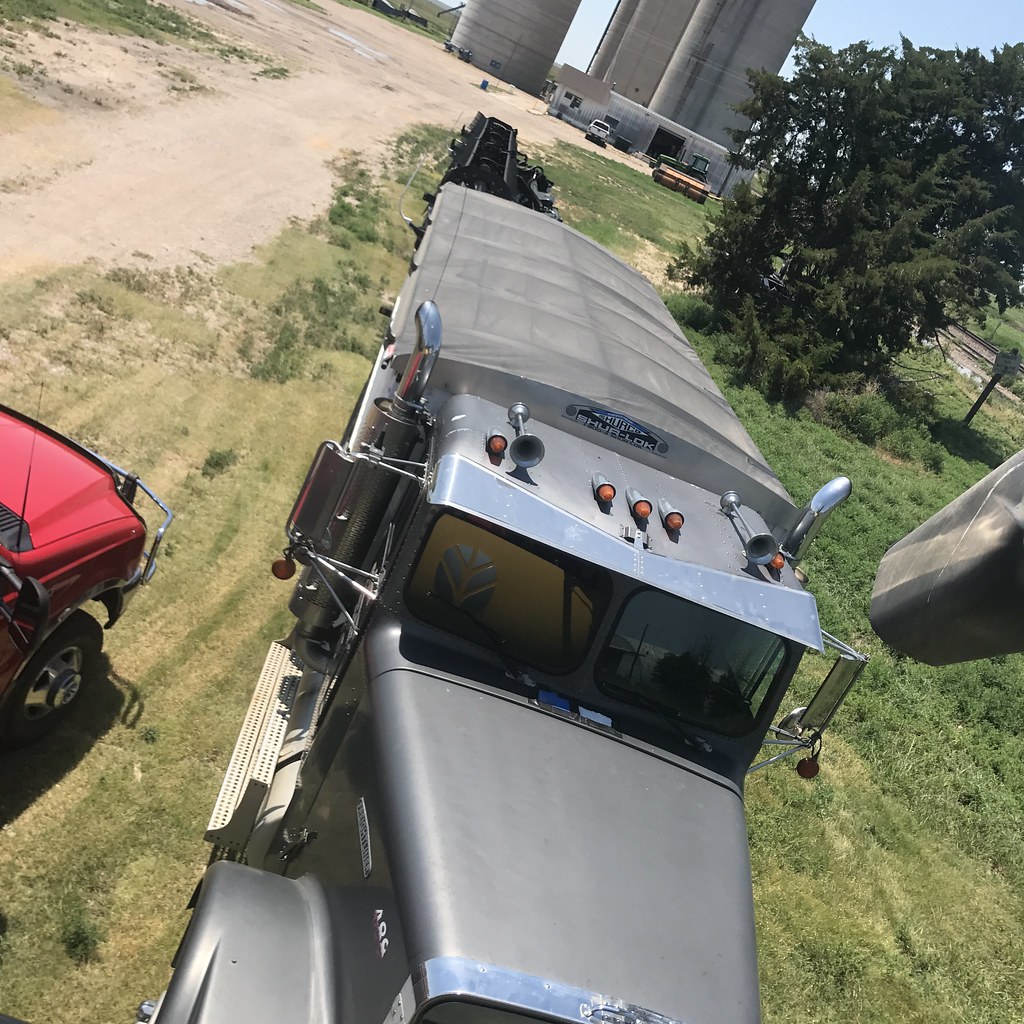 Wallace, Kansas – Until now, I hadn’t noticed the reflection of The Beast in Frank’s front window. 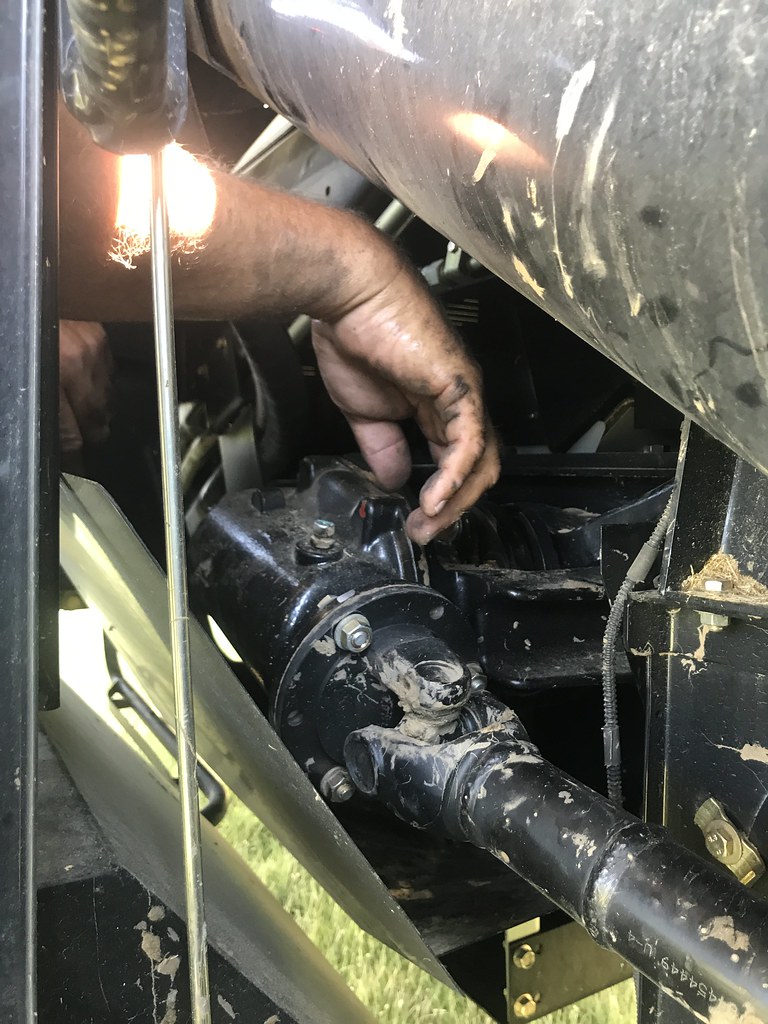 The hands of a man who works hard to keep everything running as smoothly as it does. We had to replace this gearbox before we could start cutting. 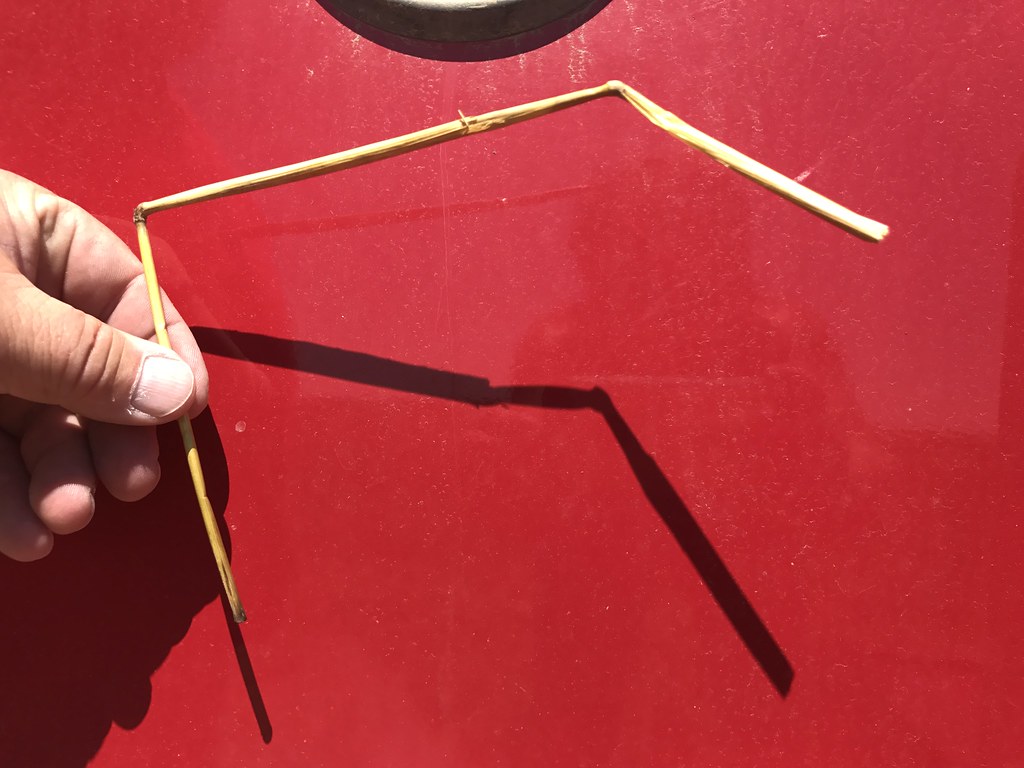 More visible signs of the heavy, wet snow that fell on this crop in April and how resilient the plant is. 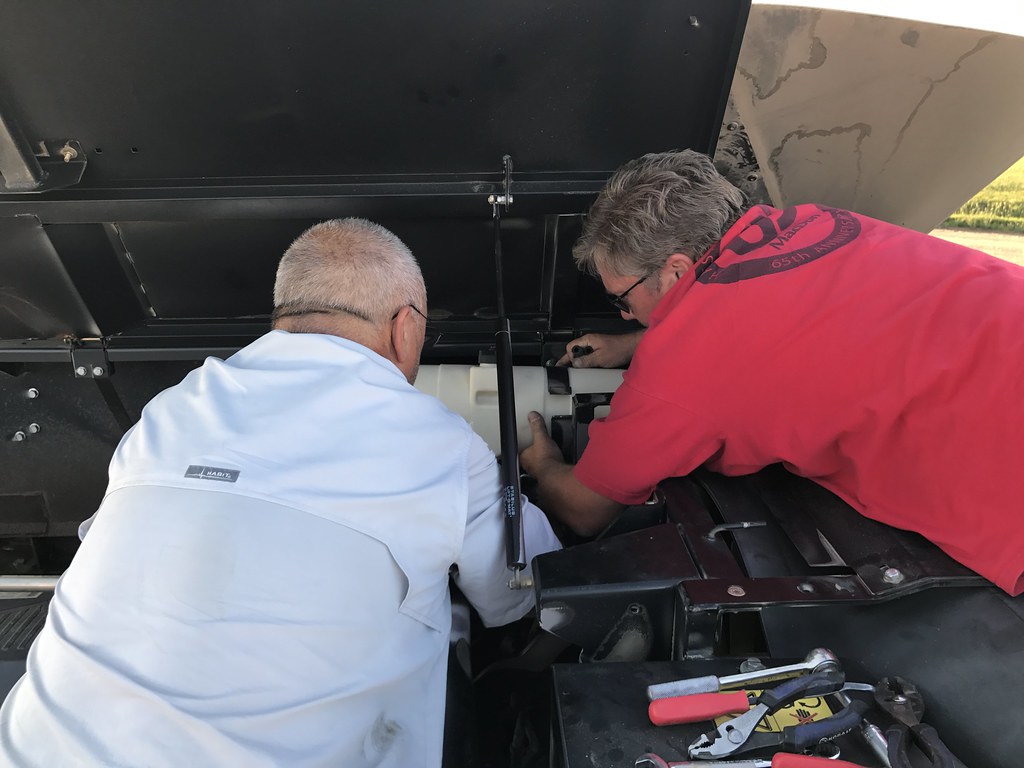 Thank goodness Kent (Braathen Harvesting) was in the field this day. It took six hands to make it all work. 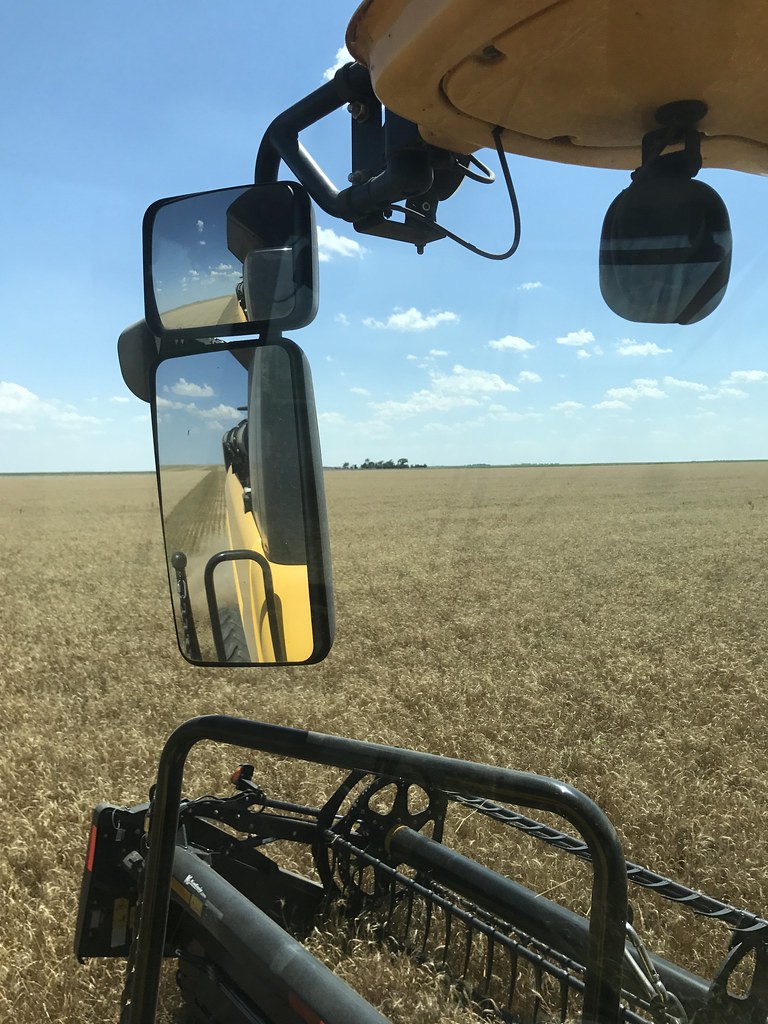 Wallace, Kansas – Wheat had been snowed on in April and also hailed on. It still had an end result of 25 bushels per acre. 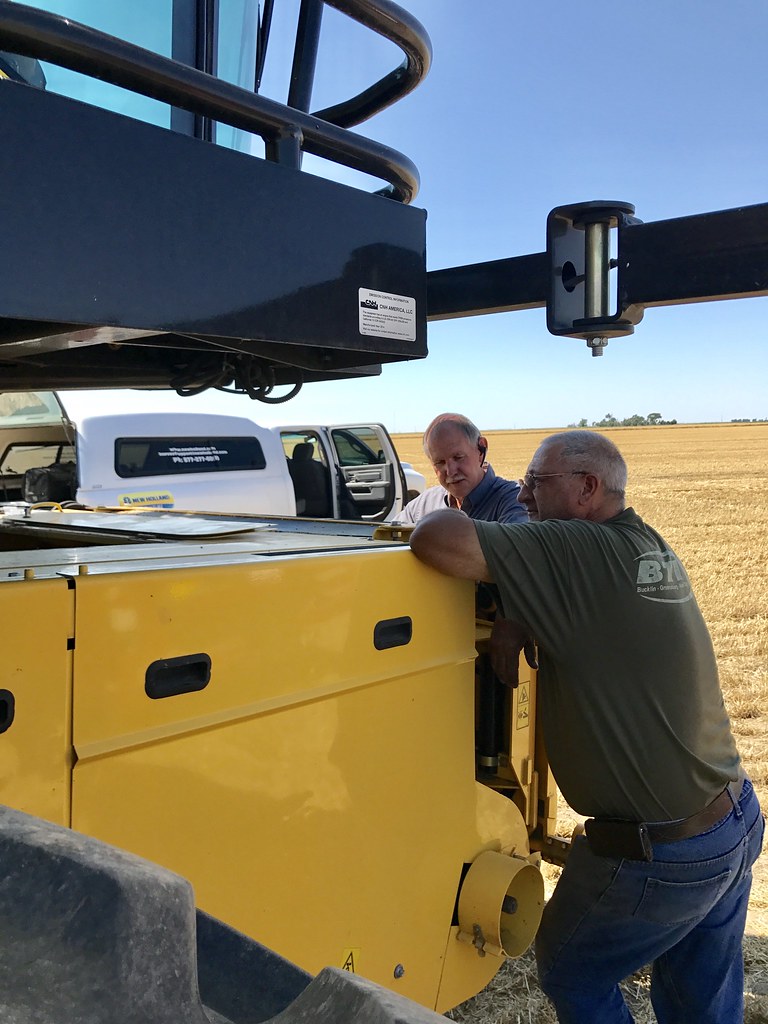 One more minor issue while cutting in Wallace required a visit by Monte and the New Holland Harvest Support pickup. 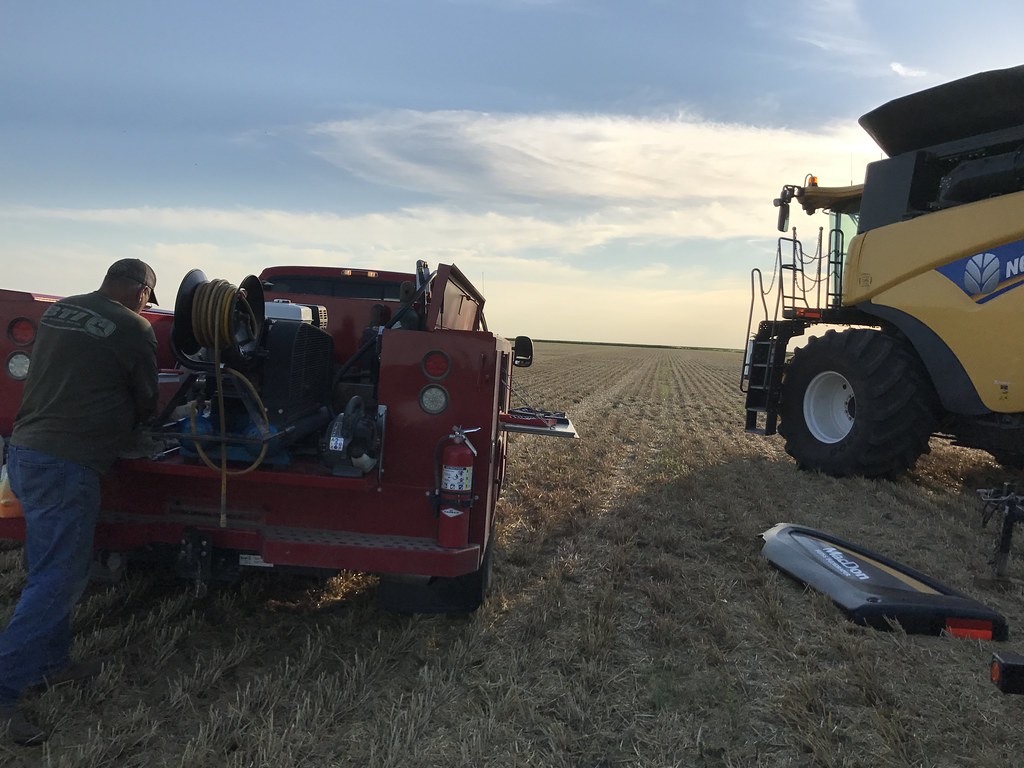 Finished with cutting… now it’s time to start the clean up! 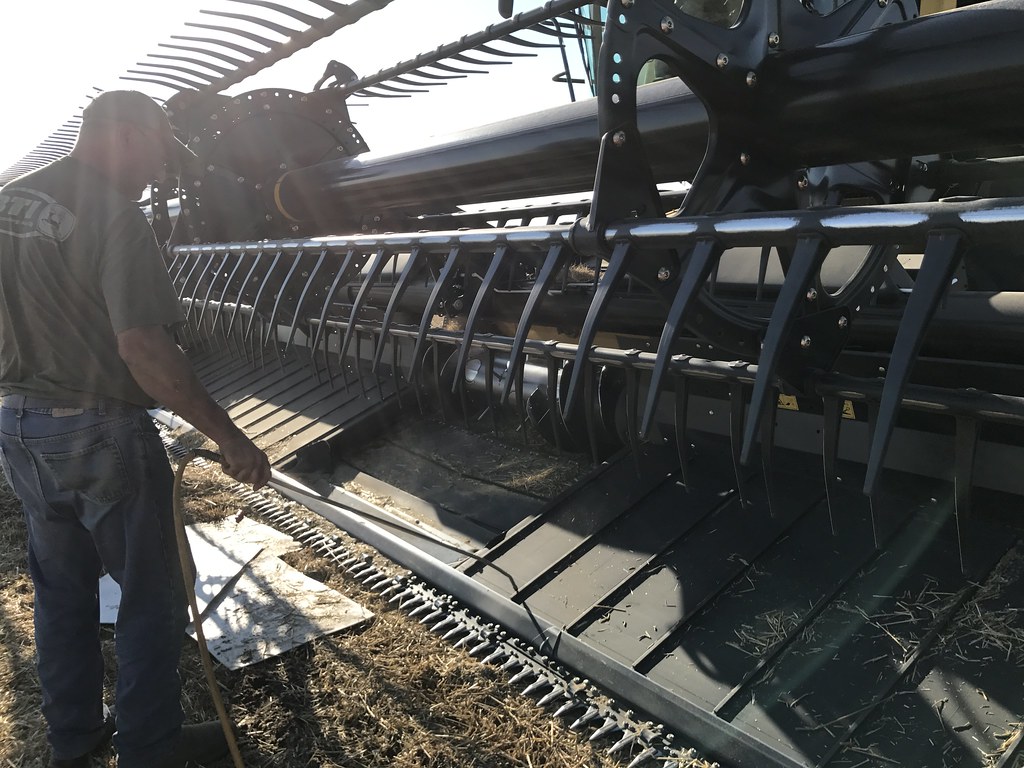 Cleaning the header of dirt, debris and chaff.

I do more than just drive all the time. 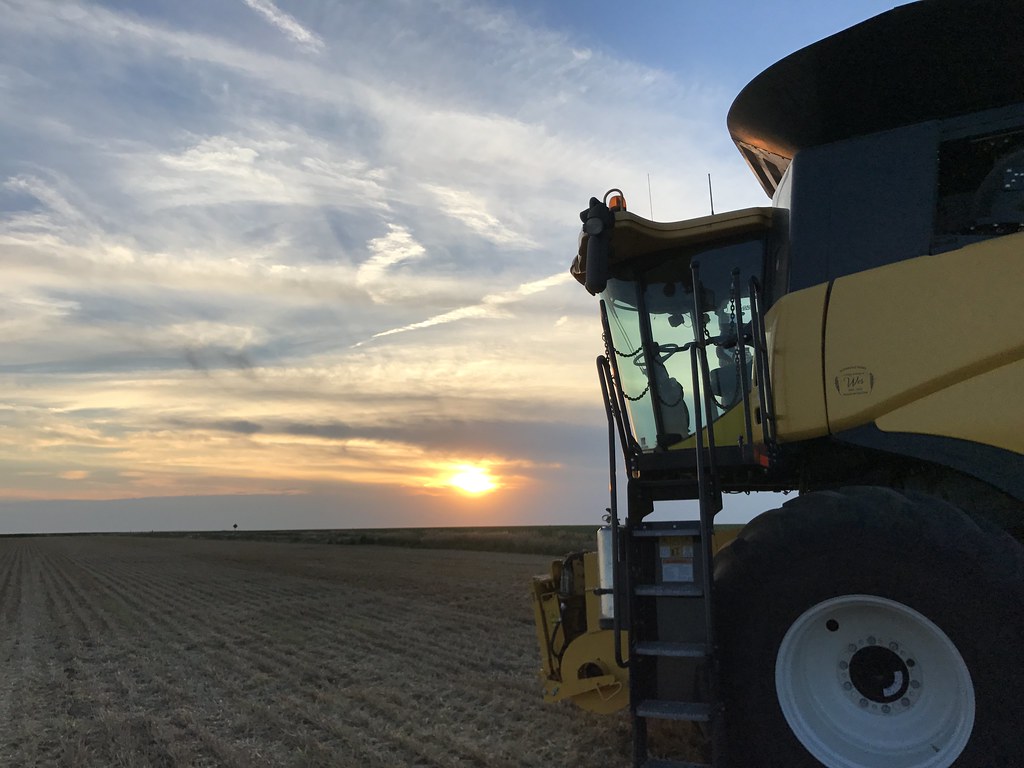 Final sunset in the field south of Wallace, Kansas. 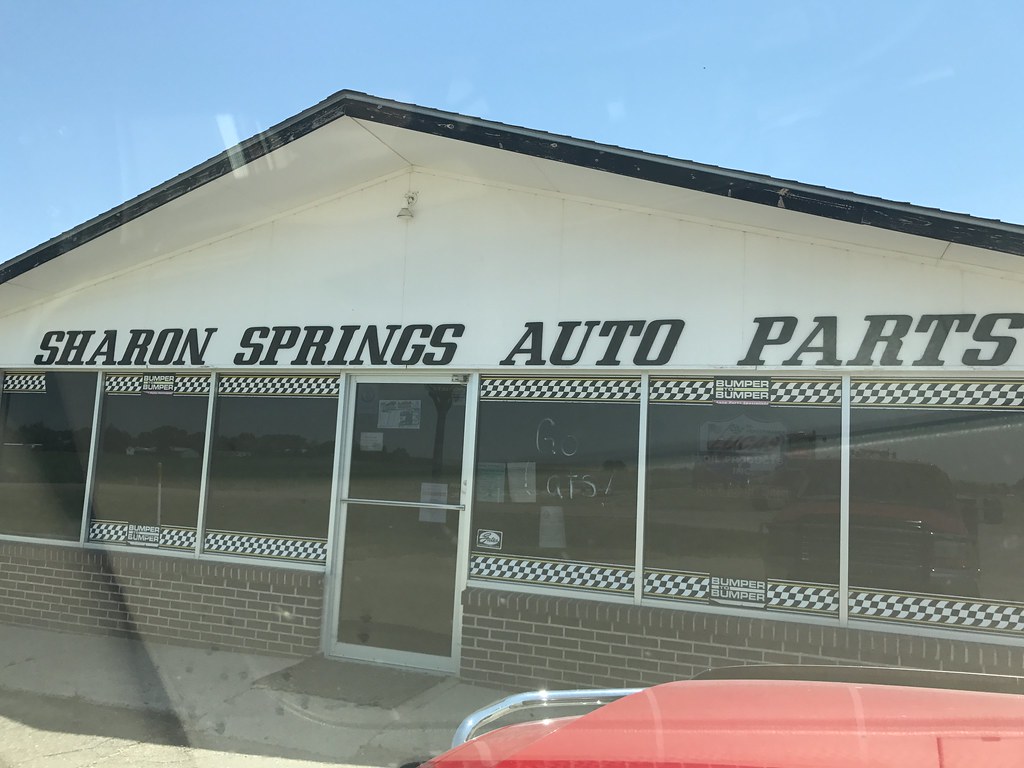 Yes… I really did forget my wallet in the trailer house. And, yes, they really did let me come back and pay for the item I walked out the door with. Small town USA is the best. 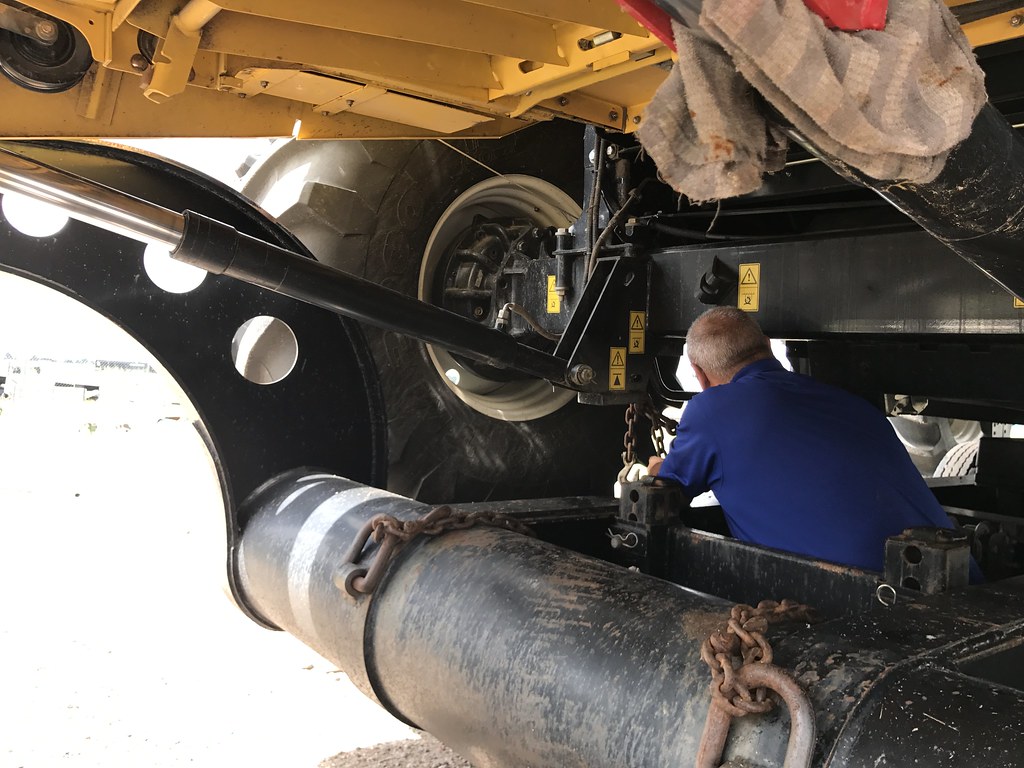 Chaining down the combine for the move to Chadron, Nebraska. 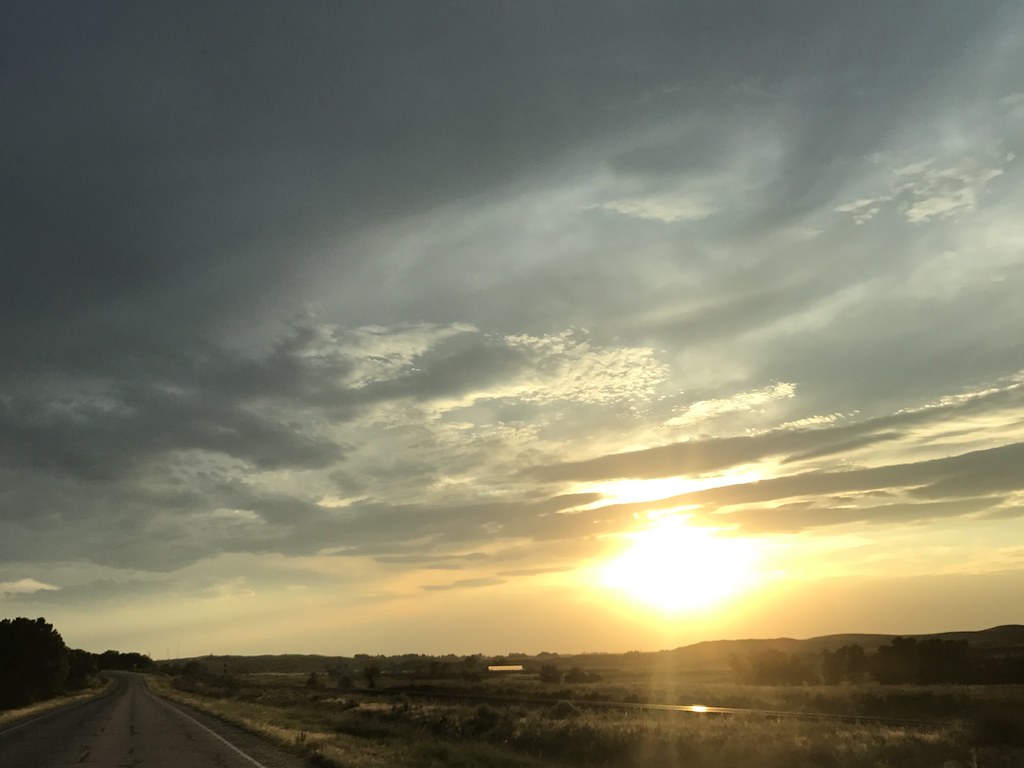 Somewhere in Colorado on the way to Chadron with the first load. 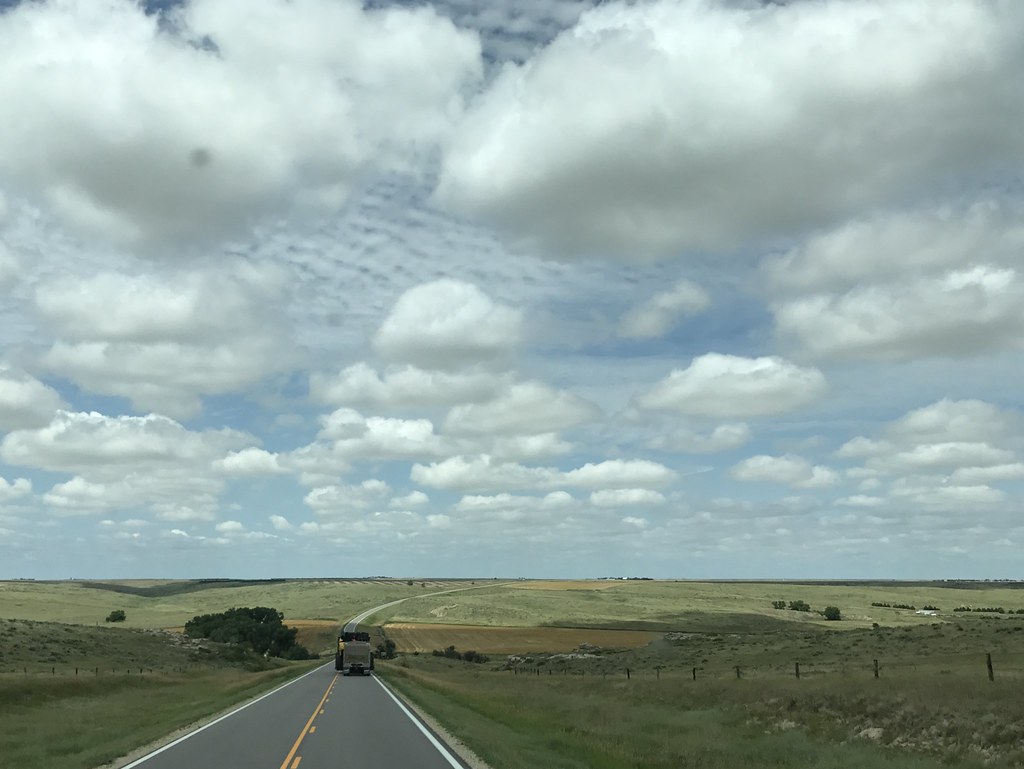 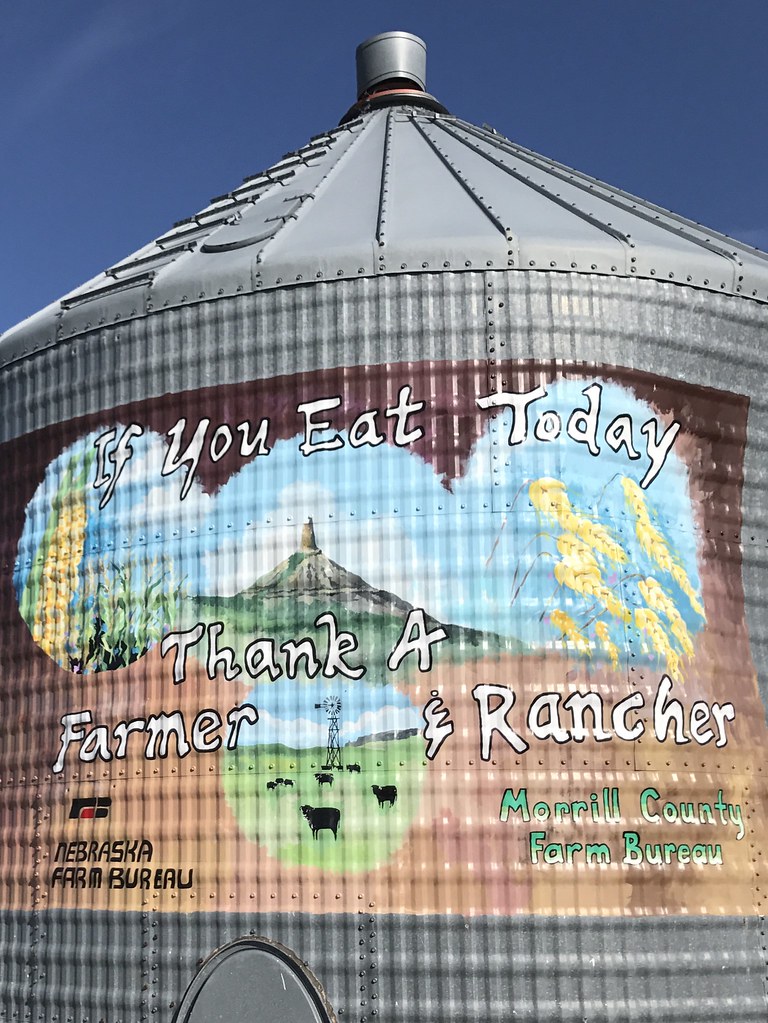 This can be found along Highway 385 – south of Angora. 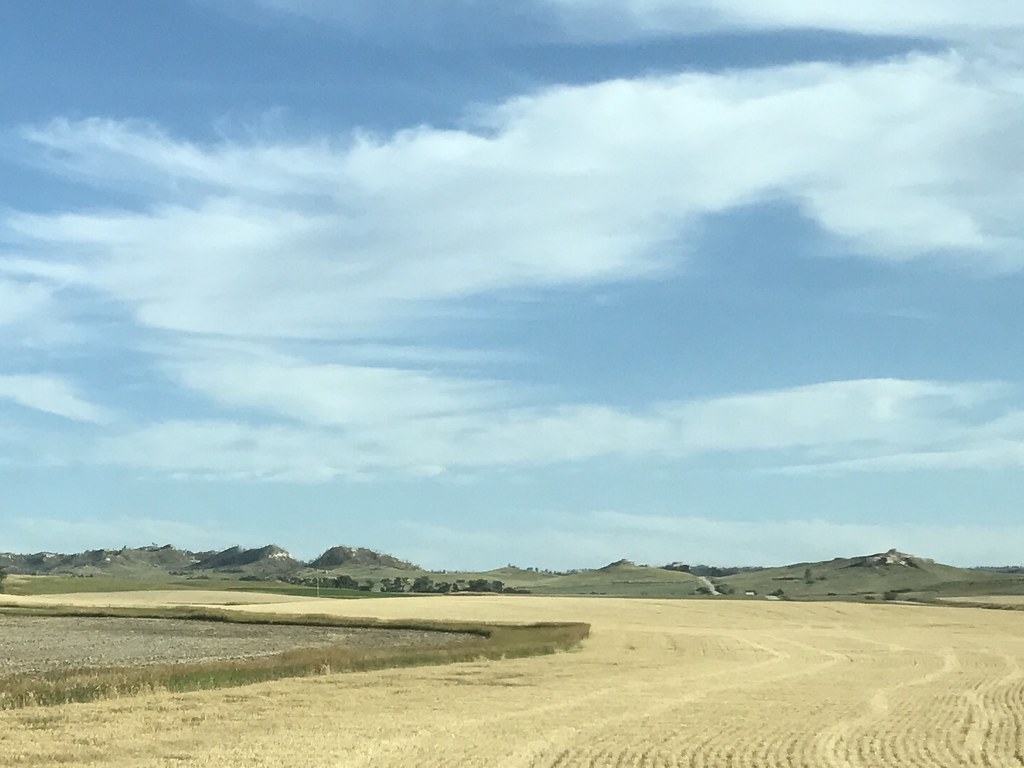 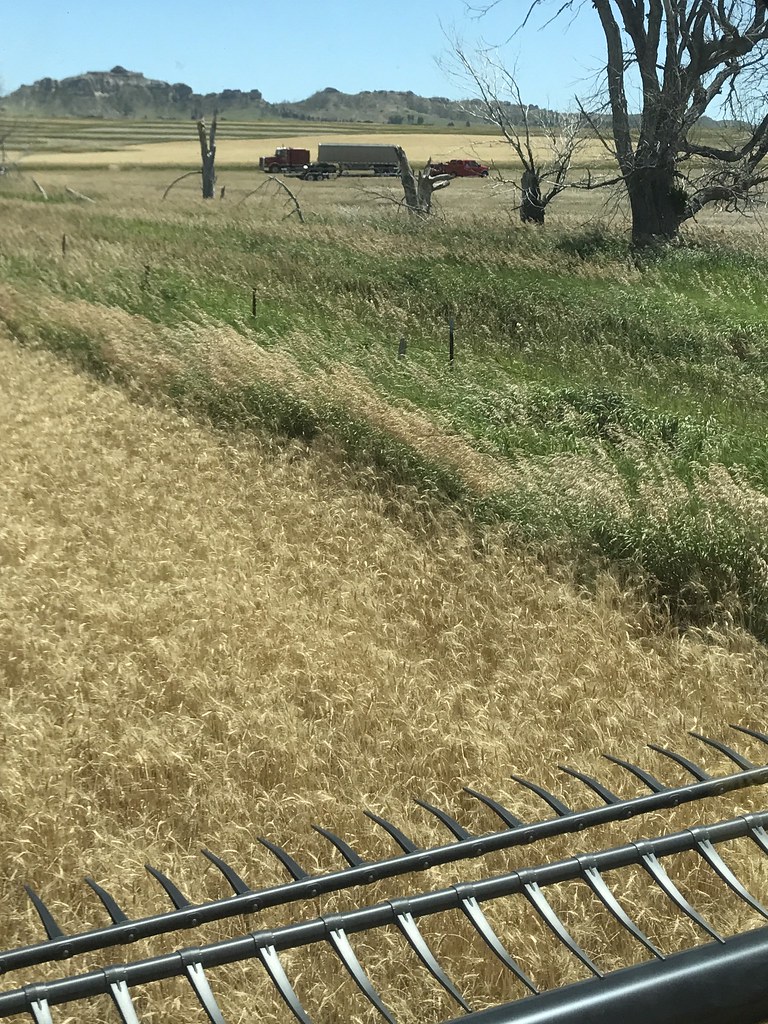 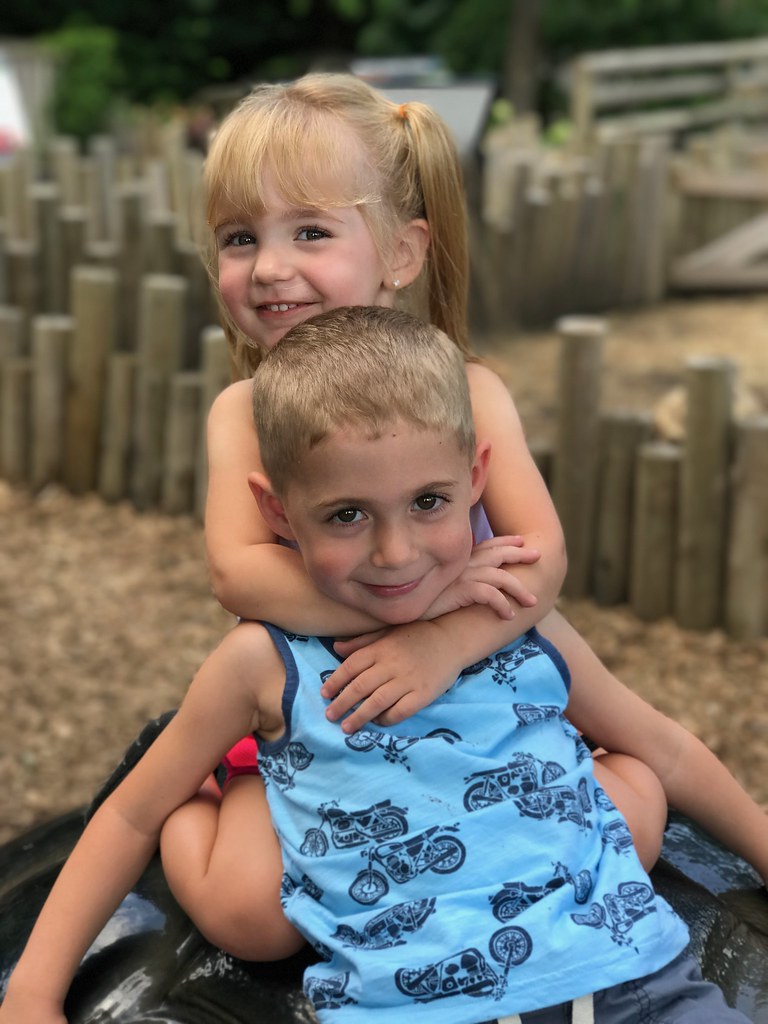 Still only two. Jamie is convinced they have devised a plan to do everything they can to make her life hard right now. She calls them Bonnie and Clyde.