All Aboard Harvest | Tracy: The road heading north
15107
post-template-default,single,single-post,postid-15107,single-format-standard,qode-quick-links-1.0,ajax_fade,page_not_loaded,,qode-title-hidden,qode-theme-ver-11.2,qode-theme-bridge,wpb-js-composer js-comp-ver-5.4.7,vc_responsive 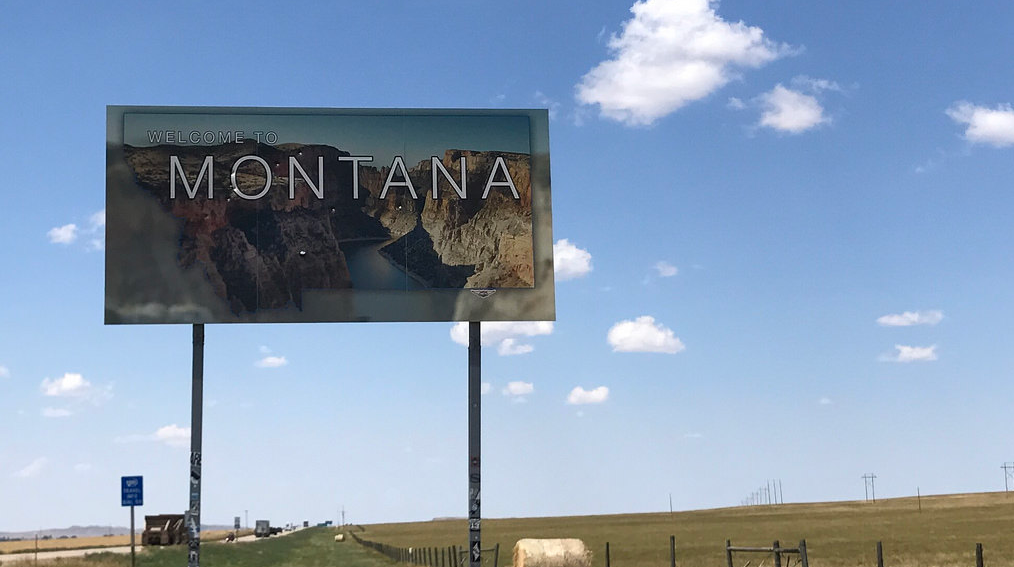 Chester, Montana – It took us almost three full days to get to Chester, and we were driving the speed limit most of the time! I think it was the late starts (and extended visiting) that probably had a lot to do with the time frame.

On Thursday, we didn’t leave Jamie’s house until well after noon. We had to get in a couple more baby snuggles before we headed north again. Then, we made it back to Chadron for the night. It was the craziest thing, though. As we made our way down the hill into town, it was completely dark. Apparently, the entire town of Chadron was without power due to a storm that had rolled through earlier. We set up camp in the Walmart parking lot, opened the windows of the trailer house and went to bed. It was all of like 9 p.m. 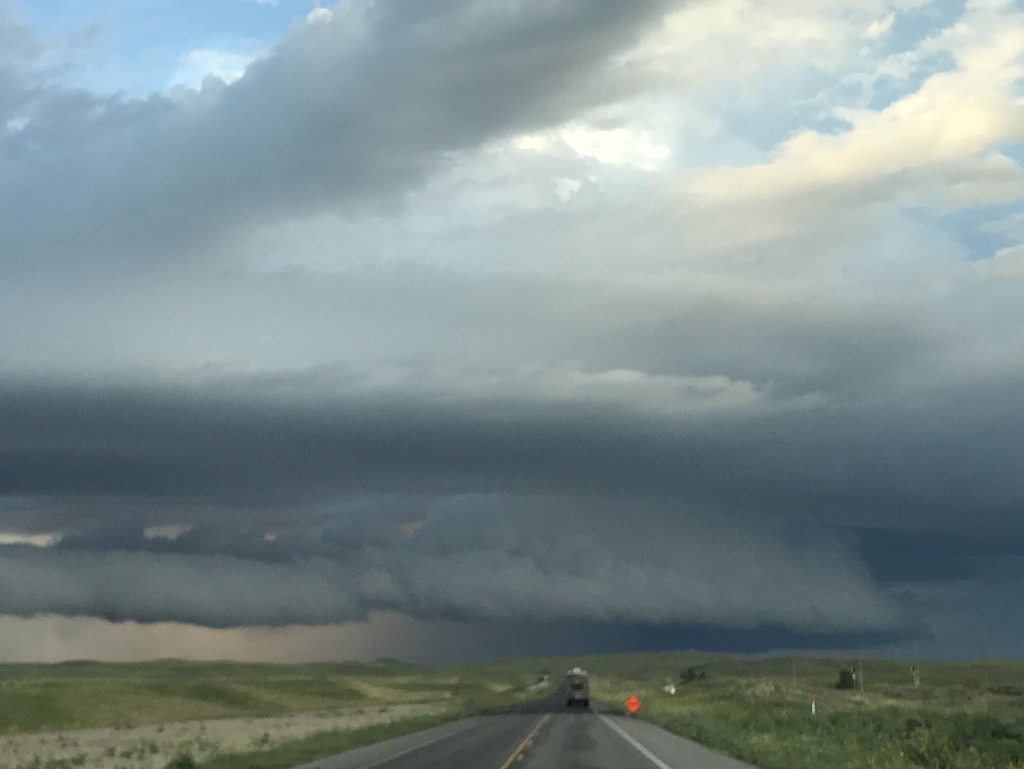 This may have been the storm that hit Chadron earlier in the afternoon causing the power outages. This was taken just as we were making our way into Alliance, Nebraska and after multiple stops. Jim kept watching the radar and made the stops to allow the storms to pass on before we reached them. Good call!

Day No. 2 started out fairly well. We had lunch at our favorite hangout (the Belle Diner) in Belle Fourche, South Dakota and away we went. 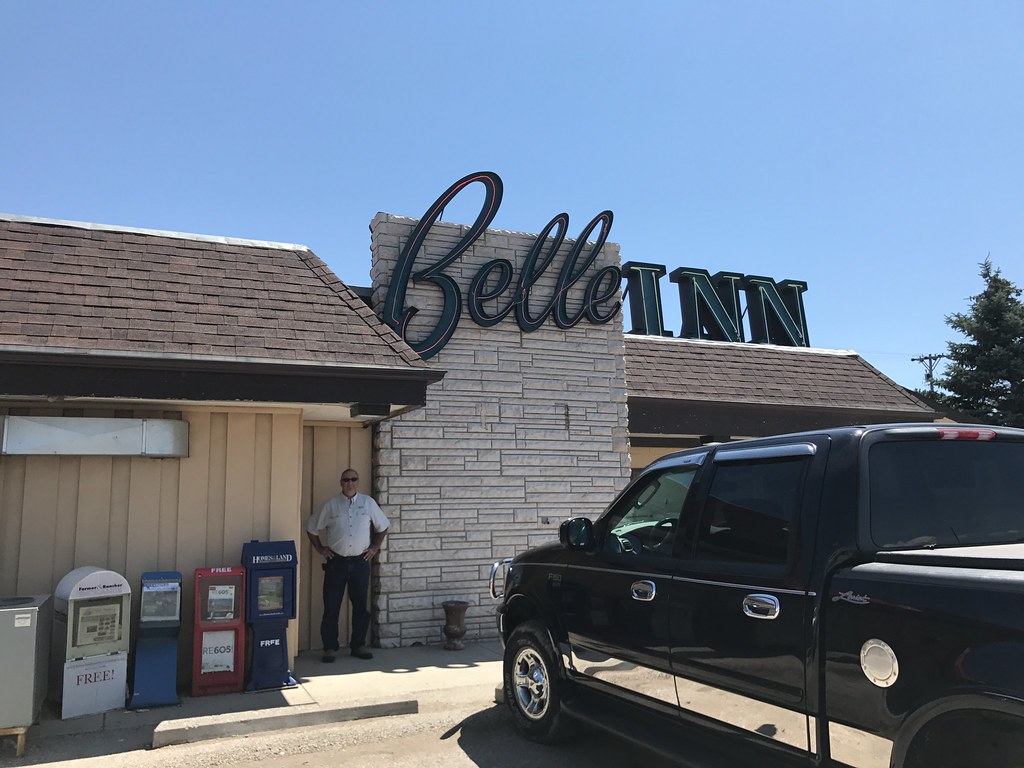 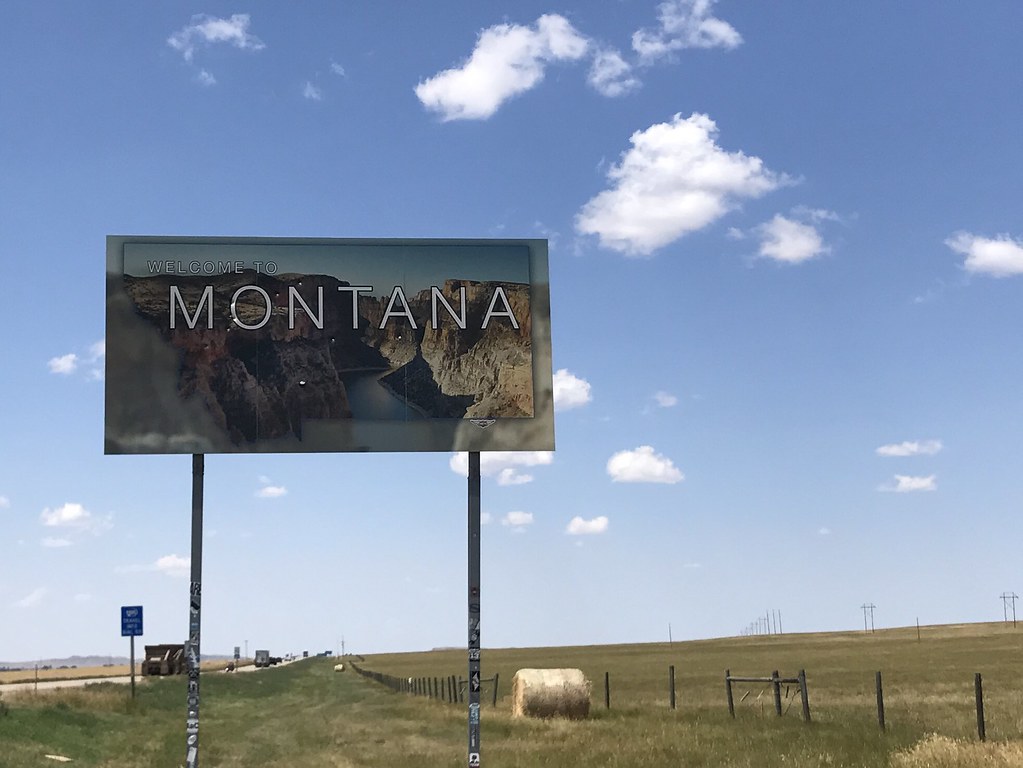 The sight of this sign warmed my heart. I love this state, and it just felt good to finally be crossing that state line again. We used to go to Jordan to cut wheat. The first time was in 1981 with my grandparents. The Z Crew pulled into this town for 31 consecutive years. We stopped making the pull just a couple of summers ago. 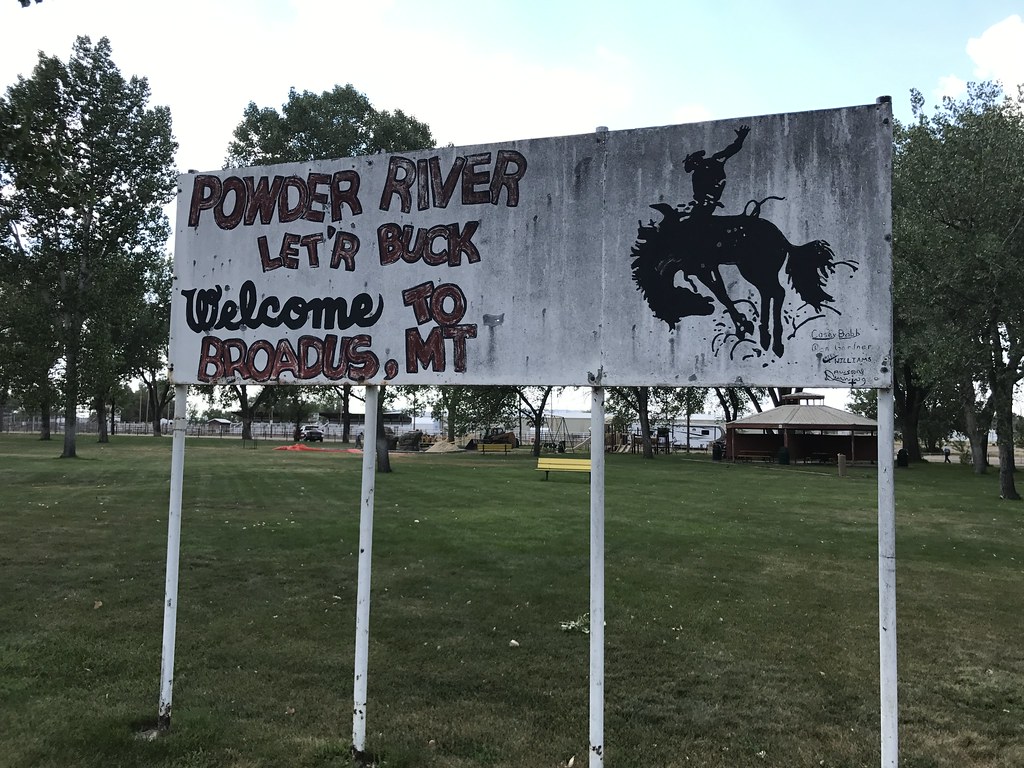 Taking a picture of this sign became a tradition, which started when I was with my grandparents on harvest for the first time in 1974. After we started coming to Montana as a family, Broadus was a required stop for the annual picture. It’s not quite as much fun now without the girls and seeing the changes over each year. Maybe someday there will be a picture with grandkids in it. 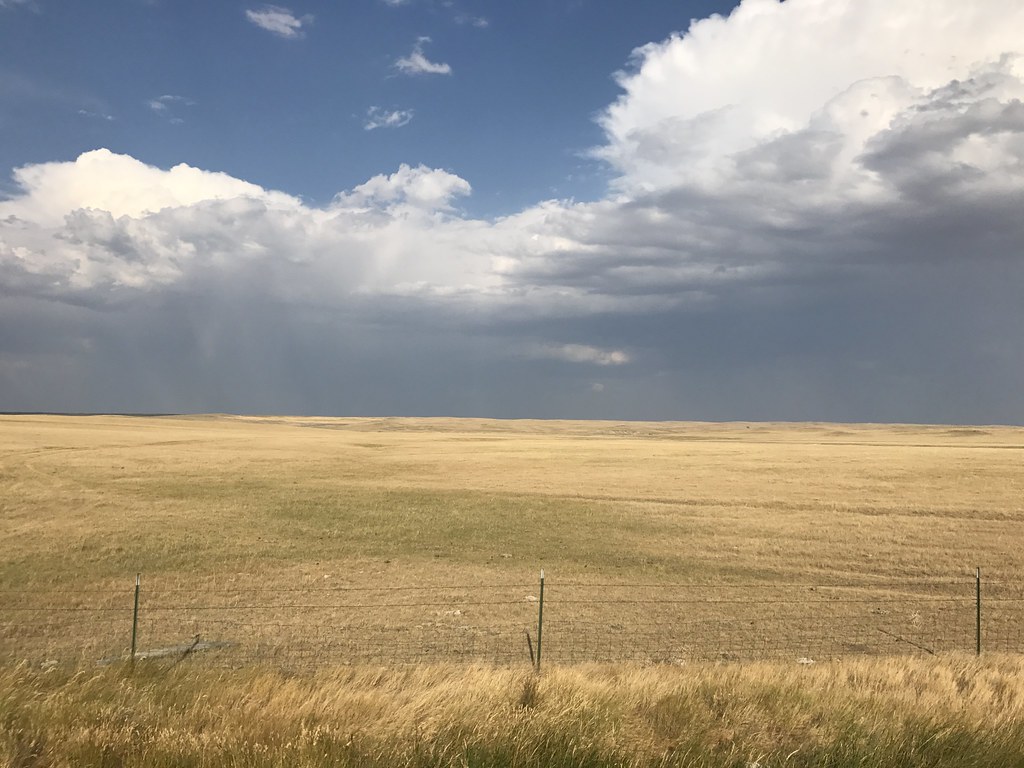 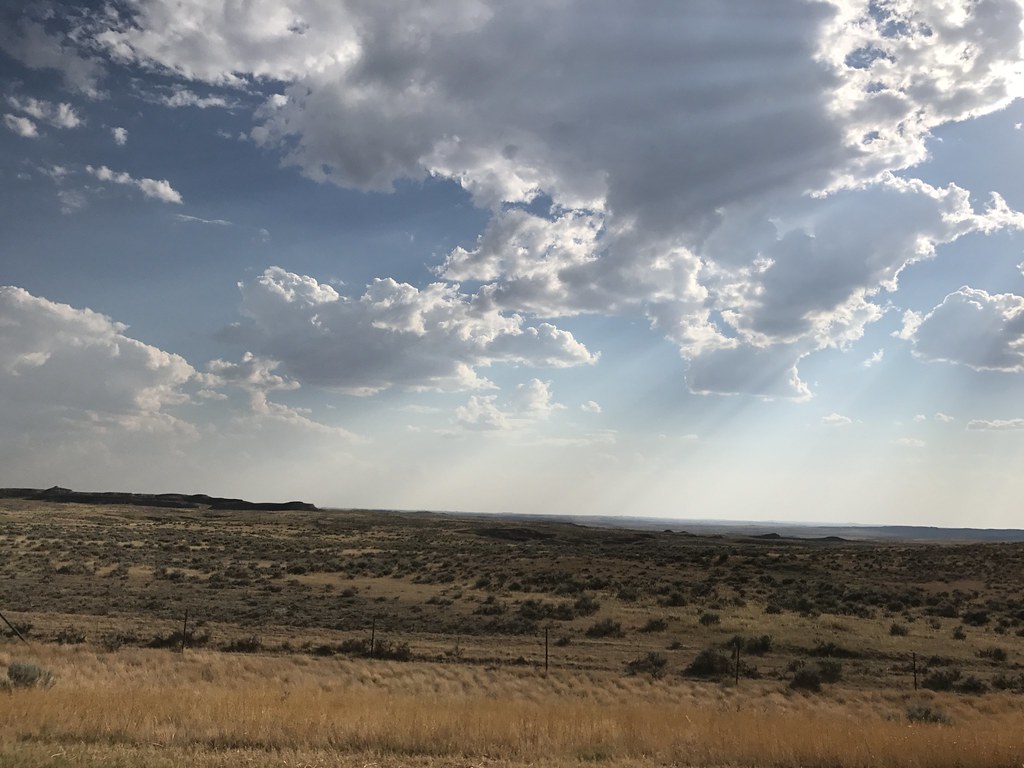 Somewhere along Highway 200 between Miles City and Jordan. On top of this hill (which is one of my favorite points along this road), you can see forever! 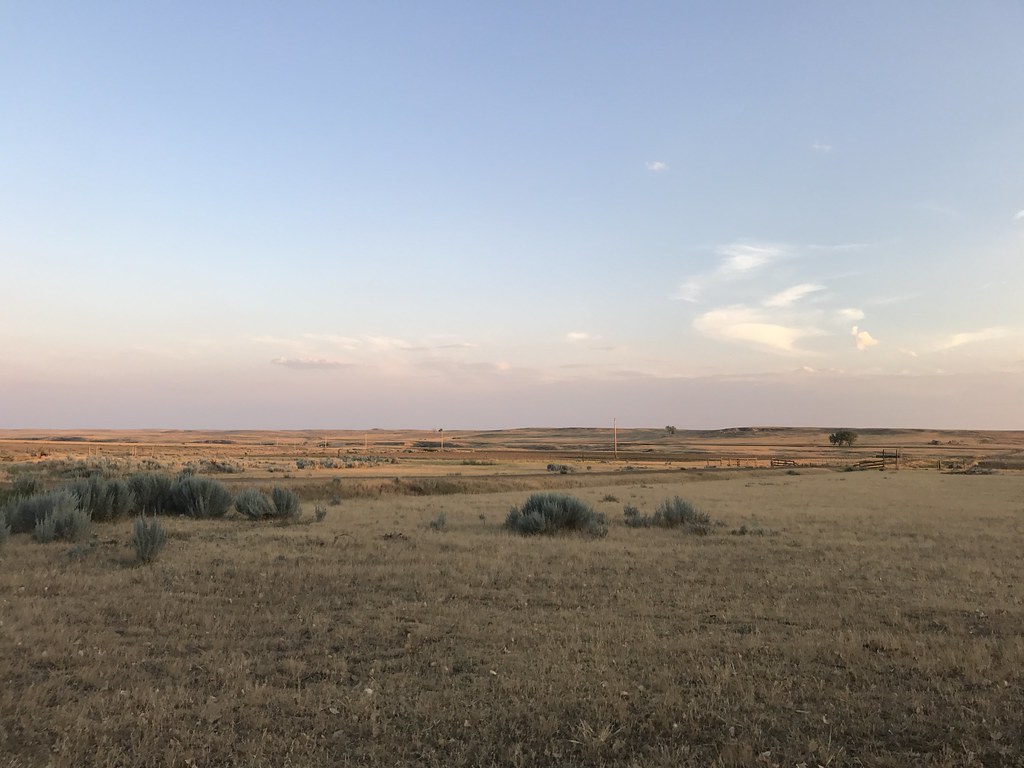 Typical Eastern Montana sunset with so many beautiful colors. This picture doesn’t do it justice. Are you familiar with Charles M. Russell’s paintings? Now, he can paint what you see! If you’re not sure who he is, please take time to Google his name. His pictures of Eastern Montana are spot on. 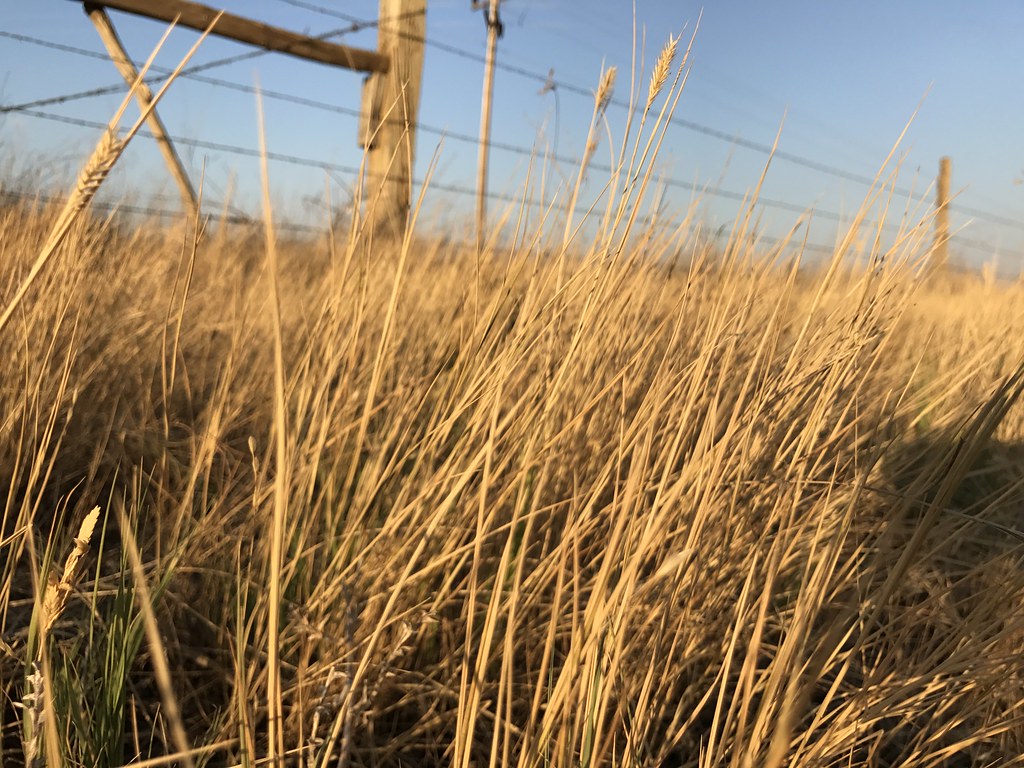 Eastern Montana is experiencing the driest year in over 100 years. The Jordan area has received just a bit more than 3 inches of rain since January 1. The ranchers are VERY concerned about keeping their cattle and making everything work. You can see why they are also battling fire!

We decided to spend the night in Jordan to hopefully say hello to a couple of our friends. The town was a buzz due to the wildfire activities. In case you haven’t heard, lightning sparked four different fires the evening of July 19th. Add fierce winds to the pictures, and it grew very quickly to where nearly 300,000 acres burned over the past week. The outpouring of donations (food, water, hay, vet supplies, fencing supplies, etc.) from all over is simply amazing to me. There are so many good people in this country. But it was the multiple loads of hay and fencing supplies we met on the road that warmed my heart the most. The people of Garfield County are some of the hardest-working people I know, and to watch this monster of a fire TRY to beat them down broke my heart. They’re tough, though, and I know they will survive. 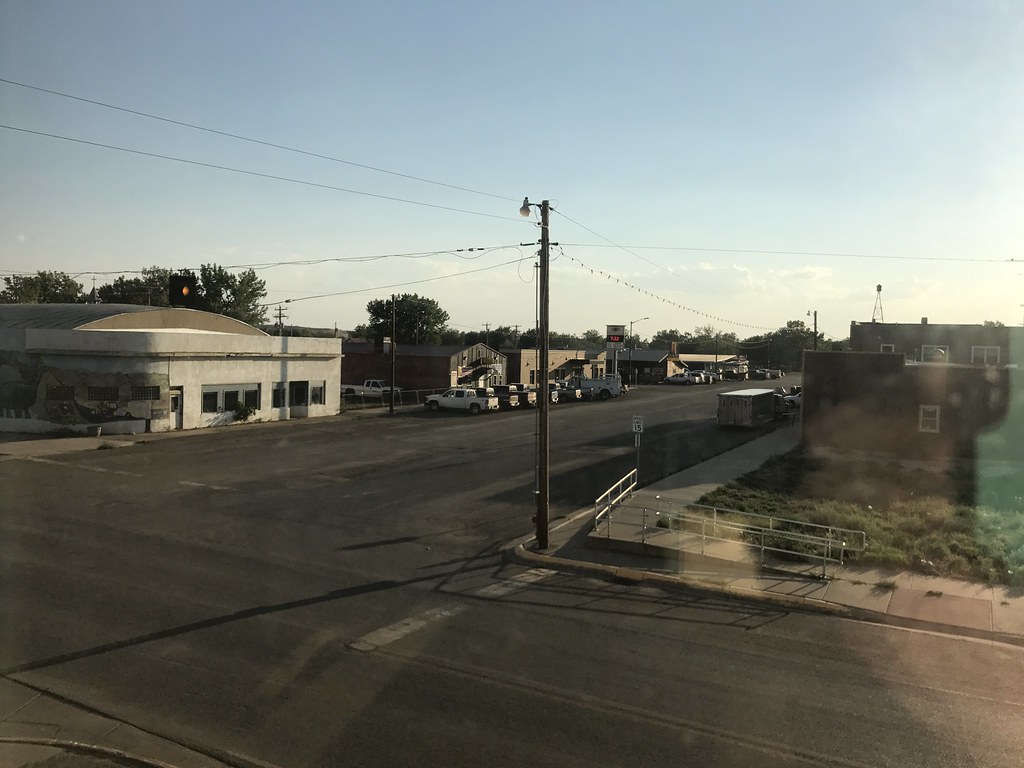 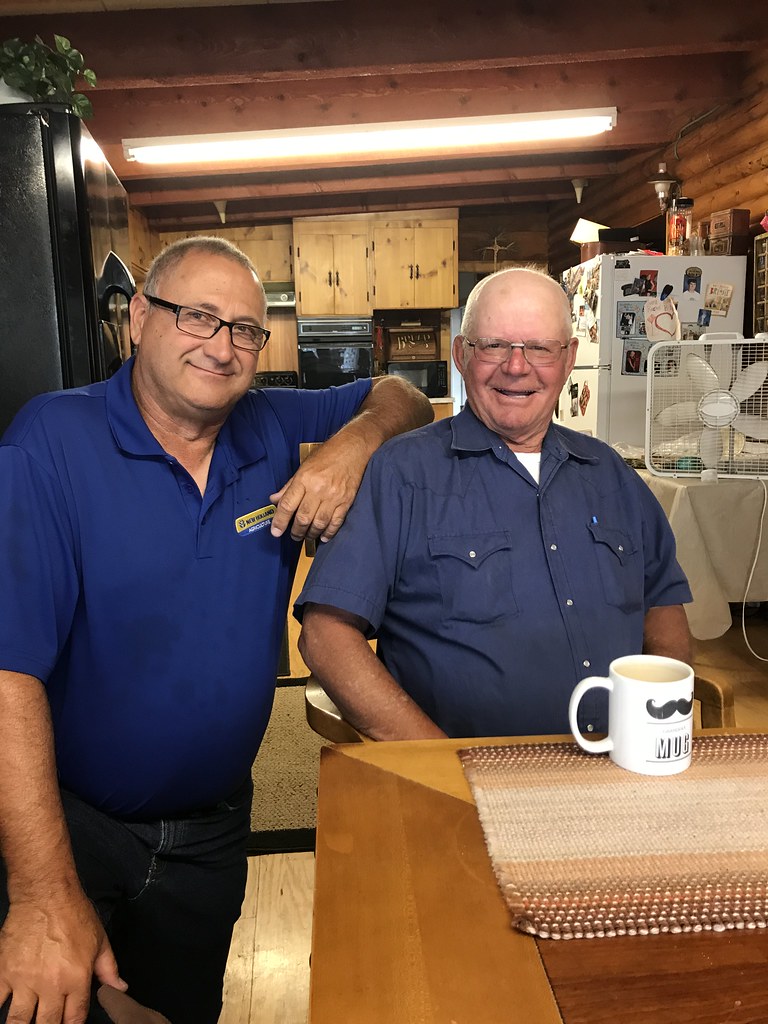 Jim and one of our many longtime friends in Jordan. We dropped in on Tom and Shelley in the morning for coffee and a “catch-up.” We’ve been going there long enough that we’ve had to say, “see ya later” to quite a few of the people we used to look forward to visiting with. I have written so many posts about Jordan and the people we have come to love on my personal blog. If you’re curious and would like to read more, type “Montana” in the search bar and start reading. Here is one that might help explain a bit more about how it has become one of our most loved areas. When the girls were little, they would even attend school there until it was time to go home. 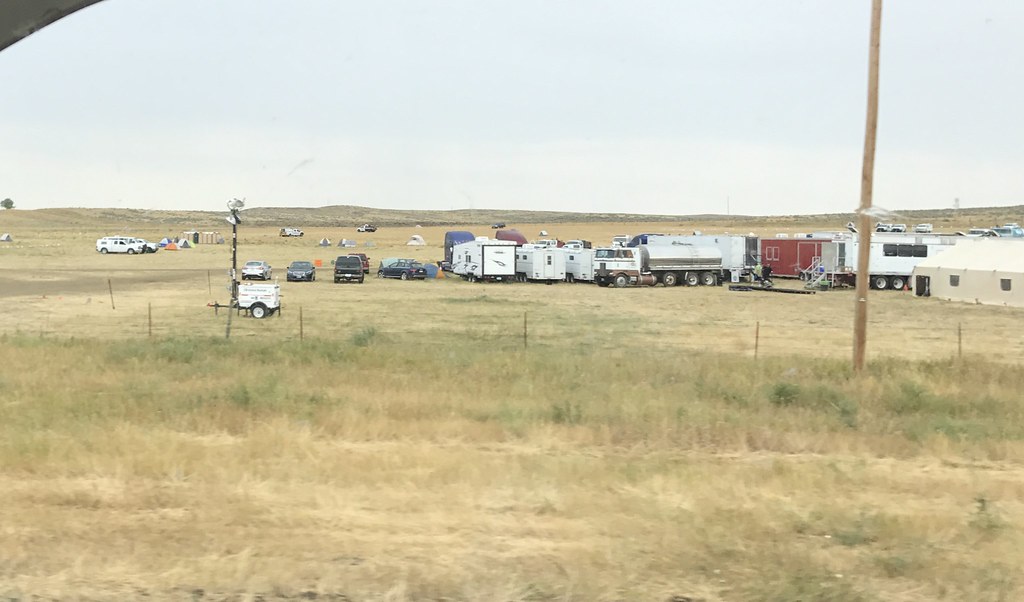 Fire camp set up in Sand Springs. This is the most activity I’ve ever seen in this community! 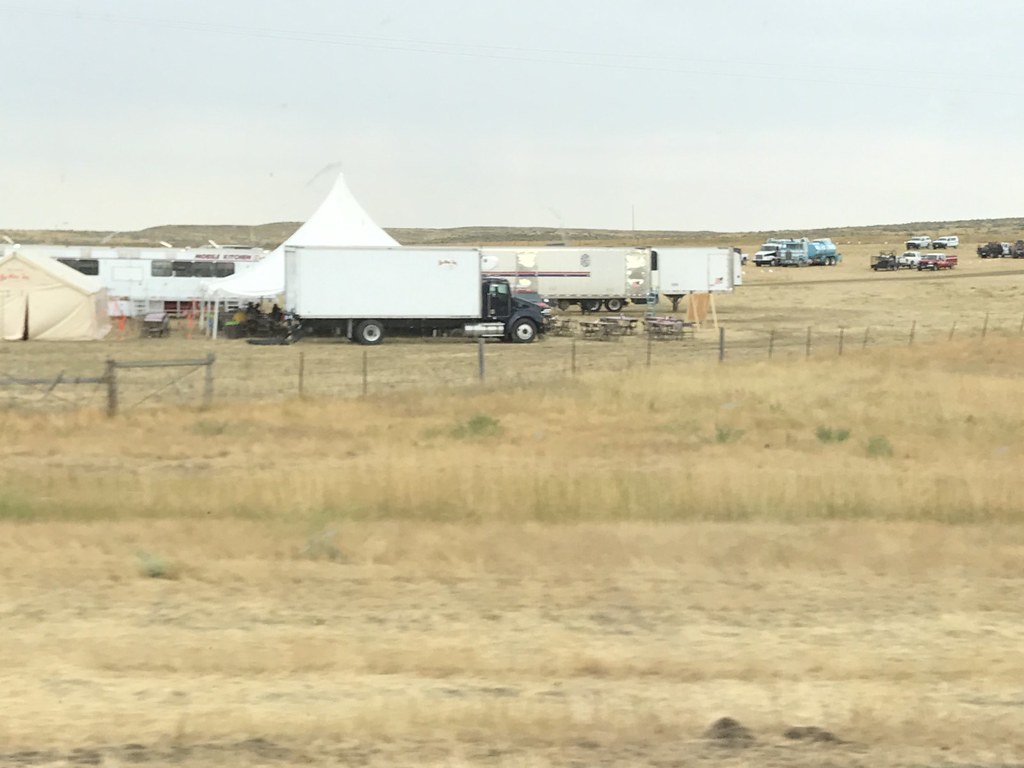 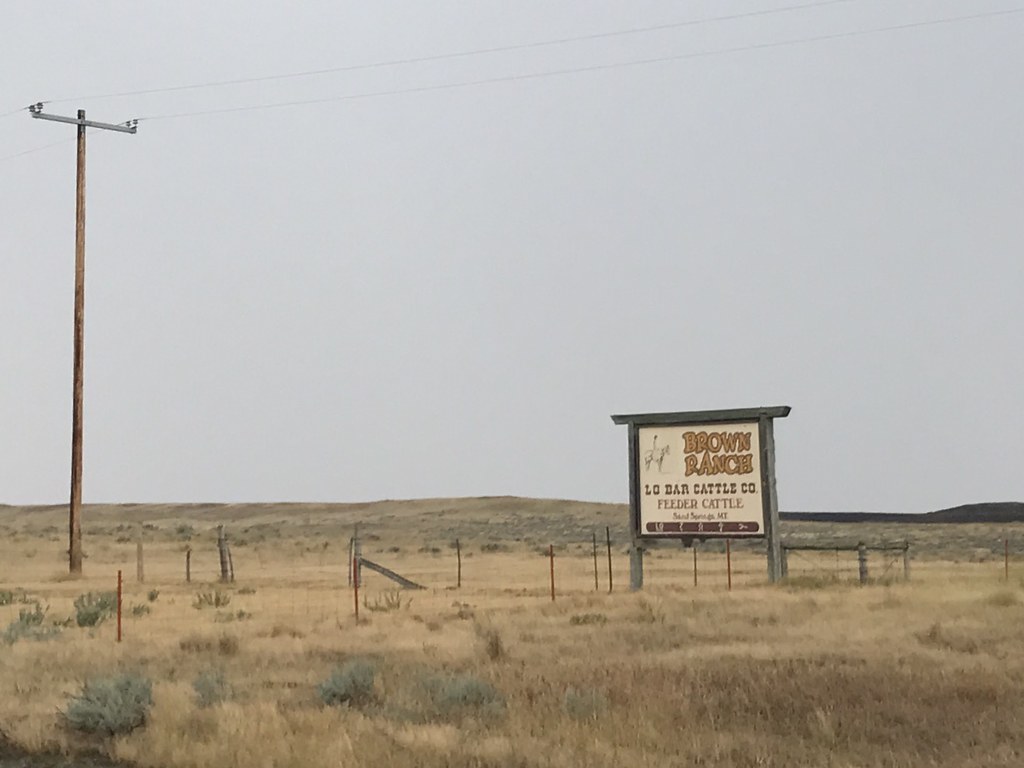 As I mentioned earlier, the fire burned nearly 300,000 acres of prairie. The charred countryside most visible from Highway 200 is part of the Taylor Brown Ranch just outside of Sand Springs. 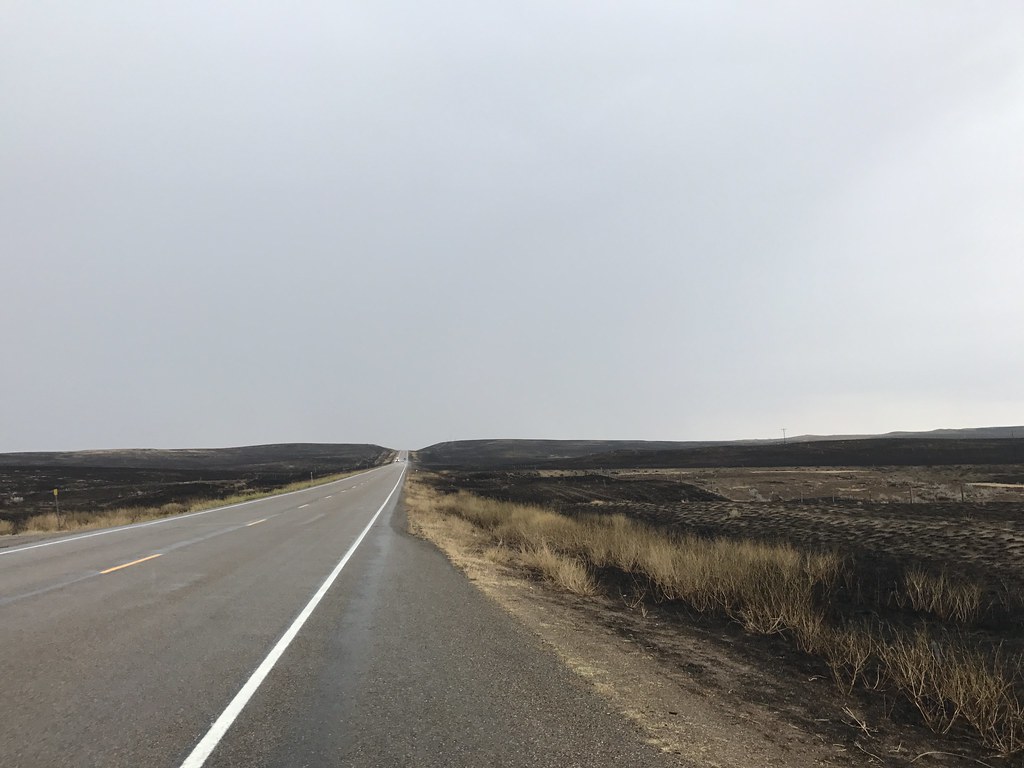 Headed west on Highway 200. It had just started to rain as we hit this spot. Instead of the typical sweet smell of wet grass and sagebrush, the pungent stench of fire burned my nose and took my breath away. I can’t even imagine what the people fighting fire had to deal with. 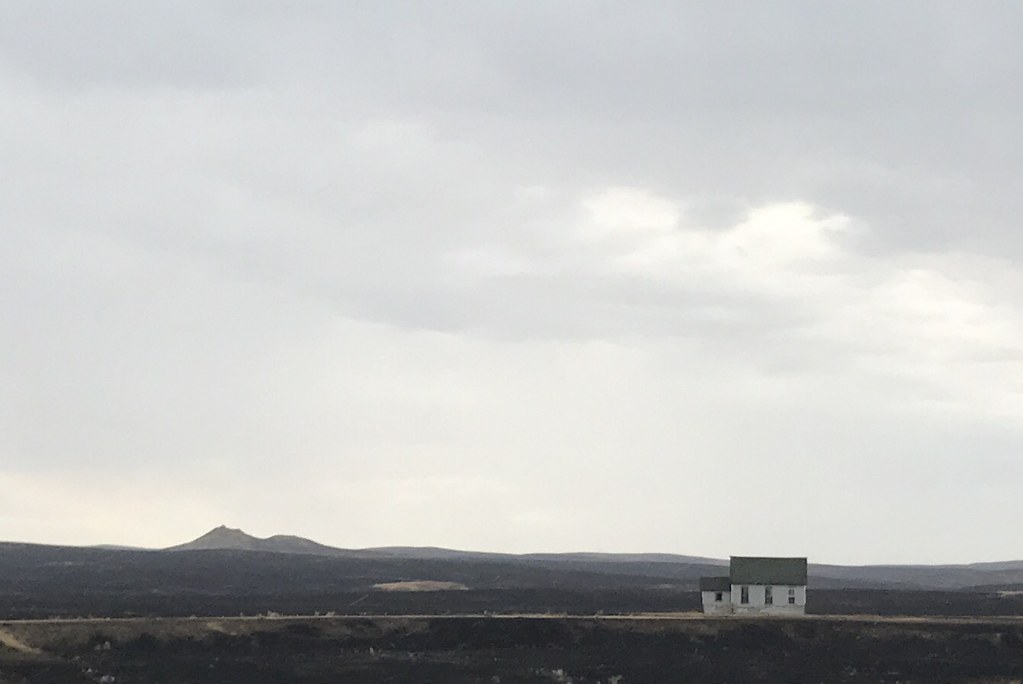 The iconic school house that I have seen over the years seems to be the only thing that survived this part of the burn. 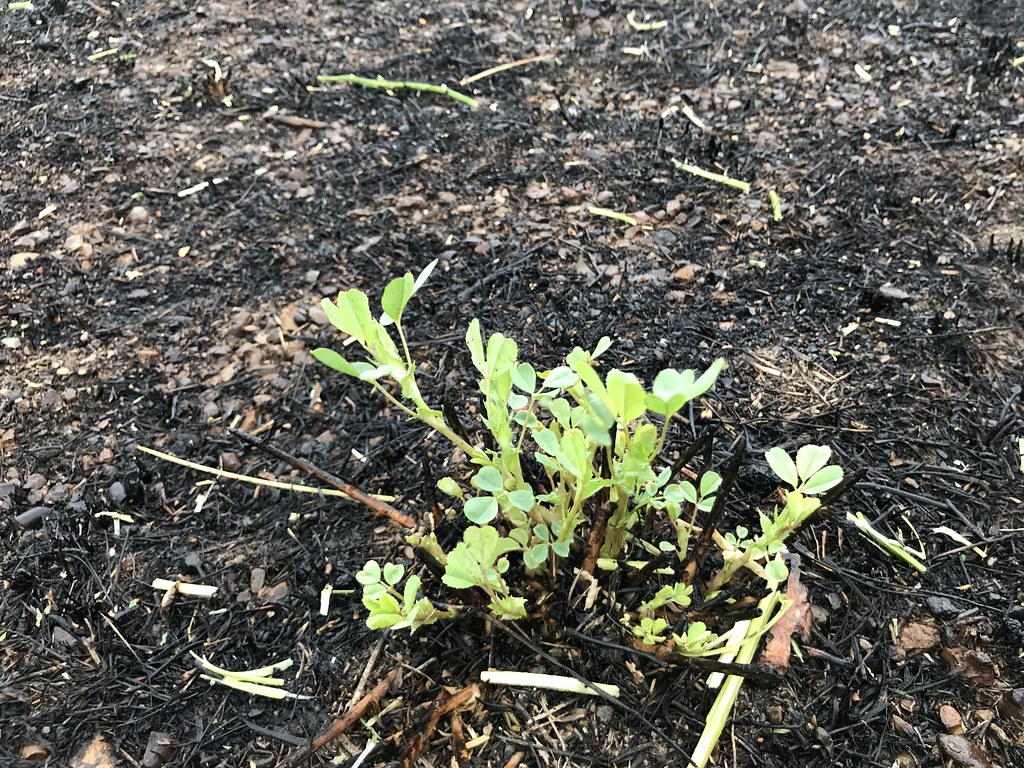 Although the fire had been just days ago and very little to no rain, this is evidence of the determination of new life springing from the ashes. The people of Garfield County will be okay; and they will be much stronger (if that’s at all possible), but it won’t come easy. 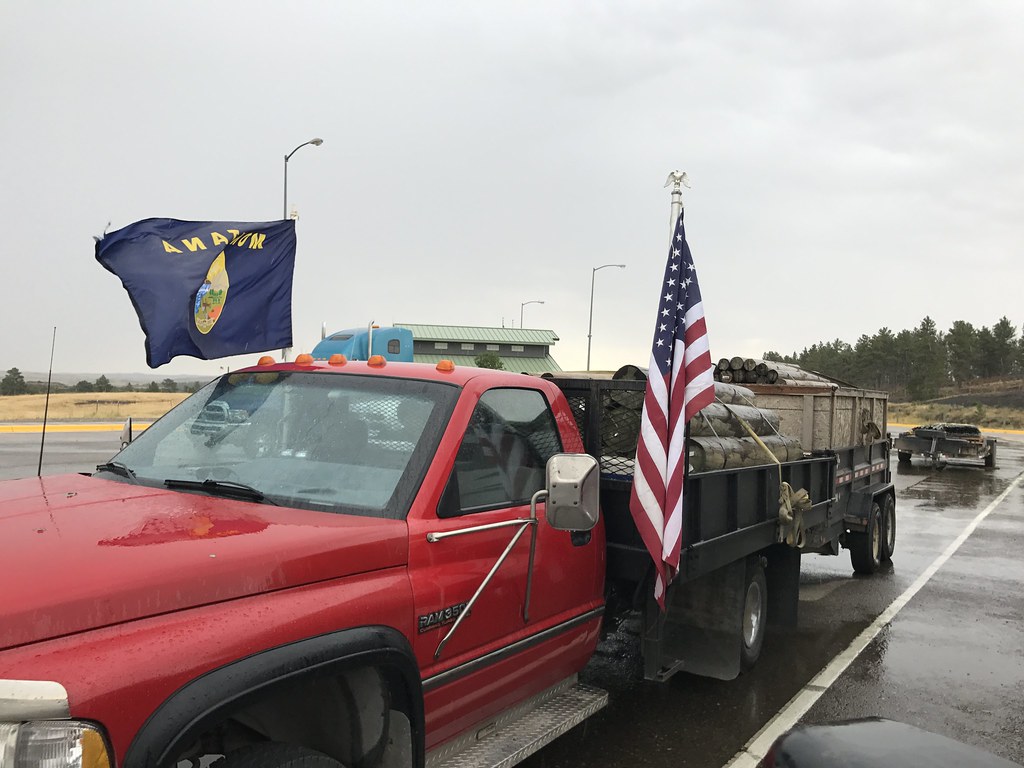 We stopped at the rest area just west of the Mussellshell River. These guys were on their way to Jordan with fencing supplies. God bless the givers of this world! 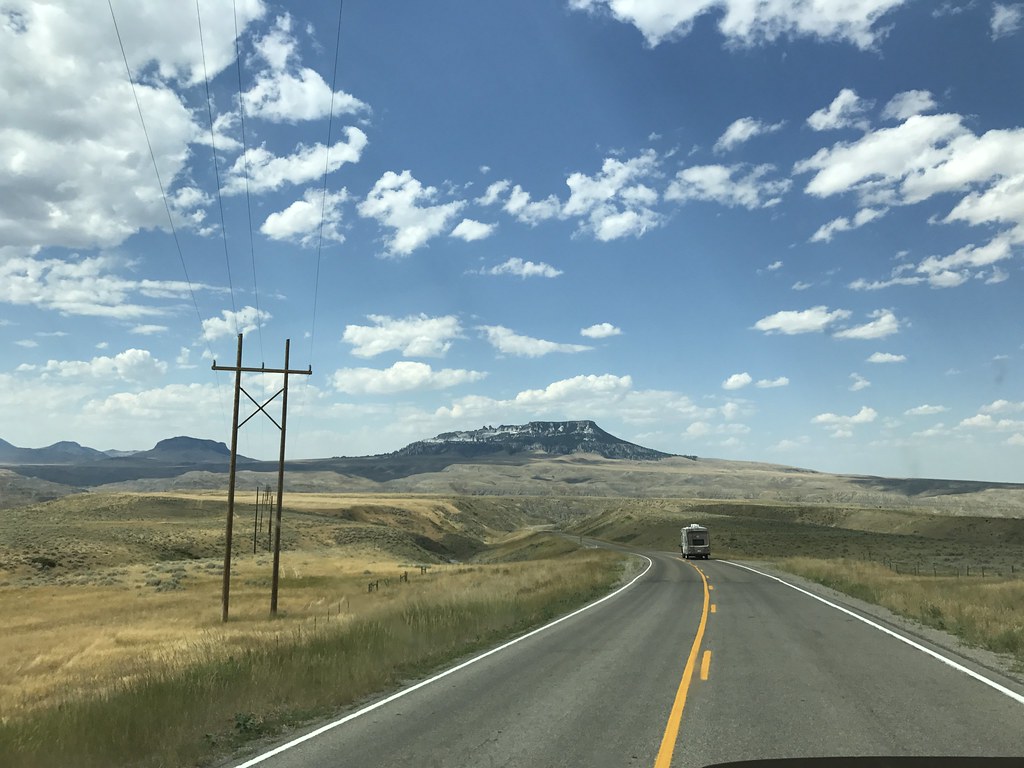 Another one of my favorite Montana landforms – Square Butte. 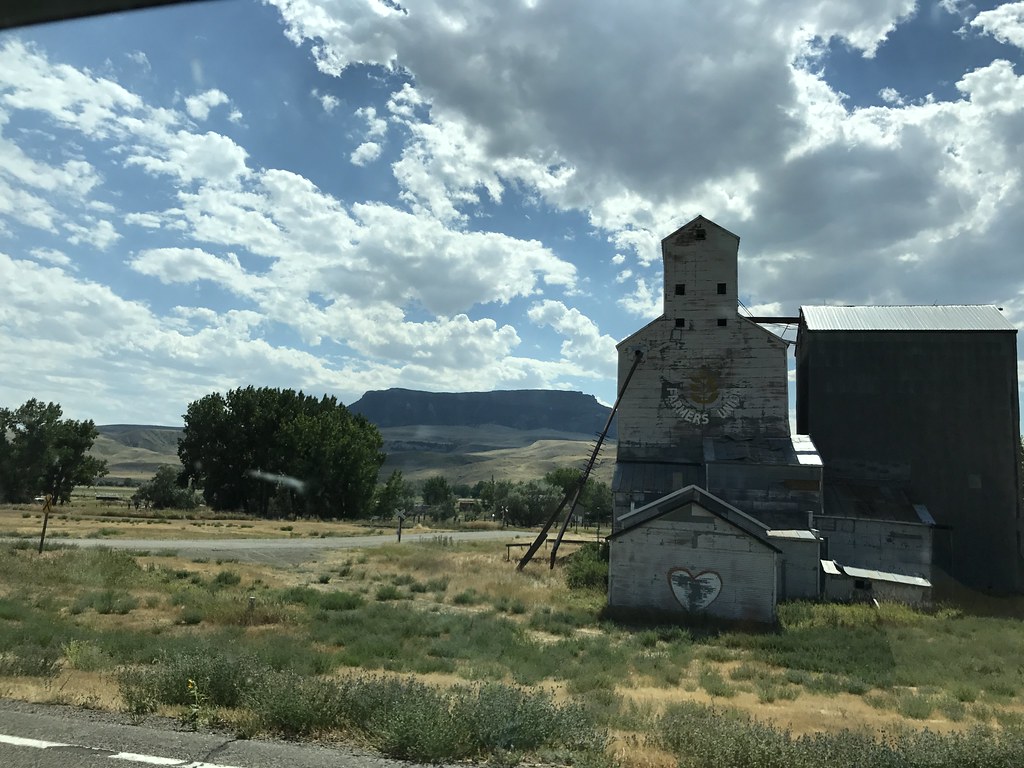 It was early evening when we finally pulled into our new location – a farm north of Chester, Montana. We set up camp and immediately felt right at home. 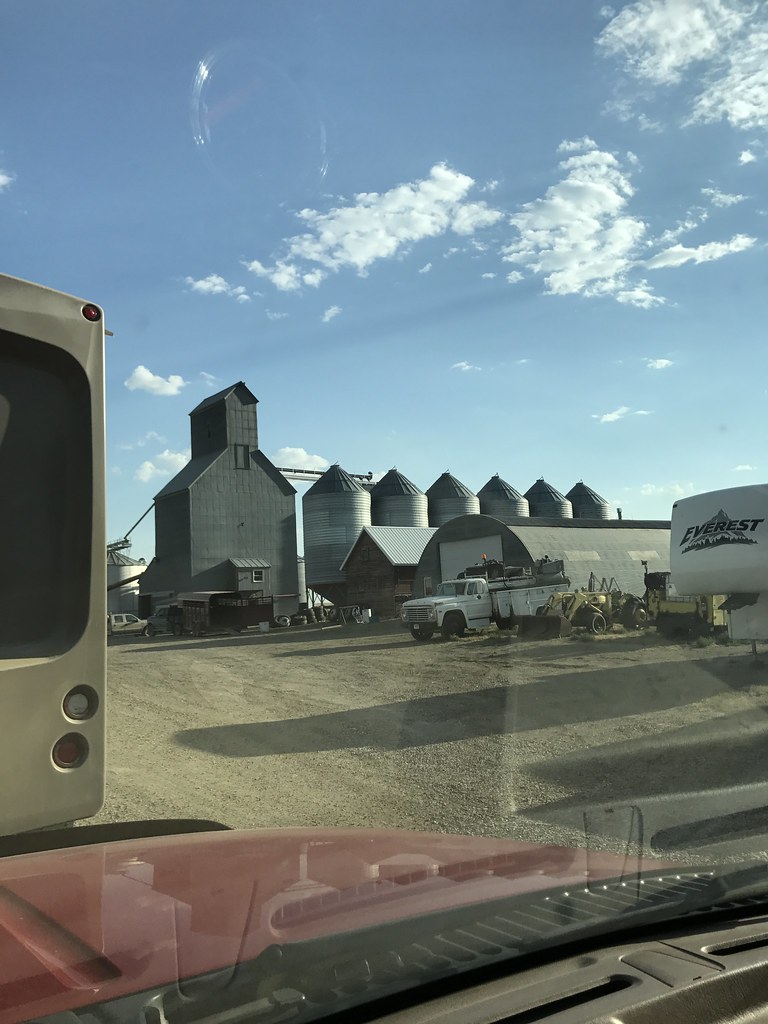 Our new adventure has begun! 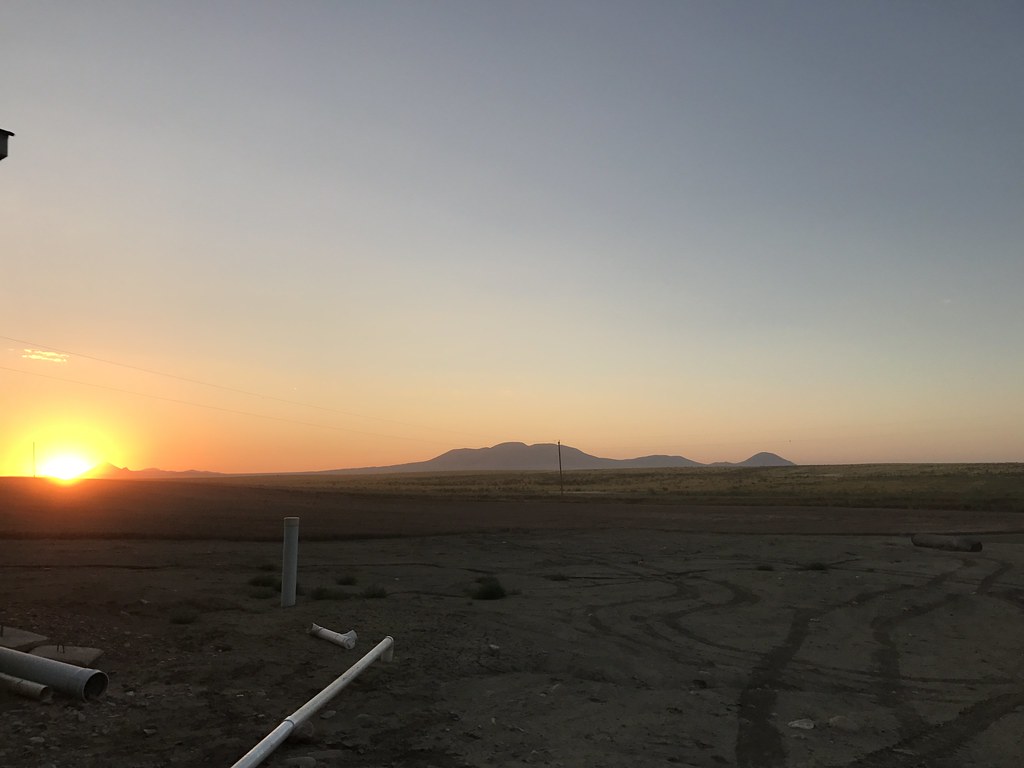 The sun setting on our first day – the Sweet Grass Hills on the horizon.