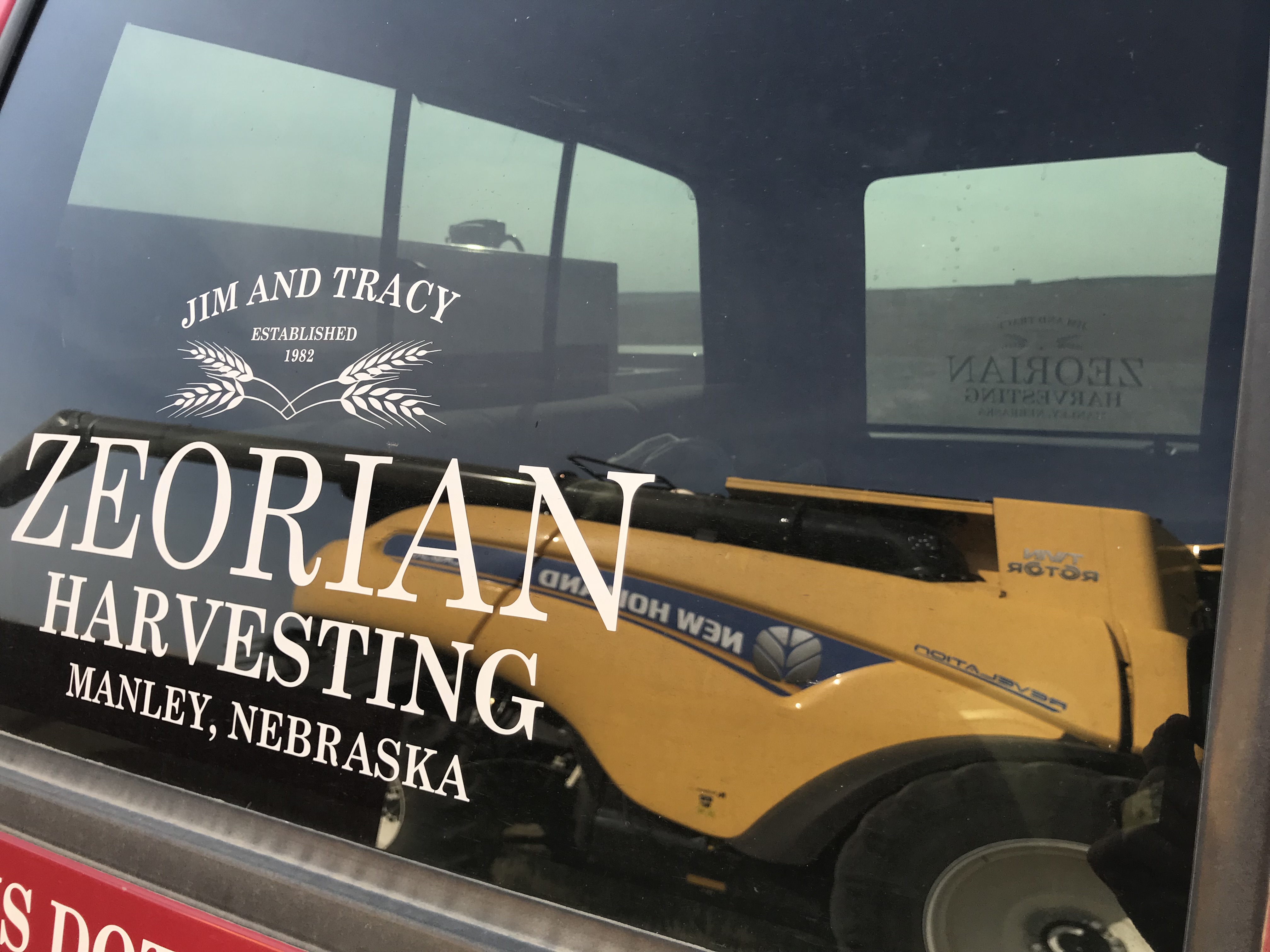 Jordan, Montana – The kids have been gone a week already. It seems much longer than that. It feels like a dream.

If you recall, we got started on winter wheat acres last Saturday afternoon. We finished them on Tuesday afternoon (7/31). I didn’t even have time to think about it being the LAST acres of winter wheat for 2018. We changed settings on The Beast to cut lentils and kept right on rolling. It wasn’t until we headed into town that evening that I realized the chase had ended. And then I felt a bit melancholy. Why? I honestly don’t know. Maybe it’s just that it won’t happen again for a whole year? Maybe it’s just me being weird? Does anyone else feel this way?

Lentils…an edible legume. I’ve never cut them before. They are known as a pulse crop and are grown more in Montana than they ever used to be. I cut chickpeas last summer but never lentils. Before the seed is planted in the spring, the ground is rolled with a large land roller pulled behind a tractor. This is used to roll large clumps of dirt and to push rocks in the ground. When this particular crop is harvested, the header floats directly on top of the ground and follows the contours of the field. As Jim said, “These MacDon headers are a freaking miracle!” When I lower the head, it drops completely and skids on the ground. So, knowing a field has been rolled, saves on some worry of picking up a rock. BUT…you still have to watch and this puts me even further on the edge of my seat! 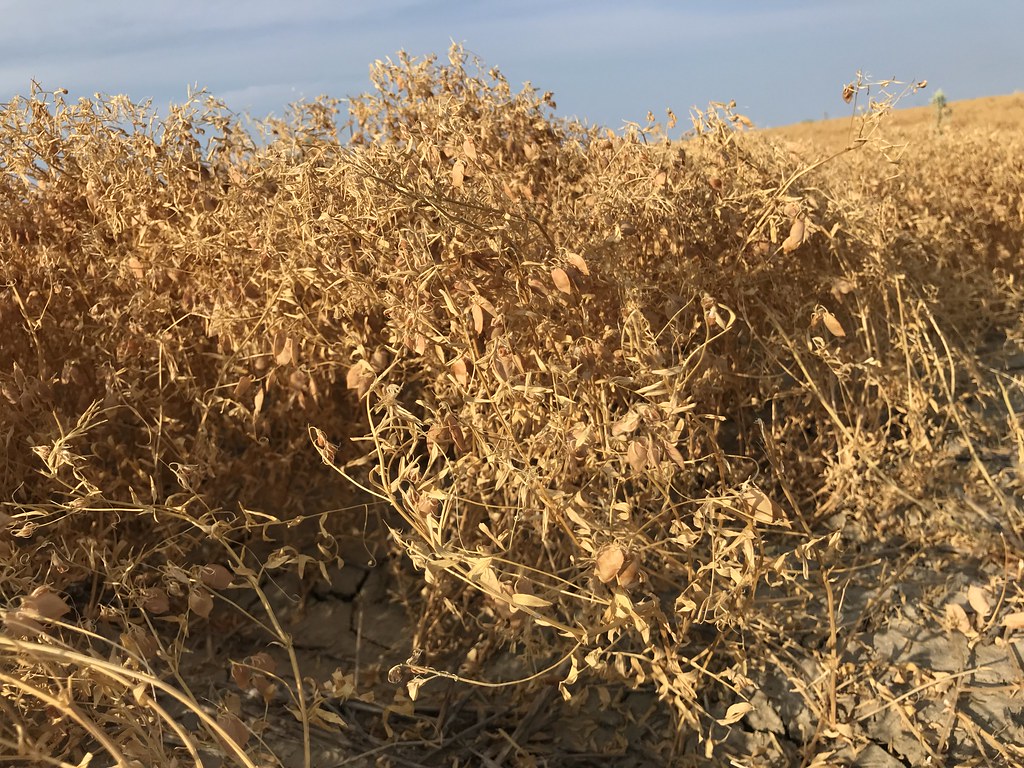 Lentil plant ready to be harvested. 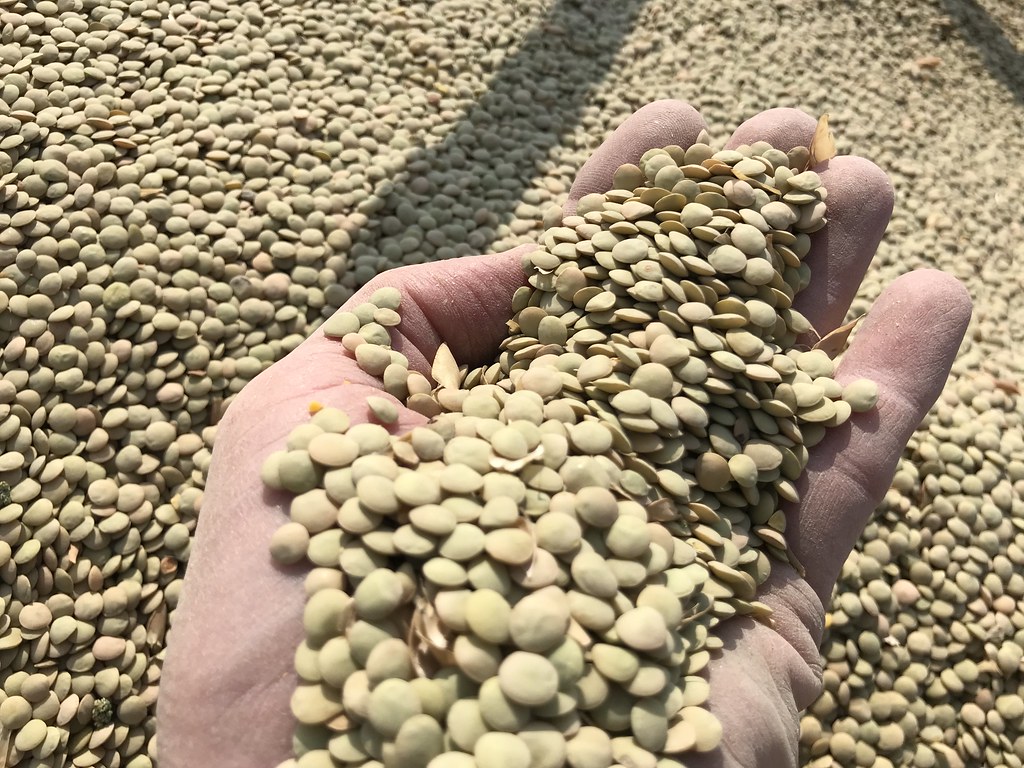 This is what lentils look like after they’ve been harvested by the combine. I thought they had a little bit of a peppery taste to them. 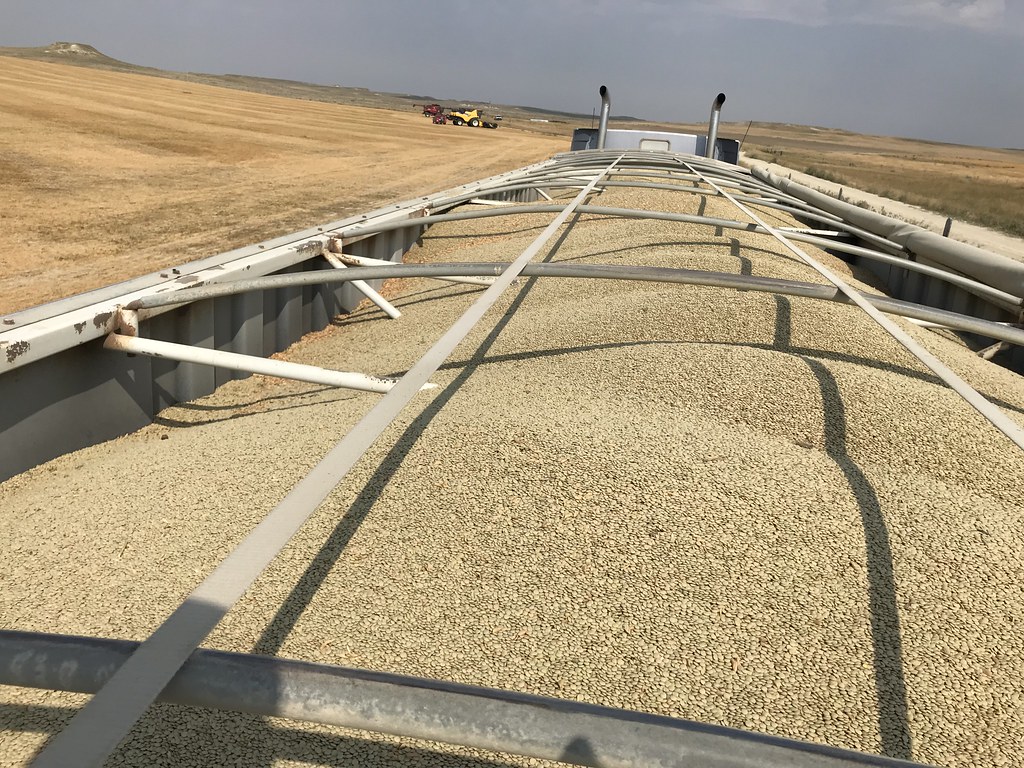 See the darker pods along the sides of the truck? That’s what we had way too much of in the tank prior to closing the holes with the tape. 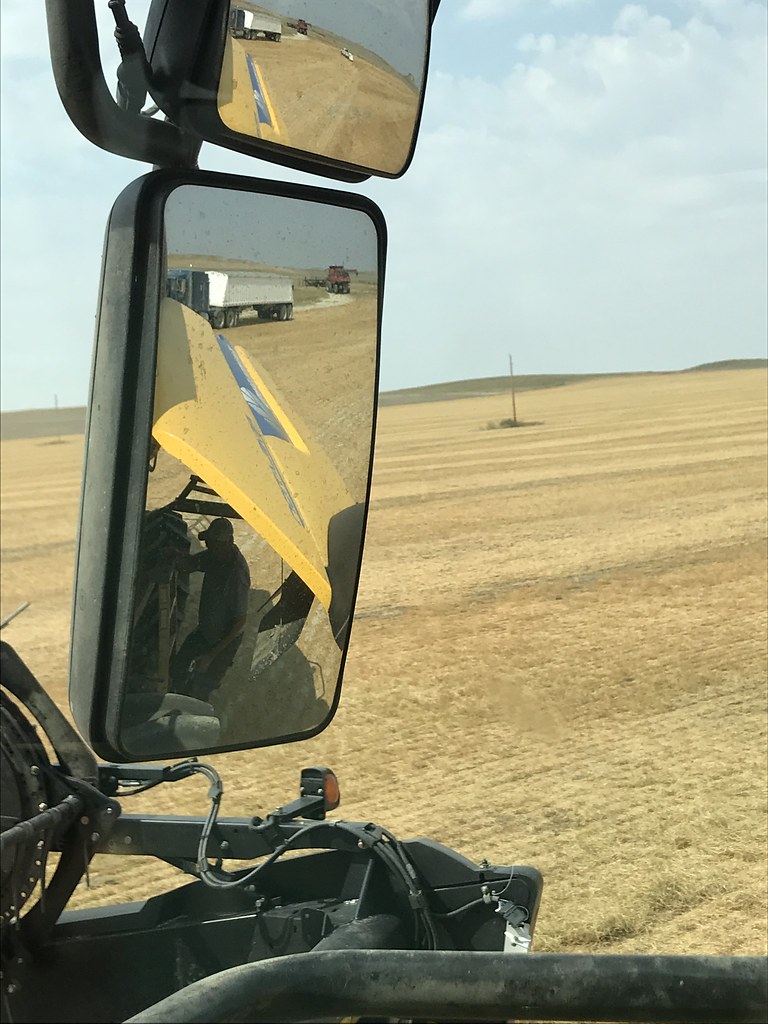 There’s an awful lot of harvesting activity going on in this photo! 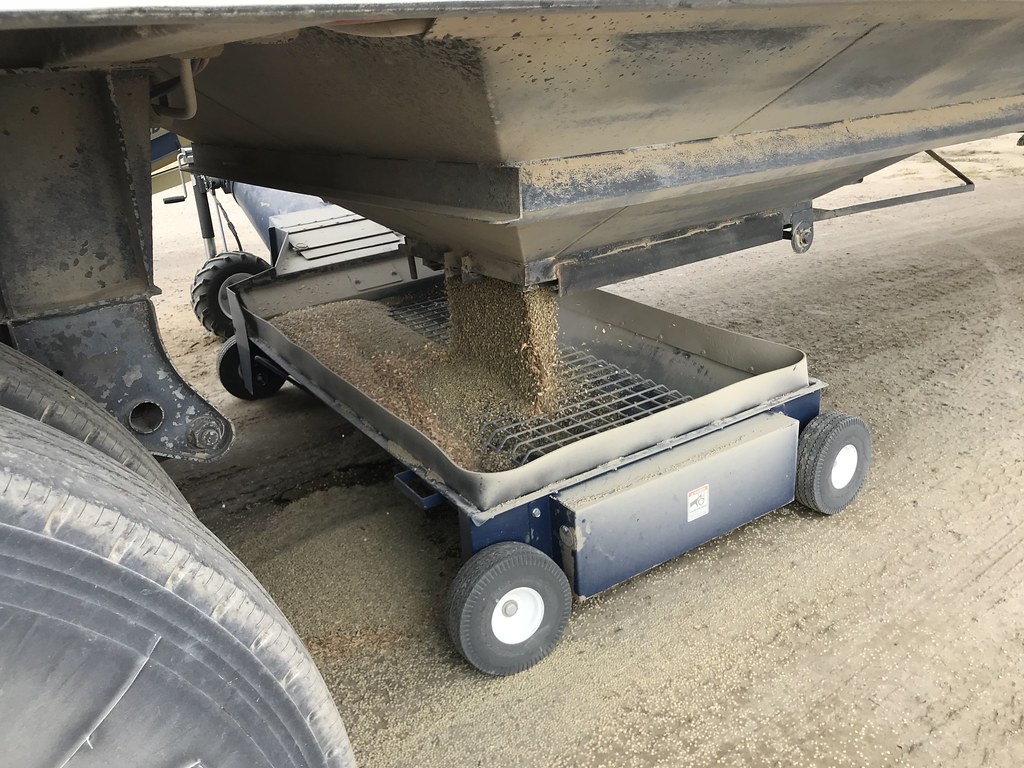 All of the grain we harvested for this farmer went right into the grain bin. Here you see lentils coming from the truck and dumping into the swing auger. 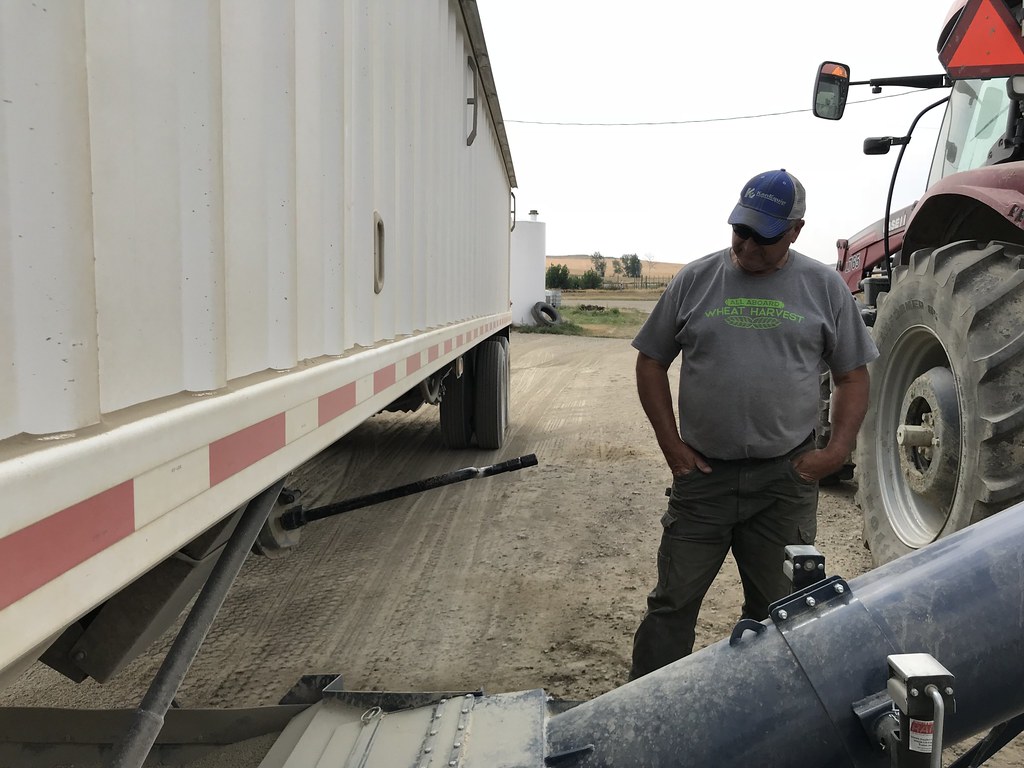 Jim’s watching the grain as it comes out of the truck to make sure there’s no issues. If the trap door on the truck is open too far, too much grain comes out and causes a big mess. A steady stream allowing the auger to do it’s job is perfect. 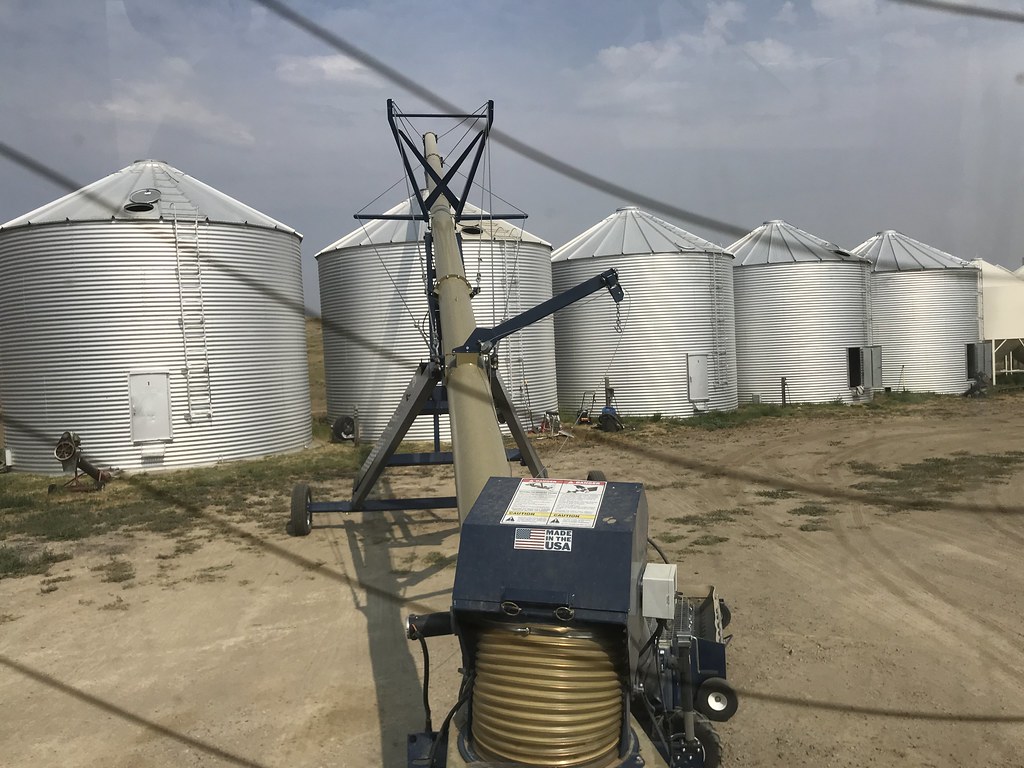 The grain makes its way from the truck to the swing auger and then to the larger auger leading to the grain bin. The on-farm storage gives the farmer another option of when his grain is delivered to the elevator.

When we first started this new crop, we had an issue with too many pods ending up in the grain bin rather than out the back of the machine. After a couple of phone calls to people who run New Holland combines and to our harvest support, we knew what we had to do. I crawled into the belly of The Beast and started closing up the spaces on the pre-sieve with Gorilla Tape. It worked! 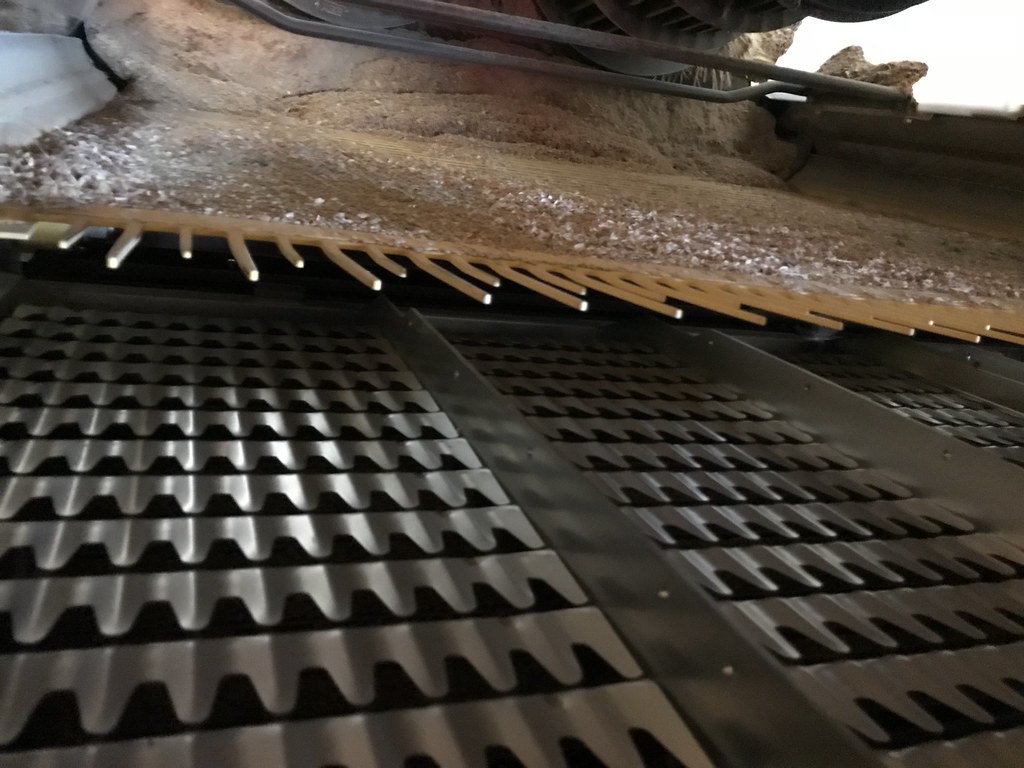 Pre-sieve before the tape was added. 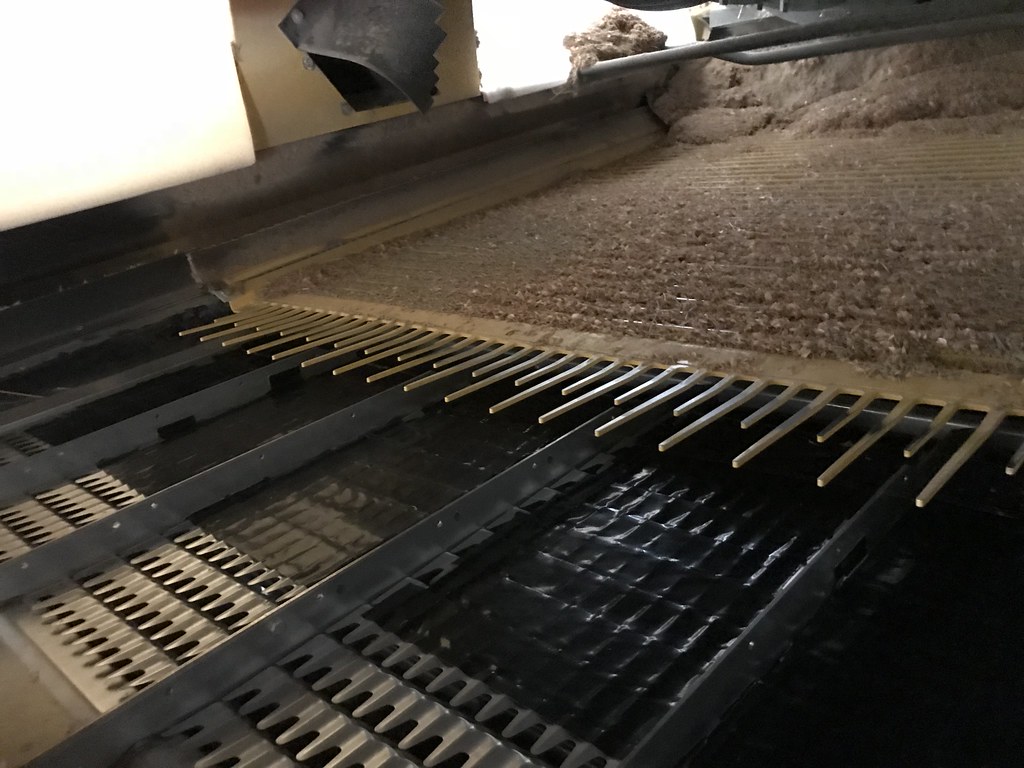 Pre-sieve after I taped the holes shut.

We finished the lentils on Friday afternoon (8/3) and made a quick trip to check out the spring wheat. We found it a bit too much green for our liking. So, we decided we would give it a couple of days and do a sample on Monday (8/6). 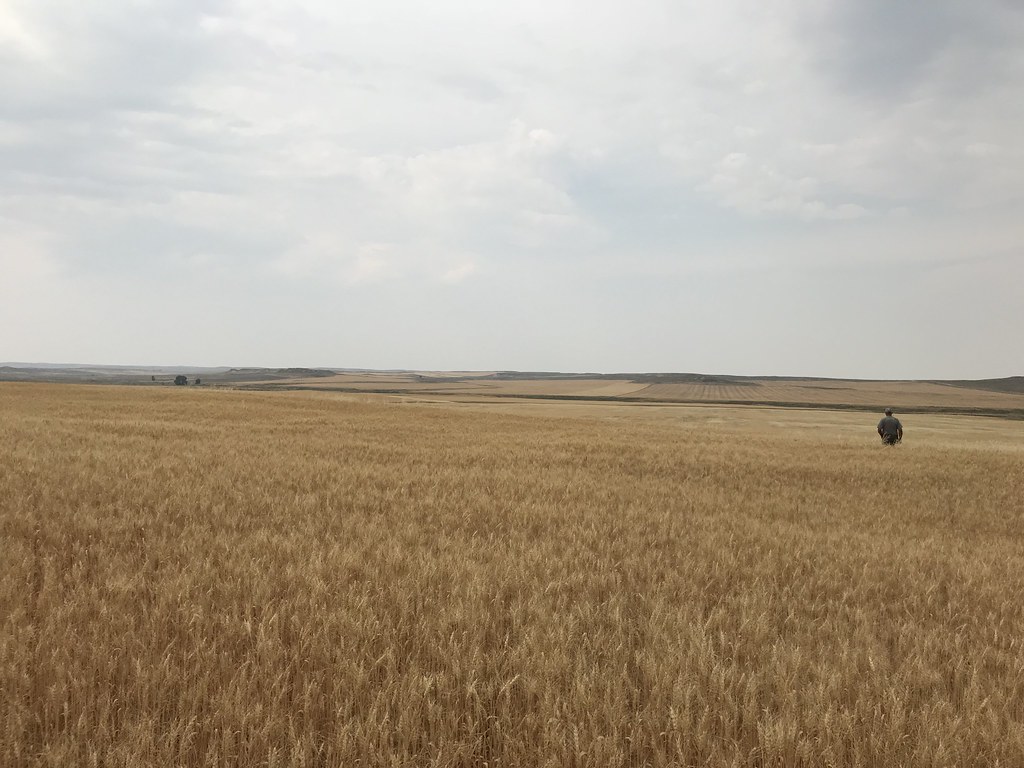 Doing a quick check of the spring wheat after we finished with the lentils. 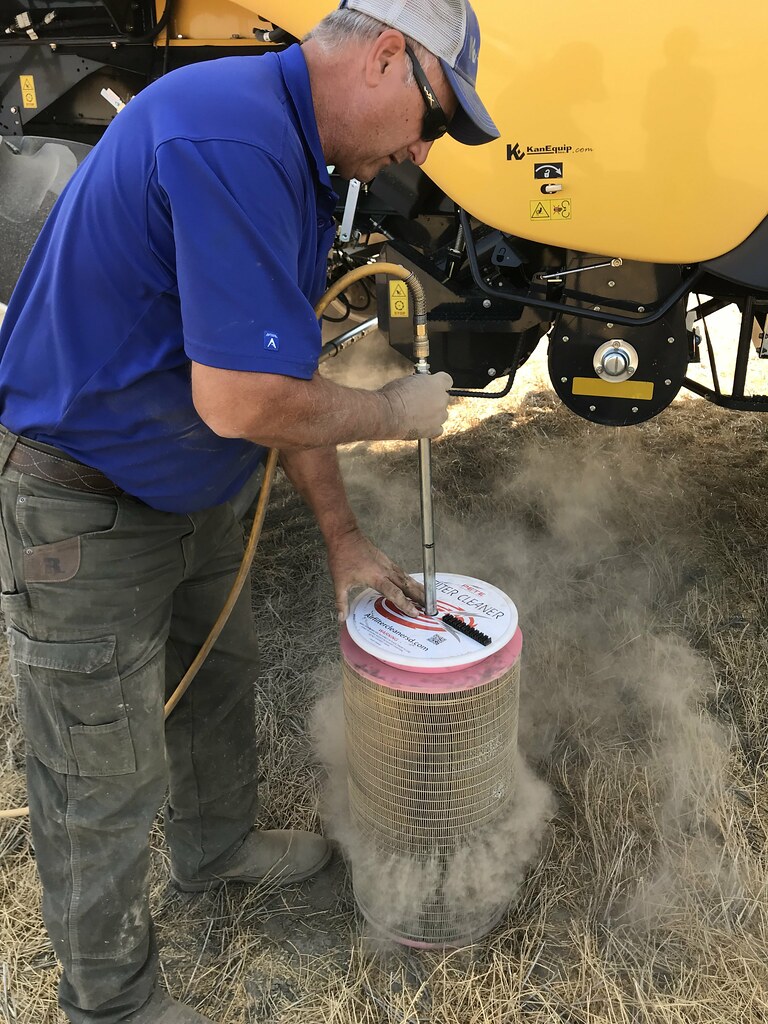 Cutting on the ground stirs up a whole lotta dirt and dust. This handy-dandy air filter cleaner is just satisfying to watch. It certainly does an efficient job of getting rid of the dust!

In the meantime, we had a visitor arrive Friday evening. Unfortunately, Michael was here to be a part of the harvest – which wasn’t going to happen while he was here. Michael is a freelance writer from Santa Fe, NM and is gathering information for articles about what it’s like to be a custom harvester, living on the road for months at a time and how we run our business. He had been hanging out with another harvester for several days prior to arriving in Jordan. Thank goodness! He was able to be a part of the wheat harvest in South Dakota before making his way north to just hang around the camper with us for a couple of days. I guess he got a taste of what we do when we have a day or two off. It’s called “catch-up”. Catch-up on laundry, cleaning, mail, emails, maintenance and rest. And…something other than sandwiches to eat. 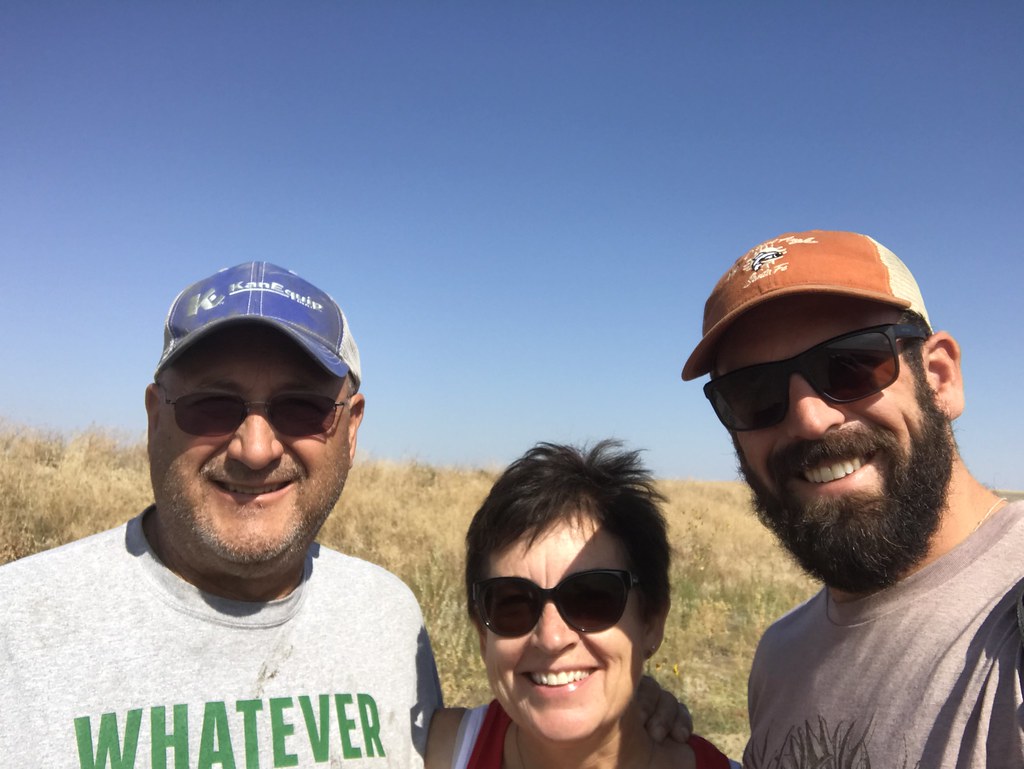 Me and Jim with our visitor, Michael, before he hit the road this morning.

If he had only had one more day scheduled to be with the Z Crew, he would have been able to be a part of the spring wheat harvest. We got started again this afternoon (8/6). The field I’m working on seems a bit overwhelming for one machine. I believe it has over 300 acres in it. By the time it’s cut, it will feel like quite an accomplished feat! Montana boasts large fields, big sky and wide open spaces. It’s beautiful here! 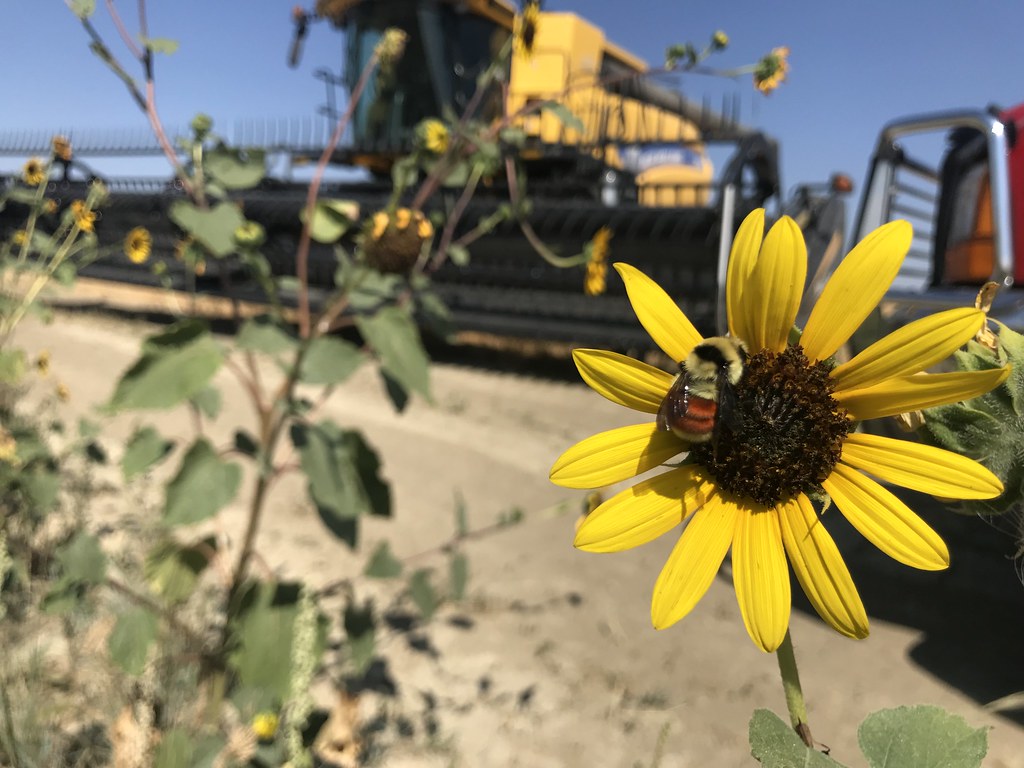 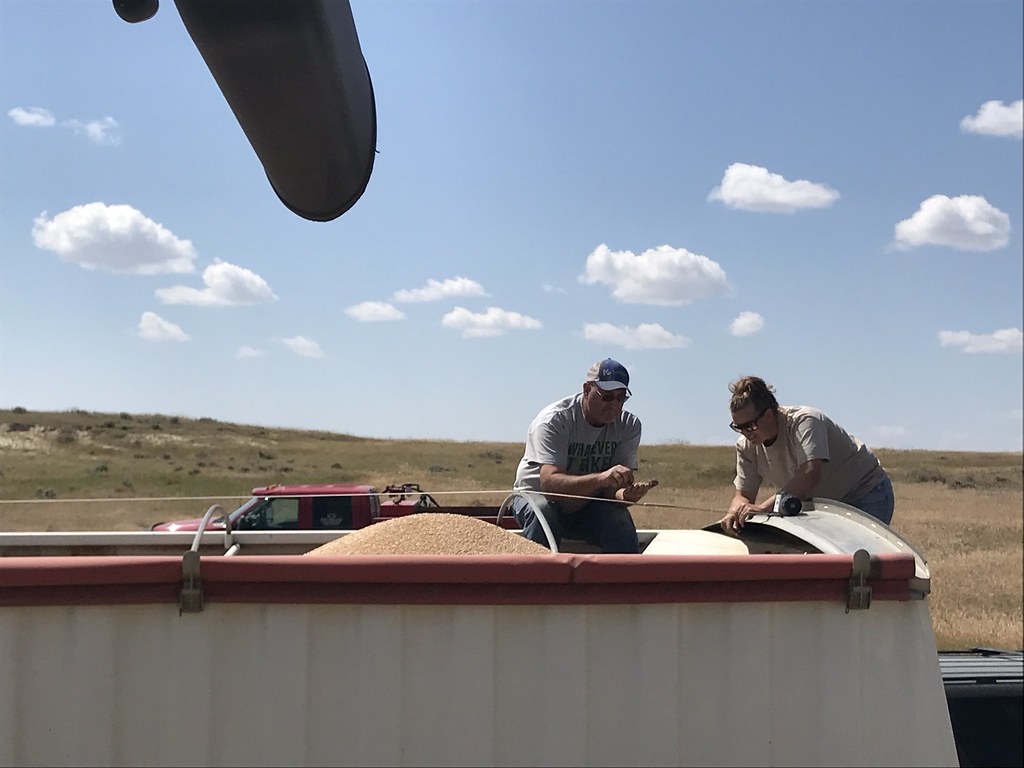 Checking out the spring wheat and trying to decide if it was dry enough to keep cutting. It was. 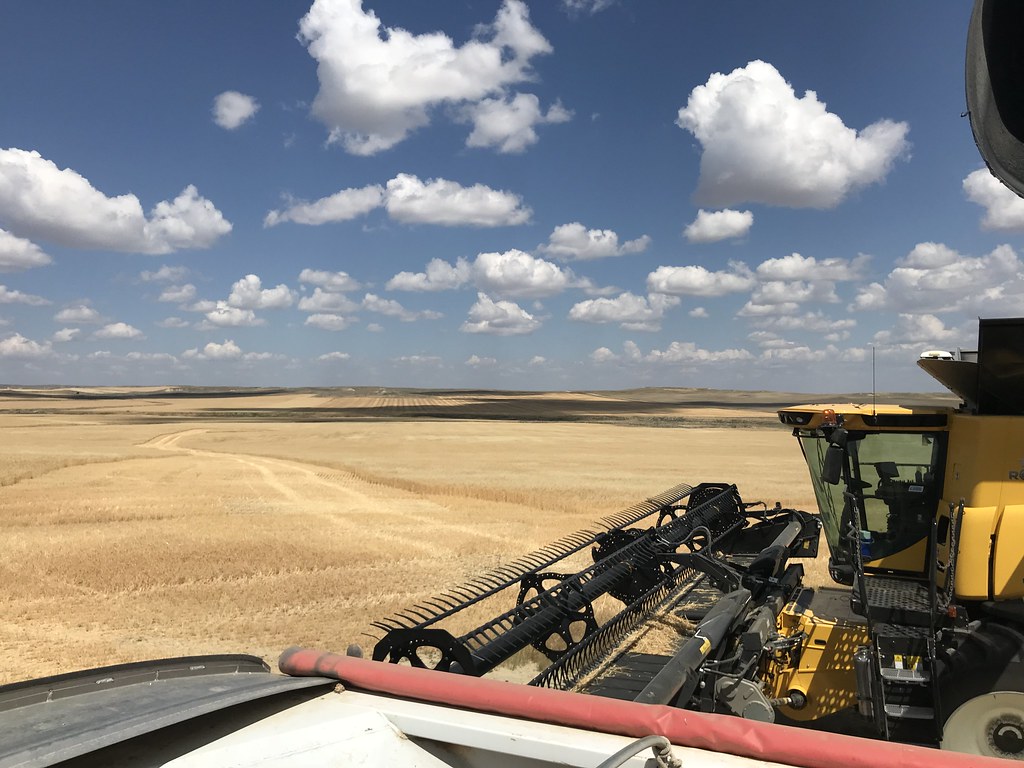 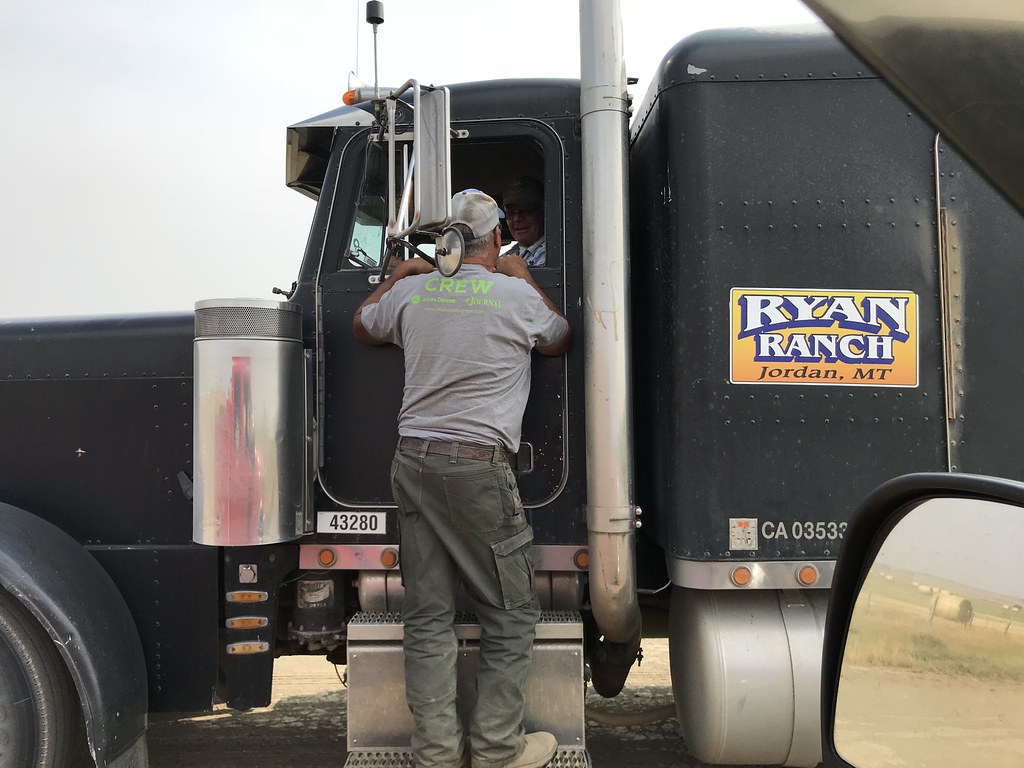 Jim said the other day, “There’s two things happening in Garfield County right now that I never thought I’d see. 1.  A header skidding on the ground (due to rocks) and 2. Tom Ryan driving a semi.”

The heat of the summer continues. The weatherman said 100+ degree weather for the next several days. I have a feeling I’m going to be wishing for a rain day before this is all said and done!