All Aboard Harvest | Tracy: Faith and Perseverance
17739
post-template-default,single,single-post,postid-17739,single-format-standard,qode-quick-links-1.0,ajax_fade,page_not_loaded,,qode-theme-ver-11.2,qode-theme-bridge,wpb-js-composer js-comp-ver-5.4.7,vc_responsive

Manley, Nebraska – This should be the last time I use this location at the beginning of my posts. Trip number one has been made to Chase, Kansas. Harvest 2019 is about to begin for the Z Crew … finally!

The state of agriculture is depressing right now. Farming is a stressful and risky business. Weather and commodity prices are two of the main causes of the current decline in farm income and both are out of the farmer’s control.  I just recently read a heartbreaking story about another young farmer from South Dakota who struggled with depression and, in the end, took his life. He left behind a beautiful, young family who will now have to figure out how to go on without him … how to find their new normal. 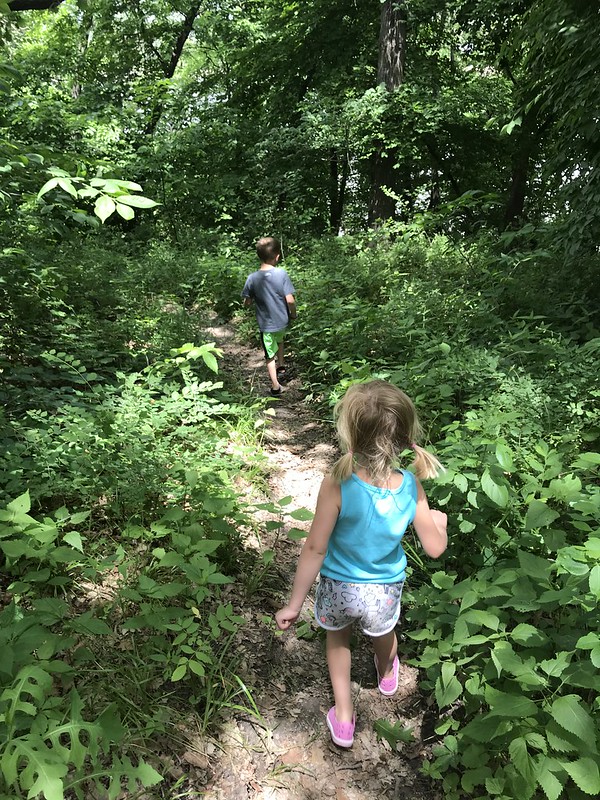 Before we took off with the first load, we had a couple of beautiful days with bearable temps and little-to-no humidity. I decided it was the perfect opportunity to take Eli and Nora on a hike and picnic. 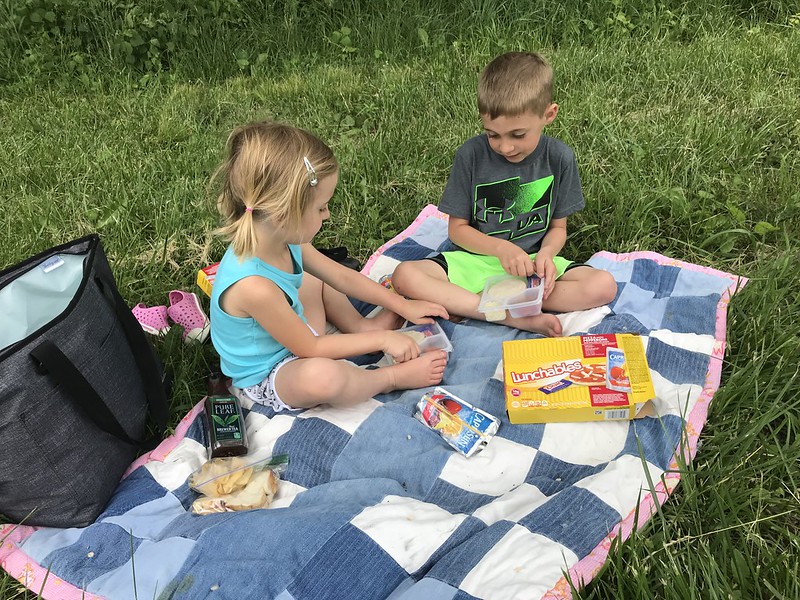 I let the kids pick out “the” spot. There was a little bickering before they worked it out and this was where we landed.

I believe it’s safe to say those of us who depend on the farmer are also struggling. Questions consume our thoughts about whether the struggle and stress is really worth it. At least that’s how it’s been in our household this spring. I usually try to remain positive and think of reasons why it won’t affect us and how we will be able to continue hanging on. However, the negativity has begun to even creep into my thoughts so much that I’ve been dragging my feet about the 2019 harvest. To make matters worse, we found out early last week the acres we were planning to cut in Colorado have been taken out of the picture. The farmer received hail and will no longer be needing our services this year. They can handle what’s left with their own combine. 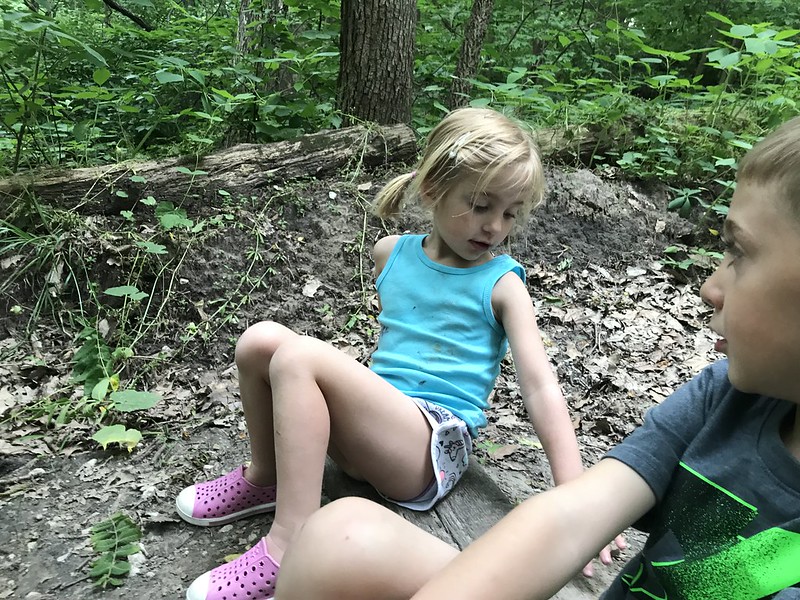 After our picnic lunch, we decided to take a longer hike. “Gwamma, can we just take a little bweak?” 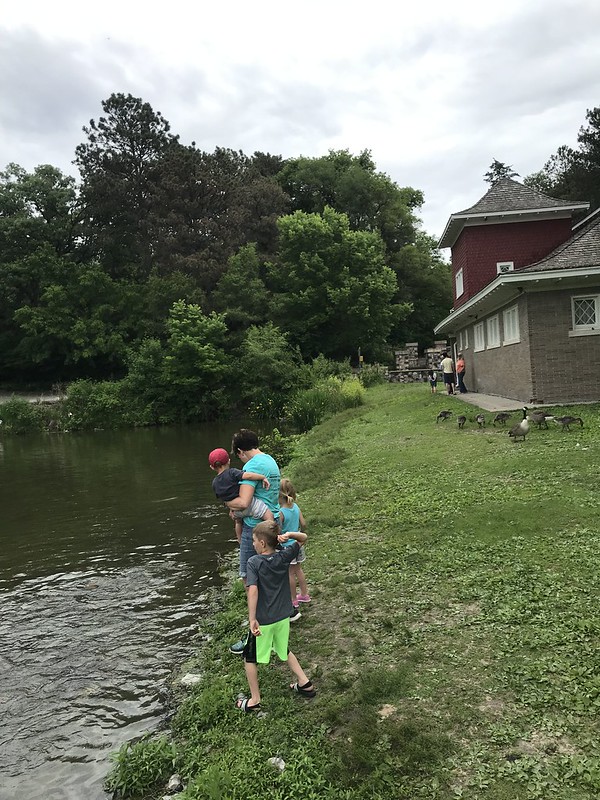 After Ben woke up from his nap, he and Jamie caught up with us and we fed the geese and huge fish.

The afternoon Jim told me about Colorado, I turned to my fellow HarvestHER chat group and spilled my guts. Their words of encouragement helped me get through the day. What would I do without my tribe? We all need community and someone who truly understands what we’re going through and dealing with. And they do. They get it because they, too, are feeling the same feelings, going through the same motions and taking one day at a time—just like me. The struggle is all too real.

While still laying in bed the next morning, I remembered something I had read in a recent devotion. That something was remembering to give God thanks even in the worst of times. Seems weird, doesn’t it? By giving Him thanks for the trials from the get-go, we are letting Him know we have faith in His working a bad situation into a good one. Right then and there, I thanked Him for losing those wheat acres because I know He’s going to work this all together for His glory. My job will be to stand back and watch how all the pieces come together. My soul definitely felt more at peace at that moment than the previous afternoon. 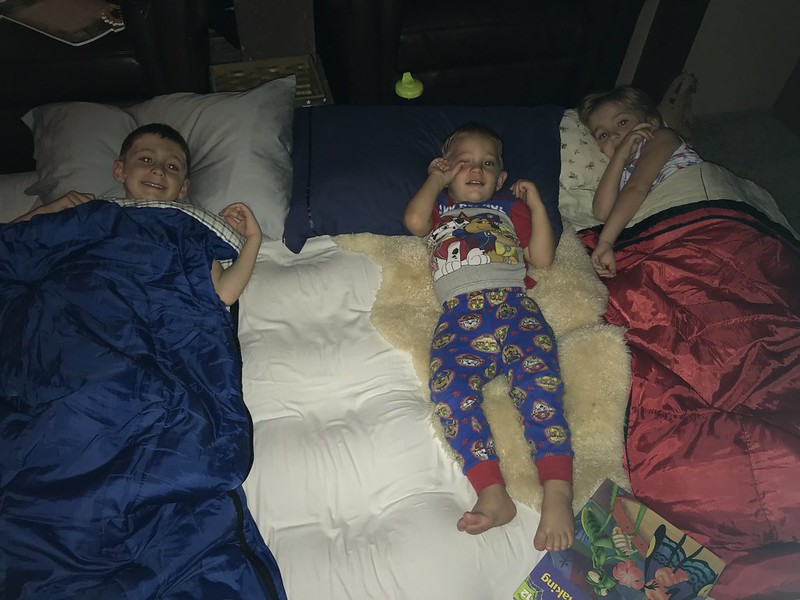 After the hike, picnic and feeding the geese, the four of us had a slumber party in the trailer house. We stayed up much later than mom and dad would have liked but we had a great evening together! 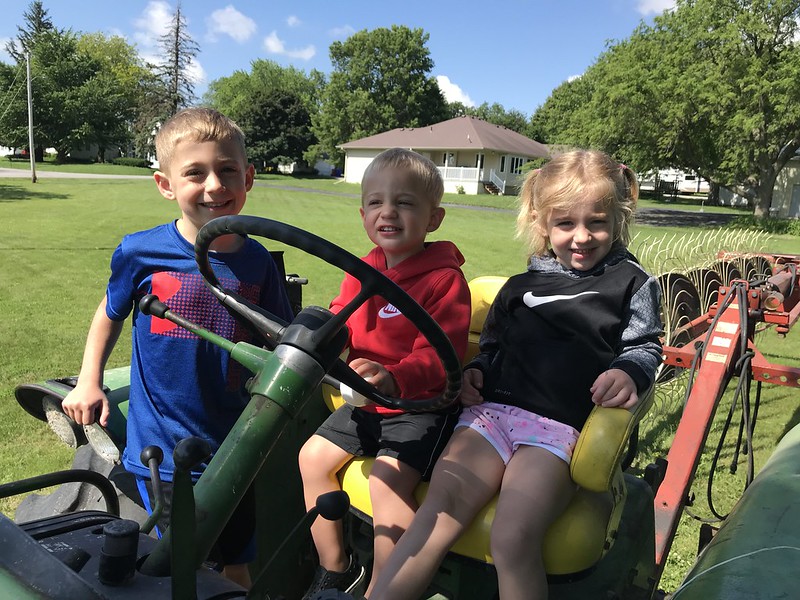 The next morning, Ben spotted the tractor in the neighbor’s farmyard and made a mad dash!

June 14 was the day we would begin making the first load south. The night before, the car was loaded on the job trailer, Frank was washed and our overnight bag was packed. We were finally going to get this party started! 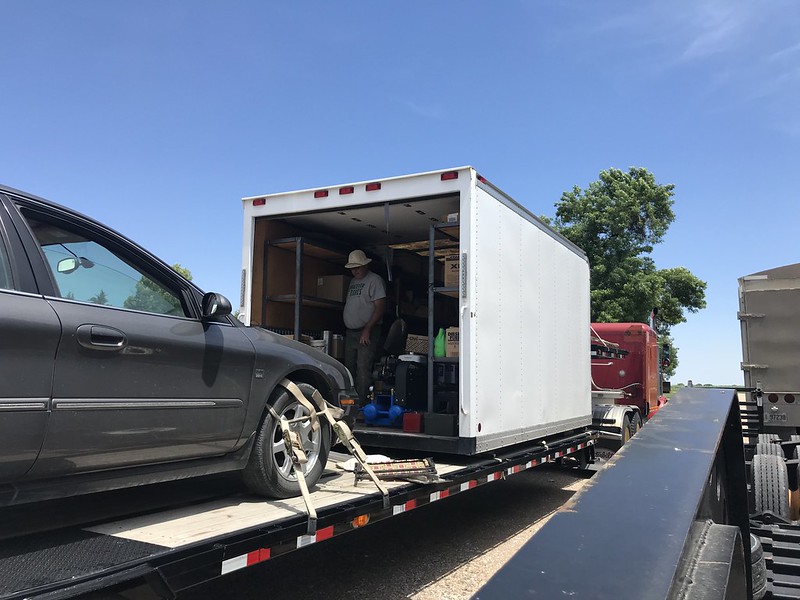 Car loaded and miscellaneous items put in the “job” trailer. This unit was ready to hit the road the next morning. 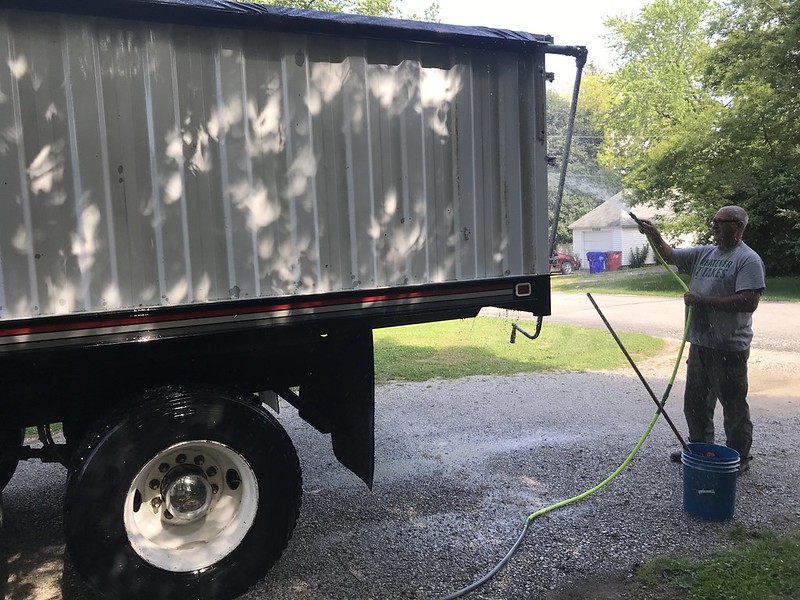 Frank got a much-needed washing before we left home.

It wasn’t until we crossed the Nebraska/Kansas border that I began seeing more and more wheat fields. The further south we drove on Highway 14, the more fields of gold I saw. They were soon on both sides of the highway. My windows were down and I could smell the wheat straw. That familiar scent brought back years of memories and began to, once again, revive my soul. I could feel the negativity being replaced with excitement and anticipation of the harvest. 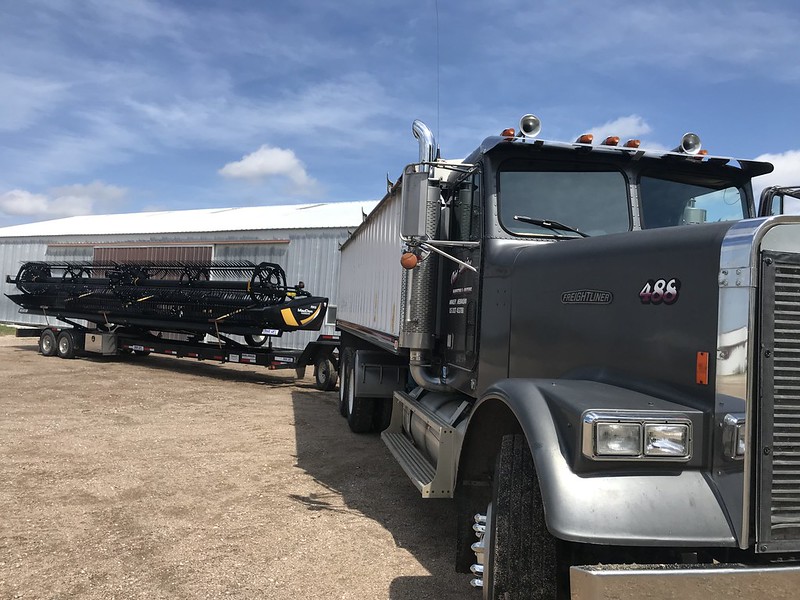 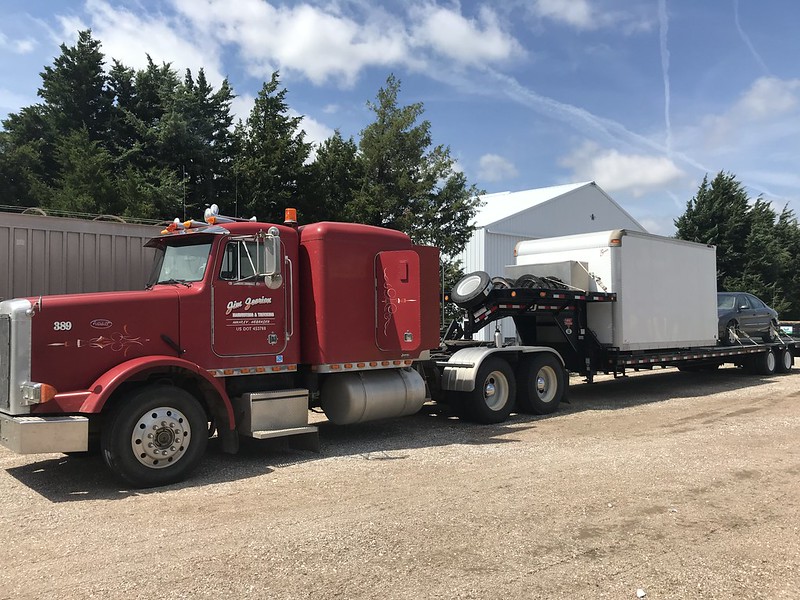 After we checked lights and started our log books, the much-anticipated trip to Kansas began.

We arrived at the farmer’s yard near Chase, Kansas, early evening. I jumped out of Frank and made my way to the wheat field just yards from where the trucks were parked. I stood there and watched the wheat dance in the wind and I listened to the sounds that were filling my ears. The sounds of rustling wheat, birds singing their evening songs and the pump pump pump of the oil well. I was ready to do this thing. It’s going to be difficult to tell the kids and grandkids goodbye but I was finally starting to feel like I was where I needed to be. 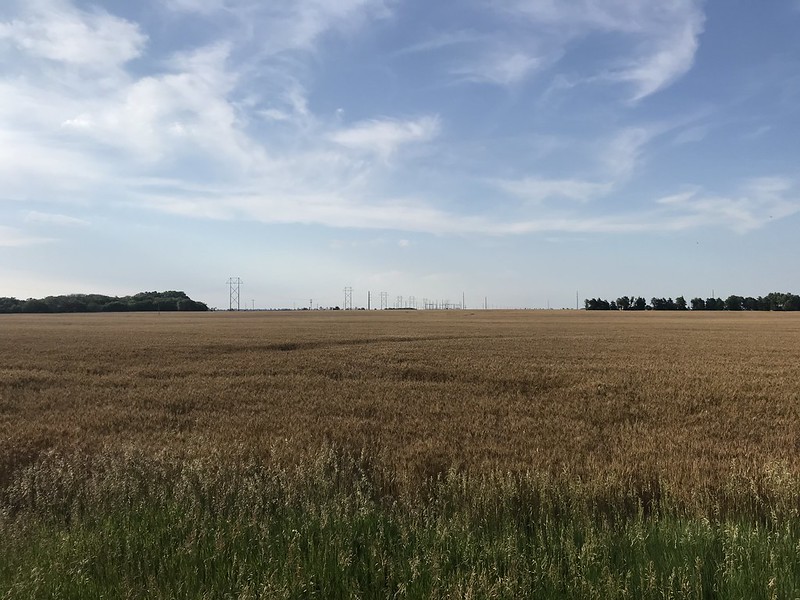 The soul-reviving smell and sounds of a wheat field!

As I helped Jim get the car off the trailer, he told me he’d like to take the time and make a quick trip to Garden City to see what things looked like there. We gathered our overnight bag, locked up the trucks and hit the road again … all the while watching the dark clouds brewing to the west.

We ran into some pretty nasty weather just west of Great Bend. Very strong winds, heavy rain and hail made for an interesting trip. We watched the radar on our phones to see if it was going to hit the farm we had just left. We were lucky this time, the worst of the storm missed.

The wheat in the Garden City area was much greener than around Chase. This seems weird to me because Chase is northeast of Garden City. I asked the Garden City farmer’s right-hand man why that would be. I thought maybe it would have something to do with elevation and he confirmed that was right. There is 1,200 feet difference between the two locations. He also told us the wheat we saw leaning and laying down that morning was a result of the storm we drove through the night before. Prior to the storm, it was all standing. The question now is, “Will it stand back up before harvest?” Would you care to make a bet? 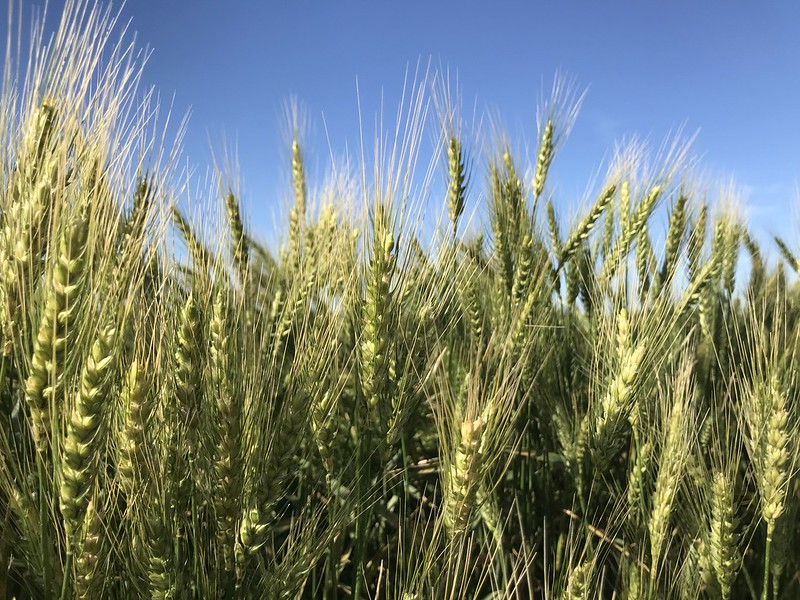 The wheat in Garden City is still showing plenty of green in it. 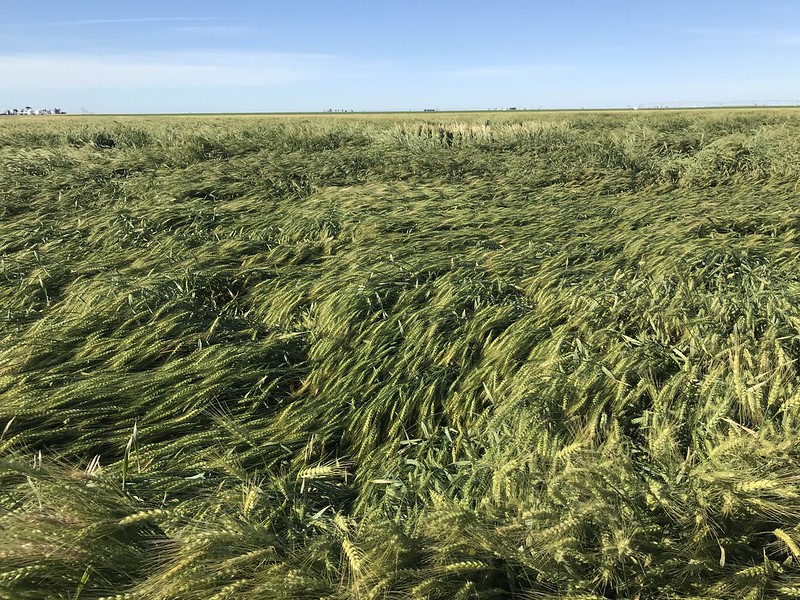 This was the wheat in the corner of a pivot. If you look on the horizon of the picture, you can see the wheat under the pivot is still standing. I asked why that was. The answer – the pivot was planted later than the corners. The corners were planted any time between September and October 10. The pivot was planted after the corn was harvested which didn’t happen until November due to the wet fall. The growing season for the wheat was so wet this year, irrigation pivots weren’t even turned on.

Trip number two is scheduled to take place on June 20. There is still a lot of work needed to be done between now and then! However, other than dreading the goodbyes, I’m now more anxious to see what harvest 2019 has in store for us and how God is going to work the crummy things into something good. We must remain faithful and continue to persevere!