All Aboard Harvest | Tracy: Writing the final chapter
18237
post-template-default,single,single-post,postid-18237,single-format-standard,qode-quick-links-1.0,ajax_fade,page_not_loaded,,qode-title-hidden,qode-theme-ver-11.2,qode-theme-bridge,wpb-js-composer js-comp-ver-5.4.7,vc_responsive

Jordan, Montana–We made it! The final chapter of Harvest 2019 is now being written.

The last miles of our trip from Tribune to Jordan were good and bad. The road we didn’t know anything about (between Terry and Brockway) was a piece of cake. It was the miles between Brockway and Jordan that had both of us sitting on the edge of our seat and holding our breath.

When the road sign says, “Road is narrow and rough.” They mean exactly that! We only met three or four semis on the narrowest parts of the highway. Thank goodness for two-way radios! The warning sent from my radio to Jim’s would be intercepted with a worrisome voice on the other end. I knew he would have to have his fingers pried off the steering wheel at the point when we could breathe easy again. That finally happened about 15 miles outside of Jordan. When the road widened and there was, once again, a shoulder … it felt really good to be able to relax again!

After arriving in Jordan, the “dance” was the same as it had been in Chase, Garden City and Tribune. The “cottage on wheels” was hooked up and set up again. It felt like we were home. The very next thing that had to be done was get the combine unloaded and everything back in wheat-cutting mode.

We were back in the wheat the very next afternoon. There would be no time off to catch our breath.

Above average crop of winter wheat for this area. 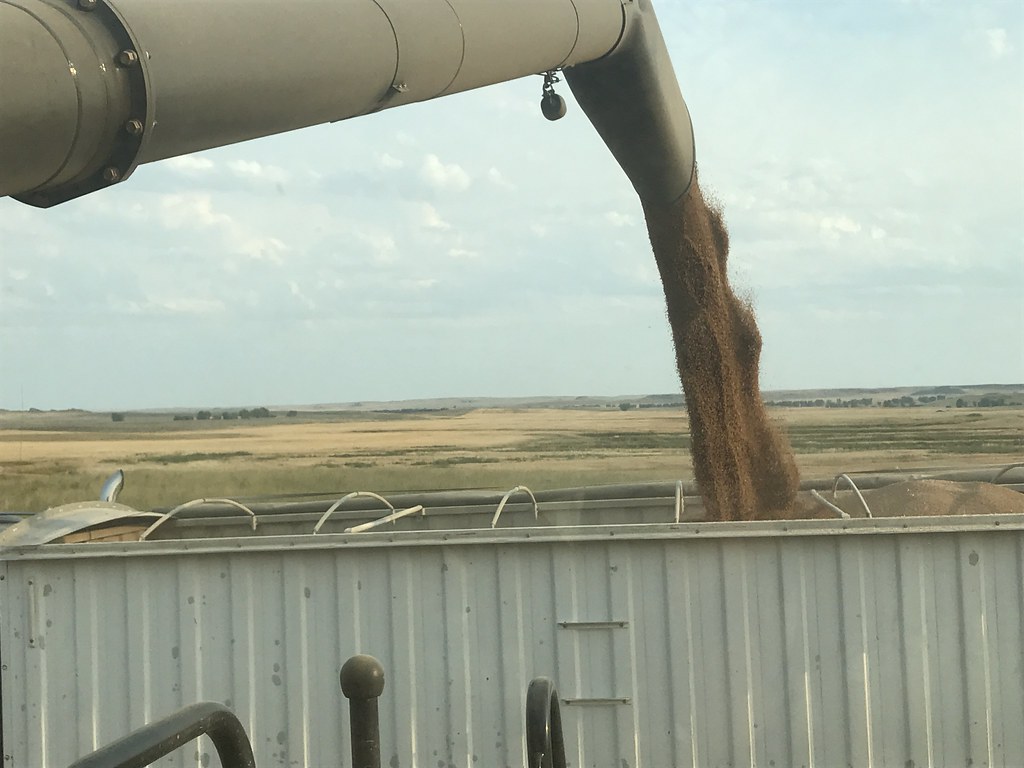 I never tire of this Montana scenery!

The average crop in this area is typically 20 to 25 bushels of wheat per acre. However, they received moisture this spring, much like everyone else, and the crops are awesome! For the most part, winter and spring wheat are the majority of what is planted here. There are a few farmers planting “pulse” crops—peas and lentils. 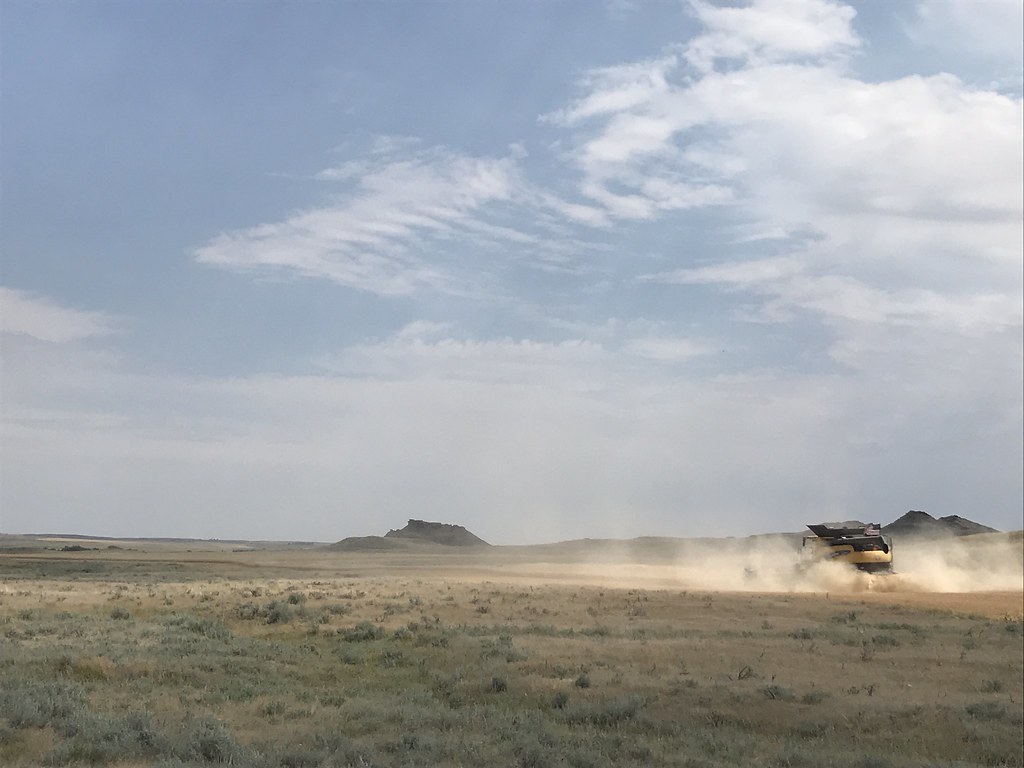 We’re not in Kansas anymore, Toto! 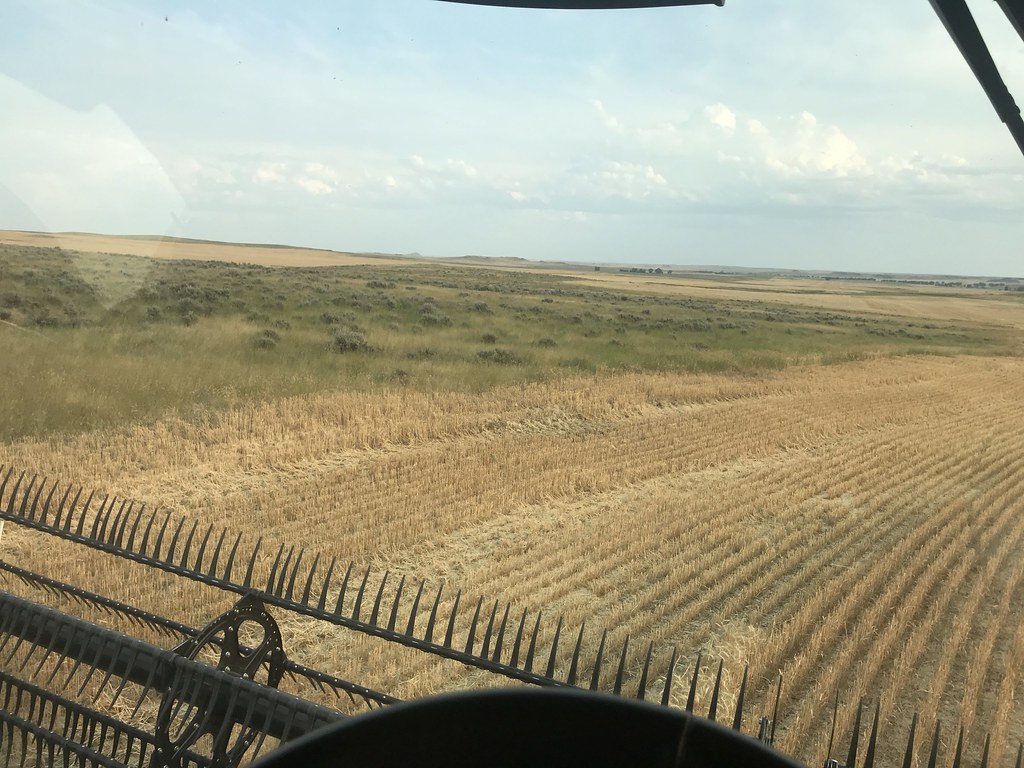 A field with 400 acres of wheat with boundaries that include curves and circles and coulees and gumbo hills. Beautiful!

We started on winter wheat. The trucks got busy right away as the crop appears to be averaging approximately 50 bushels per acre. There isn’t a local elevator every seven miles like you see in the “lower” states. Therefore, there are two ways to get rid of the grain once it’s been harvested.

So far, we’ve done both. The stats we have received from the trucker show the wheat we have been cutting is weighing 65 pounds and has 13 percent protein. 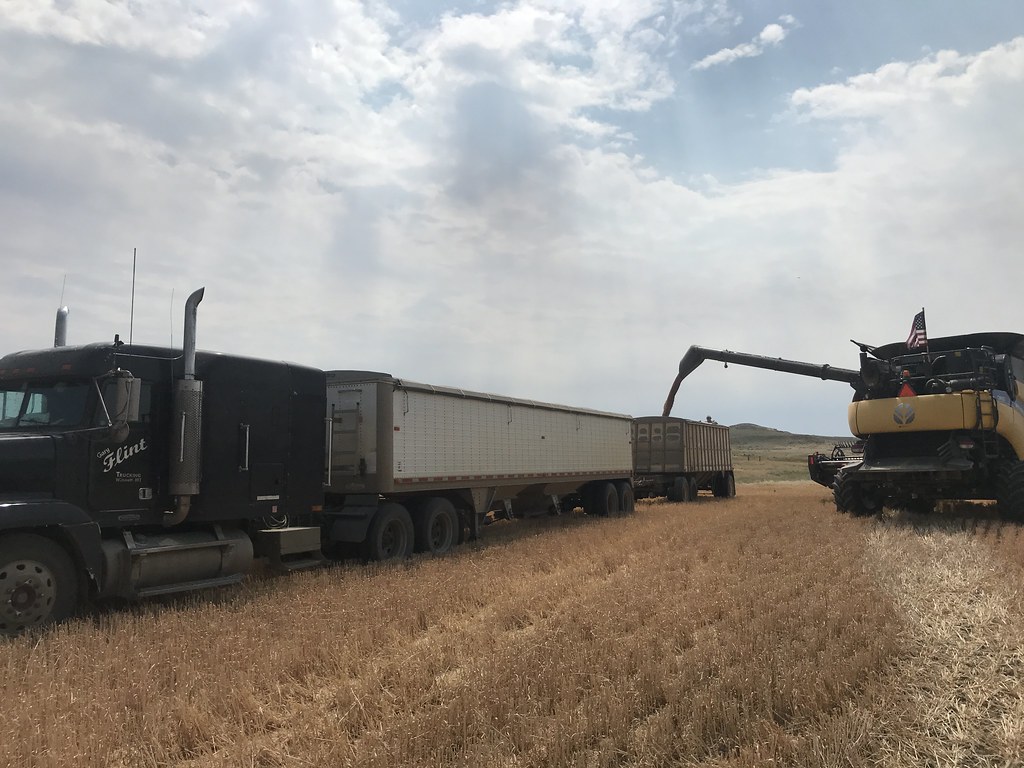 Unloading in the semi. This truck went to elevator in Moccasin, Montana and returned for another load later that afternoon. 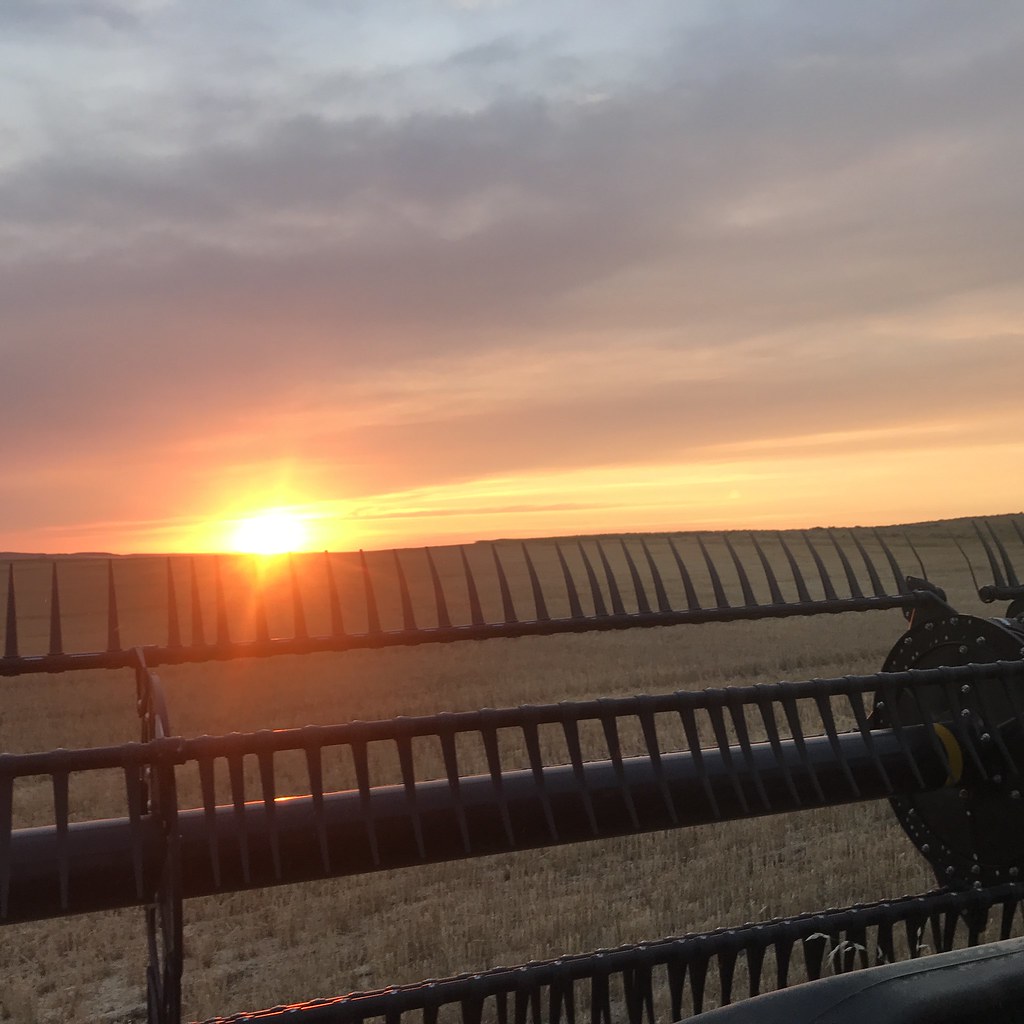 Jamie, Curt and the kids scheduled their vacation to the Black Hills to match-up with the same time we would be in Jordan. The girls always enjoy coming back to Jordan because it feels like home to them, as well. Growing up here left many memories and lots of good, lasting friendships.

When we got busy right away, I was concerned about getting to spend time with them while they were here. They came last year and didn’t get to experience the wheat field and harvest. So I was torn. I wanted them to be able to come back to the field–to smell the sweet chaff and to ride in the combine. But I also was a bit selfish and wanted to spend as much time as I could with the little kids.

And then it rained Friday evening just as we were finishing one field. Perfect! I would get to have Saturday with the kids and we could be back in the field on Sunday. God had different plans. 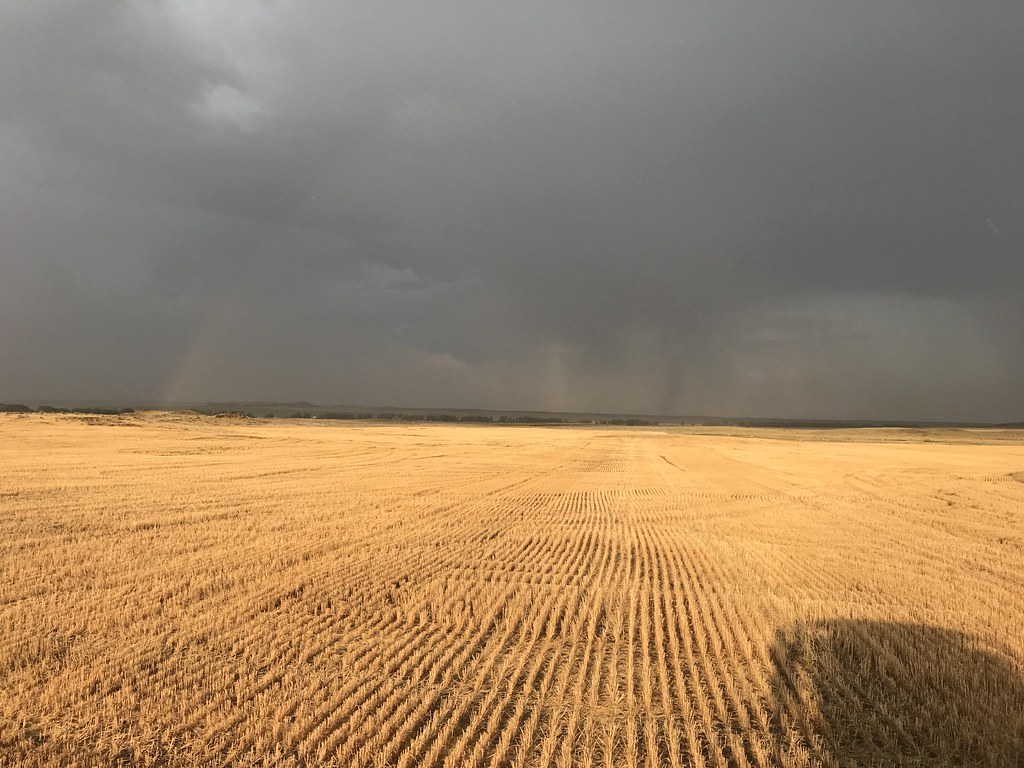 After the storm on Friday evening. If you look hard enough on the left side of the picture, you’ll see a very faint rainbow.

Saturday morning began with Jim taking the boys to the field and unloading Frank. The boys got to walk in the wheat fields, climb in the trucks and see where the combine was parked. 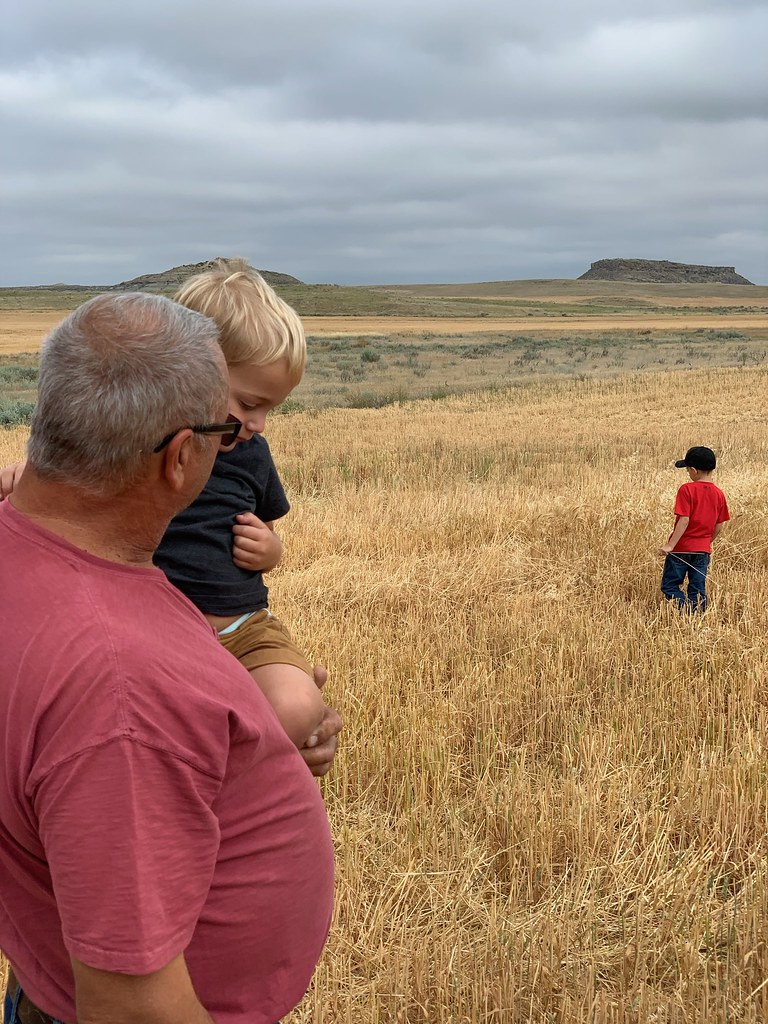 Papa and his boys checking out the wheat field. (Photo by Curt Hermesch.) 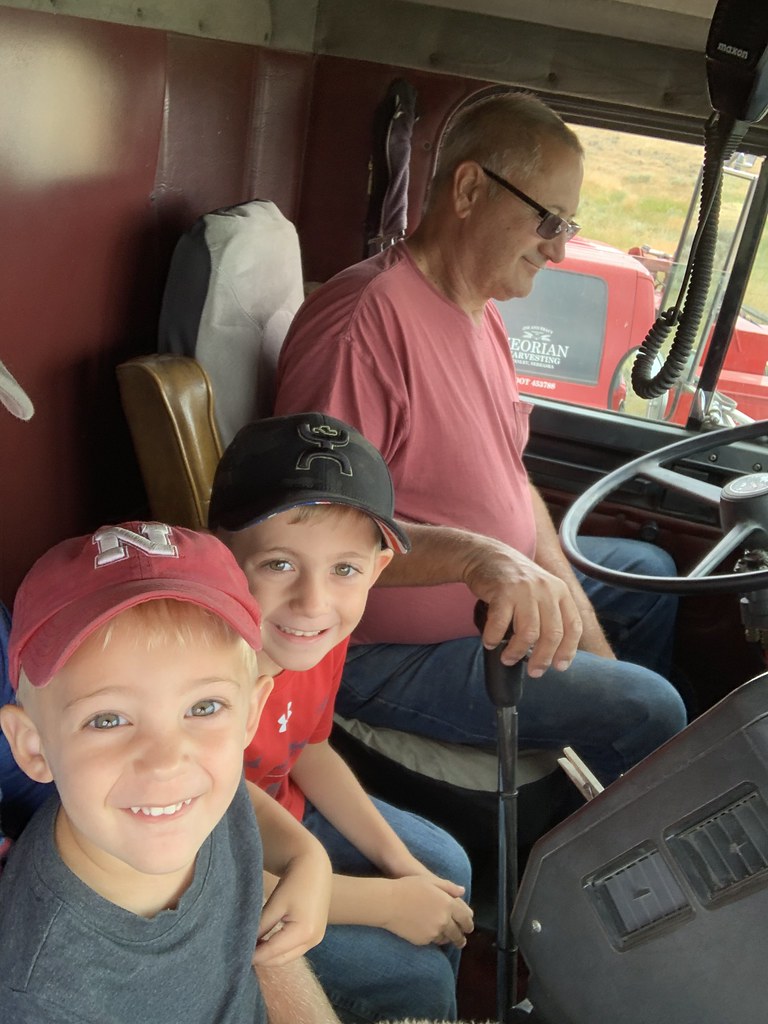 Going for a ride in Frank. (Photo credit by Curt Hermesch.) 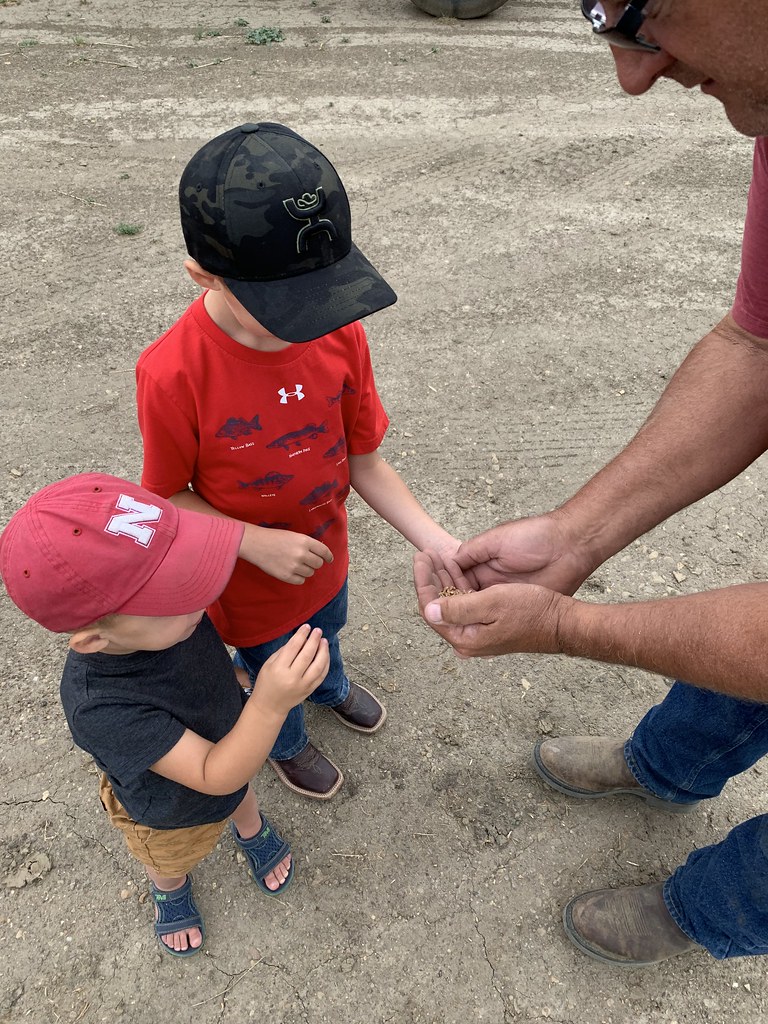 While they were in the field, Jamie, Nora and I hung out in the trailer house. Jamie did laundry; Nora and I painted, played with PlayDoh and had fun hanging out together. 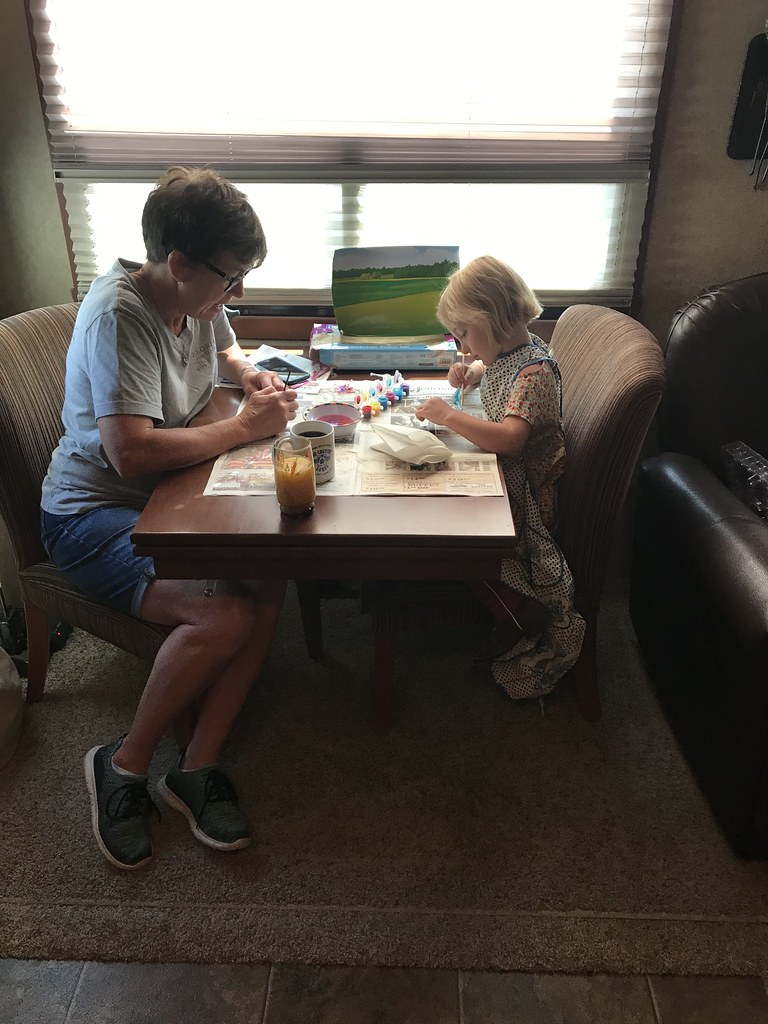 Nora loves to craft and paint! (Photo by Jamie Hermesch.) 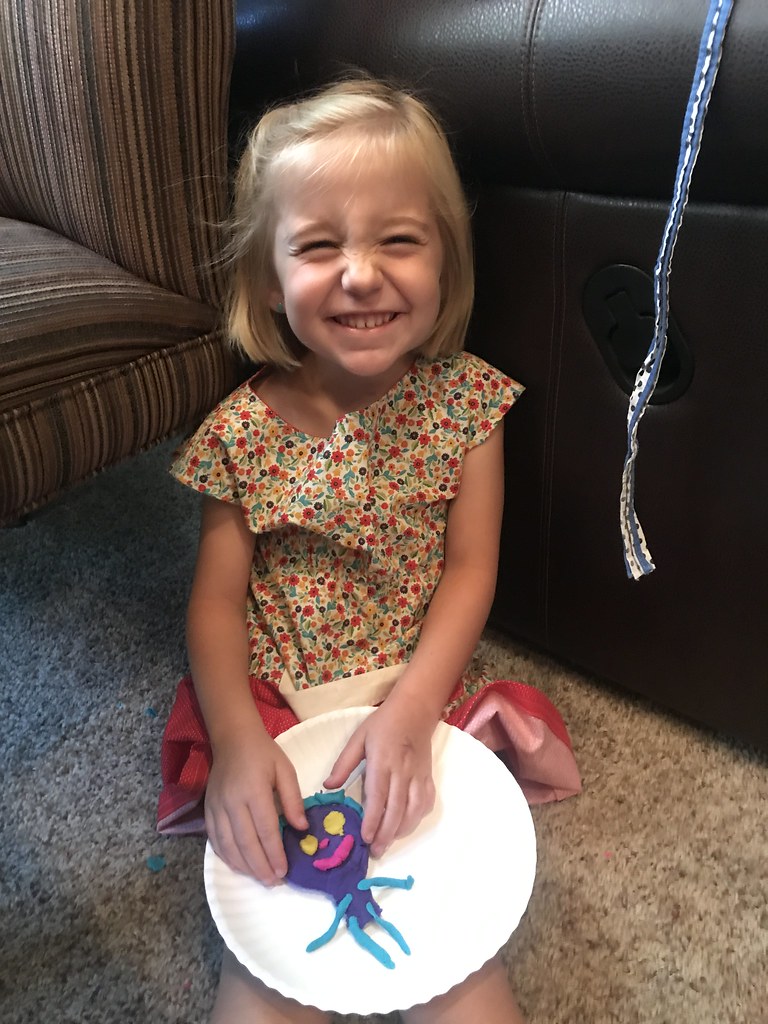 Nora’s PlayDoh creation reminded both Jamie and me of “Mr. Bill.” Remember him from Saturday Night Live? If not, Google it!

That afternoon, we attended the Jordan Ranch Rodeo. We were in hopes of getting to see the fair, too, but were too late. The kids didn’t much care about watching the rodeo. They were too busy getting reacquainted with the second generation of friends. The older “kids” had fun seeing familiar faces and catching up with each other’s lives. 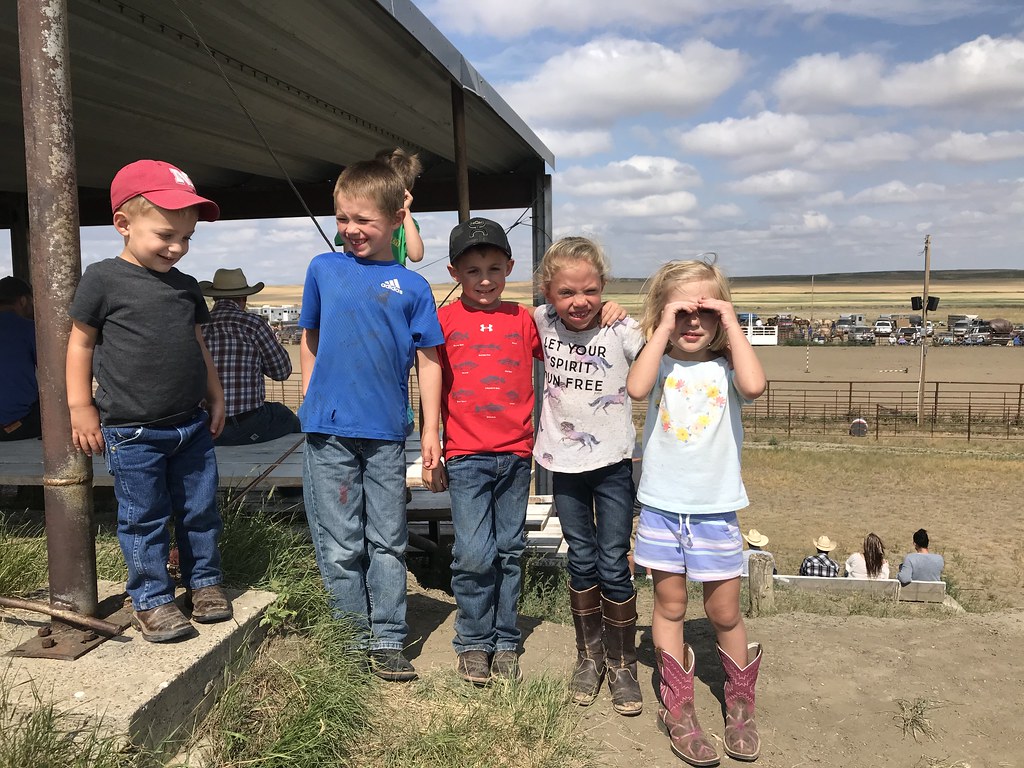 Oh, the sun was so bright! Eli, Nora and Ben getting reacquainted with their Jordan friends at the Ranch Rodeo. 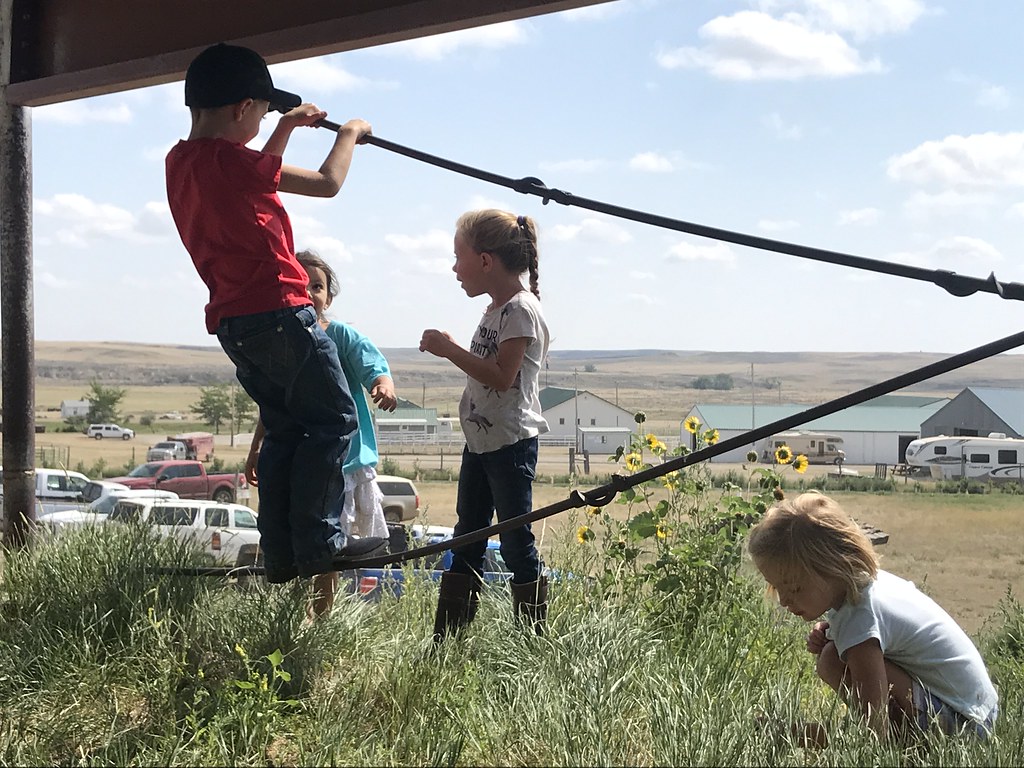 Just havin’ fun, as kids should! 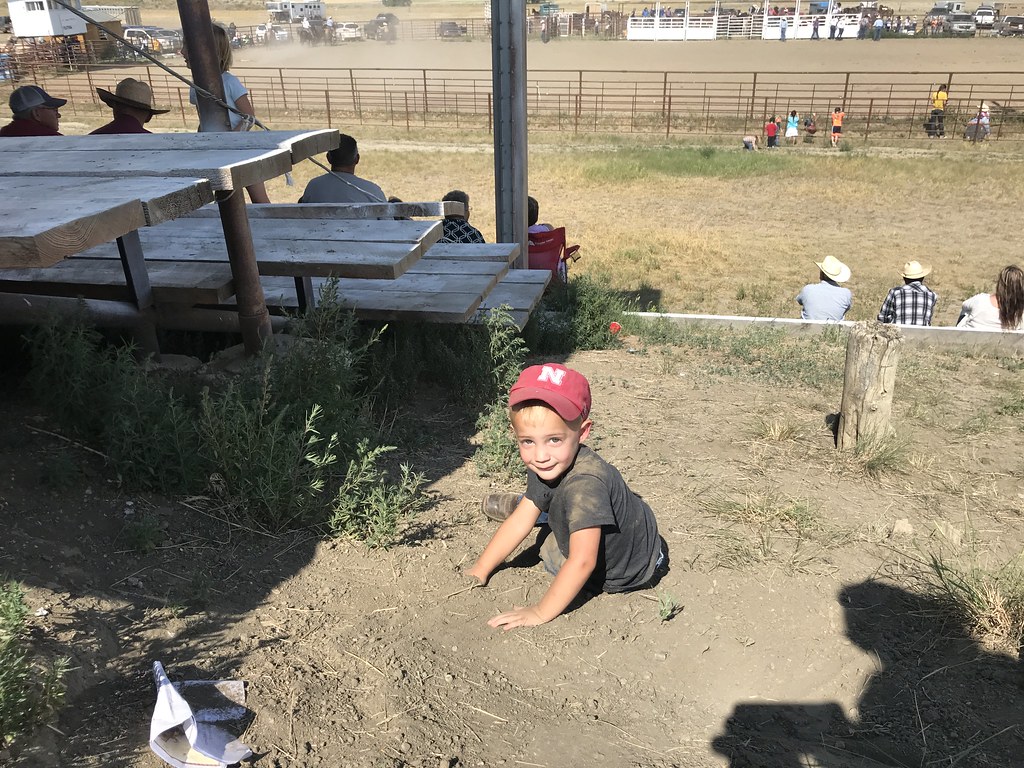 Ben driving his car in the dirt. It’s there somewhere.

And then it rained Saturday night. There would be no wheat cutting on Sunday, either.

The little kids were wiped out from their day at the rodeo and late night together. So, it was decided we would take a long drive to “The Ranch” in the afternoon. Everyone loaded up and headed out of town to a destination that was once an important part of the girls’ lives so many years ago. 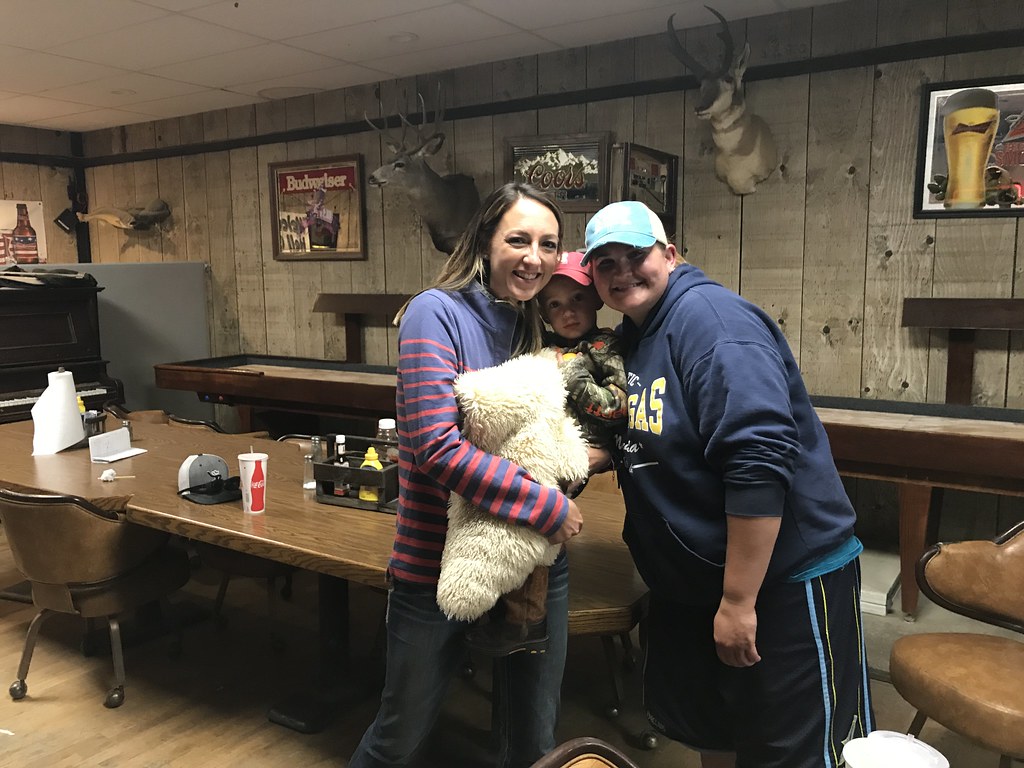 The girls attended school here when we were here long enough in the fall. They have some of the very best friends because of that experience. Only problem is … they live 1,000 miles apart and getting together happens only once in a while. 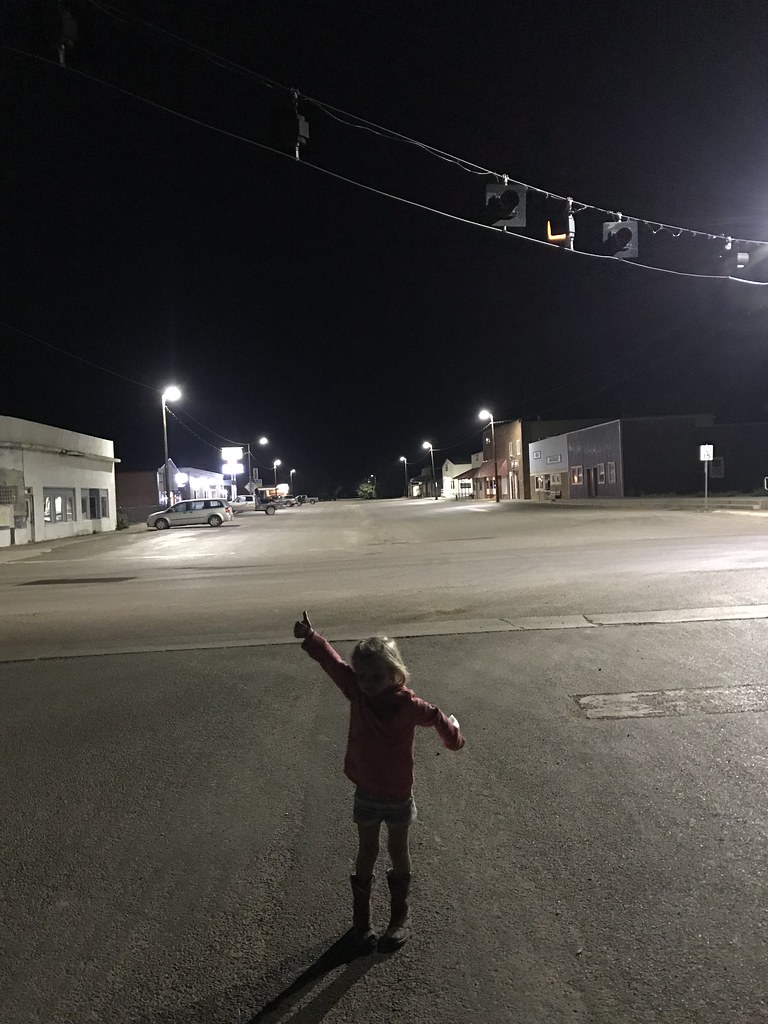 Walking back to the Garfield Hotel down the middle of Main Street—because you can. (Photo by Jamie Hermesch.)

We were headed to the two-room “Robber’s Hideout” which hadn’t been visited by either Jamie or I since 1992. I watched the little kids do exactly what the older kids did the last time we were there—climbed, explored and threw rocks. This time, though, it was the older kids worrying about snakes and who might fall off the steep edge. I was the much older one watching and remembering and feeling a bit sentimental of the years that have so swiftly gone by. 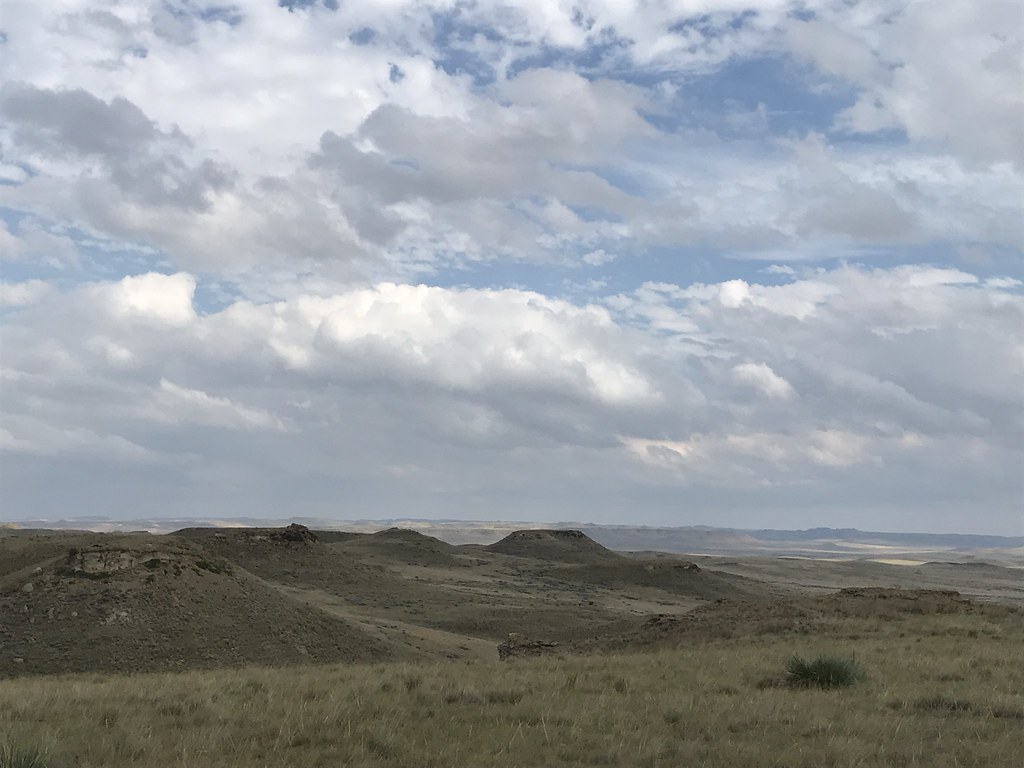 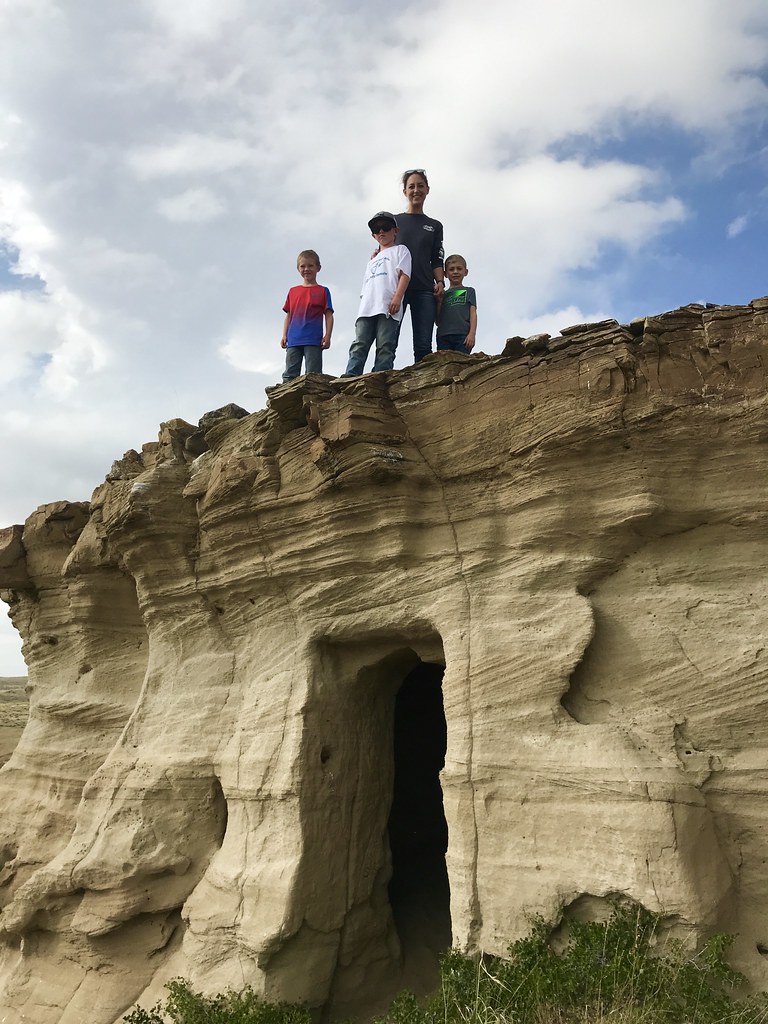 Jamie would have been Eli’s age the last time she was at this man-made hole in the sandstone cliff. Twenty-seven years later, she’s here with her own family. 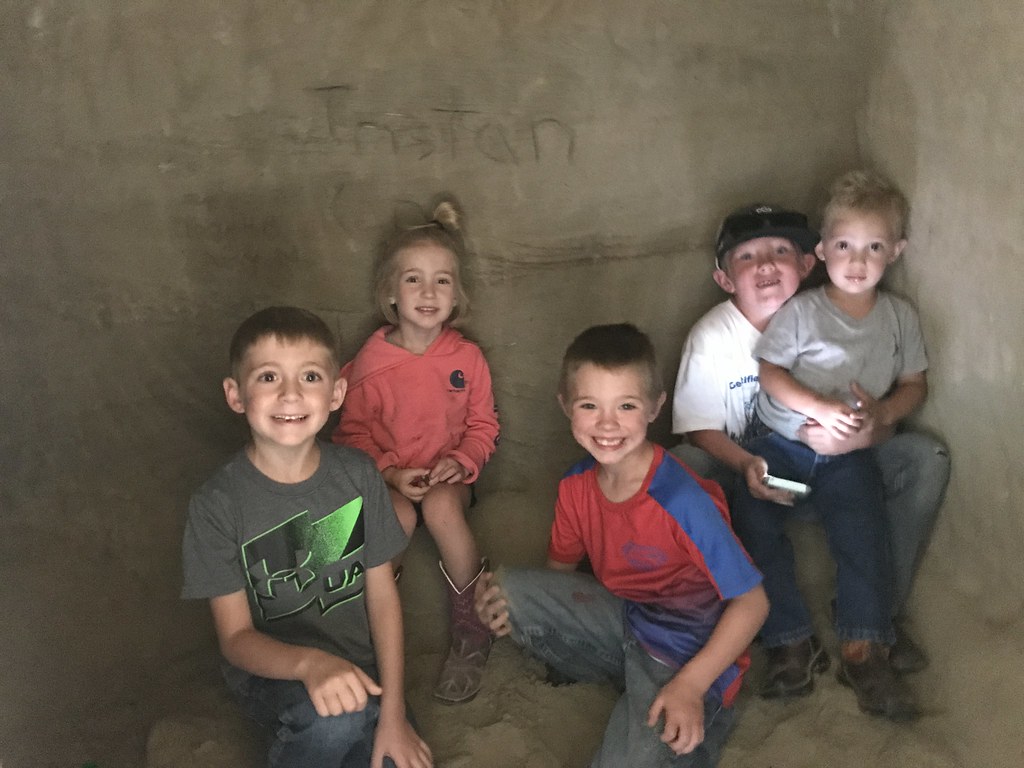 “Grandma, take a picture of us in here!” 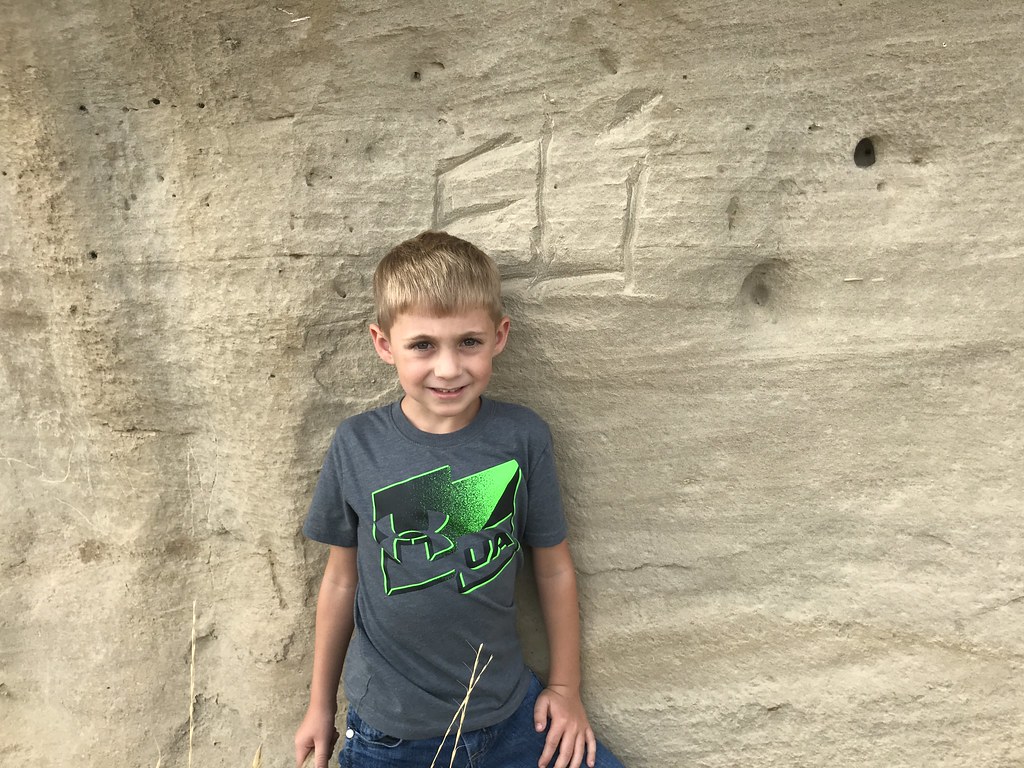 Eli and I carved his name in the side of the sandstone. We should have done it inside the “house” rather than where it will be subjected to the elements. Who knows … maybe he’ll be back in 27 more years and will remember the two of us doing this. 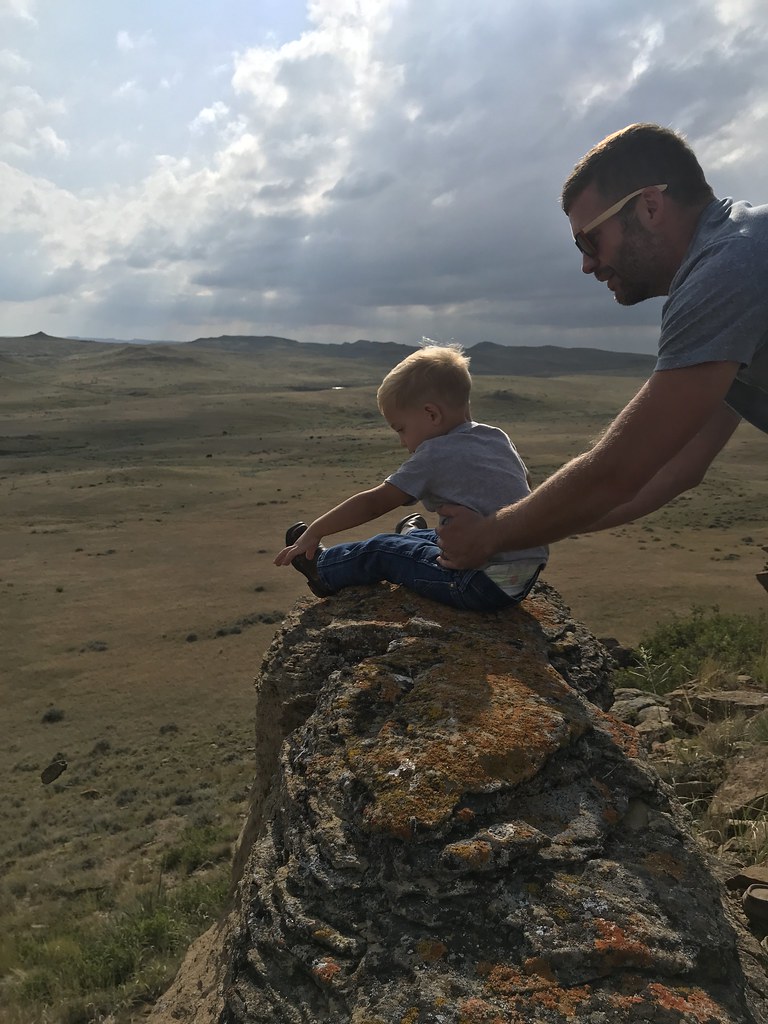 Ben wanted in on the action of throwing the rocks down the hill. 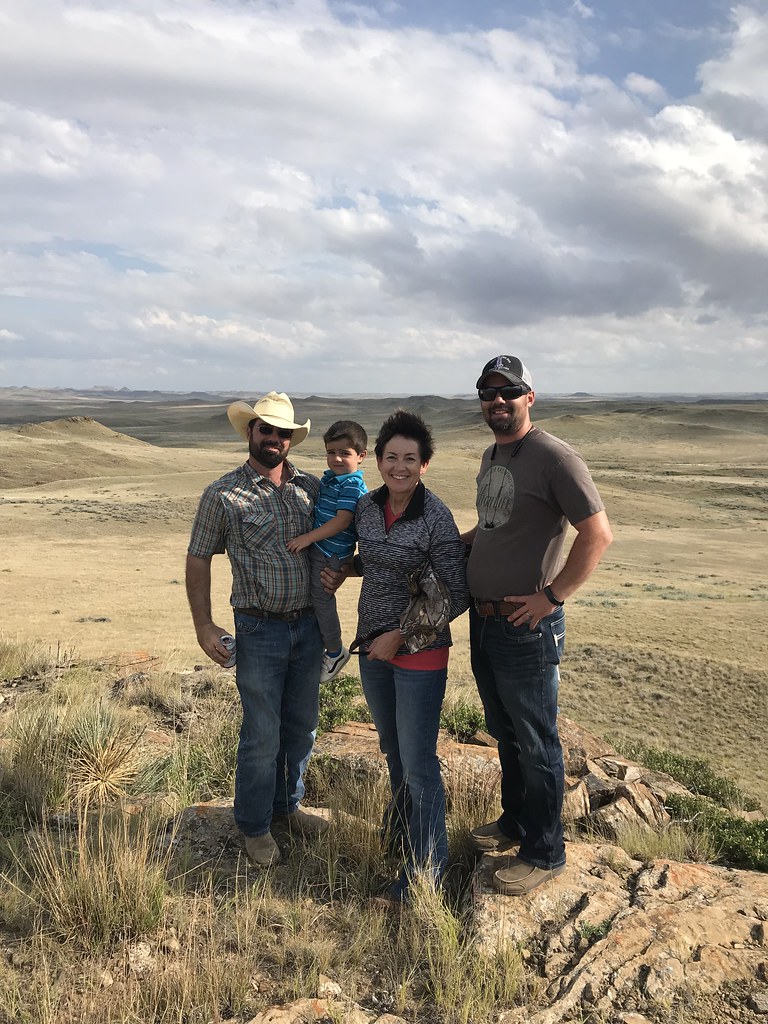 It was so windy on top of this butte. Note my nice hairdo! These two guys mean the world to me!

They said their goodbyes last night after one more meal together at the Hell Creek Bar. Jamie was determined that she wasn’t coming all the way to Jordan and not having the much-loved broasted chicken. They really do have some of the very best chicken in the world. 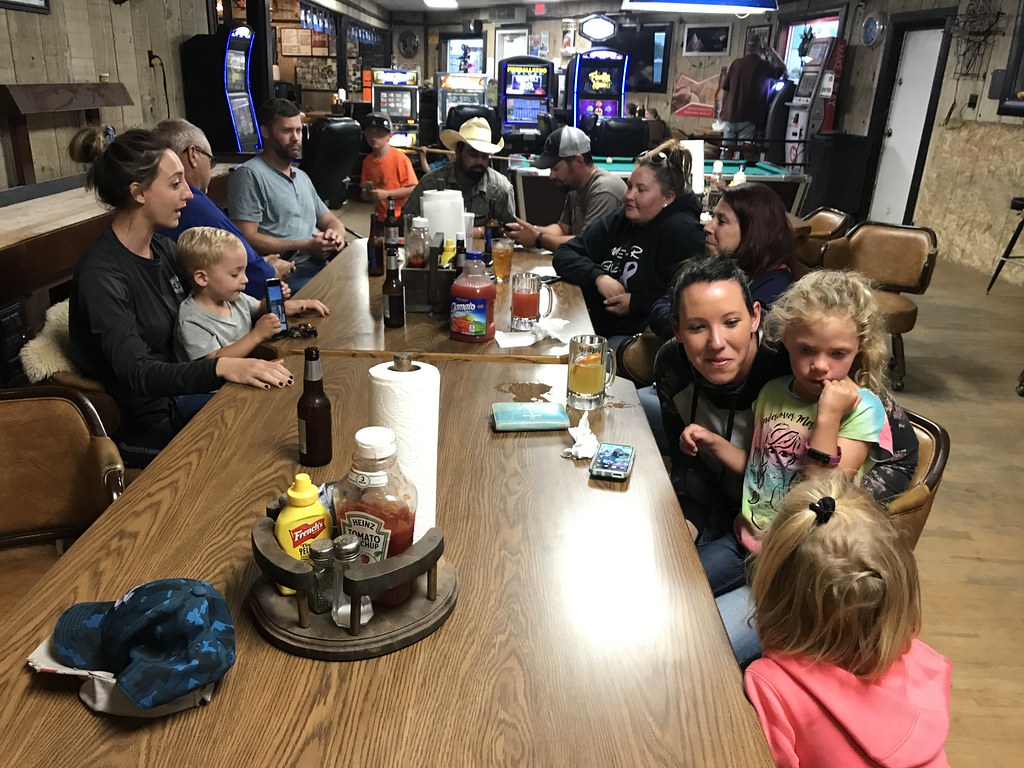 After the afternoon at “The Ranch,” we all met up for supper at the Hell Creek for chicken. And watched our weather radar for the nasty storm that was rolling in.

They’ve headed back south now. This ole heart of mine is aching once again. And the tears come so easy. I know it won’t be much longer and we’ll be home again. And we can see them more often. Eli and Nora will start school on Thursday. Eli starts kindergarten and Nora preschool. I will miss their first day. Much like I missed so many first days of school when the girls were growing up. The phone call from Jamie, though, as they were leaving Jordan made the tears flow a bit more readily, “Mom, I had to call you and tell you Eli is just staring out the window, crying and asking us if we could just go back and tell Grandma goodbye one more time.” Ugh! 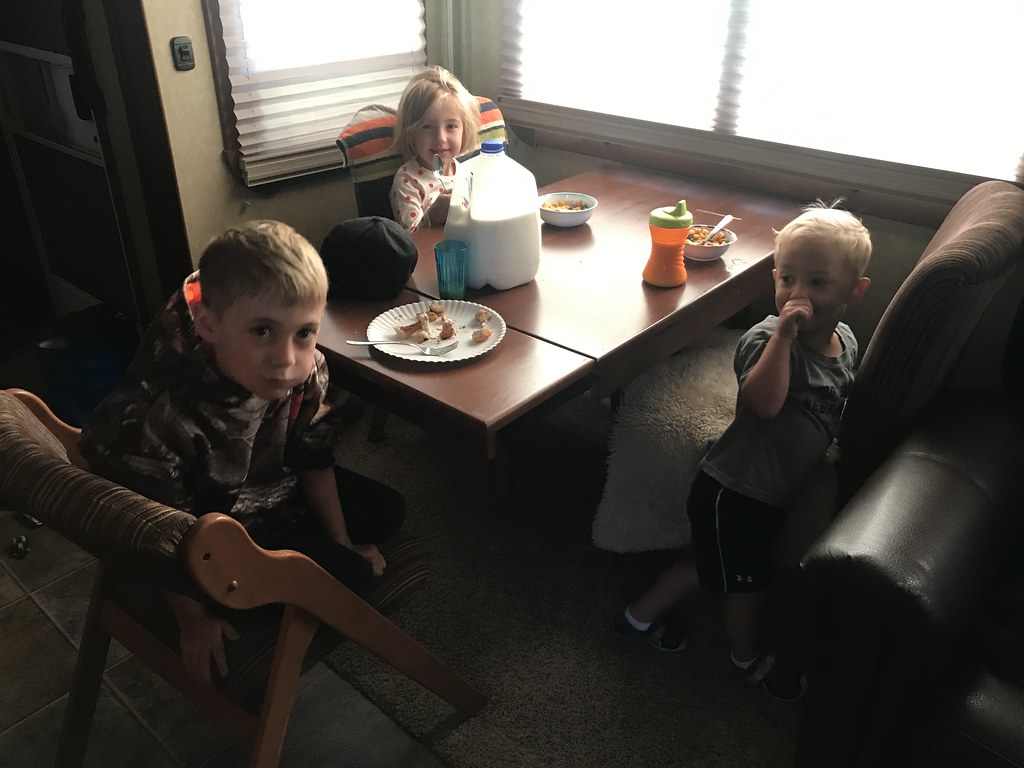 Having breakfast in the trailer one more time before heading for home. 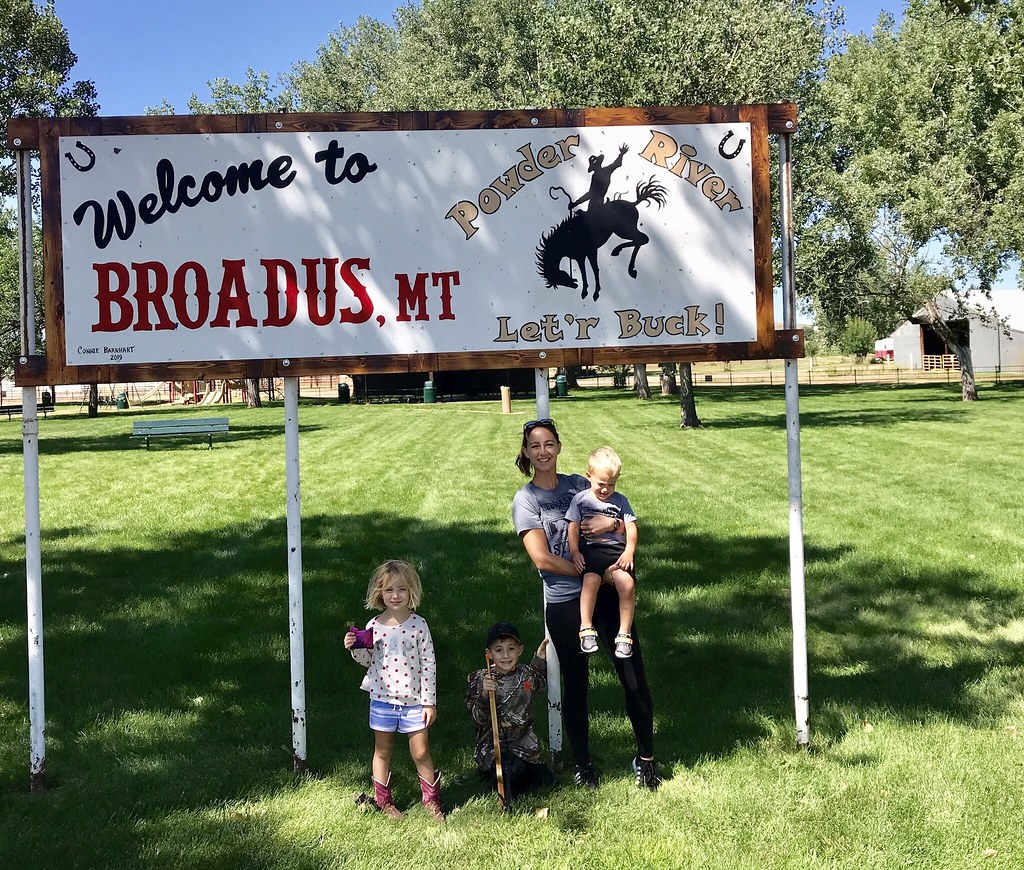 Until next time … “How lucky I am to have something that makes saying goodbye so hard.”–A.A. Milne