All Aboard Harvest | Guest blogger Martha Mintz: Taking up the baton for the steep bit of the race
19312
post-template-default,single,single-post,postid-19312,single-format-standard,qode-quick-links-1.0,ajax_fade,page_not_loaded,,qode-title-hidden,qode-theme-ver-11.2,qode-theme-bridge,wpb-js-composer js-comp-ver-5.4.7,vc_responsive

21 Aug Guest blogger Martha Mintz: Taking up the baton for the steep bit of the race

As Laura Haffner and her crew started the northern trek to the expansive dryland fields of my home state
of Montana, this custom writer and photographer packed her cameras and headed further west over the
mountains to catch the harvest rumbling to a start in the Palouse region of eastern Washington.
The Palouse is a vision on the brink of harvest. Dramatic rolling hills resemble giant swells in a vast
ocean. Instead of dark stormy, churning water, the crests and deep troughs of the waves are swathed in
hues of gold. The odd field of green, seeded to rotational crops of garbanzo beans or winter canola, add
rich contrast to the patchwork of fields. 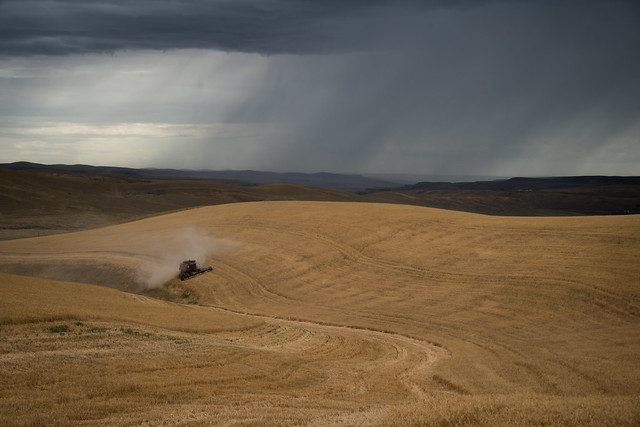 Hills undulate in every direction with all but the steepest slopes and narrowest valleys covered in crop.
At first glance they may not seem all that daunting, but much like a black diamond ski slope, the angle
is significantly more severe once you teeter on the edge.

Trekking further west from the heart of the Palouse to Washtucna, Washington, the landscape shifts. Hills
that once must have resembled their rolling cousins on the Washington-Idaho border begin to feature
dark, harsh craggy outcroppings of basalt bedrock. Their sloping sides cut sheer—the result of a
cataclysmic ice age flood. When the ice dam holding back the 3,000-square-mile Glacial Lake Missoula in
present day Montana gave way, it let loose a wall of water hundreds of feet deep to blast through eastern
Washington. In just a few days, it released the equivalent of Lake Ontario and Lake Eerie on the Ice Age
landscape. 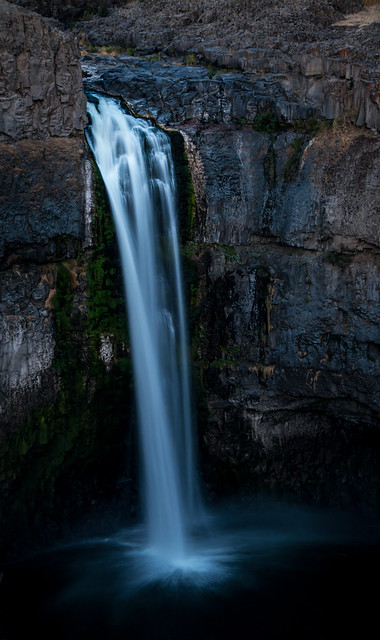 Instead of looking up at a mountainside, to see Palouse Falls you look down into a canyon cutting
deeply into the bedrock of the hilly terrain. Just 5 miles as the bird flies from the point of Brett Blankenship’s field,
the waterfall is a remnant of the cataclysmic Ice Age flood that left hilltops covered in deep, fertile soils and
bottoms with a sprinkling of soil over bedrock.

“Everyone talks about their good bottom ground,” says Washtucna farmer Brett Blankenship. “All my best
ground is on the hilltops where the floods didn’t wash it away. Our good bottom ground is hundreds of
miles downstream in the Willamette Valley of Oregon.” 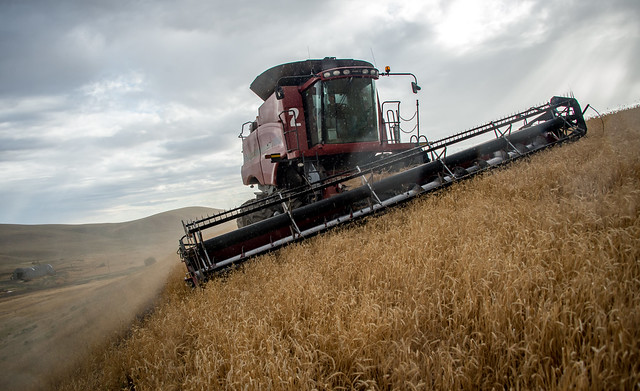 Sidehill packages allow combines to tackle steep slopes. The header is extended forward to accommodate
mechanisms that tilt the header and others that feed wheat into the system in a way that will minimize grain
loss despite angle. Here the combine navigates a rather tame ‘eyebrow’ or edge of field above a steep slope.
Notice the independent angles of the header, tires and cab.

Adapting to farm every inch possible of those daunting hills is one of the reasons most custom wheat
harvest crews don’t bother venturing here. Pricey combine leveling systems are needed to safely and
efficiently cut crops grown on up to 50-degree slopes. If 50 degrees doesn’t sound impressive, I will say
even with the leveling system it’s steep enough to make any buddy seat rider really consider how much
they trust the combine door latch. And heading straight down a mere 35-degree slope is a bit like a slow
moving, but still high anxiety, roller coaster ride. 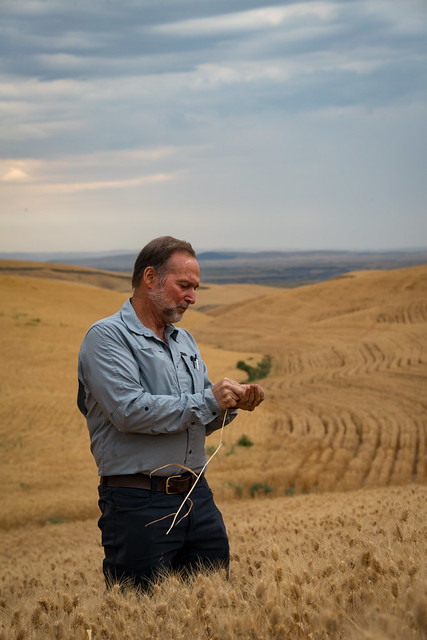 I arrived on Brett’s farm at 8 a.m. The third generation wheat farmer, chair of the Washington State
University system Board of Regents and past president of the National Association of Wheat Growers,
battles to start a service truck. Just another piece of equipment adding its complaints to the long list of
repairs plaguing Brett’s first 9 days of harvest on his 10,000-acre dryland wheat farm.
Soft white winter wheat is his main crop, but on today’s docket is hard red winter wheat. Abandoning the
finicky truck, we make a quick stop enroute to the field to check the stubby heads of his club variety of
soft white spring wheat. The club wheat is a specialty variety mixed with soft white winter wheat for flours
used in Asian countries, where most of the region’s wheat is destined. 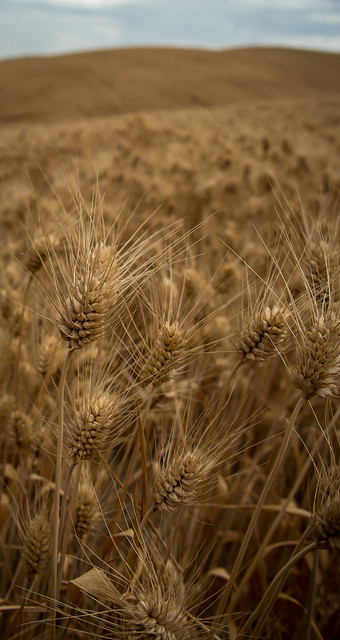 A club variety, this soft white spring wheat grows more rows on its stubby heads instead of elongating
to accommodate more kernels. Relatively few acres of this wheat are grown, but it’s commands a
premium as it’s used to mix with other low-protein, soft white wheats to make a flour with the attributes
demanded by the Asian market.

In the field, foreman Casey Rouleau reports he’s discovered a cracked universal joint on a header drive
shaft while greasing the combine.
“We keep those parts on hand,” Brett laughs. The steep slopes put phenomenal strain on many points of
the combine, including header drive shafts. They’re lucky to have caught this one before the joint gave
out and destroyed the whole drive shaft. Another weak point is tires. “We lost a set of dualies and cracked
a rim the first day out,” Brett laments.It’s not uncommon to lose multiple tires at once. Constant hillsides
put exceptional pressure on sidewalls of the large dual tractor tires. The tube in one tire will gradually
leak, going unnoticed until the remaining tire fails dramatically.
It’s 9:15 a.m. when the first cut is made—and 9:17 a.m. when harvest is called off. In a region receiving
an average of only 12 inches of rainfall, the bulk of that in spring, a mere 0.02 inches of overnight rain
increased humidity enough to have wheat heads holding firmly to their grain. Full heads found in the chaff
behind the combine had Brett calling an all stop.
Skies were overcast with more rain in the forecast, so Brett sent everyone off for a well-deserved rest. At
this point I learn Brett is a classically trained concert pianist, earning a master’s from the elite Eastman
School of Music. With time to spare, I begged the dust and grease decorated farmer for an impromptu
performance. 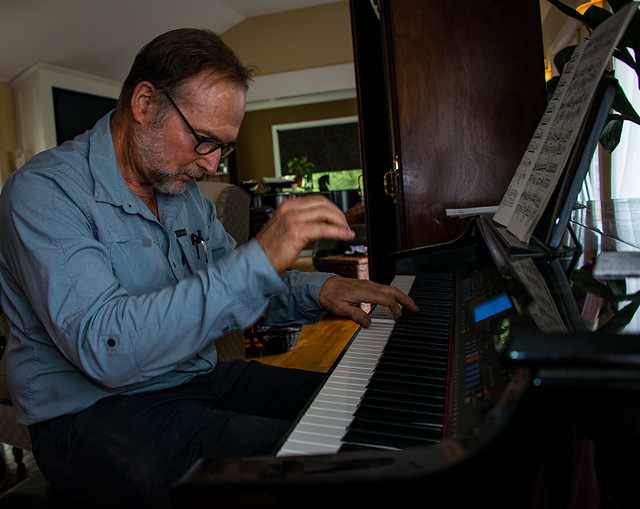 He chose his current obsession, Chopin’s Andante Spianato et Grande Polonaise Brilliante.
The 18th century mash up of multiple works into one grandiose piece would well serve as the score for
the farmer’s year of work. Hands that just greased a combine dance dramatically over the keys producing
sounds that recall the light, joyful mood of a gentle spring rain. It soon crescendos to dramatic heights
and speeds, with often discordant runs—fitting for the fervor of planting. There are quiet meandering
stretches reminiscent of long summer days, then it builds to a dramatic, clanging finish well-suited to the
noise and energy of harvest.
Even when things go right, eastern Washington harvests are dramatic. In late afternoon, after some
unexpected sunshine, I climb into the 4-wheel-drive tracked tractor pulling the grain cart with the ever-
cheerful Steve Sullivan, Brett’s cousin. The rig jumps and bumps as we scale the slope, a feat taking
several minutes, with tracks putting as many inches of rubber in contact with the steep slope as possible.
“This grain cart isn’t much of anything compared to the planting and tillage equipment we usually pull,”
Steve notes as we crest the ridge. Casey calls. He’s ready to dump. Then we play the fun hill harvest
game known as, “Where’s the combine?” From our vantage we finally spy a trace of dust rising from
under the lip of a hill several valleys away. 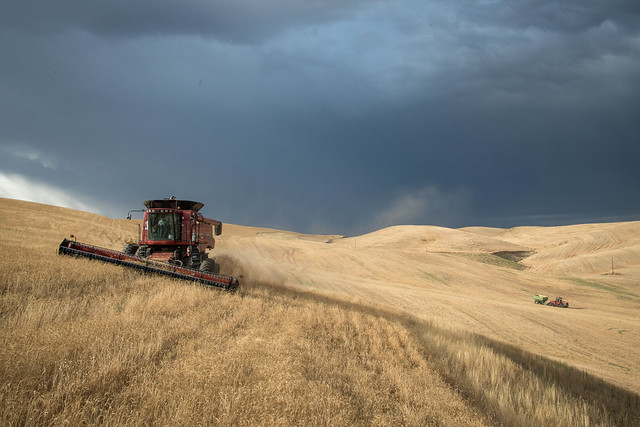 When we finally connect, Steve is sure to position the grain cart on the downhill slope to give the combine
auger more clearance and avoid overshooting grain. I hop in the combine with Casey, an unexpectedly
challenging feat with the ladder on the downhill side. Once settled in the lilting buddy seat, we cut across
the front of a hill headed toward the point of one of many fingers of the field extending to the very edge of
the ridges.
As the slope increases, the header cants to ever more extreme angles. Massive tires tilt, keeping the cab
close to level—but not quite. Steve jokes you get a real workout on one side of your body when farming
these fields. Inside the combine, more mechanisms keep the screens level to reduce losing grain as it’s
threshed.
We reach the point and head straight—and I mean straight—down the hill at the end. As we climb the
other side, Casey asks if I want to, “Cut an eyebrow.” Some places are, in fact, too steep to farm. The
seeding crew gets as close to the edge as possible, resulting in wheat that sticks up like an eyebrow from
the precipitous edge of the field. We line up with one of those edges, clinging to the slope while trying to
clip wheat that was surely seeded with a drill that hung in mid air at some points. This eyebrow wasn’t the
most dramatic, but adventure enough for this tagalong.
Soon the threatening clouds loose a sprinkle of heavy drops. It’s not enough to settle the powdery dust of
the dry, silty soils. But it’s enough to make wheat stems tough as rope. The day that saw a late start also
sees an early end. 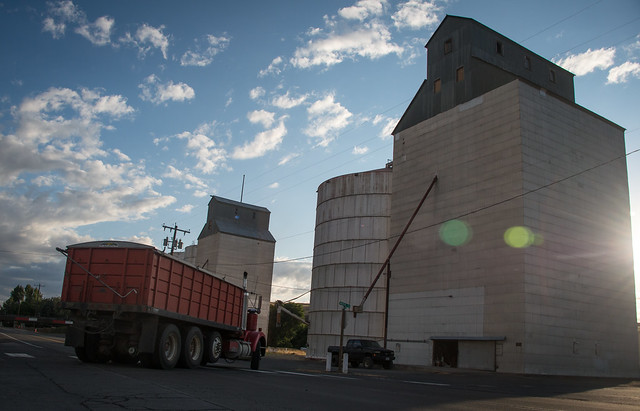 While the rest of the crew heads home, Brett and I make the 6-mile journey to the tiny Washtucna grain
elevator to deposit the last of the light day’s harvest. Depending on the market, Brett also will haul grain
directly to several nearby Snake River barge terminals, a jumpstart on the long journey across the Pacific.
“I really enjoy being a part of the machine that feeds the world. I feel that the most at planting,” Brett says.
“People focus on harvest as being a wonderful, romantic part of the process,” he continues. But, in his
mind, by that point the real work is done. Harvest is just the chore of bringing in the grain. There was a lot
of discipline in getting the crop to this point, and a lot of people. 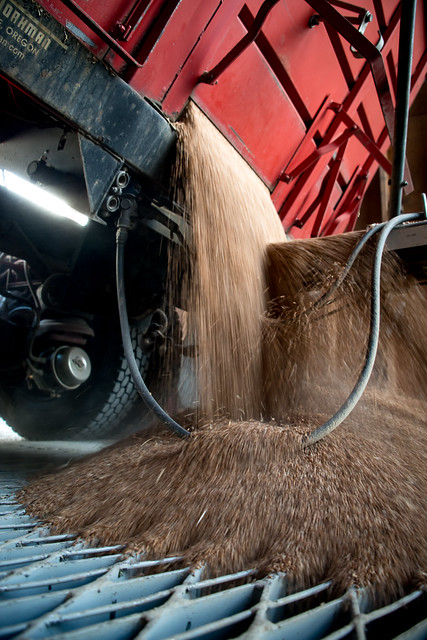 “In these challenging times I depend on my lender for help with business management, my crop advisors
for agronomic decisions, input providers for their expertise and the choices they offer in fertilizers and
chemicals for crop protection, those that make new grain varieties and technologies available to us, and
so on. So much more goes into a crop than what is seen at the end,” he says. 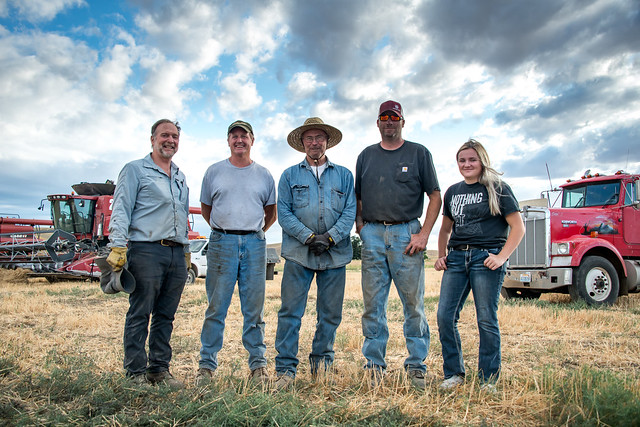 All Aboard Wheat Harvest is sponsored by Oklahoma Baptist Homes for Children, Unverferth Manufacturing Co., Inc, BASF, AgriPro, Gleaner and High Plains Journal. Brett Blankenship can be reached at journal@hpj.com.