Northern Texas: As promised, I am sprinkling some other custom harvesters into my posts this summer. I know you will enjoy learning more about other teams.

My first AAWH guest is Johnson Harvesting, of Evansville, Minnesota. They are celebrating their 61st season of custom harvesting. With that kind of longevity, there is a good chance that you’ve seen their fleet of matching blue Kenworth trucks if you are out and about during harvest time in the Great Plains region.

Johnson Harvesting is owned by Shawn and Lance Johnson. The brothers split duties. Lance operates the farming operation. Shawn, with his wife Rachel and adult son Tanner, are responsible for the traveling, custom harvesting crew. The couple’s youngest children Tucker and Tenley also accompany the family and crew on their travels from Texas to Montana.

Despite years of passing the “Johnson blue” semis on the highway, I only had the pleasure of meeting the family last summer when we were camped in southern Kansas. That night the children had a great time playing, but to their disappointment, it was short lived because harvest moves on and so do the crews. This year, they had all the time they could have wanted because like so many crews that began their runs in northern Texas, they were plagued with uncooperative weather.

One night, as we sat in camp all waiting for the ground and wheat to dry, I had the opportunity to ask the family about their experiences on the run. What makes a family continue to harvest for 61 years?

Shawn went first, “It’s addicting. It’s a rush. It’s like gambling. The thrill of the chase. Everything we do is on the what if. What if there isn’t going to be a crop to harvest? What if it’s good? What is the next phone call going to be?” He understands the ins and outs of those statements. He started going on harvest as a baby and has gone every year since.

His son Tanner spoke next, “I’ve done other things but here I am. We (he and a team member) were just driving down a gravel road into a sunset with a wheat field in the background. There’s just nothing like it.” I get that sentiment completely. Sometimes harvest isn’t just something you do. It is a feeling in your soul. It is truly hard to describe, but when you’ve found someone else who has lived it too, you both just get what the other means.

I tried to pin them down for a favorite memory but there was just too many to choose from. However, there was a theme that kept popping up. People. It is the people that make the extreme effort worthwhile. Rachel added, “Friendships you make are amazing. It feels like there’s no gap. You pick up right where you left up.” The couple added that they have a farmer in north central Kansas that they have cut for across several generations. This will be their 56th season harvesting on that farm.

Even when I asked future 3rd grader, Tenley, about her favorite memories, she replied that she loved meeting other kids on the run. She also added that riding horses in Montana was cool, but again, that involved friends as well. Her brother Tucker, who will be entering 7th grade in the fall, wasn’t present for the discussion. He was hanging out with the crew in their camper. Even absent, you could see that relationships are what he valued by where he was. They make the harvest world go round on so many levels.

Since we had this conversation, the Johnson crew has been able to roll and are nearly finished in Texas. They run late model Case IH 8250 combines. The team has been seeing yields average around 30 bushels an acre and test weights are 58 to 60.

Thanks to Rachel Johnson for providing the photos below. 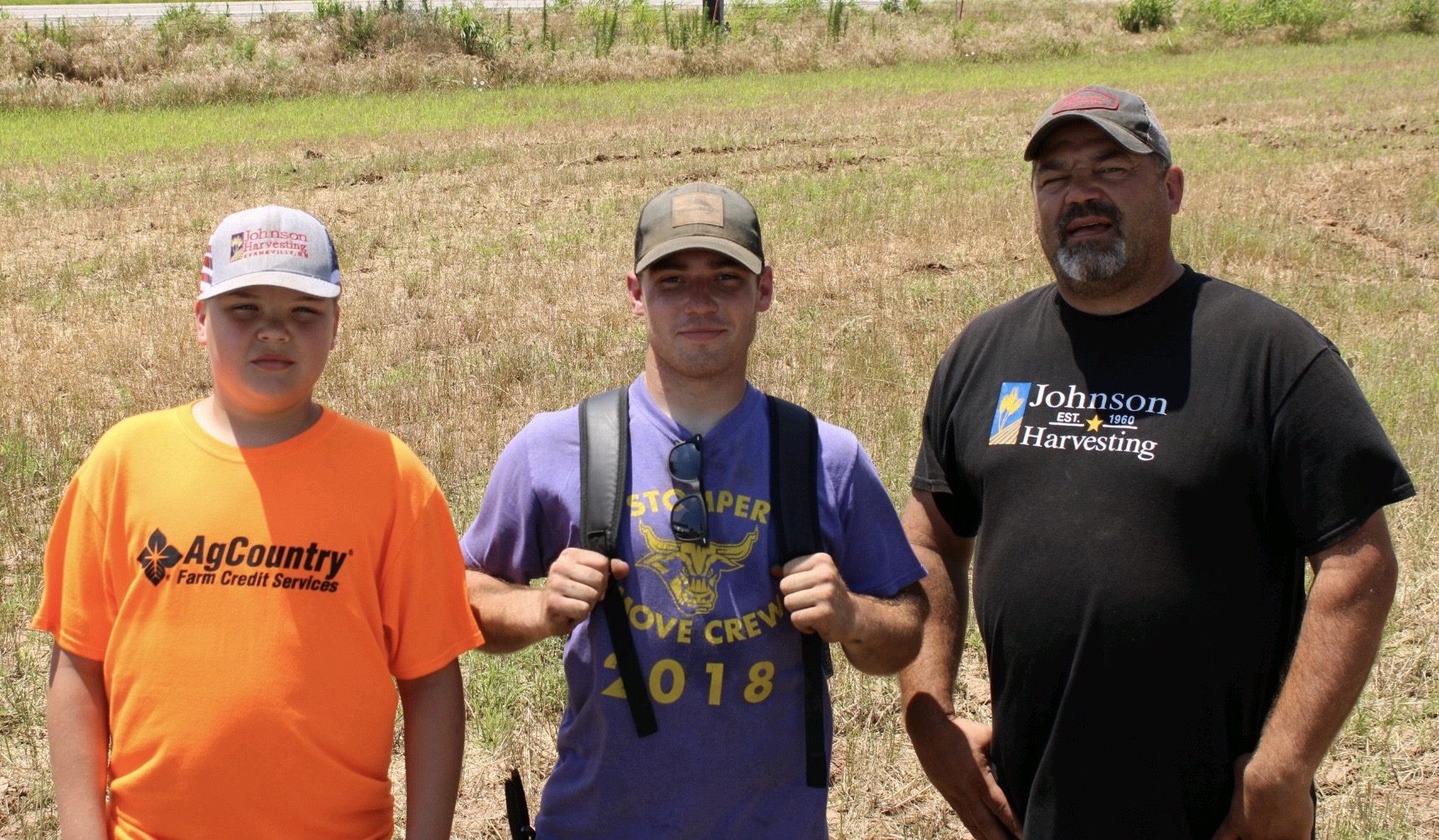 The Johnson’s youngest son, Tucker, has been spending some time operating the grain cart this summer. (Photo provided by Rachel Johnson). 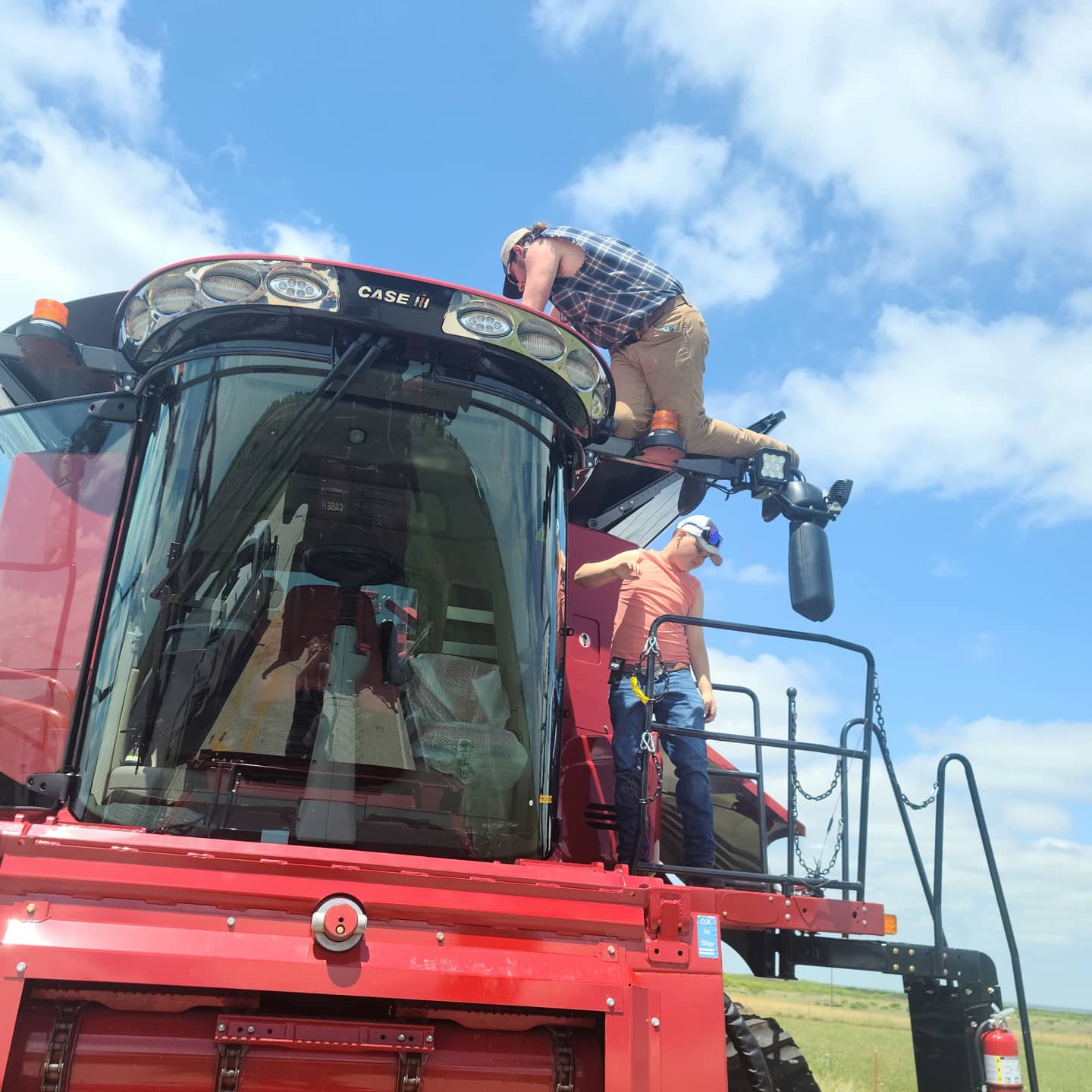 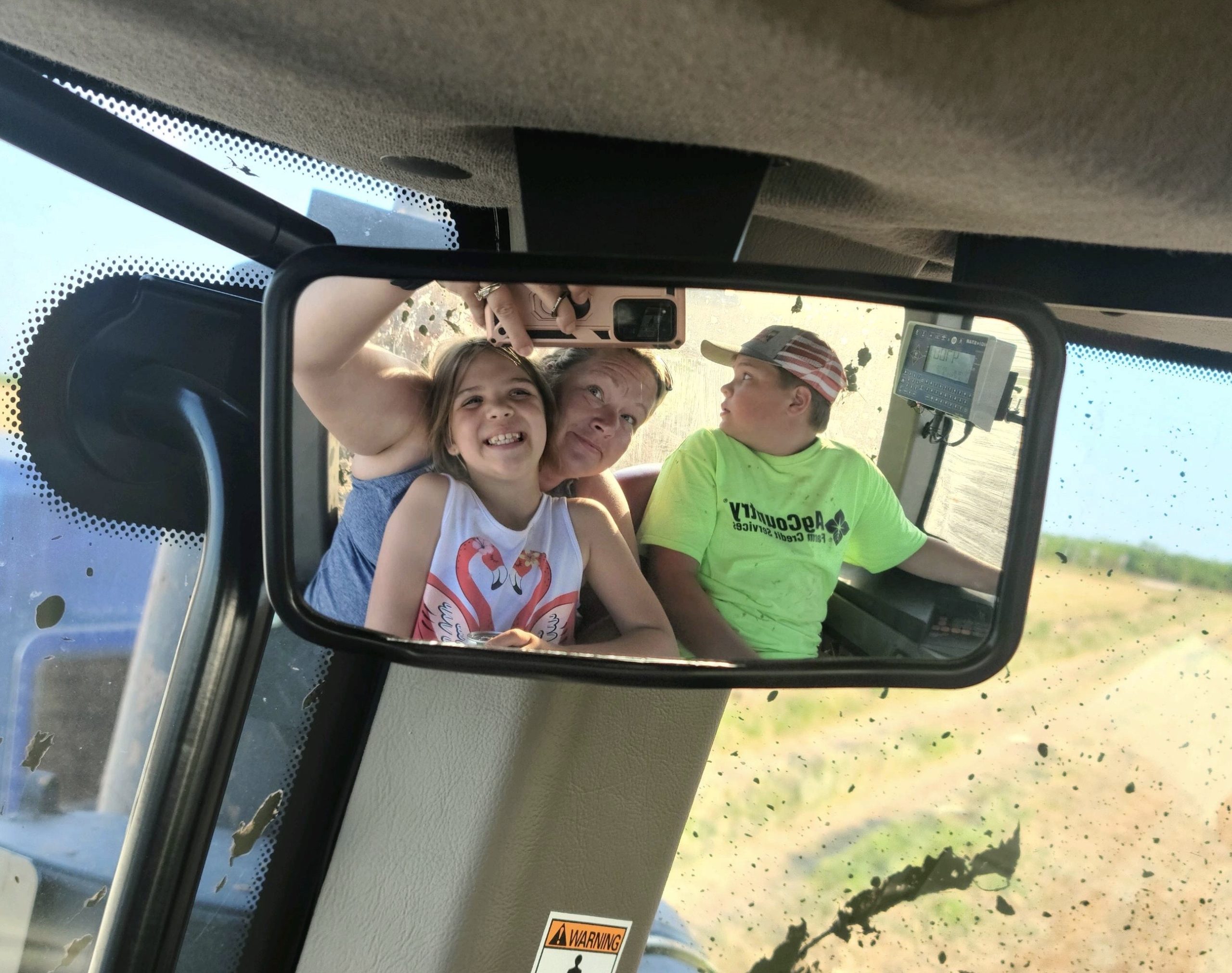 Quality family time happening in the cab of the tractor. (Photo by Rachel Johnson.) 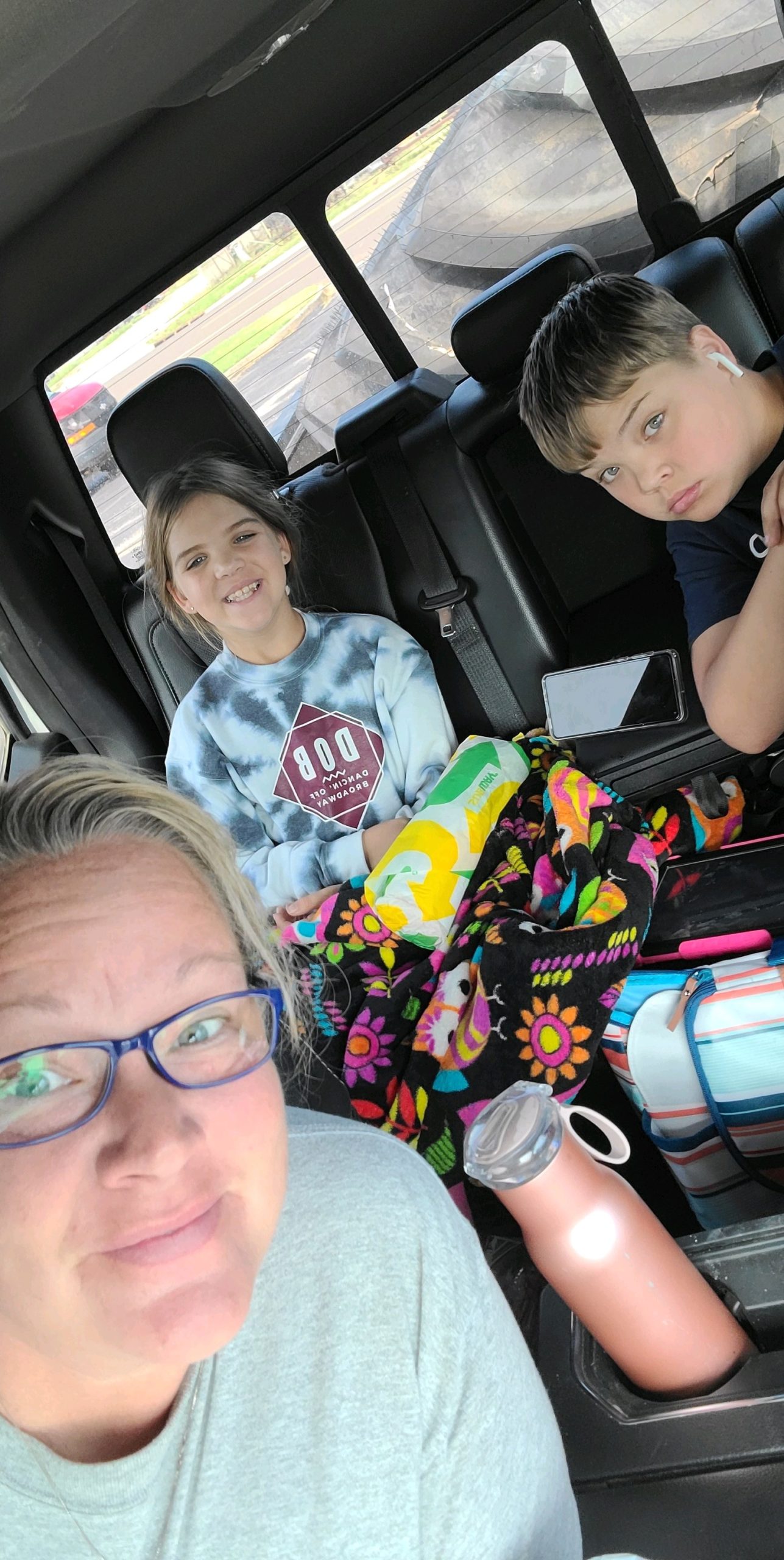 Cozied up for the miles ahead. (Photo by Rachel Johnson.) 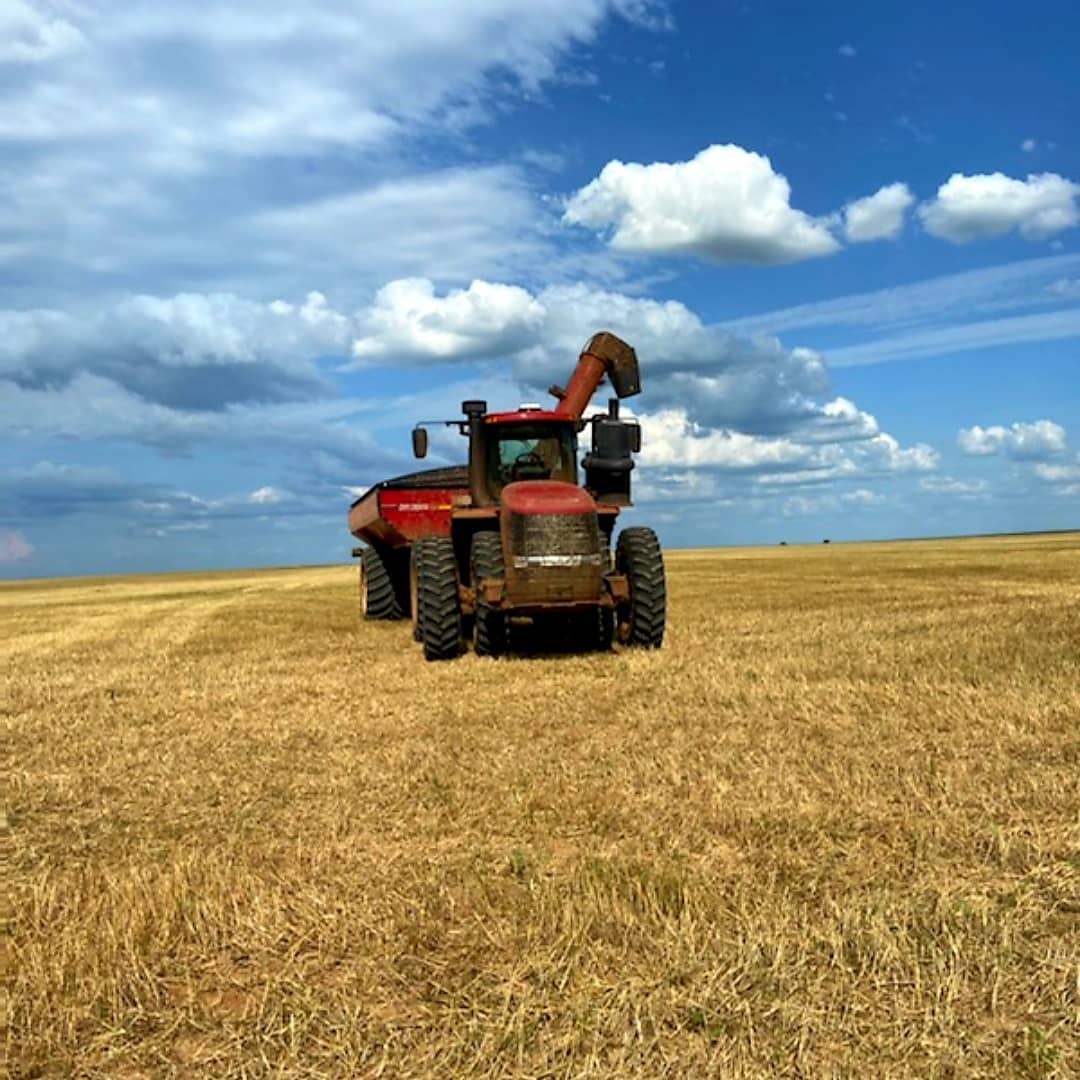 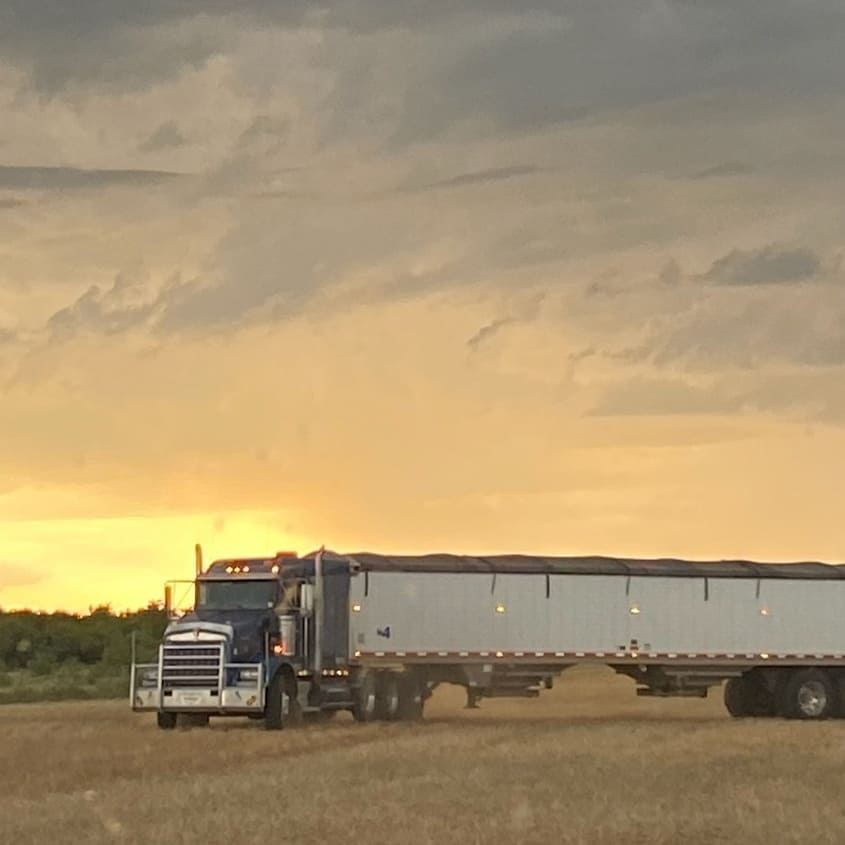 Truck rolling out before the storm. (Photo by Rachel Johnson.) 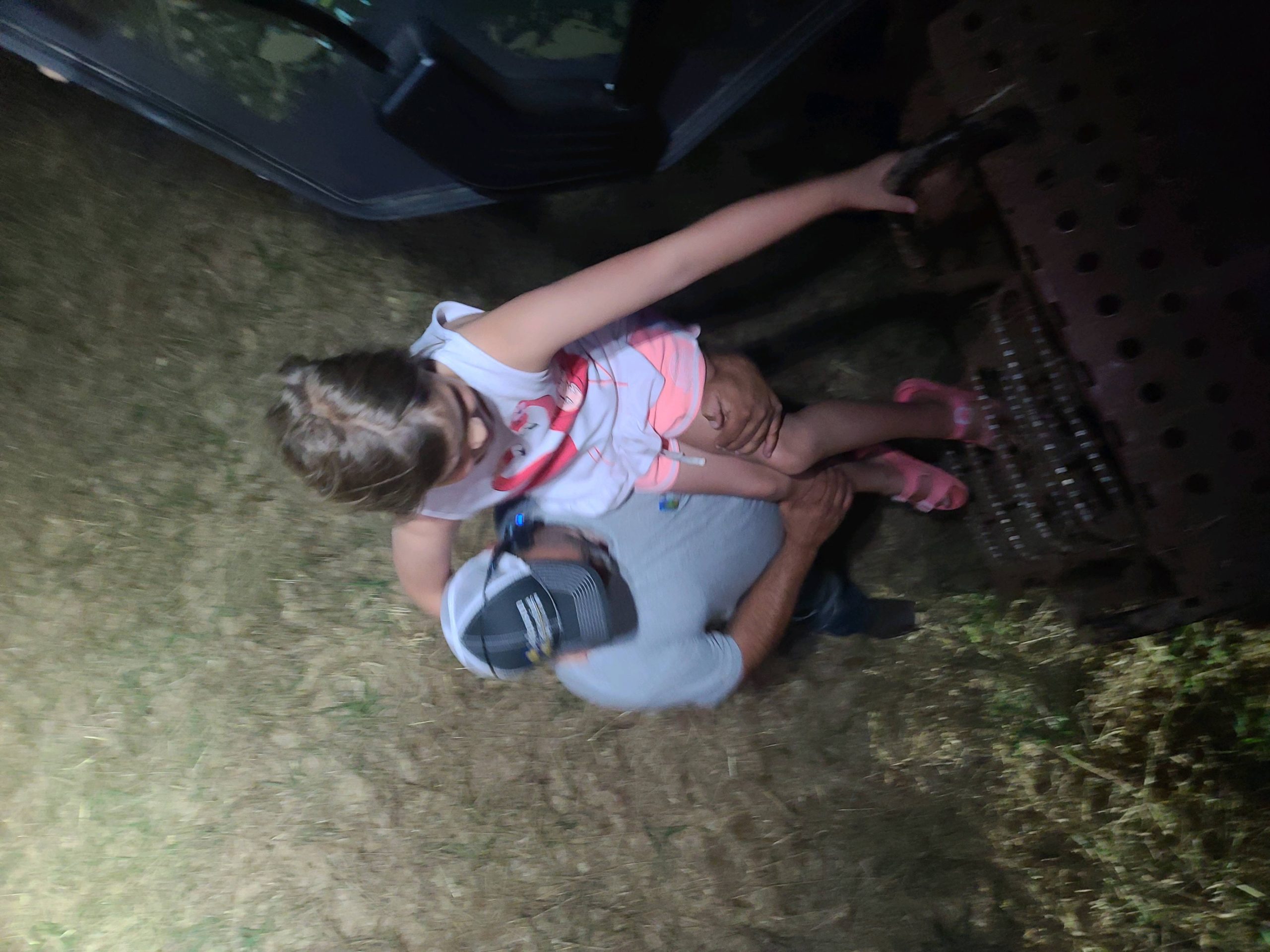 Dad and daughter about to go for a ride. (Photo by Rachel Johnson.) 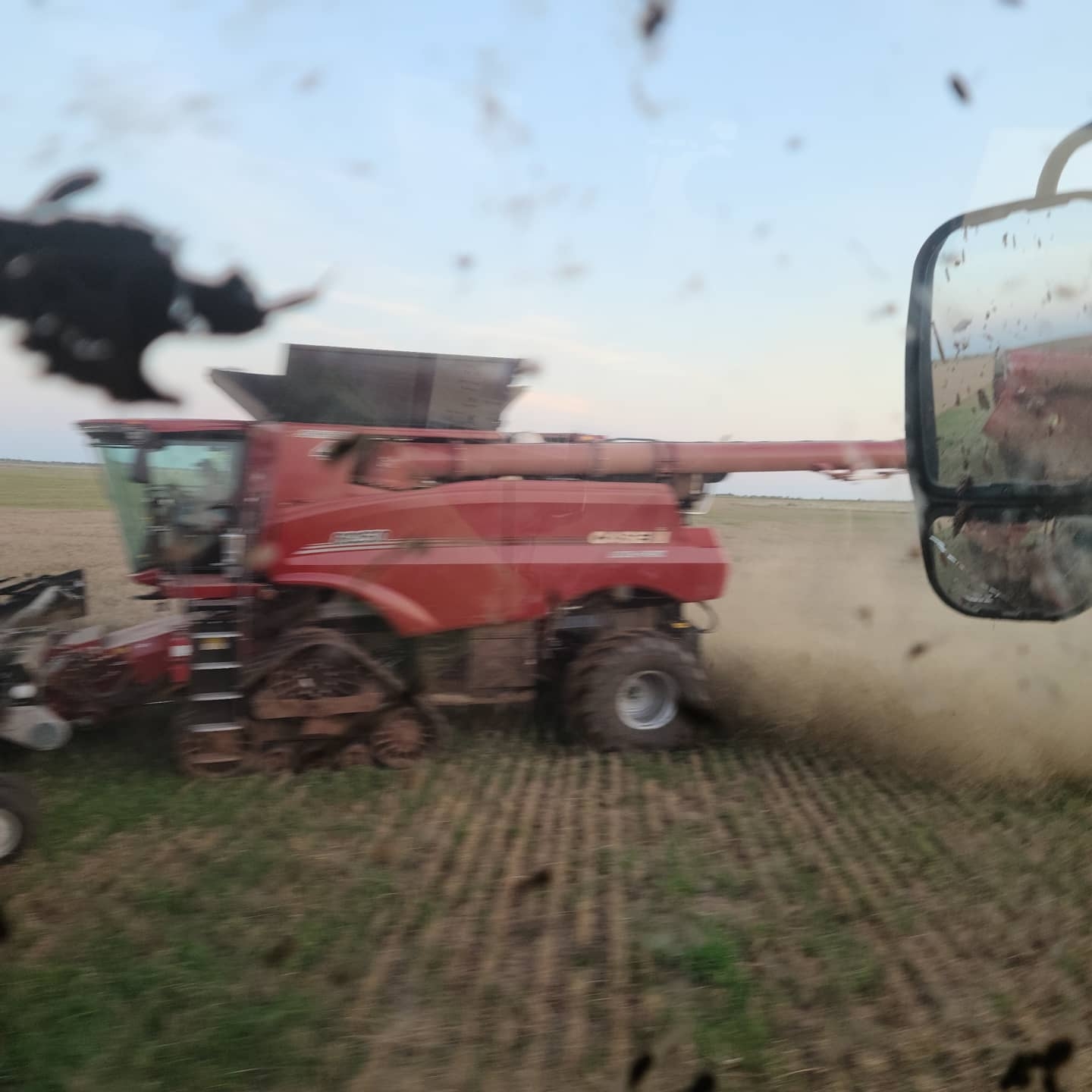 Judging by the mud on the window, those tracks on the combine were needed. (Photo by Rachel Johnson.)