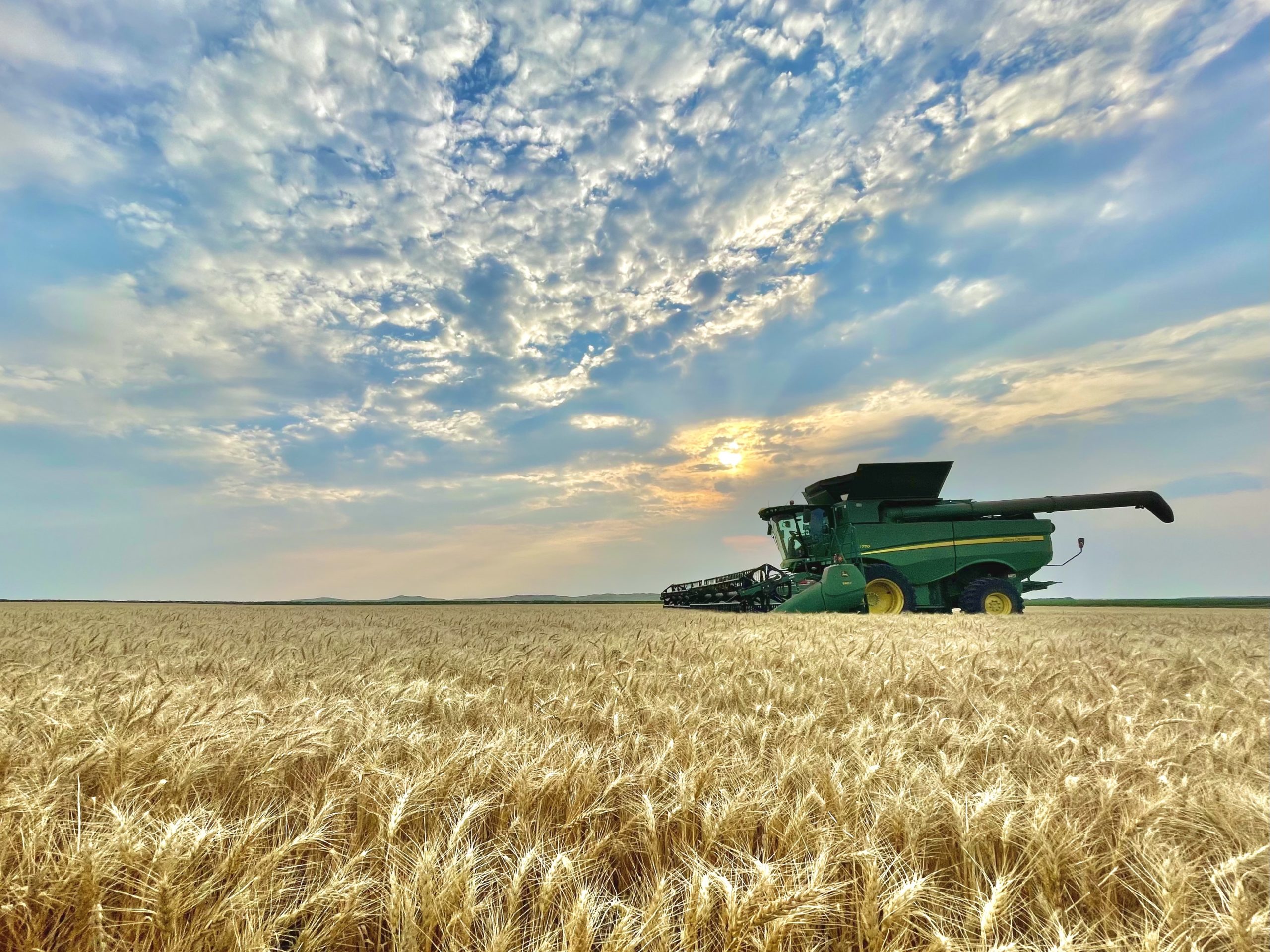 Onida, South Dakota–What’s your favorite type of show to watch? Is it a mystery or a romance? Perhaps a comedy or science fiction? How about a reality show, maybe one that stars custom wheat harvesters that rarely get a day off because it never rains?

I think I’ve seen this episode before, and apparently it’s so popular they are airing it again here in South Dakota. I’m not sure how much I liked it the first or second time, and after watching it again for the third time I’m reminded exactly why. The run time is too long, the plot is overly simple, and it repeats too many scenes. I don’t want to spoil the ending for you, but I can give you a synopsis of this show. 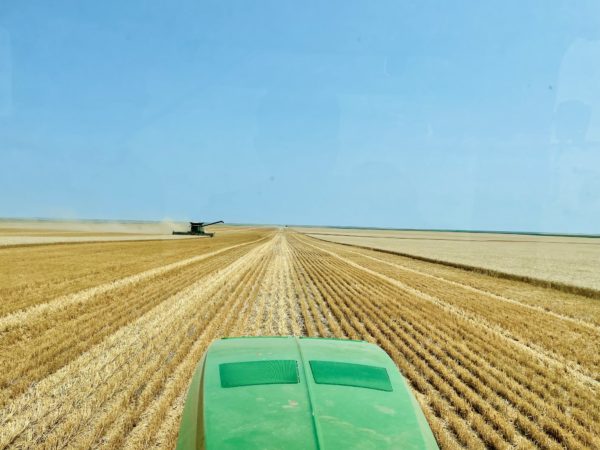 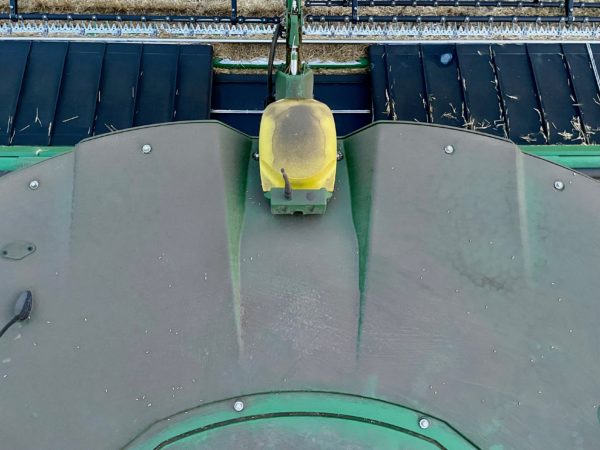 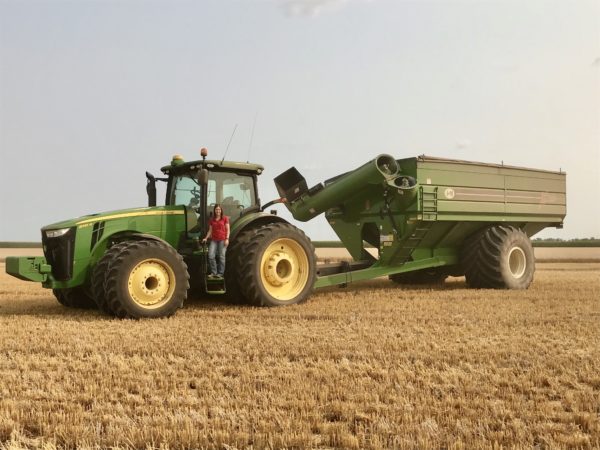 Mile long rows keeps Brenda’s 1,450 bushel chariot busy, even when yields are low. An overhead view from the combine cab shows the layer of grime that’s collected on the equipment, never washed off by the heavy downpour everyone wishes for.

The crew gets up early and heads to the field. It’s already hot, humid and windy, so much they sweat through their shirts just fueling up the equipment and washing windows. As soon as the combines get a dry sample it’s go time. For the next 12 hours it’s like this show is stuck on repeat. They fill the grain tank, unload on the grain cart, and then go cut another load. There’s no stopping with mile long passes, and when the trucks return from the elevator there is another load already waiting for them. The crew heads home around midnight and collapse into bed. This scene repeats over and over, day after day. I’m all for movie marathons, but this one is seriously getting a little old. 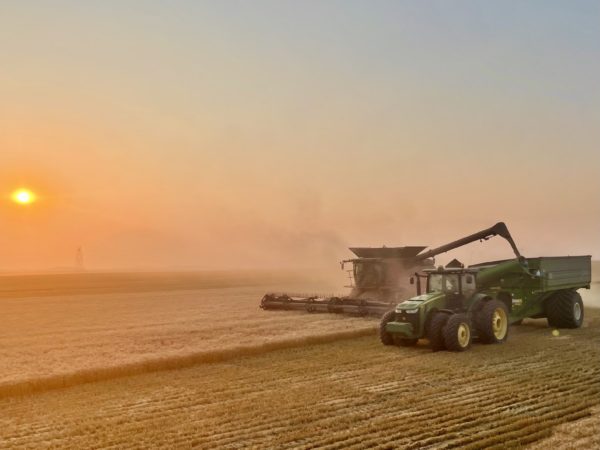 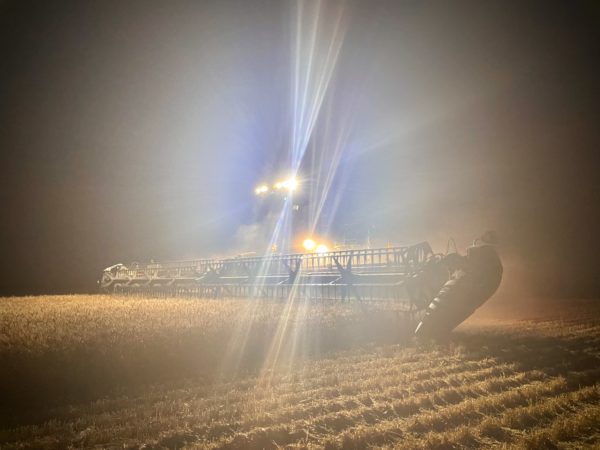 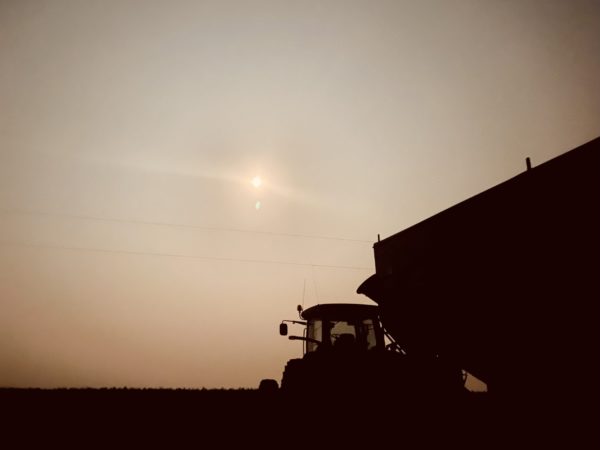 The sunsets are impressive this year, with long days turning into late nights. The full moon cast an eerie glow as dusk arrives, and abstract reflections form in the dust from the machine’s floodlights.

The one rainy day we did have was not spent resting, but instead we retrieved the grain cart and tractor from Iowa. Since then we have harvested every day since arriving in South Dakota. Mother Nature hasn’t been deviating from this summer’s script that stars a diabolical South Dakota drought. We knew the yields would be poor, and after harvesting a few thousand acres we can confirm the winter wheat is averaging around 35 bushels per acre in this area. That’s nearly one-third the yield of last year’s winter wheat crop. The quality has been fine with test weights are around 60 pounds and protein levels are 15% or greater, but there is just not enough bushels in the field. 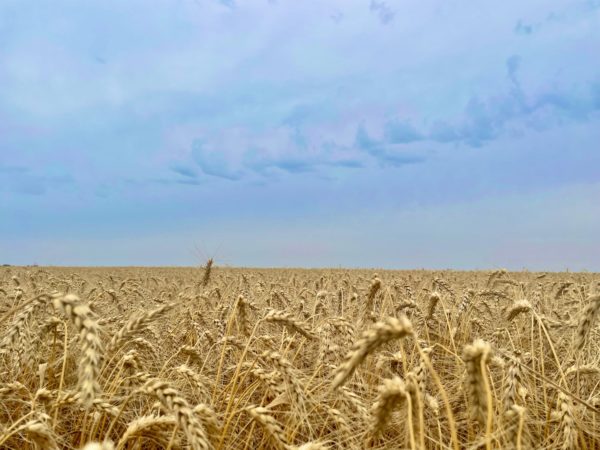 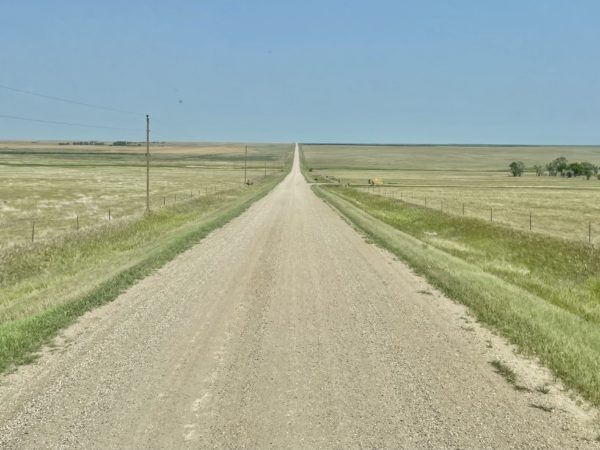 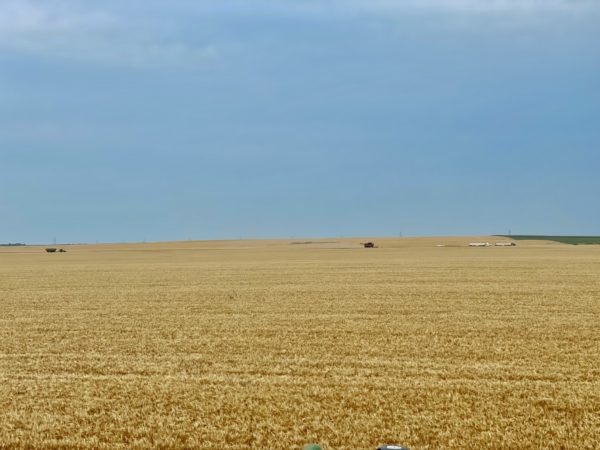 Lack of moisture has parched the prairie this summer, evident by the brown grass that dominates the countryside. With fields over 1,000 acres, sometimes equipment in the field appear as tiny dots on the horizon.

If you were expecting a plot twist for the spring wheat, you’re going to be disappointed. It wasn’t that many weeks ago a lot of farmers were questioning if there would even be any spring wheat worth harvesting. With hot weather and little rain for nearly the entire growing season, spring wheat is having some of the worst yields in recent memory. Most fields have plants only 6 to 12 inches tall, causing plenty of stress for the combine operators. The machines are able to move at very fast ground speeds because of the low yield, but it’s a challenge to keep the platforms low enough to cut off the heads without hitting the ground. There are plenty of rocks in this area to wreak havoc on sickle sections and guards, and uneven fields mean the headers are constantly having to be raised and lowered to avoid missing some grain. 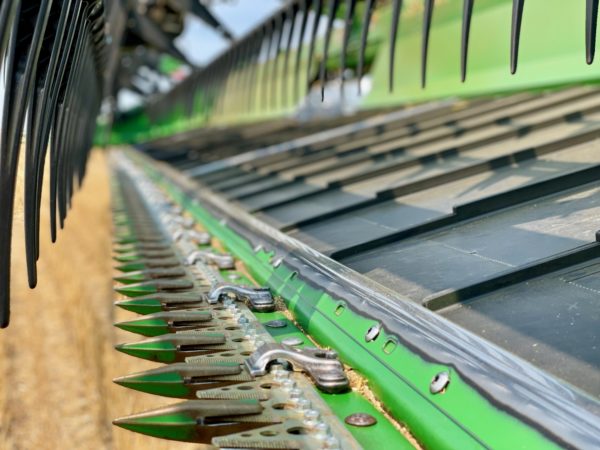 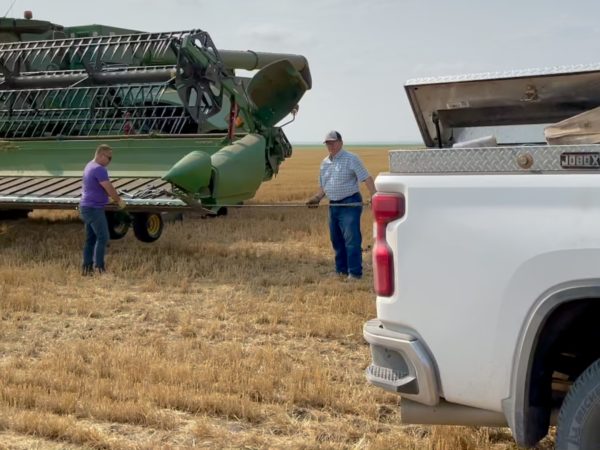 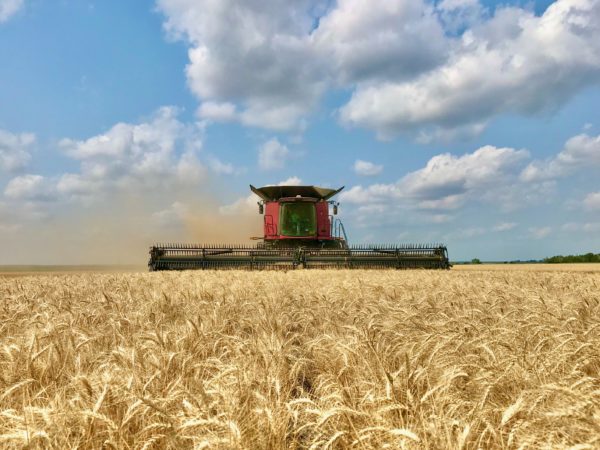 Short wheat means the combines can travel at fast ground speeds, but you can only go as fast as the header can cut. Shiny and sharp, Brian and Glen swap in a new sickle to ensure a clean cut over the thousands of acres we will harvest here.

There are some spring wheat fields in the area that have been mowed and baled for feed, with ranchers looking for something to feed their cattle in this parched prairie. Some fields have yielded in the single digits, and it’s always sobering when the yield number is lower than the moisture number on the scale ticket. This area will probably see around 15 bushel per acre on average for spring wheat. Every mile you go north it gets worse, but fortunately we have enough acres to keep us busy. Not everyone has been so lucky, and many crews are struggling to find work. With yields this low some farmers have decided not to hire harvesters at all this year in an attempt to save money. It’s hard to blame them, but for a harvester it’s a tough pill to swallow none the less. 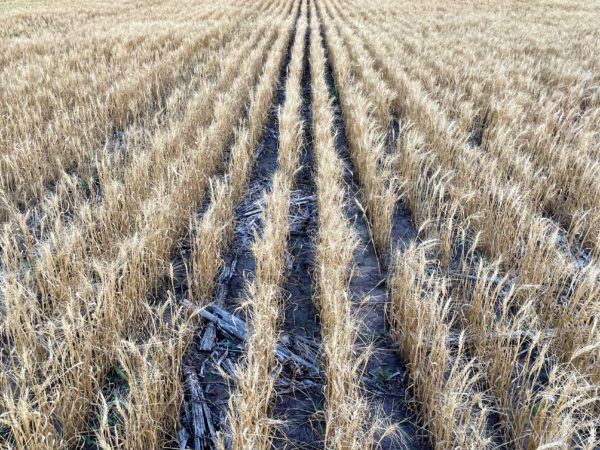 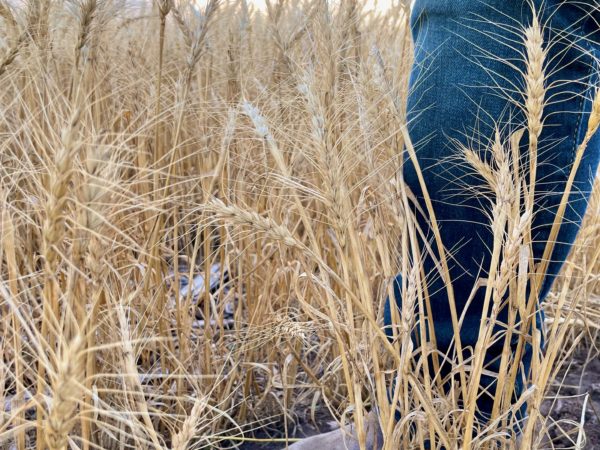 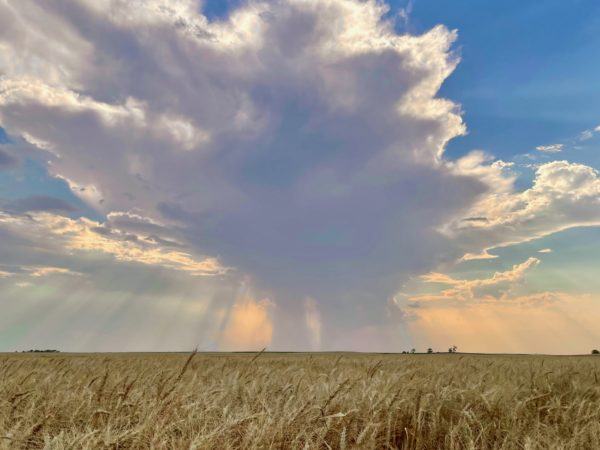 Barely boot high, the spring wheat has had a tough growing season. The yield reflects that, and the occasional random pop-up showers never provide any meaningful relief.

With the lack of work some crews are bypassing the area all together, making the trailer park a little desolate this year. Some have shown up with a fleet of combines when there is really only enough work for one or two. That’s not a great way to generate the revenue needed to pay for millions of dollars of equipment, but harvesting a few acres is better than harvesting none at all. After last years bin-busting yields, this harvest has left everyone feeling a little dismayed. With the grueling work schedule I’m not sure who wants it to rain a flood more, harvesters or farmers. I’m afraid this movie may not have a very happy ending, but it’s not over just yet. 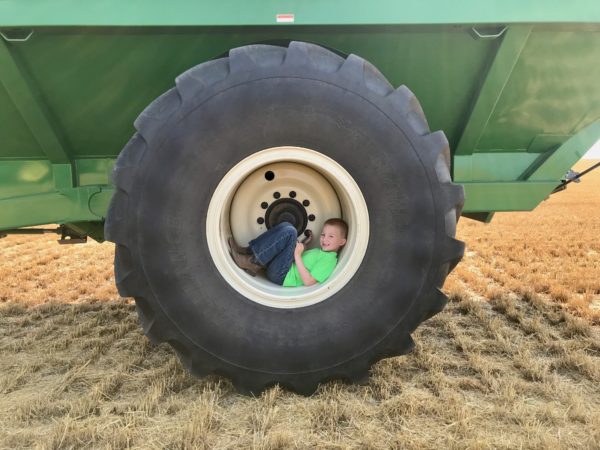 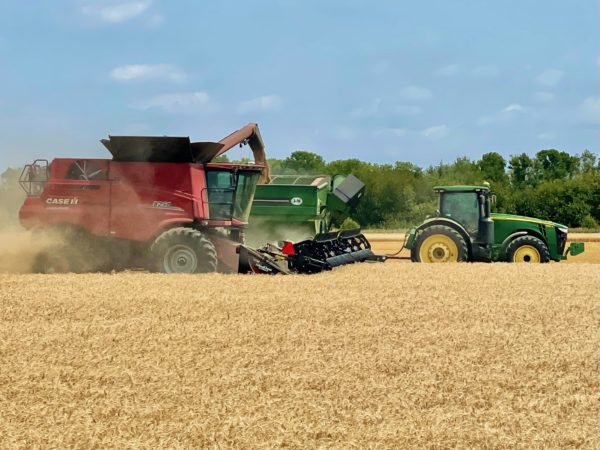 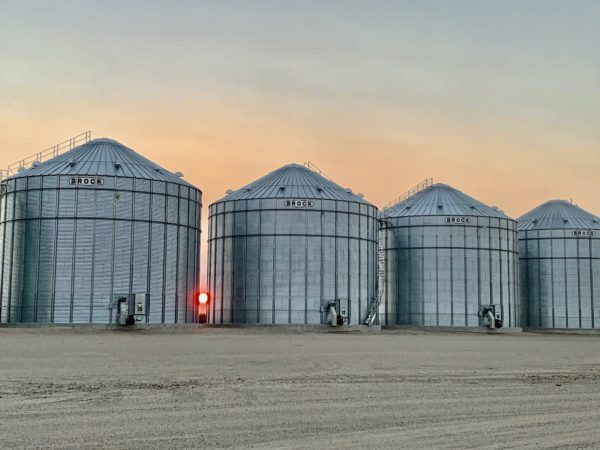 Judah insists the grain cart has monster-truck tires, and I’m not sure I disagree. The grain cart takes a lot longer to fill with the low yields, and farmers unfortunately have plenty of grain bin space this harvest.

Come to think of it, maybe this South Dakota harvest is more like your favorite super hero movie. If you just can’t get enough of all the action, you’re in luck. Oklahoma, Kansas and South Dakota have produced a harvest trilogy for you to watch. The director has cast dry weather in a starring roll. Drought has been trying to steal as much screen time as possible, but our harvesting heroes are ready to save the day. Sleep is apparently the crew’s kryptonite, but they will need super-human strength to endure eight straight weeks of exhausting work. Will the drought finally prevail, getting away with its evil plan? Will the harvesting heroes use their superpowers to win their never ending quest for slumber? If the suspense is killing you, be sure to tune in next week for the season finale. 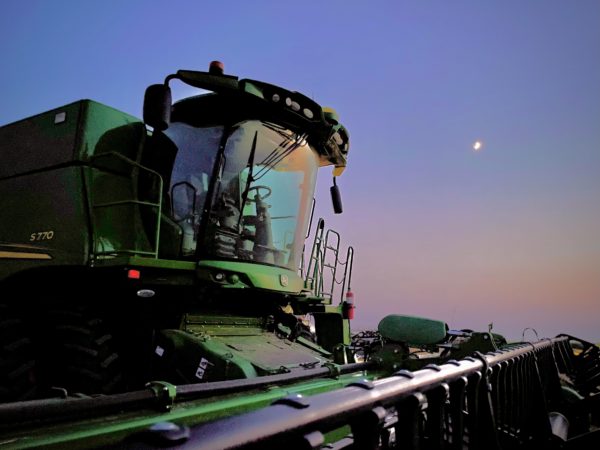 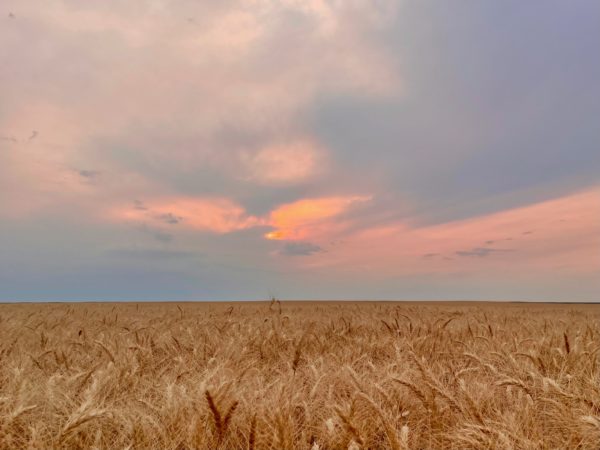 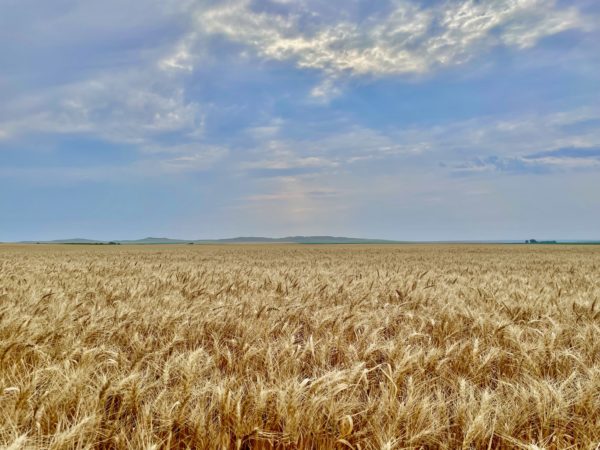 South Dakota’s big spaces and colored skies pair perfectly with the golden wheat. As night falls the light reflects off the dust-filled air to create shades of blue, pink and purple.