All Aboard Harvest | Christy: An explosive week
22869
post-template-default,single,single-post,postid-22869,single-format-standard,qode-quick-links-1.0,ajax_fade,page_not_loaded,,qode-title-hidden,qode-theme-ver-11.2,qode-theme-bridge,wpb-js-composer js-comp-ver-5.4.7,vc_responsive 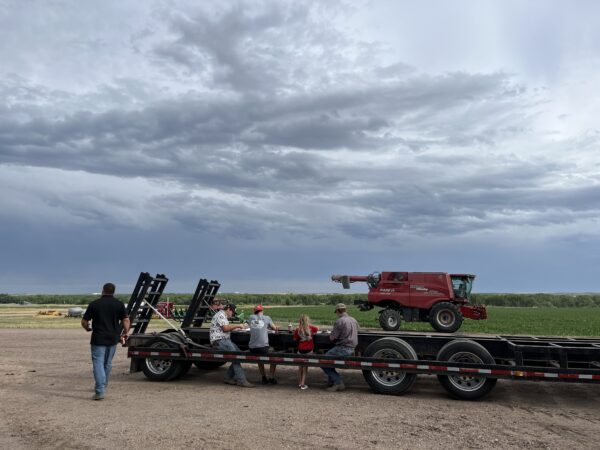 The tractor and cart trailer became our supper table when we arrived in Nebraska.

Ogallala, Nebraska—After making our stop in Tribune, Kansas, it wasn’t long before we needed to split crews in a couple different directions. Gary took a crew to Colby, Kansas, for a few days, and Paul and I left a small crew in Tribune to take a couple machines to Ogallala, Nebraska. On our way, we picked up two new Shelbourne headers in Colby to use at our Nebraska job. This will be the first job this summer that we’ve needed stripper heads. 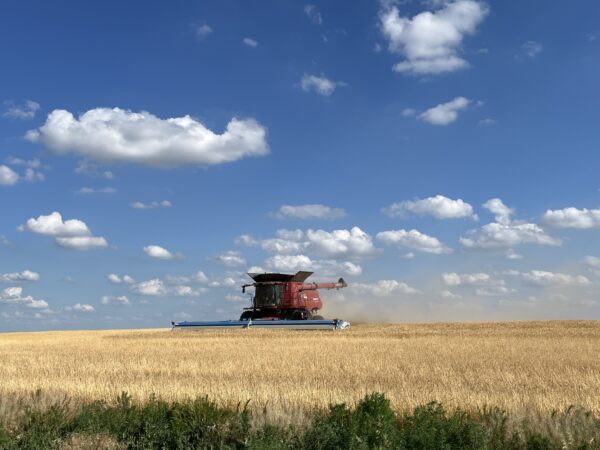 Cutting in the first field north of Ogallala, Nebraska.

The wheat in Tribune was unfortunately very poor in some spots. Overall we averaged between 15 and 20 bushels per acre. I think there was a field or two where we hit around 25 to 30 bushels per acre, but we also did a field that averaged 10. I hope western Kansas gets substantially more moisture through this year into next. They so desperately need it. I’m glad though that they saw a little rain while we were there.

Gary’s crew in Colby saw an excellent wheat crop with one job averaging about 30 bushels per acre, and one job with 50 to 75 bushel dryland wheat. That’s by far been the best wheat we’ve seen. After their quick stop there, they went on to Alma, Nebraska and will hopefully join us here in Ogallala when they get completed. Here in Nebraska the wheat we’ve been working on so far has averaged about 30 to 60 bushels per acre and would probably be a lot better if these fields didn’t catch a little freeze damage. It’s a still a great crop to cut though.

Nebraska has also been dry and hot this summer, so much so that fireworks are banned this Fourth of July. Zoey’s pretty disappointed, but hopefully she can set the ones she picked out off at the end of the year. 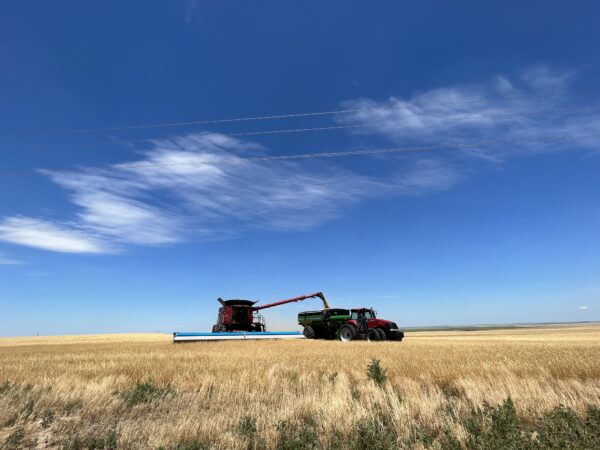 Unloading onto the cart.

After wrapping up in Tribune, the crew we left behind finally joined us yesterday. They had a bit of trouble making it, though. As they came through Imperial, Nebraska, a tire on our homemade camper blew. Hoping to make it the last 45 miles or so here, they decided to keep moving and fix it when they arrived. Unfortunately, just 18 miles away in Grant, the second tire on the passenger side blew. It blew with enough force to put a hole in the floor of the camper. 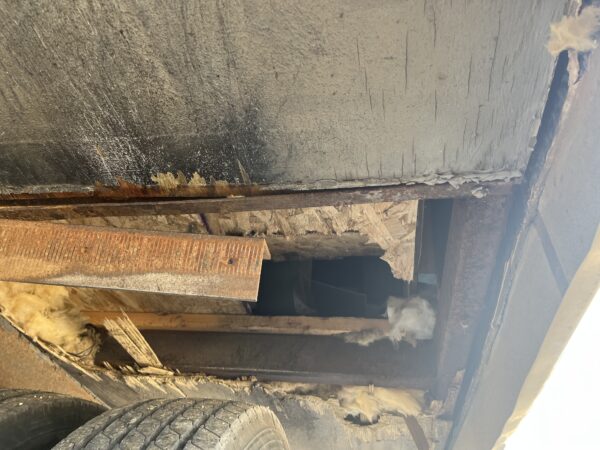 From the underside of the camper where the tire blew a hole in the floor. 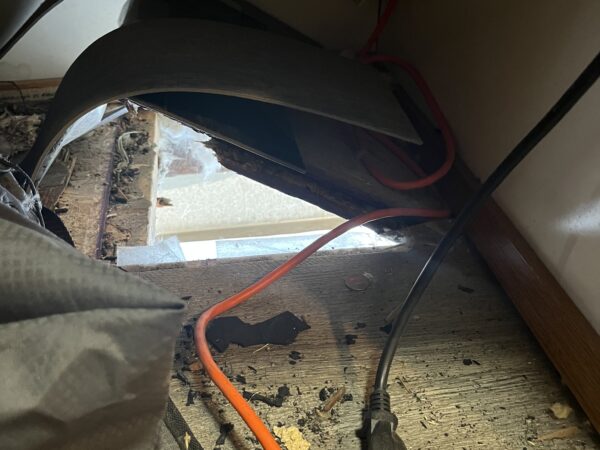 From inside the camper you can see all the debris that flew in.

If you haven’t seen the camper Gary built back in 2009, it’s built very sturdy and has been through a lot. A fire in 2016 from a faulty air conditioner gutted the inside, and it was remodeled completely before hitting the road again. It’s seen more crews than I have, and is where Paul lived before we got married and I began pulling our own camper. So in all these years, and all the tires that have probably blown on this camper, it’s hard to believe one actually blew the floor up. Thankfully it’s a problem that can be fixed, but I almost didn’t believe it until I saw it.

We’ve got a good bit of work yet to do here in Nebraska, and then we will start preparing for the move to Montana. It’s one of the biggest moves we make during the harvest season. It sounds like Montana won’t be ready until about July 20.

Hope everyone has a blessed Fourth of July. We’ll be in the wheat fields if the rain doesn’t hold us off.