All Aboard Harvest | Tracy: The Boys Are Back In Town
16723
post-template-default,single,single-post,postid-16723,single-format-standard,qode-quick-links-1.0,ajax_fade,page_not_loaded,,qode-theme-ver-11.2,qode-theme-bridge,wpb-js-composer js-comp-ver-5.4.7,vc_responsive

Tracy: The Boys Are Back In Town 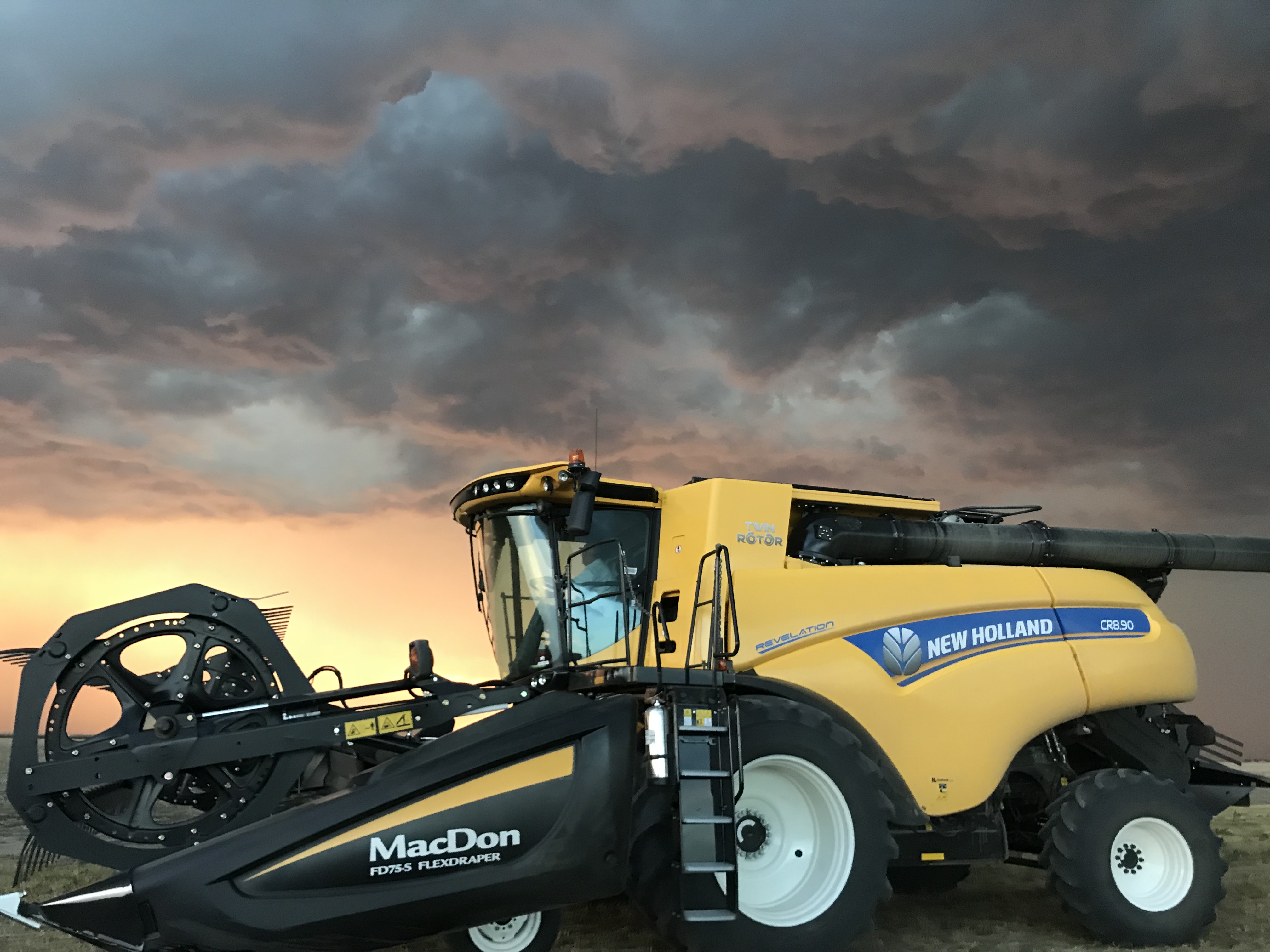 04 Jul Tracy: The Boys Are Back In Town

Garden City, Kansas – Music has a way of taking a person back to a time and a place that meant something. The song, “The Boys Are Back In Town”, was popular the summer of 1976. A time when I was a whole lot younger and never dreamed that one day I would be as old as I am now. Tunes and lyrics tend to make me a little sentimental these days! This one always meant a lot to me because it reminded me of the little towns we once pulled into during the harvest journey. I remember the days when the boys returned. I watched it from the outsider’s point of view.  The local girls worked at the elevator in hopes of meeting some of the boys of harvest. When there was time on their hands…the boys of harvest and the girls always seemed to find a reason to hang out with each other. So, when I hear this song, the lyrics make me think of those poor local boys who probably HATED seeing the wheaties roll into town again.

Guess who just got back today
Them wild-eyed boys that had been away
Haven’t changed that much to say
But man, I still think them cats are crazy

I’m not writing about the song or the boys of harvest or even harvest memories today. What I am going to write about is the return of the boys from the Oklahoma Baptist Homes for Children.

Mike Williams and I have been “chatting” back and forth for quite some time. It started before we even left home. I had such a great time with them last year, I was anxious for their return.

Good grief! Who would have known it would be so hard to make that connection. But the lack of acres in Texas was one of the biggest issues. As you can see, they come from Oklahoma – Oklahoma City, to be exact. I’m thinking Amarillo, Texas was probably much closer to visit the harvest than Garden City, Kansas was. But they came.

After quite a few emails trying to figure out when it would work best – according to our travels and the weather – we finally decided Friday, June 29 would be the best time for all. And we were going to be cutting. Mike sent a text letting me know they would arrive in Garden City about 2:00. He texted me again when they arrived and I had to let him know we were in the process of moving the combine and trucks to a different field. He reassured me that was just fine. He was going to take the boys to get ice cream – it had been a 300+ mile trip for them and 5they probably did need a break.

Mike’s van showed up at the field about an hour later – just in time for the combine to spring a massive oil leak. Seriously? I was thinking to myself, they come all the way here to see a combine sitting still doing absolutely NOTHING! We met them in the road as we were heading back to get the service truck from the previous field. Jim told Mike we had an issue and would be back shortly. When we got back to the field, they were nowhere to be found. I was feeling pretty bad about now. There were plenty of other machines running all over the countryside and I was hoping he was showing the boys some field action from the road.

They arrived just as Jim was handing me blue shop towels and showing me where to begin the cleanup process. He was going to have to make a trip to the New Holland dealership in Garden City to get an “O” ring. The stash he had in the service truck didn’t include the one he needed. Plus, he would need more oil. Mike volunteered to take him to town. This left me with four boys and Don Taylor – wondering now what the heck do we do? Don joined the travelers at the last minute. And I was hoping he hadn’t already felt like he’d made a terrible mistake in agreeing to come along. 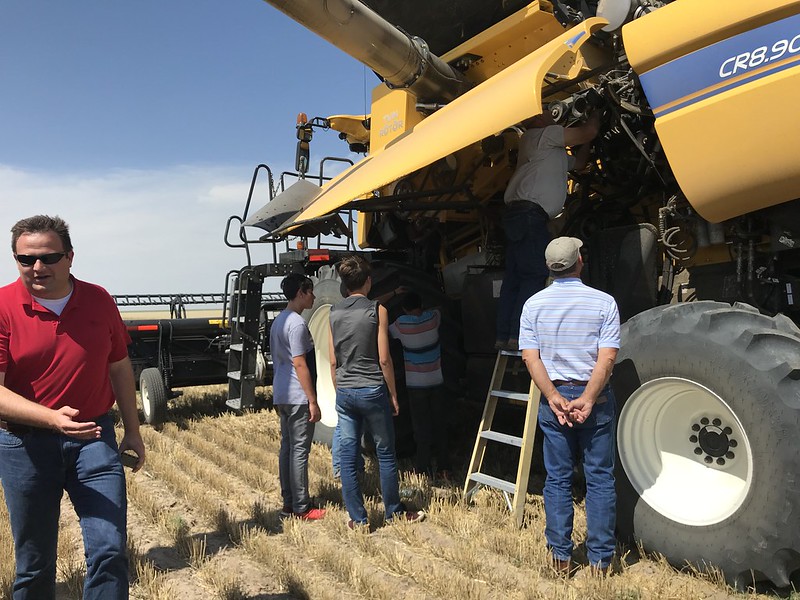 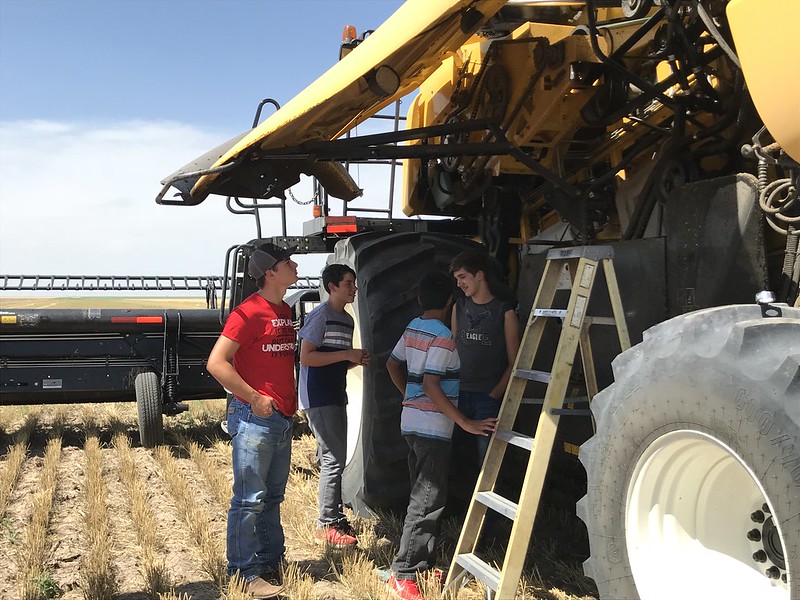 As Jim and Mike headed out the field drive, Don and I grabbed the blue towels and started cleaning. Three of the four boys set out to look The Beast over and one (Colten) grabbed a towel and started helping me and Don. Colten was a return guest from last year and it was good to see him again! He took a liking to the trucks last year and spent quite a bit of time with Jim. I saw someone who had grown up over the course of a year. And I liked what I saw. I was so impressed that a 15-year-old took it upon himself to see a job that needed done and did it.

Don, Colten and I worked on the mess the entire time Jim and Mike were away. We finally stepped back, looked at the area we had been cleaning and decided it was good enough!

When Jim and Mike returned, the leak was fixed with ease, the oil was poured and we were ready to rock ‘n’ roll once again! A good thing! The boys were hot and really wanted to ride in the combine – where it was cool! (and the Combine Cam was on) 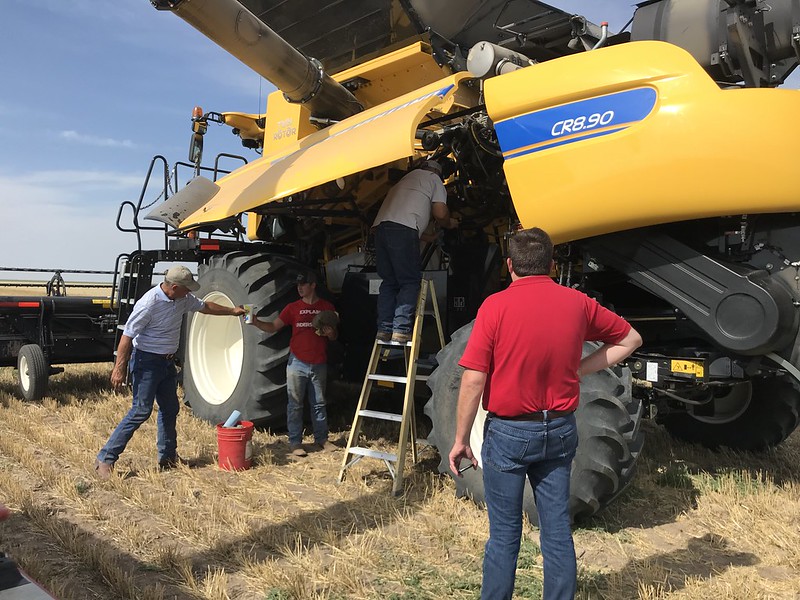 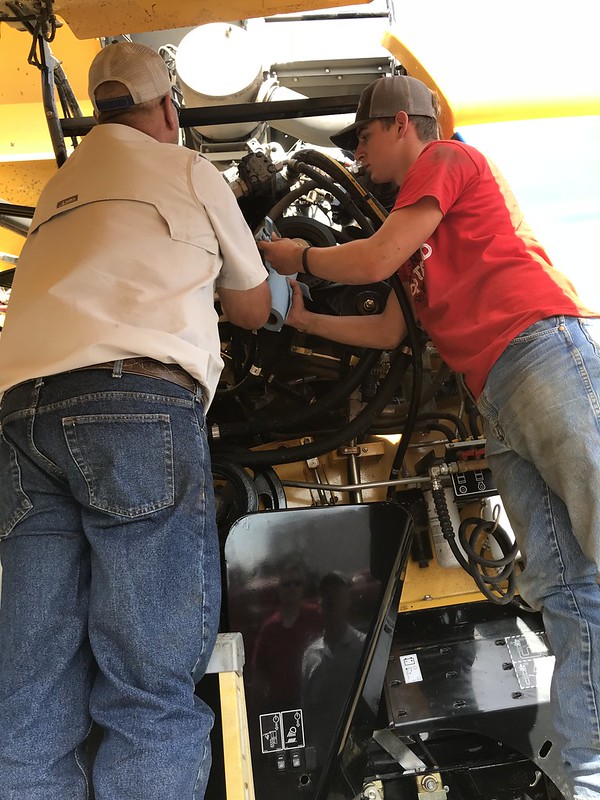 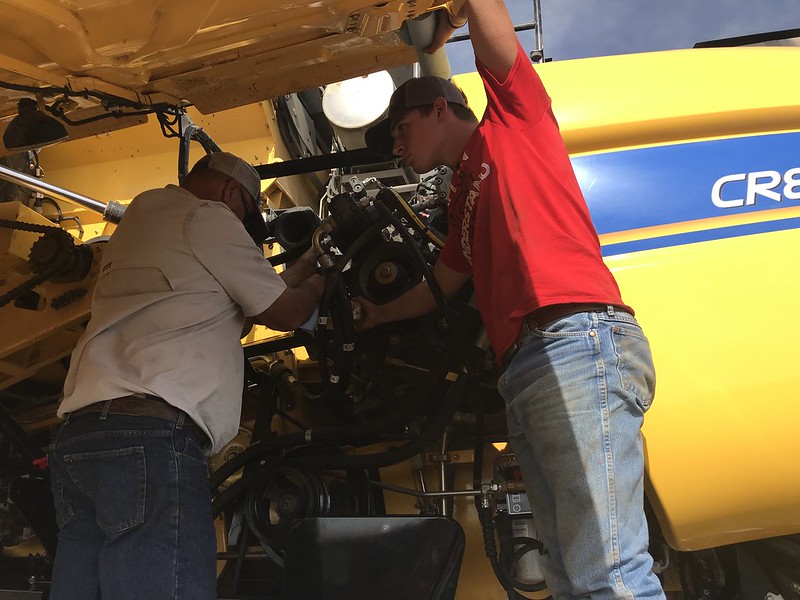 I’ve already mentioned Colten but I haven’t mentioned the others. I hope I don’t misspell their names. We also had the pleasure of meeting Josiah, Patrick and Ricardo.

Josiah is involved in the horse program at the ranch. But he really likes to work on cars, write (fiction stories and songs) and draw. I tried to convince him to write a story about his trip to the wheat field. But I didn’t get it done.

Patrick paid very close attention to details. I could tell he was a very smart kid! As a matter of fact, Josiah was telling a story how he attempted to hot-wire a radio with a cord from a clock… Patrick is involved with the Work Program.

Ricardo, who is 11 years old, had never been in a combine before – let alone a wheat field. He was very inquisitive and soaked in everything I had to tell him and show him. I am certain the few hours he spent in the country/field will be a forever memory for him! Ricardo is involved with the Horse Program.

I don’t think I knew this (or if I did, I had forgotten) about Colten – he’s a bull rider. I told him he should try to remember us when he becomes famous one day and send tickets to watch him ride. 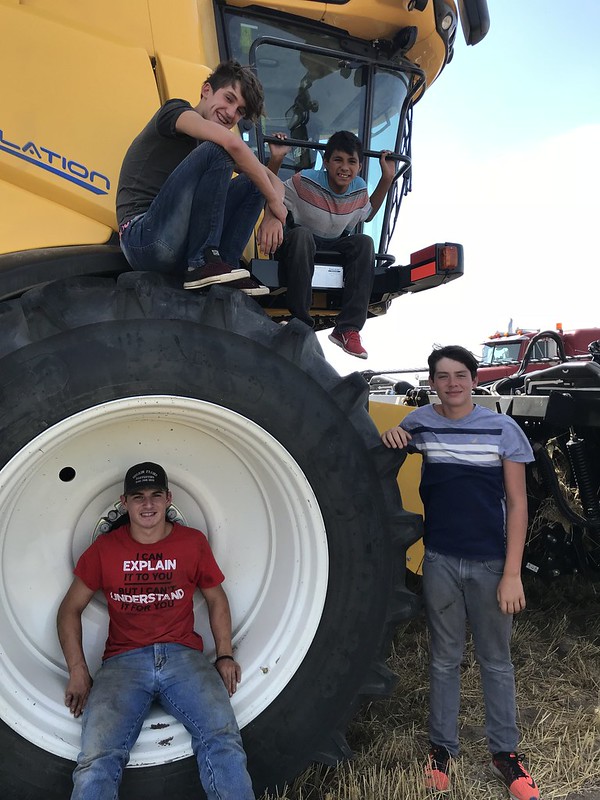 Thanks to Grant with Kiowa County Media Center, I was able to capture the time I had in the cab with the boys – except with Patrick and Colten. I didn’t have everything up and running soon enough to get Patrick on video. Colten rode with Jim in the truck and never jumped in the combine with me.

I think I probably got more out of the boys being in the field than they did being with me. I remember last year feeling this same way – wishing I could hang out with them more. I told Jim just today that I think I would enjoy working there. What a marvelous option for kids and families in need of their help and services. The following information came directly from their website:

I’d like to encourage you to visit their website. Browse through the different links and read the story of who they are and what they’re all about. I’m so very fortunate to have been allowed to be a part of these boys’ lives – if only for a short time. I honestly believe things happen for a reason and people are placed in your life at just the right time. These boys came as strangers and left as my new buds. I will probably never see them again but I can hope the time they spent with me and Jim in the wheat field will be a forever memory. And that is something I will forever hold onto!

Thank you, Mike! For helping Jim with the parts run, for being patient with all of our unknowns and, most of all, for allowing us to be a tiny part of someone’s life! You’re doing amazing things.

Oh…AND thank you for being a sponsor of the All Aboard Wheat Harvest program.

And those clouds that we were watching? Well…they provided some amazing photo ops and LOTS OF WIND! 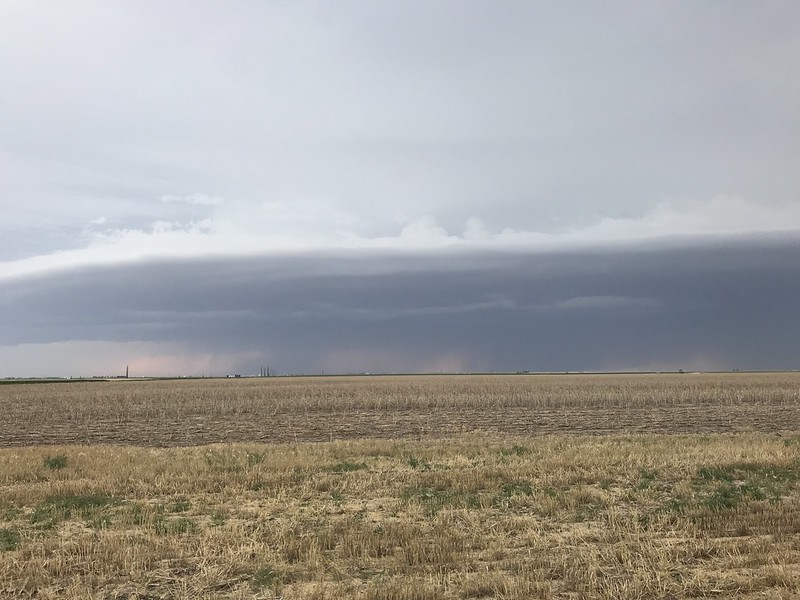 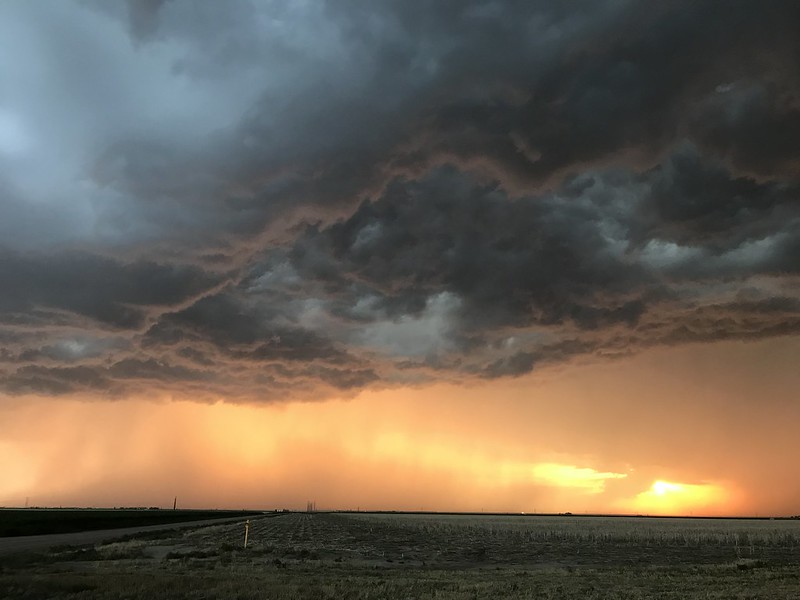 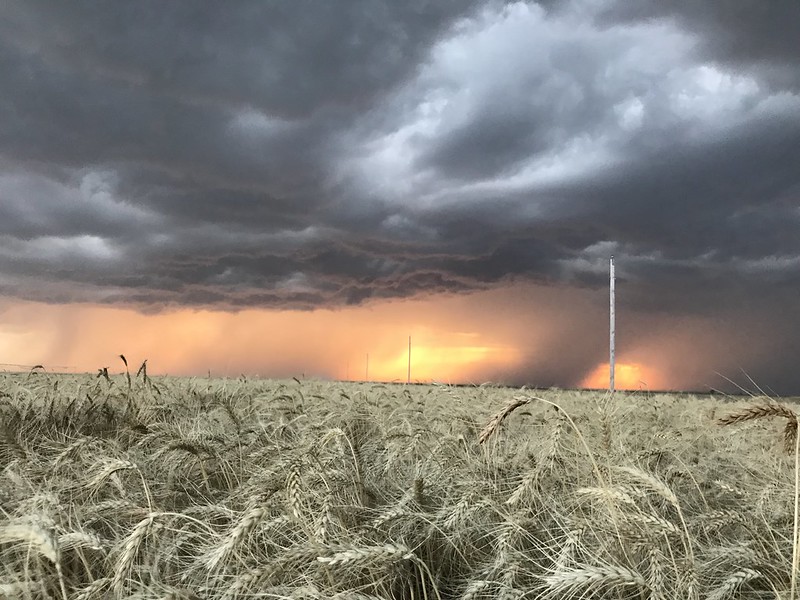 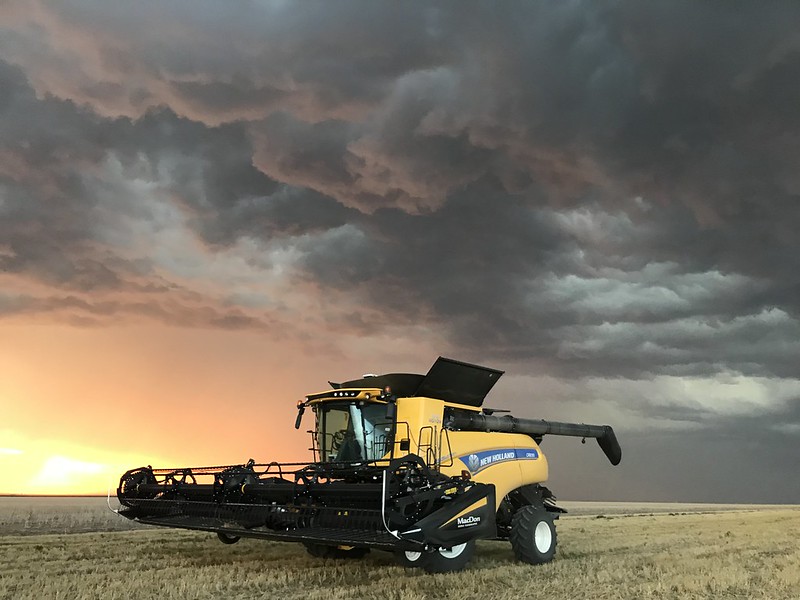 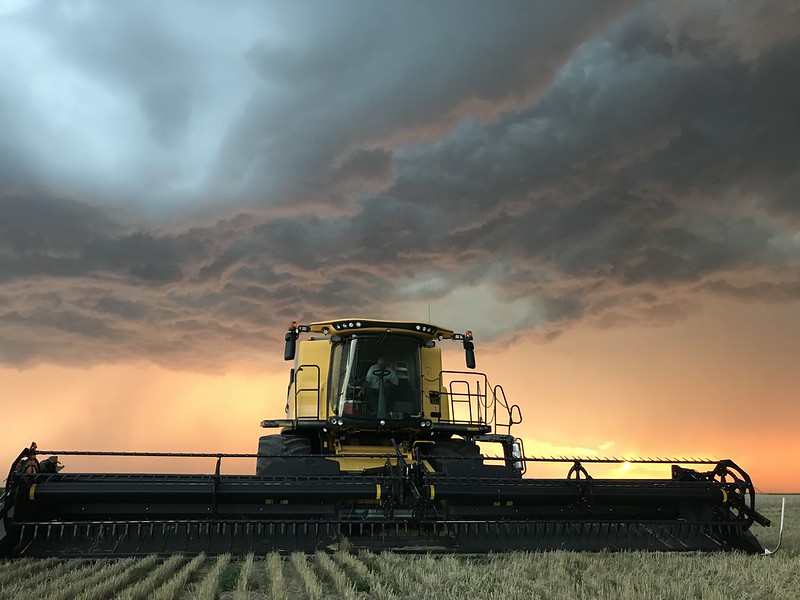