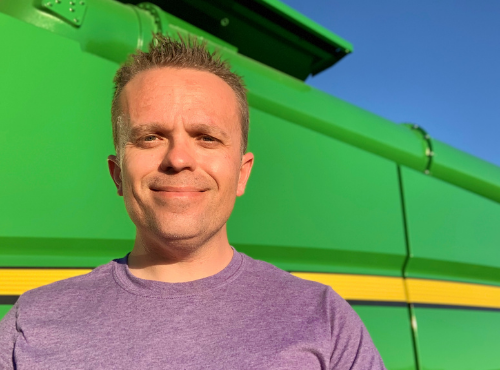 My name is Brian Jones of Greenfield, Iowa, and I am a second generation farmer and wheat harvester.  I was born and raised on a family farm about 50 miles Southwest of Des Moines in the rolling hills of Southwest Iowa.  During the tough financial times for farmers in the 1980s my father Glen Jones and grandpa George Rahn began  were looking for additional income to keep financially viable during the farm crisis.

With combines being such expensive investments we were inspired by George’s brother who ran a custom harvesting crew to load up our own equipment and head to Oklahoma.  From knocking on farmer’s doors randomly in the countryside to referrals from locals, one job lead to another that moved us northward one state at a time.  As they say, the rest is history, and the 2022 season marks the 40th anniversary of Jones Harvesting.

Our crew is completely a family operation.  Glen Jones and his wife Vernelle farm in Southwest Iowa with their son (thats me!) Brian Jones and their daughter Brenda and her husband Cameron Hamer.  Brenda and Cameron have 4 young boys, and all 9 of us spend the summer working together harvesting.  David Rahn now operates the Rahn family farm near Butterfield, Minnesota.  David joins us with his equipment each summer, continuing the Jones-Rahn Harvesting legacy.

Back in Iowa the Jones and Hamer families works together raising corn, soybean, and hay along with running a cow-calf herd.  We also do some customer farming and harvesting locally as well.  With spring planting finished and the cows turned out to pasture, we load up equipment typically early June and head to our first stop in central Oklahoma, followed by two stops is SW Kansas, Western Nebraska, Central South Dakota and Southern North Dakota.

As we begin our 40th year of harvesting the amber waves of grain on the plains, it’s hard to not look back and consider all that has changed over the years.  Yet one thing has remained the same…our love for the harvest.  It’s been quite the adventure, and we look forward to sharing our journey together with you as we celebrating our 40th anniversary together.

As Jones Harvesting celebrates our 40th anniversary of harvest, it's been hard to not be sentimental. Every wheat run year is different, defined by a handful of events unlike any other. Every single day for the past 40 years has been chronicled in a hand-written diary that now spans well over 3,000 entries. It's almost like having your own personal time machine. Some pages contain fond memories, while others recall hardships we'd rather forget. Boxes of photos tell a story filled with changes, from the size of the equipment to the size of the children

Brian: Waking up in Wonderland

Greenfield, Iowa—I woke up at 10 a.m. in my own bed this morning, one large enough to lay sideways on with a stack of pillows. That's weird. The house is silent, and I'm all alone for the first time in months. Also weird. I groggily stumble out of bed to the shower, one that is literally five times the size I'm accustomed to and has hot water that lasts 5 times as long, which is awesome but still pretty weird. I brew some coffee and look out the window, the cows grazing in the cool of

Brian: Fungus among us

Onida, South Dakota—Where do mushrooms go to get a drink? To the salad bar of course! Did you find that joke a little dull? Don't worry ... it will grow on you (like a fungus). Maybe I'm not the best comedian, but I promise you I'm still a fungi. Okay, enough with the fungus jokes or there won't be mushroom left in this week's update to tell you about the actual "fungus among us" here in South Dakota.

There's been a little hiccup in our spring wheat harvesting, all caused by a fungus you

Agar, South Dakota—When people ask me what I do for a living, sometimes it's hard to explain. It's almost like having a bunch of part-time jobs all at once. Some days I play a mechanic, fixing broken widgets with duct tape and tarp straps. Occasionally I'm an accountant calculating profit margins and running the numbers. And every so often I'm a logistics manager making sure everyone gets to the right place at the right time. But this week I find myself working in a more unusual role, one that not every harvester has much experience

Onida, South Dakota—Everyone can use some good advice from time to time. After 40 years of harvesting, we probably qualify to offer some helpful harvesting pointers. But there is always something more to learn in life, and I recently stumbled across an old saying that seemed worth sharing with you. Benjamin Franklin is well known for saying, "Early to bed and early to rise makes a man healthy, wealthy and wise." The crew maybe has not been following the "early to bed" part, but the rest of this age-old proverb rings true this week.

Onida, South Dakota—No matter where I go or what state I am in, I've been noticing a trend while traveling the harvest trail. Maybe everyone's schedule is so busy there's simply no time to take decorations down. Perhaps people are just so enthusiastic they can't help but celebrate all year long. Or maybe it’s just pure laziness. Whatever the reason, everywhere I go this summer I still find Christmas trees wrapped in garland, glinting in the summer sun. Storefronts display fake frosted windowpanes despite the excessive heat advisory just issued, and icicle lights hung from the

Onida, South Dakota—The crew always looks forward to moving to South Dakota, but getting there is always the hard part. It's the longest move of the summer, and our route takes us through the desolate Sandhills of Nebraska. The beautiful scenery is filled with wild flowers, rolling hills and grasslands that seem to stretch on forever in every directions. The famous (or infamous) Oregon Trail cuts across our path as we travel north. If you know where to squint you can still see parallel ruts that scar the hillside.


Those ruts, created by hundreds of thousands of wooden wagon

Brian: Take me out to the ball park

Big Springs, Nebraska—It's a pretty long pull from southwest Kansas up to Nebraska. With nearly 400 miles to cover, the crew has to be on the ball if we want to make it in one day. Last night we worked late loading machines in the dark, and everyone is exhausted from the heat. We finally get to bed after midnight, but it seems like the alarm clock goes off just minutes after our heads hit the pillows. Reluctantly we roll out of bed extra early, roll up the water hoses along with the electrical cords and roll down the

Plains, Kansas—The crew has finished up harvesting in Minneola, and we are eager to get moved to Plains, Kansas, as quickly as possible. This is the only time during the summer we have two jobs in such close proximity to each other. It's a lot of work to pack up the house trailers for only a 50-mile move, so we decide to commute back and forth and leave them in Minneola.
For this move we don't remove the dual tires from the John Deere combine, opting to drive it over to Plains to save time. Before I

Minneola, Kansas—The colorful dirt of Oklahoma slowly shifts its hue from red to brown every mile we draw closer to the Kansas state line. The hot afternoon sun beats down on the grasslands of southern Kansas, and the pastures look pretty parched. This area has received precious little moisture over the last year, and a quick scan of the horizon looks as if a sepia tone filter has been applied. Squint a little harder and you can see rows of white masts sprouting up in the distance, wind turbine blades spinning in the brisk Kansas breeze.