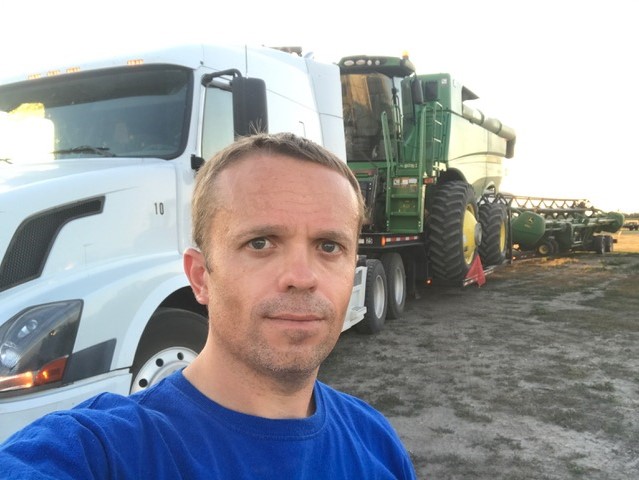 For 35 years, Jones Harvesting, based near Greenfield, Iowa, has made an annual trek from Oklahoma to North Dakota, harvesting golden fields of wheat for farmers who have become like family to the Jones family.
Brian Jones is a second generation custom harvester, having joined his parents, Glen and Vernelle Jones, his sister Brenda Hamer, her husband Cameron and their four young boys; and his uncle, David Rahn on the crew.
“I enjoy the traveling a lot,” said Brian, who said every place is different, as is every year. One thing remains constant, and that is the families for whom the Jones bring in the crop. “We have a couple of farmers we’ve worked for for 34 years,” he said.
The harvest run is like visiting family members, he added. They attend church, shop the aisles in the local grocery stores, and eat at the same restaurants each year. The Jones family has spent enough time in these communities that they feel like they belong there.
“If you add up the time we’ve spent in those individual stops, it seems like years that we’ve been there,” he said.
The Jones crew makes stops in Thomas, Oklahoma; Minneola and Sublette, Kansas; Big Springs, Nebraska; Onida, South Dakota and Strasburg, North Dakota. Strasburg, Brian points out, is the birthplace of Lawrence Welk. The crew harvests wheat on acreage that traces back to the band leader, he added.
The Joneses run a John Deere and Case combine, plus supporting equipment.
When not harvesting, the Joneses operate a 4th generation farm in Adair County, Iowa, where they raise corn, soybeans and have a cowherd. Brian is active in the Iowa Farm Bureau.

Woops, we have encountered an error. The List you are trying to use can not be found: otw-bm-list-8