Russell, Kan. – In case you haven’t noticed this summer I’ve been rather behind on posts, and to be honest, I’ve been feeling pretty crummy about it lately. Well, here is me attempting to play catch-up! Working night shift at the hospital gives me the urge to call Dad at 3 am on my off days to get the harvest scoop. For some odd reason, the crew doesn’t seem to be very receptive to my questions at that hour!

Roland Harvesting finished up in Carmen, Okla. on June 20th, but not before fighting mud everyday. Even though the area was enduring one of the worst droughts in recent memory, 6 inches of rain fell just as harvest was kicking off. More rain days during our time there delayed our combining efforts. Upon cutting the last field in Carmen it looked like we were going to be stuck in limbo, as our next planned stop in Hoxie, Kansas was still a week off. As the crew loaded up the combines, Dad received a lead about a potential job in Russell, Kansas. We headed north, and to our luck, that lead turned into a full-blown stop. Unfortunately, the rain followed us to Russell and has dampened both our production and our spirits. With the rain came many weeds, which have sprouted throughout the wheat fields. These pesky weeds cause the moisture to rise and continually plug up the sickles on the header, making our days of combining feel rather tedious.

With the concern of more rain in the forecast, many local grain elevators began taking the wheat at a higher moisture, which has allowed us to get back into the field much quicker than usual. After multiple rain days, the crew is always thrilled to be back working again. The wheat has been yielding between 20 – 25 bushels per acre, with some areas of the fields making up to 40 bushels. The test weights have been hanging right around 59 pounds but with the recent rain, they continue to drop.

Photo credit goes out to Mom and the crew! 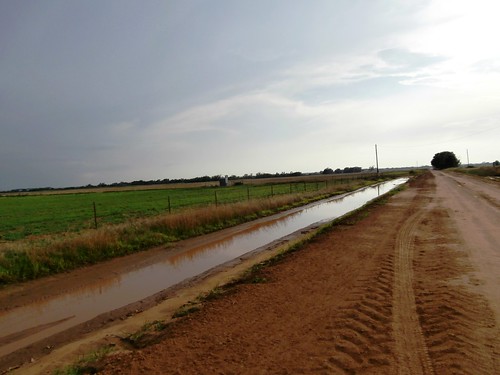 In the south the rain was too little, too late. 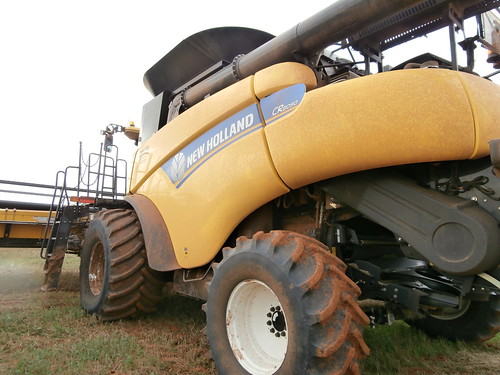 The CR’s were well-acquainted with the red dirt, or rather mud, of Oklahoma. 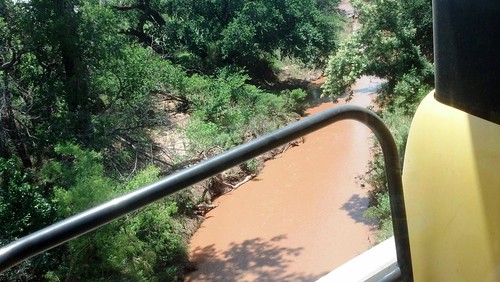 The view from Dad’s combine cab while crossing over a “rickety ol’ bridge.” All the rain has turned this dried-up creek bed into a raging little river. 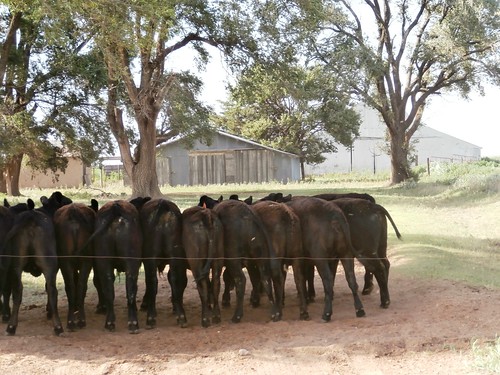 They say cattle gather together when it’s going to storm.  These calves seem to be proving that wives’ tale true… or maybe they’re just mooning the camera? 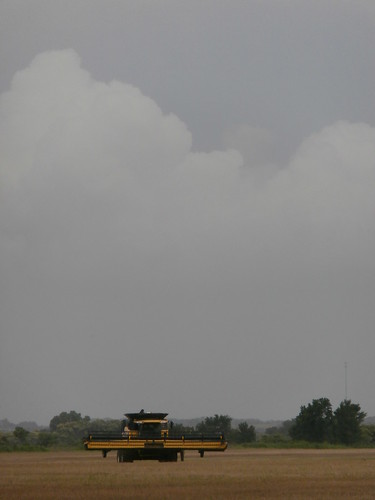 Dark clouds on the horizon prove to be a threat as the rain sets in yet again. 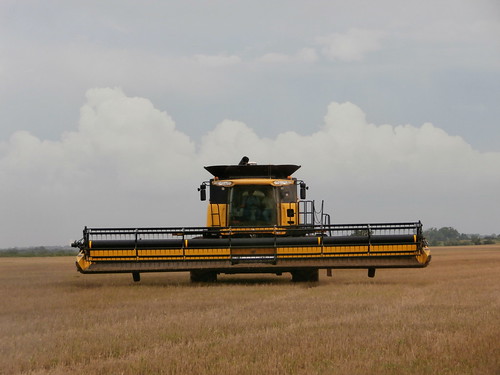 When the windshield is covered with raindrops, it’s time to call it and go unload before the grain gets too wet. 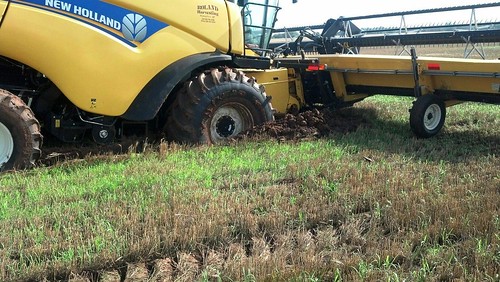 Uh-oh! A prime example of the rain aftermath. 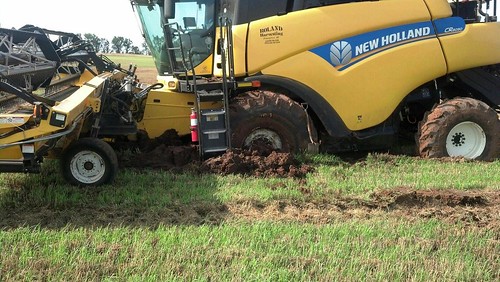 And from the other side…yep, that’s what we called buried! 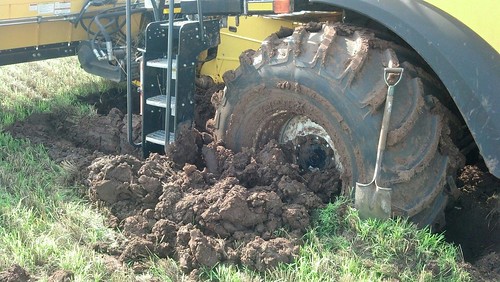 When you can’t see the bottom two steps of the ladder you know it’s bad. Time to get the shovel out and start diggin’! 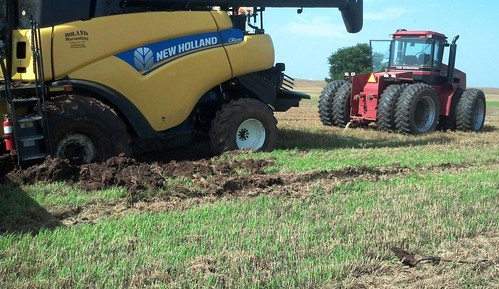 A little help from the farmer’s tractor was needed to get out this time. 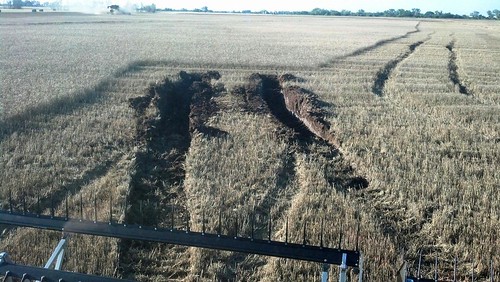 After 8 inches of rain in 14 days, mud tracks from the combines remain a common sight in the stubble. 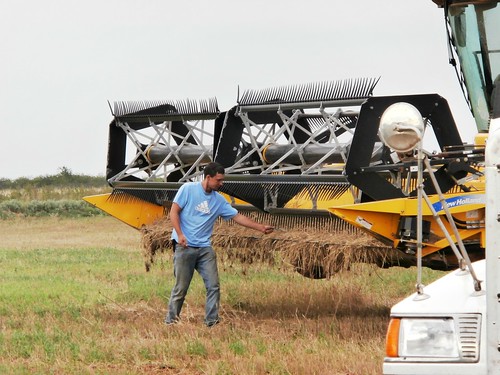 Brandon cleaning off the sickle after getting it plugged with damp wheat straw and green weeds. 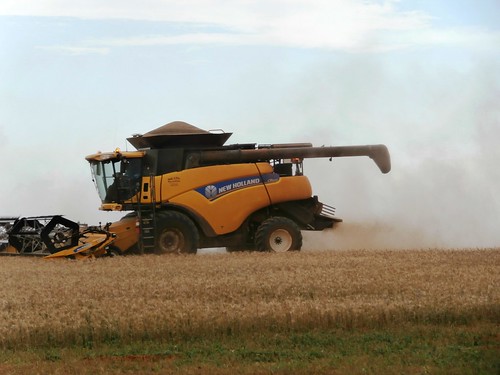 Roland Harvesting back in action in between rain days. The weeds seem to multiple overnight and make the going tough. 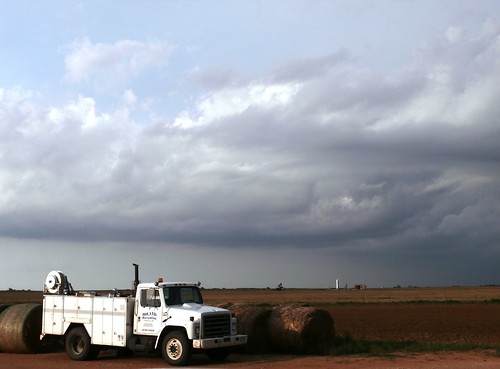 The good ol’ service truck sits nearby as more storm clouds threaten to shut us down… again.