All Aboard Harvest | The smashed flip-flop
9077
post-template-default,single,single-post,postid-9077,single-format-standard,qode-quick-links-1.0,ajax_fade,page_not_loaded,,qode-title-hidden,qode-theme-ver-11.2,qode-theme-bridge,wpb-js-composer js-comp-ver-5.4.7,vc_responsive

Shattuck, Oklahoma—I always have a really hard time titling the blog posts. I usually ask the family for help and run a few ideas past them but they shrug it off. But tonight when I asked Dad he said, “Call it The Smashed Flip-Flop!” And I told him Callie smashing her foot wasn’t a very big part of the day. He replied with, “It was a big part of Callie’s day!” And there you have it. That’s the back story to the title. If you want to know more about Callie’s day, keep reading!

I don’t know how it happened so quickly but Oklahoma has come and gone. Mom and Dad finished our last acres Monday afternoon with the help of Adams Harvesting, and it’s already time to head north. Thank goodness.

Dad gave me the heads-up on Sunday as I helped him move from one field to the other. He’d called to help me get through an intersection with the long header behind the service pickup and said, “I haven’t had a chance to talk to you girls about it, but we should be done here Monday night or sometime on Tuesday and I’ll need your help moving north.” Little did we know we were actually going to finish on Monday afternoon and get ready to head out on Tuesday.

The reason Dad went out of his way to ask for help on the move is because Callie and I will be taking a short “vacation” from our harvest duties to run back home to eastern Nebraska. Callie worked very hard over the school year on her Future Business Leaders of America projects and placed in three categories to take the projects to the FBLA National competition. She leaves Sunday (June 28) for Chicago and will return home on July 3. And then she has an all-day FBLA kick-off meeting on July 6 that she must attend because our little Callie Anne is her FBLA chapter’s president. We’re proud of her hard work and accomplishments! She has definitely earned all the recognition she receives. OK, enough of Callie… (There’s actually more about Callie in the photo section.)

Mom and I took in the last load to the Johnston Enterprises elevator here in Shattuck today and I ran in to talk to Alan, an employee who’s always in the office. He kinda runs the show, I think.

My big question for Alan was, “What are you guys doing with all of the low test weight wheat?” He discussed that they would blend it out with the higher protein wheat and average it out. There’s a high enough amount of good, middle and poor quality wheat to blend. It’s not the most desirable but there’s enough good wheat that you can blend enough of it out to average it. For the most part, Alan had a hard time saying there’s an “average” wheat crop this year but test weight is probably averaging 54 to 56 for the most part. Protein is around 12 and 13 but closer to 12. But as far as mostly good or mostly bad, he said it will be mostly decent.

Thursday was their first big day at the elevator and they haven’t been slowing down. Saturday they took in 84 trucks and yesterday a whopping 87. By the time I was in on Monday, he said it looked like another big day.

Mom and I returned to the field after our elevator trip and the combines were shutting down after a successful Oklahoma run. We got the combine and header blown off, loaded the Freightliner with all the stuff we haul from place to place and grabbed a bite to eat. Tomorrow we’ll get the combine loaded bright and early and hopefully hit the road at a decent time. Keep us in your thoughts as we head north to Garden City, Kansas, and if you see us make sure to wave hello! 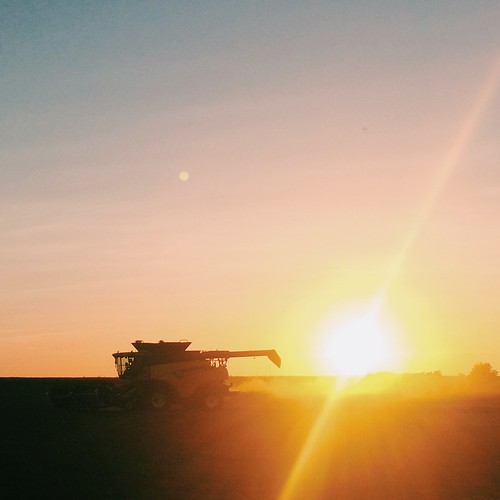 When you’re out in the field, the work doesn’t end just because the sun goes down. 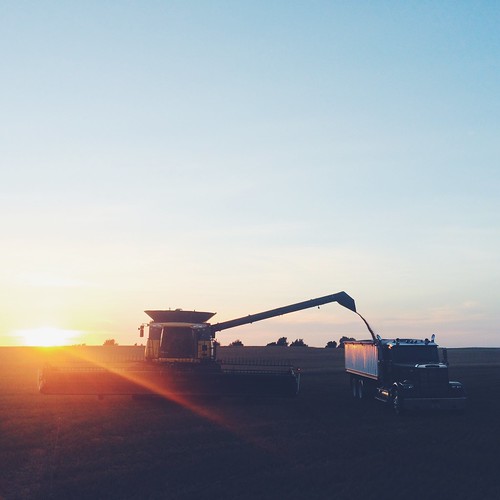 Here’s to those who work in acres, not in hours. 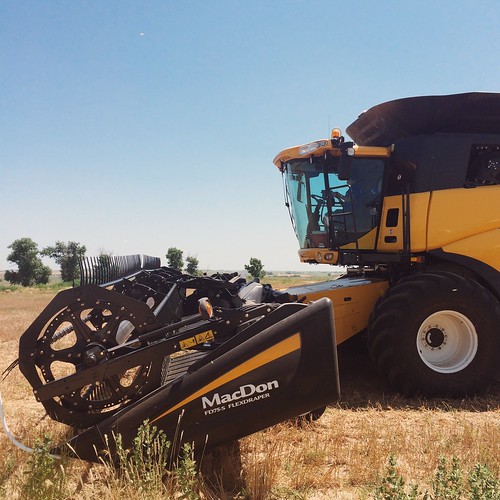 Notice the weeds? Dad said he was starting to feel more like a silage chopper than a wheat harvester—all thanks to the rain. 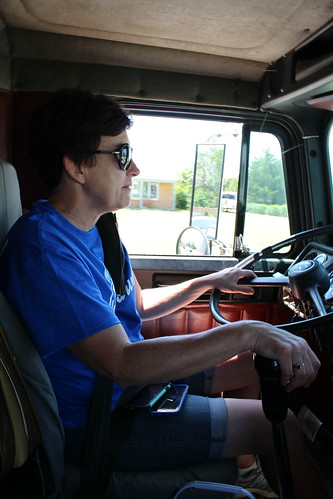 Mama Bear insisted I ride with her to the elevator. She really enjoys my company. 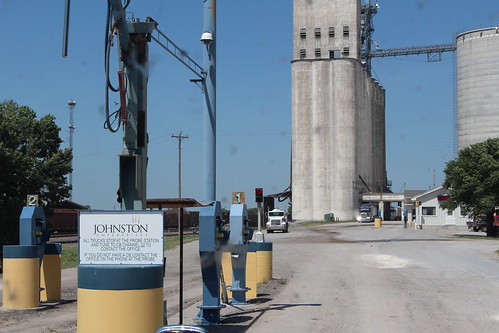 First step at the elevator: stop under the probe for the office to sample. 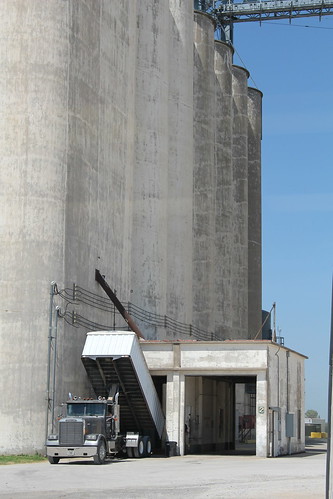 While Mom stopped the truck on the scale to be weighed, I jumped into the office. I took this picture of Frank unloading from the window. 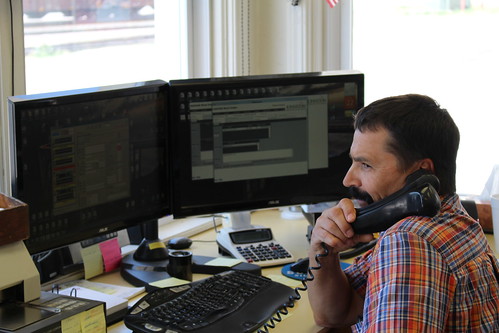 The man of the hour, Alan. Not only was he helpful and full of information, he was just really nice. 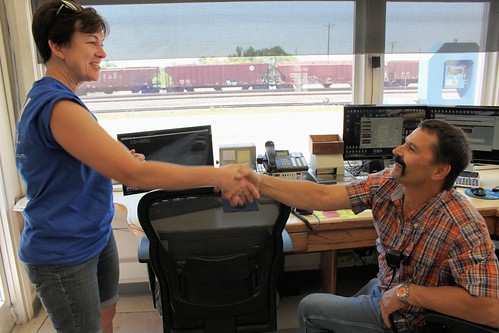 After Mom was done unloading Frank, she stopped back on the scale for the final weighing. She ran into the office to say a final good-bye and thank you. 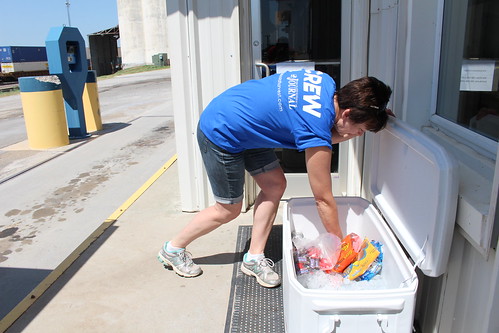 Mom raved about this cooler. It’s not very often elevators sit a cooler outside of the office full of goodies. 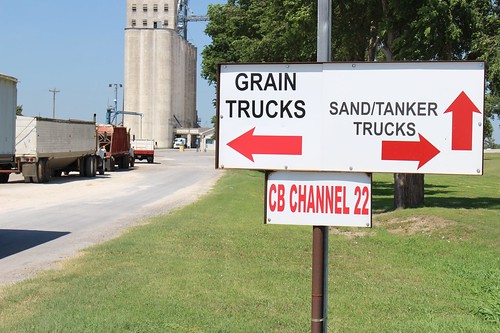 Something you don’t see every day. The Shattuck elevator is in the middle of oil country. Two of their large bins hold sand for fracking! 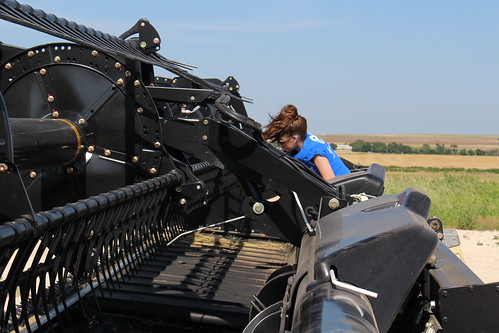 The story behind the blog title: Callie Anne, bless her heart, dropped a big piece of metal on her flip-flopped foot today but she kept on working. She’s worried it may be broken, but gosh darn it, she had work to get done. Above, she’s blowing chaff, dirt, weeds and sand off the combine header. 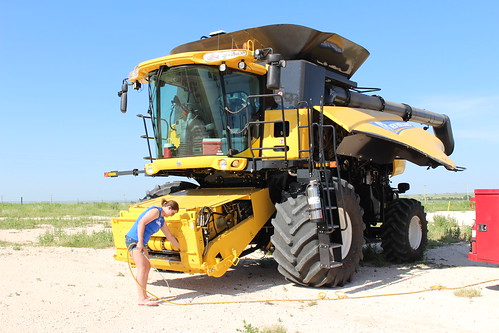 And me! There aren’t many photos of me on the blog but Callie snapped a couple while I blew off the combine.