All Aboard Harvest | Sometimes you’re the windshield, sometimes you’re the bug
9472
post-template-default,single,single-post,postid-9472,single-format-standard,qode-quick-links-1.0,ajax_fade,page_not_loaded,,qode-title-hidden,qode-theme-ver-11.2,qode-theme-bridge,wpb-js-composer js-comp-ver-5.4.7,vc_responsive

Brush, Colorado—I’m back to using song lyrics themes for my posts. This one, from “The Bug” by Mary Chapin Carpenter, is quite appropriate as it feels like we’ve been more bug lately than windshield, but that is starting to turn around. Let’s back up a few days so you can be updated on what’s been happening.

I reported last week that it was a hurry up and wait game. Sometimes the crew can start getting cabin fever when we experience weather delays. One crew member flew home for a three-day weekend and returned Tuesday morning. This would be fine, except weather conditions can change with no warning and suddenly we’re back cutting.  On Friday, a crew member gave 24 hours’ notice before leaving for home, with no plans to return. We lost another crew member several weeks ago due to the fact he received the opportunity for a permanent position back home near family and friends. We couldn’t blame him for pursuing that, but we only had about 36 hours’ notice. In addition, another crew member, unfortunately, has been dealing with physical ailment from an accident lifting something at work. He’s the go getter type, so he’s kind of guy you basically have to force to take it easy; we want him to heal up and not experience re-injury.

Talk about stress. Actually, it’s an intense form of Alzheimer’s prevention (runs in the family) through brain exercises of creative thinking and problem solving. No, it’s not funny at all, but if you don’t try to find something positive in all the ups and downs of this business, you just might cry—a lot. Sometimes harvest/crew life isn’t for everyone, different opportunities arise, homesickness sets in, there are family/friend issues, etc.   Some things in life just can’t be prevented or anticipated, that’s life, and we get that.  However, with even a little notice, we can generally work it to get someone lined up to help fill in, if only temporarily until a more permanent solution can be found. Another problem is the training. There is a lot of time and monetary investment that goes into training a crew. At this time of year, can the new person hit the ground running? Do they have a CDL? It would be one thing if vacancies in the crew just affected Ryan and me. However, that’s not the case when you operate a time-sensitive business that serves those depending on you to harvest their livelihood in a timely fashion. That knowledge is the part that makes these challenges really, really tough to swallow. 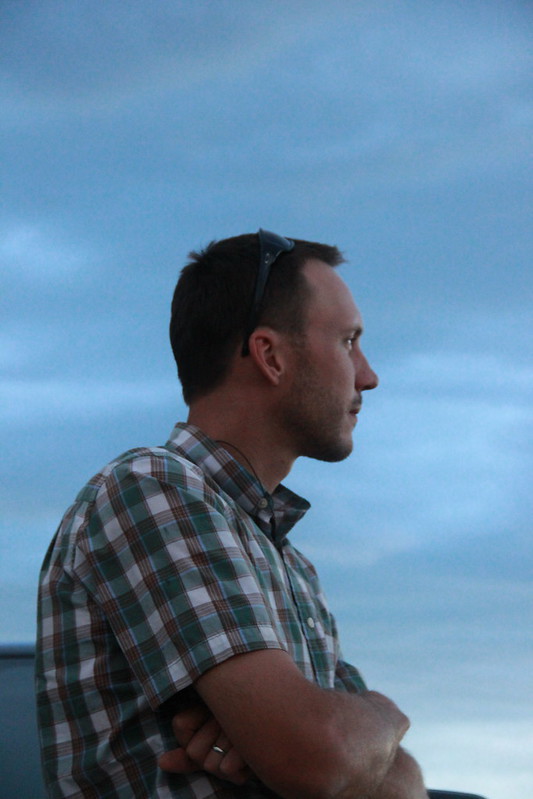 I secretly snapped this picture last week as he watched the clouds.  Wheels were clearly turning in his mind. 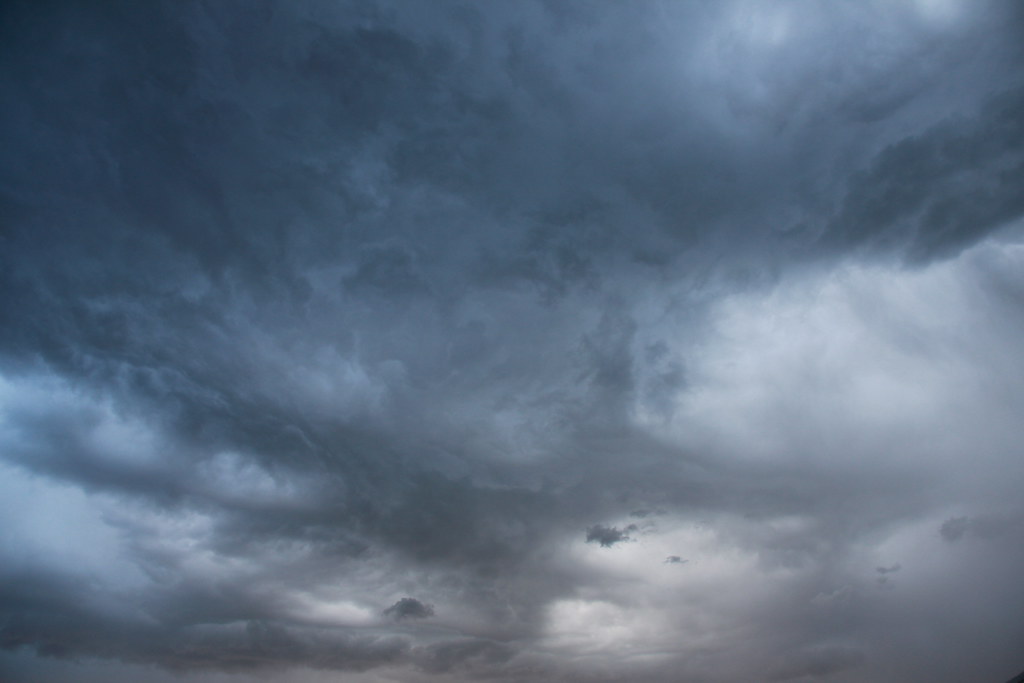 Another storms rolls in.

As luck would have it, the conditions were finally right for the crew with Mark to start cutting Saturday.  Here, we expected a long weekend.  We had not anticipated starting until Monday since we understood the elevator to remain closed because the wheat was still a little green. However, hot, breezy conditions put the dry down in hyper mode, and the elevator was open after all, so we were able to start cutting on Sunday. 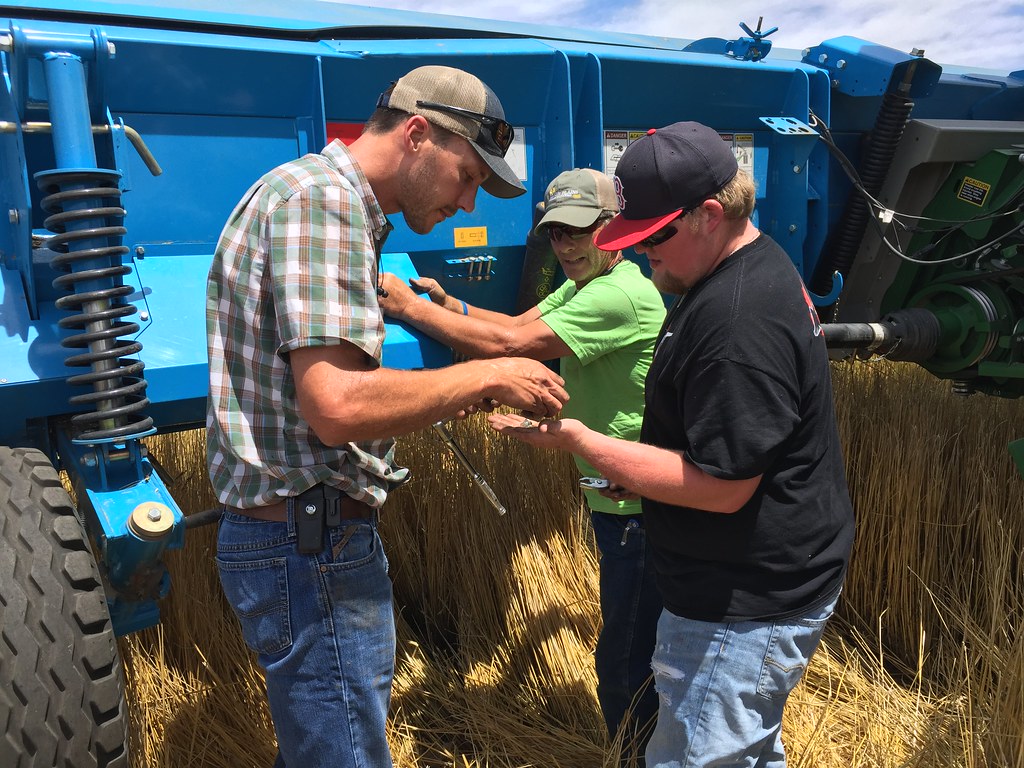 A little teamwork between Kirby, Michael, and Ryan helps make quick work of replacing a bolt that was sheared off.

Enough of the “bug” talk. There have been some “windshield” moments in all of this too. So, what is a crew to do? We all pulled up our bootstraps and did what needed to be done and where. I can’t say enough about the positive attitudes of the crew who have continued to fulfill their commitments. We had to play musical chairs with some crew members to fill spots where the need was greatest. Also, a good friend came out to fill in for a couple of days (second time this year). Little Man and I were even called into active duty and operated the grain cart Sunday while waiting for reinforcements to arrive reliving us from field duty Monday. It’s one thing for a toddler to go to the field to ride with the option to leave; however, to have to stay in the field is another. What a trooper he was. A new crew member was found quickly and added to the crew currently working with Mark, and we have another person who’s driving today out to start at the Brush location. It’s working out, and machines have been able to keep running despite all the changes and challenges. 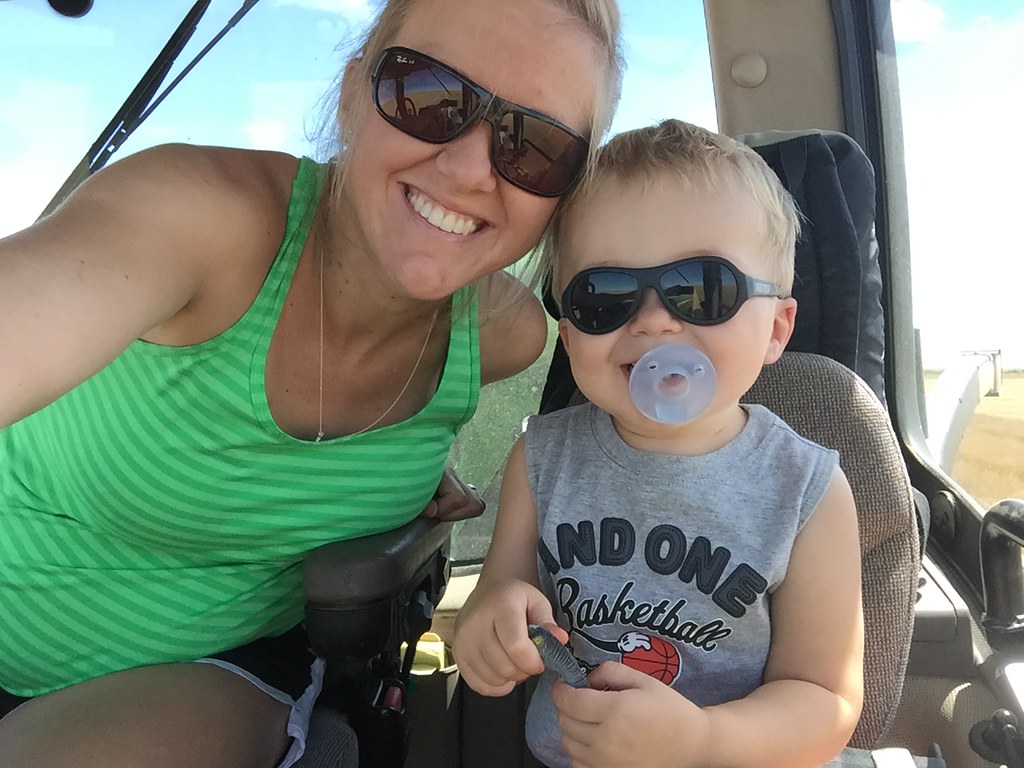 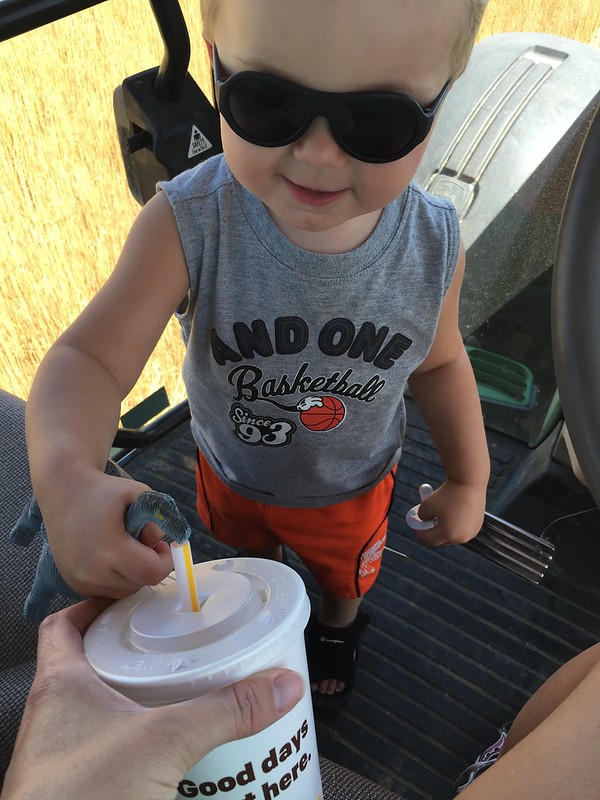 Its HOT out there, folks!  Even dinosaurs need to stay hydrated with tea. 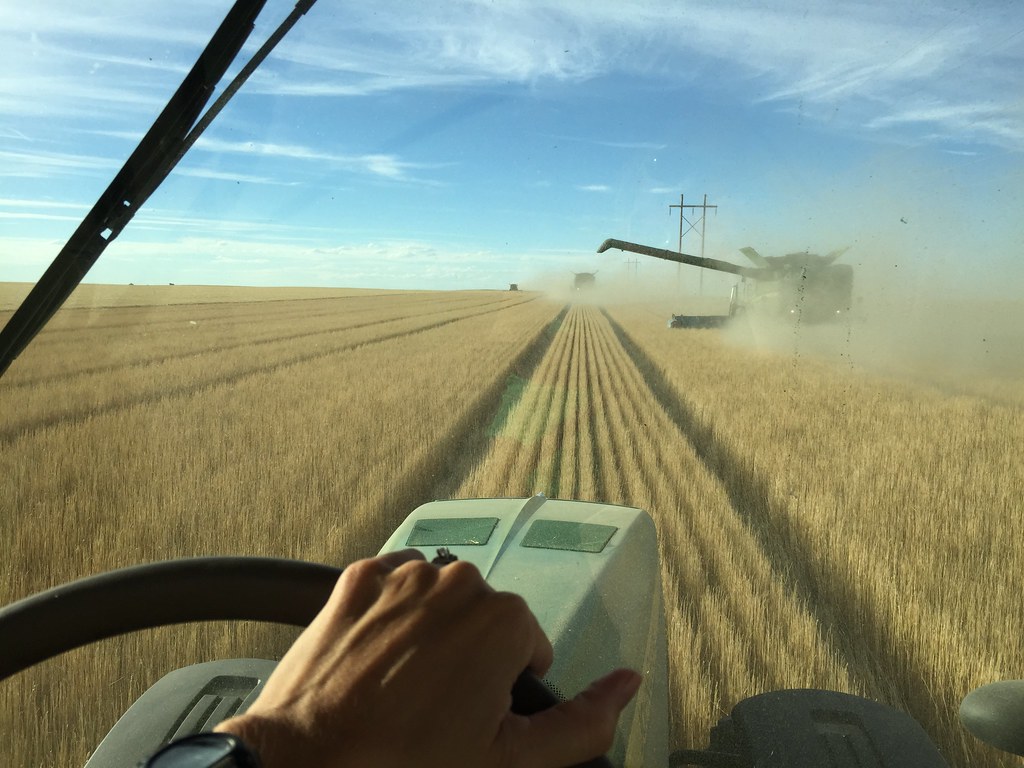 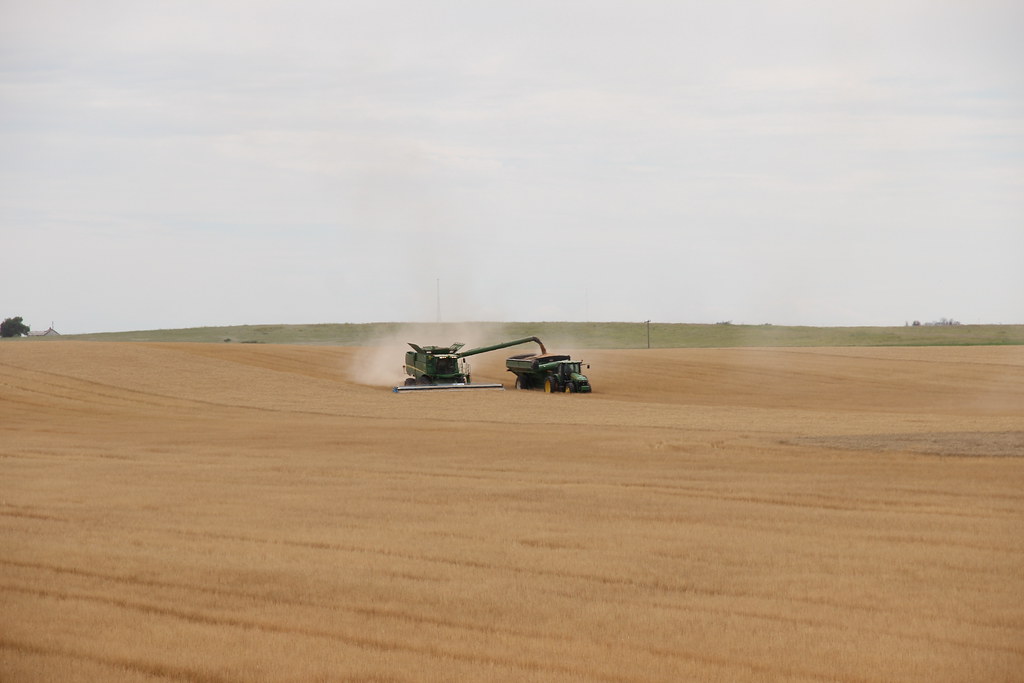 The country south of Brush is just beautiful and cutting is a dream. The wheat is doing well, especially considering it had a tough spring with a late freeze and rust pressure. I will report more details in my next posts.

Isn’t that a beautiful stand of wheat? What about that weed control?