Claude, Texas –
“Who needs a house up on a hill
When you can have one on four weels
And take it anywhere the wind might blow?
You don’t ever have to mow the yard
Just hang a map and throw a dart
And pray to God the engine starts and go”
Kacey Musgraves – “My House”

Trailer house livin…you either love it or hate it. I happen to be on the side of lovin it.

We made it to Claude, Texas on Friday evening. The trailer court we were told to go to was a super place to land. It was flat and didn’t cause us much trouble for getting the Cottage set up for a lengthy stay. However, one situation that made my insides fill with anxiety was the fact there was no sewer hookup. This would mean a little effort on our part. One that we had never had to deal with on harvest before. But, our intentions were to go to Amarillo and purchase a cart to dump the holding tank in. An inconvenience but we would get through it. 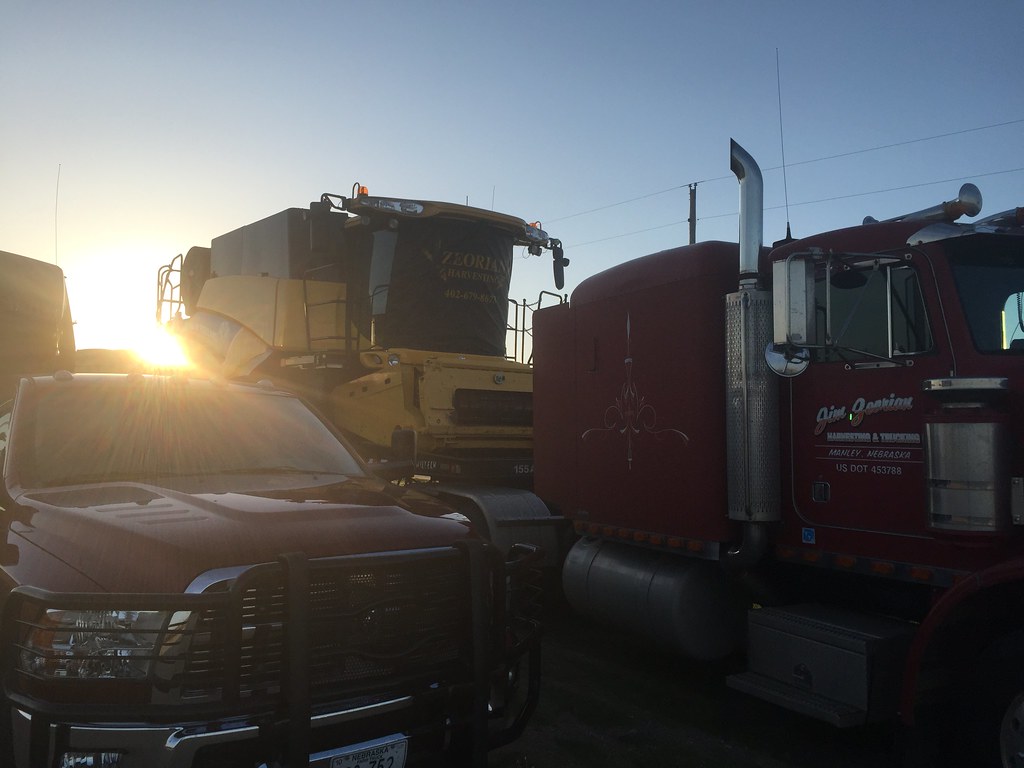 Hotel Pete – Our first night on the road was in Hays, KS. We both opted to just sleep in the Pete rather than move all the stuff off of the bed in the trailer. 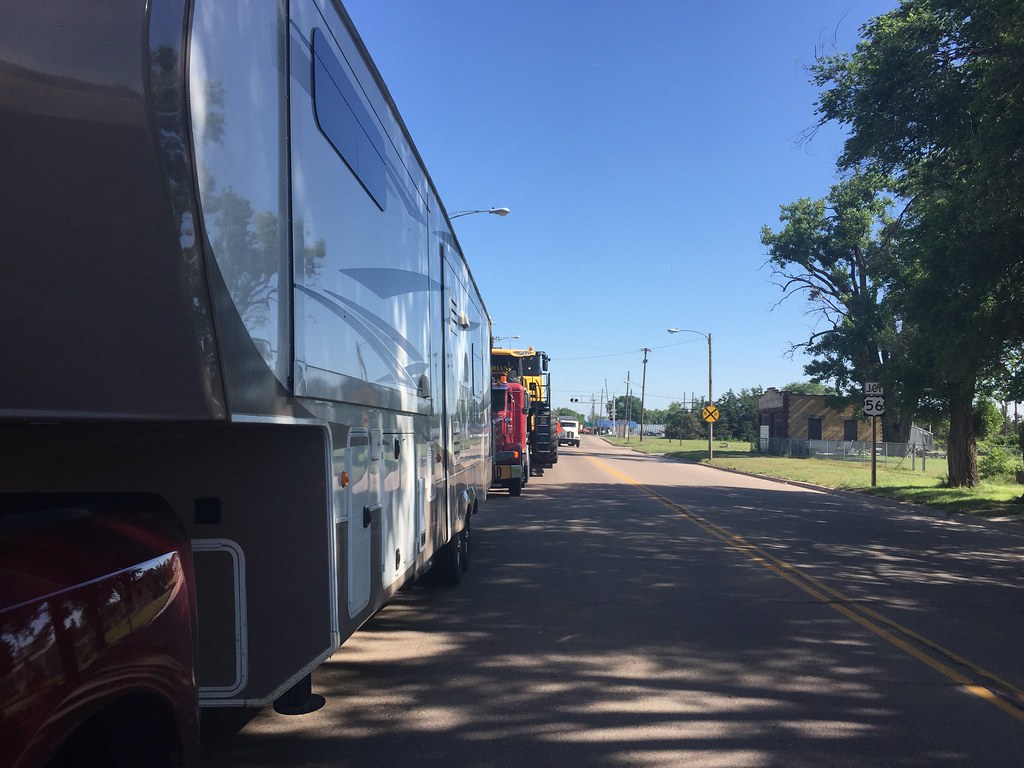 One of several pit stops along the road. 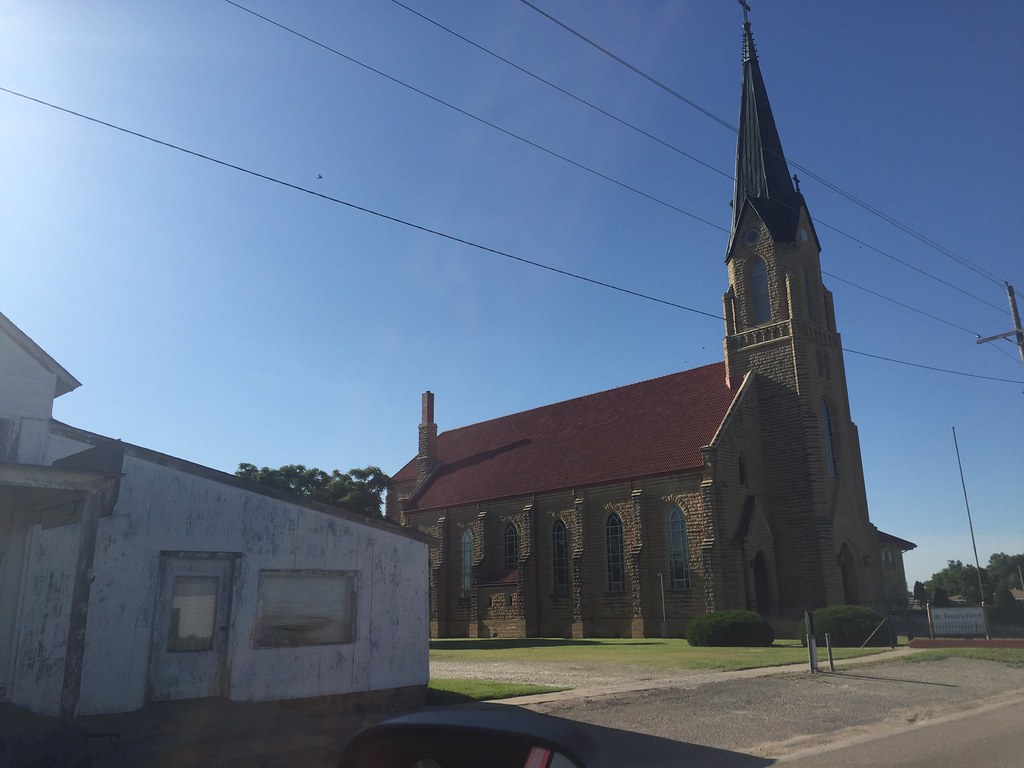 One of our favorite harvest sights – Liebenthal, Kansas church built with post rock. 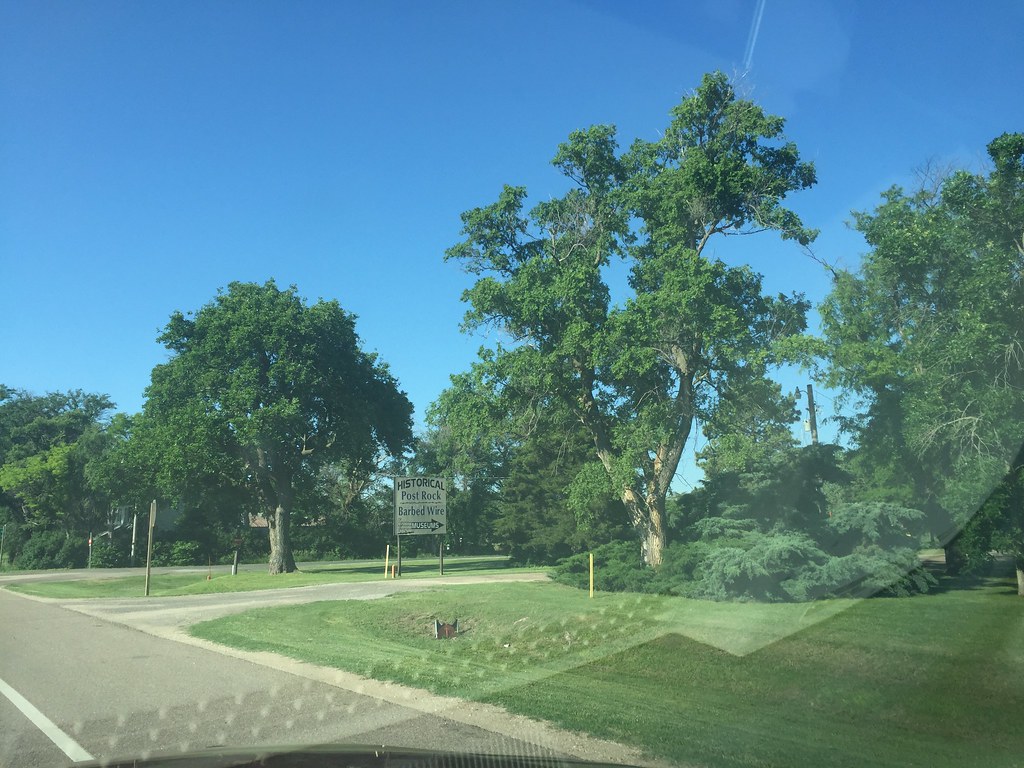 I always intended on getting the kids to this museum. It didn’t happen. Maybe one day, the girls and I will have to take a “Let’s visit old harvest towns” trip. I’ll be sure to add this one to the list of must see. 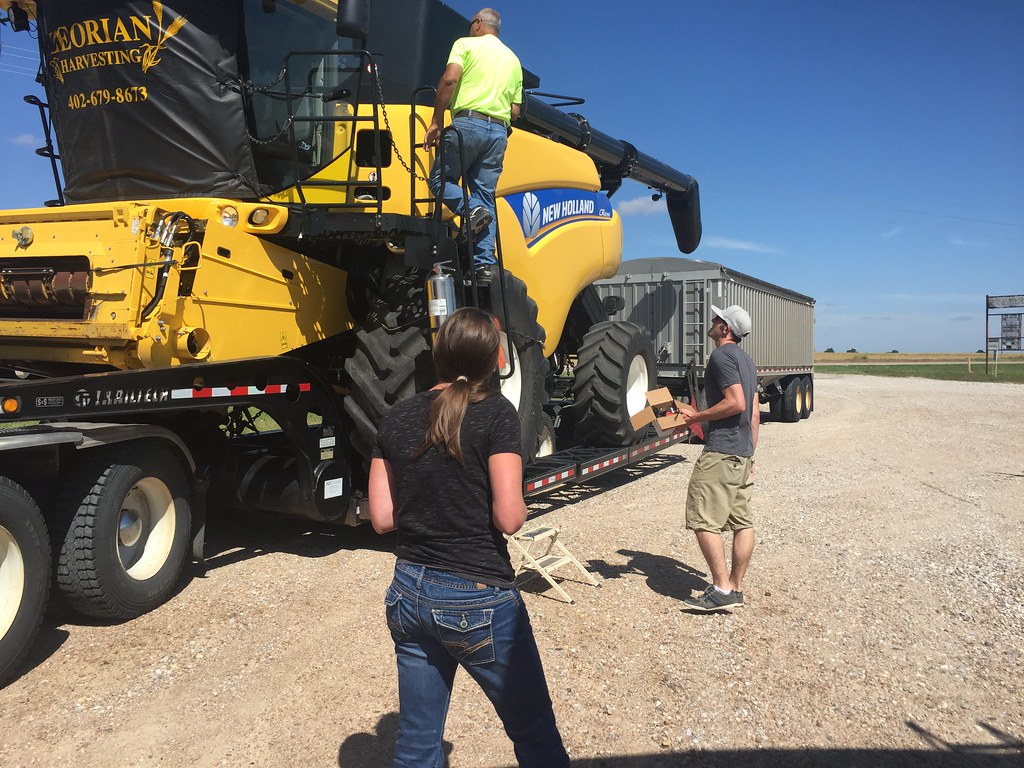 A stop outside of Greensburg, Kansas was necessary for Grant and Cassie from Kiowa County Media Center to install the Combine Cam. 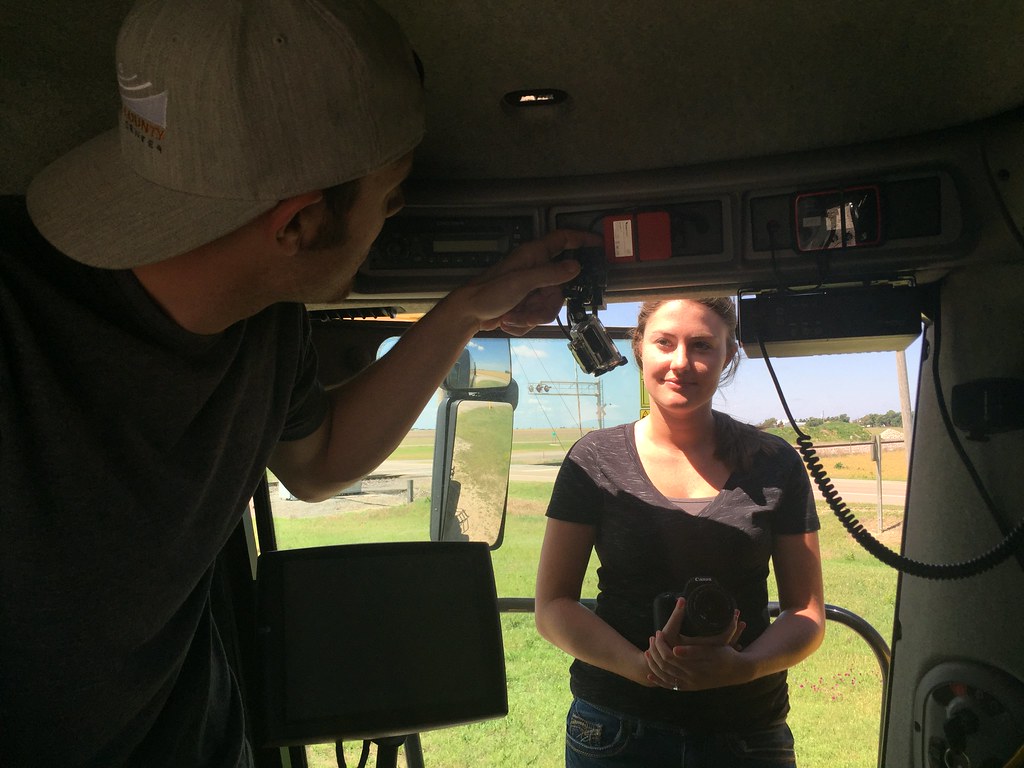 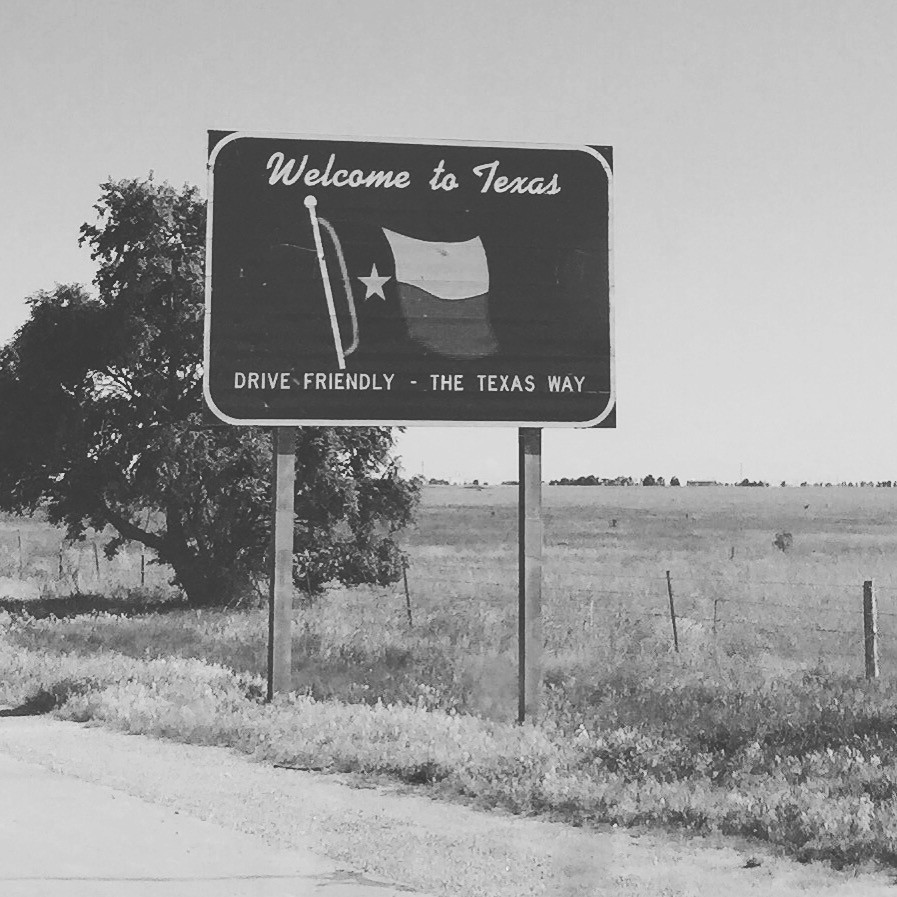 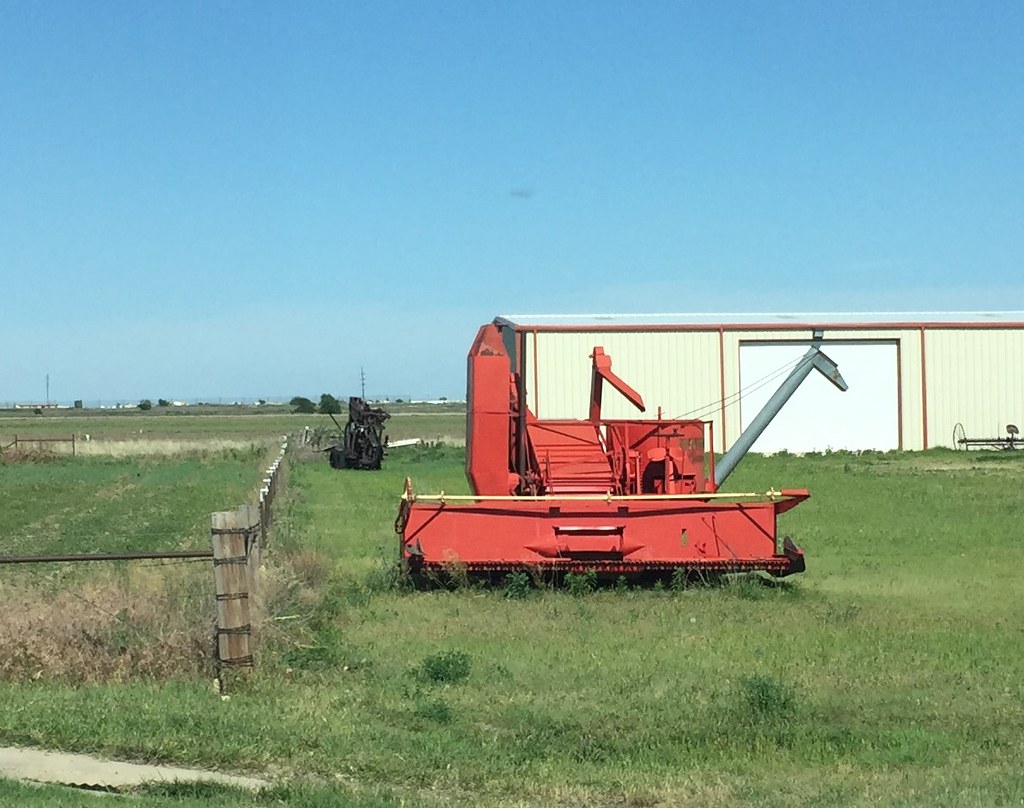 A fun sight to see outside of Pampa, TX. 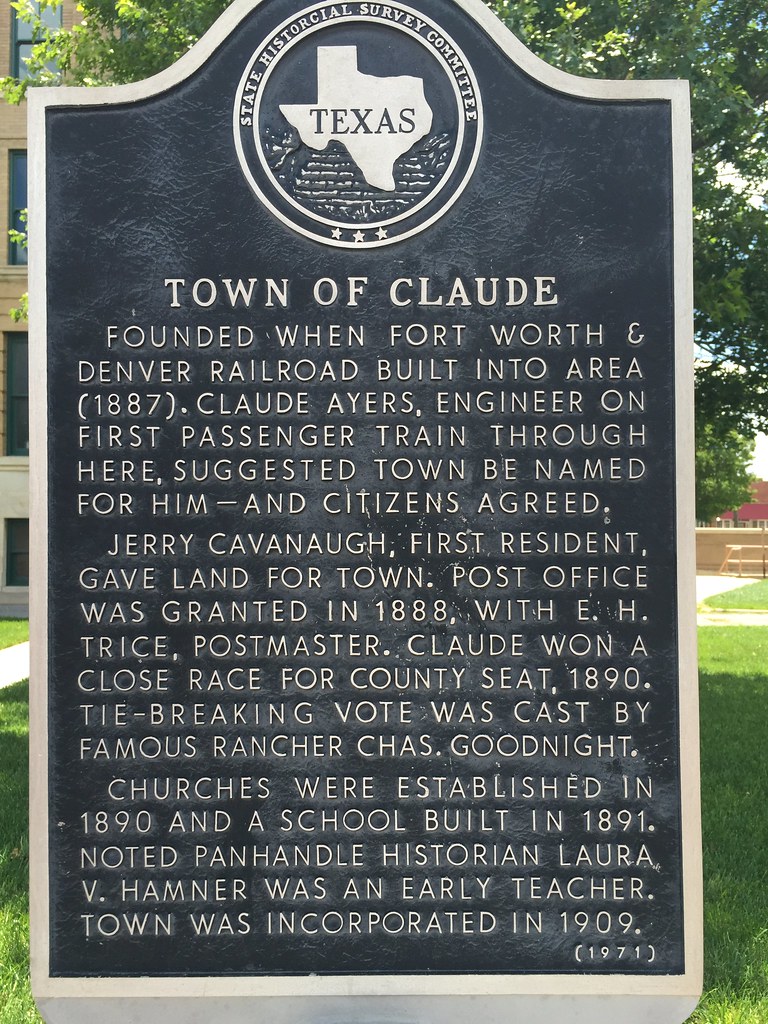 .The next morning, though, Jim came back to the Cottage to inform me the farmer we are cutting for insisted that we bring the Cottage out to the yard of one of his vacant homes. So, we headed there to scope things out. It appeared things would work wonderfully after the electric plug was redesigned to fit our plug. A quick trip to Home Depot in Amarillo solved that problem.

Sunday morning we moved the Cottage to our new home in the country. With the yard being a bit rolling, it took a bit of ingenuity on Jim’s part to level the house and still keep it solid enough to withstand a strong wind. You see, when the jacks are extended too much, the house is a bit more wobbly than you want. Jim had an idea but it would require another trip to the home store in Amarillo. He knew what he wanted to do. I just offered my help when he needed it. This is what he came up with. At least now if the storms roll in, we won’t have to worry too much about tipping or falling off the jacks because we have a solid foundation! 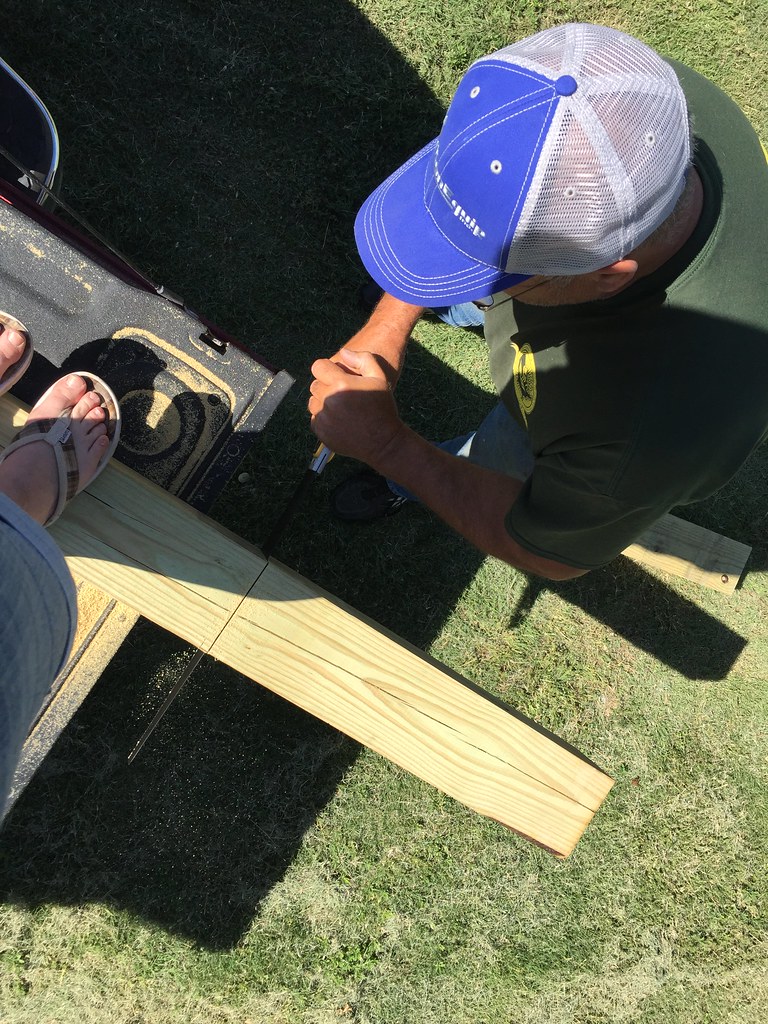 Me doing my part – standing on the wood blocks. 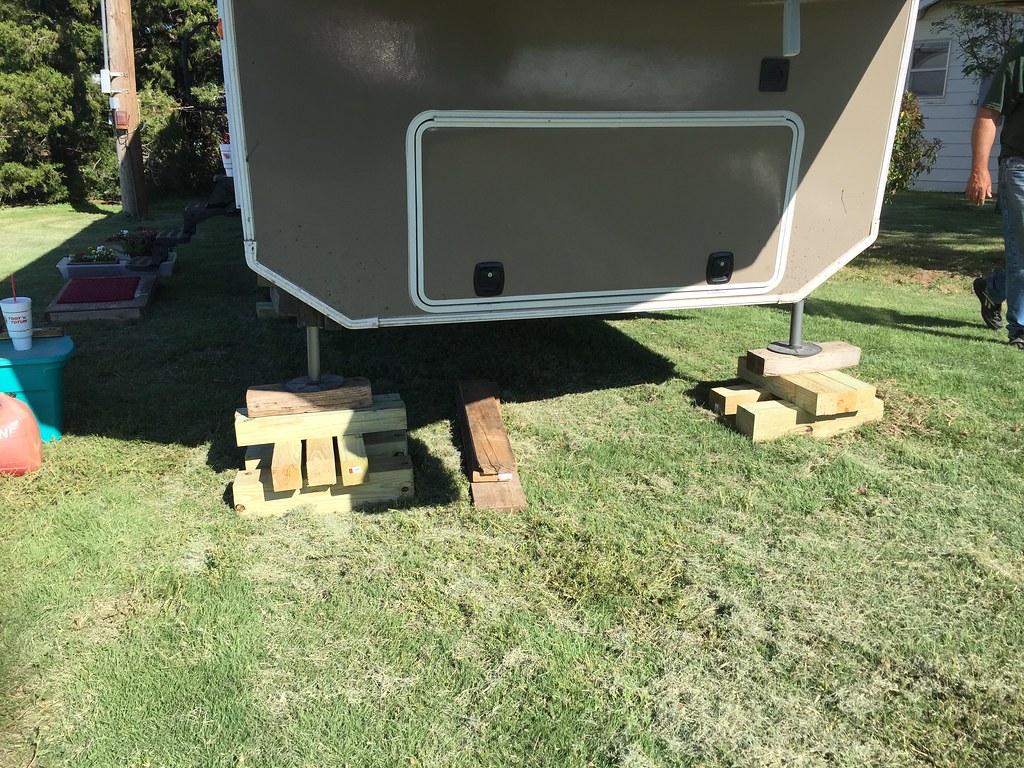 When we began this adventure, we borrowed my grandparent’s trailer house. Grandma wasn’t one to do anything but load it up and head down the highway. That’s what I thought it should be like when we decided to make this adventure our livelihood. I didn’t know any better.

I met a harvester friend many, many years ago. I was invited into her trailer house and realized hers was more than just a trailer house – it was a home. I decided right then and there that I wanted my Cottage on Wheels to be a home. So, I created it to be that. I began hanging pictures, quilts and had flowers. So, when I was asked the same ‘ole question year after year, “Don’t you miss being home?” I could say, “Nope! I have everything in my 40 ft. of space that I have at home.” 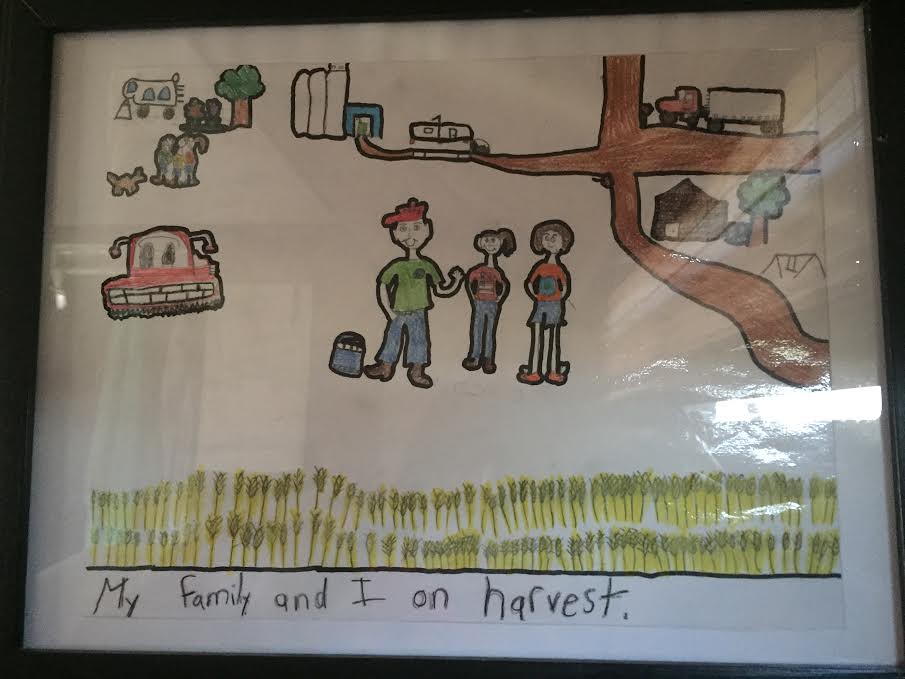 This was drawn by Taylor for a school project. 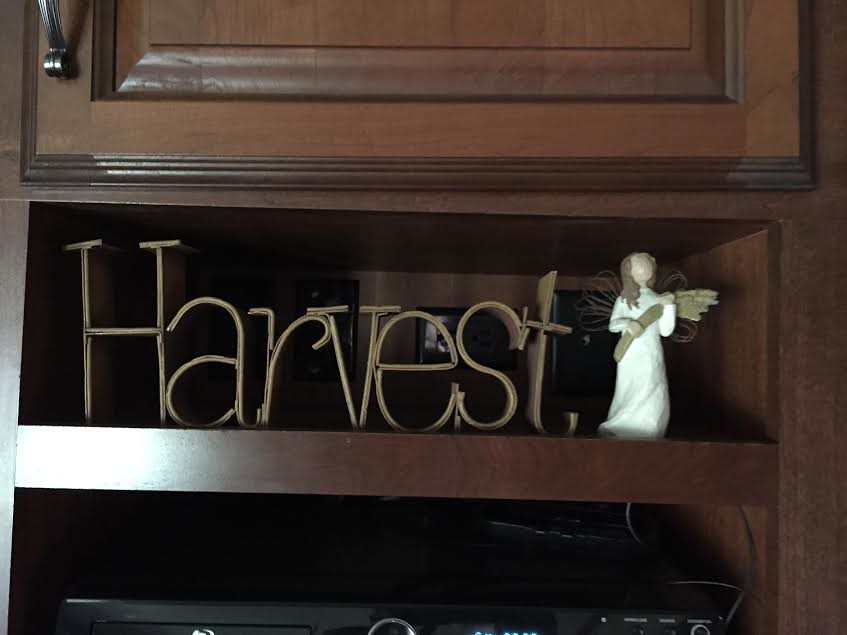 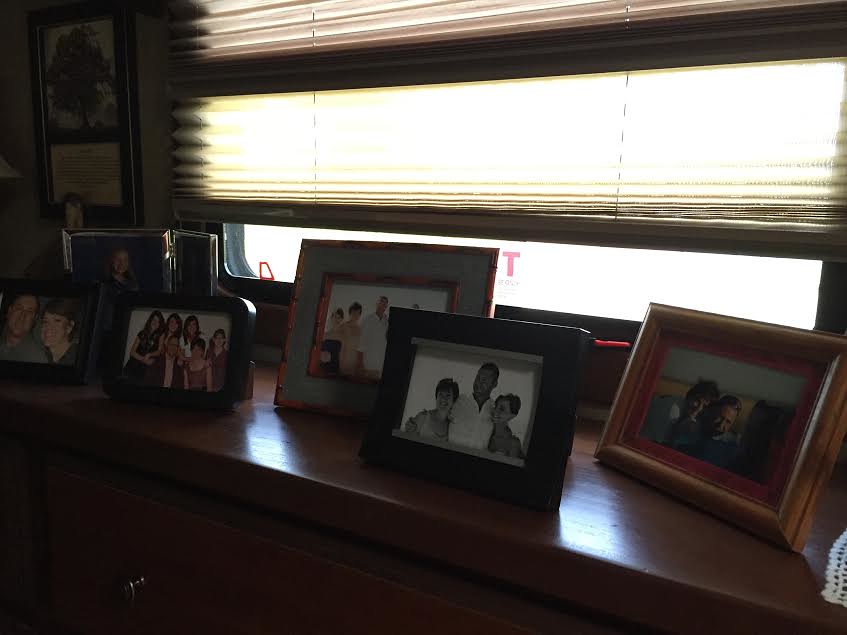 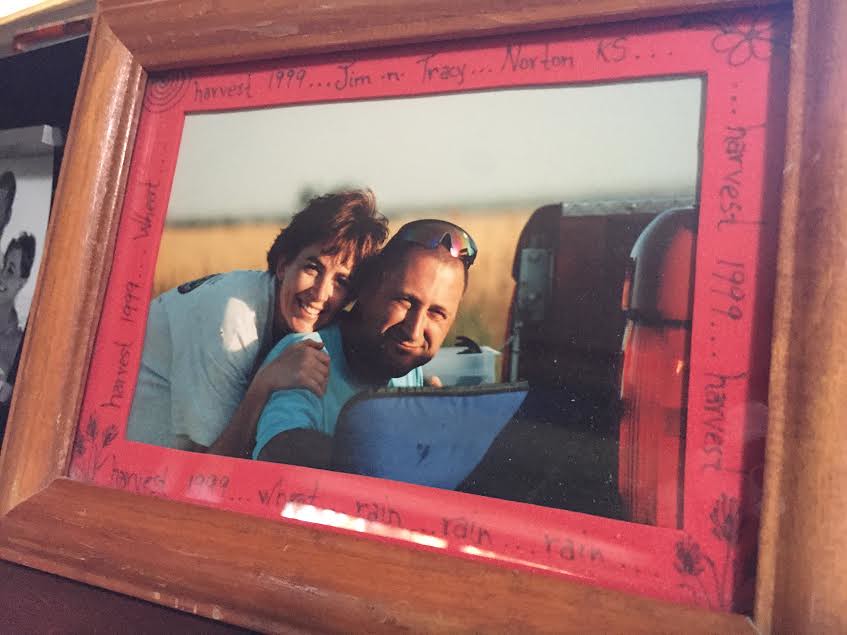 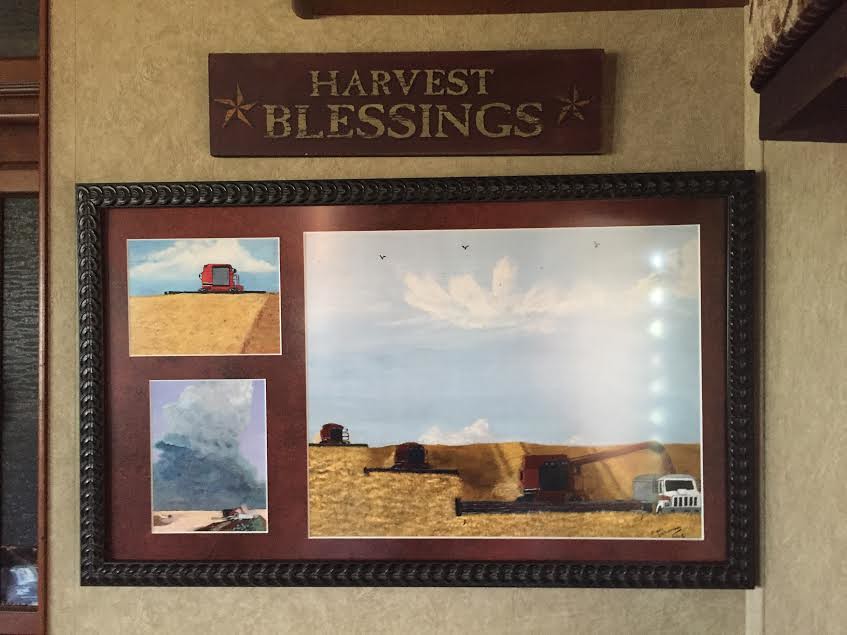 This picture is pretty special to me. These are copies of original prints created by Mary Stolzenburg of Stolzenburg Harvesting. Mary was a mentor to me. Someone I looked up to within the harvesting industry. It was a great loss when she passed away from cancer. Mary makes our journey every year. 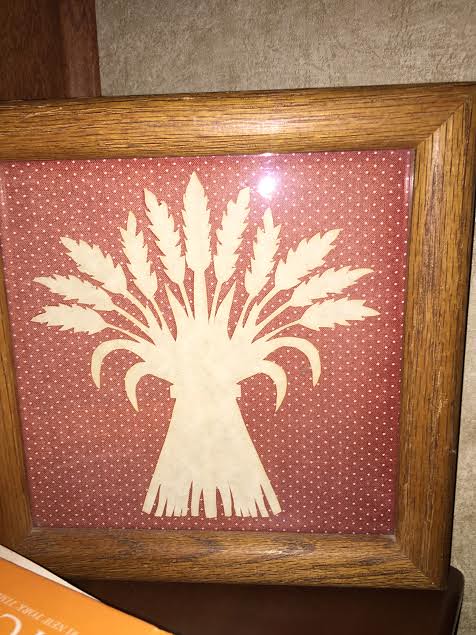 Jim’s mom made this for me – not sure of the year. 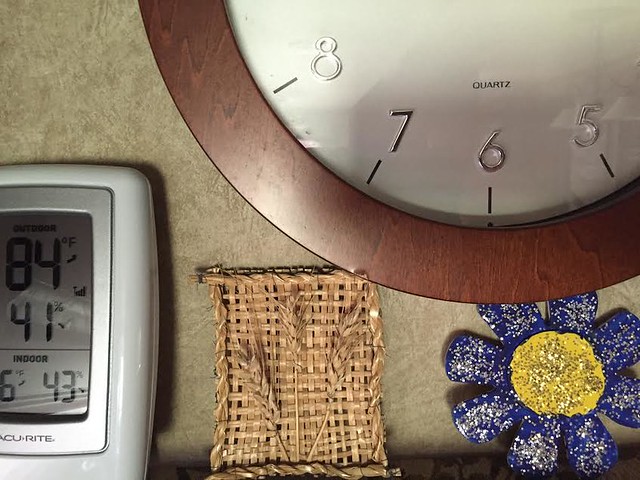 There are two pieces here that mean a great deal to me. The wheat was something Jenna made many, many years ago after being taught how to do this by another mentor – Linda Bachman. The glittery flower was something given to me more recently by Brooklyn and Jillian. 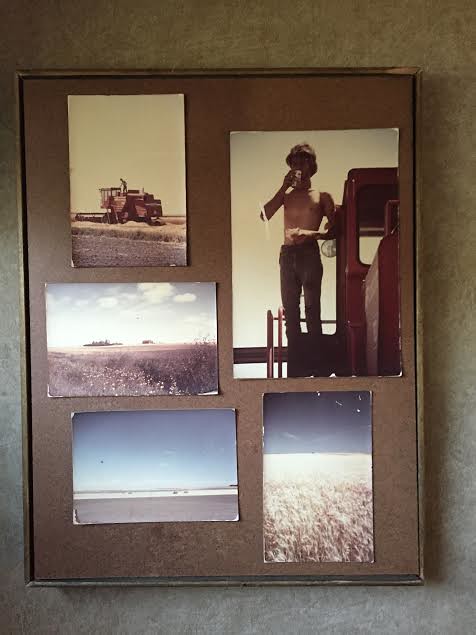 These pictures were taken in 1974 by a National Geographic photographer in Lodgepole, NE. That skinny young man is now my husband. 🙂 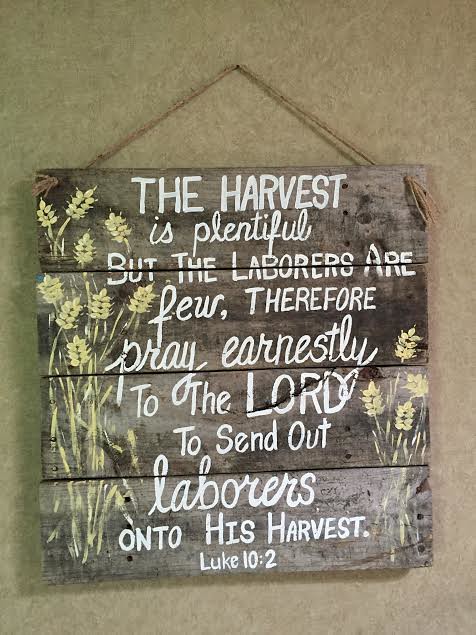 This wonderful gift was given to me a couple of years ago for my birthday by dear harvest friends. Every time I hang it up on my wall, I think of each of them!

Is trailer living easy? Not all the time. It seems like if something is going to go wrong, it will. For instance, toward the end of last summer, the washing machine decided to quit. What did I do then? Well, load the laundry up once a week and head to Limon, CO (40+ miles away). The Colorado farmers offered their washing machine, of course, but I opted to just take a whole bunch of dirty clothes to the laundromat and get it done at once. It was also the time to get stocked up on groceries, too.

So, before we left this year, Jim told me to attempt to run a load of laundry in the machine. Guess what…it worked! Go figure. It continues to work – until we get 40+ miles away from town again, I’m sure.

This year my coffee pot decided to quit the second day on the road. Not acceptable! So, to Walmart in Amarillo was a must. The electric water heater decided to quit. I’m not sure if Jim got that fixed or not – thank goodness for the propane backup! We’ve had the refrigerator quit in the past. Now THAT’S one that I don’t want to happen again any time soon! Living out of a large cooler is not fun! What I’m getting at is this – it’s not always easy but it’s what we make of it. It gets to the point where you just shake your head in frustration and either live with it or attempt to fix it. 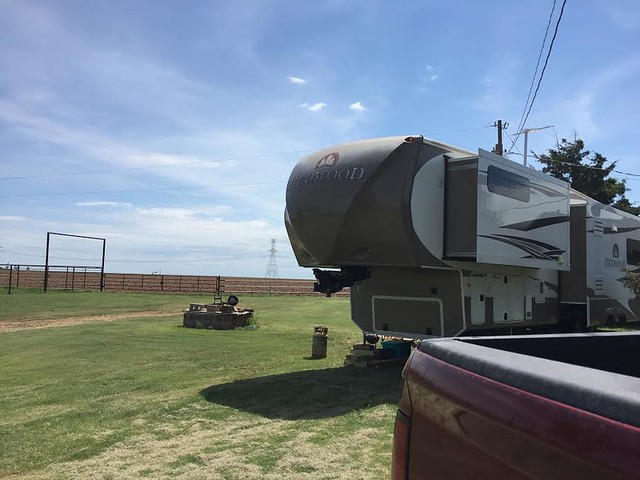 Our home for the next couple of weeks. 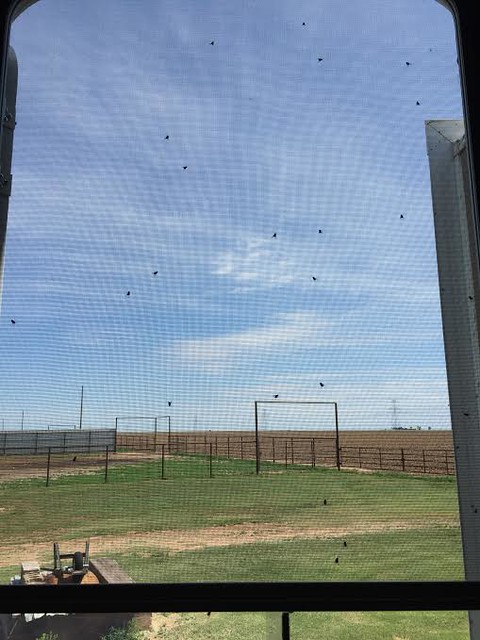 Each one of those black spots is a fly. I’m not sure why the flies are so bad. They absolutely love hanging out at the door. When you open it, ten flies go out but fifteen make their way in. A losing battle! 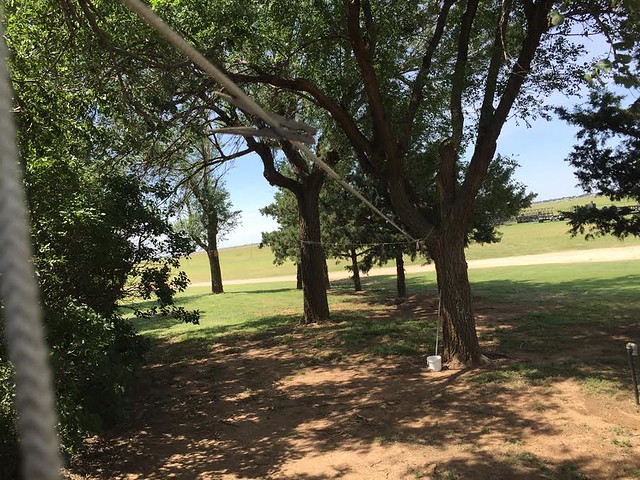 Pretty much loving this clothesline!

I decided I wanted to make some cookies. I just saw a chocolate chip cookie recipe that was shared on a Facebook page I recently created. Let me tell you about my cookie fiasco and then I’ll tell you more about the Facebook page.  I had all the ingredients – or so I thought – and thought making a batch and freezing them for the soon-to-be-needed lunches was a terrific idea. Since I don’t have my cooks with me this summer, I have to rethink how to do things.

So…I had butter. Great. Next is the sugar. Both brown and white sugar was needed. I pull out the brown sugar container and could tell I probably didn’t have enough. Right on! I was short ½ cup. Well, I’ll just add that much more white sugar (which I did). That shouldn’t be too noticeable, right? I creamed my butter and sugar, added the eggs and vanilla. Next, I’m supposed to mix the dry ingredients together and add them to the creamed mixture. 4 cups of flour is what it calls for. I pull out my flour container and can tell right away I’m lacking what I need. I measure 3 ½ cups. I’m going to just use what I have and hope it all works out. It requires 24 hour refrigeration, so I’ll let you know how they turn out.

I’ve been waiting for God to open doors. A few of them had been slammed shut and my heart was needing an opening. With an idea and some encouragement by a couple of great friends in this industry, I decided to begin a Facebook page dedicated to the women of harvest. I sent Marji Guyler-Alaniz (founder of FarmHer) a note and told her of my idea. I asked her if it would be okay if I named it HarvestHER – sort of going off the movement she had created. I wanted to provide a place for the silent partners to tell their stories and be able to have the support of knowing there are others out there who understand the challenges of keeping a family and a crew healthy and happy. It’s been a figure-this-out-as-we-go process. Thank goodness people are forgiving! Right now I have four women providing me with their daily stories, recipes and pictures. I’m really excited about the possibility this can offer those of us who are the backbone of the crew. If you’re interested in knowing what it takes to keep it all together and working perfectly (or not so perfectly), check it out!

The chocolate chip recipe that I’m attempting – imperfections and all – is the one posted by Randi Beckley of Beckley Harvesting and can be found in the HarvestHER’s Recipe album. As I said, I’ll let you know how it turns out with the lack of ingredients. 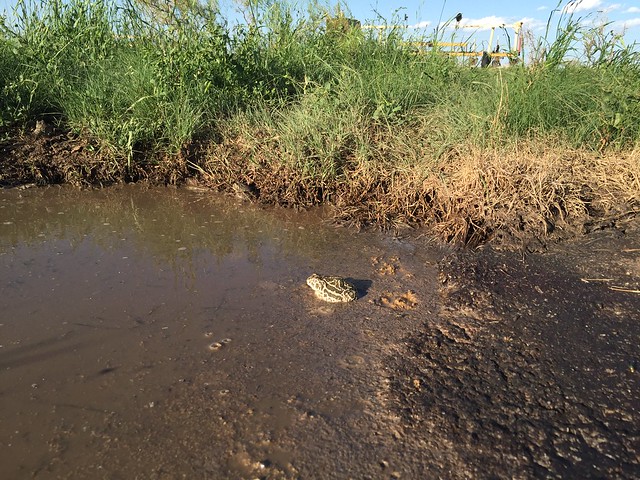 The frogs are certainly loving the water holes! 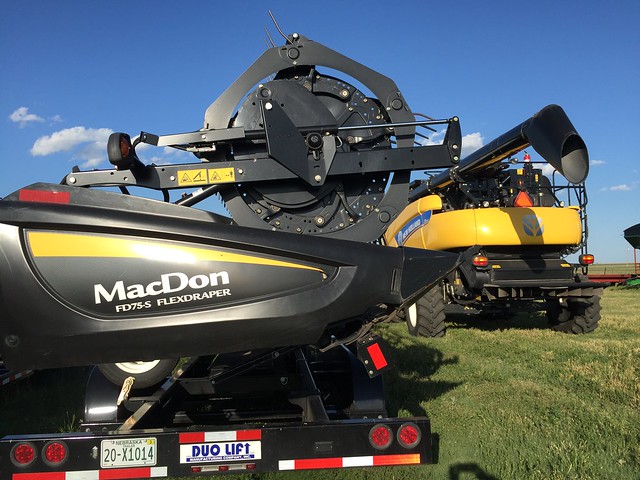 The typical harvest motto – Hurry Up and Wait!

We’re going to test the wheat to see where we’re at. It’s not that we’re waiting on rain or wet fields. We’re waiting for the green tint to leave. We’re hoping the heat of the next several days will make it happen soon!

All Aboard, harvest, Texas, wheat