All Aboard Harvest | “I Wonder if it’s Worth It”
12938
post-template-default,single,single-post,postid-12938,single-format-standard,qode-quick-links-1.0,ajax_fade,page_not_loaded,,qode-title-hidden,qode-theme-ver-11.2,qode-theme-bridge,wpb-js-composer js-comp-ver-5.4.7,vc_responsive 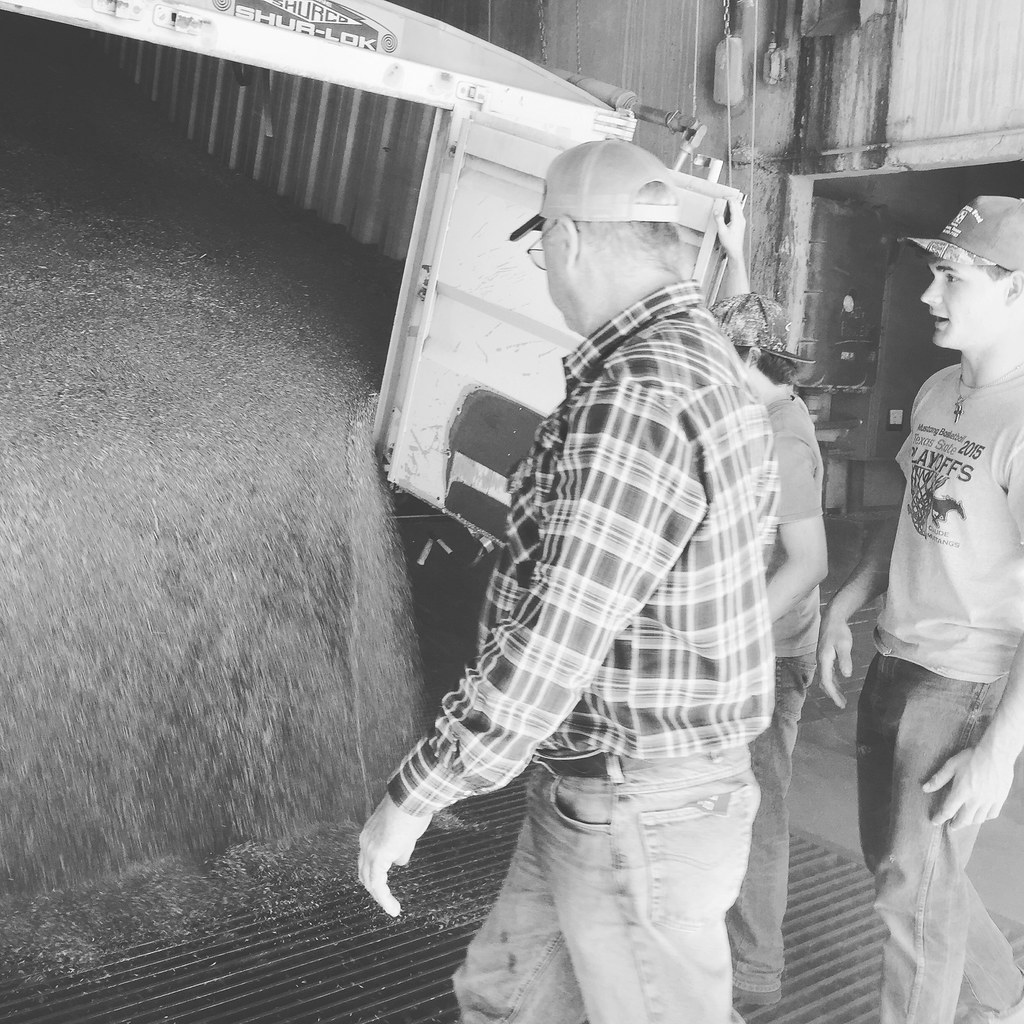 The very last load of Texas grain being dumped on Tuesday.

Deerfield, KS –There’s lightning in the sky west of us tonight. I wouldn’t care if it did rain right now.

The days have been exhausting since we finished the last acres for Bryan (our Claude, TX farmer) on Tuesday. Long and exhausting! The heat has been horrible and I’m certain that has a lot to do with how wore out I feel at the end of the day. After the last grain was dumped, we headed back to the field and cleaned the header and the combine off. We also replaced the sickle bar with a new one. We’ve been hearing how heavy the crop around Garden City could be – maybe with a lot of lodging (laying flat on the ground). We wanted to make sure we were ready for that. It’s a good thing we did what we did because as we were slipping the old one out, it broke. 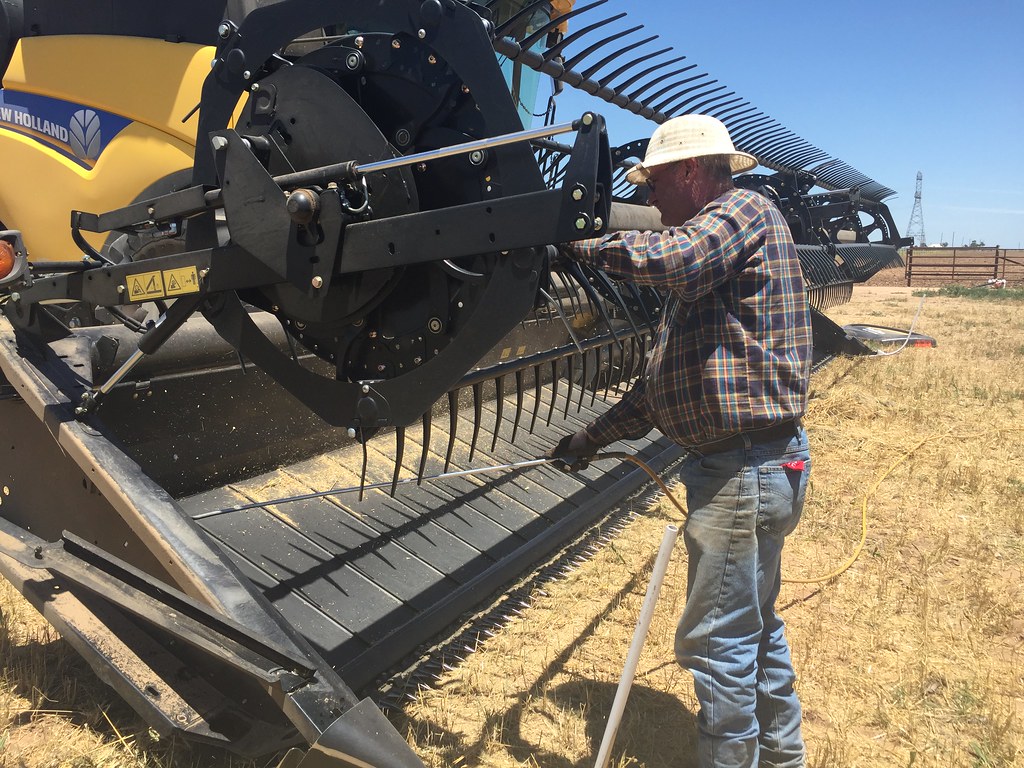 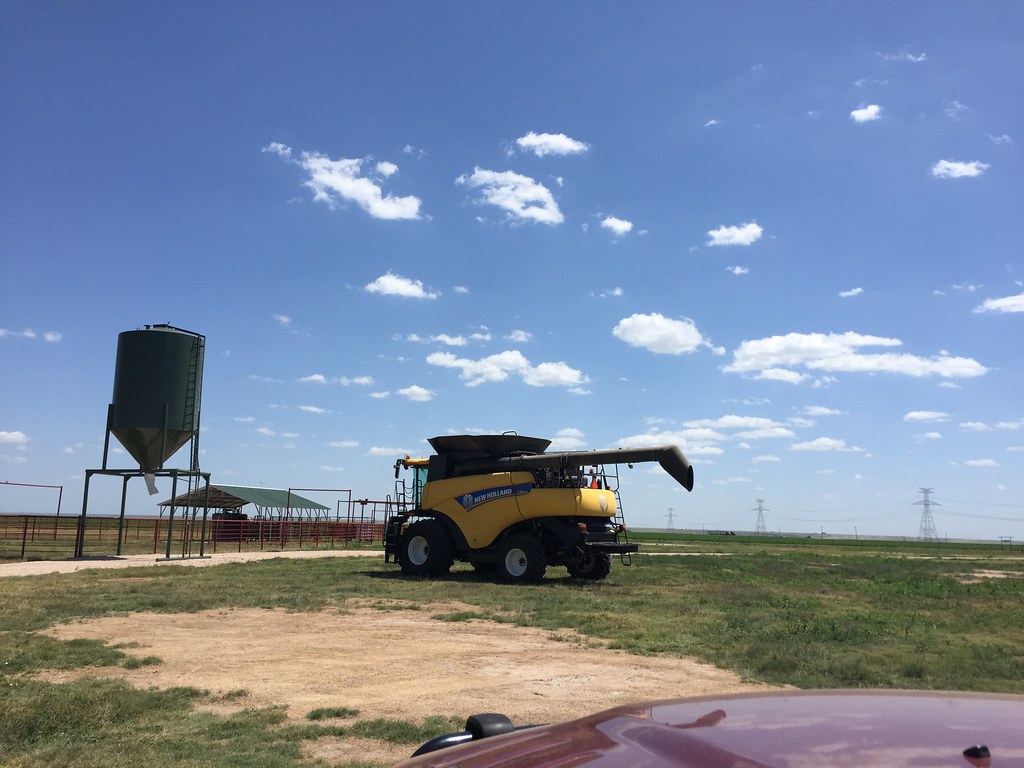 Our first trip north was made late Wednesday afternoon. The first half of the equipment heading to Deerfield, KS included the trailer house and Frank pulling the header trailer. We really hated to leave during the hottest heat of the day but had no choice. We arrived in Deerfield about 11:30 pm anticipating we’d pull into the trailer court and set up the trailer as minimally as possible due to the late arrival. We knew we really wanted a shower and air conditioning. What we didn’t expect was to see a near full campground. We’ve never seen so many trailer houses in this park before – ever. We haven’t found out the reason yet for all of the them but I know it’s not for harvest.

Due to the filled campground and it being so late, we decided to head over to the grain elevator and park in the yard for the night. Both Jim and I were so tired, we didn’t care that it was hot and we were filthy from the day of loading in the extreme heat. We parked the trailer so what little breeze there was could make its way into the camper through the open windows. The thermometer read 87 degrees inside the trailer. I know I eventually drifted to sleep. A shower and air conditioner sure would have been the best way to end the day.

We got up early Thursday morning and took the trailer house back to the campground. It was much easier to see what we were up against in the light of day. We got it set up and decided to shower before heading back to Claude after load #2. I was just stepping into the shower when Jim’s phone rang. It was our farmer in Colorado. I had this sick feeling in my stomach and felt something must be wrong for him to be calling so early in the day. The phone call was just ending as I was stepping out of the shower. It was “the” phone call. One, as a harvester, you don’t want to get…let alone, when it’s your next stop. The input costs were too high. The grain prices are horrible. They have one of the best crops they’ve ever had but just didn’t think they could justify hiring us to help this year. We thought we’d be making our way toward Colorado in 2-3 weeks. What does a harvester do in a situation like this? Go to plan B. What’s plan B? Right now, we have no idea. This has already happened once this year – the beginning of the season. Remember? There was no wheat to cut in Shattuck, OK this year because the farmer had grazed it due to the very same reasons. We found acres to make up for those that were lost. I can only pray that we will find acres to make up for what we had counted on cutting in a couple of weeks. “The best-laid plans of mice and men often go awry.”

Not only do low commodity prices affect the farmer, it trickles down and affects so many more – equipment manufacturers, harvesters and even the community in which the farmer lives. Anyone and everyone who is involved with that farmer and his crop is challenged by the low crop prices. It’s hurting all of Agriculture.

We locked up the trailer house and made our way south again. There was a lot of silence on that trip. And then I heard Jim say, “I wonder if it’s worth it?” We work so hard to try to make a living with this service we offer the farmer. Expenses are high with the cost of equipment, the insurance, the fuel, upkeep of the equipment, food and the expenses of traveling the highways. The one large expense we don’t have that most other harvesters do is the labor bill. Is it worth it? When he said that, my whole insides sank. I hated to see him disheartened. When we start to lose the desire of continuing a job we love, it turns into work. Somehow, I need to encourage him and remain positive. That’s not always easy to do. “We’ll get through this; we just have to have faith – and one day at a time”. My grandma’s favorite saying – one day at a time. Trying to see the whole picture is just too difficult.

We made it back to Claude late afternoon. We loaded the combine and got squared away with a couple of bills in town. Bryan offered to take us out for supper. We had a great time! It was good to laugh and enjoy the company of a new-found friend!  We left Claude Friday morning. 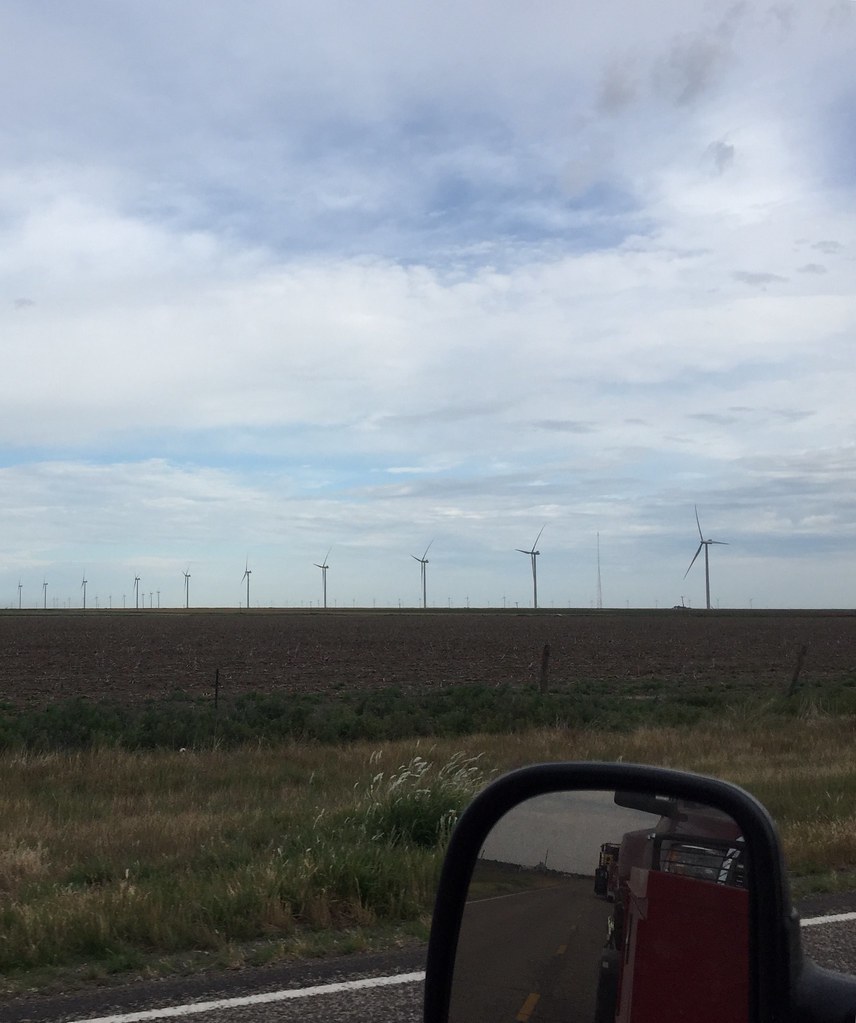 These wind turbines are just north of Claude. Thanks for treating us so kindly Texas! 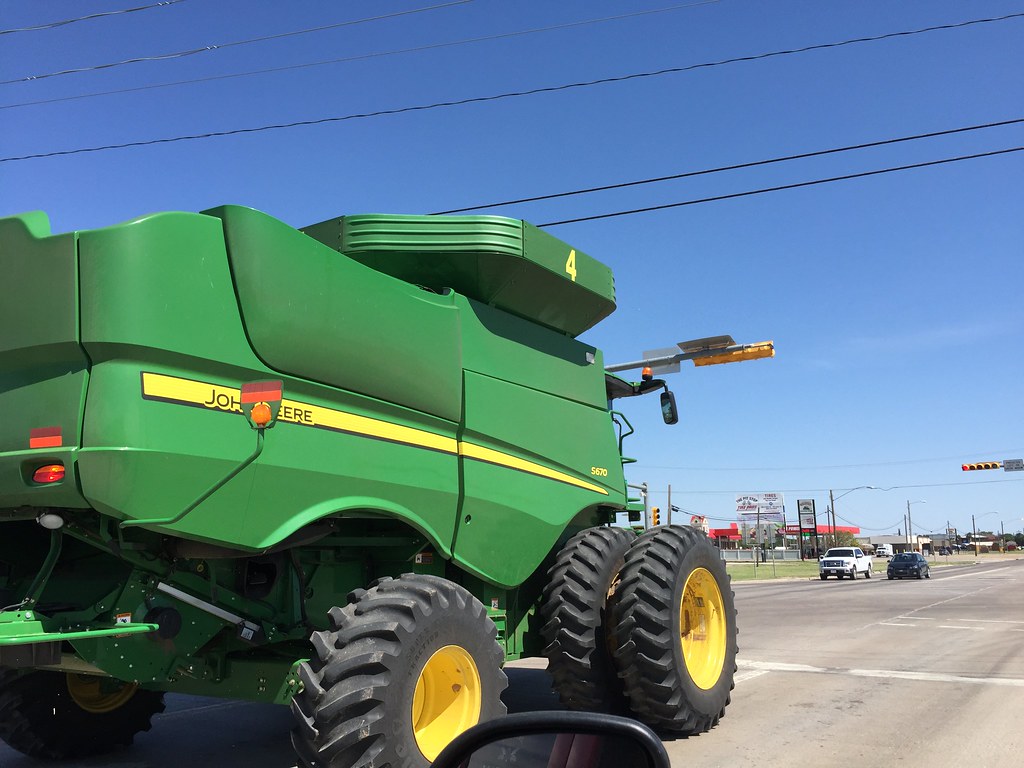 As we were pulling into the town of Perryton, Texas, I followed this John Deere combine. He was sort of “hogging” the road so I decided I would follow until it was safe to pass. It gave me a sense of pride seeing that big green beast making its way through the city traffic. I pulled up beside it at the red light and glanced over to see it was a friend of ours. I waved big at him as he was waving big at me. What a strange connection we harvesters have!

We arrived back to Deerfield late afternoon. It was HOT! I believe the pickup said 103 degrees. I certainly didn’t want to unload everything but that’s exactly what we did. We started to undo what we had done only a day or so ago. The combine was unloaded, the header was unloaded, the miscellaneous items we bring along were unloaded from Frank, the trucks were made road ready and we were off. Did I mention it was hot? I could feel all energy being sapped from every inch of wherever it was prior to stepping out of the cool pickup to the heat of the day. I literally drug my feet with each step I took.

We are back in the business of cutting wheat! The crop is a much different one than the one we cut in Texas. The monitor was showing 95 – 100 bushels per acre. There’s lots of straw; therefore, I have to go much slower through the field than I have been. The fields are absolutely beautiful!

I’m ready to put these past couple of exhausting days behind me and push onward. As Winston Churchill once said, “Success is not final, failure is not fatal: it is the courage to continue that counts.” We’re going to continue! 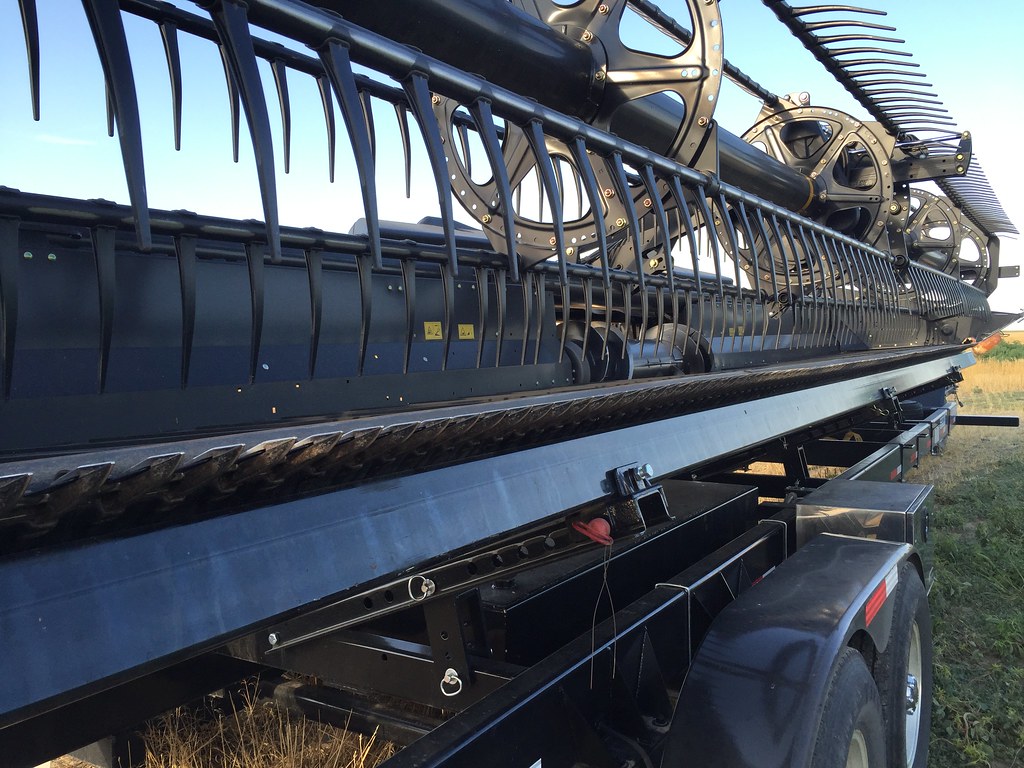 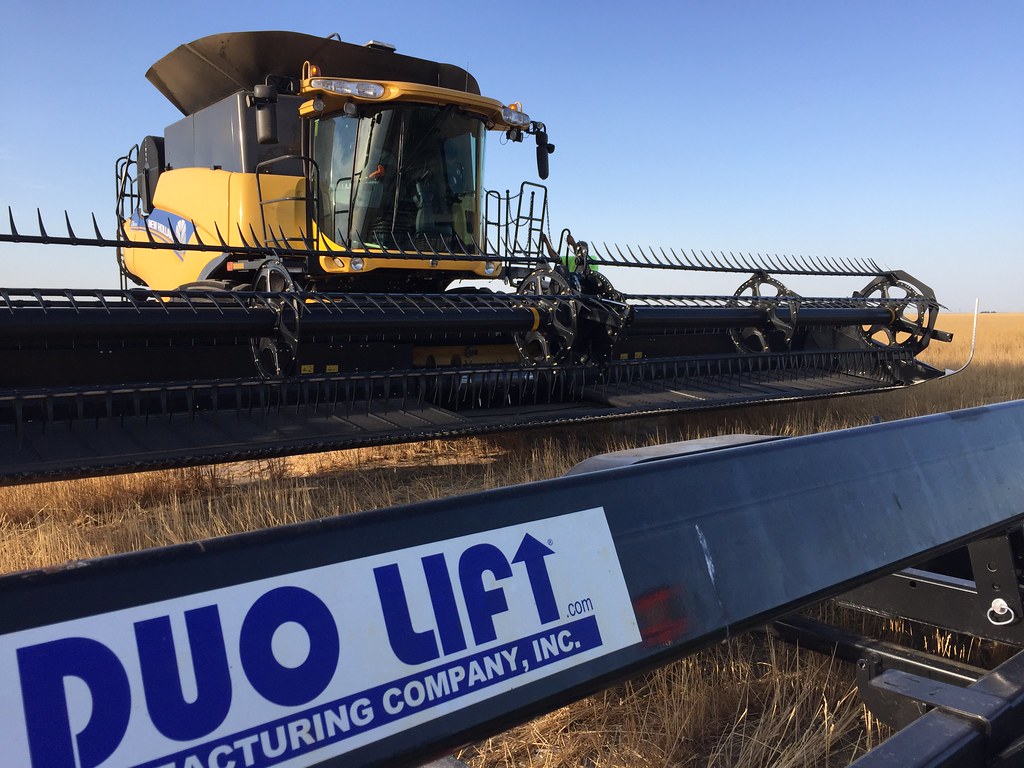 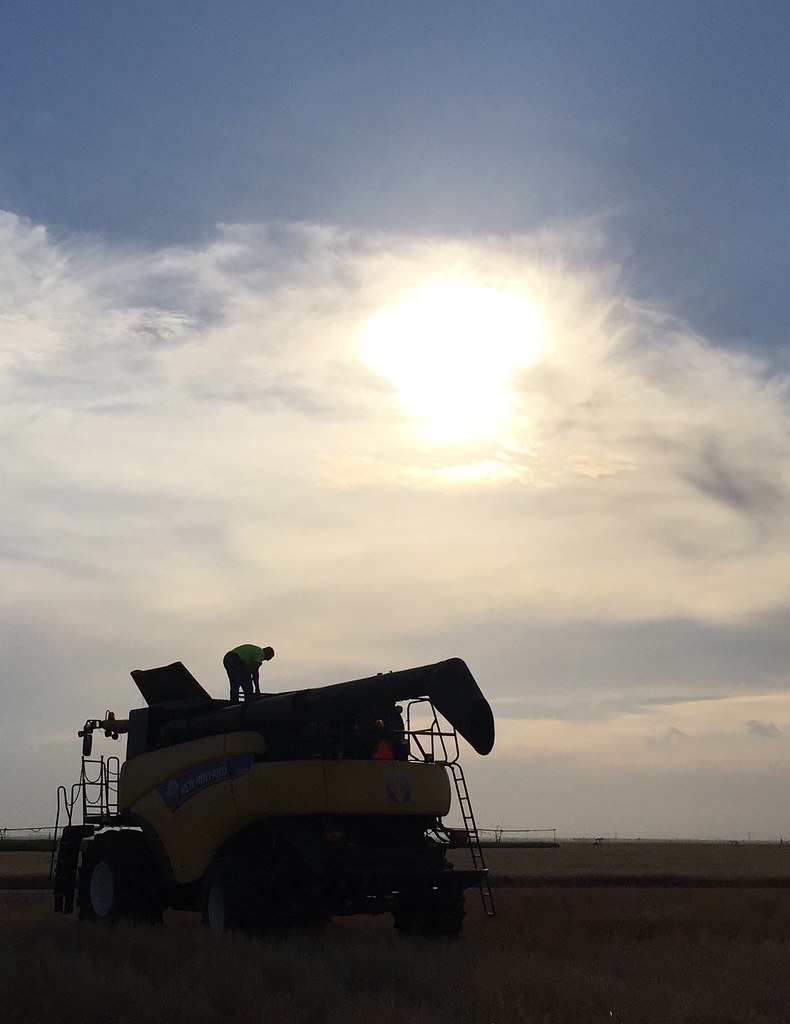 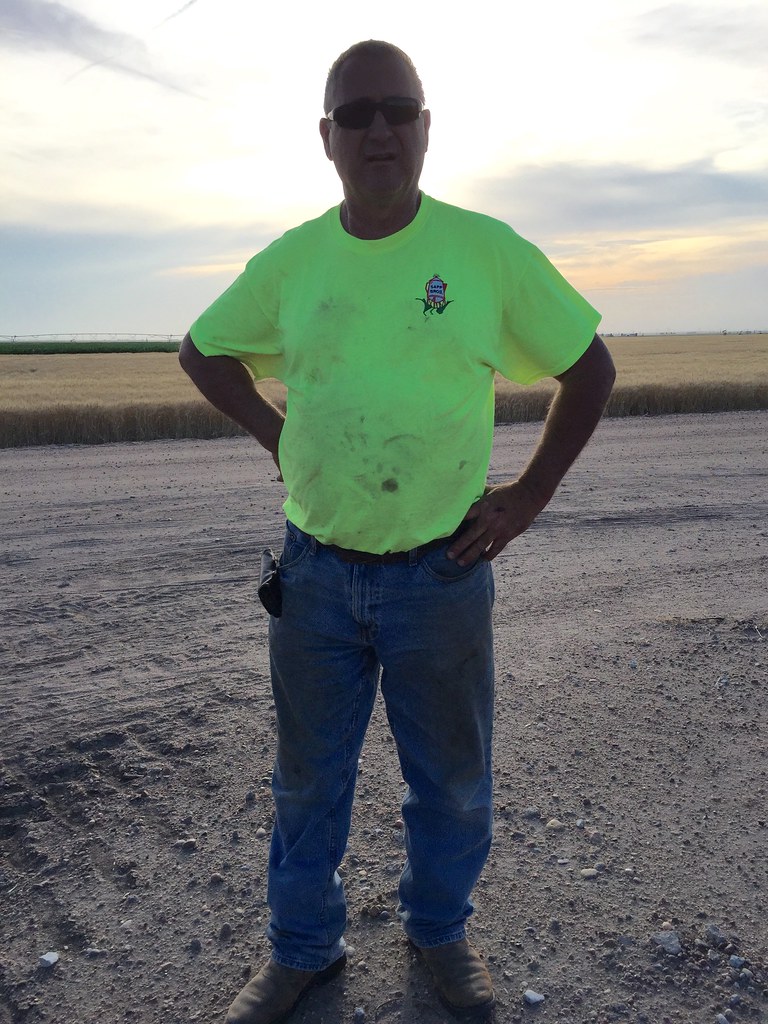 “Jim, stand there and let me take a picture of you.” “Why?” “Because I need a picture for the blog”. 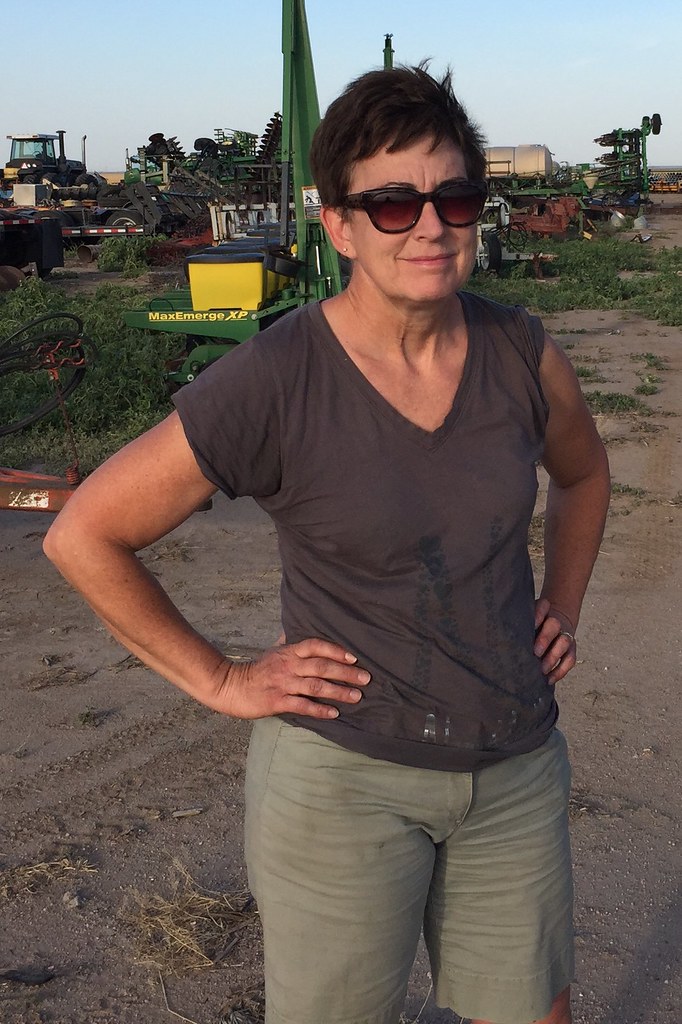 “Okay, only if I can take a picture of you”.