It’s hard to believe that Colorado is complete. We were still cutting there this time last year. The crews were fortunate to have excellent weather since the 4th and 5th of July respectively and cut daily until the 22nd when they completed Colorado. We had some rains move through, but they were spotty enough that we were able to move to other fields to cut, or just experienced a delay until the late morning or afternoon. The excellent wheat was just so much fun to cut, and farmers in good spirits (if you don’t think about grain prices)!

The kids and I really enjoy the Brush stop. Everything we need, minus church and the grocery store, is easily accessible on foot which is awesome for exercise and avoiding additional car/car seat time! People get used to seeing us around town on our way to the library or other places. As I stated last year, they have a WONDERFUL library and children’s program and we just love attending. They have several beautiful parks as well.  But even with such positive things, it’s the time of season, where the rat race catches up and the walls of the camper start closing in. If I’m honest, despite the adventure and knowledge the kids are gaining some positive things from the experience, it can be difficult at times to be on the road with two little ones.

As a result, I had a down day last week.  I feel guilty feeling that way when there’s such much to be thankful for, but we all have down days from time to time and try to remember its part of life.  It’s amazing how things can sometimes work out when you need a little encouragement. On this day in particular, I received a surprise email from a church friend letting us know they missed us and hoped we were doing well.  I received a text from another friend. Then our farmer’s wife called and invited us over to spend the day at their house. Oh, what a treat that was to be able to have space to spread out and play and be able to run around in a real yard!  Adult conversation and fellowship was a special treat as well in addition to lunch. It was just the pick me up I needed to put my harvest game face back on and get back in the game. The kids were re energized too after visiting and we greatly appreciated their hospitality. I know those were three blessings from Above.

That night Ryan told me that with the hot weather and dry conditions the end had snuck up much faster than expected. They would be finished the next day if everything went as planned. Saturday was spent preparing equipment for the last part of our wheat harvest run and our longest hauls yet. The crew with Mark headed to Montana on Sunday. The kids and I headed for an unexpected, quick trip home since the moving and packing process is such a crazy time and it would allow me to catch up with the mail that finally caught up to us in Brush.  We were also able to catch up with the kids’ grandparents which was a huge blessing. Ryan made a flying trip home as did some of the crew to drop off and exchange some equipment. We will need draper headers for North Dakota. On Monday, Ryan tied up some lose ends locally, picked up parts and headed back to Colorado. They made it as far as Rapid City, South Dakota, Tuesday night. The kidlets and I will head out later this week. The thought of the 11+ hour trip (that’s not including stops) is enough to make this mama feel a little sick to her stomach, but I’m going to try to maybe sneak some fun things into the trip to break it up a little. I didn’t travel to this stop last year since I was expecting Lady A, so it will be something new for the kids and I. It’s the last push of the wheat harvest marathon and time to kick it in for the home stretch! It’s hard to believe we’ll be starting wet corn next month!!! 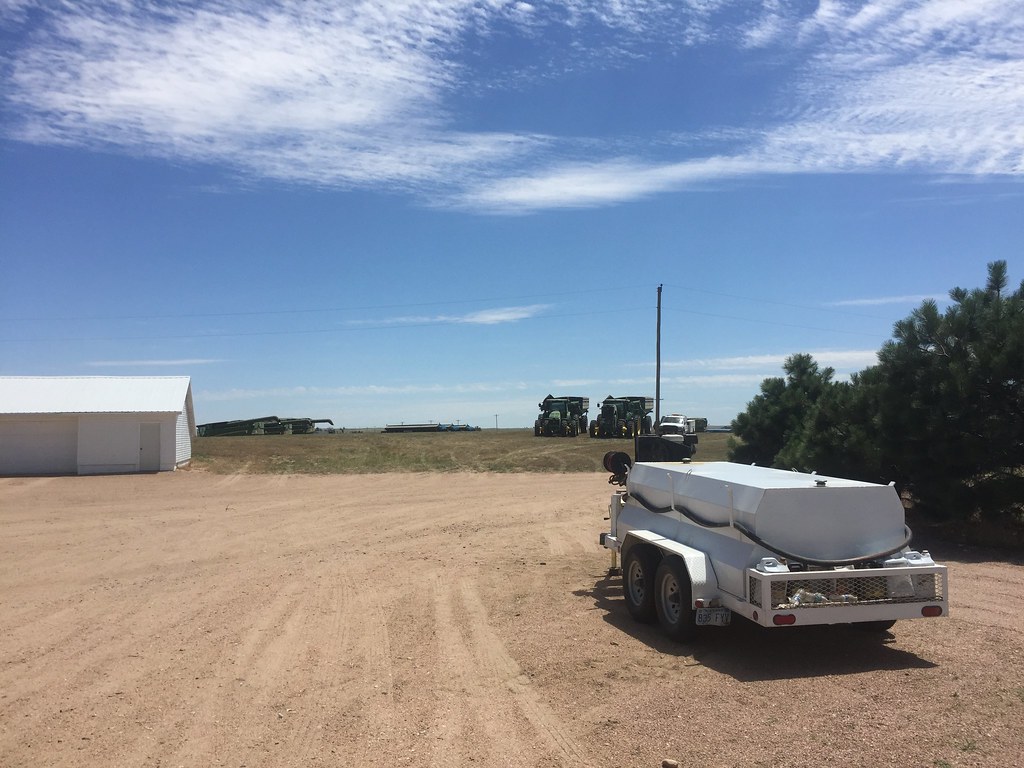 Equipment getting a bit of a breather! (Photo credit: Ryan) 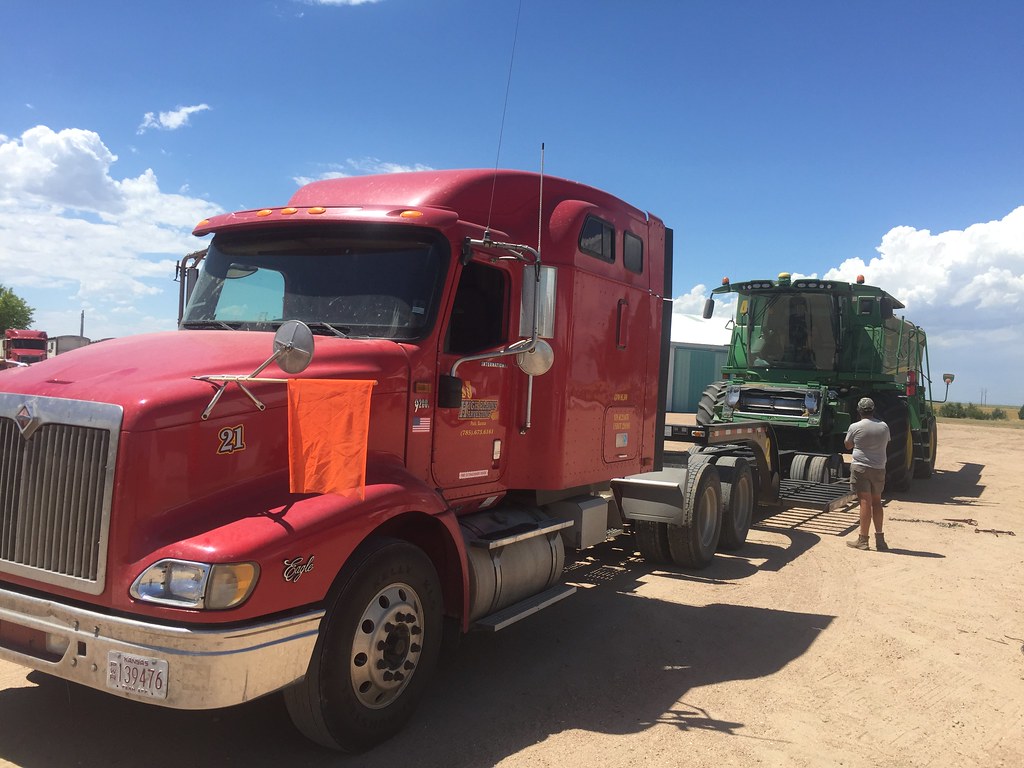 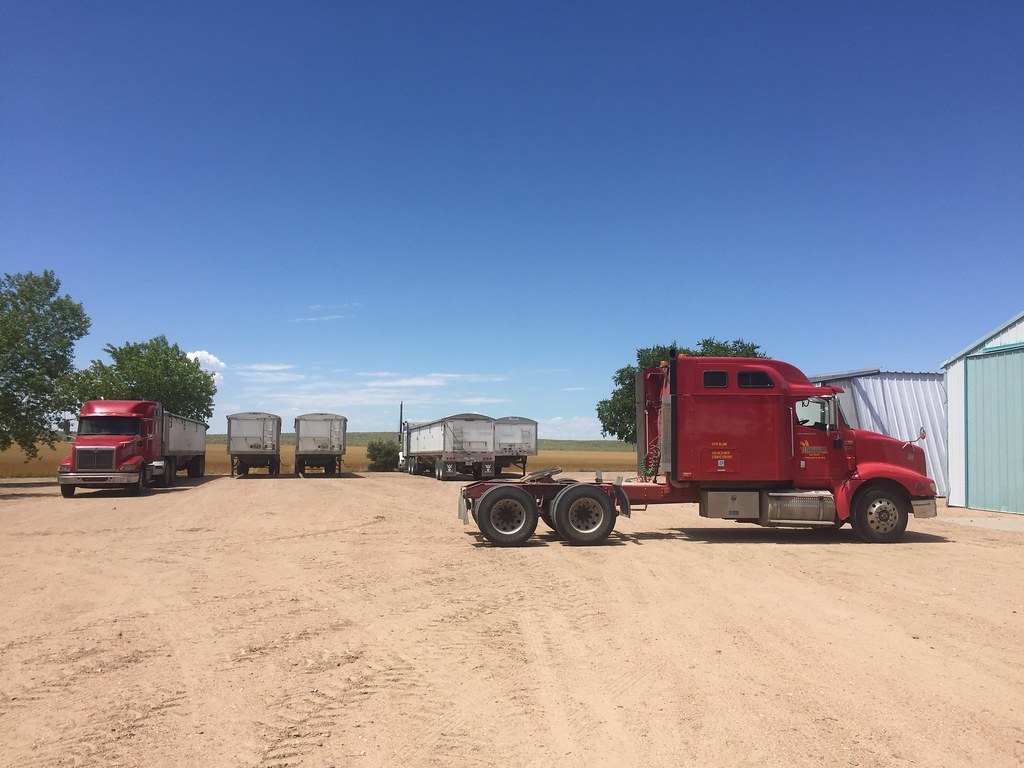 One of our farmers kindly let us use their facilities to do some equipment maintenance before making the long journey north. (Photo credit: Ryan) 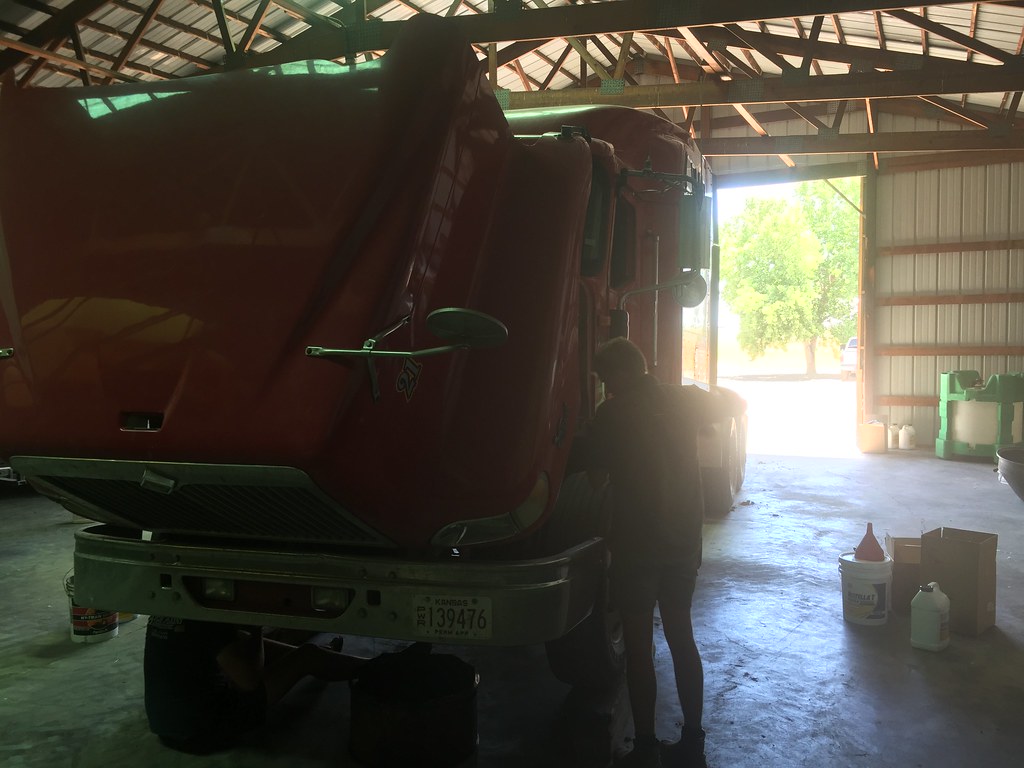 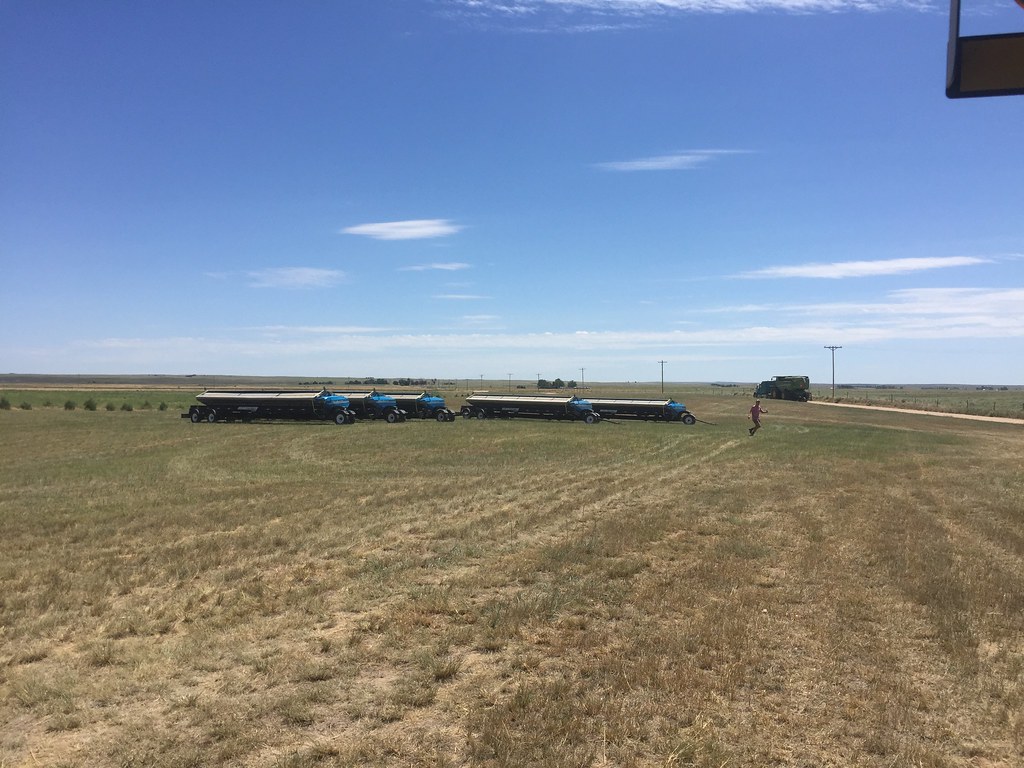 The Shelbournes are packed and ready to roll! (Photo credit: Ryan) 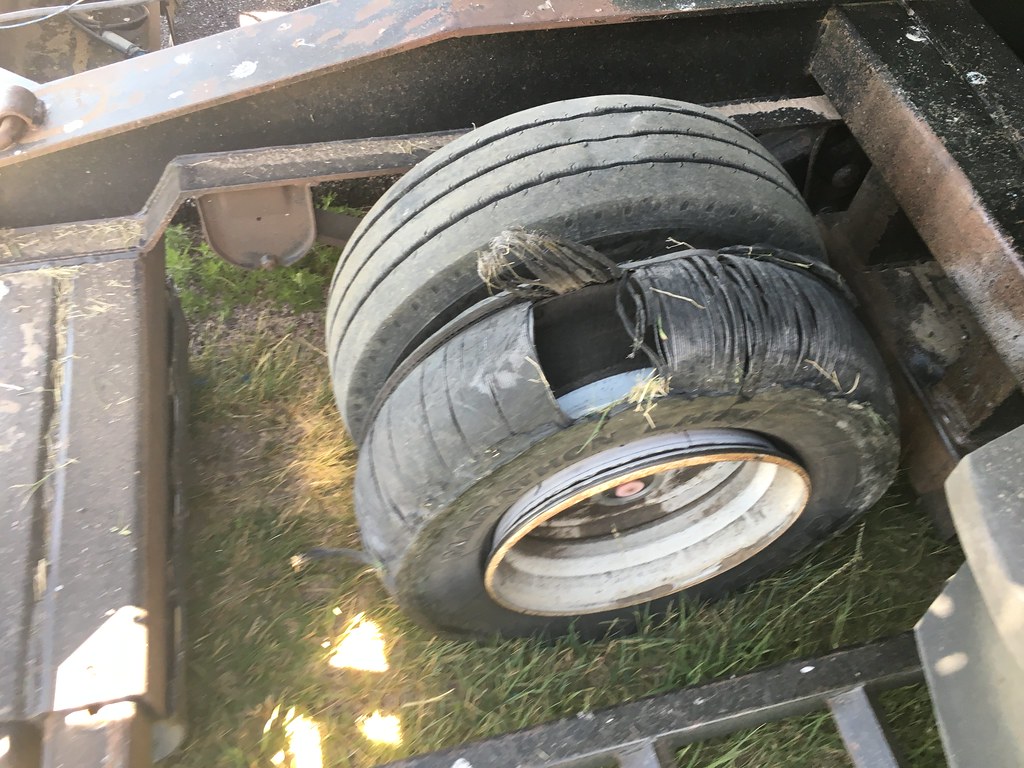 These tires weren’t team players on the way to Montana! (Photo Credit: Mark) 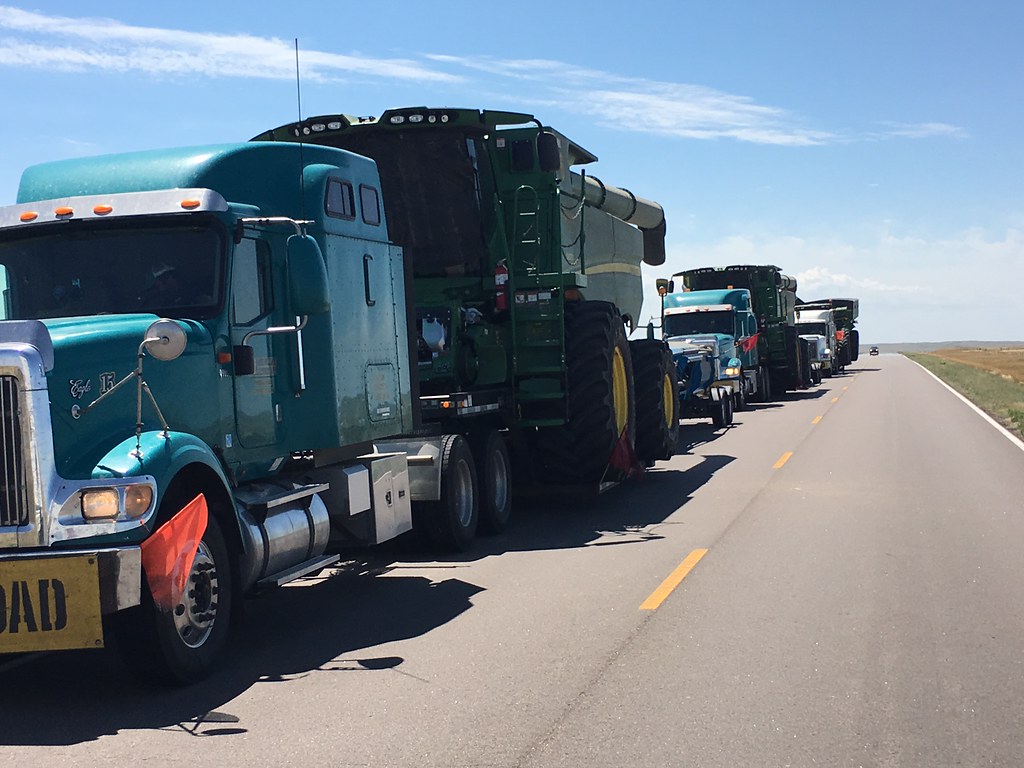 Here is some of the caravan heading to Montana. (Photo Credit: Mark) 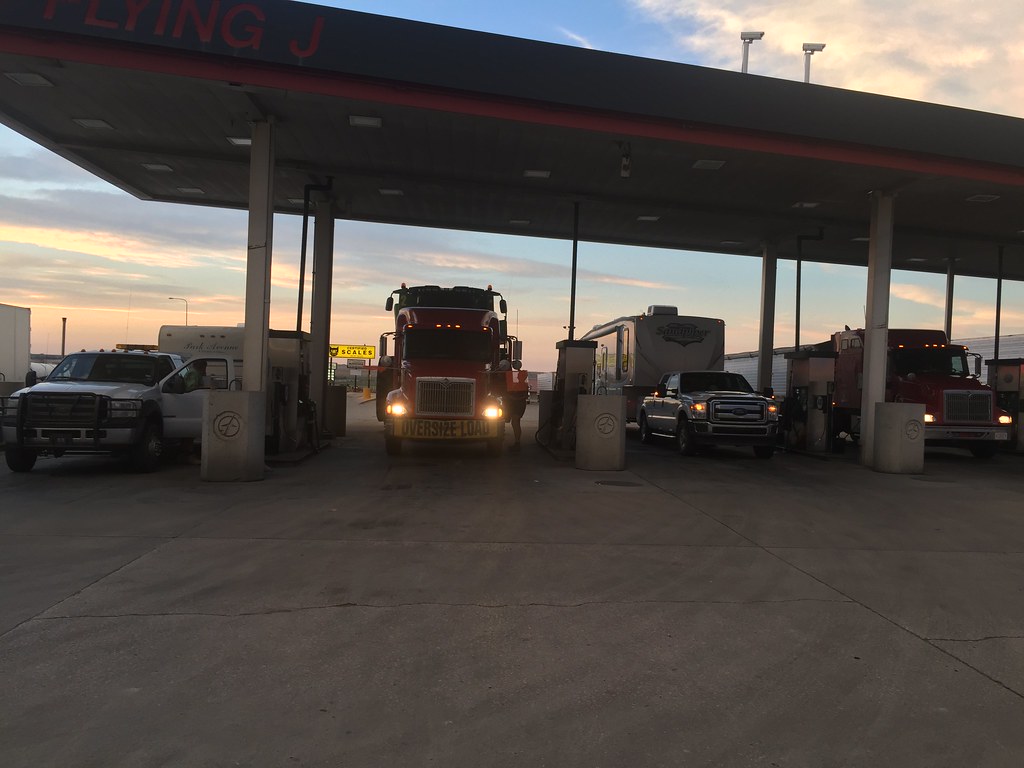 HPH taking up the diesel bays in Rapid City, South Dakota, makes for a fun, but very expensive photo op!

agriculture, All Aboard, Colorado, harvest, wheat