All Aboard Harvest | The Final Days of Wheat Harvest 2016
13407
post-template-default,single,single-post,postid-13407,single-format-standard,qode-quick-links-1.0,ajax_fade,page_not_loaded,,qode-title-hidden,qode-theme-ver-11.2,qode-theme-bridge,wpb-js-composer js-comp-ver-5.4.7,vc_responsive

Matheson, Colorado —
Wheat harvest 2016 has come to an end for the Z Crew. I get so involved with the moment and with everything it takes to get through our day I lose track of time and then, all at once, it’s over. Days just turn into more days. Time isn’t kept track of like most people’s lives. The clock isn’t watched as often while working with the sunshine.

It wasn’t until the last two years that it ended so early for us. For crying out loud, we used to cut wheat in Montana until well after the first part of September. It was spring wheat but it was still wheat. The girls began their school year in Jordan and we wouldn’t get home until mid-September or later. Speaking of the girls and Montana, Jamie and Jenna made the 2,000-mile trip to Jordan over the weekend to celebrate Jenna’s 10-year class reunion with her classmates. That was one of the best things we could have ever done—enroll the kids in school there! This lifestyle has provided wonderful experiences and memories for the kids. I know if asked, they would agree and would do it all over again. It’s a part of who they are—what helped create the person they have become. They have learned so much by being a part of so many different communities and getting to know people from south to north.

Let’s back up a bit. I tend to get sidetracked on different thoughts and then just wander.

In my last post, I mentioned that it had rained. We fixed a minor combine issue on Friday and then was going to get back to cutting, hopefully, by noon on Saturday. That didn’t happen. We didn’t get started cutting until 3 p.m. due to moisture. Once we finished filling a bag, we moved from red wheat to white wheat. The two can’t be mixed. We cut the rest of the day on Saturday and then finished the white wheat on Sunday evening. We even had to push through a sprinkle of rain to get it completed. This was the last day Ryan and Casey were going to be able to help so I was glad we got the field finished! 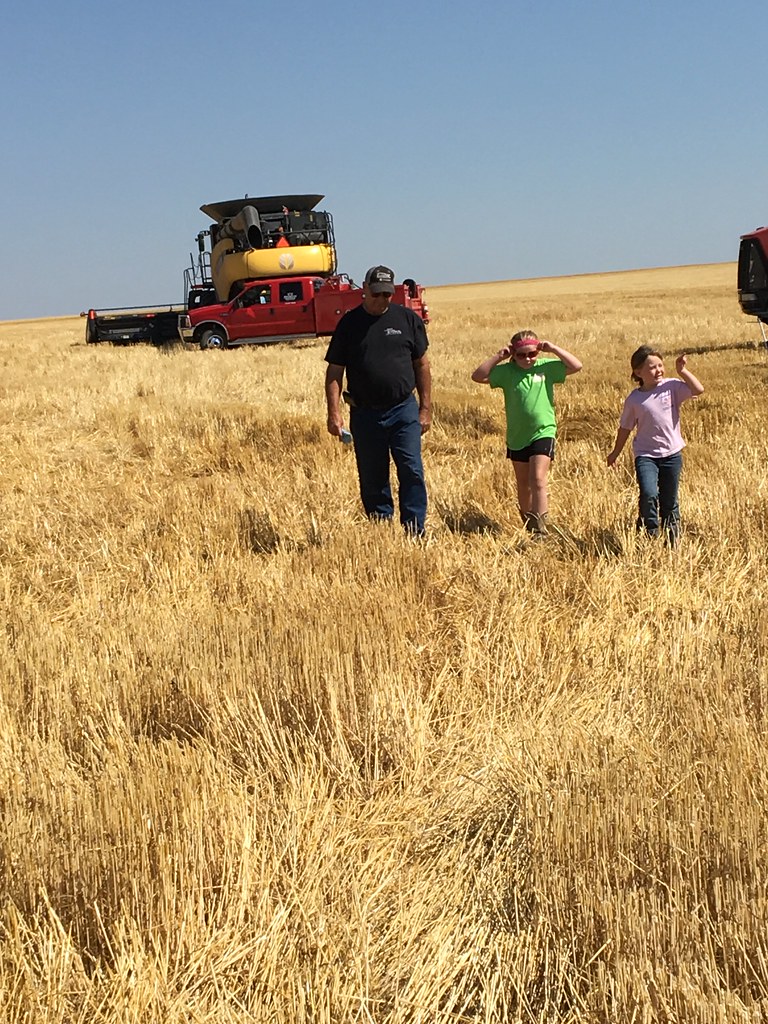 Haedyn and Shelby Graham were Jim’s helpers on Saturday morning. He left me at the trailer house to get a few necessary things taken care of. He came back to the Cottage for lunch and then headed out to the field shortly after. 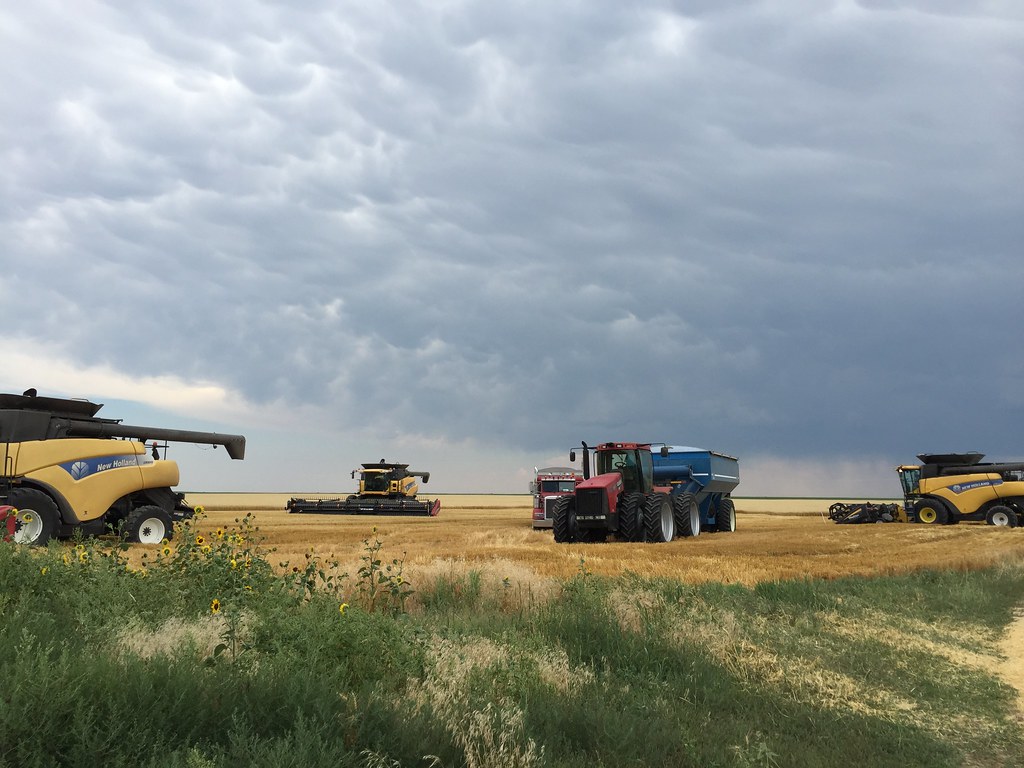 The “circling of the wagons” while waiting to hear the results of the moisture test. The ground seemed to be a little soft, making everyone a bit nervous about what we were in for. 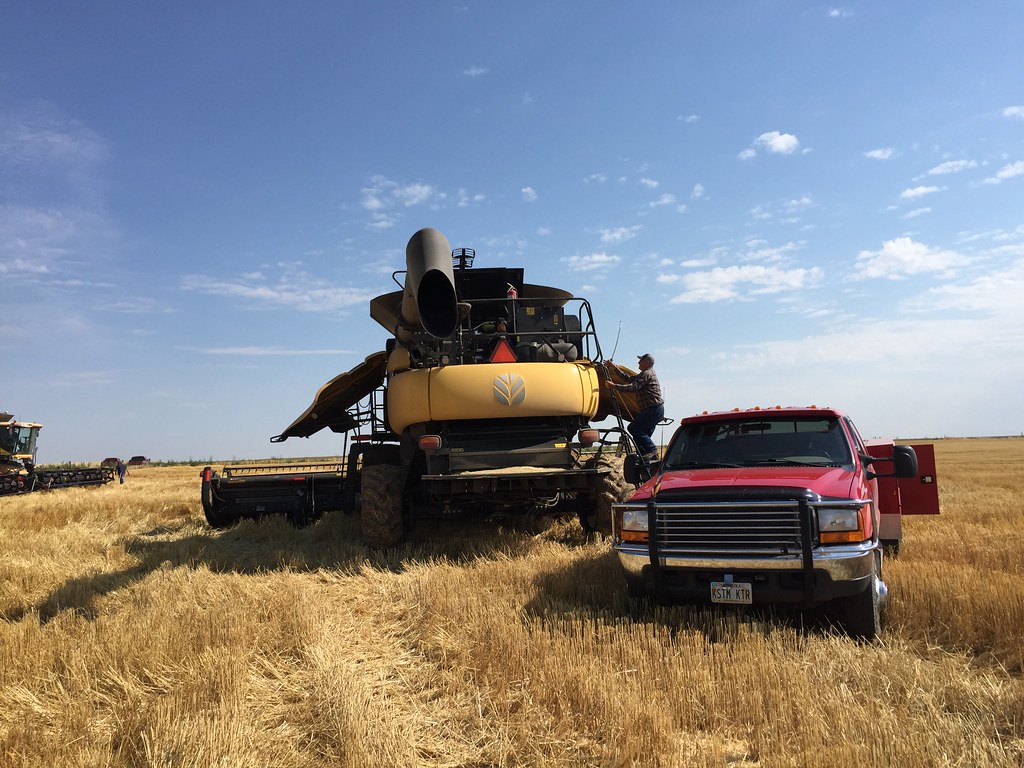 When the shields are open on both sides of the Beast, it looks like it’s ready to take off flying—sort of like “Chitty Chitty Bang Bang” (remember that show?). This was taken on Sunday morning during “servicing.” 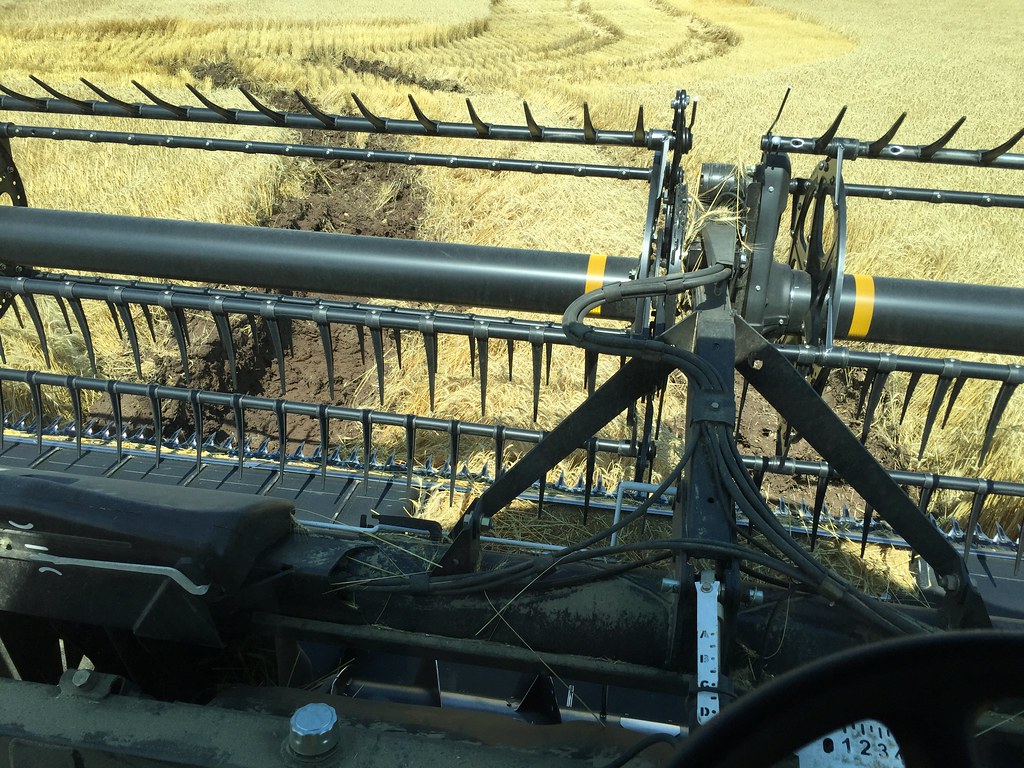 It was touch and go for all of us most of the entire day but I found the one soggy mud hole in the field. It took two tries and one broken chain to get out of this mess. And of course it had to be me. Guess when it rains, mud happens. 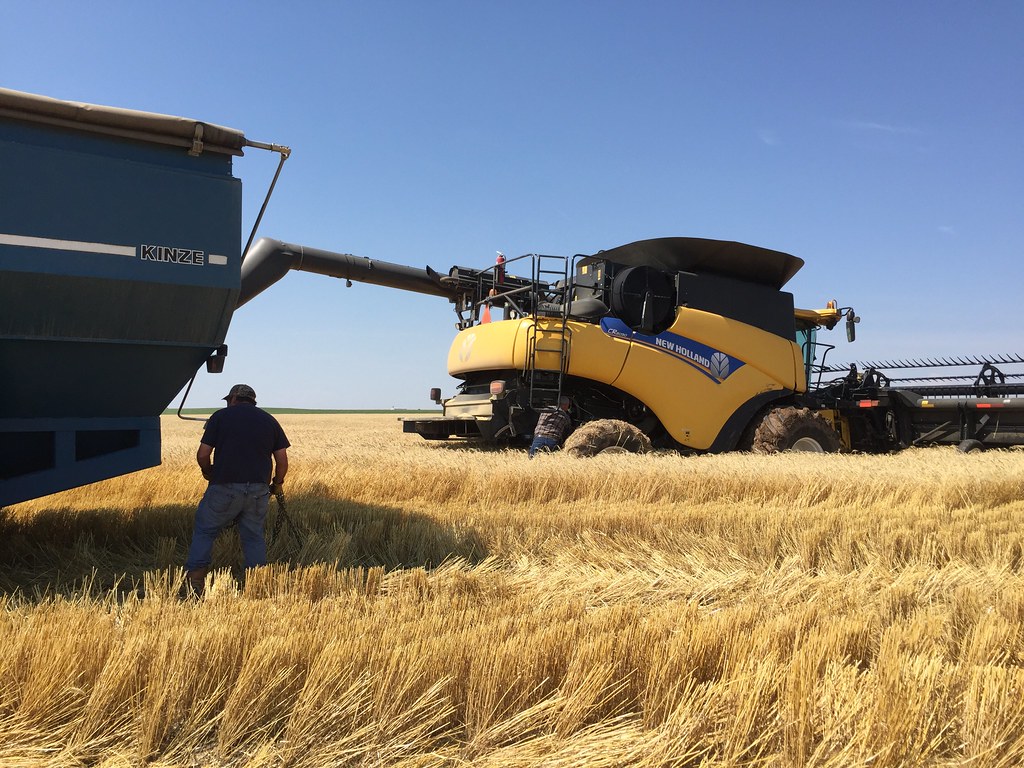 Jim and Beano making the chain connections from the grain cart to the combine.

On Monday morning, Ryan and Casey and the crew began the cleanup process. They were going to make the first trip home on Tuesday morning so their entire day was spent cleaning and loading. We, on the other hand, remained in the cutting mode and began helping the Maranvilles. It felt so good to be a part of their crew again—it just felt right. Well, almost. Chanse did a great job on the grain cart, but he has some pretty big shoes to fill! With the yields, we three machines kept him and the truckers pretty darn busy. 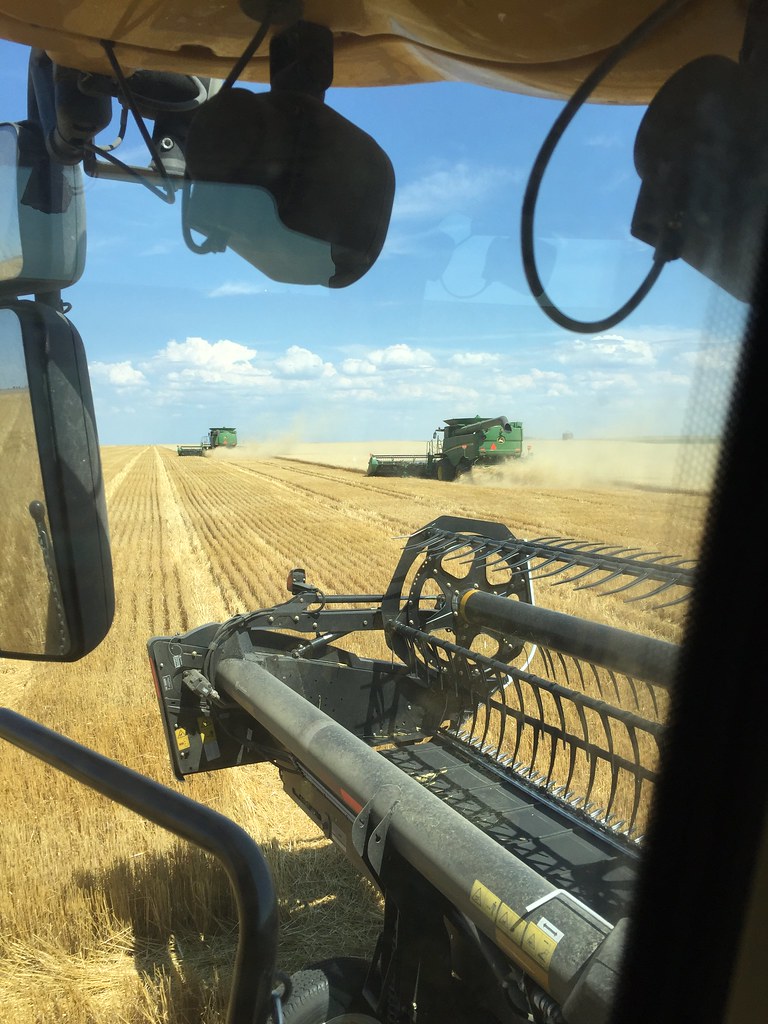 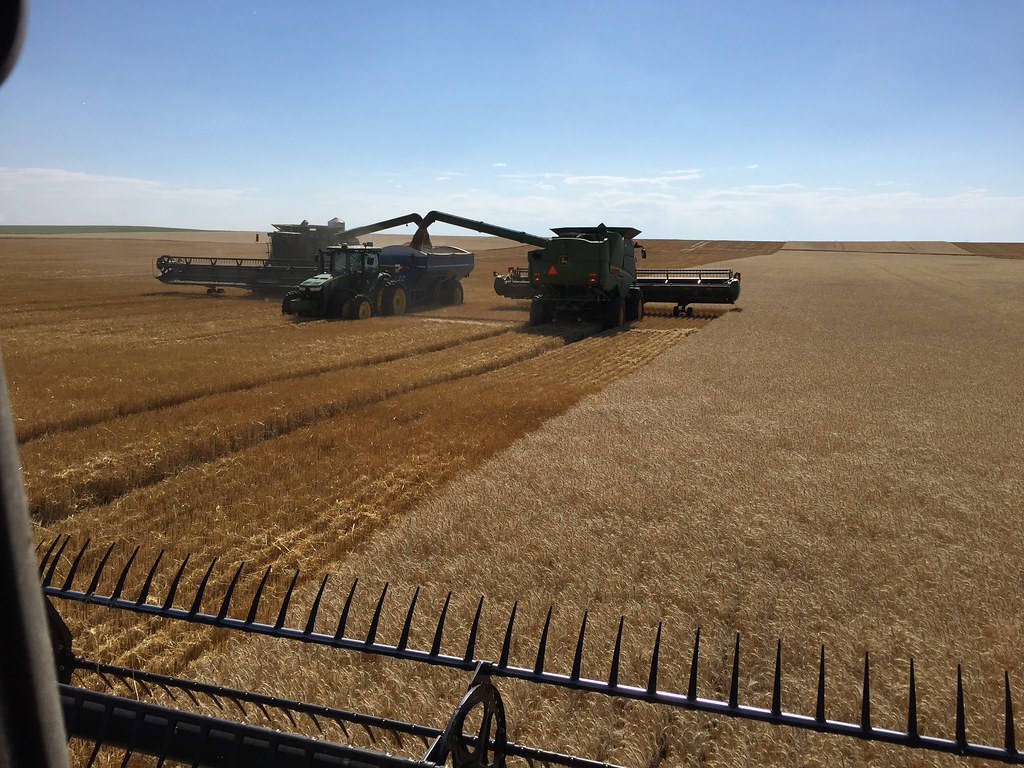 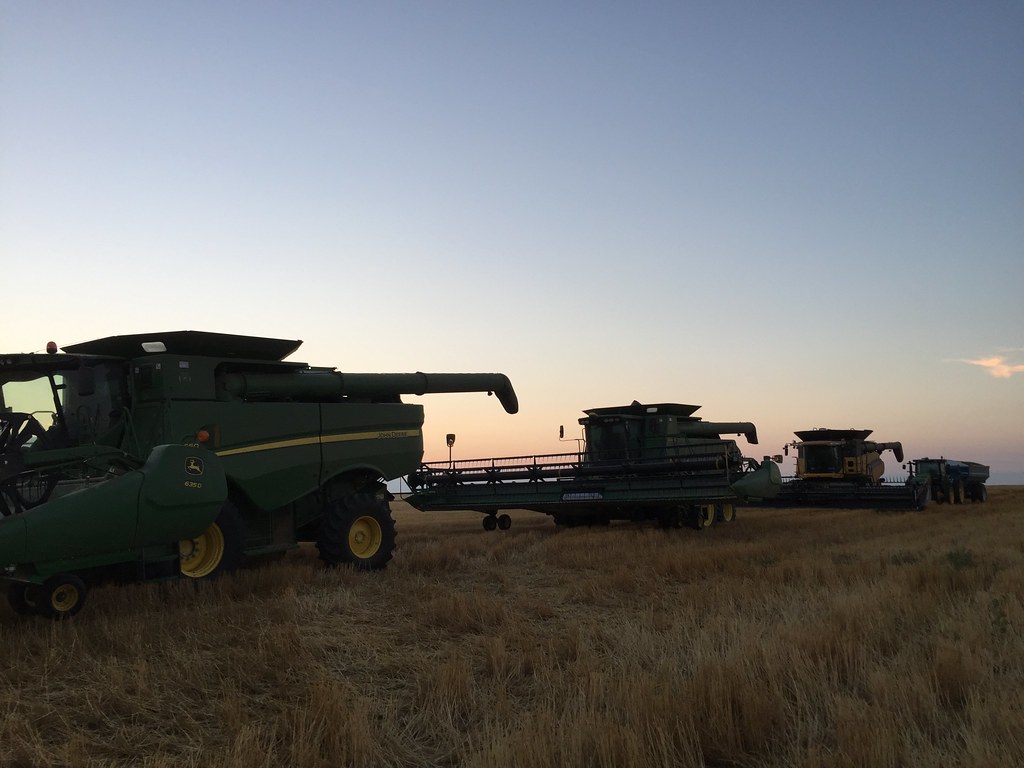 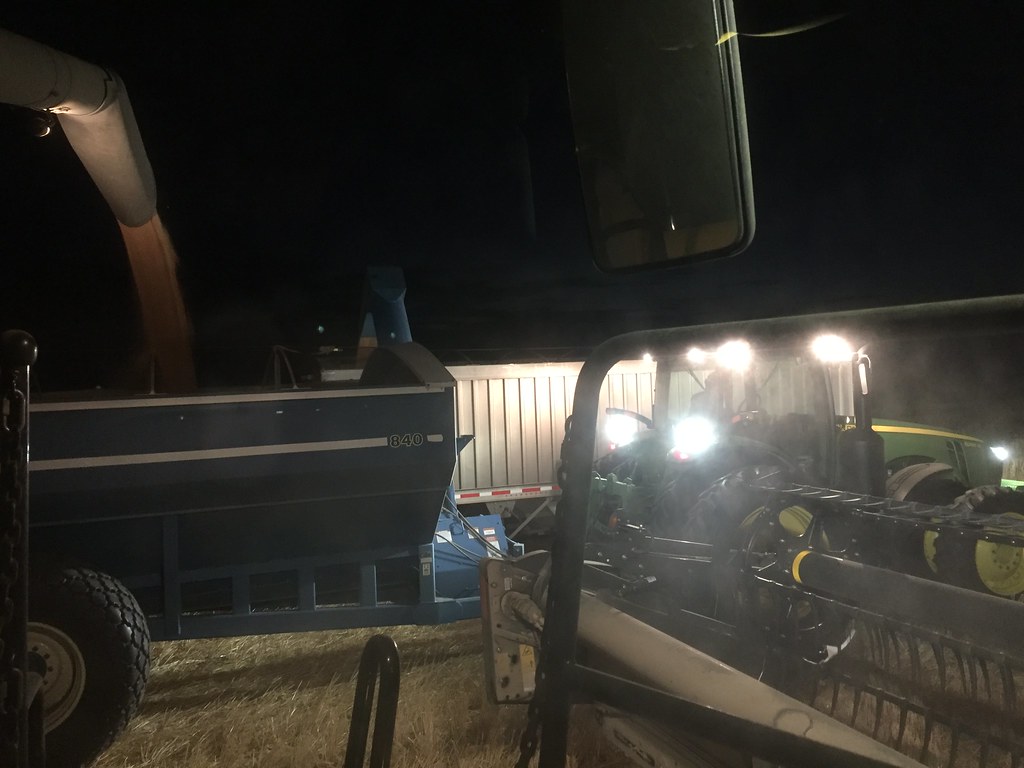 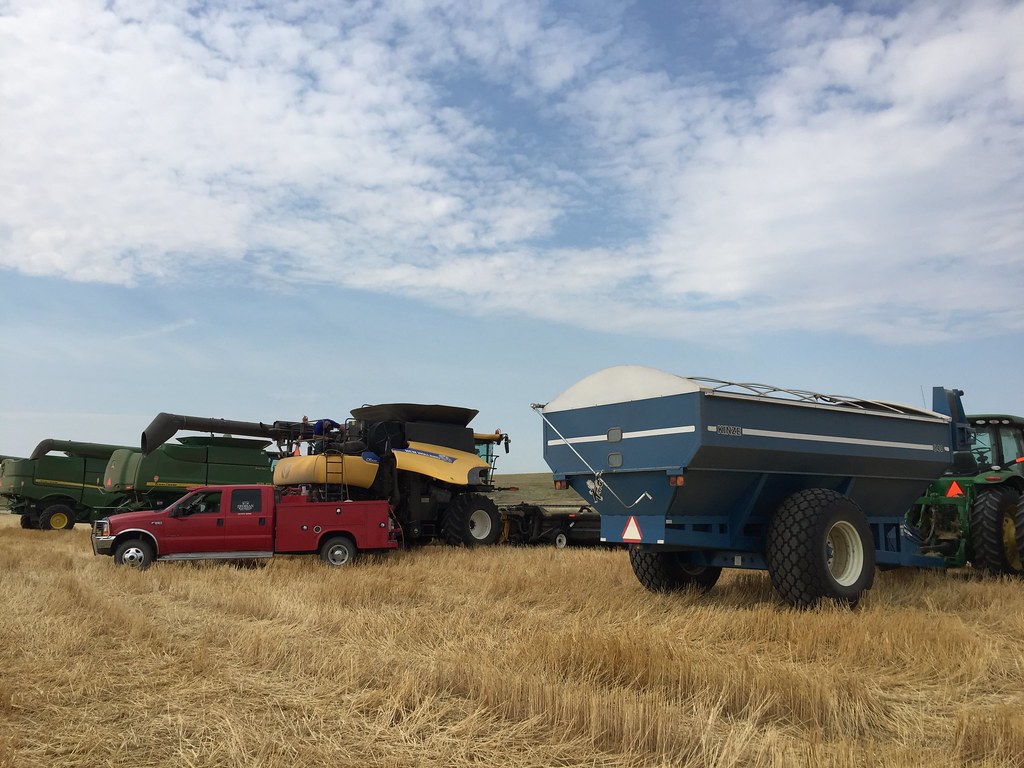 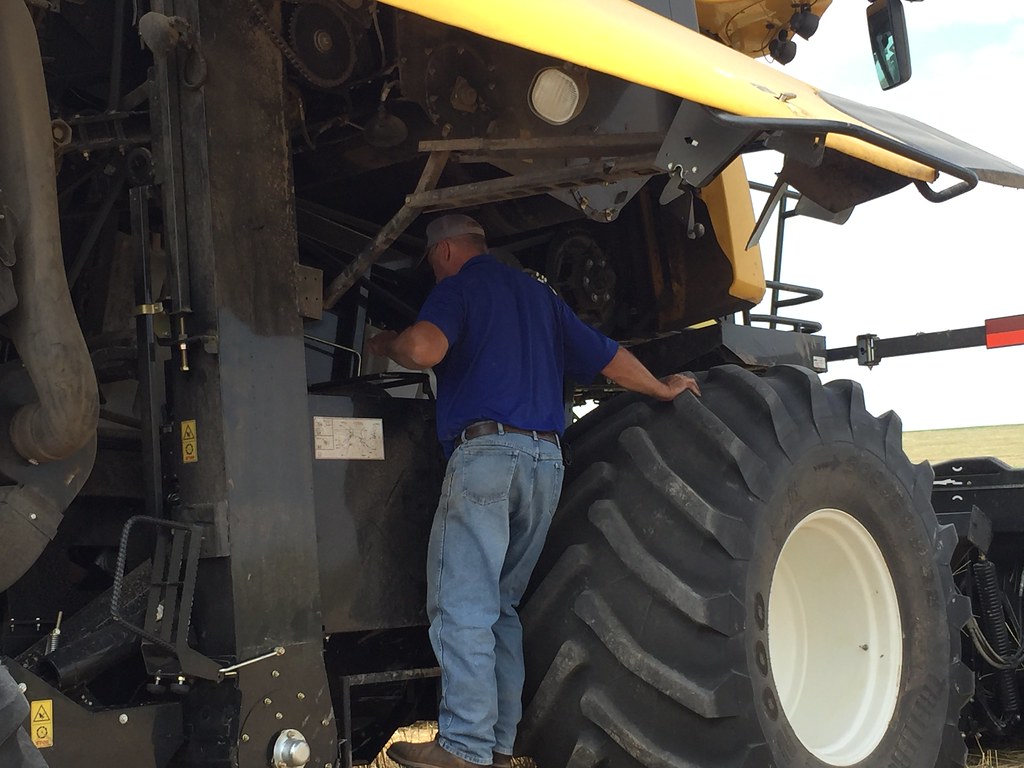 Did you catch the reference to “filling a bag” at the beginning of my story? Because of the once-in-a-lifetime yields in this area, the elevators filled fast and weren’t taking any more wheat. The grain bins on the farm weren’t going to be used because they needed to be empty for the millet harvest (late summer). What were they going to do? There was talk of creating piles on the ground, but no one was certain what would happen to the grain once it was subjected to the elements and critters (although there are piles all over the place). After much thought and discussion, it was decided that if the local elevator would allow them to use their bagger, that’s what they were going to do.

I didn’t get to see this process in action so I asked Jim if he would take pictures and video for me to share. I had all kinds of questions and I hope I can remember exactly what he told me. The truck unloaded the wheat onto a conveyor, which moved it to an auger, which filled the bag. The tractor was running (to provide power for the PTO) and placed in neutral so that as the bag was filling, it pushed the tractor ahead. Jim said the tractor would move 12 to 14 feet with each truckload of wheat. Each bag held 30,000 bushels of wheat—30 truckloads. By the time the harvest was complete, there were seven bags lined side by side. I’ve included a short video showing the process much better than I could explain it to you. By the way, thanks and photo credits go to Jimbo! 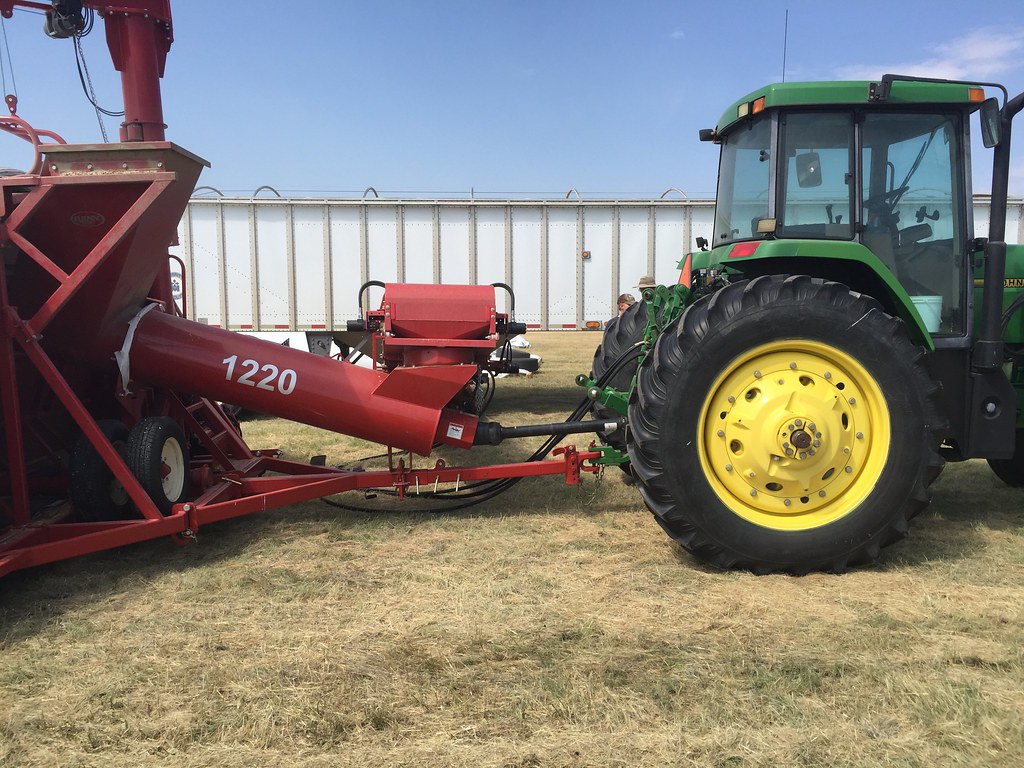 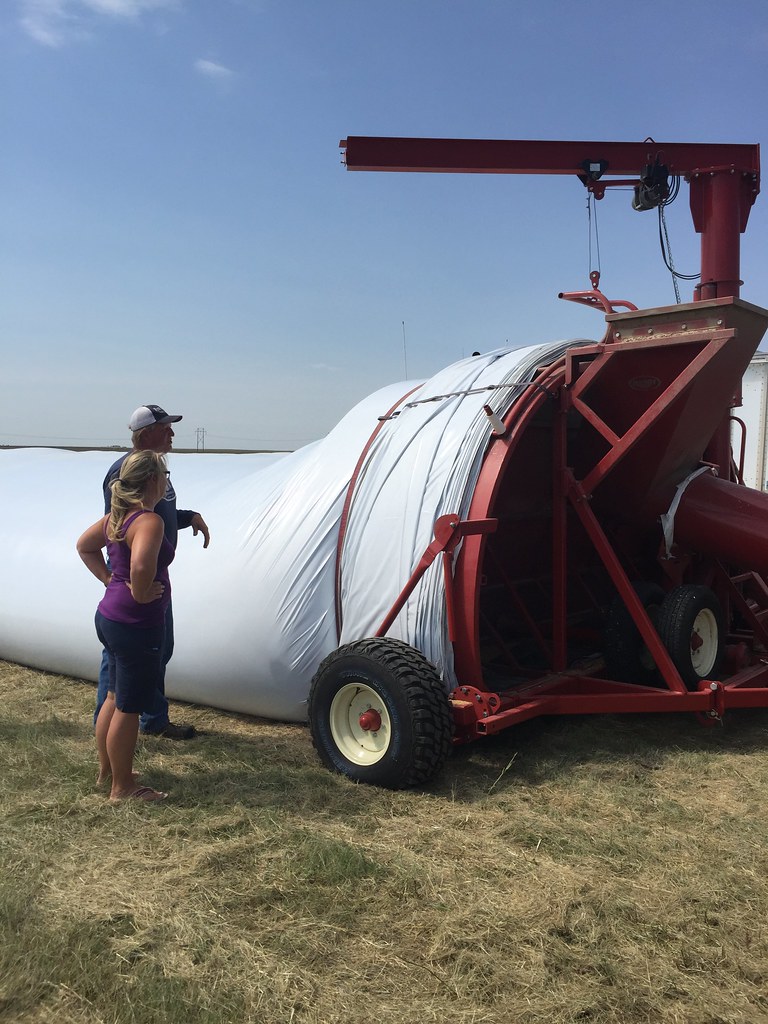 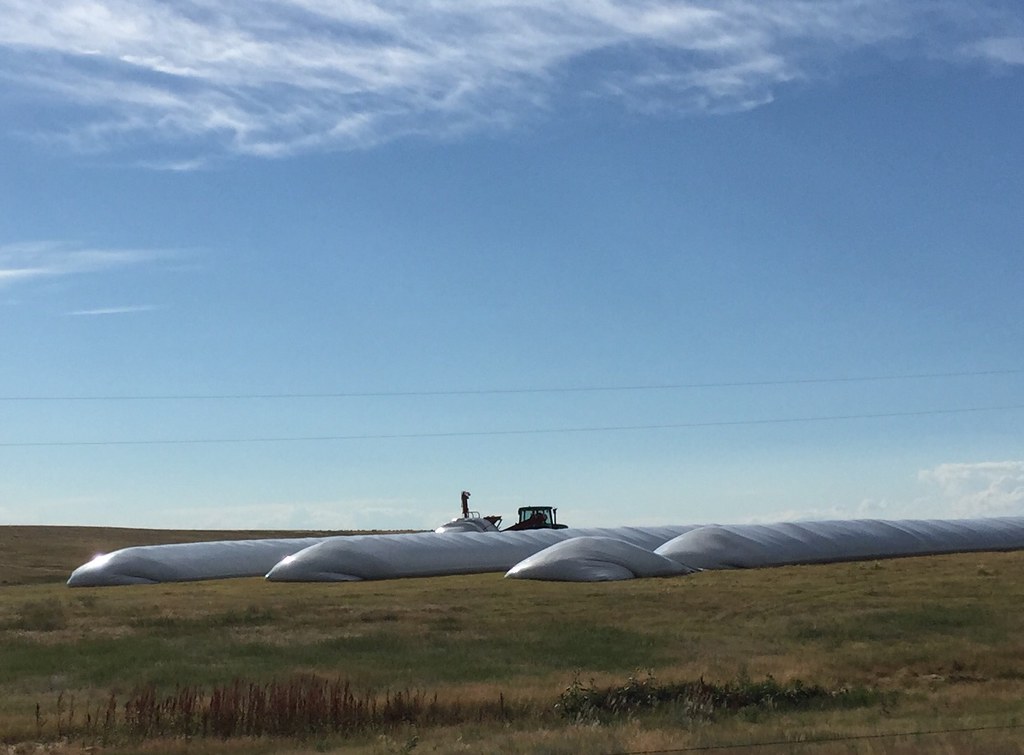 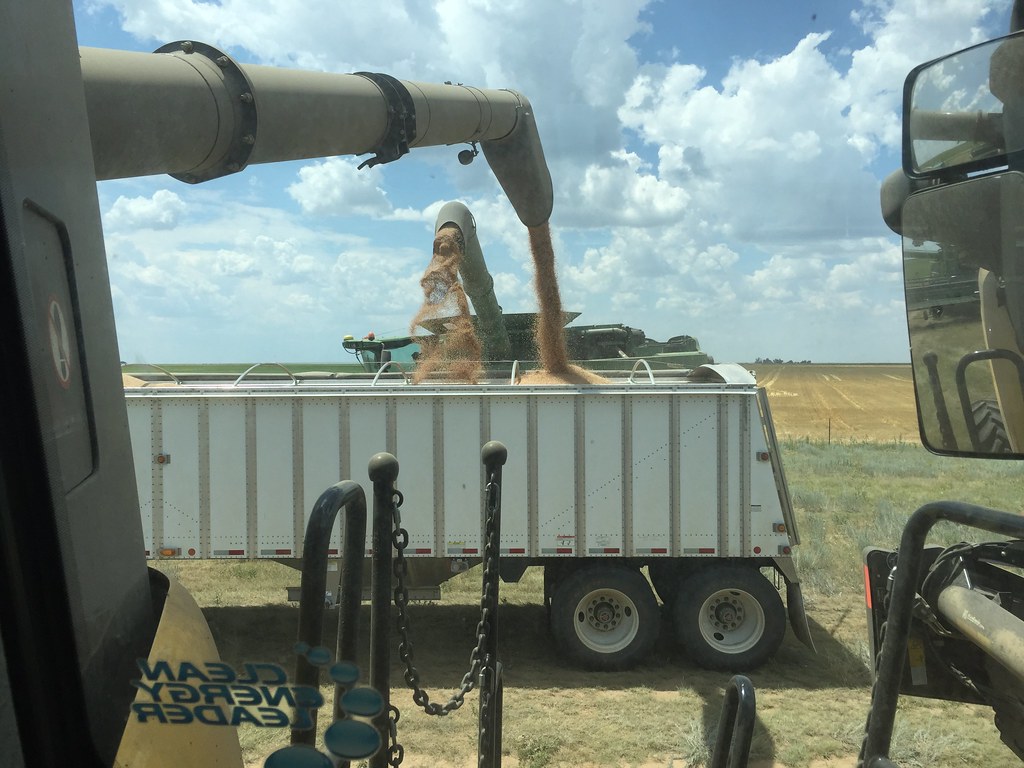 Unloading the last of the 2016 wheat crop into the truck. This makes me feel a bit sad! It’s the most anticipated part of the year and it’s always over before I’m ready.

So, after the field was finished, we still had quite a bit of the afternoon left. We started the crummy job of cleaning the header. At least on this day, it wasn’t as darn hot as the last time we did the job in Garden City! We had clouds and a good breeze.

We were nearly finished when Jim decided we needed to put it on hold and get the MacDon pick-up header ready to make the trip to Yost Farm Supply in Goodland, Kansas, for updates. This had to be done before we can take it to “The Valley” for the barley harvest. The hardest part of this job was getting the header trailer on the car trailer. Jim didn’t want to have to worry about the header trailer’s wheels and bearings while travellng on the highway so he felt the easiest thing to do was what he did. 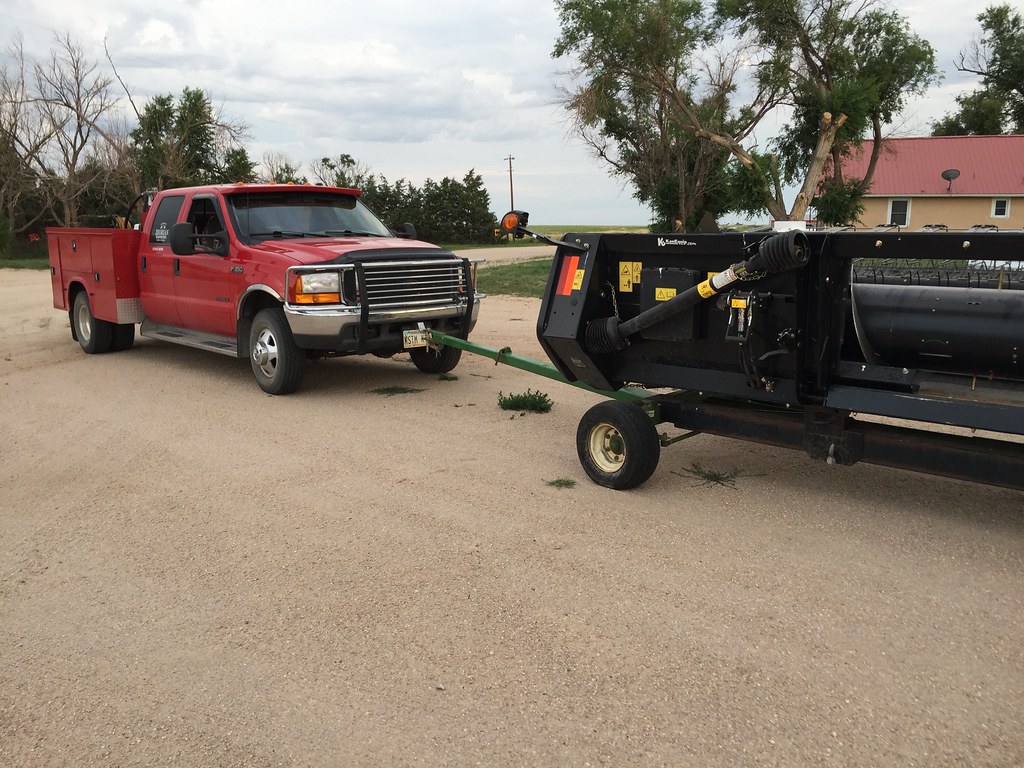 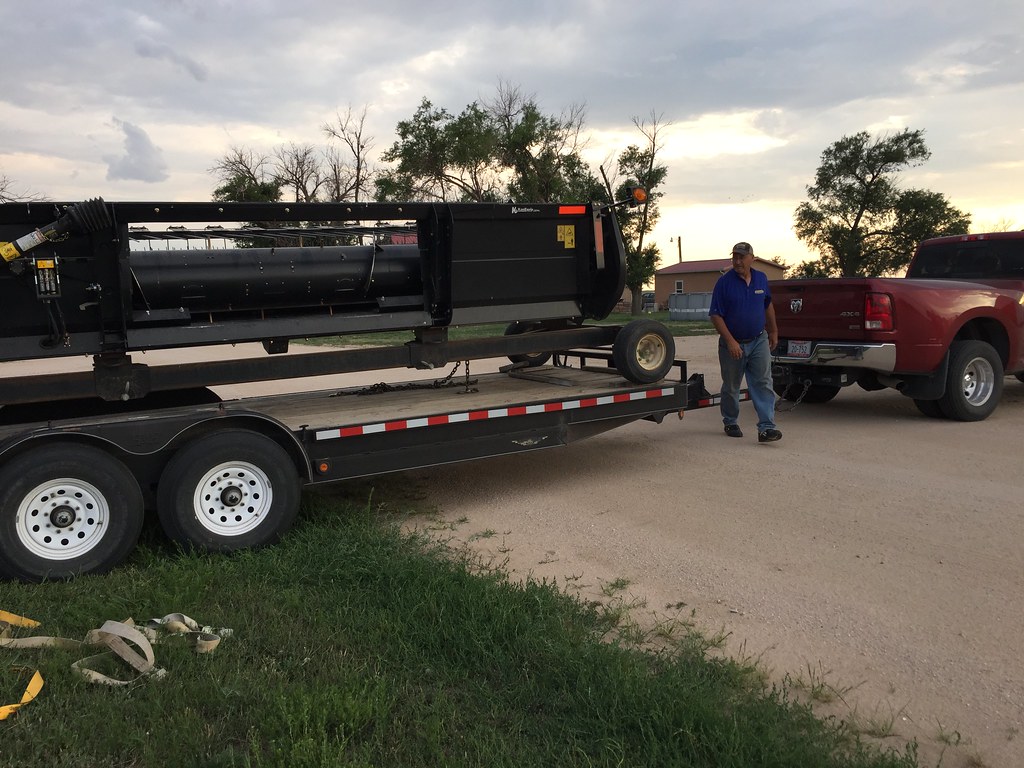 Today (Wednesday), we made the trip to Goodland and back. We also had 11 days of laundry that needed to be washed. Spending $4.75 for a washing machine that’s on for 23 minutes is a rip-off! Of those 23 minutes, 10 of them are in the wash cycle—10 minutes to wash grease, grime and field dirt from clothes. Not nearly long enough! I certainly hope my washing machine works at the next stop. 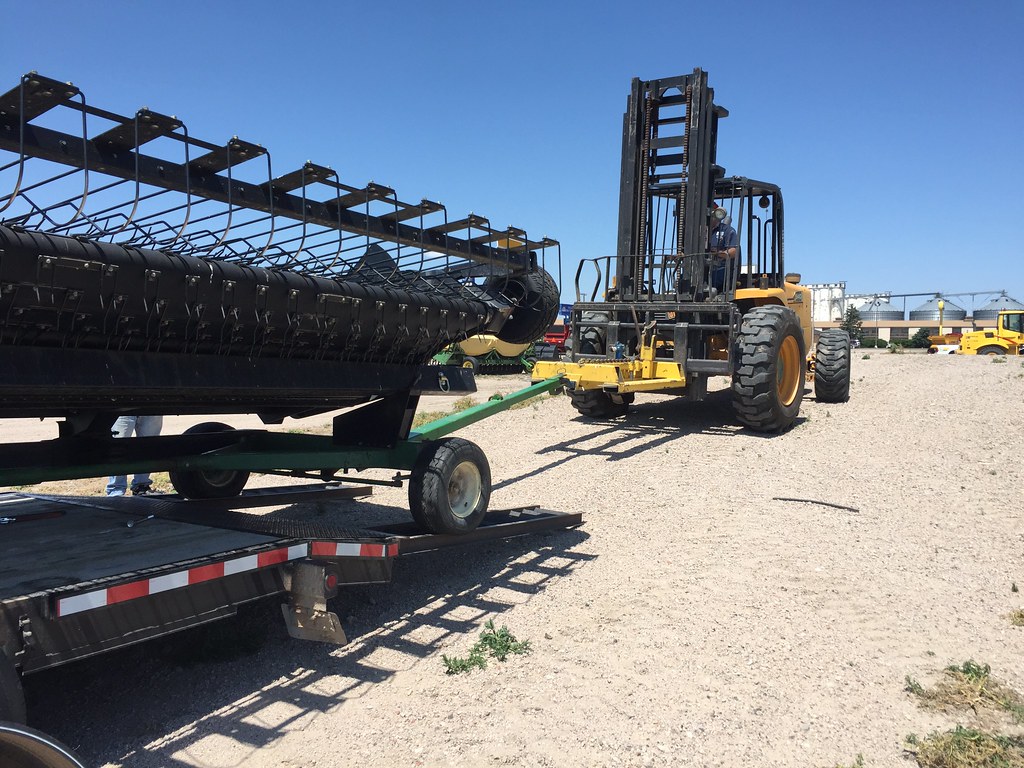 Next on our schedule? To get truck maintenance done and equipment cleaned for the move to “The Valley.” We’re hoping to have the first load headed over the mountain pass this weekend. I’m anxious to see something new. I’m told it’s beautiful where we’re going and I do look forward to seeing the mountains! New adventures on the horizon…