All Aboard Harvest | Tracy: The Harvester’s Motto
14397
post-template-default,single,single-post,postid-14397,single-format-standard,qode-quick-links-1.0,ajax_fade,page_not_loaded,,qode-title-hidden,qode-theme-ver-11.2,qode-theme-bridge,wpb-js-composer js-comp-ver-5.4.7,vc_responsive

Claude, Texas – We’ve made two test cuts within the past couple of days (6/8 and 6/9). The first result was 20 percent and the second (which was just Thursday) was 17.2 percent. It was 60 degrees this morning. Needless to say, I grabbed the sweatshirt as I headed down the steps to make our morning coffee. Great conditions for humans living in a trailer house but not good wheat cutting weather!

Jim’s been tinkering on trucks and the Yellow Beast – mostly just to stay busy (I think), but I know there were some things he put off at home hoping he’d have some time before we got started down here. After taking the first test cut, he realized he had a minor issue with the air conditioning in the combine, so it meant a trip to the New Holland Harvest Support trailer. And… a good excuse to hit the Amarillo Walmart.

It was good to see Monte and Carolyn, and we had a nice visit. Apparently, we stood outside long enough that we all had some sunburn to prove it. As usually happens, other harvesters show up and there’s even more cutting done (who even needs a combine?). 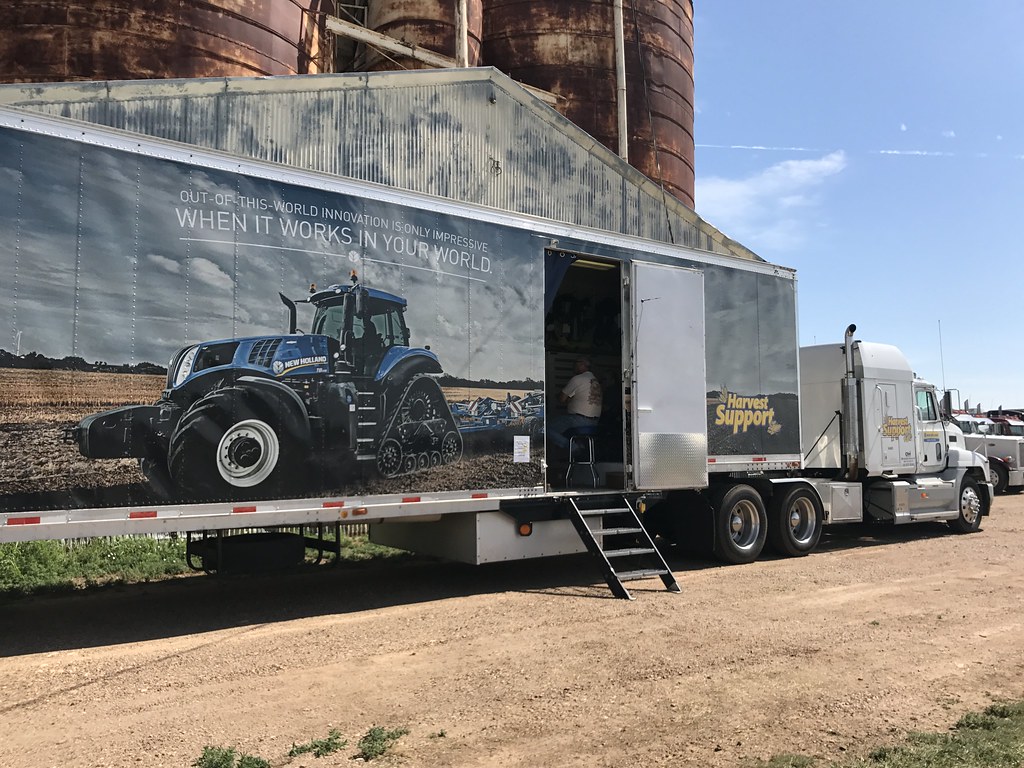 The New Holland Support Trailer is closer to us this year, and boy is that nice!! They brought it just west of Amarillo. Thank you, New Holland!! 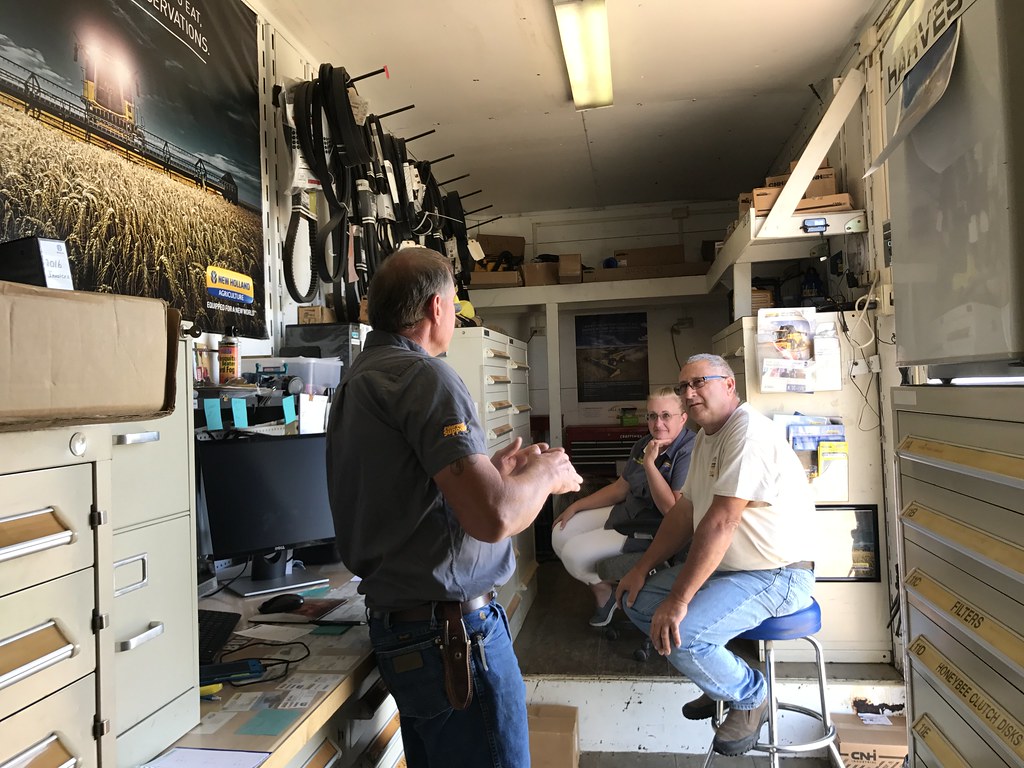 Inside the NH harvest support truck.

Monte and Carolyn Ahrens are in charge of the trailer. 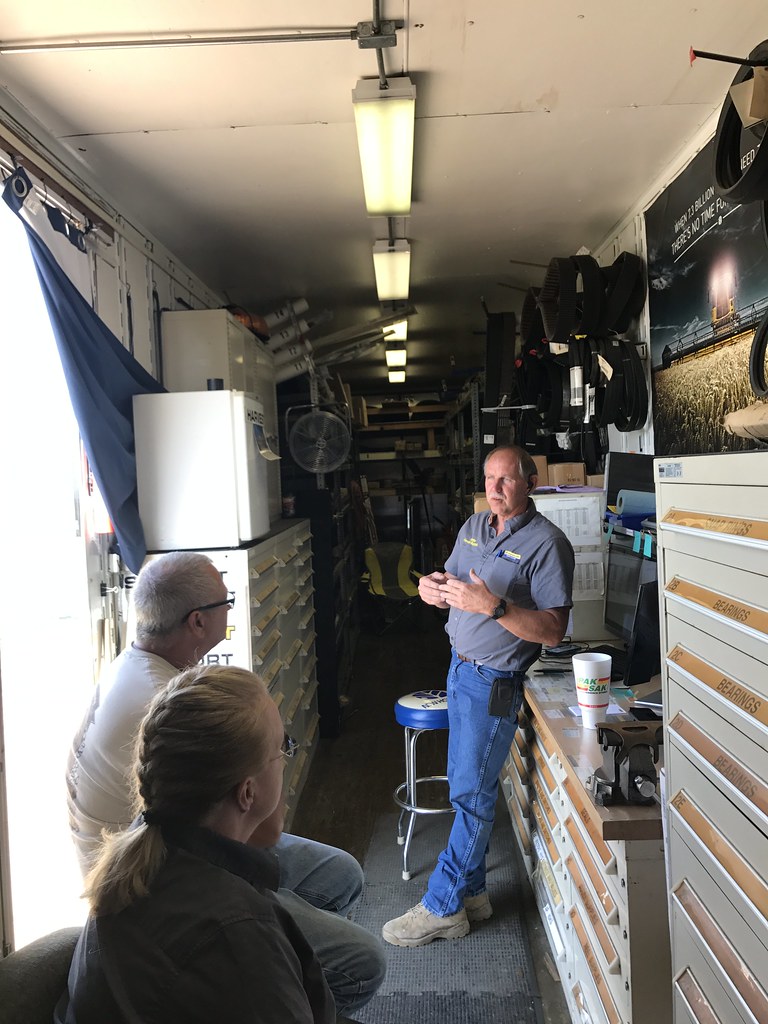 Monte, Carolyn and Jim inside the NH Support truck. 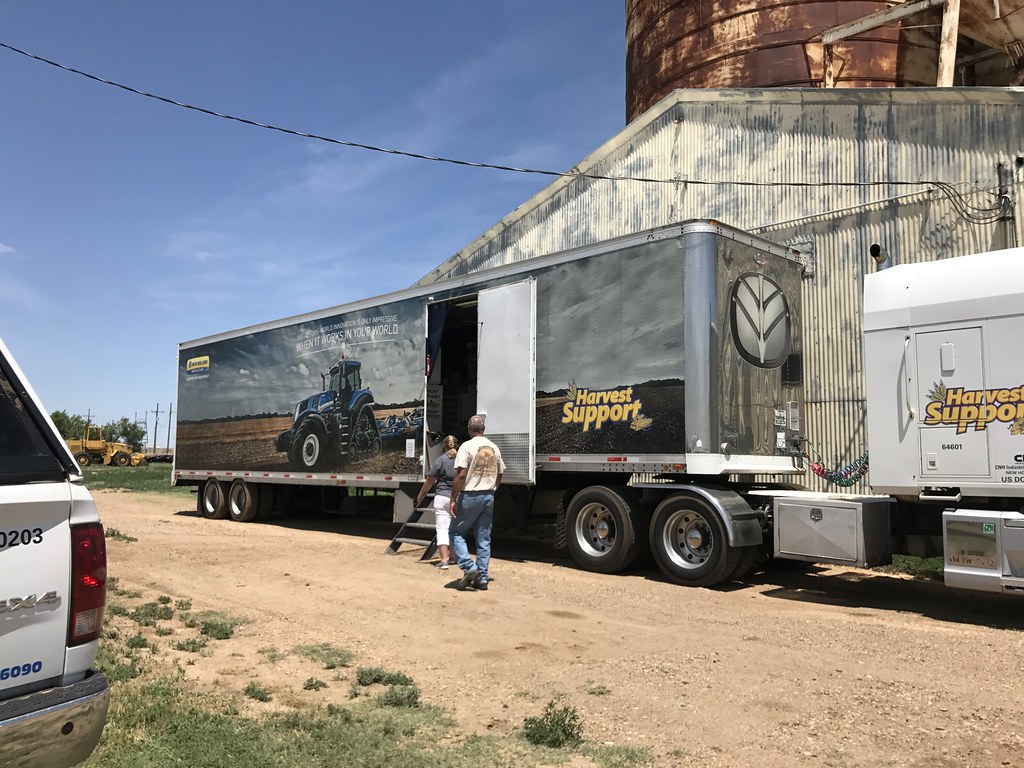 Jim and Carolyn headed back to the trailer to get the part we came after.

We made our Walmart stop, got a quick bite to eat, and headed back to camp. Jim replaced the part and it was decided that we’d sample another field. That’s when we found out it was still 17.2 percent. We thought we’d try another field on the way back to the yard but found the gate locked. Jim decided it was just as well as the radar was showing a red cell headed our way. So, we got it all parked and headed back to camp. And the radar was right except that we lucked out! The worst of the storm stayed west of us as it made its way further south. We got some rain but none of the nasty wind and hail that Amarillo had. Thank goodness! 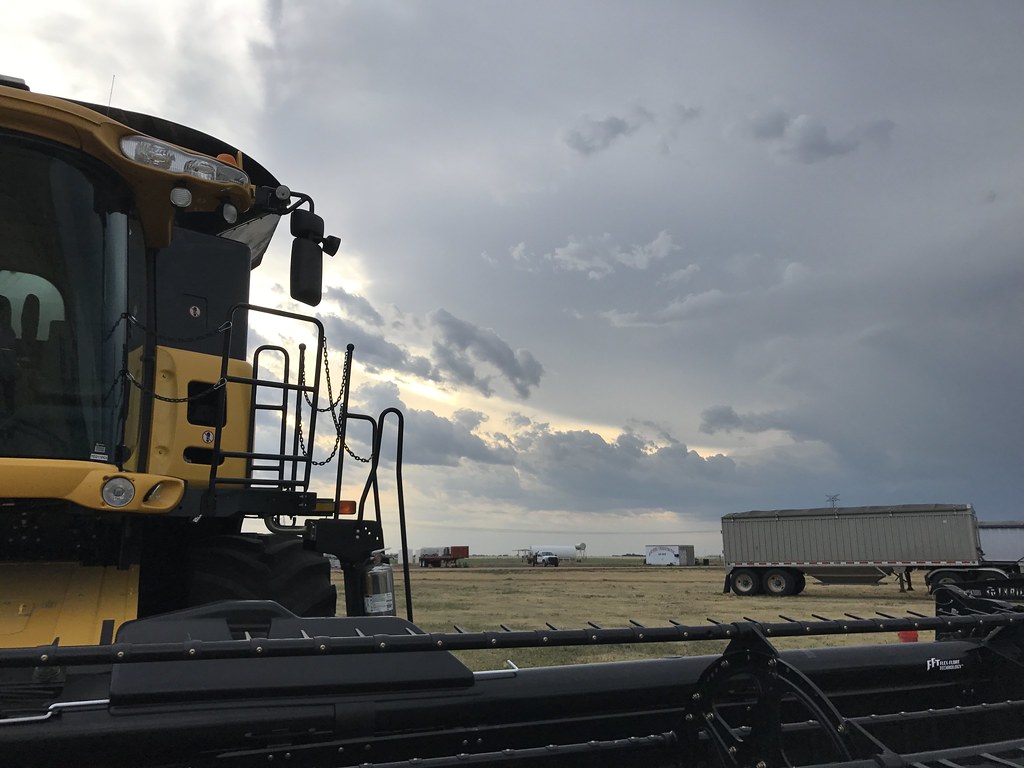 Clouds rolling in just as we were getting the Beast parked again. 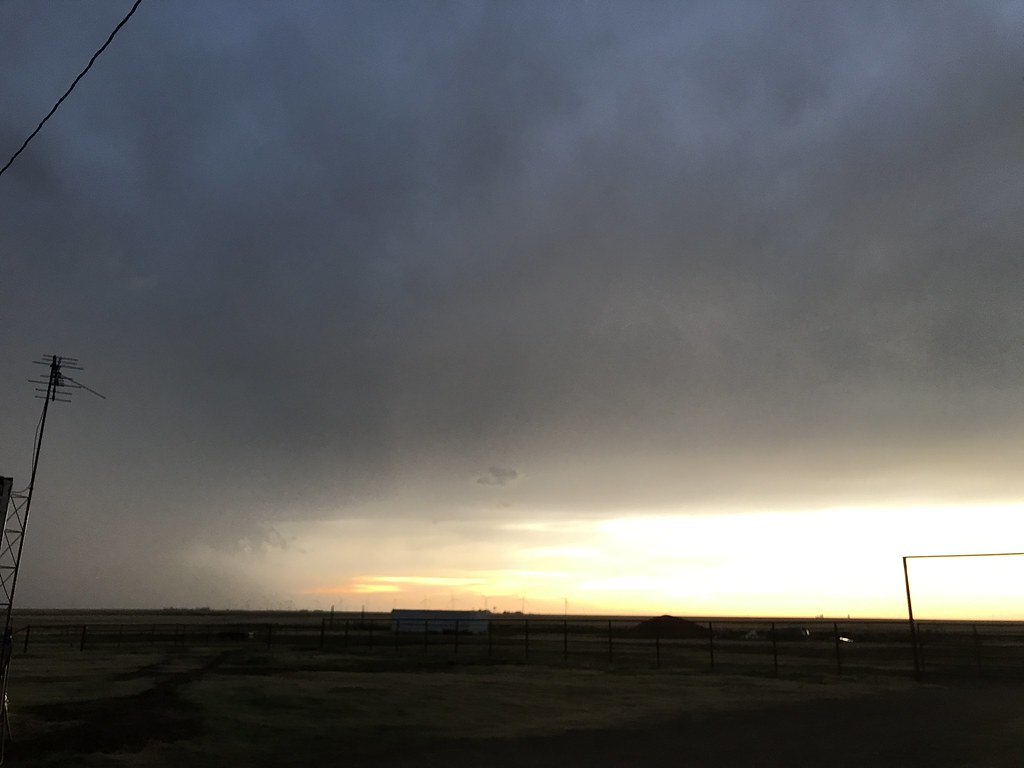 Prior to the storm. 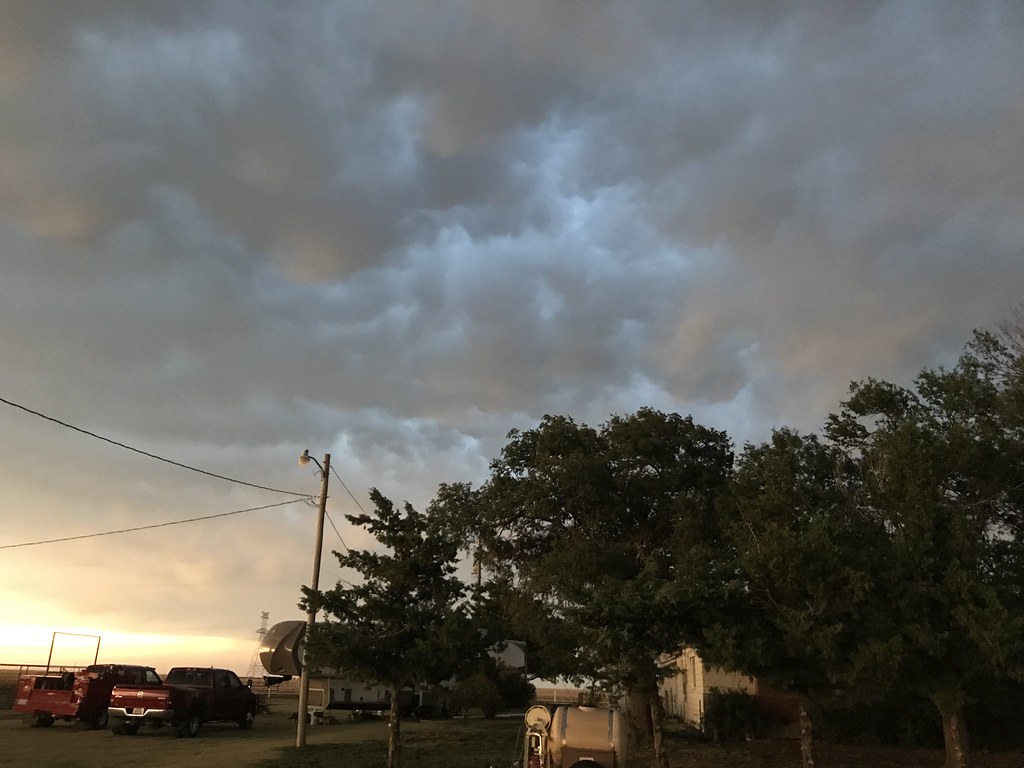 Also prior to the storm.

So, now you’re probably wondering what the “Harvester’s Motto” is? I’m certain most of you already know but in case you don’t, it’s “hurry up and wait.” That’s what we’ll be doing for a few more days. The forecast is HOT (in the 100’s) and windy (40 mph). That ought to make things happen around here! 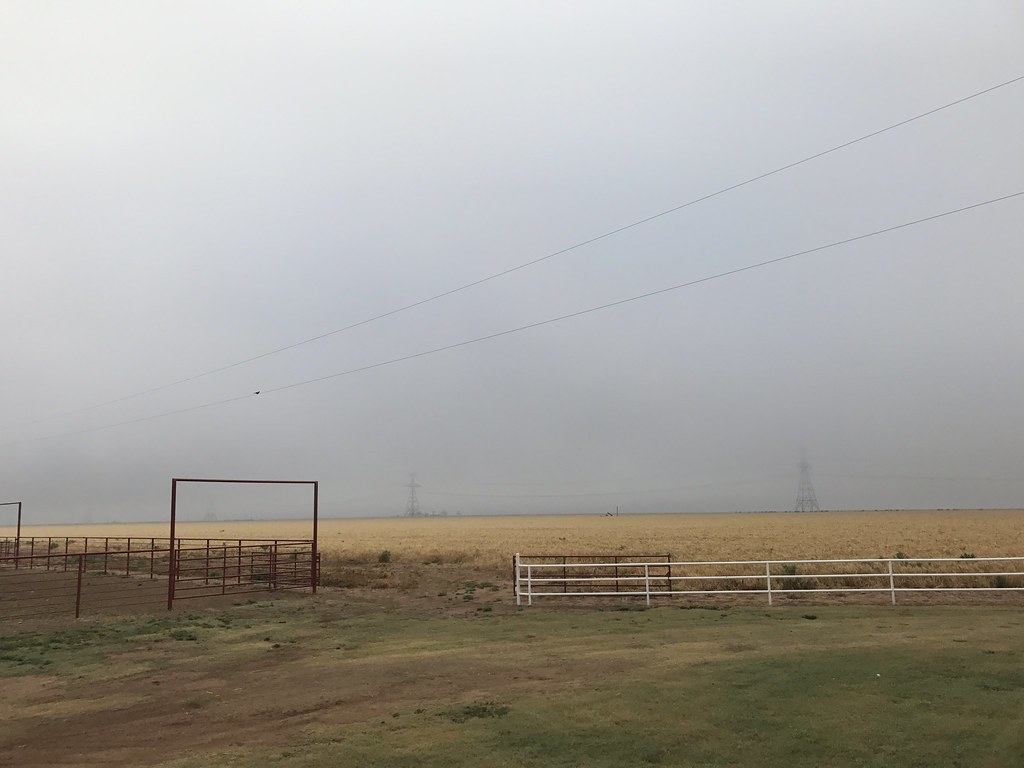 A cool and foggy morning – taken from the door of our trailer house. Not good drying weather!