All Aboard Harvest | Tracy: A much slower-paced week
18272
post-template-default,single,single-post,postid-18272,single-format-standard,qode-quick-links-1.0,ajax_fade,page_not_loaded,,qode-title-hidden,qode-theme-ver-11.2,qode-theme-bridge,wpb-js-composer js-comp-ver-5.4.7,vc_responsive

22 Aug Tracy: A much slower-paced week

Jordan, Montana–It’s been a very slow wheat harvesting week! Showers have plagued us since Aug. 9.

I’m not sure how much rain we’ve had but if I were to guess, I would guess maybe three inches. It didn’t come all at once. It’s just been throughout the week in small increments. The temperatures have remained on the cool side with lots of clouds. The past week has felt more like autumn than summer.

Curt, Jamie and the kids made it back home early afternoon on Tuesday. That same day, we had been invited to meet Bruce and Leigh Krumbach in Miles City for the day. Miles City has a couple of antique shops, which we walked through. We had Mexican food for supper, grabbed a few “must haves” from Walmart and headed north before it got too dark. Whatever you do with friends, it’s always a good time … even if it’s just a trip to Miles City.

As we were leaving Jordan, I was talking to Jamie on the phone. I told her, “Isn’t it interesting when you get up here, you just ‘go to Miles City.’ You don’t even think about it being a 160 mile round trip.” It’s a completely different mindset once you get here. I would like to convince Jim to go to Billings but that might take some real work. Maybe I’ll save that extra energy for a suggestion to make a quick trip to the mountains before we head home.

On Wednesday, we had to see where we were for moisture. We hadn’t been back to the field since we left it on Friday evening. We got all the pieces in place and Jim did a moisture run. He said it was dry–the moisture tester was showing 11 to 12 percent moisture. I jumped in the machine while he took the service truck to get the Pete. I was seeing 15 to 16 percent moisture and made the management decision to shut everything down. When he returned, he took another sample. It also showed higher moisture than we like to cut. By the time we were done sampling, Frank was about two-thirds full. We tarped the truck and took it to the farmer’s yard for the night. 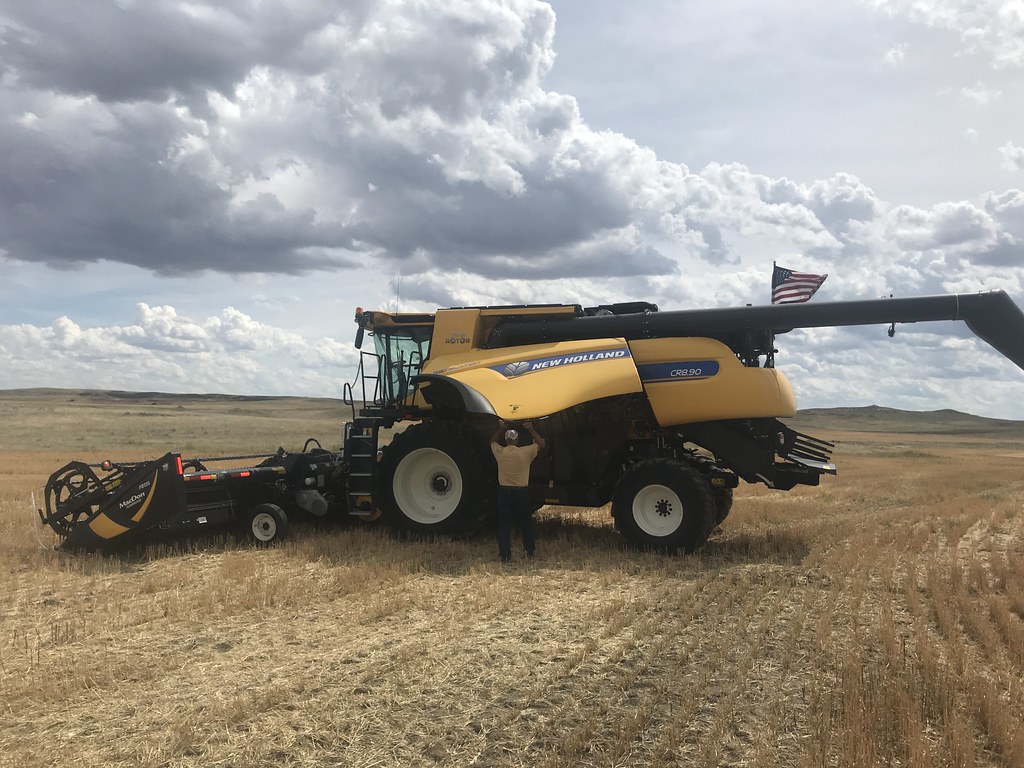 Checking it over and making sure there’s no raccoons hiding in a corner before starting it up again after so many days of being away. 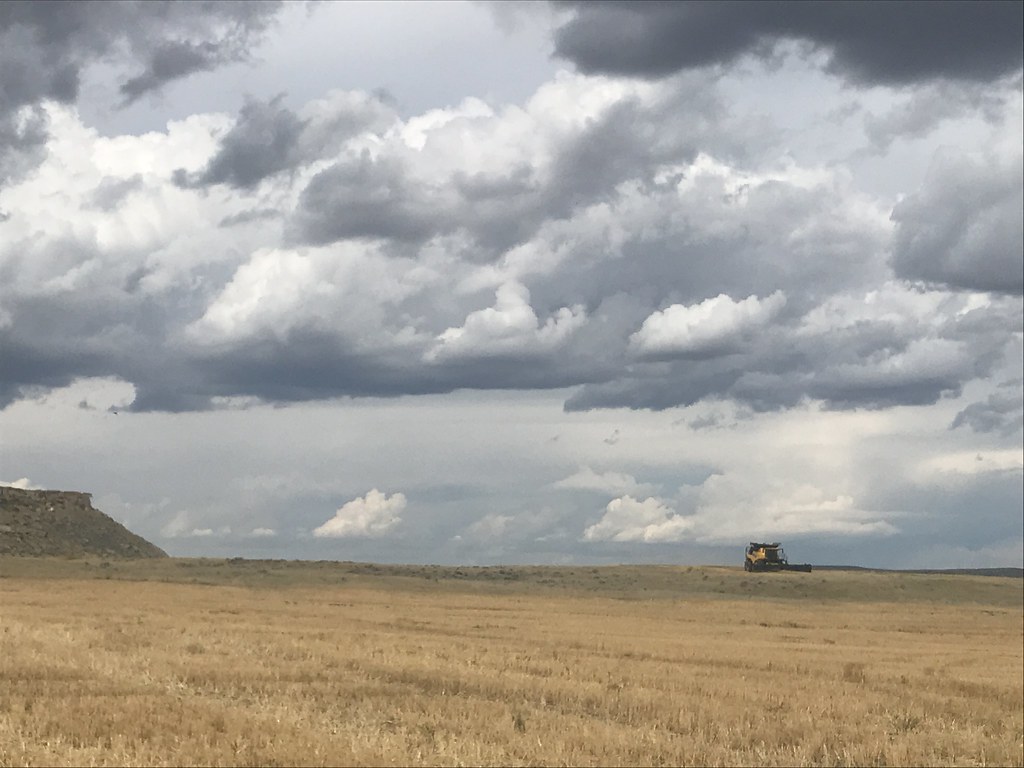 Now you can see why they call it Big Sky country! 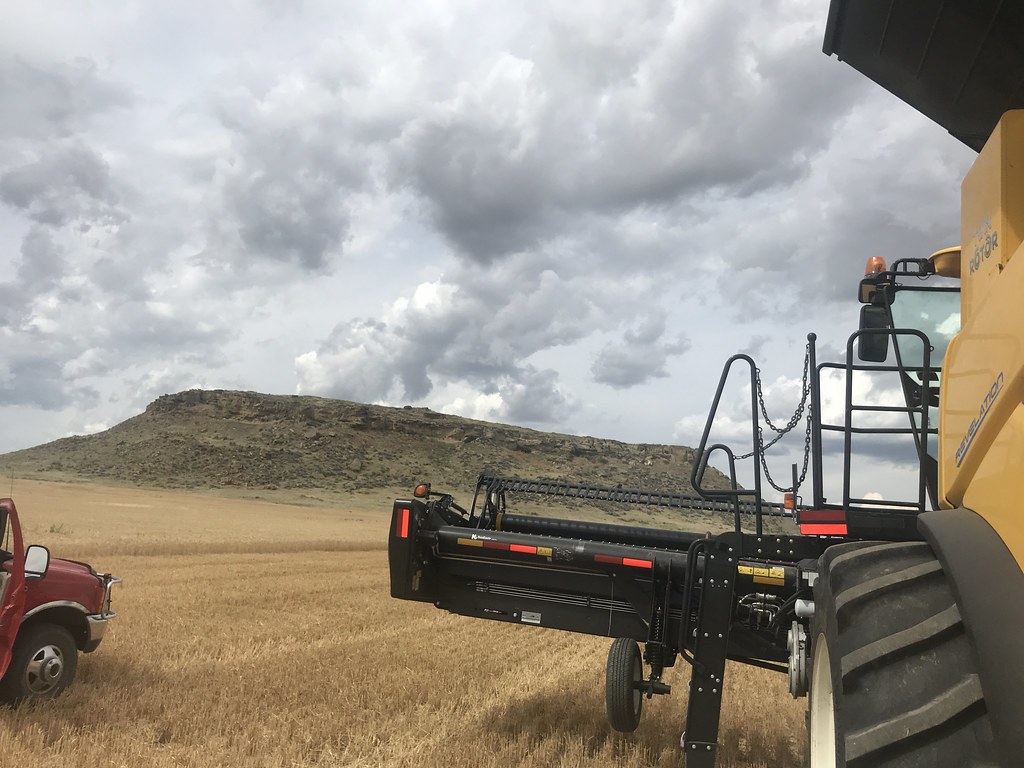 Waiting for Jim to return with the Pete. 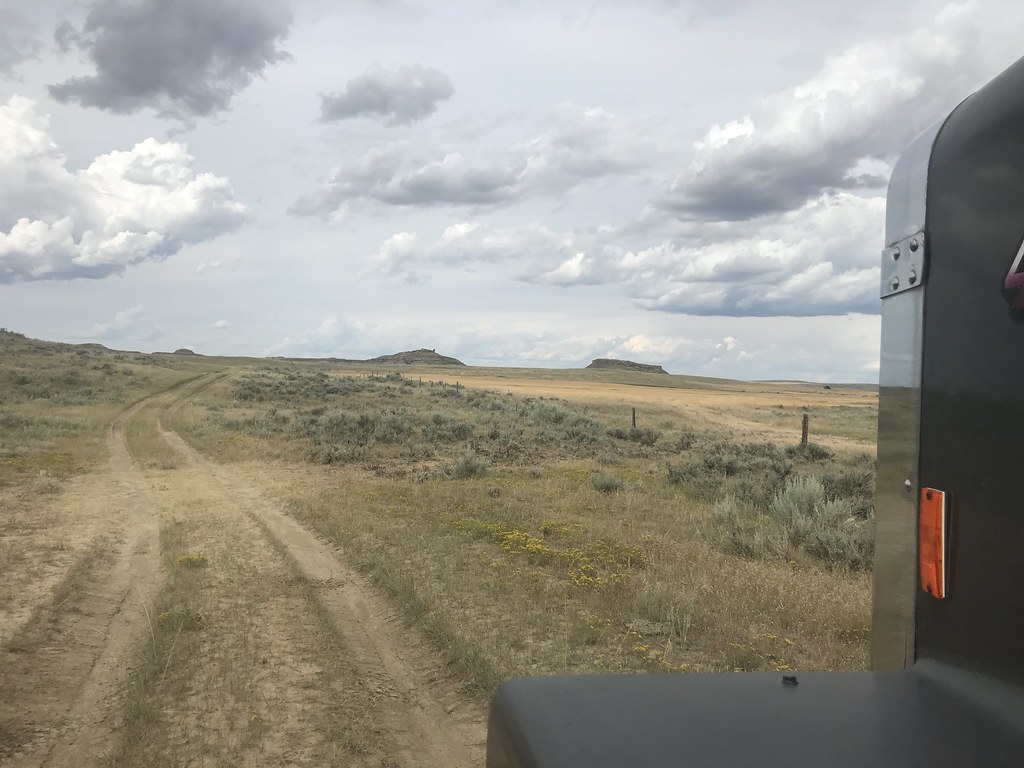 Easing Frank along the dusty trail. 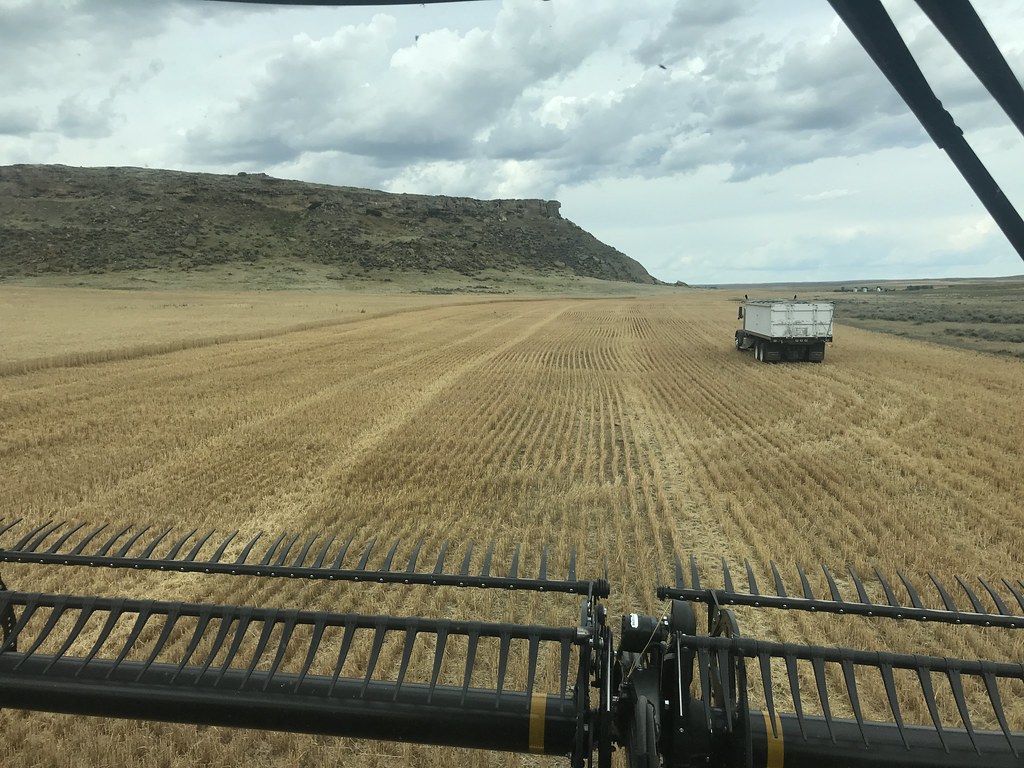 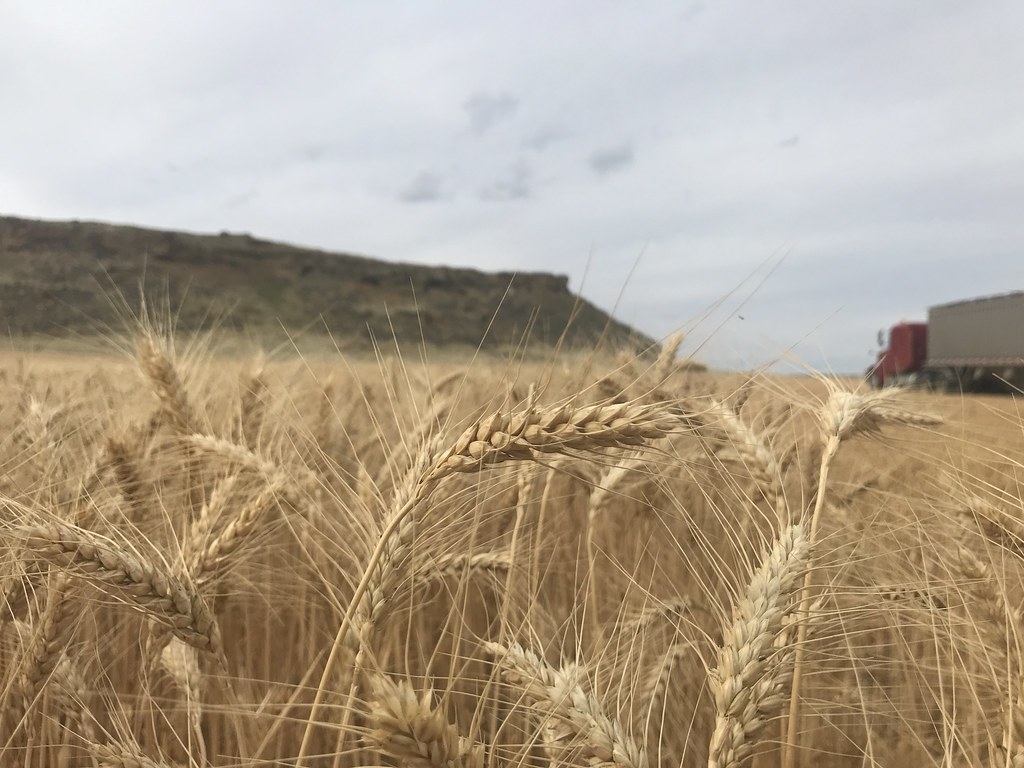 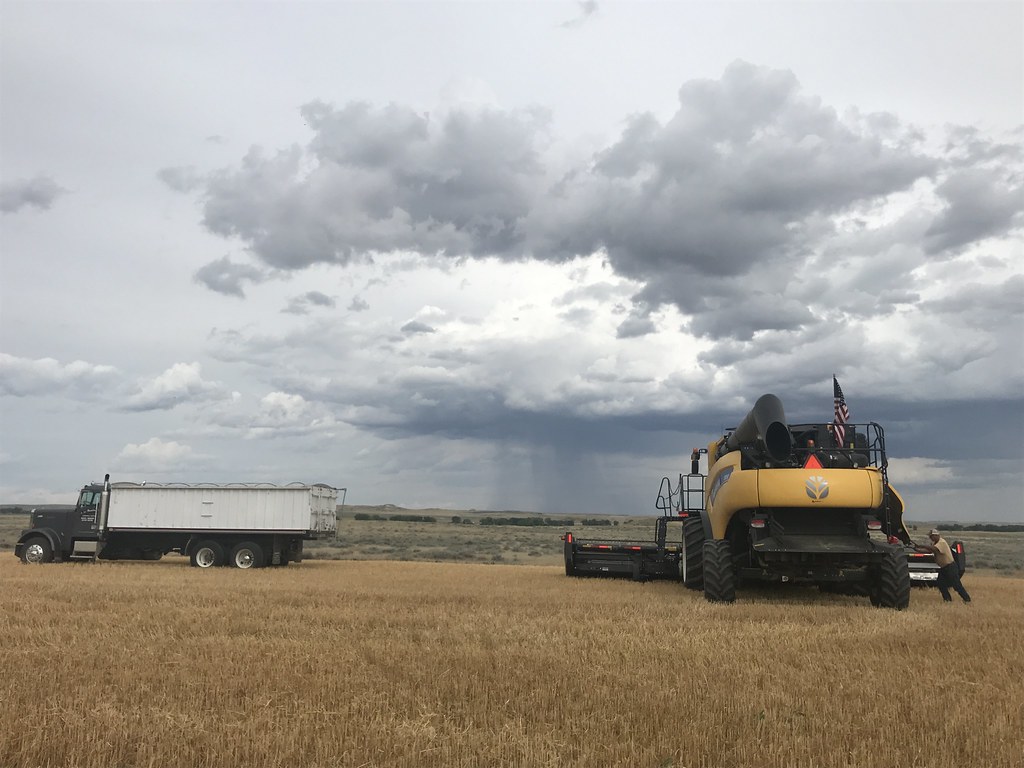 Making some adjustments before taking the final test cut for the day. 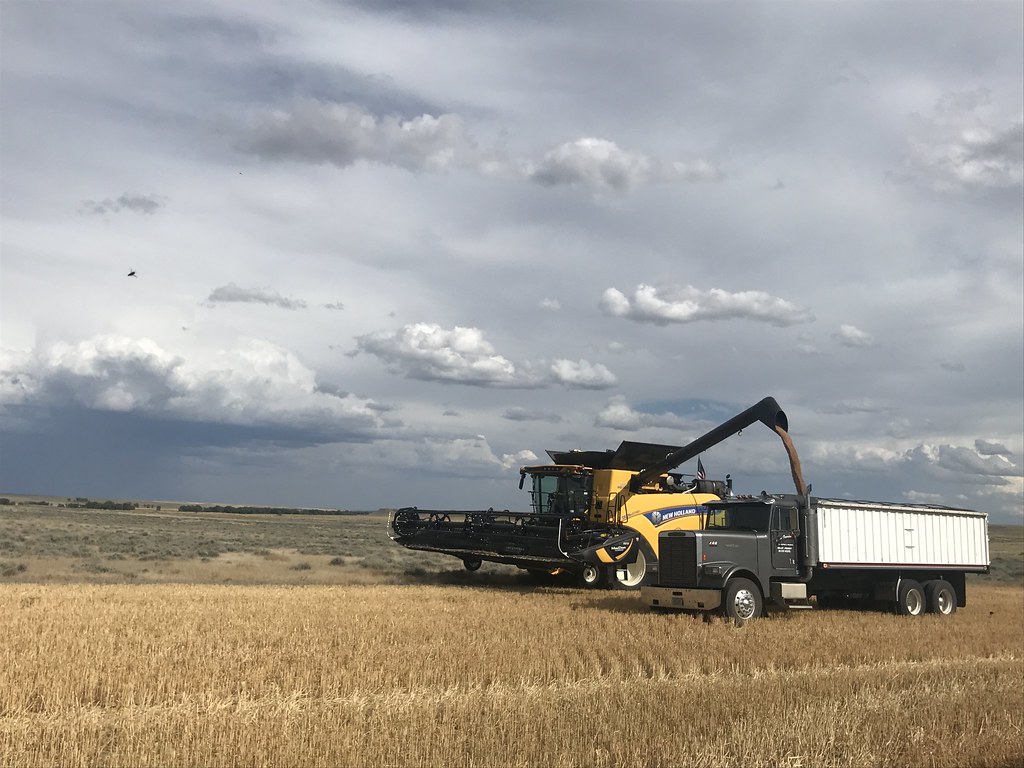 Clouds on the horizon and the final dump is made on Frank for the day. 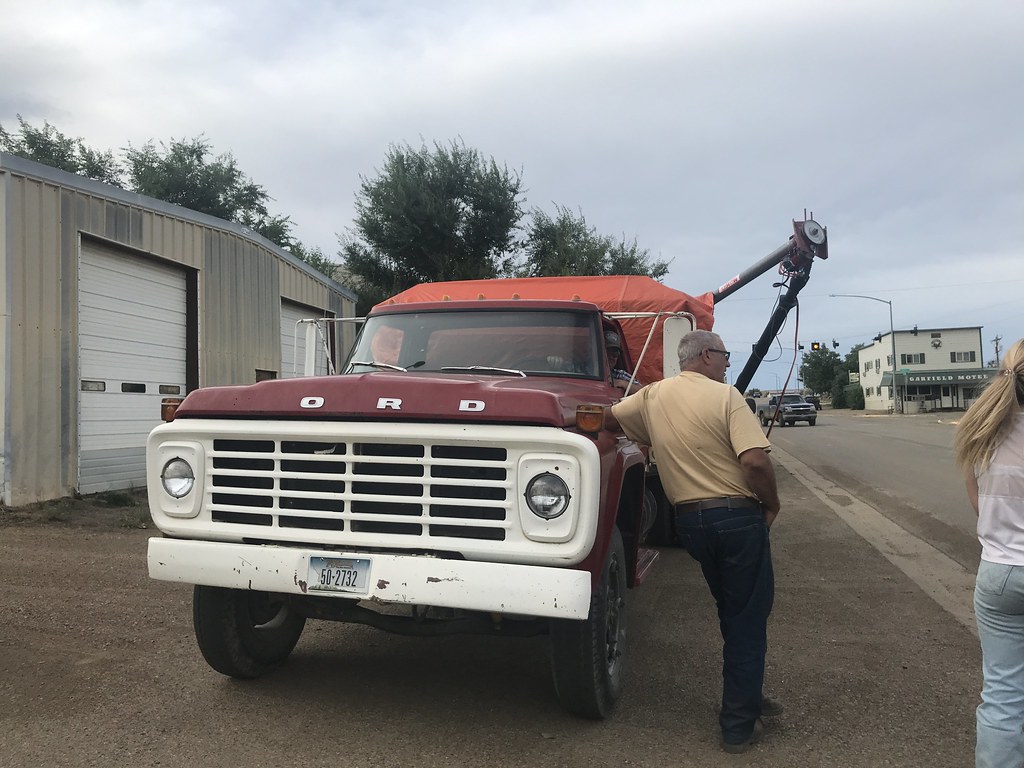 While making our way back to town, we happened to see “Henry.” Henry was one of our very first trucks purchased after deciding to make a go at this crazy life. Henry, a 1973 grain truck, was brand new when my grandpa purchased him in 1974.  Grandpa let us borrow the truck until we could afford to purchase it from him. Between my grandparents and us, Henry made lots of trips to Montana with the harvest run. Tom bought Henry from us quite a few years ago so when I saw it making its way to town and then stop, I had to jump in for old time sake. It was like seeing an old friend again. So many memories came flooding back. I could see my grandma in the driver’s seat. The smell of the mixture of oil and gas made me feel like a kid again. I was driving Henry the day before Callie was born and again when she was a week old. Crazy how a vehicle can become a part of who you are!

The next day, the farmer decided we could cut about 3,000 bushels of the higher moisture wheat and put it in a bin with air. We also cut a semi load and sent it to Moore. The grain ticket showed the moisture was a bit higher than the elevator would have liked but they did take it. 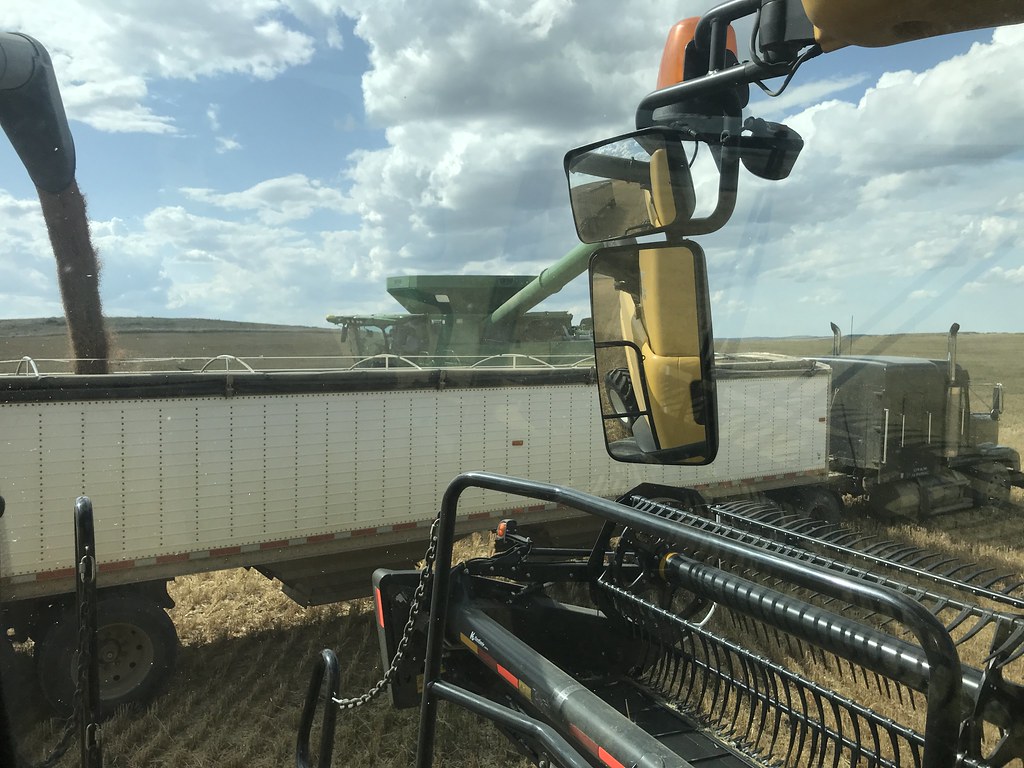 Filling the semi headed to Moore. 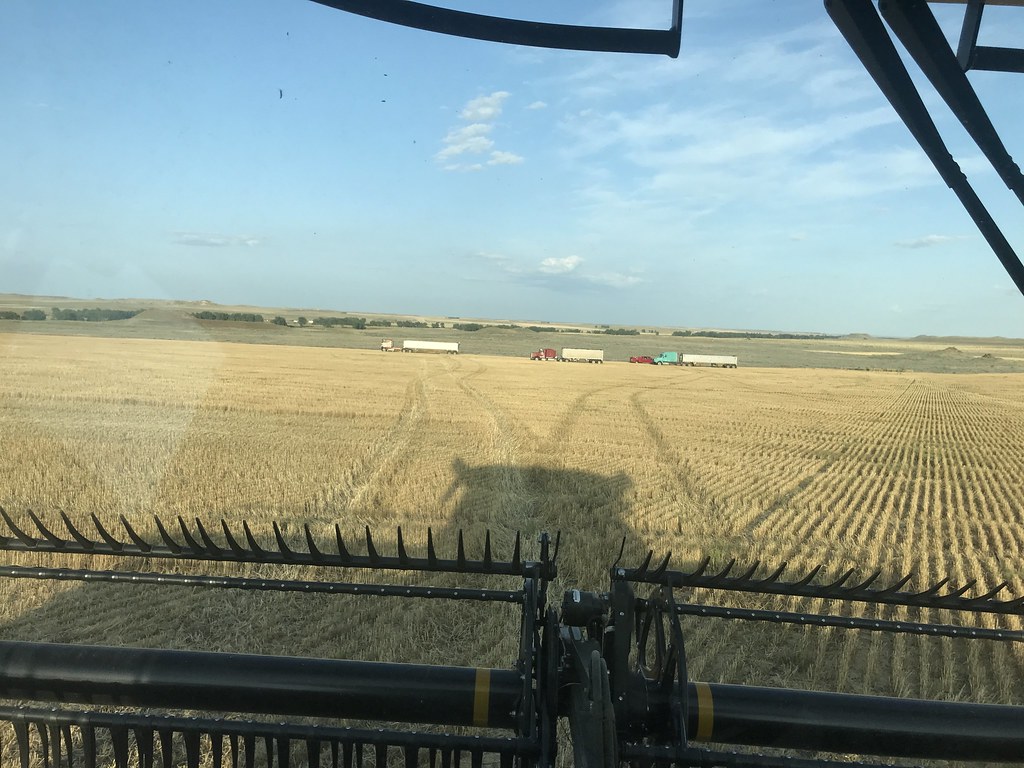 When these trucks are filled, we’re done for the day. The higher moisture limited the number of bushels cut for a couple of days. 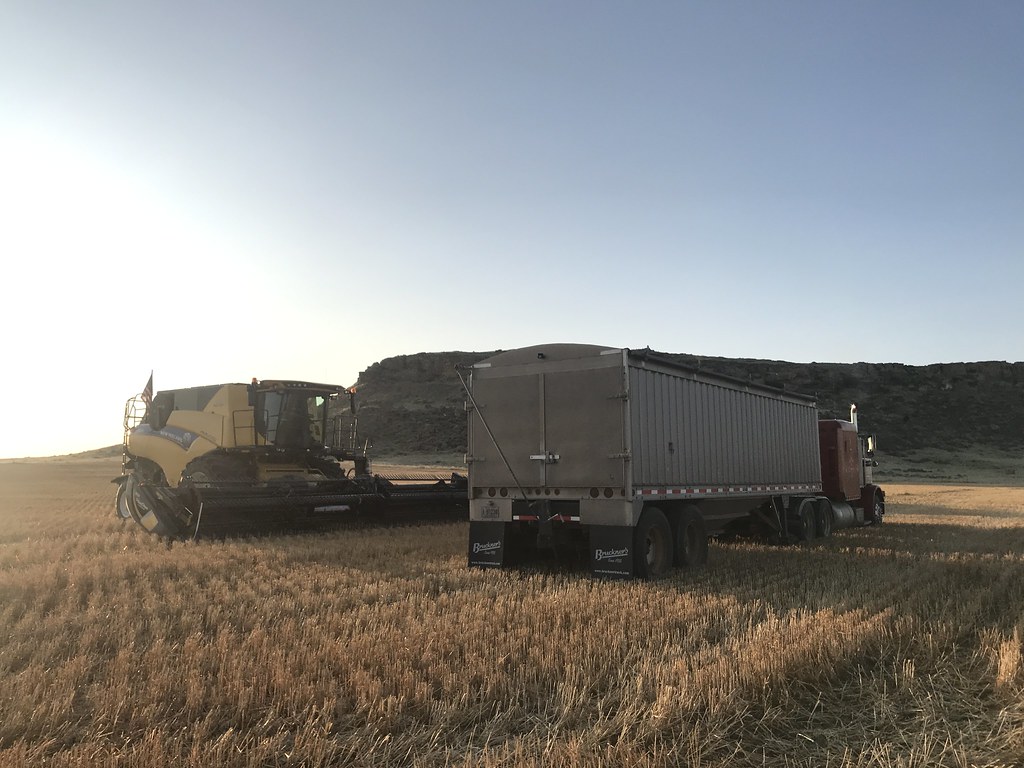 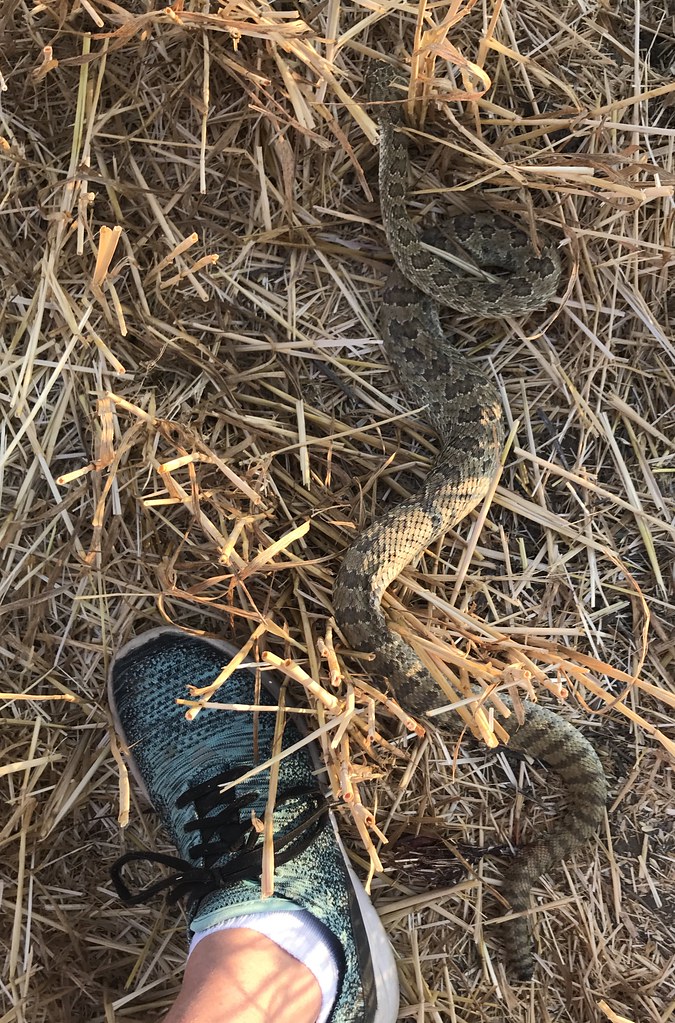 Apparently when Jim and I were in the field on Wednesday taking the sample cut, at some point we ran over this huge rattlesnake. Even though I knew it was deader than dead, it still gave me the creeps being this close to it. I wanted to have some sort of reference to see just how big it was. 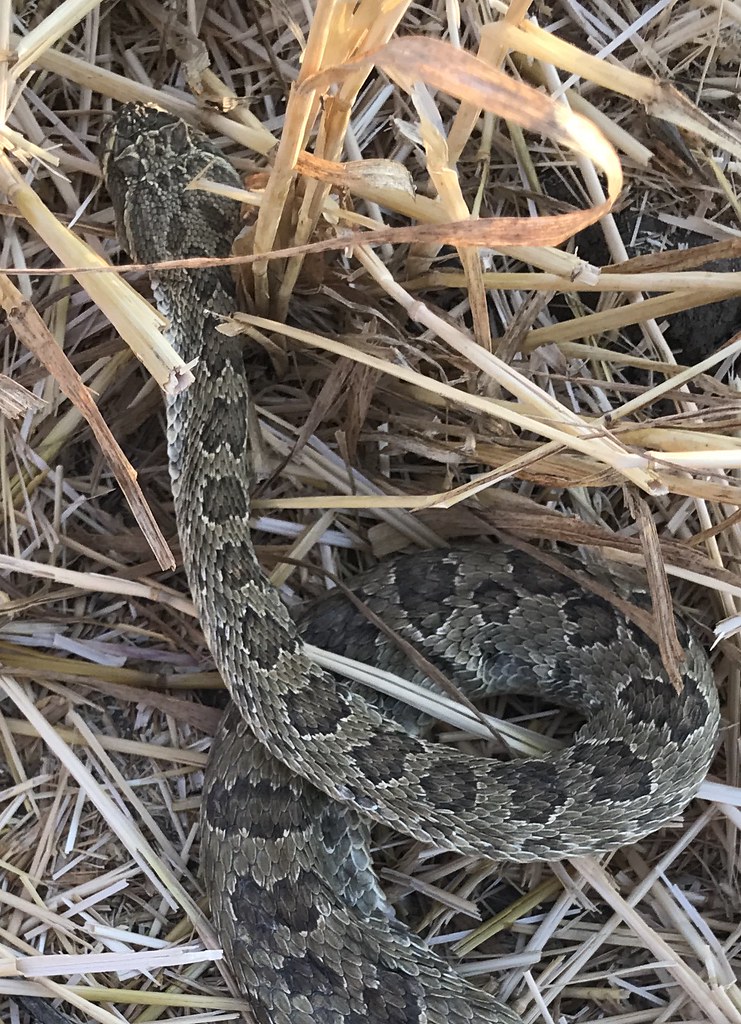 I’d just as soon not see one of these alive in the field! 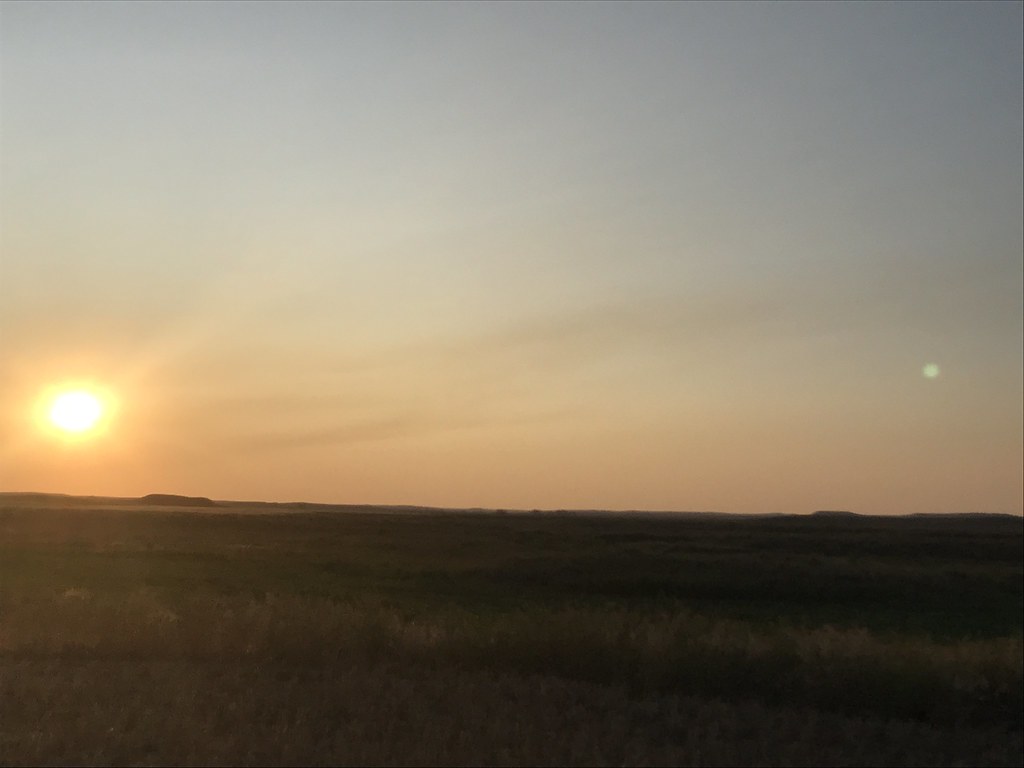 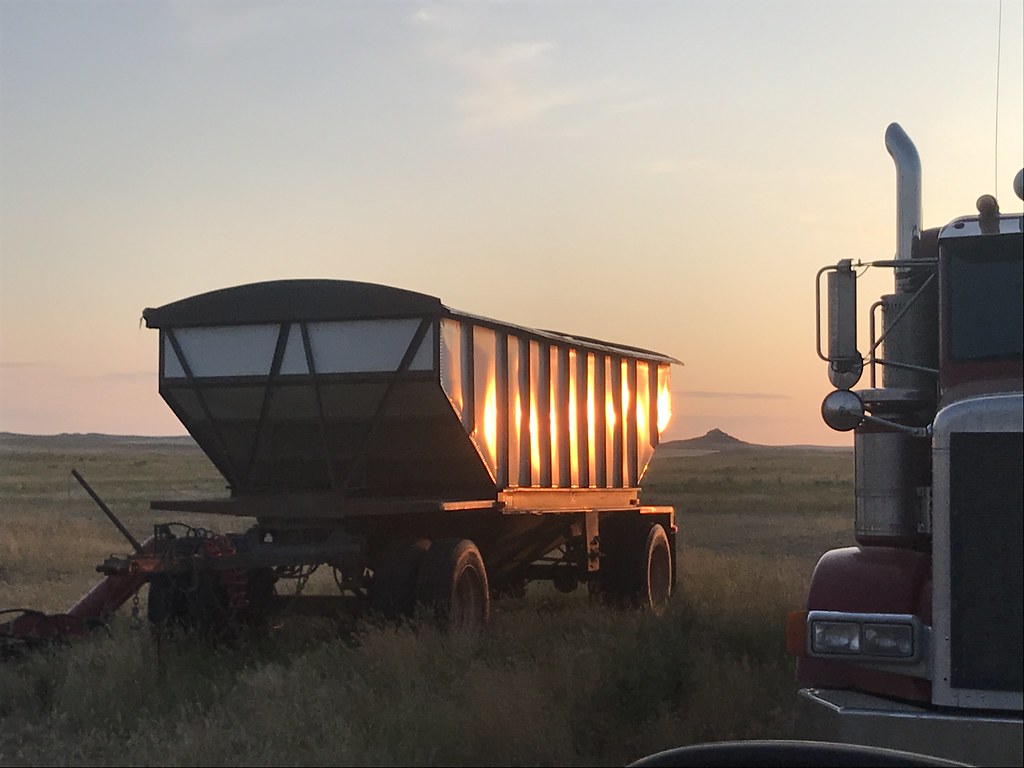 The same sort of scenario played out on Friday afternoon. We cut just enough bushels to make the bin with the air work. The moisture had dropped a point since the previous day but was still too high to put in the bin and not worry about it spoiling. Once we cut our 3,000 bushels, the combines were shut down. There was more rain in the forecast for the following day. As we were leaving the yard, raindrops were beginning to fall. 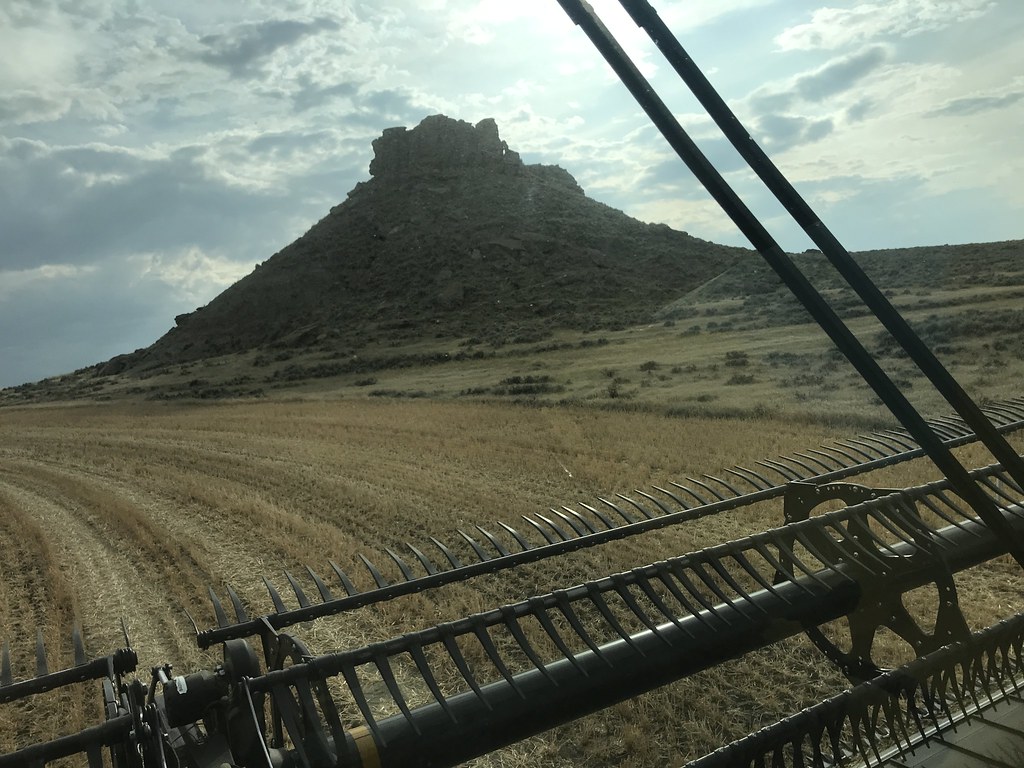 Cutting what we can before the rains move in again. 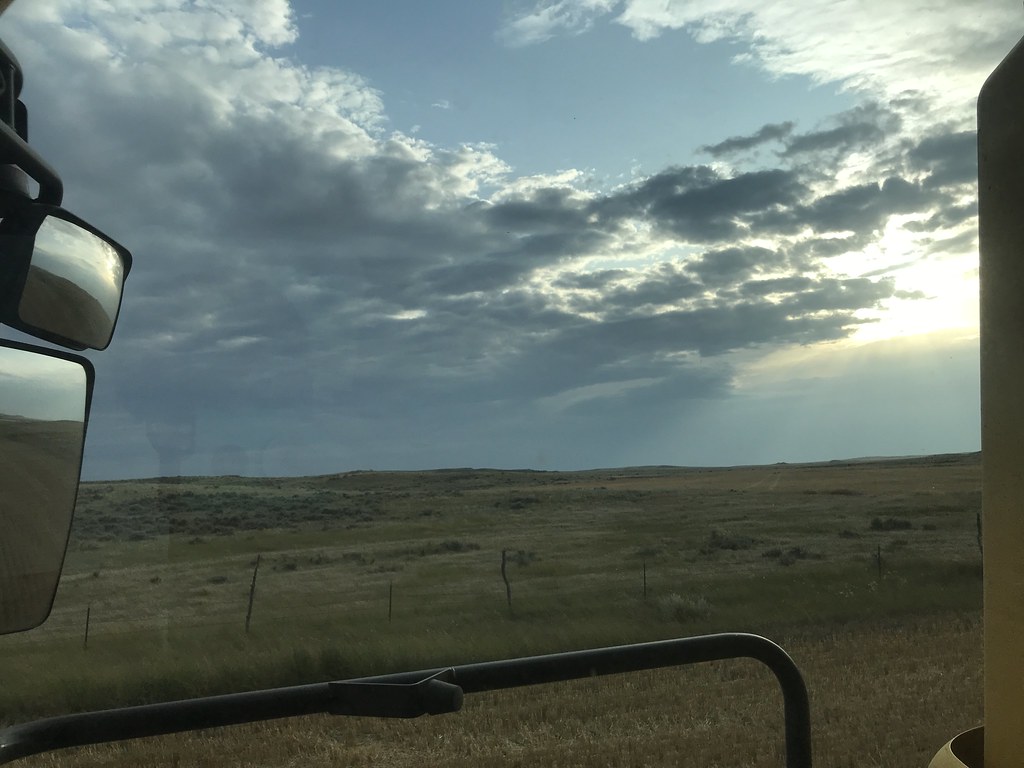 Nearing the end of the day and the clouds were getting thicker and darker on the horizon.

Yesterday—August 17—reminded me that winter is just around the corner. We had more rain and the high was only 60 degrees. The “fireplace” was on all day. Tom stopped by the trailer house for coffee and a visit. This eventually led to lunch (broasted chicken, of course) at the Hell Creek Bar. The rest of the day was spent watching old harvest DVD’s beginning with 1990. We didn’t get very far because I took a lot  of video! Thank goodness I did because there are a lot of memories we would have never remembered otherwise. I dragged that bulky, cumbersome camcorder along with us everywhere! Once in a while (not very often), Jim was the videographer and there’s even a little footage of me with the kids. 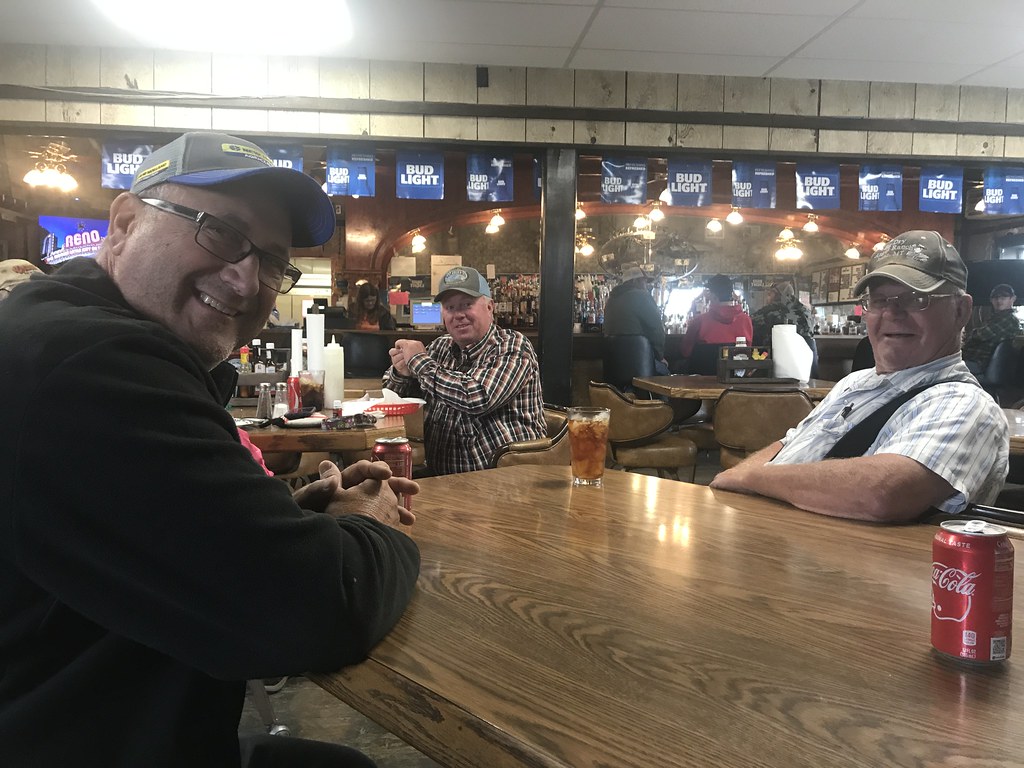 Lunch with Tom at the Hell Creek Bar. 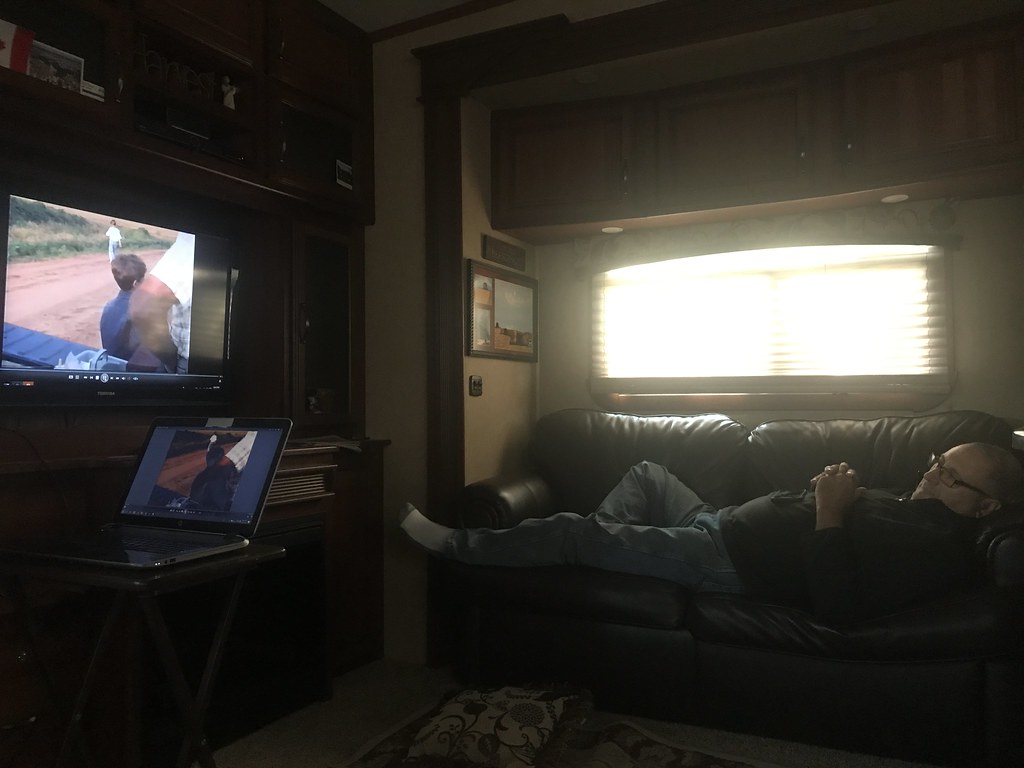 The sun is shining today. It’s the perfect temperature for humans but not nearly hot enough to feel like we should be attempting to cut wheat. I’m going to say another day of sun and wind and try it again on Tuesday afternoon. The forecast for the upcoming week is more like summer again in the mid to upper 90s.

I can’t believe we’re in the middle of August. School has started for the kids in Jordan and for Eli and Nora. The Facetime report from the two of them after their first day of school was priceless. Not as good as being there … but almost! 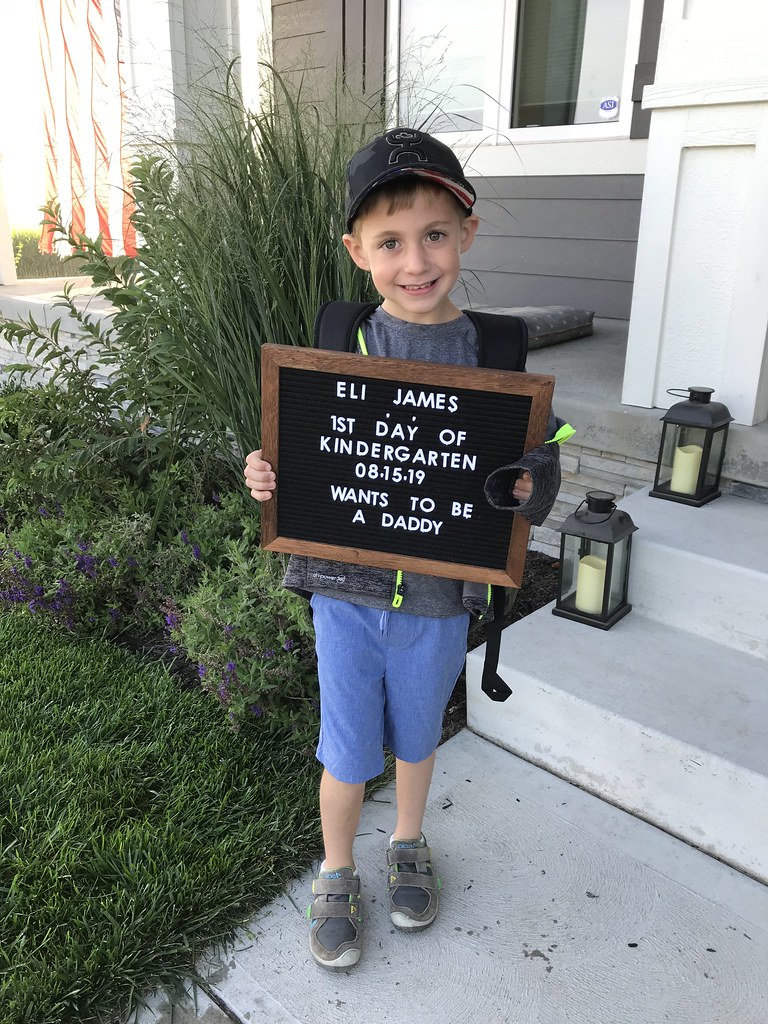 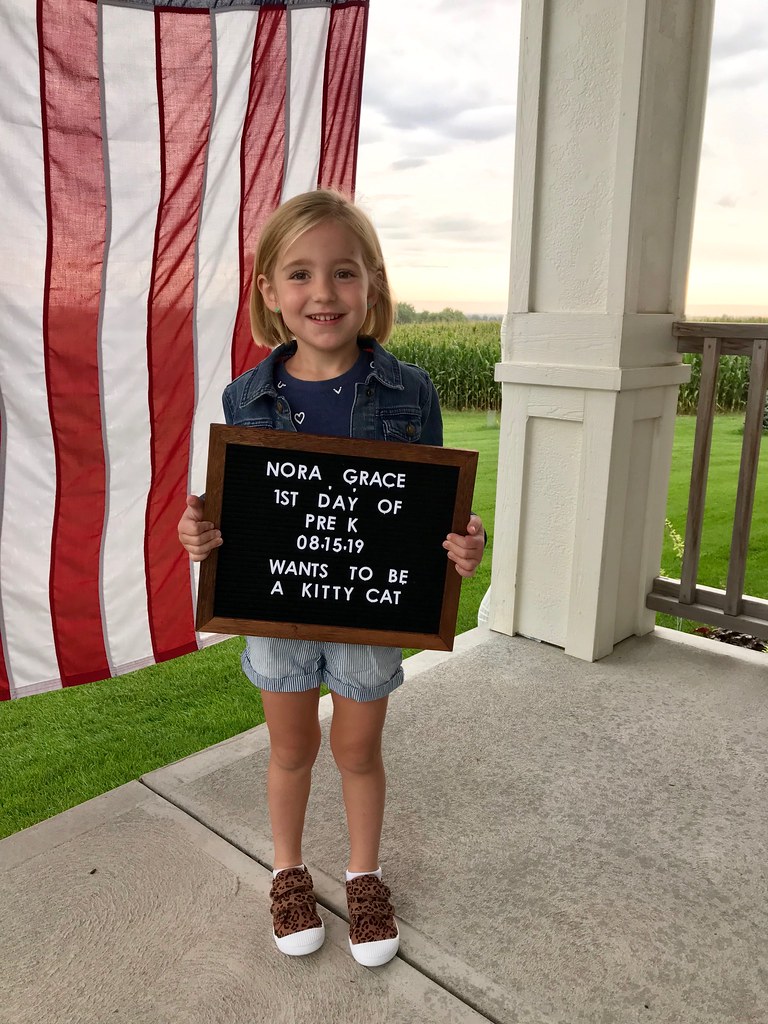 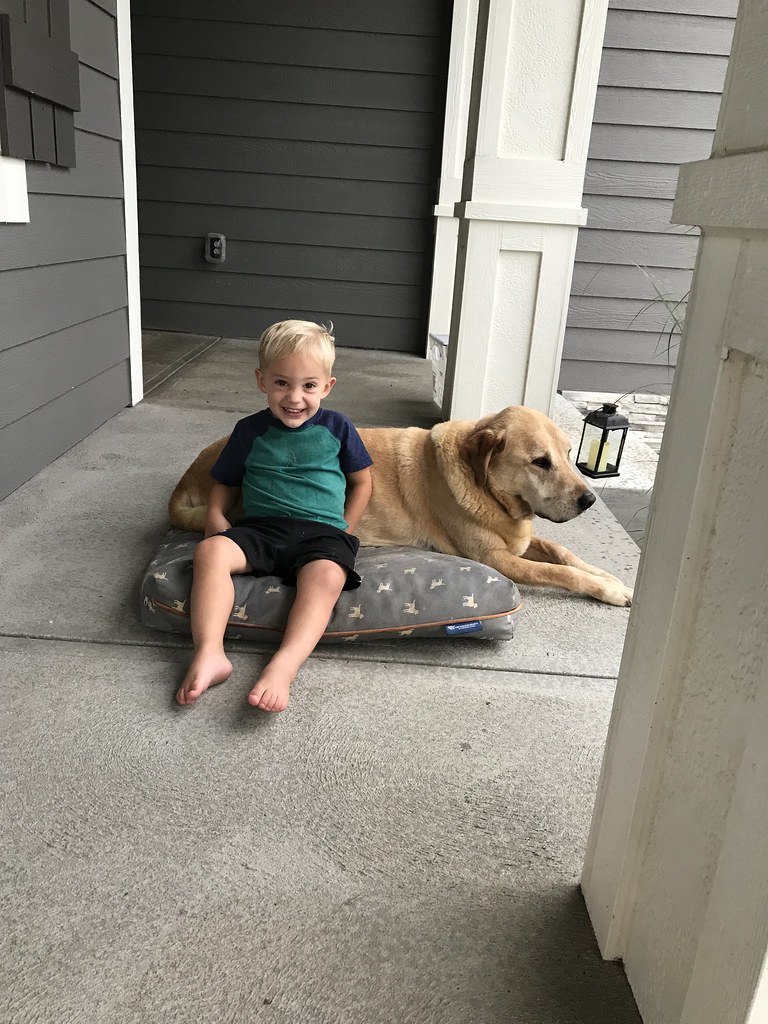 Some may say he’s too young to realize just how his days have been changed now that the two older siblings are away. I think his smile says differently.  (Photo by Jamie Hermesch.) 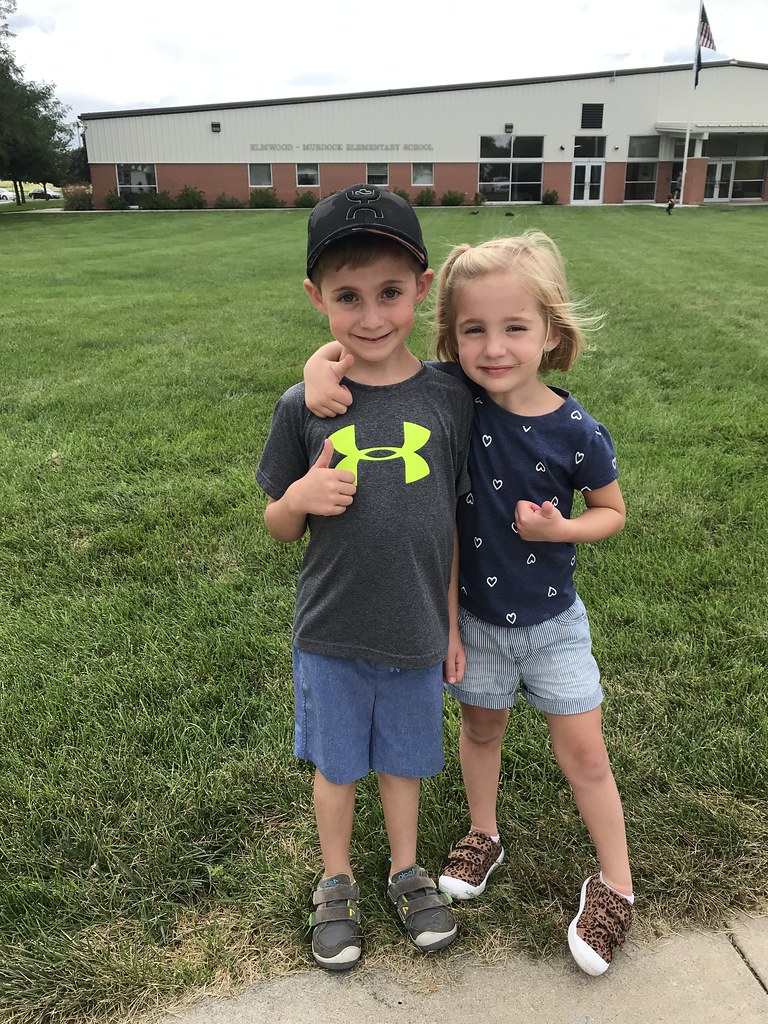 Two thumbs up explains how the first day of school went for the two of them!

Until next time …”Life is all memory, except for the one present moment that goes by you so quickly you hardly catch it going.”–Tennessee Williams