Onida, South Dakota—Rain. Wind. Hail. I probably shouldn’t be using four-letter words, but it’s just unavoidable at this point. The last time we got together I brought you video live from the field as a significant storm was approaching. How did it all play out? Not very good, I’m afraid. 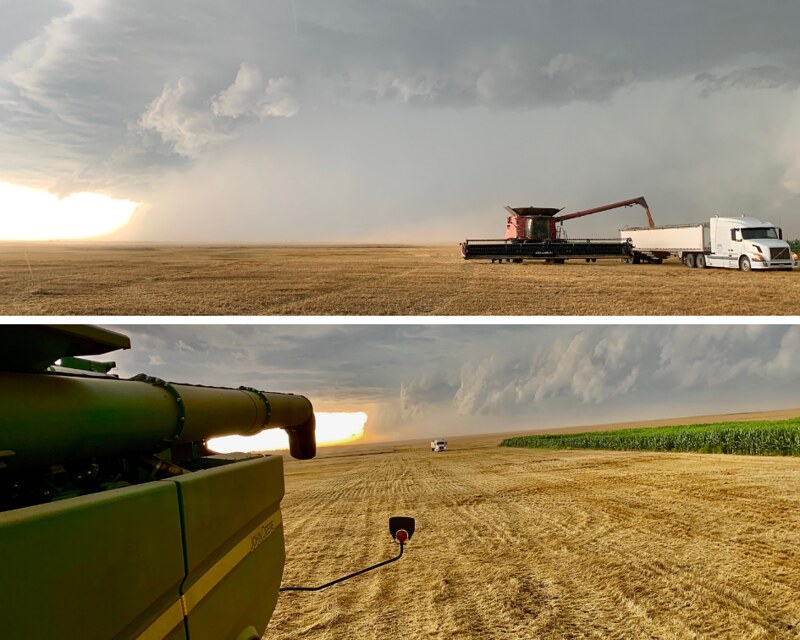 Angry skies made it clear we were not going to dodge this storm.  Little did we know just how severe this one would become, packing hail and high winds. Rain drops started to fall just as we brought in the machines.

We expected to have some rain, but forecast models showed the bulk of the system slipping just past us.  The ability to stream live radar and projected storm paths on our phones while in the field is really helpful as we try to manage the logistics of crew members in lots of different places. We thought we were in pretty good shape … until the system took an unexpected turn towards the south. We took a direct hit from the storm.  Dented pickup trucks, house trailers and the damaged crops tell the rest of the story. 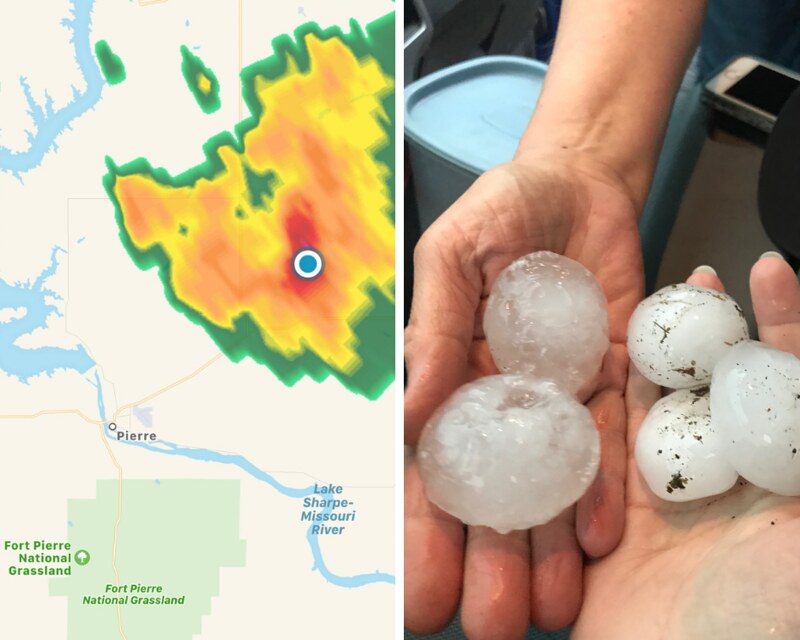 A direct hit from the most severe part of the storm caused plenty of damage in the area. Above are pictured some of the hails stones Vernelle and Brenda picked up off the ground at the trailer park. Even larger hail was reported in the area.  Dents on the pickups and trailer house siding will have to be evaluated and addressed once we return home.

If you recall one of the most catastrophic hail storms ever on record in South Dakota took aim at this area last year, causing wide-spread devastation. While the storm damage didn’t compare to last year’s event, a notable swath cut across the state again. Some fields have now been hailed out two years in a row, and that’s a tough pill for farmers to swallow. It’s hard to say how many acres here were damaged or destroyed, but driving around the area showed square mile after square mile of destruction that stretched over 50 miles.  That included a significant number of acres belonging to our farmer, acres we had been scheduled to harvest.  Crop insurance helps some farmers offset part of their losses, but no such insurance exists for custom harvesters … it’s just forfeited income for the crews. Simply put, everyone loses in this situation. 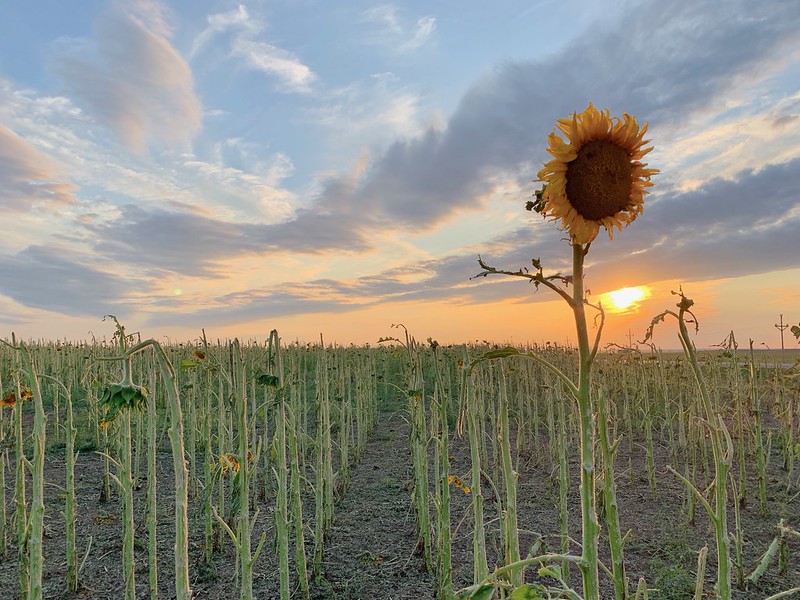 Sunflower fields were stripped of their leaves, the brown soil turned green from tattered leaves stripped by the hail. Other fields were blown flat by high winds. Thousands of acres were a total loss. 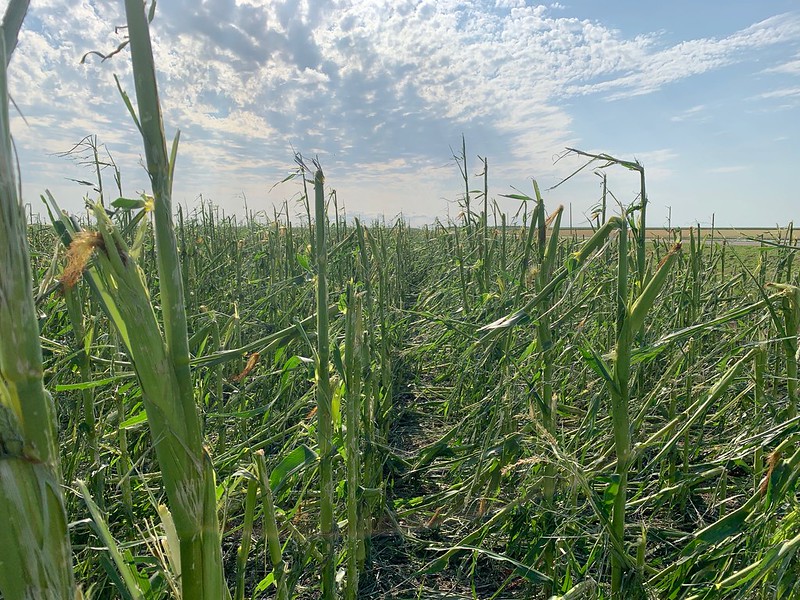 A cool, wet summer had allowed an impressive corn crop to grow in this area. Many farmers will never know just how good it was, as the hail destroyed a significant number of corn acres. 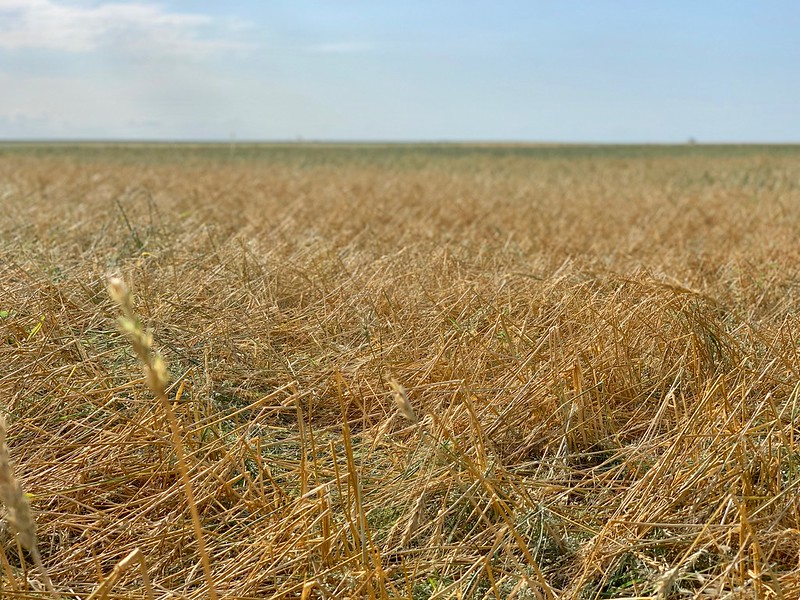 The unusually slow harvest progress has exposed the wheat to potential hail storms for a longer period of time this year than normal. Sadly, many acres were “harvested by hail” this week. It highlights why farmers hire crews to quickly harvest ripe fields before catastrophic weather events like this occur.

It seems when we get to South Dakota the crew starts to grow weary of our cramped housing accommodations. So we have been out and about enjoying some local scenery and activities. A special dinner at Bob’s Steak House, west of Gettysburg, provided some fantastic views overlooking the Missouri River.  The local pool and park here in Onida offers a great place to waste some time by taking a dip, utilizing the playground equipment and shooting a few hoops. The highlight of our down time had to be the three-day Sully County Fair, entertaining us with exhibits, tractor pulls and a pretty outstanding rodeo. 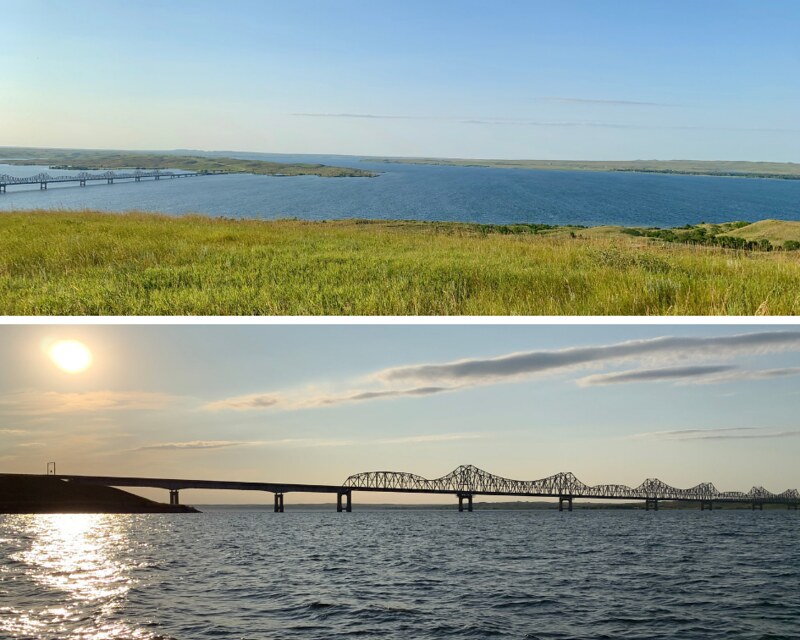 The Missouri River winds through the grasslands of South Dakota, creating some outstanding views. Last year we harvested along the river, but those fields were destroyed by the hail this week. 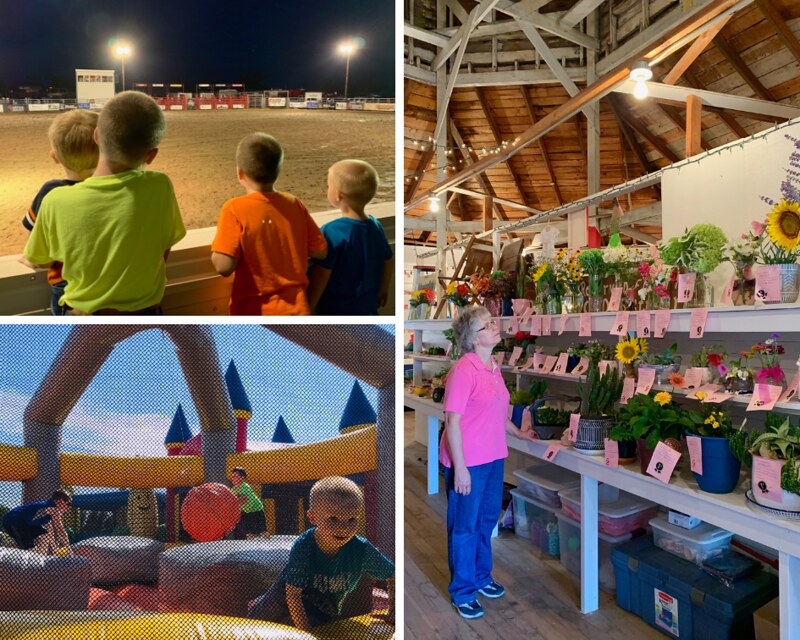 The Sully County Fair was a crew favorite this year, helping us pass the time during our rain delay. Activities included fun in the bounce house, two nights of rodeo and lots of exhibits to explore. 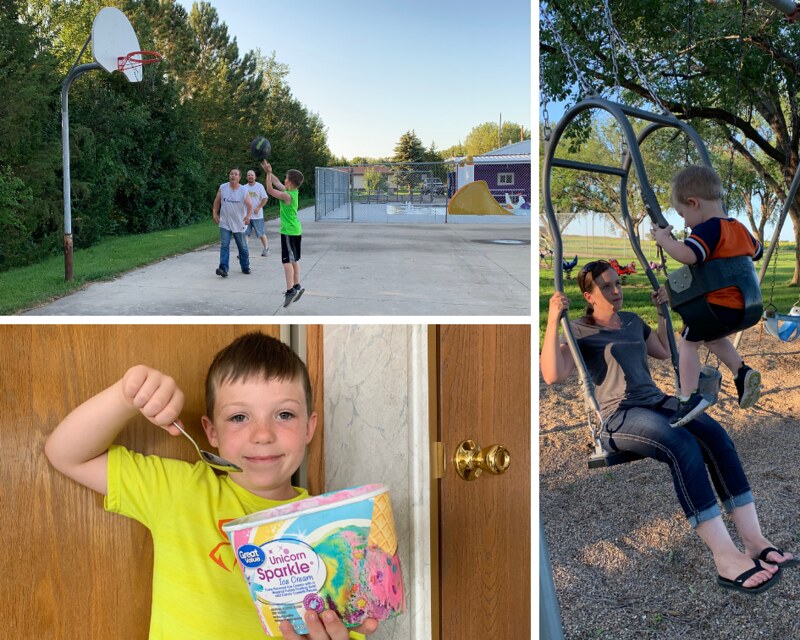 Titus shoots some hoops with Glen and Cameron at the park, while Brenda tries out the swing set with Canaan. Ezra demonstrated the proper way to eat unicorn sparkle ice cream with magical purple frosting swirl.  It has proven to help lift the crew’s spirit during our rain delays. Whatever it takes, right?

Eventually things started to dry up after the hail storm, and the machines were able to get one one good day of harvesting in. The next morning, however, a quick check of the radar showed a 100% chance of rain. Desperate to get something done, the crew worked for about two hours in unfavorable conditions before the rain drops started to fall again. Sometimes it seems like we have our own rodeo in the field before a storm, getting the machines shut down, the trucks parked on solid footing and everyone loaded up to head home without looking like drowned rats.  Let me show you a little of what it’s like,  just watch the video below.

Apparently two storms this week were not sufficient.  The day before we thought we could perhaps harvest again another storm brought heavy rain. For those of you counting at home, that’s three storms in one week, with much of the area receiving around 5 to 6 inches of rain.  It’s mid-afternoon right now, and the temperature is 65 degrees under cloudy skies … not exactly drying weather. The next four days are supposed to stay in the 70’s. Crews are facing hard choices once again. North Dakota has begun harvesting and crews need to be in two places at once. There is a lot of wheat left to go here in this area, so no one really knows how this is going to play out. Sound familiar?  So we patiently wait, but it’s beginning to wear on the morale of farmers and harvesters alike. Be sure to check back soon, and I’ll fill you in on what becomes of this slow, soggy South Dakota harvest. Until then I’ll try and refrain from using those four-letter words.

All Aboard Wheat Harvest is sponsored by High Plains Journal and John Deere. Be sure to join the conversation by leaving a question or comment. Brian can be reached at Brian@allaboardharvest.com.