Jordan, Montana–I’m certain you’ve had days like this … you try and try to make some sort of headway and, instead, it feels like you get nowhere.

That’s what this past week has been for us.

We didn’t get back in the field until later in the day on Tuesday, Aug. 20. Our intentions were good–we wanted to start around 10 a.m., but the moisture just wouldn’t dry down to the magic number until early afternoon. We finished the winter wheat and moved immediately to the spring wheat. 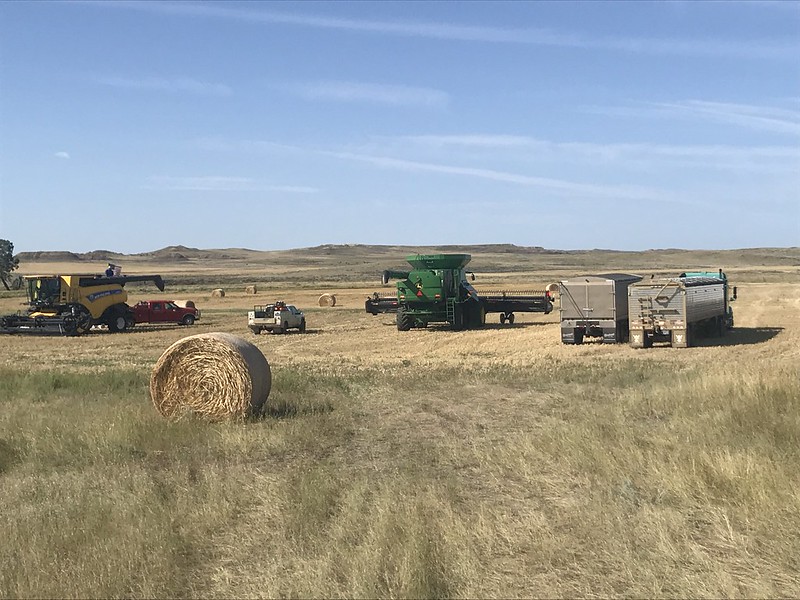 The beginning of another day! 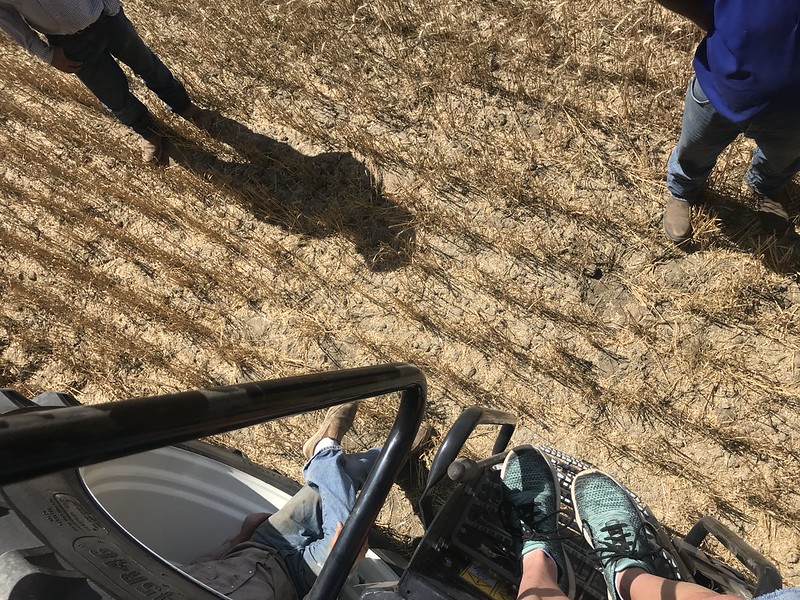 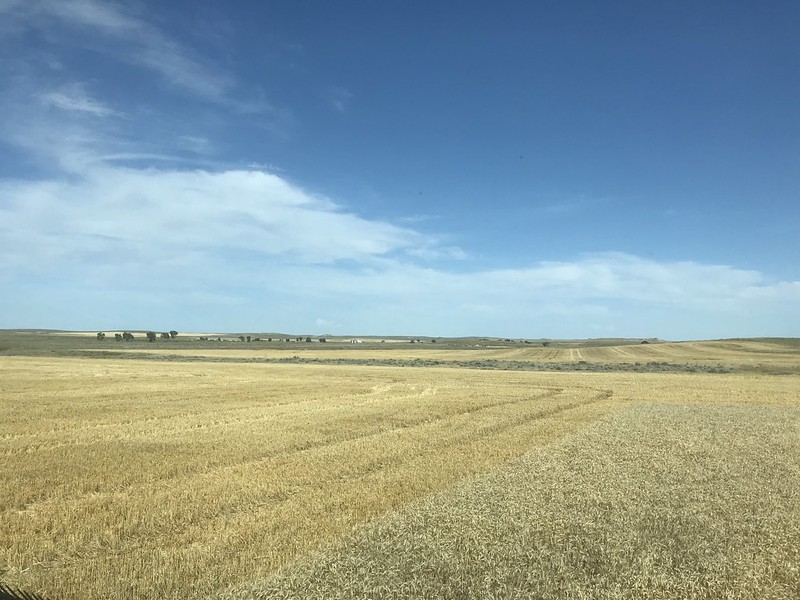 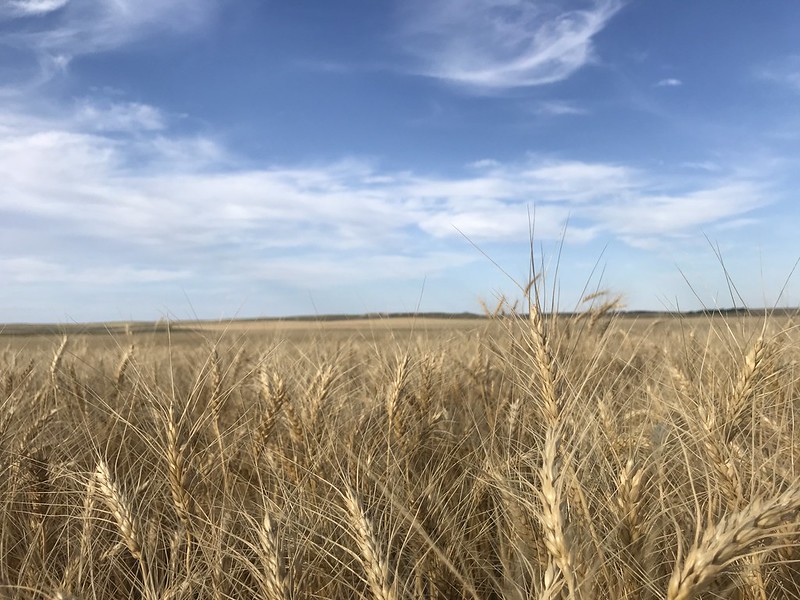 The spring wheat appears to be yielding 50 to 60 bushels per acre. Most of this is also going into the grain bin so the specifics,  like weight and protein, are limited to none. Right now, it’s none. But it looks like a very nice crop!

We put in a full day on Wednesday. It was one of our bigger days and we cut quite a few bushels. It felt good to be at a constant move and not worrying about whether or not it was dry enough to keep rolling. However, we knew when the day ended there was a 40 percent chance of rain for the next day. 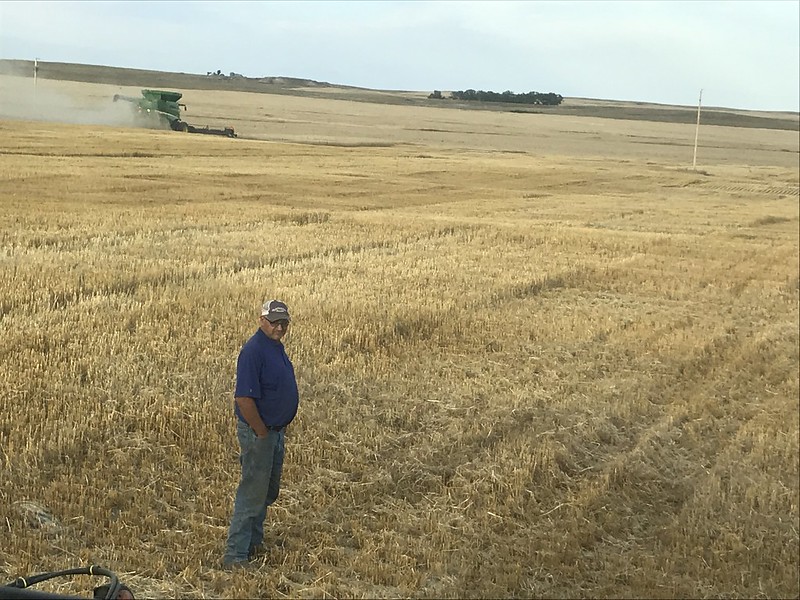 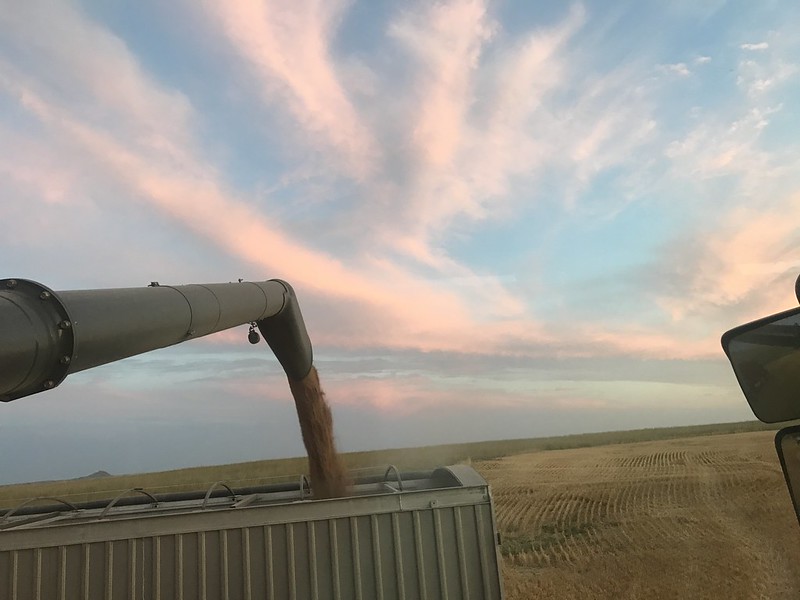 Thursday began just like any other morning. I was dumping my second load into the truck when Jim began making the hand signals meaning shut down the machine. I know I probably gave him a look of confusion before I shut everything off and idled the machine down. For the life of me, I couldn’t figure out why he wanted me to stop. 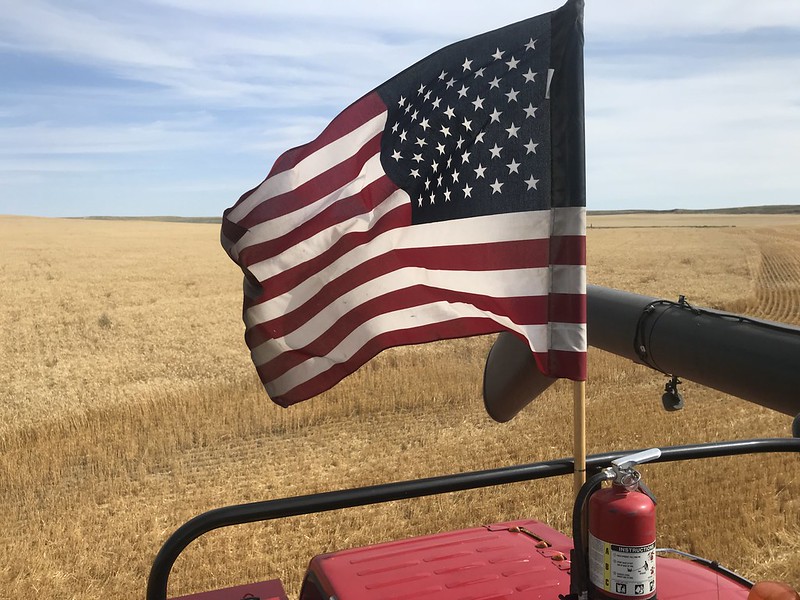 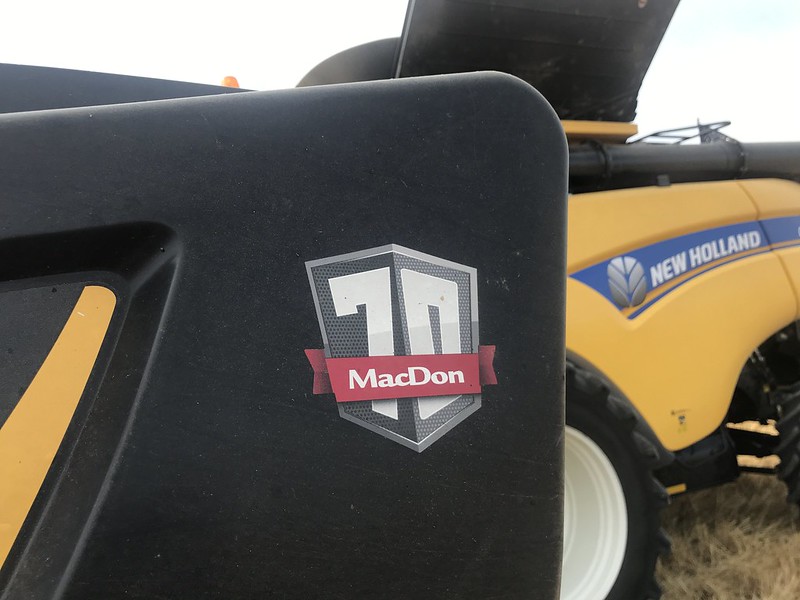 After several circles around the combine, while it was running at full throttle, belts were removed and other means of narrowing down what could be causing the noise, he figured it out. It was coming from under the combine. After removing a shield, he realized we had a broken clean grain auger. 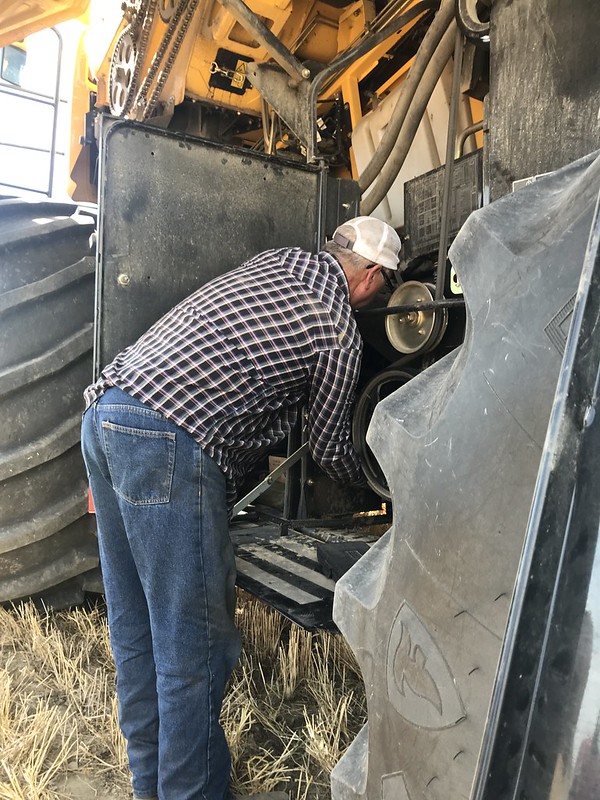 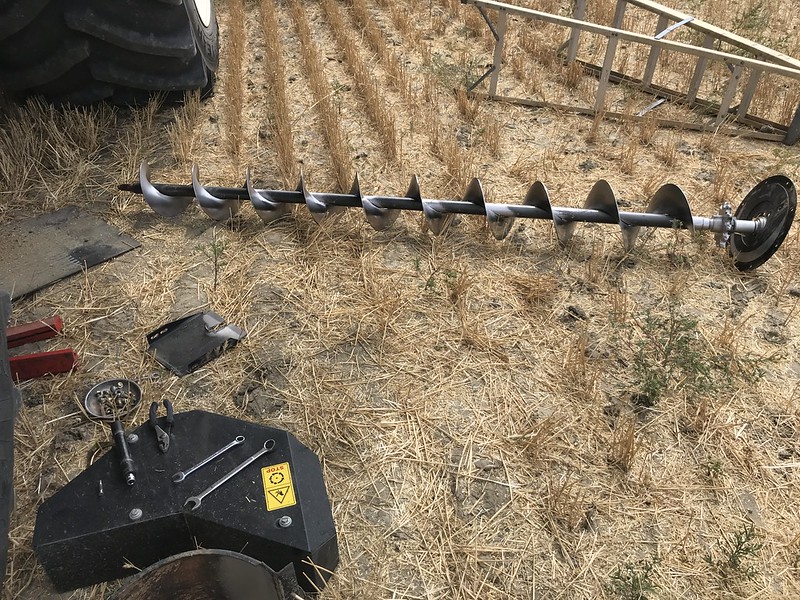 A call was made to our local dealership at home and then another one to the New Holland Harvest Support truck. It was decided a road trip to Regina, Saskatchewan, was the thing to do. There wasn’t a new auger to be found anywhere in the United States. We were just lucky to have found one within driving distance—though it was a 600 mile round trip. I never would have dreamed we would be making a trip to Canada after a part. It was a good thing I thought to pack our passports! 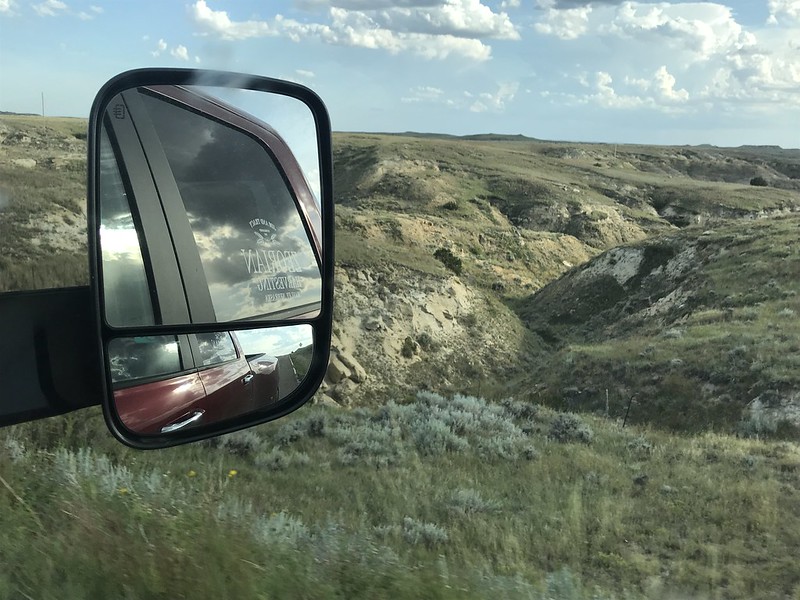 The Montana scenery between Jordan and Circle, Montana. 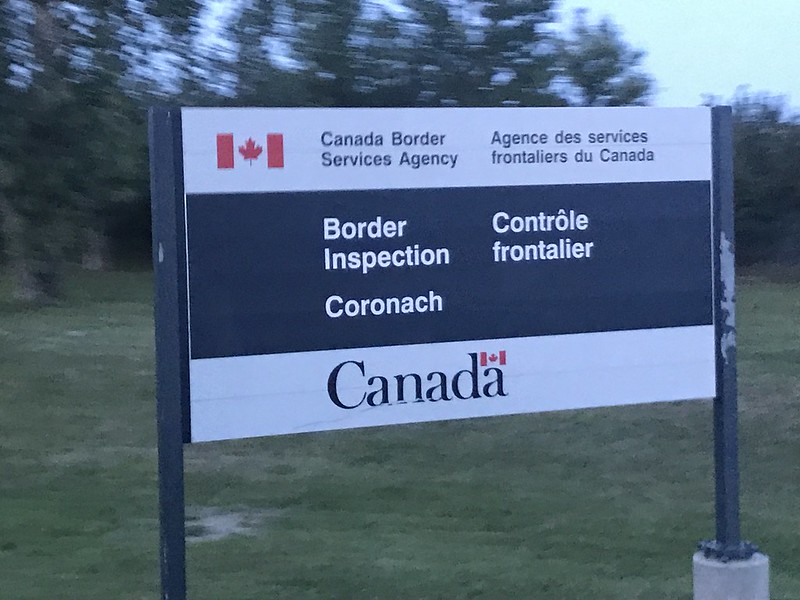 Thursday night was spent in Regina.

The next morning, we made our way to the CNH parts warehouse, picked up the new auger and were on our way again. Before we were out of the city limits, though, we had to make a quick stop at the New Holland dealership for new bearings. Then we were headed south once again. 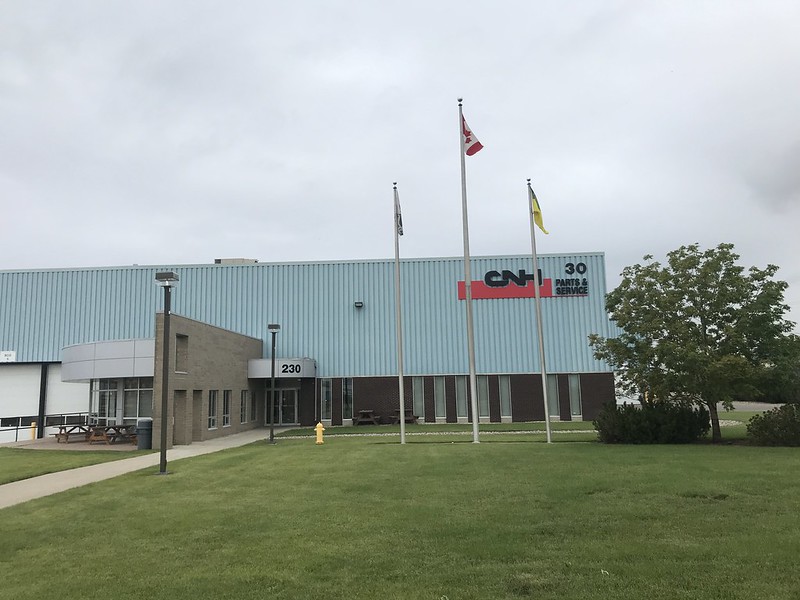 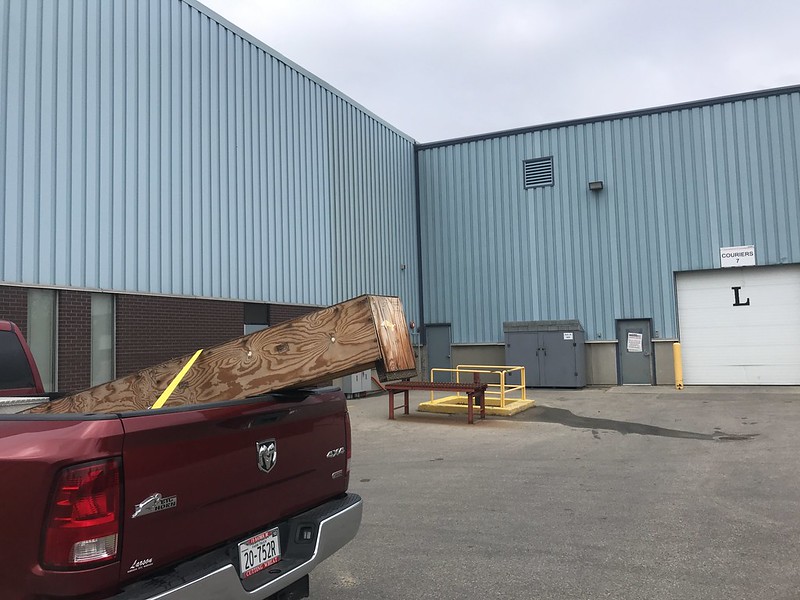 Heading home with our new auger in the back. 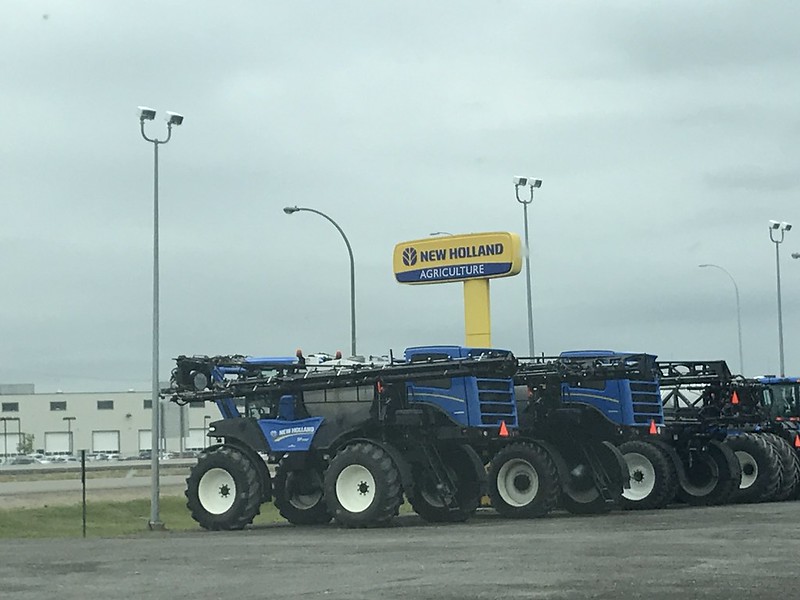 Stopped at the Regina New Holland dealership for replacement bearings. 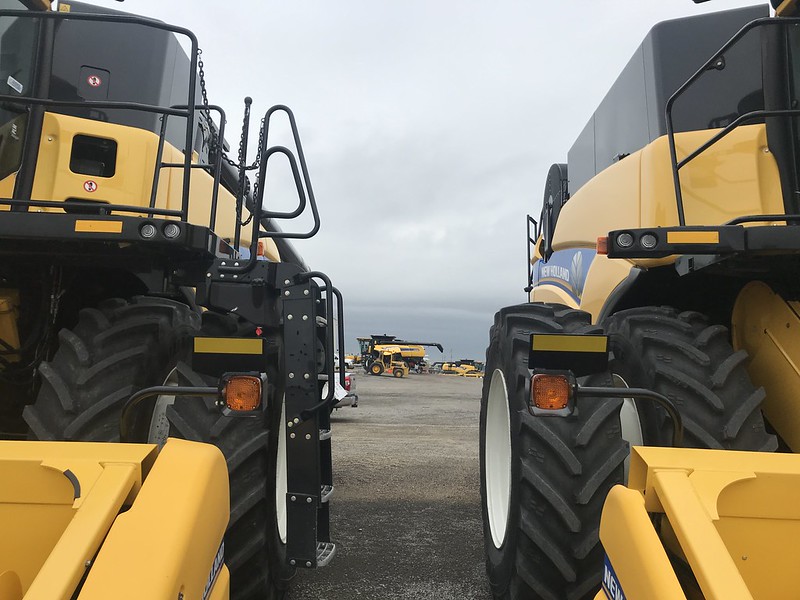 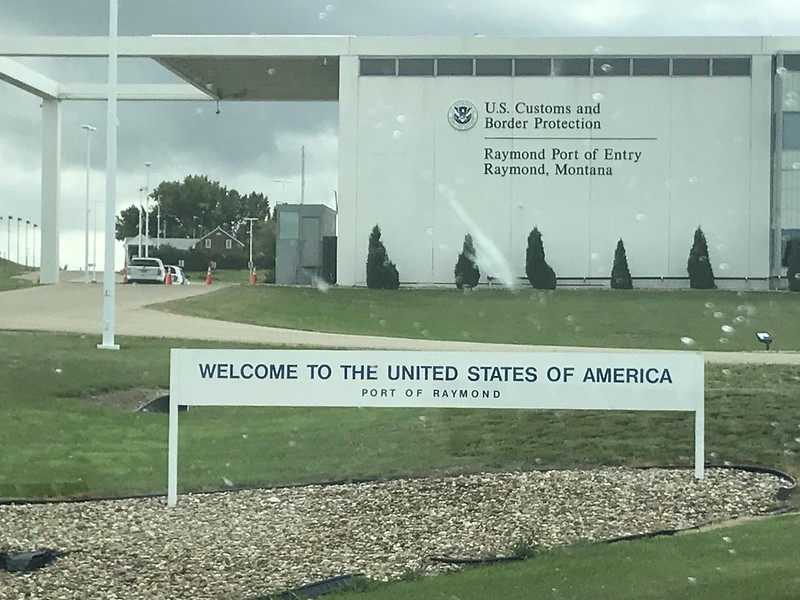 “Welcome home,” said the friendly border agent as we were rolling past the checkpoint.

As soon as we got up on Saturday, we had a quick cup of coffee and we were out the door to get the replacement auger where it needed to go. We were finished with that project at 10:15 a.m. 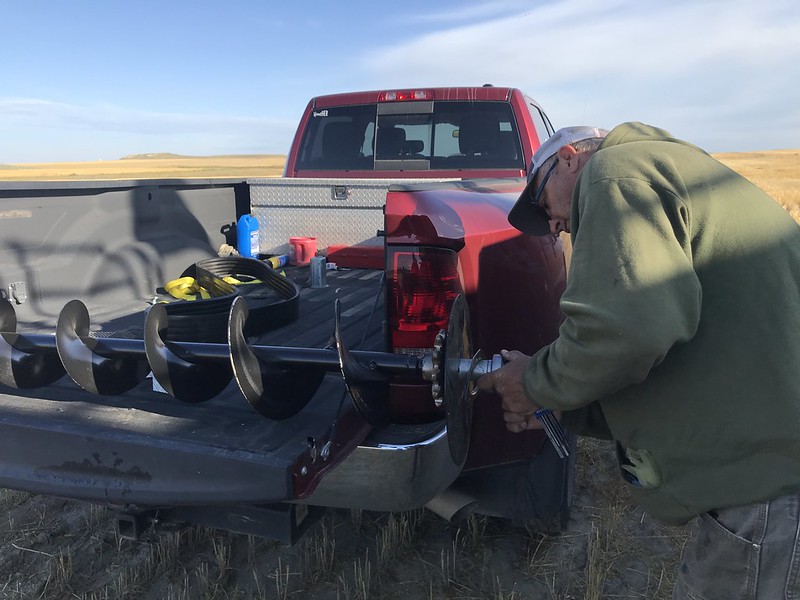 Prior to putting the new auger in the machine, Jim had to put new bearings on. 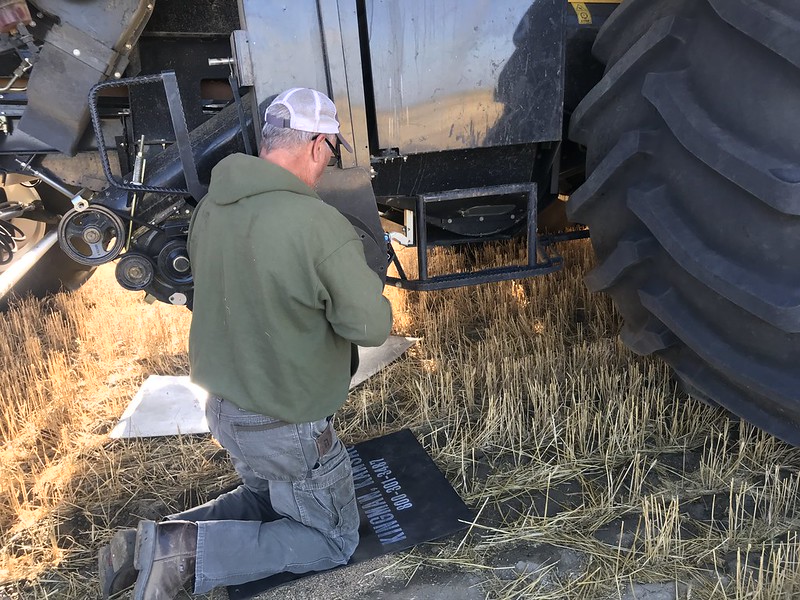 Auger in place and now just working on getting everything back together again.

It did rain Thursday night at the field, so we didn’t miss out on much cutting. We had plenty of time to make the repair and then I headed back to the trailer house to make lunches. When I returned about 12:30 p.m., both combines were cutting. What a glorious sight to see! 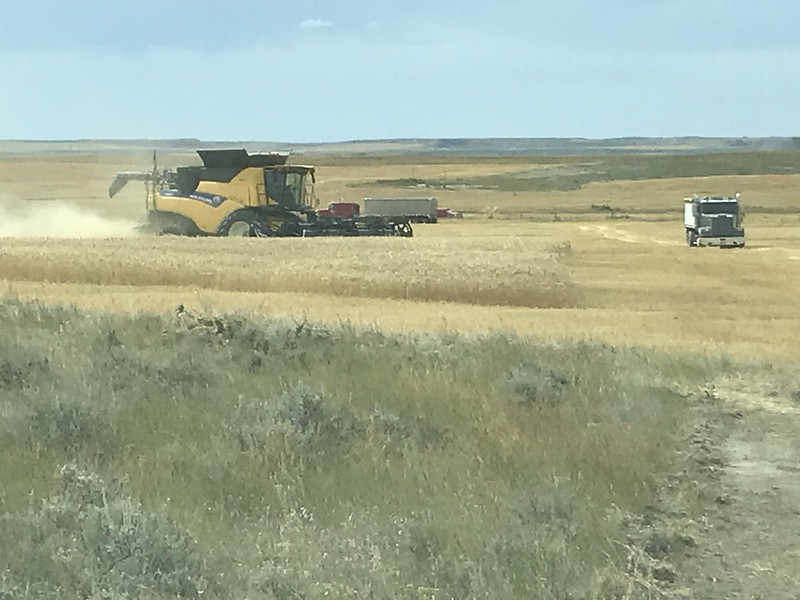 However, because the moisture just wouldn’t dry down, we were only able to cut 4,000 bushels of wet grain and put it in a bin with air. Once the bin was full, the combines were shut off for the night. 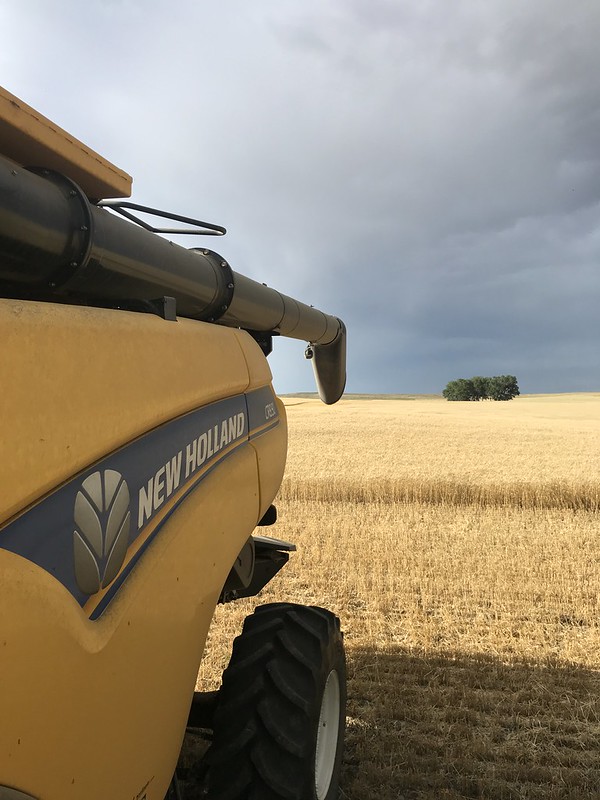 Ending the day early with storm clouds brewing to the north. 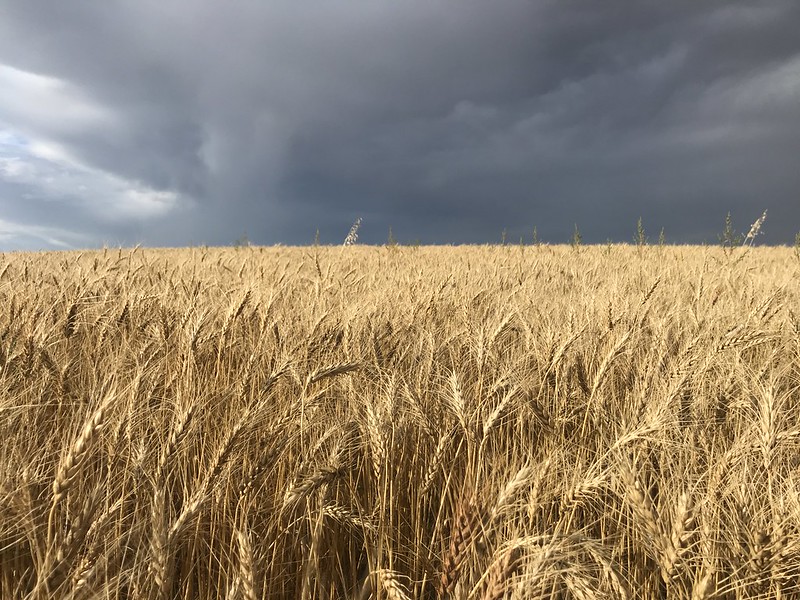 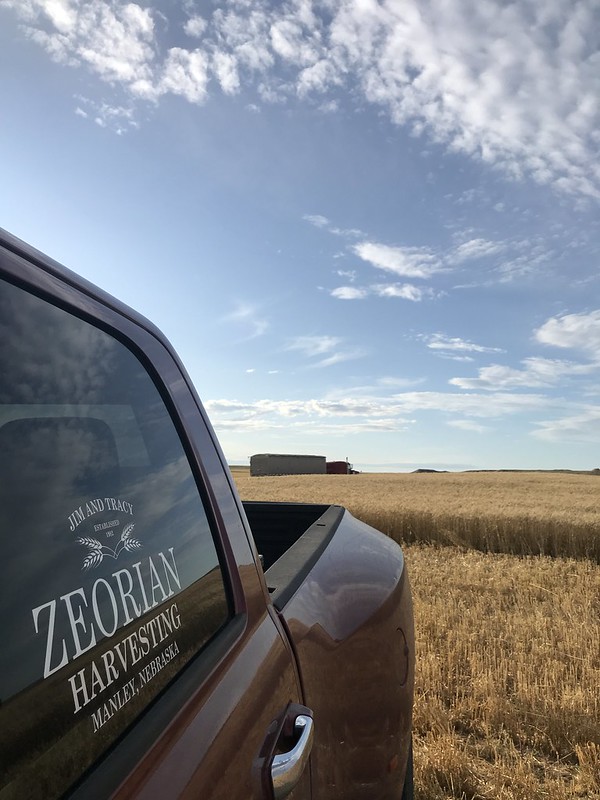 Today, Aug. 25, began with the intention of getting started about 1 p.m. We did … but the moisture was just too high, once again. So we waited. And waited. And waited some more. Finally about 3:30 p.m., we decided it was good enough to keep rolling. It was partly cloudy and the sun was plenty warm when it could shine through the clouds. The wheat just wasn’t getting enough of that non-filtered heat long enough to do any good—very fast. The days are shorter and the temperatures haven’t felt much like wheat cutting weather. 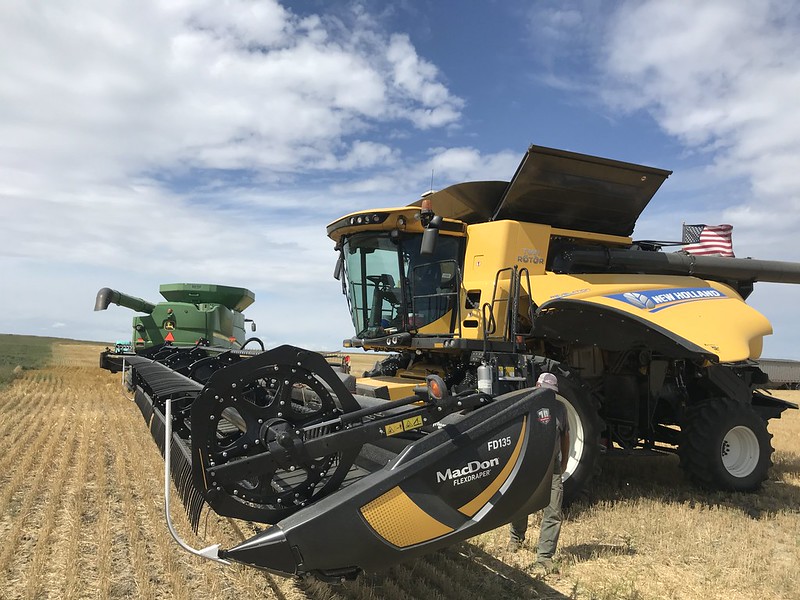 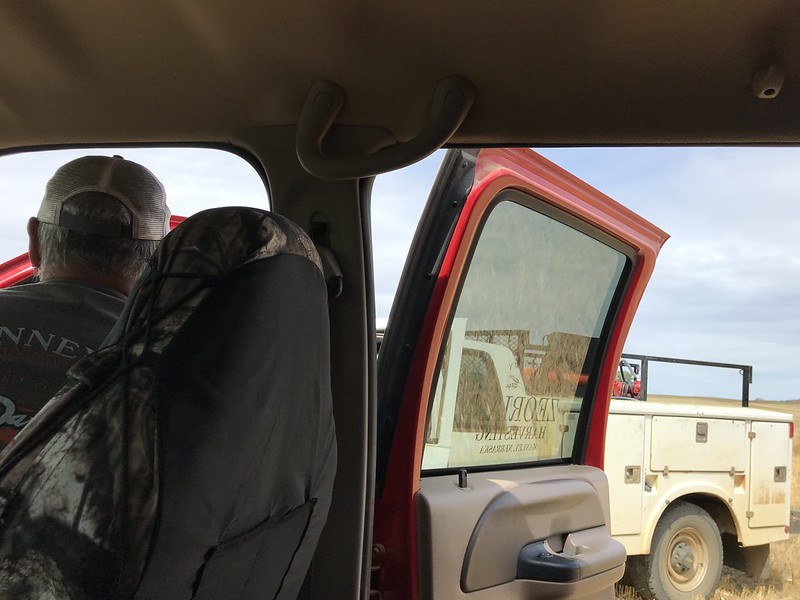 Telling more stories and killing more time while waiting for the wheat to dry—this kills me.

About an hour after we got started, the dark storm clouds were rolling in from the west. The weather app said we could have rain at 7 p.m. It didn’t wait that long. By 6:30, it was raining and the wind was blowing something fierce. 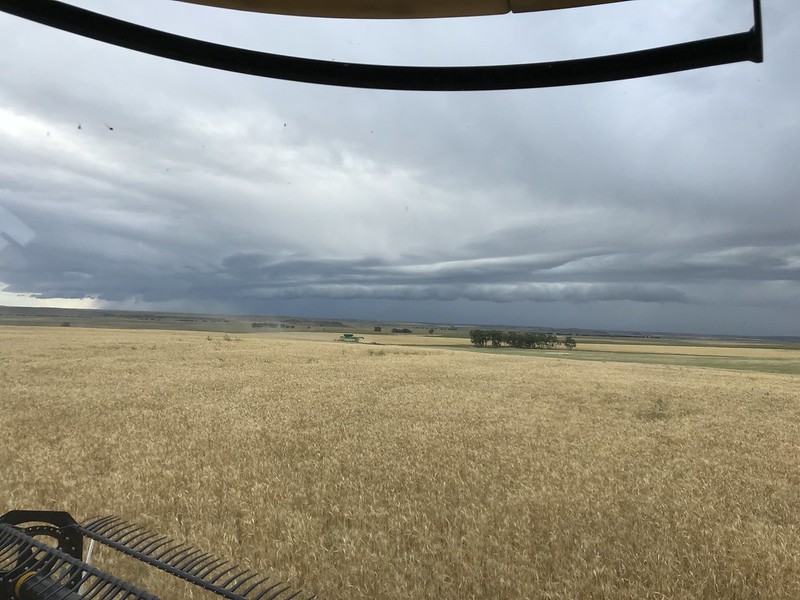 Watching the storm clouds roll in and wishing we could have just 30 more minutes to finish loading the semi before it started to rain. That didn’t happen. It was pouring while we were trying to get the truck loaded. 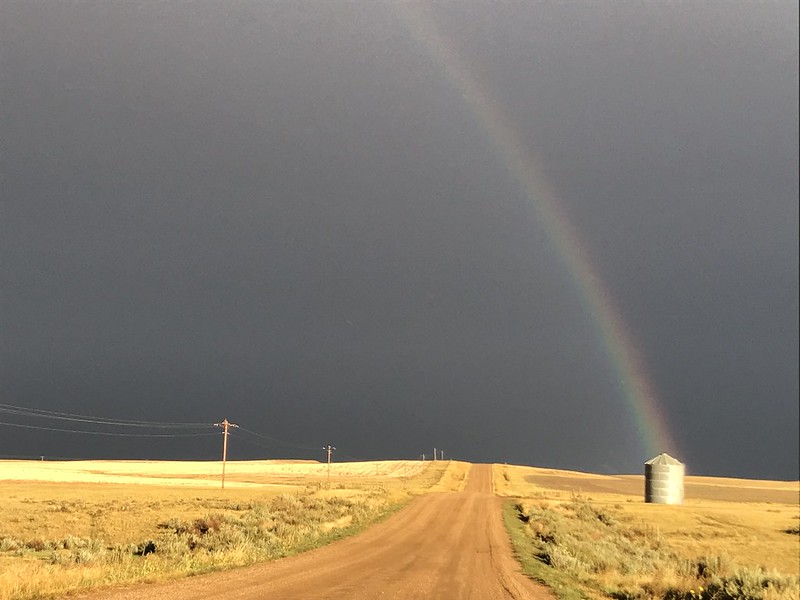 Look! I found the pot of gold!

This has definitely been another summer for the books! Typically, you can come here and cut every day until you’re done. Not so much this year. #thestruggleisreal

This will be my final All Aboard Wheat Harvest update. However, we’re a long ways from being finished with the 2019 wheat harvest. I will continue telling our story on my personal blog – Nebraska Wheatie. If you feel like you need a bit of a harvest fix,  jump on over and see what the heck is going on with the Z Crew!

I hope you have enjoyed being a part of our journey this year. It has been an interesting one, for sure!

Until next time … “Be true to yourself, help others, make each day your masterpiece, make friendship a fine art, drink deeply from good books–especially the Bible, build a shelter against a rainy day, give thanks for your blessings and pray for guidance every day.”–John Wooden