Shattuck, Oklahoma—It has been a slow start but we’re in the field! The weather’s dried up and we’ve been in full-blown harvest mode, and it’s crazy how time can get away from you. Over the week Mom and Dad have been able to get roughly 600 acres cut with the help of Adams Harvesting crew stepping in with a second machine and truck. Wheat’s being cut and other than that there’s not a whole lot to report on. The wheat is very short, a result of the drought. Test weight is 50 at best and it’s yielding just terrible.

I took supper out to the field a couple nights ago because they were cutting fairly close to town. I made “Hungry Jack Casserole.” It was a hit! Even for the “picky” eaters. It’s an old recipe and very simple. I’ll include it at the end of the post!

Callie and I did take time out last night to see a movie at the drive-in theater here in Shattuck. I wish we had one around home! It was such a treat to sit under the stars on the tailgate of a pickup and watch a movie on the big screen.

I pray we can continue to stay in the field. Thankfully the weather looks like it’s going to cooperate. 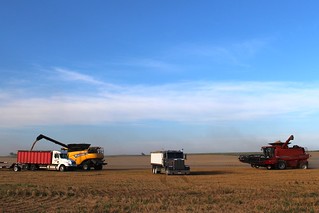 That’s the sight I’ve been waiting to see for about 11 months! Anthony Adams of Adams Harvesting has stepped in to help us get this wheat out so we can get up north as soon as possible. His truck is on the far left and that’s his red combine. 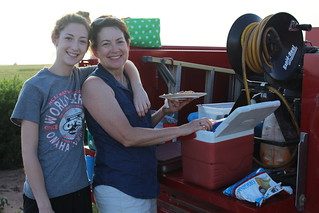 Callie and Mama—They’re the cutest. 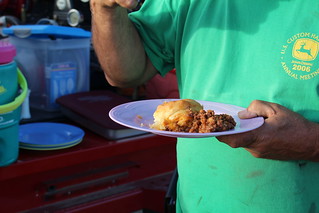 Jimbo liked the casserole. He’d never come right out and say it but I think it’s one of his favorites. 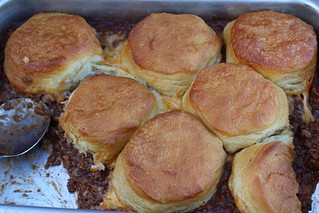 Preheat oven to 350 degrees F. Brown hamburger. Add onions, pork and beans, BBQ sauce, brown sugar and cheddar cheese to the hamburger. Mix on low heat until the mixture begins to bubble and simmer. Poor mixture into greased 9 x 13. Separate can of biscuits and put ’em right on top of the hamburger mixture. Bake at 350 until biscuits are done! 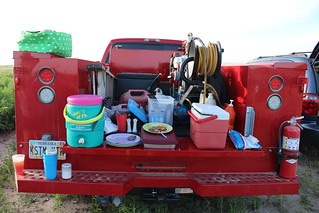 My favorite way to enjoy a home-cooked meal is off the tailgate of a pickup. 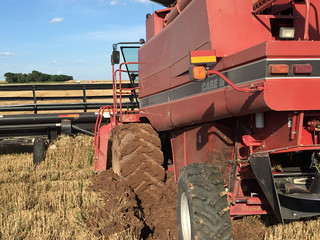 Anthony got himself into a bit of a pickle but was easily pulled out. 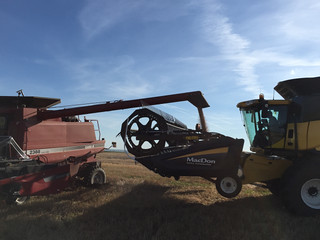 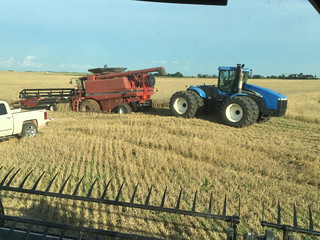 Farmer helped us out and brought over the “Big Blue Tractor.” Pulling out that combine was no problem for it. The tractor now serves as a visual landmark so we can find where Mom and Dad are cutting. Ha!