All Aboard Harvest | A trucker’s tale
9553
post-template-default,single,single-post,postid-9553,single-format-standard,qode-quick-links-1.0,ajax_fade,page_not_loaded,,qode-title-hidden,qode-theme-ver-11.2,qode-theme-bridge,wpb-js-composer js-comp-ver-5.4.7,vc_responsive

Big Springs, Nebraska—As a truck driver, you need to know your cardinal directions. You also need to know how to decipher directions from many different types of people because you never know where your guidance will be coming from. Please read on to learn about my most recent “trucker tale.”

The bin sites we have been hauling to that the elevator set up have been filled, so they sent me to another site just “up the road,” no road numbers or amount of miles given. The guy in the scale house told me there would be a Quonset with a tractor and an auger set up next to some bins alongside the road on the east side. Here’s the thing: this is western Nebraska. Do you know how many of those there are around here? They are a dime a dozen! I ended up driving right past where I was supposed to go (the building on said site was not a Quonset, it was a cement shack) and had to whip around in an already-cut wheat field to get back. Added plot twist—I got told by scale house guy that this bin site was on the east side of the road and on my way out, I ran into our Farmer Clint and he told me it was on the west side of the road.

Once I drove into where I was supposed to be, another trucker who had had the same struggle greeted me. Never met this guy in my life, but we high-fived over the fact that we had found the right place after the strife we went through to do so. I then took my place in line and waited my turn to unload. While the trucker who greeted me was unloading right ahead of me, he looked over at me and we simultaneously shook our heads at each other. Not long after, the auger had the misfortune of busting a chain, which caused another bottleneck in the process. A couple hours and a new chain later, things were back up and running. Dad was the next truck in line so he stepped in to help out with the fix. What a guy, huh? The bin workers brought ice cream treats for all the truckers that were in line in the heat of the day which, as you know, is when things break down. I don’t know about you, but I never say no to ice cream.

Quote of the Day—“Handier than a front shirt pocket on a plaid shirt!”

Stuff Harvesters Like—Directions that include road numbers, landmarks and distance in miles. 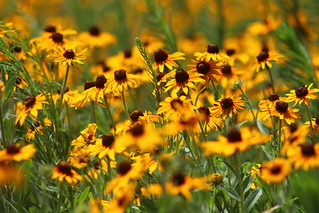 Pretty wildflowers right across the road from our field. 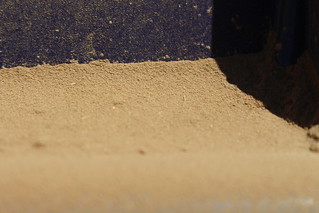 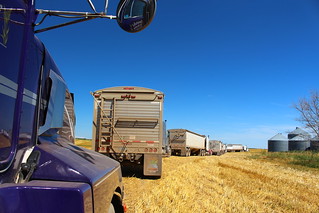 The line at the makeshift elevator. 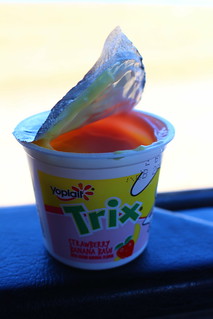 Never too old for Trix yogurt. 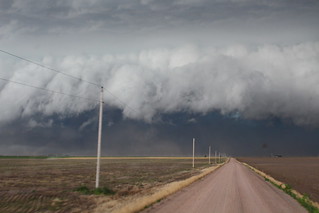 These storm clouds came rolling in and chased out of the field in a hurry! It didn’t rain much so it shouldn’t slow progress too much. 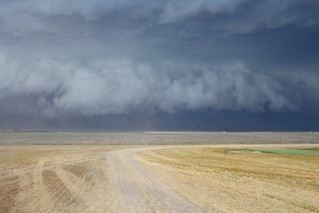 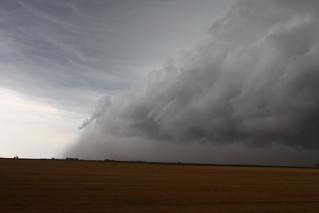 That was is headed straight for our field! I was on my way there from the elevator at the time and had to stop and snap this shot.