Jordan, Montana – Ugh!!!! That’s what I get! I was trying to hurry and get this done so I could take a shower and go to bed. I deleted pictures and I can’t retrieve them.  I had some really good ones that I was so excited to share.

So…here’s what you get. You’ll just have to believe me when I say the ones I “threw away” were darn good. Dang it! 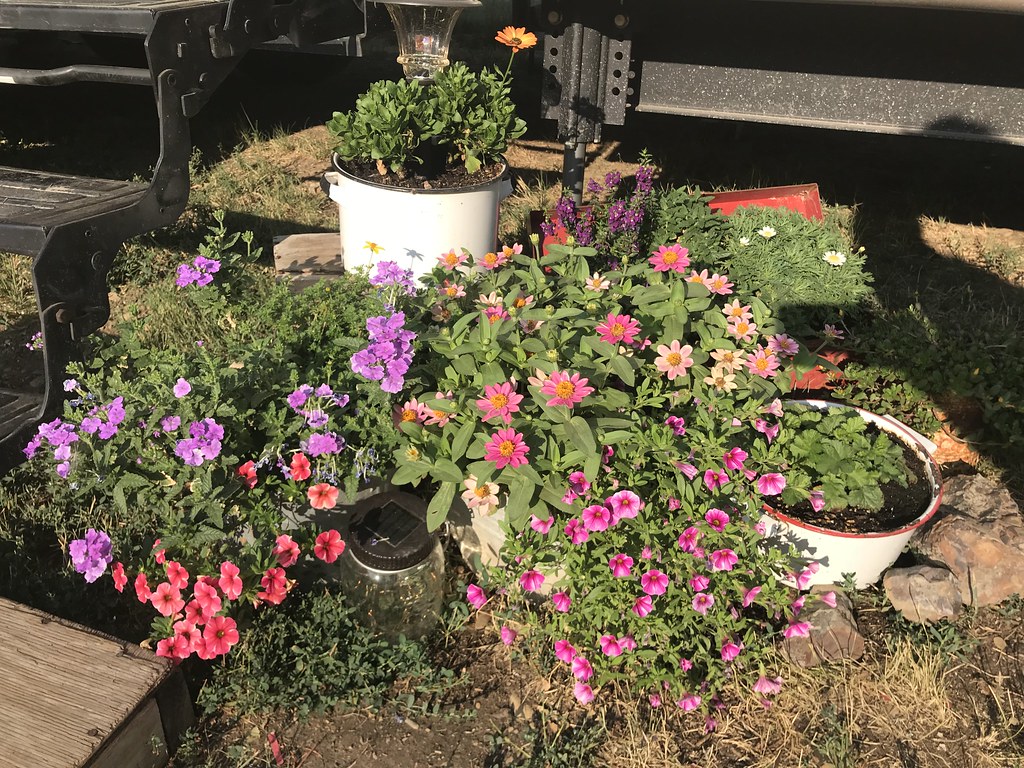 Just look how beautiful my mobile garden is right now! The water in Jordan isn’t good for humans…or flowers. I have a couple of people who have graciously provided me with rain water to keep them alive. Most people here have large tubs or barrels to collect rain water for reasons like this.

We finished with our third customer this afternoon (8/14) and moved to #4. Before we made the move, though, we had to finish filling the grain bin. Jim was on top watching it fill and I was standing at the back of Frank waiting for the hand signals telling me when to close the “gate”. And then I crawled up on top of the bin to shut the lid while Jim was tying up loose ends on the ground. That’s where the really cool pictures come into play. The ones that I no longer have.

We were fortunate to have the bin directly across the road from the field we were cutting. There were way more bushels hauled than just to the bin across the road. But filling it was awfully nice for the truck driver (aka Jim). When he ran out of room, he either hauled to another bin several miles down the road OR a semi would show up. There are local semi trucks for hire that come to the field, get filled and then take the grain to an elevator in Billings or Moccasin. A trip to the elevator from Jordan, Montana means a lot of miles! It’s not like it is in the southern states. There aren’t elevators scattered all over the countryside here. 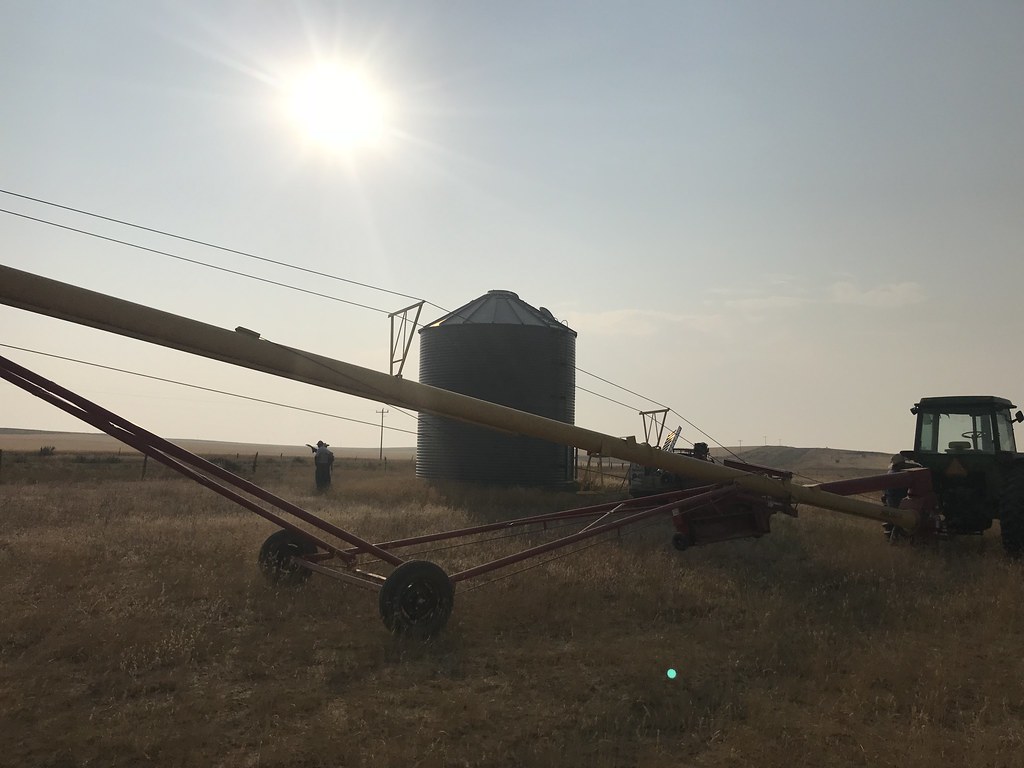 Setting up the auger for customer #3 on Sunday morning. 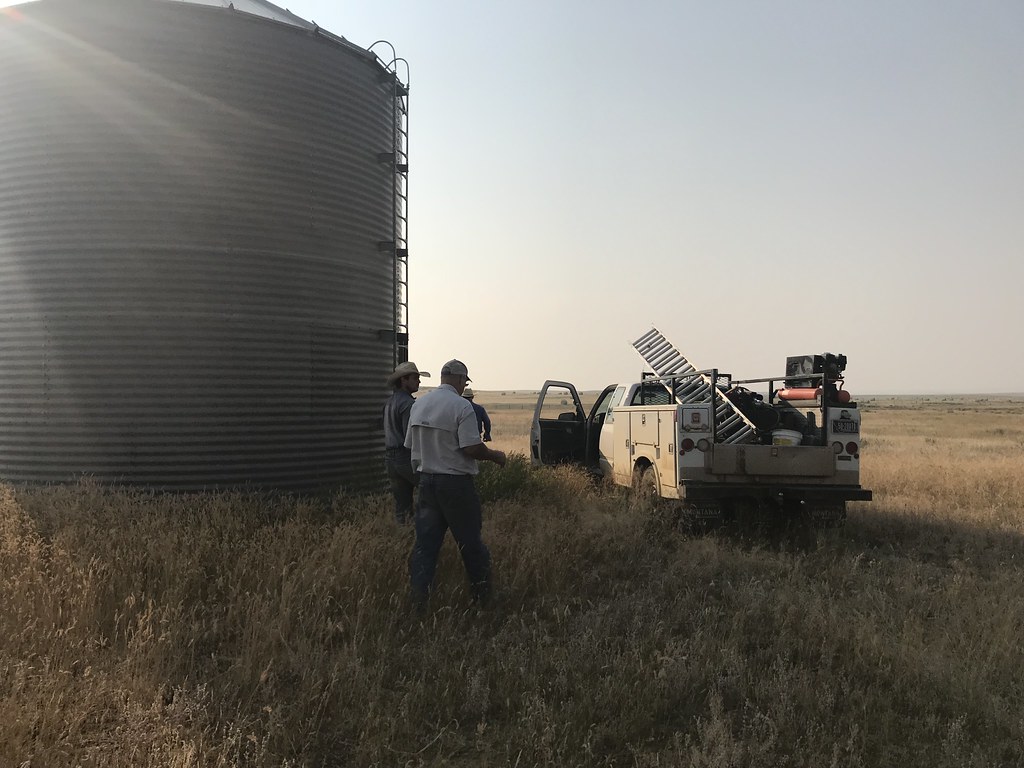 I think they were trying to figure out what would work best for the auger and trucks. 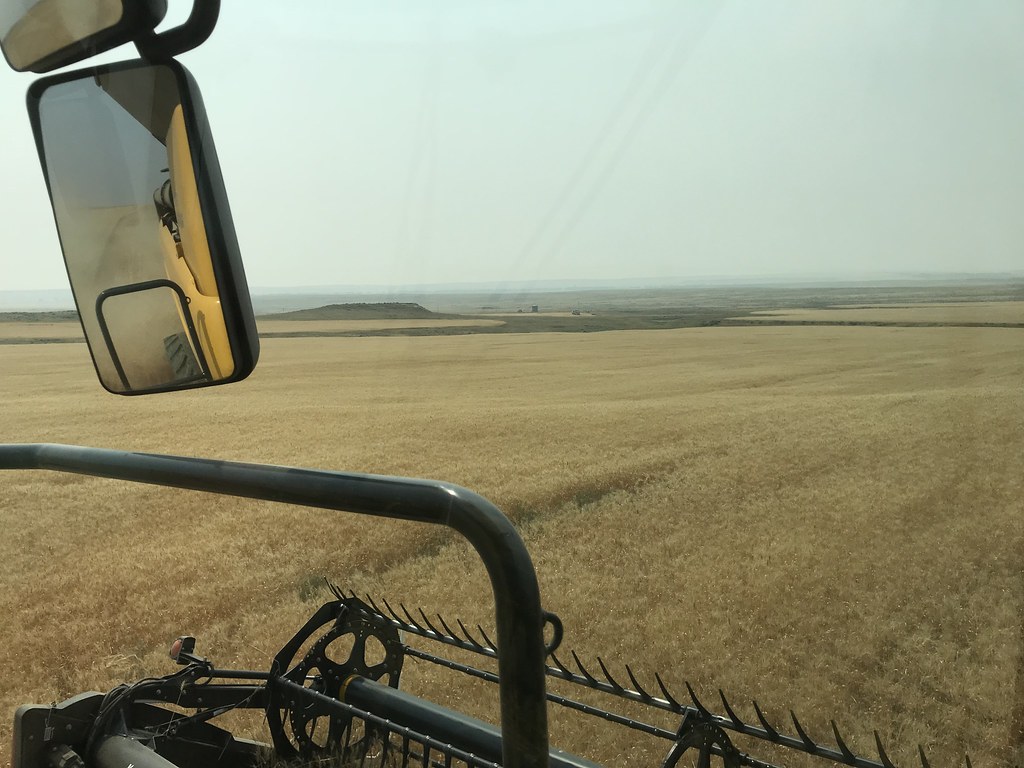 Just to the right of that butte, you can see the bin. It was pretty handy having it so close! 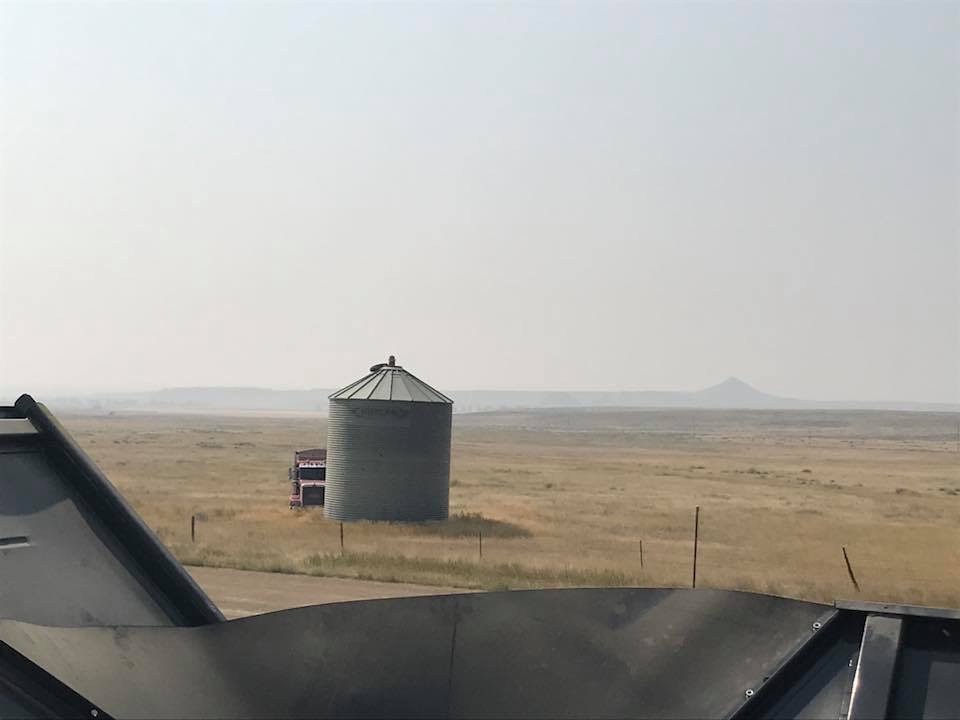 The wind has been blowing in smoke from all the wildfires in the west. It was really thick on this particular day. The pointy land-form on the horizon is called Smoky Butte. It has been living up to its name.

The spring wheat we just finished cutting today looks like it will have an average of 40 bushels per acre. And, we found out the protein from this particular field was 14%. These stats aren’t as easy to come up with when you don’t make a trip to the elevator or see a scale ticket.

So, as I said, we moved to customer #4 late this afternoon. Things were going quite well until the cutter bar decided to break – again. The last time it happened was on Saturday. You know, the 108 degrees Saturday? I honestly believe the temperature in the field that day was more like 120 degrees. The humidity only at 8%. I literally felt like we were baking in the sun as we were fixing the broken cutter bar with a splice kit made specifically for such a repair. I can typically take the heat but on this particular day, it got me. (Guess I’m not as tough as I think.)

I was standing there in front of the header trying to be the help Jim needed to get the job done. I felt my heart start racing, I got light-headed and sick to my stomach. I thought maybe I should get in the shade for a minute or two. The only shade was the combine but I was able to catch a little breeze and cool down. I had never felt like this before. I’m also a person who can out-sweat anyone. I wasn’t sweating. I think my thermostat must not have been working that day. An hour or so after the break, we were back in action and I was feeling 100% again.

It broke again and I took pictures to share with you…but I deleted them. Dang it! Well, not all of them. This time, we didn’t mess with a splice kit. We pulled out the new cutter bar from the storage area on the header and replaced it with the broken one. It took about 15 minutes. The whole time we were doing this, I was thinking…why didn’t we just do this on Saturday?

The broken bar is the original one and has seen quite a few acres through it, including soybeans and lentils. I bring this up because the header sits directly on the ground when it cuts these crops – flexing and bending as it follows the contours of the ground. Jim described it like bending a piece of wire over and over again. After so many bends, it finally breaks. 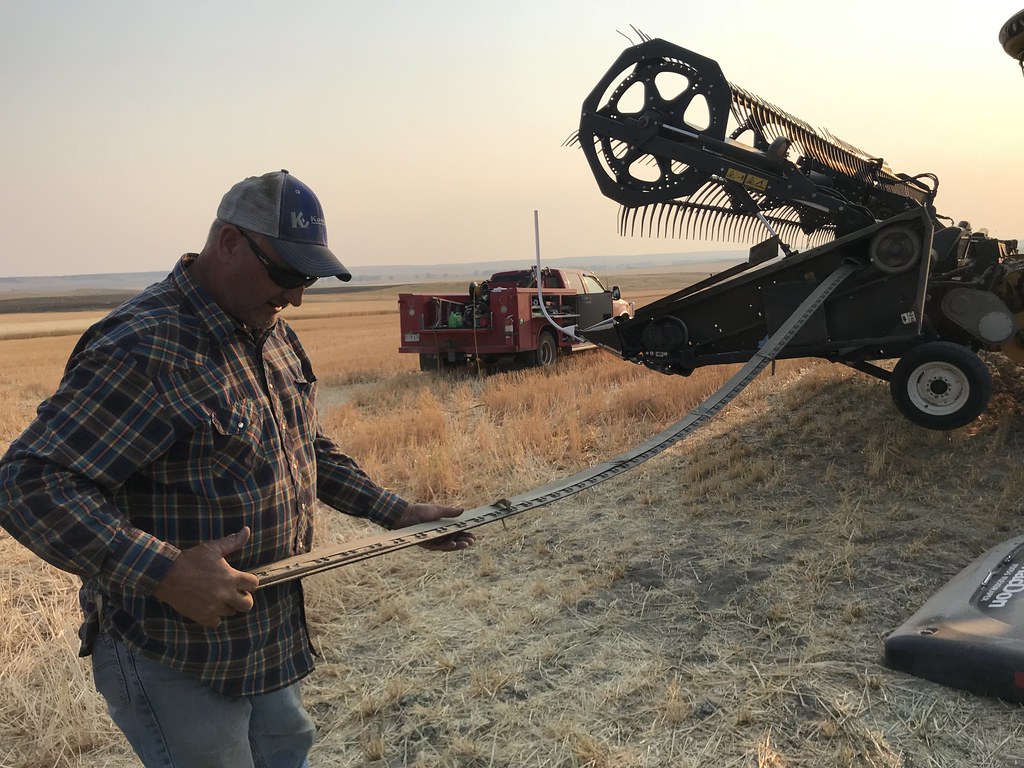 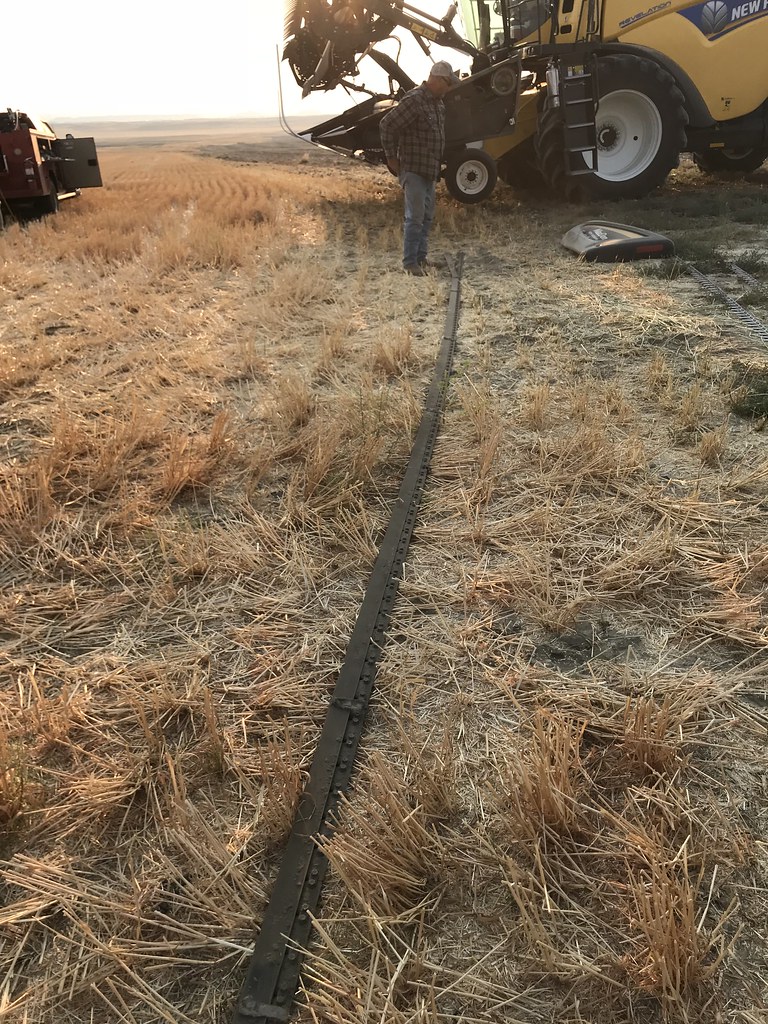 We had to remove the plastic protective covering before we could slide it into position. 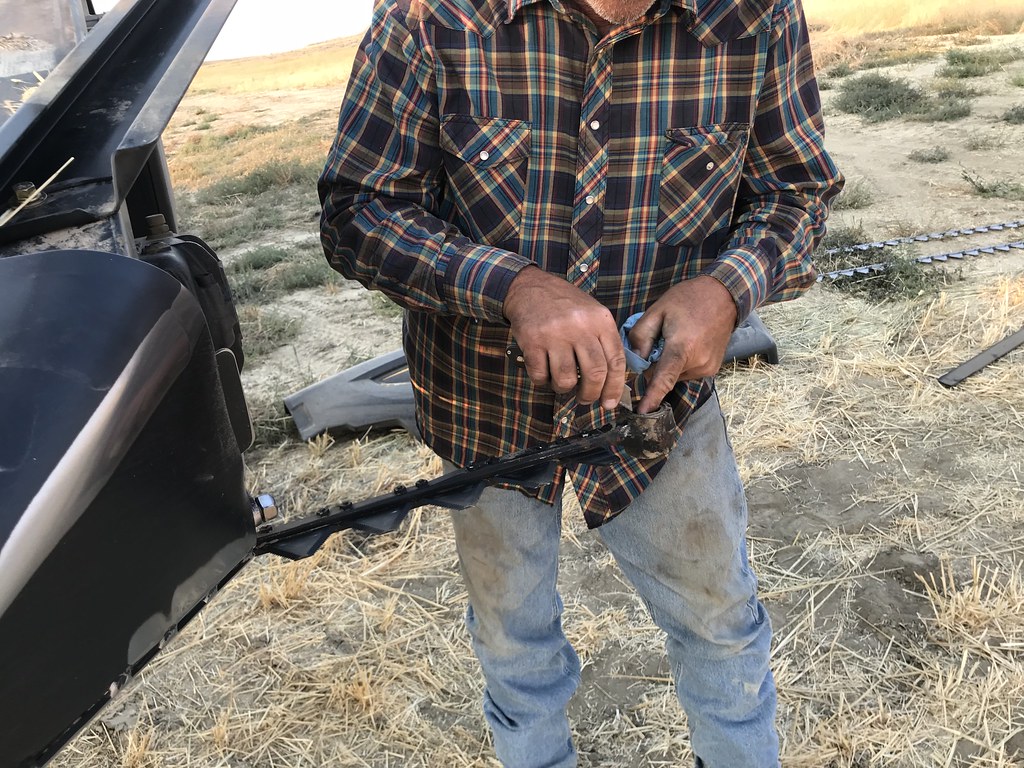 Adding grease before the final steps were completed.

We’re good to go now. We should be finished with the acres we came to Jordan for on Friday – just before the predicted rain. And everyone is hoping for rain here. It’s horribly dry. And then what? Guess we’ll have to wait and see…the adventure continues! 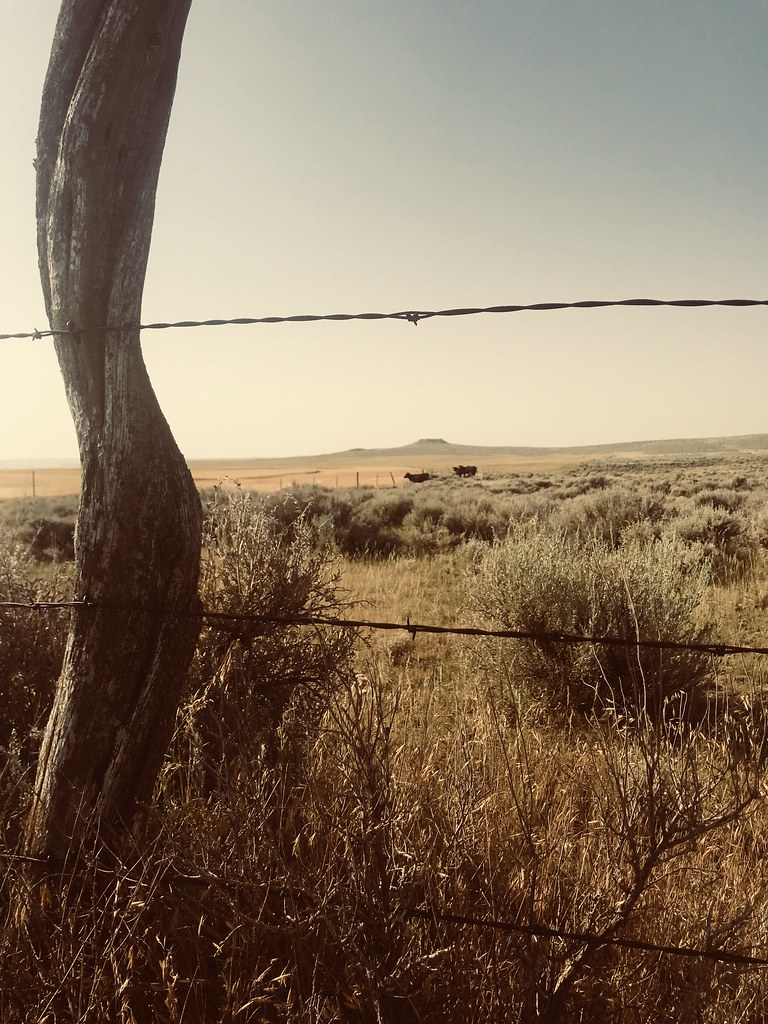 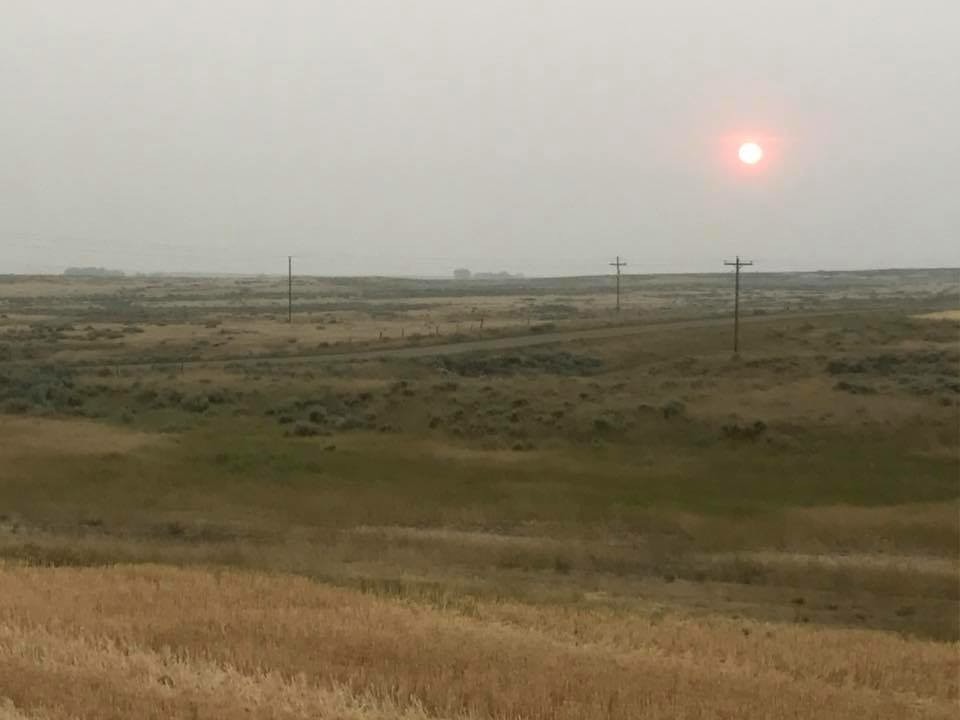 The day the smoke was the thickest, it got dark very early and the sun turned red. 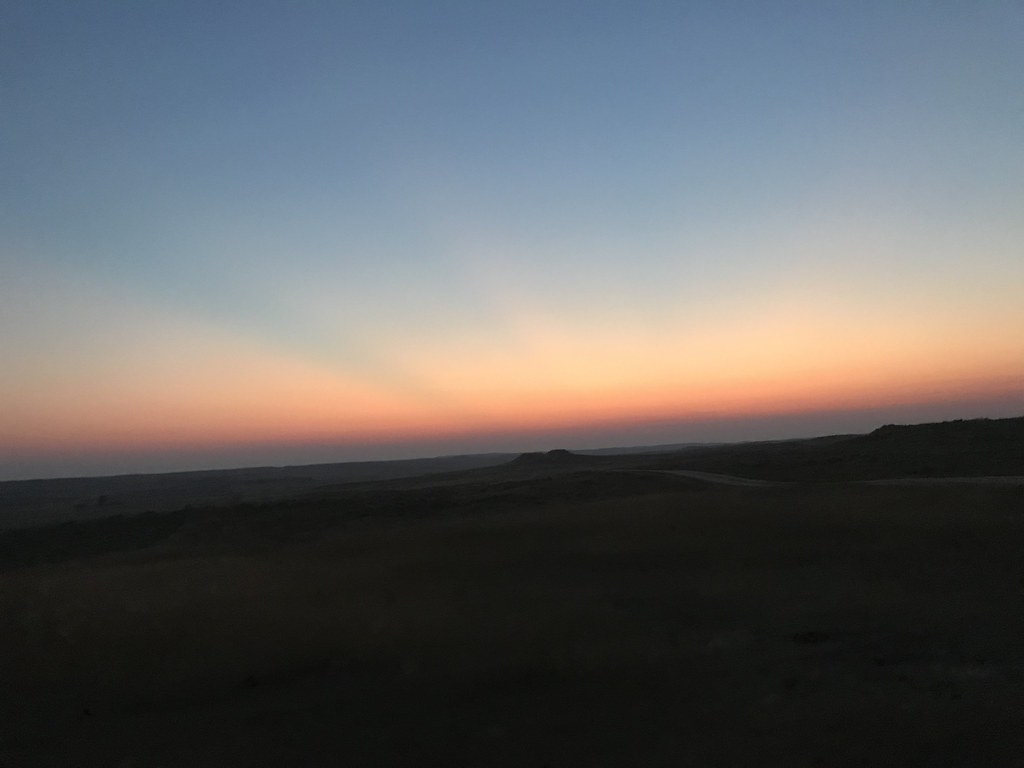 You KNEW there would have to be a sunset picture!