All Aboard Harvest | Tracy: Wanting to make a difference
17990
post-template-default,single,single-post,postid-17990,single-format-standard,qode-quick-links-1.0,ajax_fade,page_not_loaded,,qode-theme-ver-11.2,qode-theme-bridge,wpb-js-composer js-comp-ver-5.4.7,vc_responsive

Tracy: Wanting to make a difference

Garden City, Kansas – It had been in the works for a while. I received an email from Michael with the Oklahoma Baptist Homes for Children (OBHC) telling me they wanted to come visit and were willing to come as far as Garden City again.

I was excited to receive the note and even more excited when Michael told me Garden City wouldn’t be too far for them to travel.

The boys came last year and had to endure a very warm day and a combine breakdown. They were expecting to see a combine in action and taking turns in the machine. They ended up seeing real life – equipment breaks down and hydraulic fluid must be cleaned up. There were four of them last year and they were all troopers through the whole experience! The machine got fixed and was running again before they had to head south for Oklahoma.

This year’s visit wasn’t going to include Michael. He was, however, sending Rick Choate with a couple of boys from the Boys Ranch Town (Edmond, OK). They wanted to come on Monday, July 8. I sent an email to Rick and told him there was rain in the forecast. I didn’t want them to come all the way from Edmond to see a combine sitting in a muddy field.

A text was sent letting Rick know we wouldn’t be going out to the field right away on Monday morning, as planned. I suggested maybe he could take the boys to the zoo to kill some time. I would text him again when it looked like we would be making our way to the field.

It was about 12:30 when we met at the truck stop. Rick, Sergio and Gabriel followed us as we made our way to where the combine was sitting.

Those first couple of minutes after meeting someone new are always a little anxious. But it didn’t take long and I felt like the connection was made with Rick and the boys. Jim encouraged them to go ahead and climb the ladder to the top of the combine…”but be careful”! He followed behind them and started explaining some of what they were seeing – the engine, the grain tank and the bin extensions. 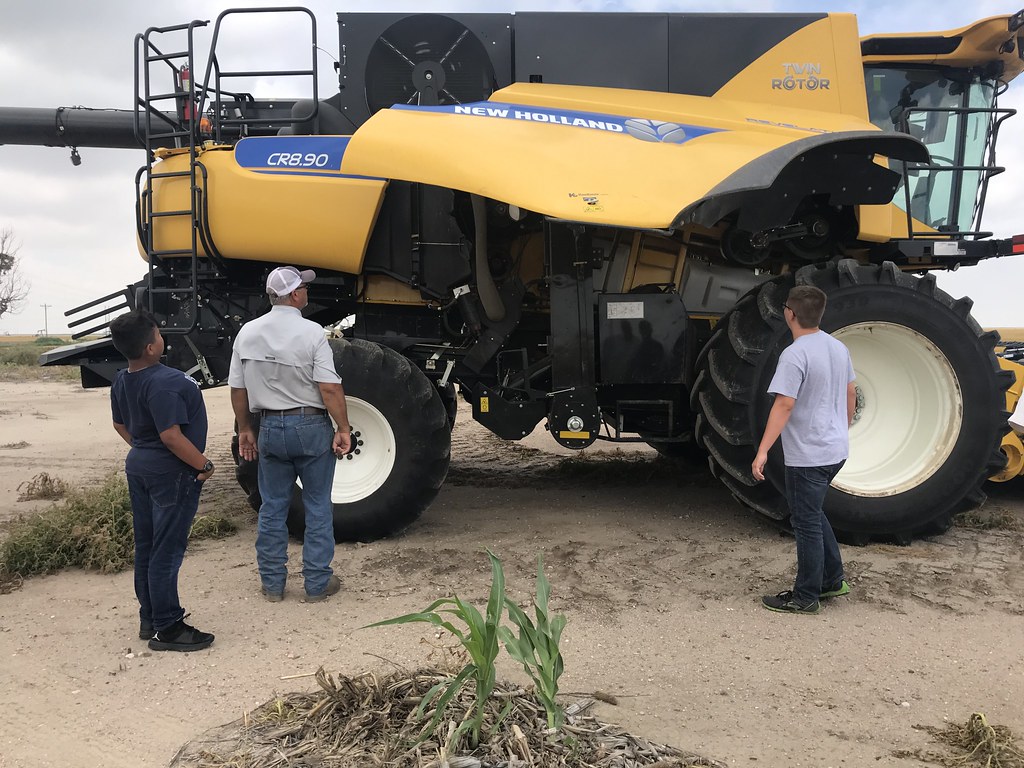 Shortly after arriving, the boys were ready to see what this big yellow machine was all about. 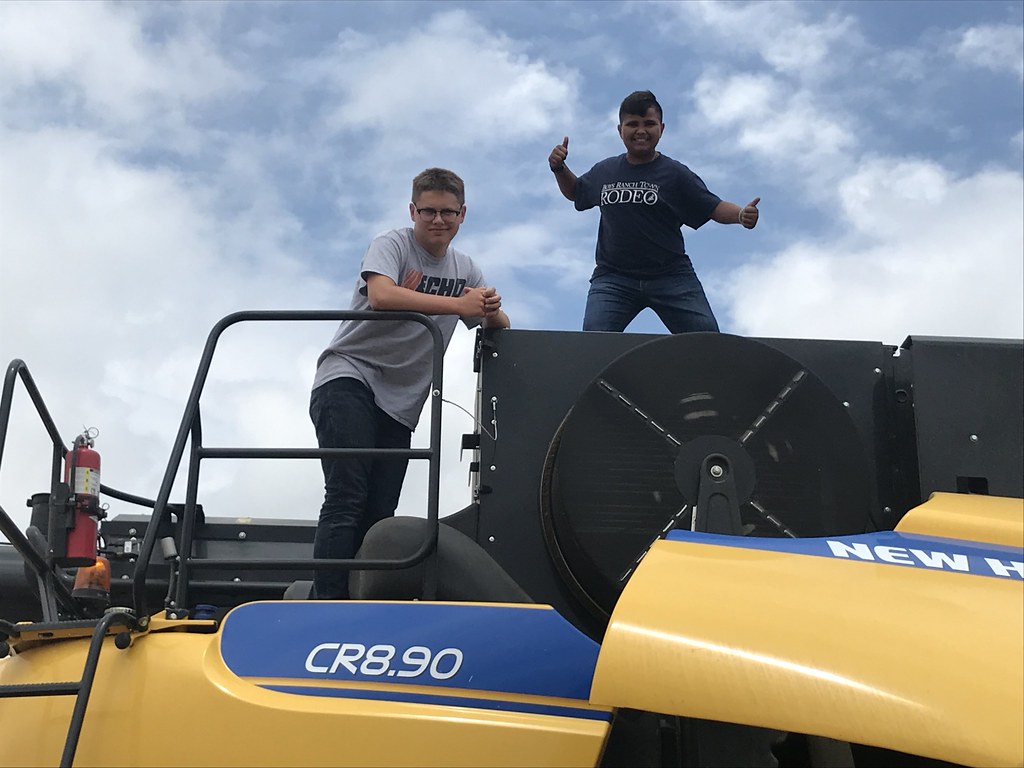 That’s Gabriel on the left and Sergio showing us his enthusiasm! 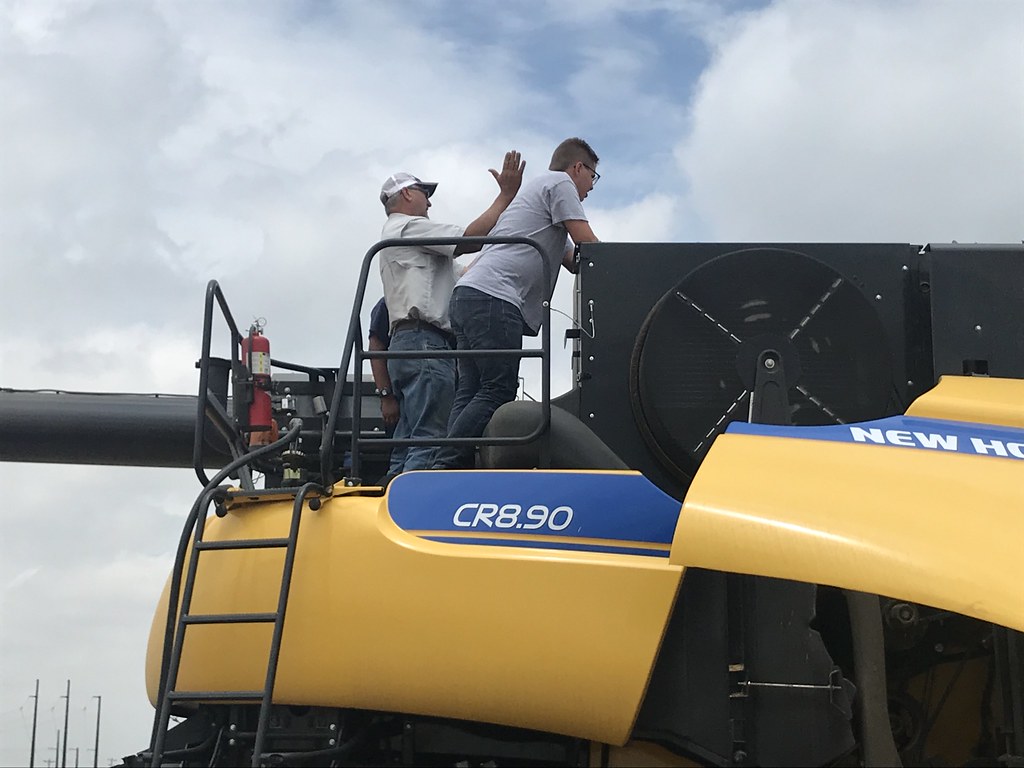 Jim explaining to the boys how the bin extension “wings” open and close.

Gabriel thought it was pretty interesting for about 15 minutes and then climbed back down the ladder and got in the pickup to continue reading a book he had started earlier. Sergio, however, was very interested in learning all he could about the combine and was ready when Jim asked him if he wanted to ride along to the next field.

The machine was parked near the field which had been finished the night before just as the rain began to fall. The plan was to move it to our next field and test the moisture.

After arriving to the new field, a quick circle through the field told us we wouldn’t be cutting wheat that afternoon. The moisture was 20%. 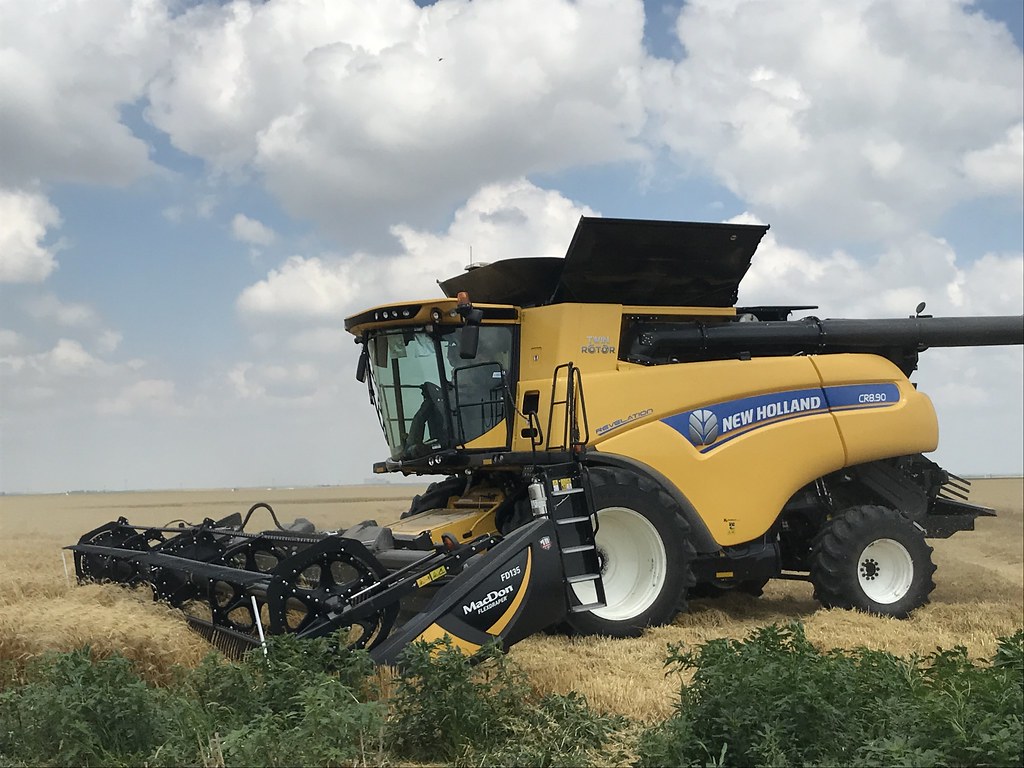 Jim and Sergio making the test cut only to find out the machine would have to be parked.

The combine was parked and the boys were told they could climb into the tank and take some wheat back to Oklahoma with them. They scrambled for a couple of grocery bags and an empty water bottle they knew were in the pickup. Both boys had fun playing in the wheat for a few minutes. Who doesn’t remember climbing up the side of a grain truck and jumping in the grain as a kid? 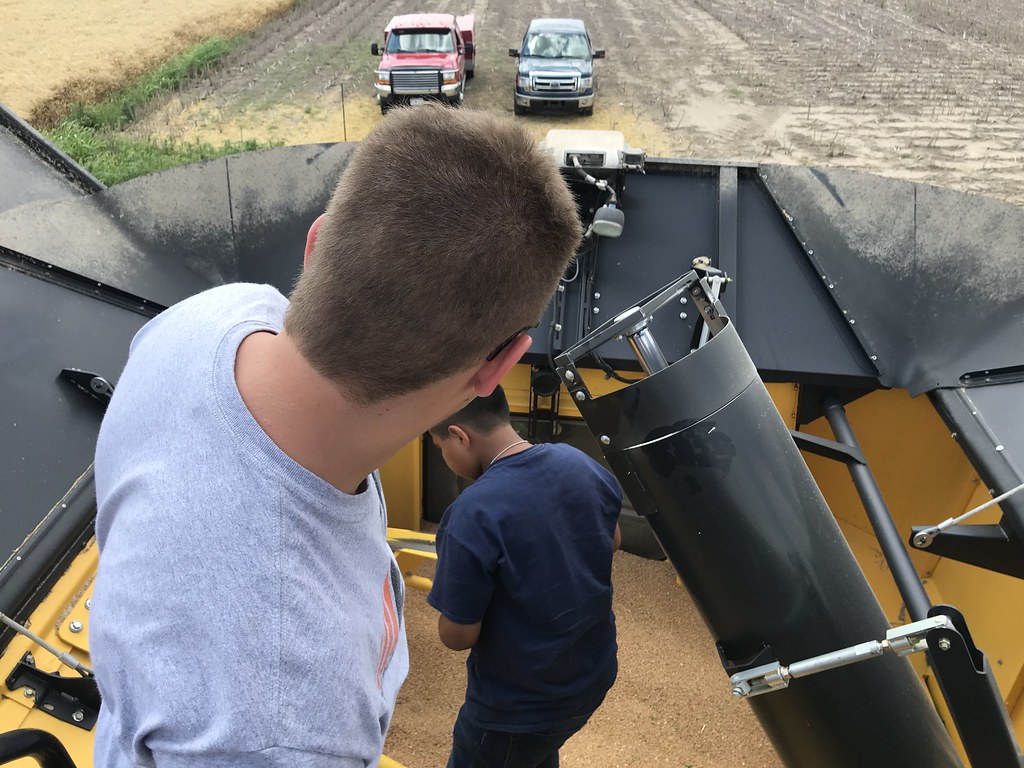 Filling the bags and water bottles with grain prior to the trip back home. 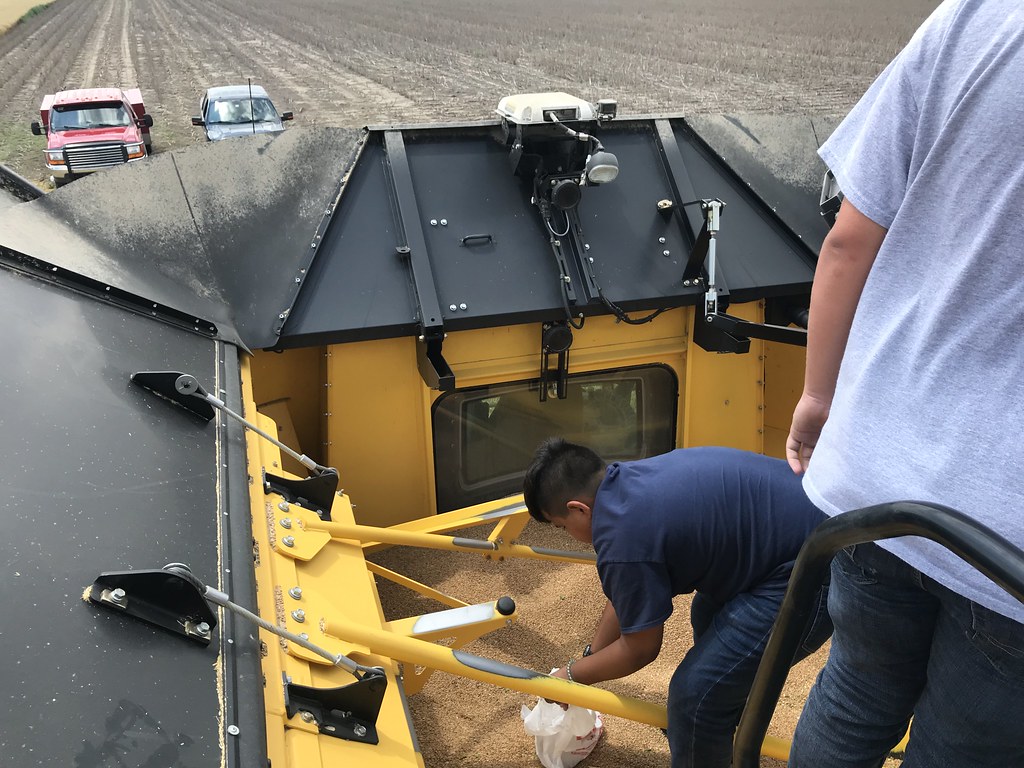 Playing in grain is just FUN! And, of course, I had to tell them how to make “wheat gum”. 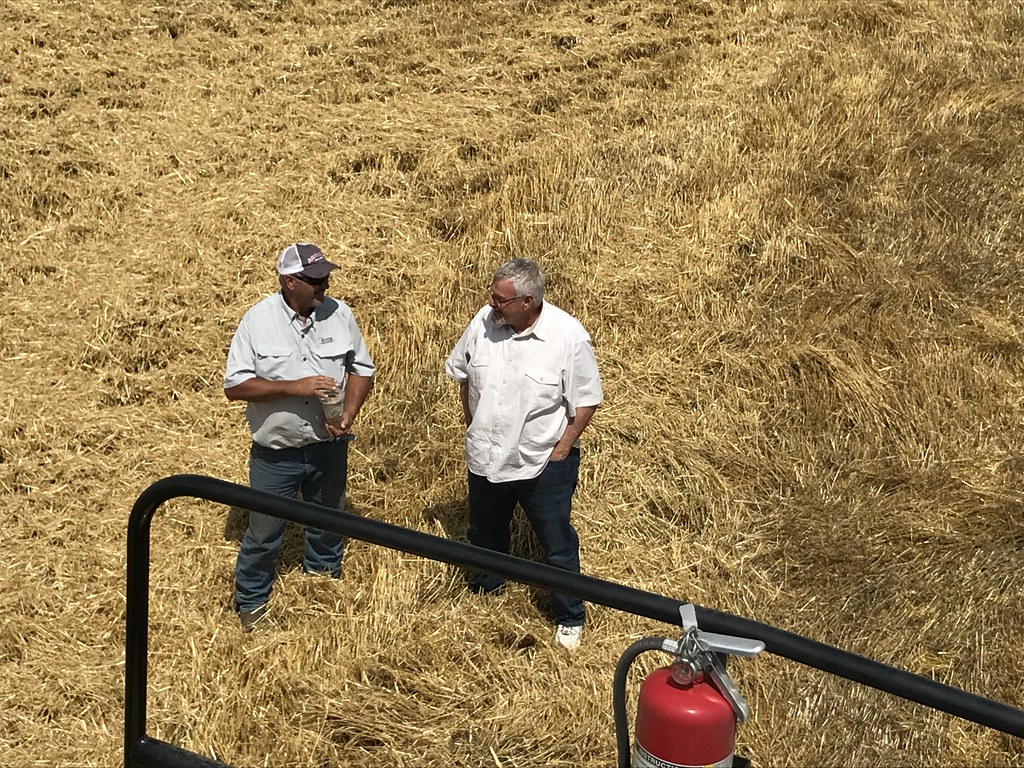 Jim and Rick discussing who knows what while the boys and I were playing in the wheat. 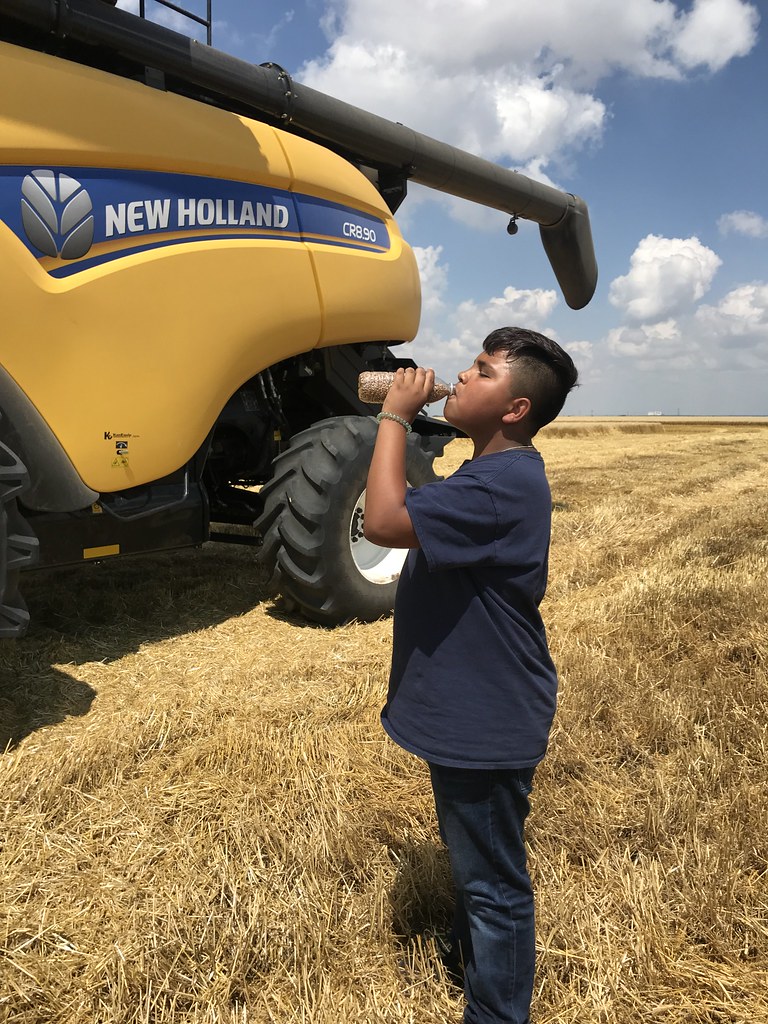 Sergio taking a “drink” of wheat.

The visit was very short but it was a good one. I felt like I had the two previous years after they had been to the field. I just wanted to spend more time with them. I am certain that if I were a resident of Oklahoma, I would find a way to become more involved with this program.

Seriously, if you’re looking for a way to make a difference in a child’s life, please consider donating to the Oklahoma Baptist Homes for Children. Everything they do for these kids are done with donated dollars. They are a non-profit ministry who does not charge for its services and does not accept government funds. There are many different ways to make a contribution. One, though, really fits the agricultural community – The 10 Acre Challenge.

“Donate a portion of what you are blessed with to children and families at OBHC. It doesn’t matter what the crop is or how much it produces per acre – everything helps.”

These people are changing lives. They’re giving boys and girls an opportunity they may not have otherwise.

Laura (High Plains Harvesting) wrote an exceptional post about her visit with OBHC in the field. She explained how the program works and what they’re all about so well. Please take the time to read it.

I am honored to have been given the opportunity to share a few hours with Rick, Sergio and Gabriel. I hope they took something away from their visit that will stay with them for the rest of their lives. You never know how or if you make a difference, you can only hope you do. 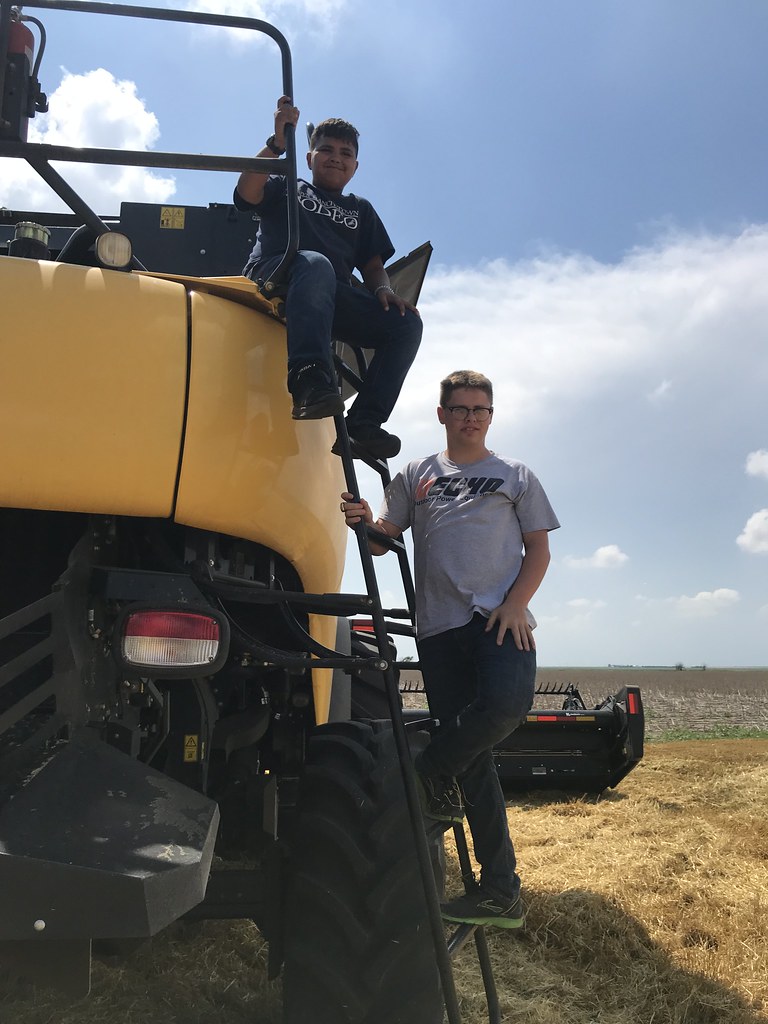 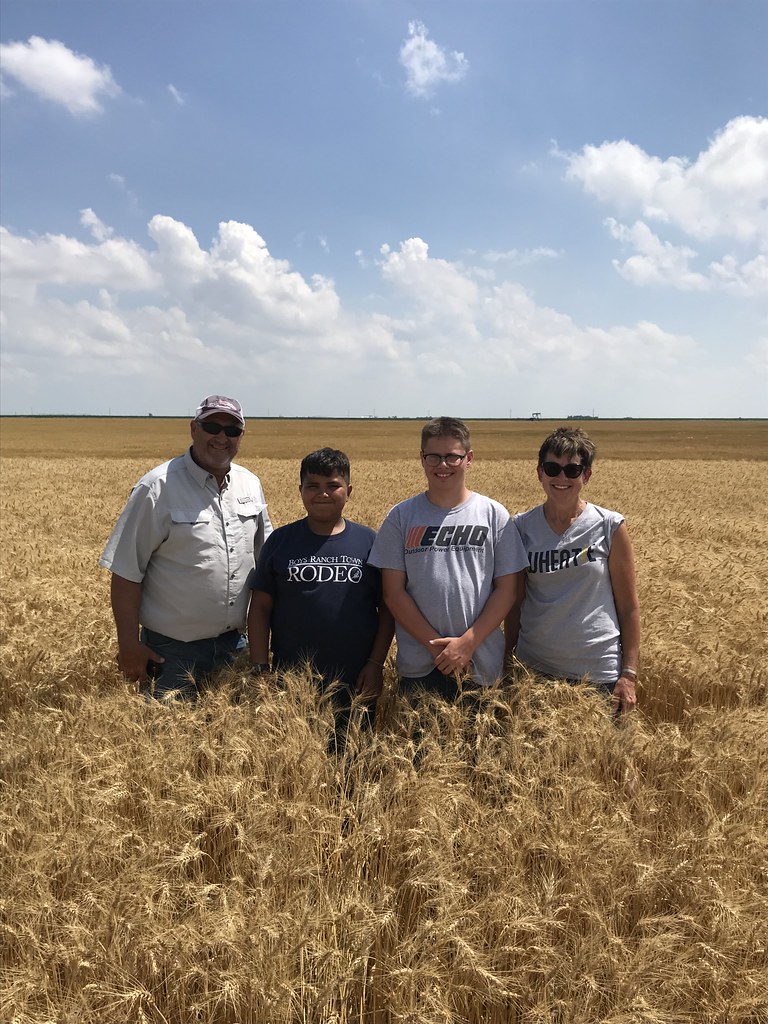 Jim, Sergio, Gabriel and Me. 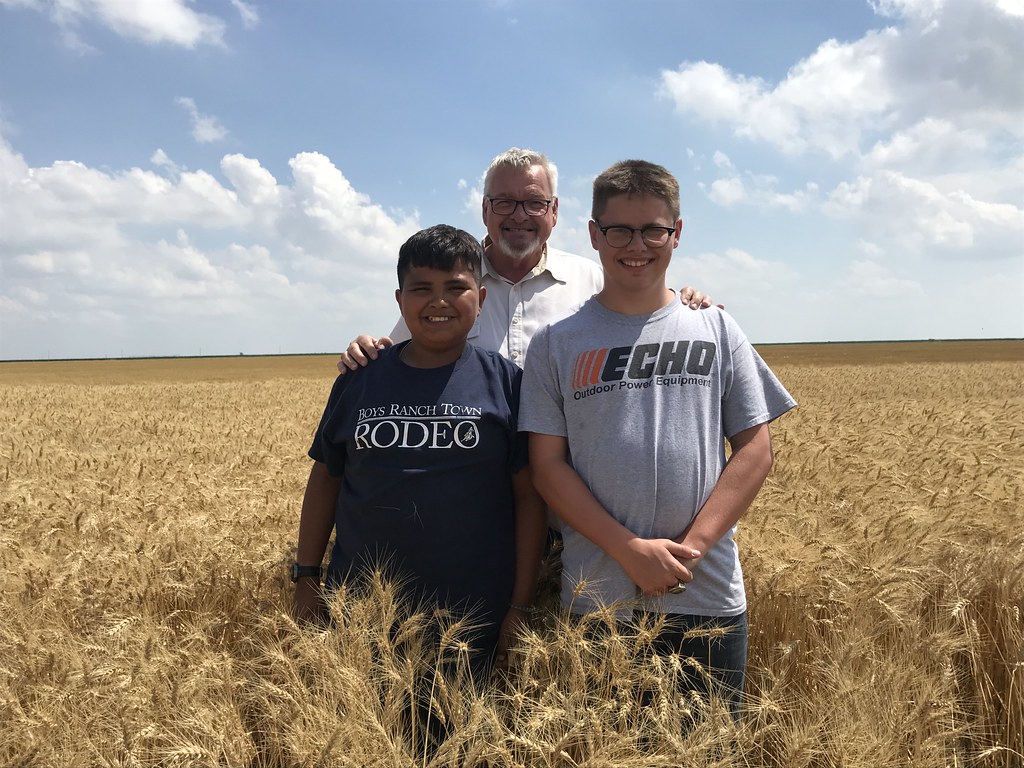 Sergio and Gabriel in front. Rick Choate is behind them. 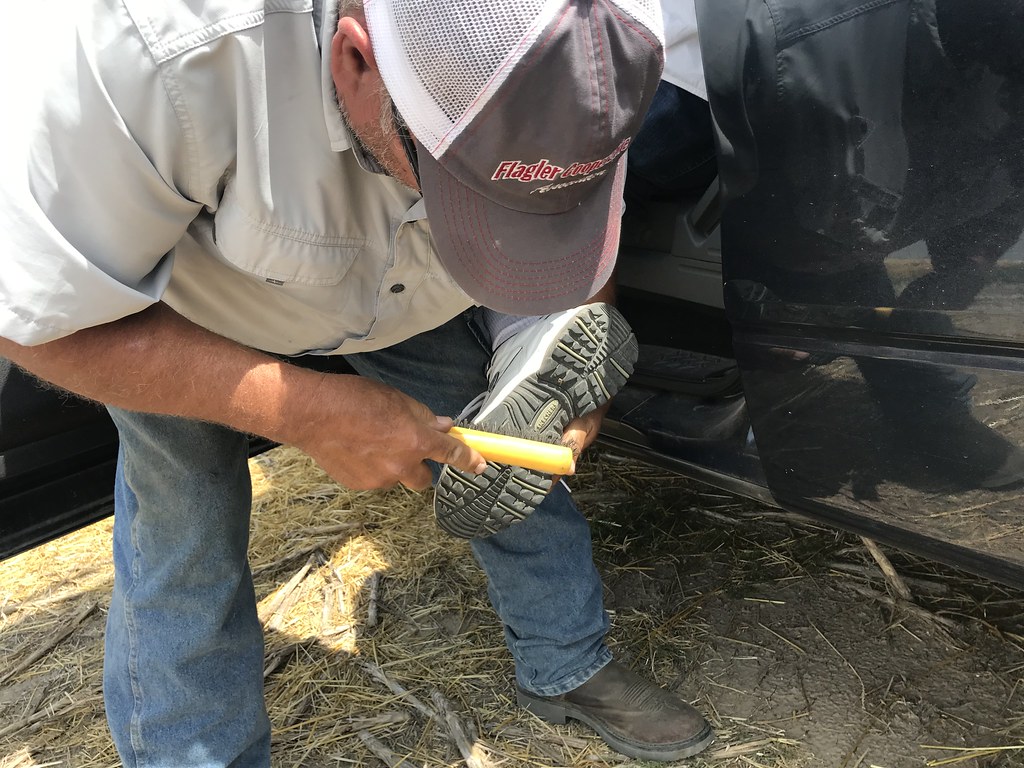 Now this is true service! The ground was covered with sandburs. So, before Rick got in his pickup, Jim took a wire brush to the bottom of his shoes so he wasn’t taking any of them back to Oklahoma with him. 🙂

I certainly look forward to my next visit from the OBHC! And I will pray for these boys and their futures.

Until next time…”The King will reply, Truly I tell you, whatever you did for one of the least of these brothers and sisters of mine, you did for me.” Matthew 25:40