All Aboard Harvest | Tracy: A small part of something so large
18132
post-template-default,single,single-post,postid-18132,single-format-standard,qode-quick-links-1.0,ajax_fade,page_not_loaded,,qode-title-hidden,qode-theme-ver-11.2,qode-theme-bridge,wpb-js-composer js-comp-ver-5.4.7,vc_responsive

01 Aug Tracy: A small part of something so large

Tribune, Kansas–We’ve passed through on our way north and I’ve often wondered what it would be like to be a part of the Kansas harvest in this true harvest town.

There’s a Cenex on the intersection of Highways 96 and 27. We’ve stopped in the past to fuel up vehicles or grab a cold drink. All the while I’m quickly doing what needed to be done, I’ve often looked at the trailer court with awe and wonder. I know the number of harvesters who used to come here compared to the number today is much smaller. However, to be a part of something that is in full-swing harvest mode on such a large scale has always been exciting to me.

You certainly see a lot of different types of loads stopping at this busy intersection.

I can now say we’ve been a part of it, although in a smaller tail-end-of-harvest way. And even though most of the harvesters had either left or were in the process of leaving as we pulled into town, it gave me a sense of being a part of what harvest used to feel like for me. Back in the early days of tagging along with my grandparents, we were in areas that other harvesters were at. It seems with our small operation, we just don’t see the larger harvest activity. 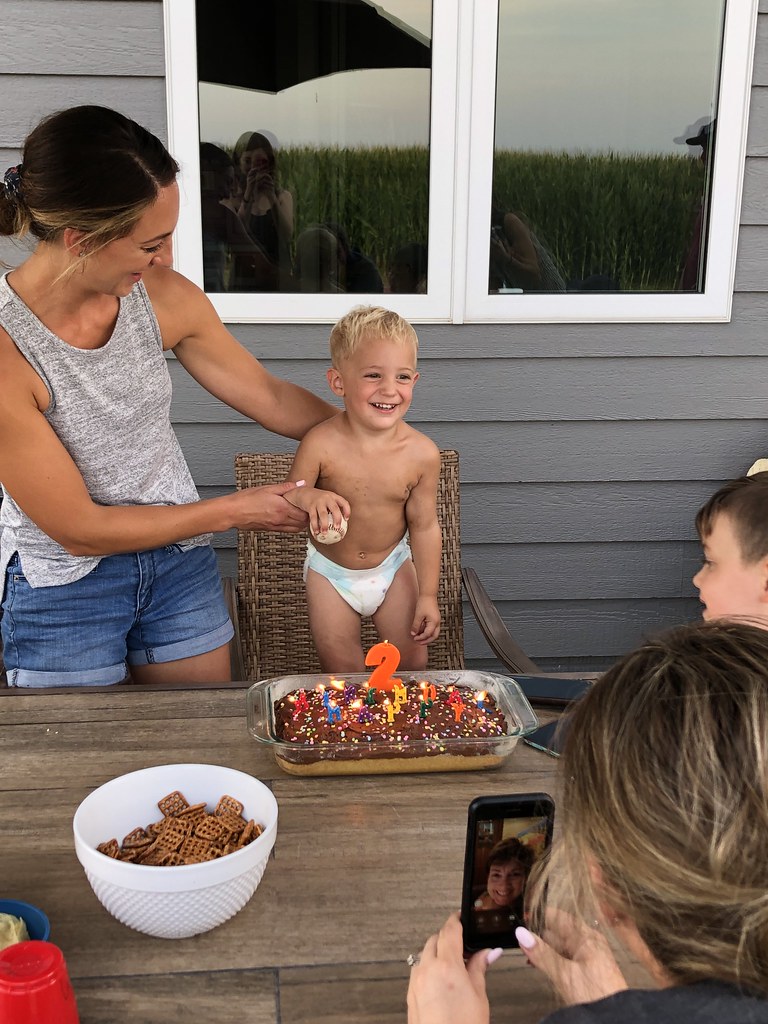 Ben turned two on July 24. His birthday party was July 27. Although I wasn’t there with the rest of the family, I got to be a part of blowing out his candle via Facetime.

Someday, maybe we can actually be here when harvest is in its peak state of activity. You truly feel like you’re part of something when there’s other harvesters doing what you’re doing. And the town is abuzz with harvest activities.

From here on out, every time we go through this intersection, I will look over at the “cutter camp” and I’ll think about being a small part of something so large.

In my previous post titled, “Faith and Perseverance,” I mentioned that we had lost acres in Colorado due to hail. We would have gone there after Garden City but came to Tribune instead.  Remember this paragraph?

While still laying in bed the next morning, I remembered something I had read in a recent devotion. That something was remembering to give God thanks even in the worst of times. Seems weird, doesn’t it? By giving Him thanks for the trials from the get-go, we are letting Him know we have faith in His working a bad situation into a good one. Right then and there, I thanked Him for losing those wheat acres because I know He’s going to work this all together for His glory. My job will be to stand back and watch how all the pieces come together. My soul definitely felt more at peace at that moment than the previous afternoon.

God had it all worked out for us before we even needed to know what the next step was … thank you for the many blessings we all too often take for granted. 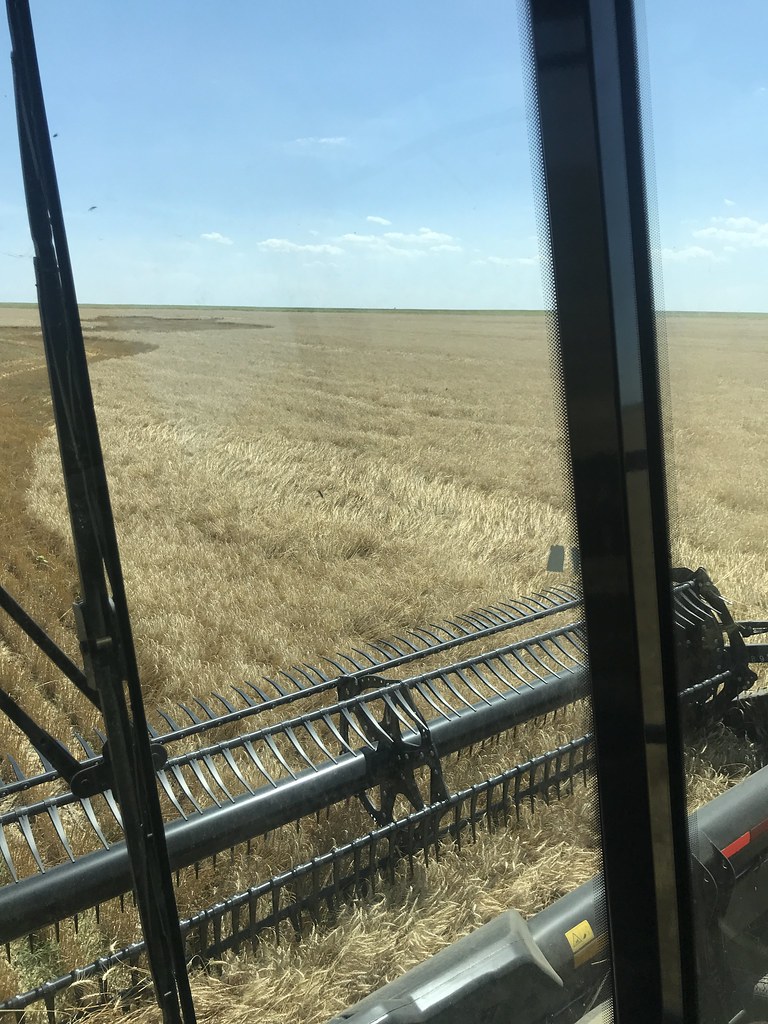 Slow and steady wins the race. The heavy crop was lodged and took some patience to cut. 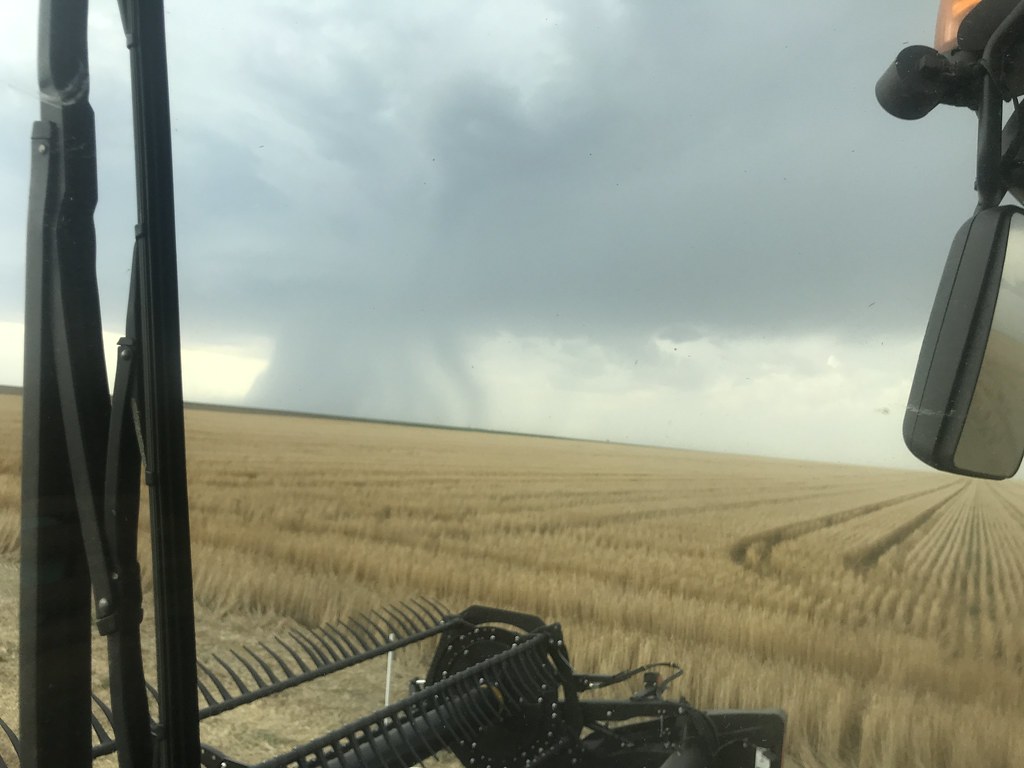 If it was the race against the clouds, I lost! Cutting the second field took another afternoon to complete because I played “the cloud” game and lost. 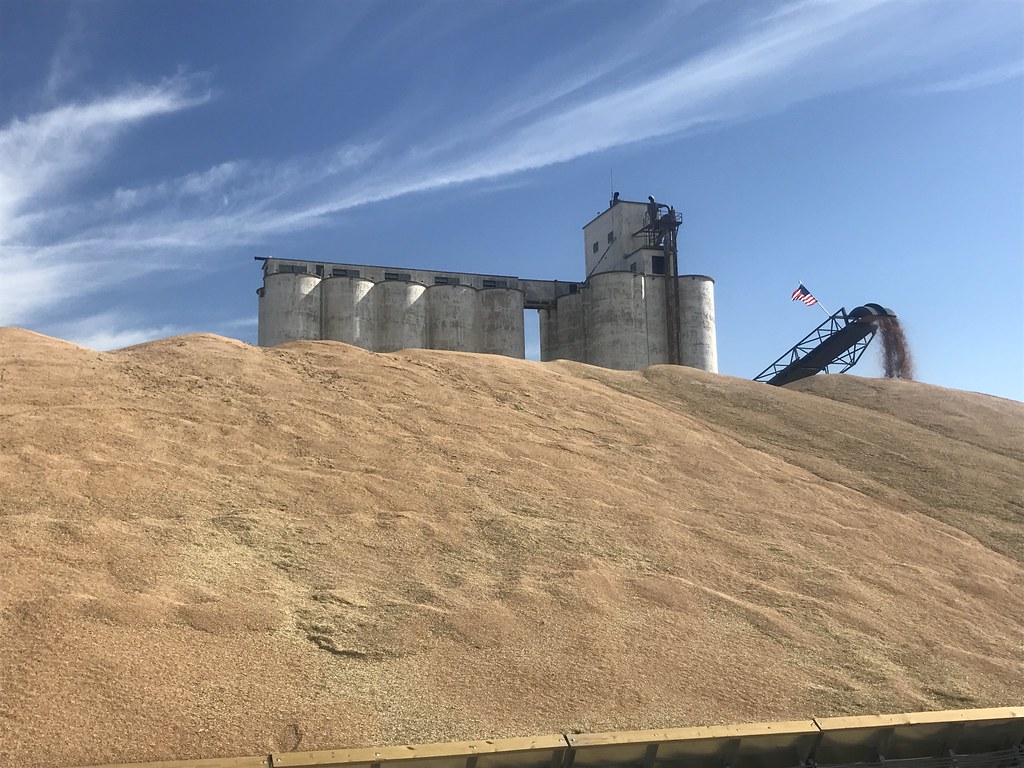 One of three mountains of wheat at the Horace, Kansas, grain elevator.

Video credit goes to Jim. This is the Pete being unloaded at the bunker in Horace.

Early on, I decided I would try to do a daily live video while we are on the road. Some days are much more exciting than others but it’s been a lot of fun seeing what questions some of the viewers have. It’s one way I feel like I can actually educate some of our followers on the Zeorian Harvesting Facebook page about what the heck we do. Maybe in some small way, I am teaching others about the industry who wouldn’t know otherwise.

One of the questions recently asked was, “With all the rain the Midwest had this spring … did it help or hurt the wheat?” I explained the rain and cool temps experienced this spring helped the western Kansas wheat farmer. Anyways, it helped those who were able to actually get their wheat planted last fall. I’m certain it helped farmers in other states too (Colorado and Nebraska). It caused a lot of stress, however, in Texas and Oklahoma because of the amount of mud experienced by the harvesters. 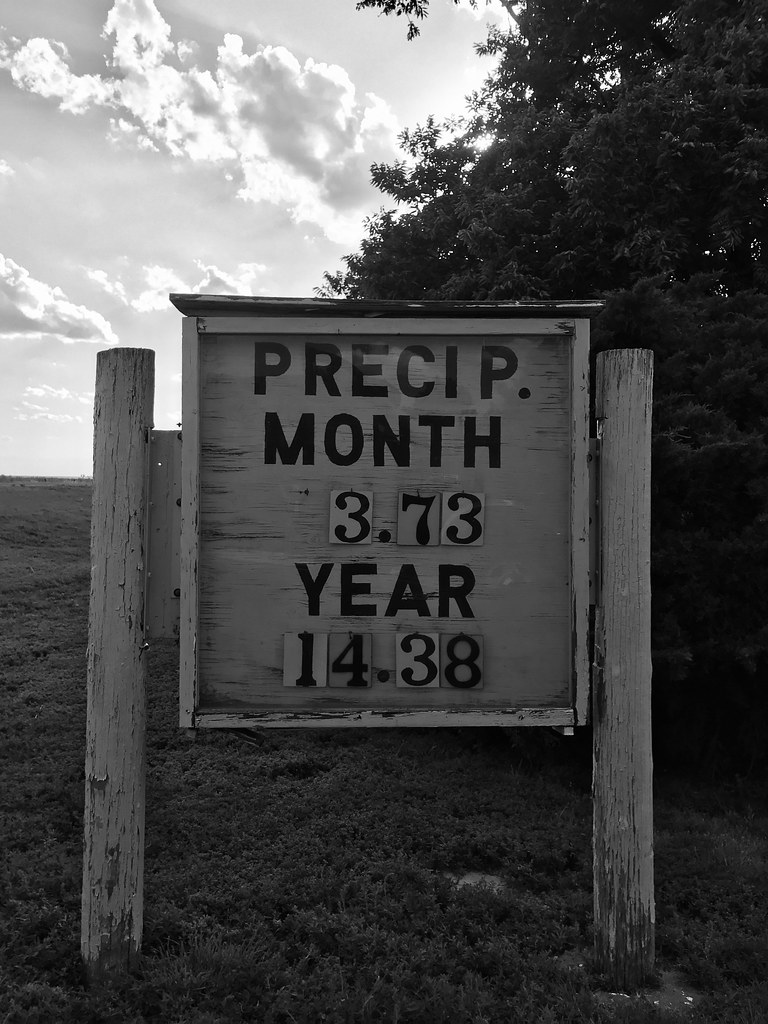 The average annual rainfall for Tribune is 17.86 inches. Unless they go into a severe drought, I’d say they will have an above average amount of moisture for 2019. 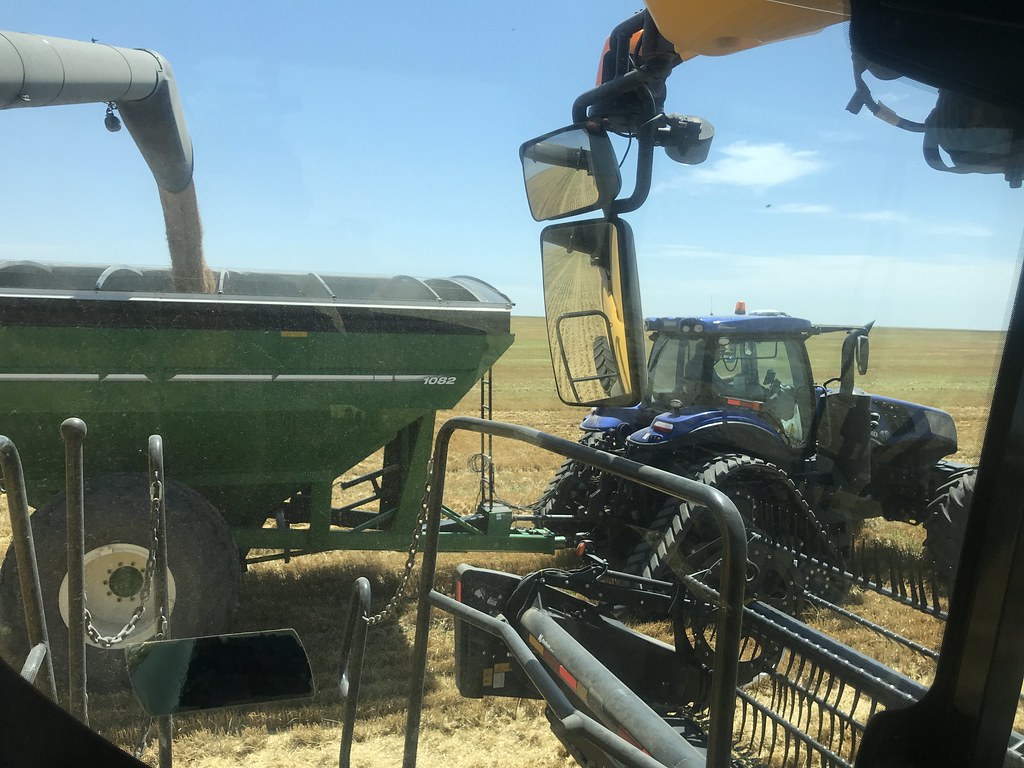 Because the field was yielding such a high number of bushels, the trucks couldn’t keep up. The farmer we were helping sent over one of his tractors and grain carts. I felt like a “real” harvester that afternoon! Poor Michael (tractor driver) was used to being in a field with five combines. There wasn’t near as much activity with just one.

And … it didn’t do the corn and soybean farmers any favors. The rains caused late spring planting for those who were able to actually get their acres planted. For those who weren’t able to get in the fields, it will cause a very slim (to none) fall harvest. This will affect our industry, as well. As I’ve said before, no crop–no income. 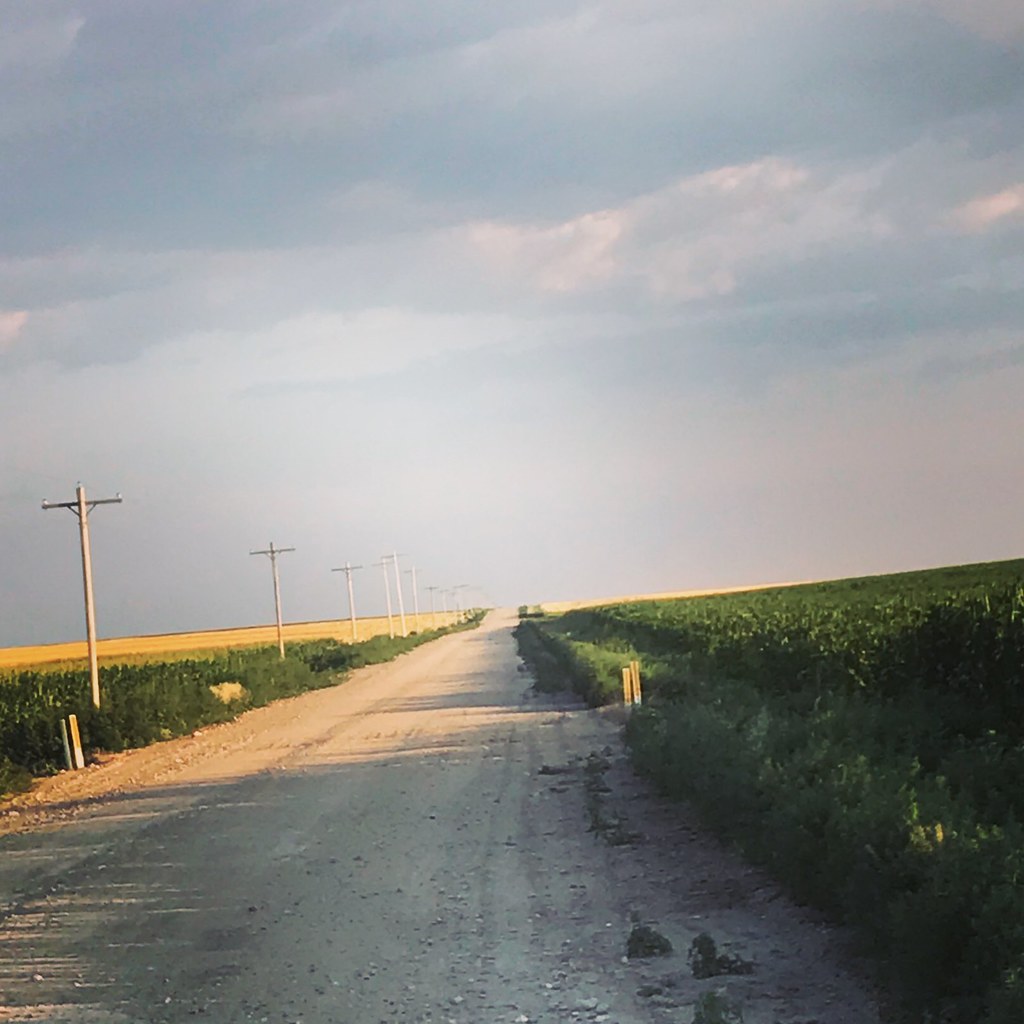 We’re in the process of cleaning equipment and catching up on maintenance that has been pushed aside because there’s been wheat to cut. Our intention is to begin the first of two trips to Jordan, Montana, on July 30. By the time we get everything moved to our final harvest stop, a week will have passed and we’ll have been up and down the same highways three times. I actually love making this trip. It’s just crazy to me that we’re already making our final move before home, home. 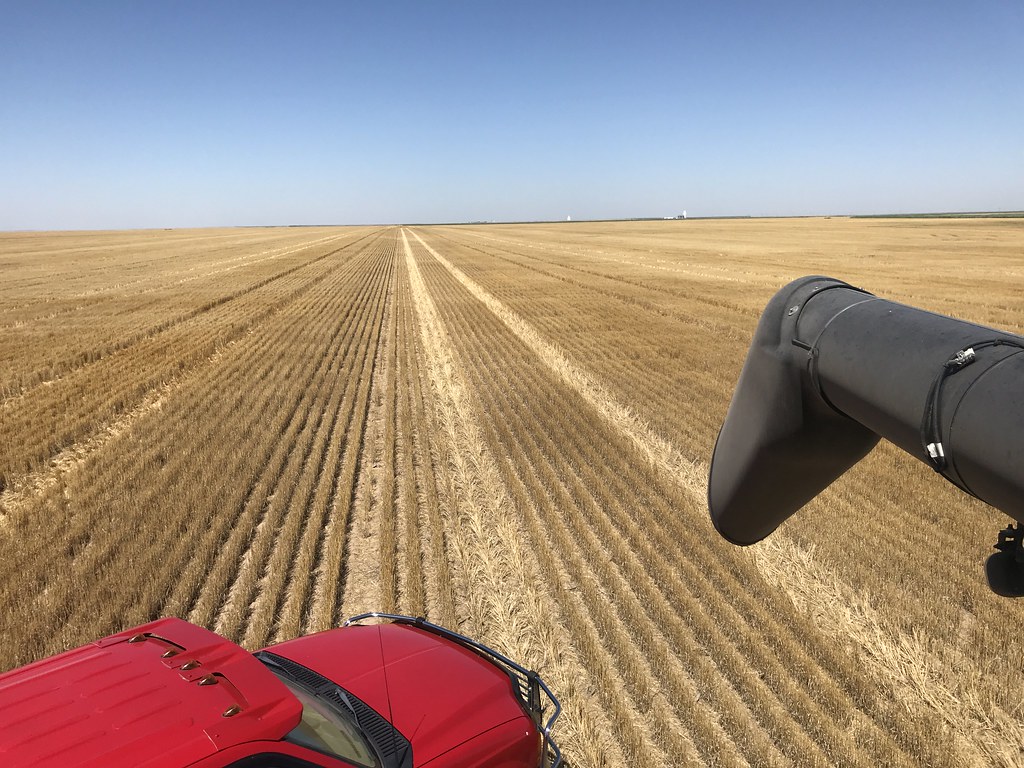 A cut field can be as beautiful as one with standing wheat. Maybe more so because the grain is out of the field and in storage. 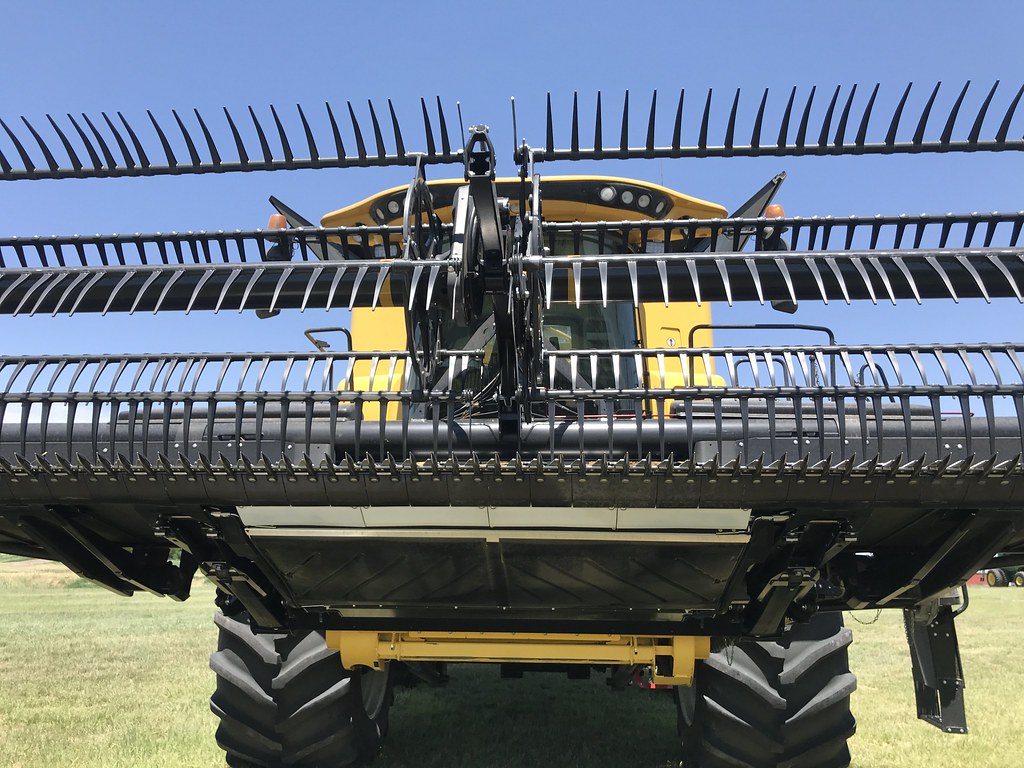 While we were cleaning the combine and header, I realized just how monstrous this combine really is. You just don’t see it when you’re in the seat looking down. 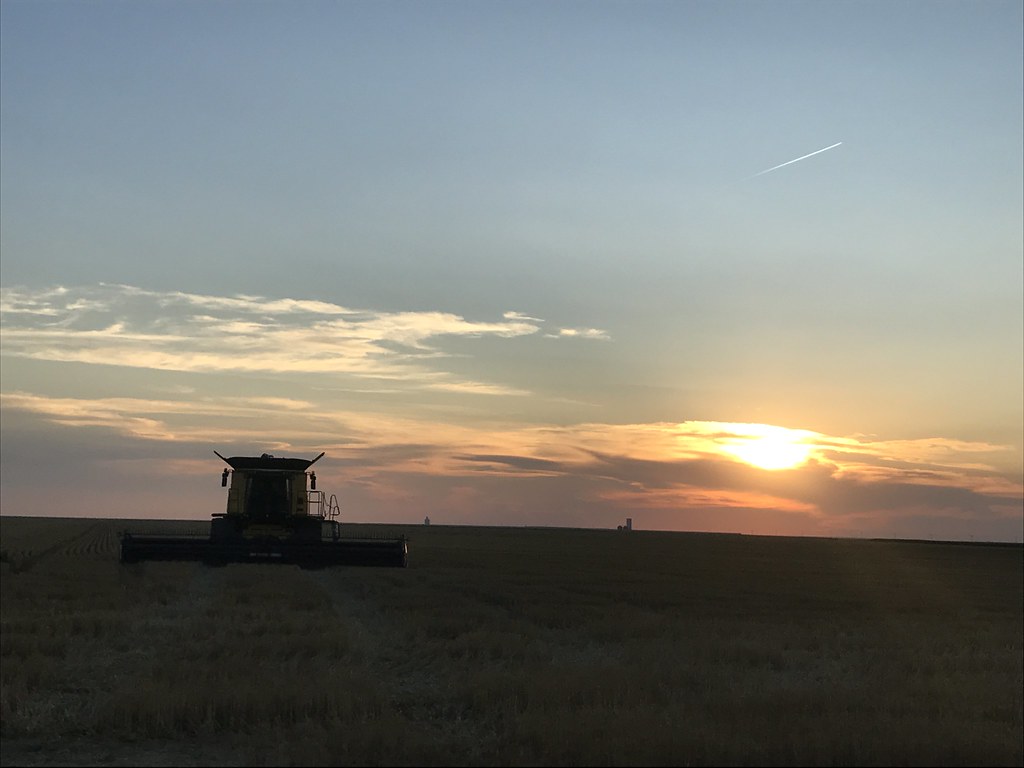 One of many Kansas sunsets experienced over the past month.

Until next time … “Raindrops and teardrops have two things in common. Both fall freely, and yield abundance. The former leads to abundant harvest and the latter, abundant mercy.”—Martin Uzochukwu Ugwu.