All Aboard Harvest | Shelbourne
305
archive,tag,tag-shelbourne,tag-305,qode-quick-links-1.0,ajax_fade,page_not_loaded,,qode-theme-ver-11.2,qode-theme-bridge,wpb-js-composer js-comp-ver-5.4.7,vc_responsive 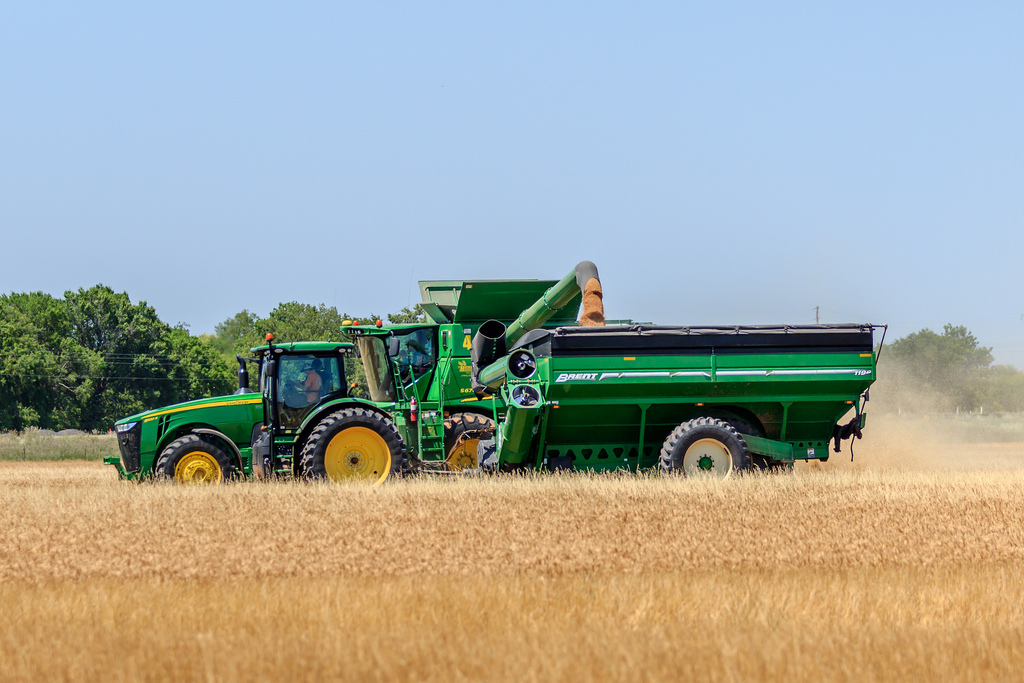 Texas - Harvest began for High Plains Harvesting on Memorial Day, May 28, this year.  Due to the crop situation down south, we took a partial crew.  Although we would have liked to have had the full crew present, we are thankful to even have...

29 Jul Laura: Rattle in the night

Posted at 13:30h in 2017, aawh, All Aboard, harvest, High Plains Harvesting, High Plains Journal, HPH, John Deere, Laura, stories, wheat by Laura Haffner 0 Comments
0 Likes
Share
Northeast Colorado - The other night Pieter had machinery issues so stopped in the field, got out of the cab, and hopped off the ladder. Immediately he knew something was wrong. Ryan said he was yelling over the noise of the combine about there being a snake. Ryan thought he was just imagining things as it would be hard to hear a rattle over the roar of the motor. Pieter kept yelling and pointing. When Ryan shined his light in the direction Pieter was pointing, sure enough, there was a rattle snake coiled up and ready to strike.
Read More

Hardin, Montana - Things can get pretty dry in Montana in the summer. That doesn't sound like that unusual because a lot of places get dry. However, it takes on a different meaning when you're dealing with some of the desolate areas that make up the state. There aren't always the square north/south or east/west roads every mile or so like you find in some parts of the plains. If lightning strikes, and a fire starts, it's not always very easy to fight because of the very remote, and often rough terrain. Same can be true for a fire started by harvest equipment. The fields in the part of the world can be very large, I'm talking 1000+ acres. If a fire starts and blows through a field, the consequences can be devastating and extremely difficult to fight. Crews are often driven from the field for rain, but at this stop, the crews have been asked to shut down when the fire risk seems especially high, which is completely understandable.  There are disastrous fires currently burning in the state.

Morgan County, Colorado - Ryan left several days ahead of us to get started in Colorado. I had several more days of paperwork and preparation before we left home again, so I was relieved to finally have it all done and hit the road late Friday morning. As soon as I hit top speed, we experienced what I would call a "major" vibration. I exited on the next road. Nothing was visually off, so I circled around and tried again... same thing. The kids thought is was hilarious and great fun. They were laughing and making the "aaaahhhhh-ahhhh-ahhhhhh" noise along with all the vibrating. I could feel my frustration rising. All the while, I said prayers of thankfulness that this happened only a couple miles from home. A few back and forth calls with Ryan, a few calls to local mechanics to see who could get me in last minute, a couple shakes at Wendy's to pass time with the kids, several laps around Wal-Mart and visits to the pet department to watch the fish, two plus hours later we were ready to roll again. Thankfully it seems that something had just gotten out of balance, and it was nothing more serious!

Tribune/Sharon Springs, Kansas - We just finished our job here in the Greeley and Wallace County area. To give you some perspective, last year we started around July 5, and this year we ended the entire job on the 5th. It's interesting how seasons can vary so much from year to year.

This was part of the area affected by the late season blizzard I mentioned in an earlier blog post. Most of the wheat was laid flat beneath the snow. And who would have thought, after all it's been through this year, it would survive and be a respectable crop.

Test weights here were in the high 50s. Irrigated acres ranged widely between 50-80+ bushels per acre. I guessed the reduction in yield was due to freeze damage but was told they suspected it was 10 consecutive days of heat at the end that effected the yield.  The irrigated results were a bit of a disappointment and just another example of a farm that tried to do everything right and was dinged by natural forces out of their control.  Dryland (non irrigated) acres were in the 50 bushel per acre range. In some places, it was as good or better than the irrigated, which is unusual.

Extreme Southeast Colorado - I have to admit. We entered my favorite part of the season as far as the travel route goes.  We are here on the High Plains. It's not that I don't like the other places we go. That's far from it. Each place has something unique and special to offer. It's just that this is HOME. The later part of my growing-up years happened here, as did some of my adult life. Ryan still has to hear about how he took me away from southwest Kansas when we got married, which I'm sure he really appreciates. My heart will always be where my family is, but the High Plains will always have a piece of my heart. In fact, I may be willing to move my heart back if anyone is willing to donate a nice little farmstead to my cause.